Ninth public reading kicks off the Fourth of July

PORTSMOUTH — A Philadelphia family somehow found itself spending the morning of the Fourth of July on the grounds of the town’s library, where the very document for which the City of …

Ninth public reading kicks off the Fourth of July 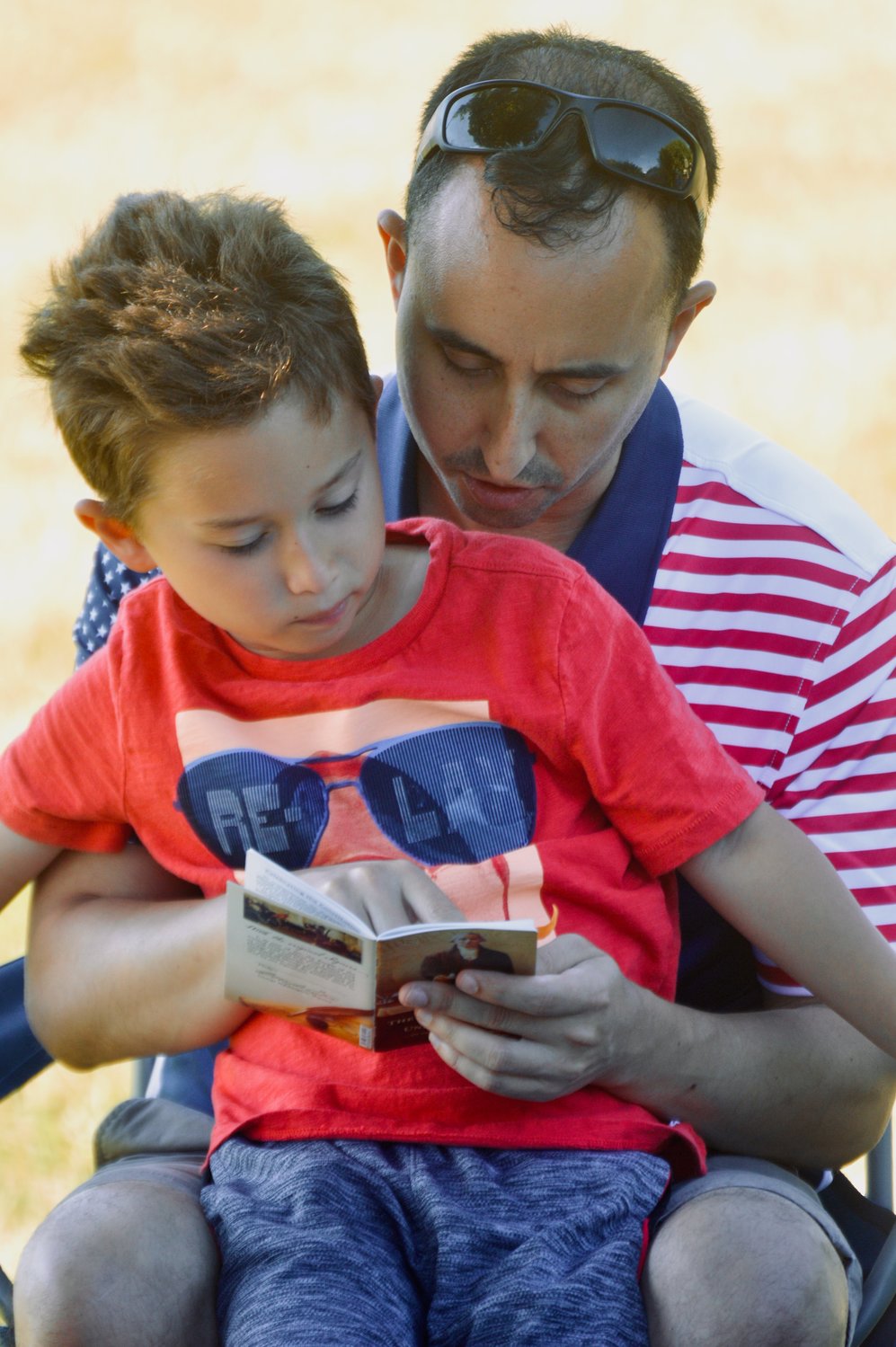 Jesse Shiner, 6, follows along as his dad, Garett Shiner, reads from the U.S. Declaration of Independence during an event at the Portsmouth Free Public Library that kicked off the Fourth of July on Monday. The Philadelphia family was visiting the area and learned about the event online.
JIM MCGAW 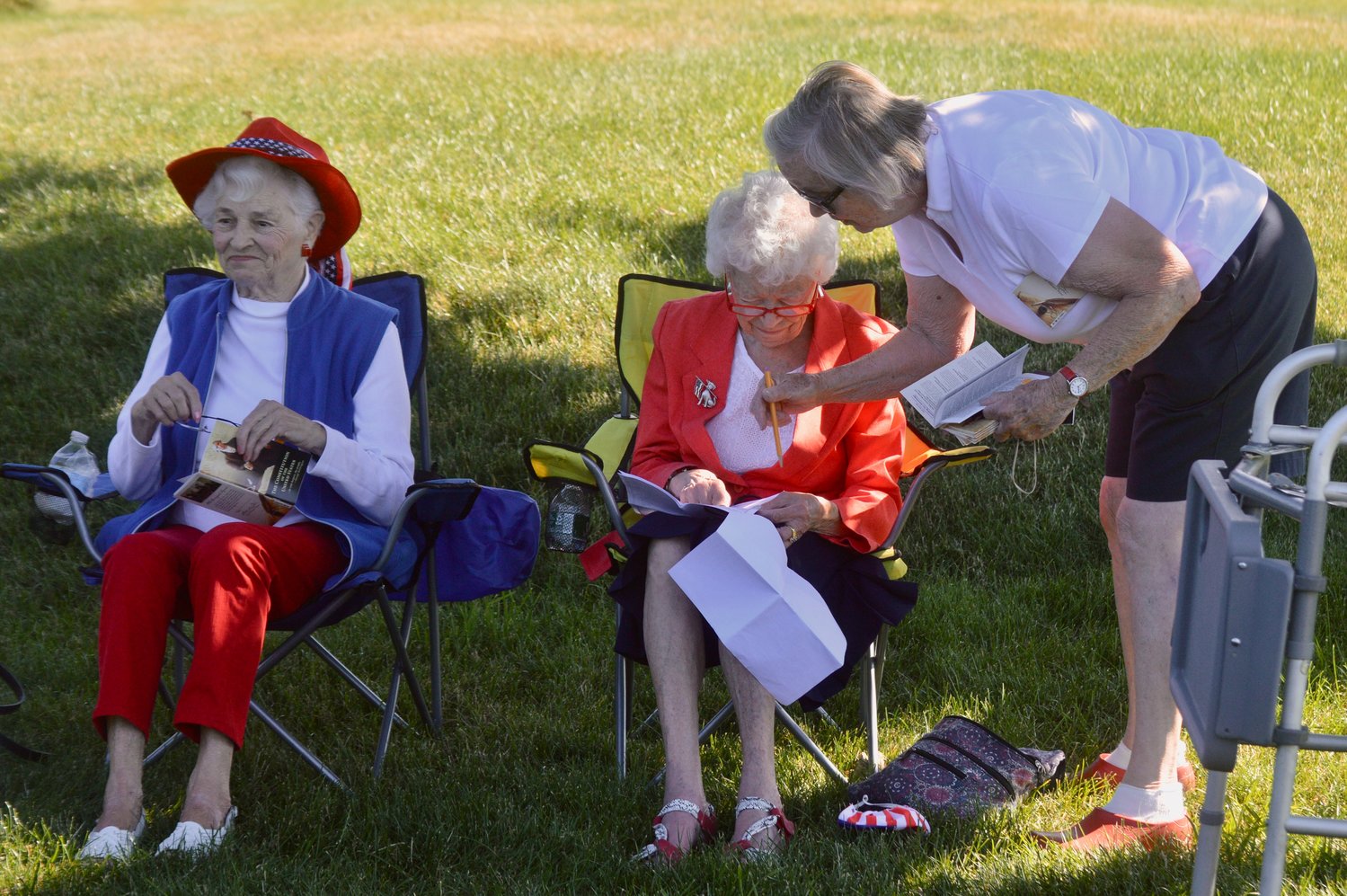 Event organizer Anne Wagner (right) shows Marjorie Wilkey the passage from which she’ll be reading during her turn. At left is Josephine Vieira, who also participated in the ninth reading of The Declaration of Independence.
JIM MCGAW 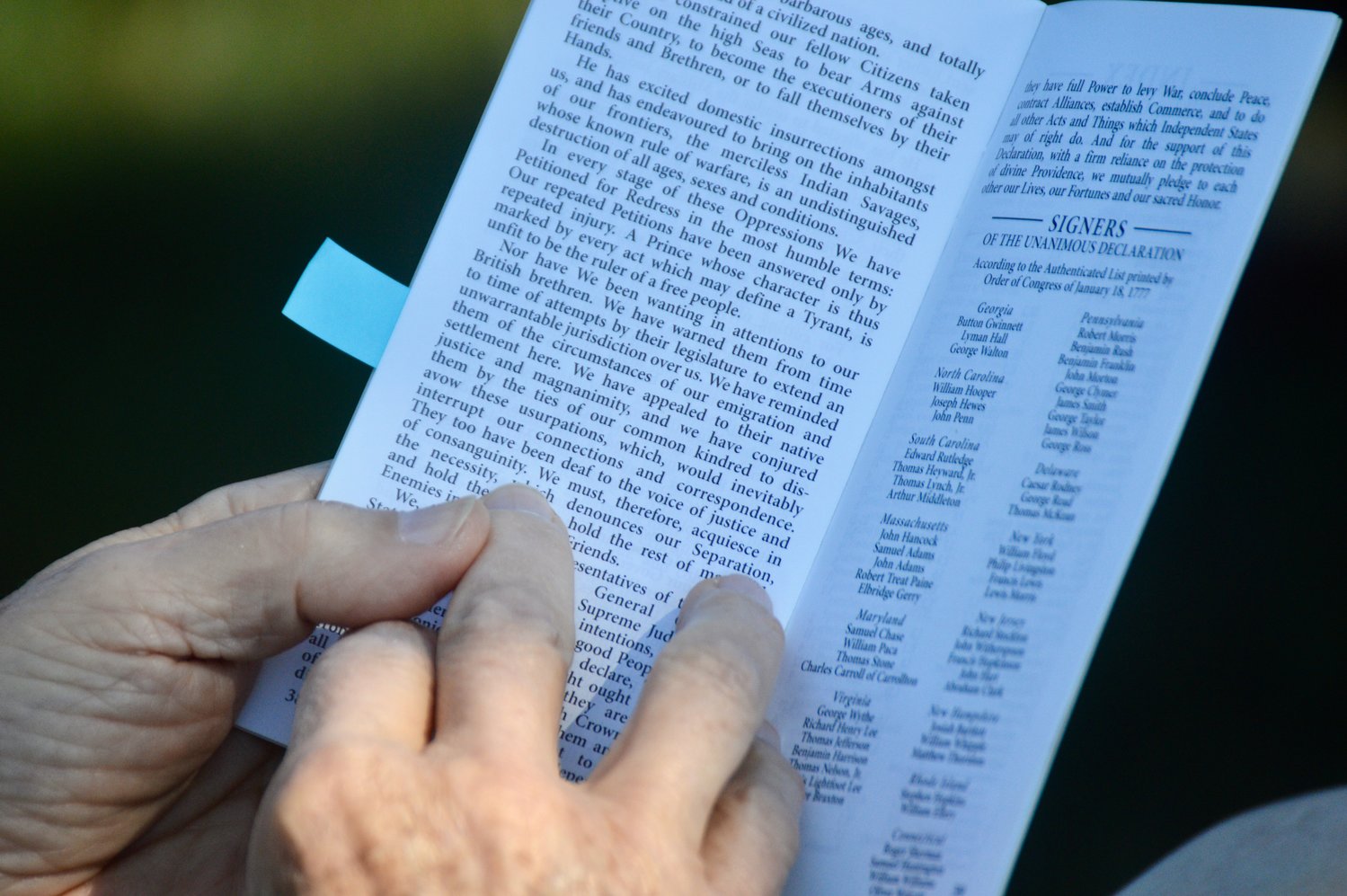 Most everyone took a turn reading from the 1,337-word document which was printed on pamphlets handed out by Anne Wagner.
JIM MCGAW 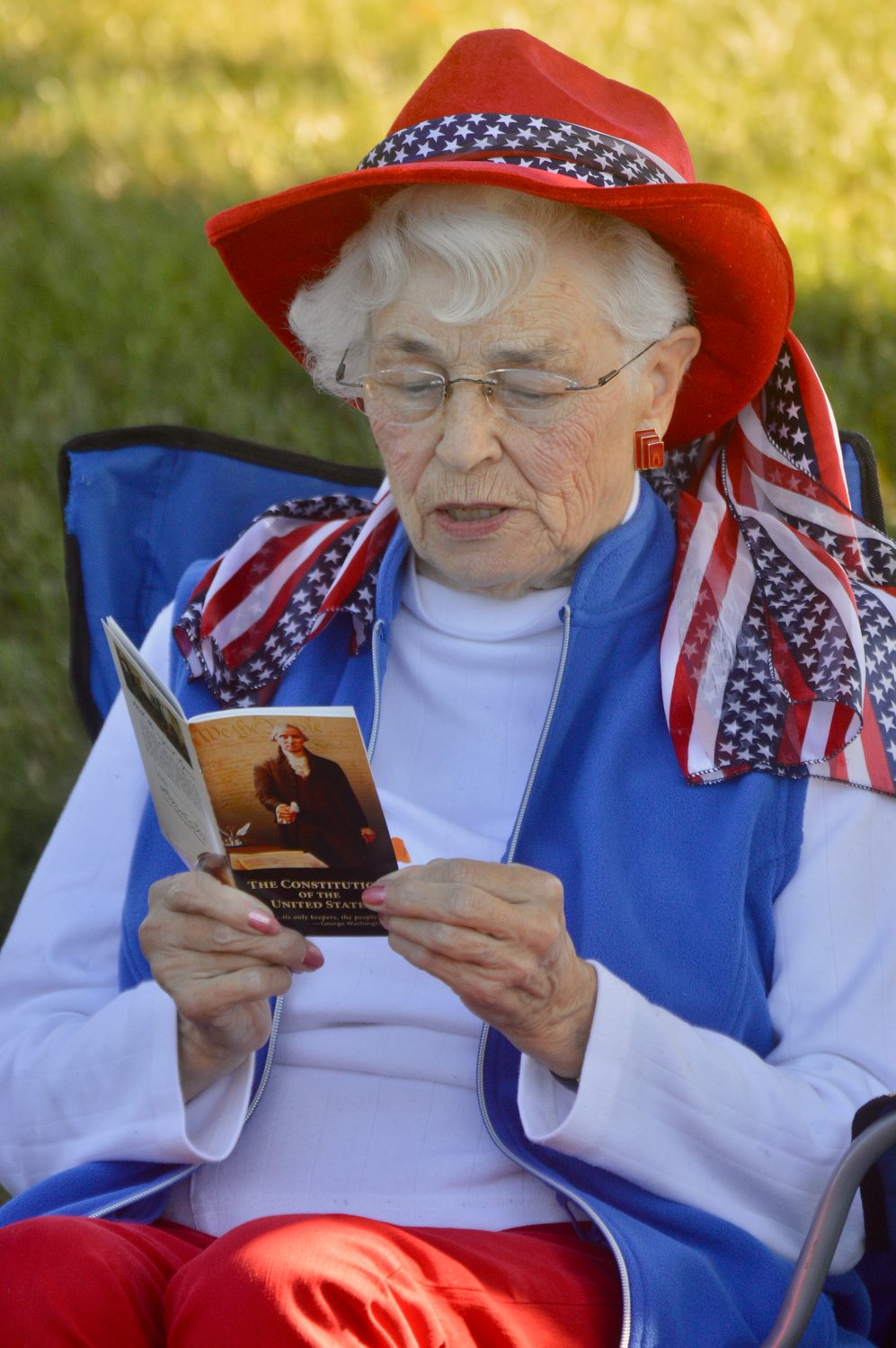 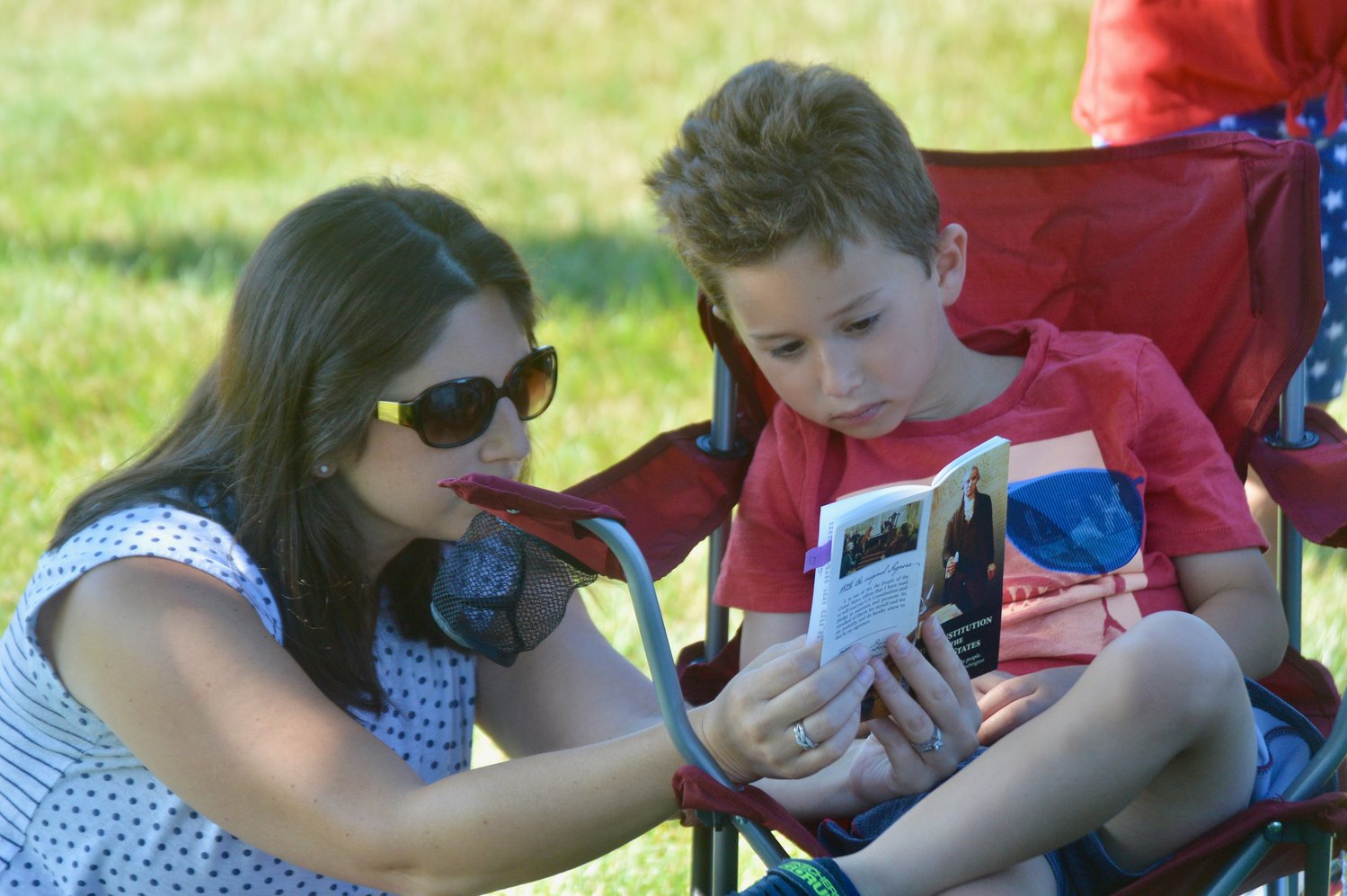 Bethany Shiner and her son, Jesse, share a copy of the document.
JIM MCGAW 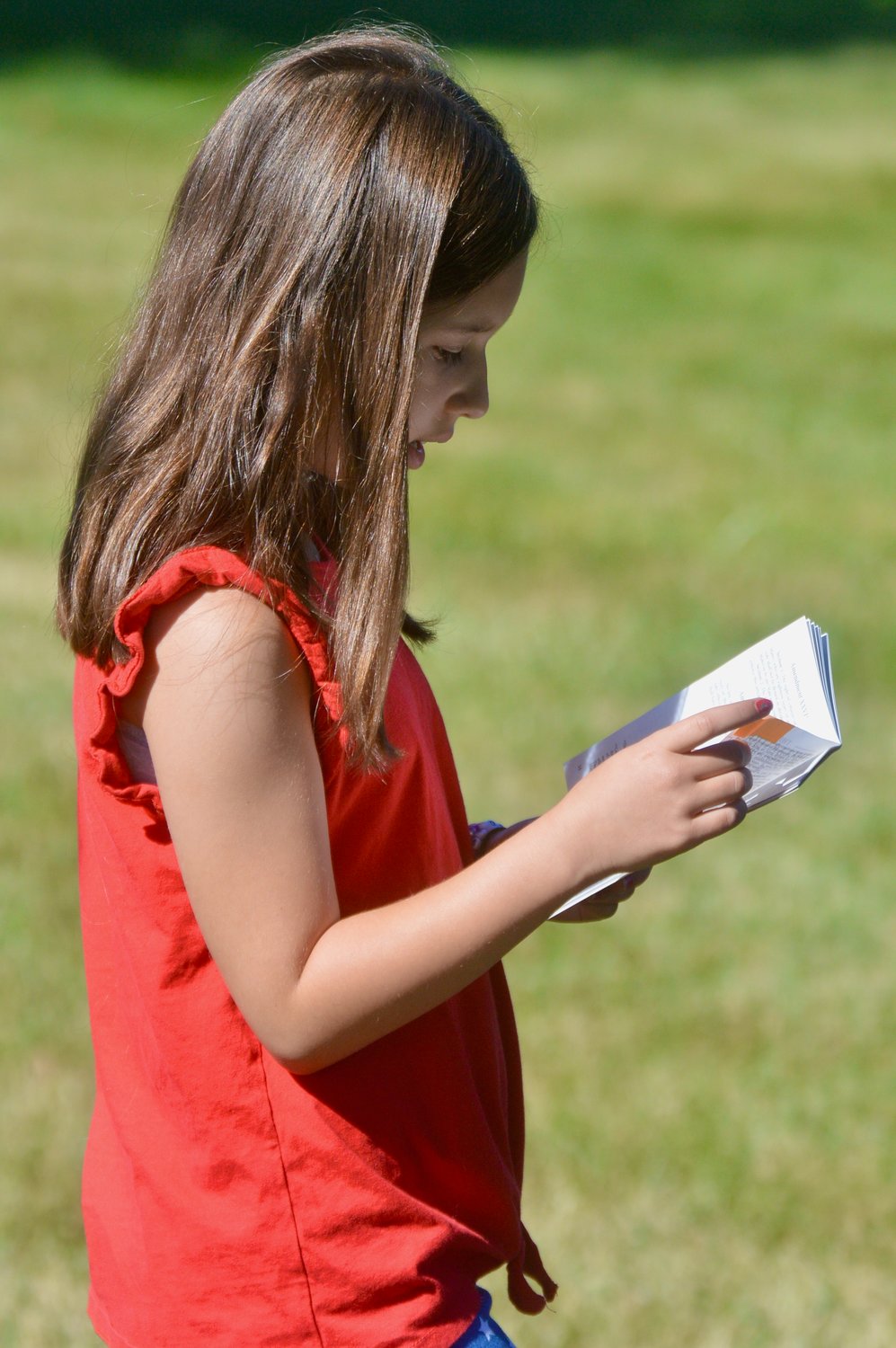 Morgan Shiner, 9, takes her turn reading a passage. She was visiting the area from Philadelphia along with her family.
JIM MCGAW 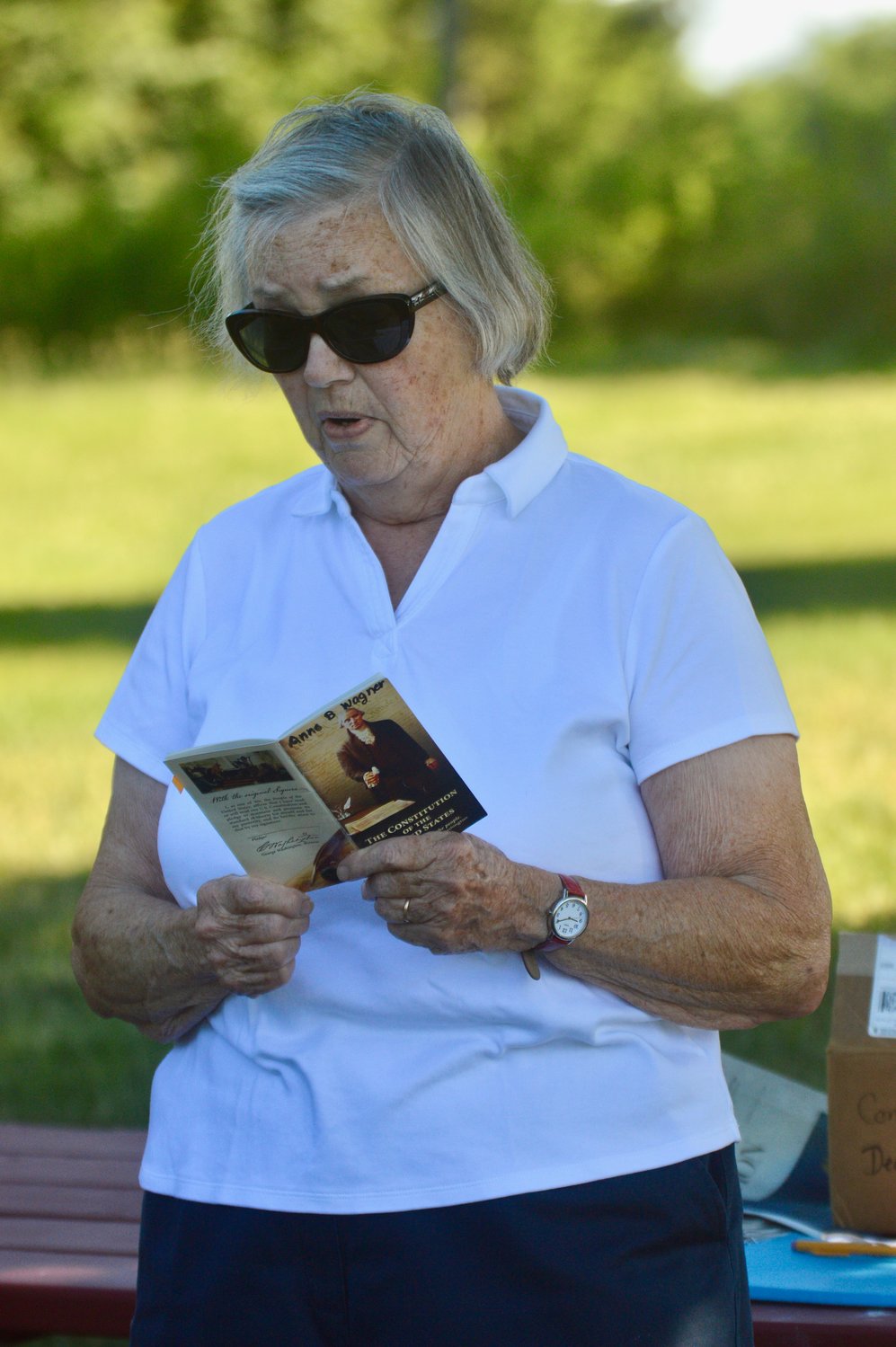 Anen Wagner reads along to The Declaration of Independence.
JIM MCGAW 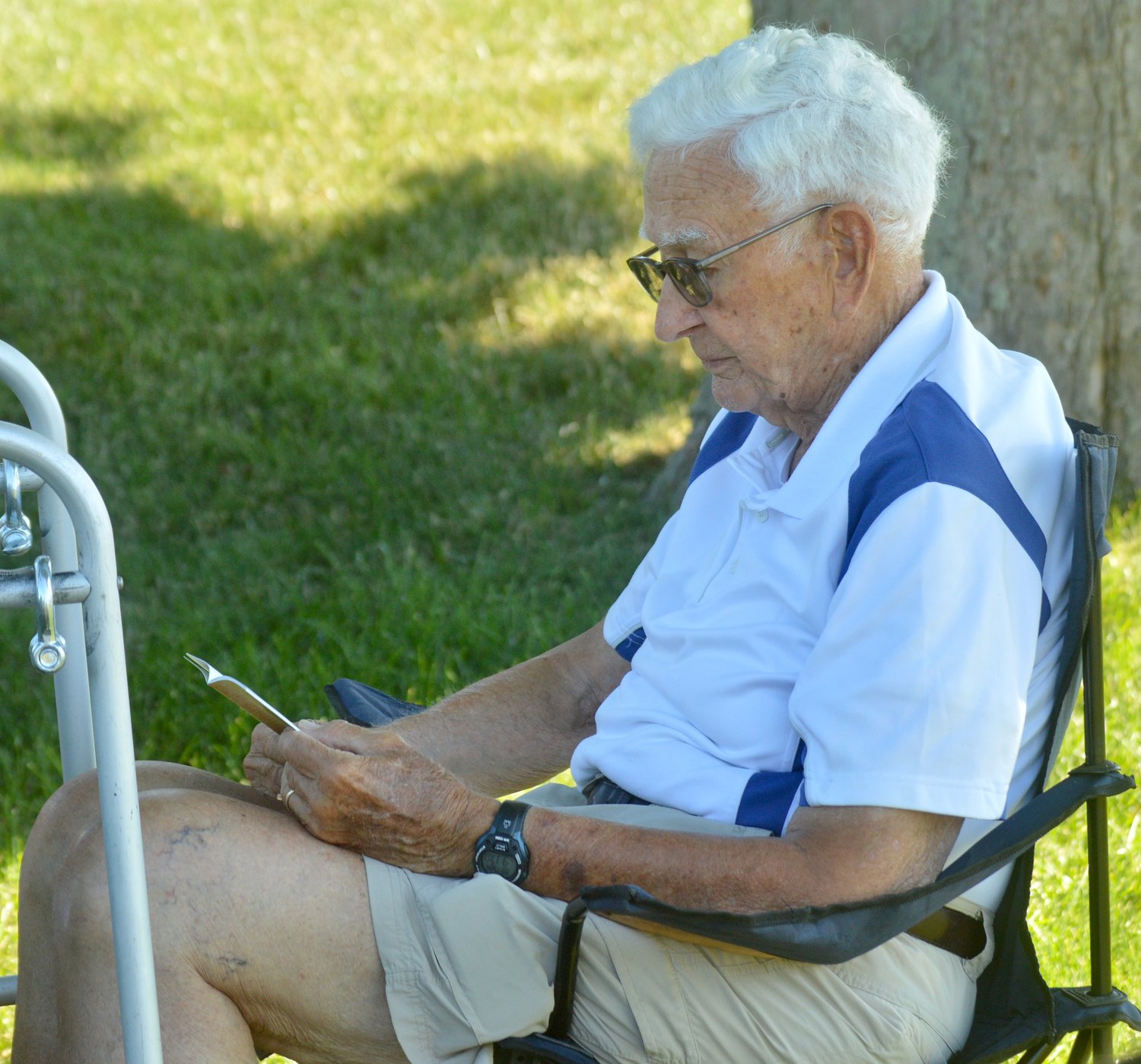 PORTSMOUTH — A Philadelphia family somehow found itself spending the morning of the Fourth of July on the grounds of the town’s library, where the very document for which the City of Brotherly Love is most famous was read in its entirety.

Bethany and Garett Shiner, along with their children Morgan, 9, and Jesse, 6, weren’t in Portsmouth to visit family. They had recently picked up Morgan from a camp in Connecticut, and were looking for something else to do.

“I’m from Connecticut originally, but they hadn’t been to Newport or Rhode Island,” explained Garett. “So we said we’d spend a few days here.”

They learned about the annual reading of the Declaration of Independence — organized by Anne Wagner and now in its ninth year — by reading about it online.

“Bethany is a major researcher and planner of adventures and trips that are off the beaten path. We like coming across little things,” Garett said.

Their arrival was a pleasant surprise to the other 20 or so participants in the reading, during which everyone takes a turn reciting a brief passage from the 1,337-word document adopted by the Second Continental Congress meeting in Philadelphia 246 years ago.

Shortly before the Shiners found a spot on the lawn outside the Portsmouth Free Public Library, a quote by former President Ronald Reagan that had popped up on social media caught Garett’s attention. It was from Reagan’s inaugural address after he was elected governor of California in 1967:

“Freedom is a fragile thing and it's never more than one generation away from extinction. It is not ours by way of inheritance; it must be fought for and defended constantly by each generation, for it comes only once to a people.  And those in world history who have known freedom and then lost it have never known it again.”

In a case of serendipity, Wagner referred to that very quote during her brief remarks before the reading.

“It’s only one generation away from being lost,” she said. “If we as parents, grandparents, teachers — however we’re related to children — don’t pass on these beliefs, our traditions, they’ll be lost.”

Wagner held up a section of a newspaper with an image of children superimposed alongside George Washington. It’s easy to forget the importance of the Declaration — and keeping traditions alive — when today’s families are so busy and children are overloaded with information coming from their electronic devices, she said.

“We need to make sure they understand the importance of keeping these traditions, so when they become parents and adults, they can pass these traditions on themselves,” she said.

After the reading, the Shiners were off to their next improvised adventure — perhaps the parade in Bristol, perhaps somewhere else.

Wagner thanked everyone for coming before leaving them with a few more words.