For artist Pascale Lord, destruction is a key part of the process of creation

“Welcome to my cave,” said mixed media artist Pascale Lord of her studio. Like so many during the pandemic, Lord brought her work home. The result is a satisfyingly chaotic creative space …

For artist Pascale Lord, destruction is a key part of the process of creation 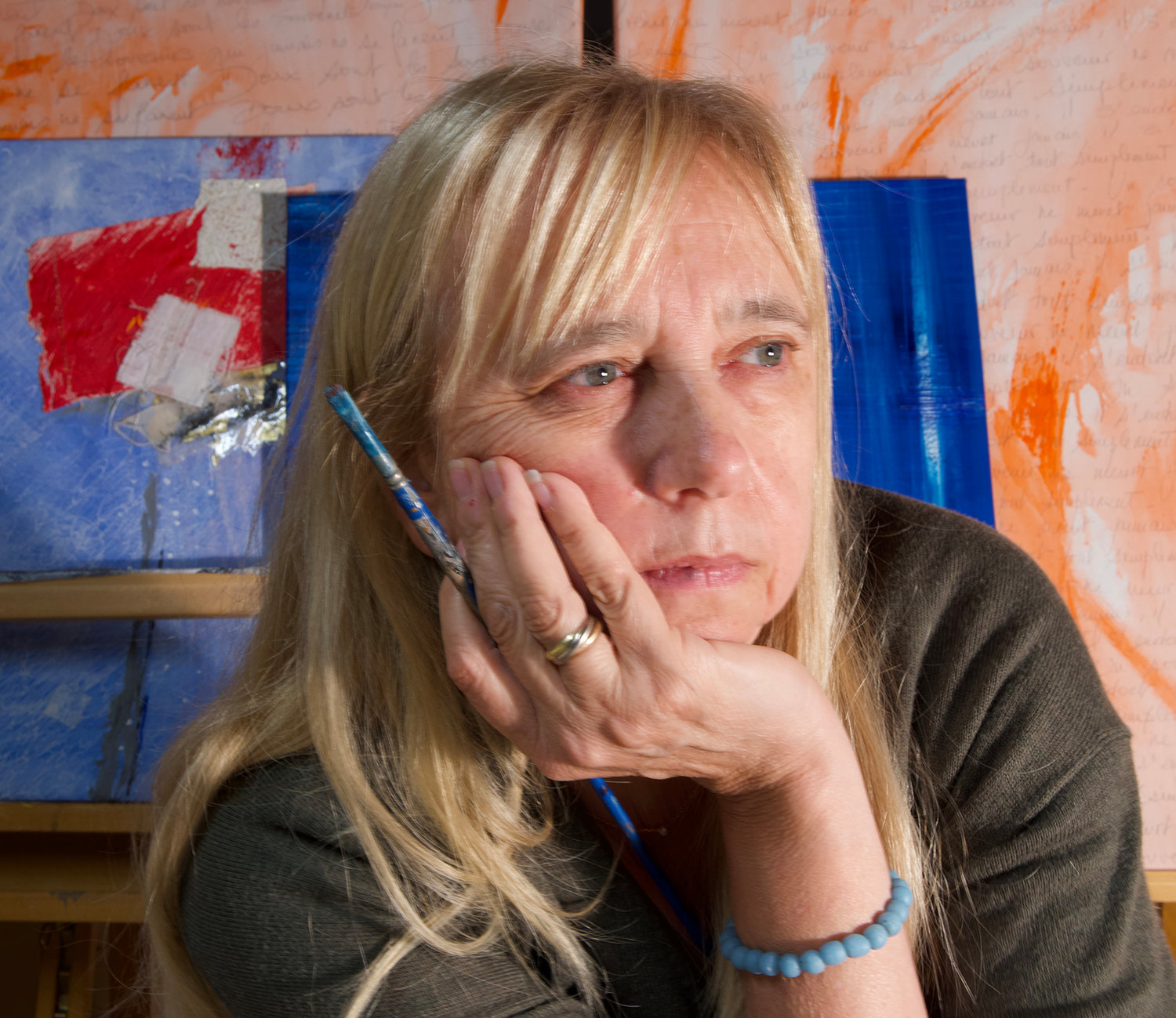 Mixed Media artist Pascale Lord creates multilayered works of art that reflect everything from her travels, to her sense of self, to her observations of interpersonal communication around the family dinner table.
Courtesy Pascale Lord 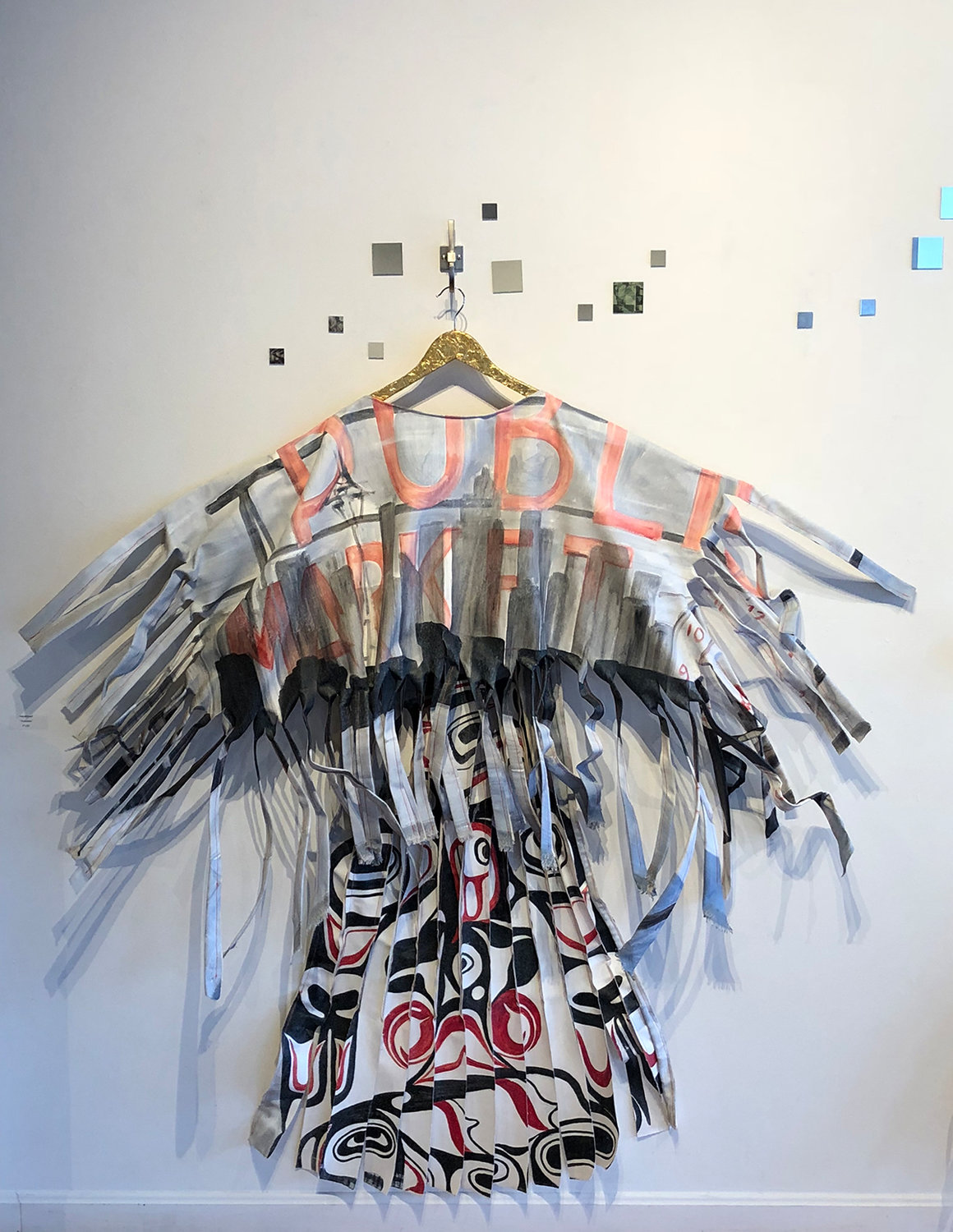 From her Voyage, Voyage series, Sammamish was inspired by the indigenous cultures of the Pacific Northwest, where Lord lived for several years before moving to Barrington. It will be hanging in the Newport Art Museum along with another piece from that series, in early 2022.
Courtesy Pascale Lord 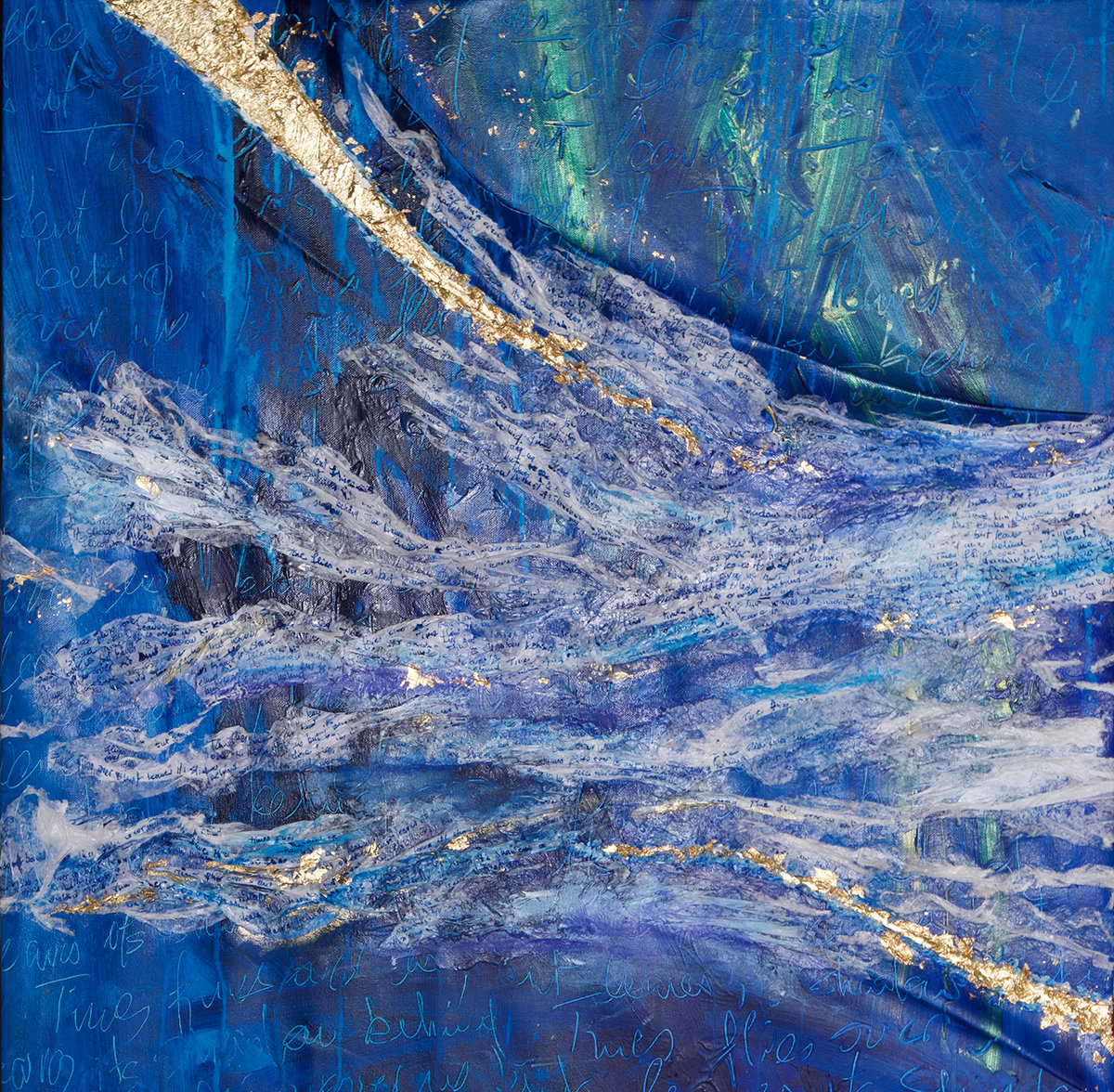 L’âme, comme la mer, a ses remous....Translation: the soul, like the sea, has its eddies. This piece is part of Lord’s Out of the Bleu series, influenced by her understanding of aging as a woman.
Courtesy Pascale Lord
Previous Next
Posted Monday, November 8, 2021 10:13 am
By Christy Nadalin

“Welcome to my cave,” said mixed media artist Pascale Lord of her studio. Like so many during the pandemic, Lord brought her work home. The result is a satisfyingly chaotic creative space in which the dominant color is every imaginable shade of blue, from soothing to vibrant.

“As a diver, as a woman, blue speaks to me,” says Lord. “It the color of creation; all life comes from water.”

Raised and educated in France, Lord came to the United States through work opportunities for her husband, a native of the UK. The couple and their children settled first in Seattle and then, about a decade ago, moved to Barrington. On both coasts, she picked up side work teaching French, but ultimately found that just took her time and focus away time from her real passion.

As a member artist of IMAGO in Warren, her work appears there with some regularity. She is also a member of the Fort Point Art Community in Boston. “It’s always something to have the opportunity to show your art,” said Lord, who ranges about as far as Boston and New York for opportunities. She admits it was a little easier in Seattle. “There is a big contemporary art community there, more so than here,” she said. “But you have to adapt.” She just recently concluded an exhibit at TF Green Airport, and she will have 2 pieces in a Newport Art Museum exhibition, beginning in January. Several pieces of hers are hanging and for sale at Bleu Marine, a spa in Wayland Square.

Working primarily in mixed media with paint and canvas as the foundation, her recent projects have followed one of four themes: “Superlative”, a series of high-energy assemblages which radiate positivity and optimism as we emerge from the pandemic; and “Voyage, Voyage,” a collection of garment forms with a variety of cultural influences that addresses the journey that we all take in life not only through worldly travels, but also by experiencing the passage of time and aging.

“My major subject in aging, how time is flying and as a woman, I feel it’s more challenging for woman to lose her youth,” she said. “Out of the Bleu” is a series influenced by Lord’s understanding of aging as a woman, and the fact that skin changes, reflecting traces of time and hardship.

Growing up in France, Lord’s mother called the family to dinner with “A Table!” In this series of works, food is a metaphor for the nature of communication between people. Words, mirrors, and layers of texture represent the layers meaning (and hidden meaning) of the various personalities around the table. “I’m always working with words, but you don’t necessarily see them,” said Lord. “It’s an open door for the viewer to try to understand your work.”

Integral to Lord’s unique style is the complex layering of the paint and other media — layers of canvas may be painted, etched with a Dremel, and repainted, mirrors applied to reflect back at the viewer; everything is painted, worked, and painted again.

“I create and I destroy,” she said. “Creation requires destruction of the past, so you can reinterpret it and create something new and beautiful.” Each piece can take a great deal of time, but to Lord, that’s immaterial.
“A piece of art is like writing a book in another language,” she said. “It’s color, material, composition — all of that. You don’t count hours. Creation is not a straight line.

“When you start you have an idea, but it’s a process, that takes time, from the idea to how to express it. Then you start and have all the technical issues you encounter, so you go away and come back to it. You start somewhere, then you change, destroy, and recreate.”