Football is back: Portsmouth overwhelms Westerly, 24-7

Football is back: Portsmouth overwhelms Westerly, 24-7 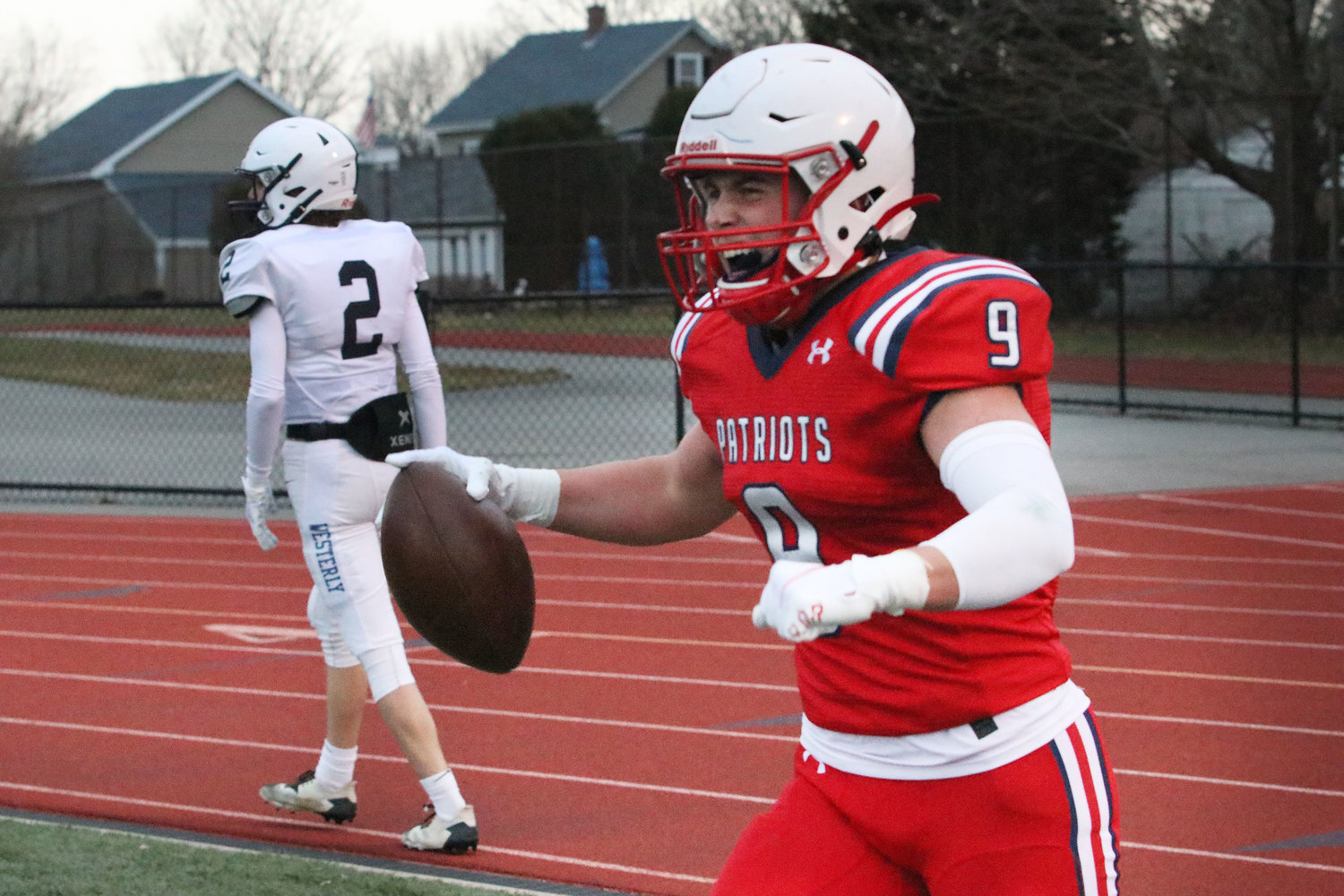 The Patriots’ Chris Bulk celebrates his touchdown catch from Ben Hurd in the second period, which put Portsmouth up 21-0 after the extra point.
Richard W. Dionne, Jr. 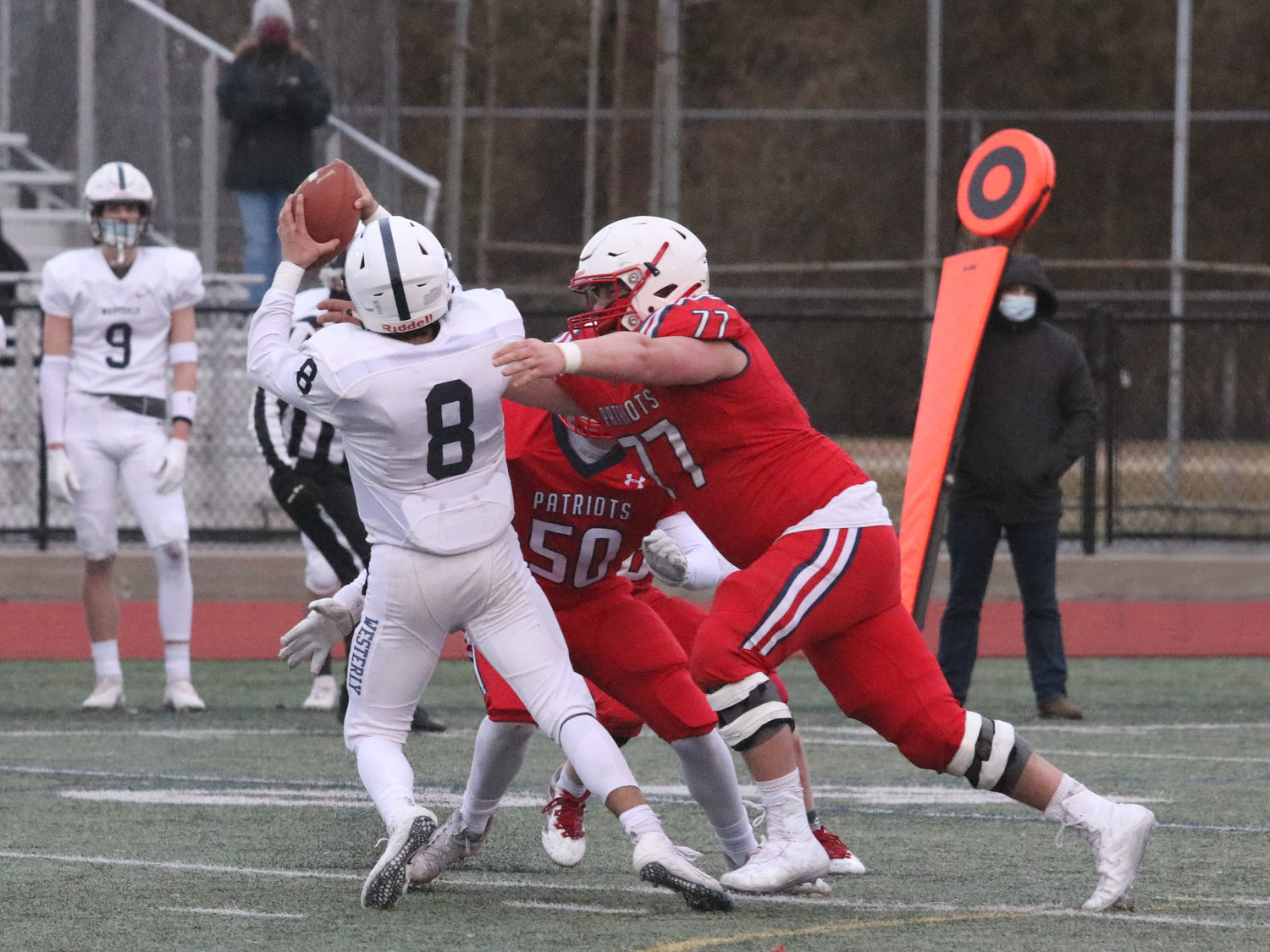 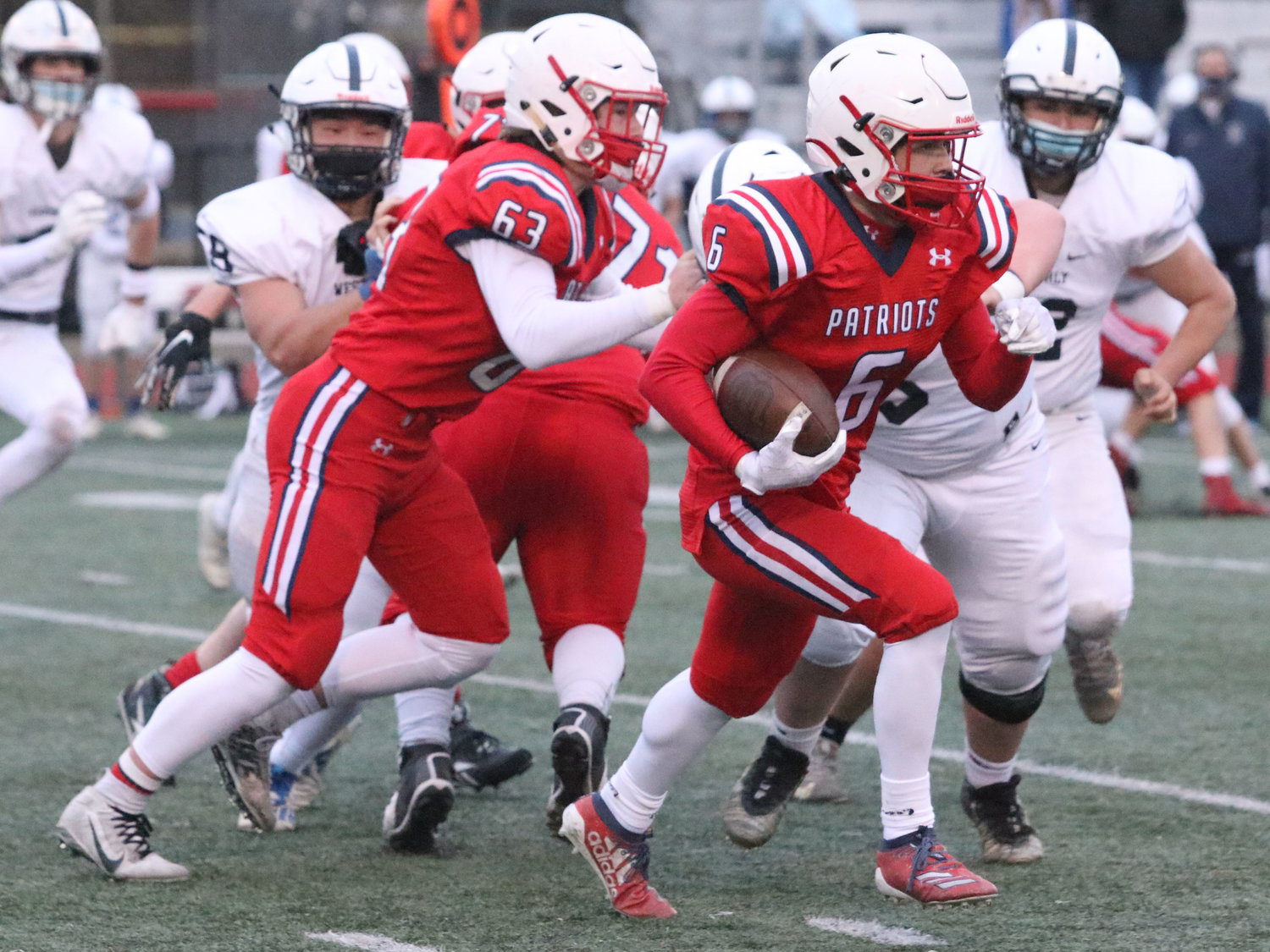 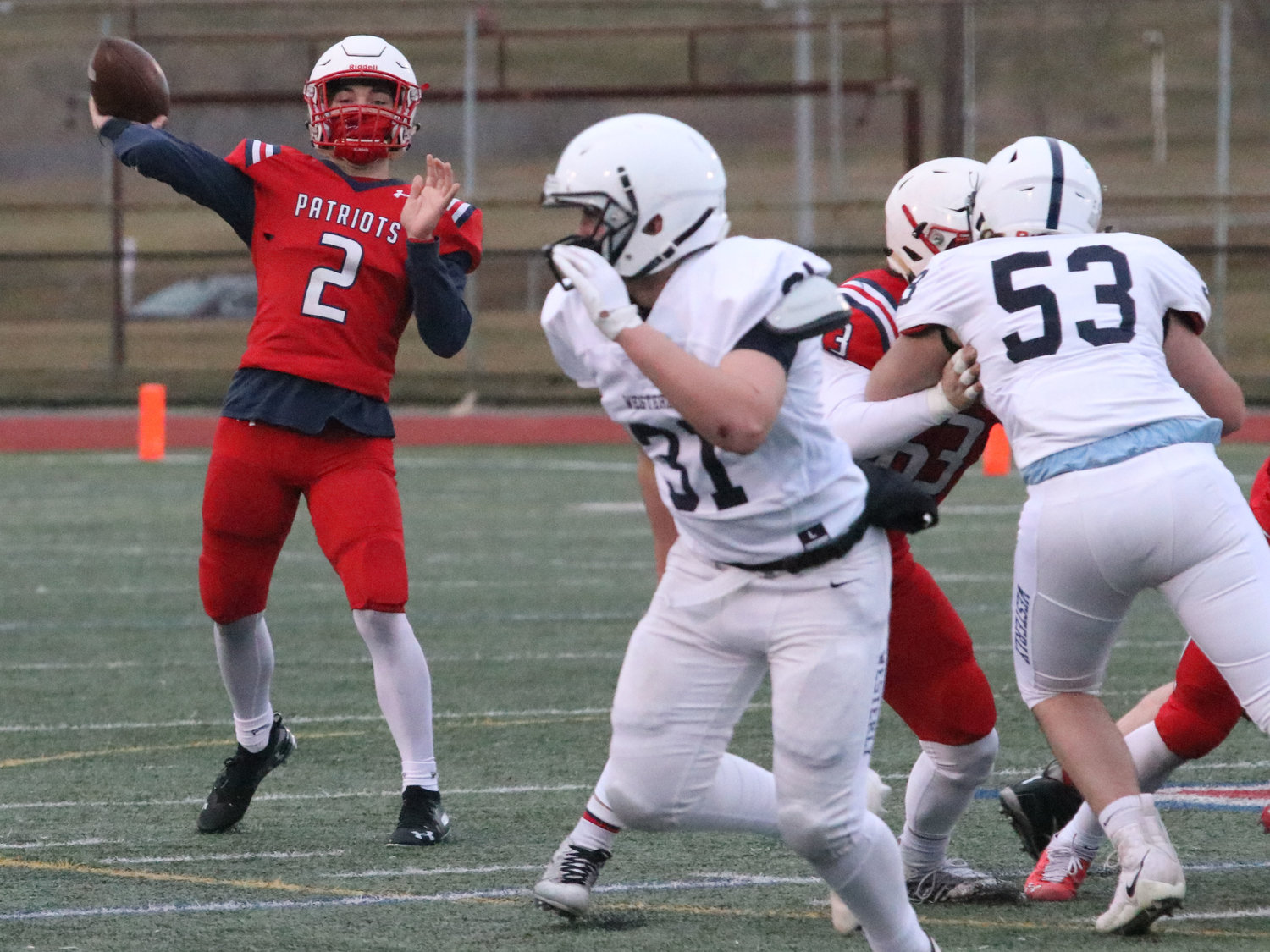 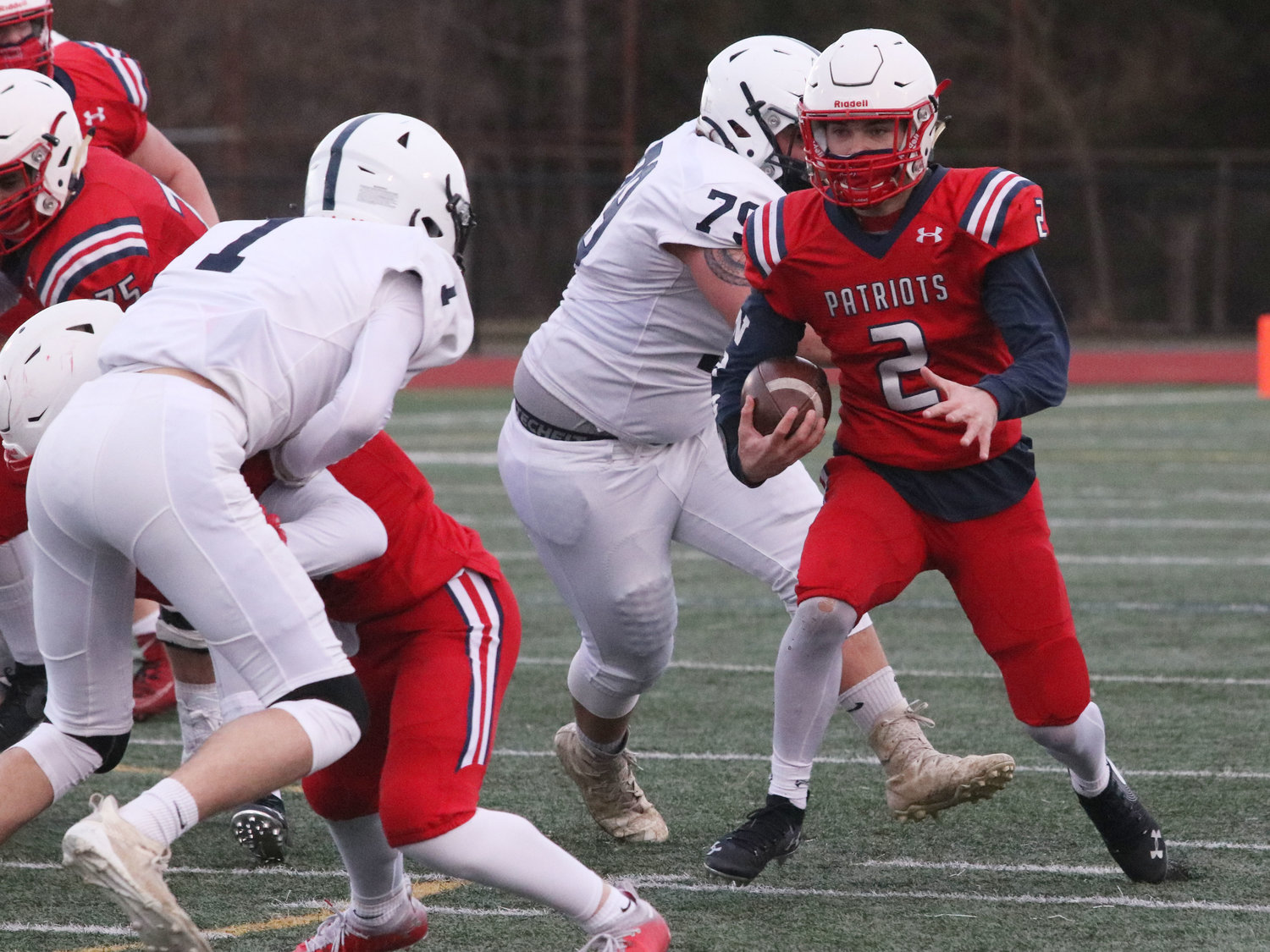 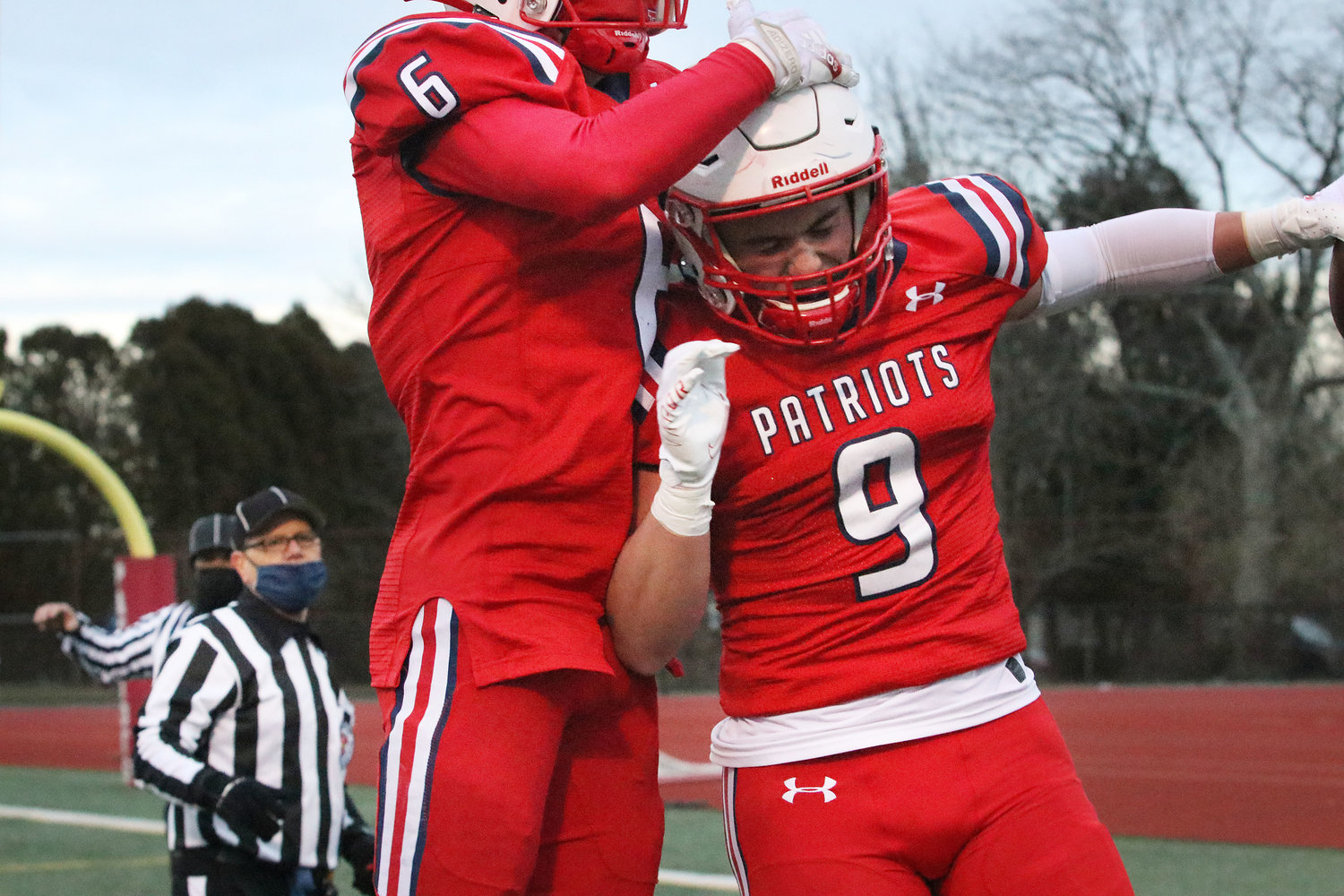 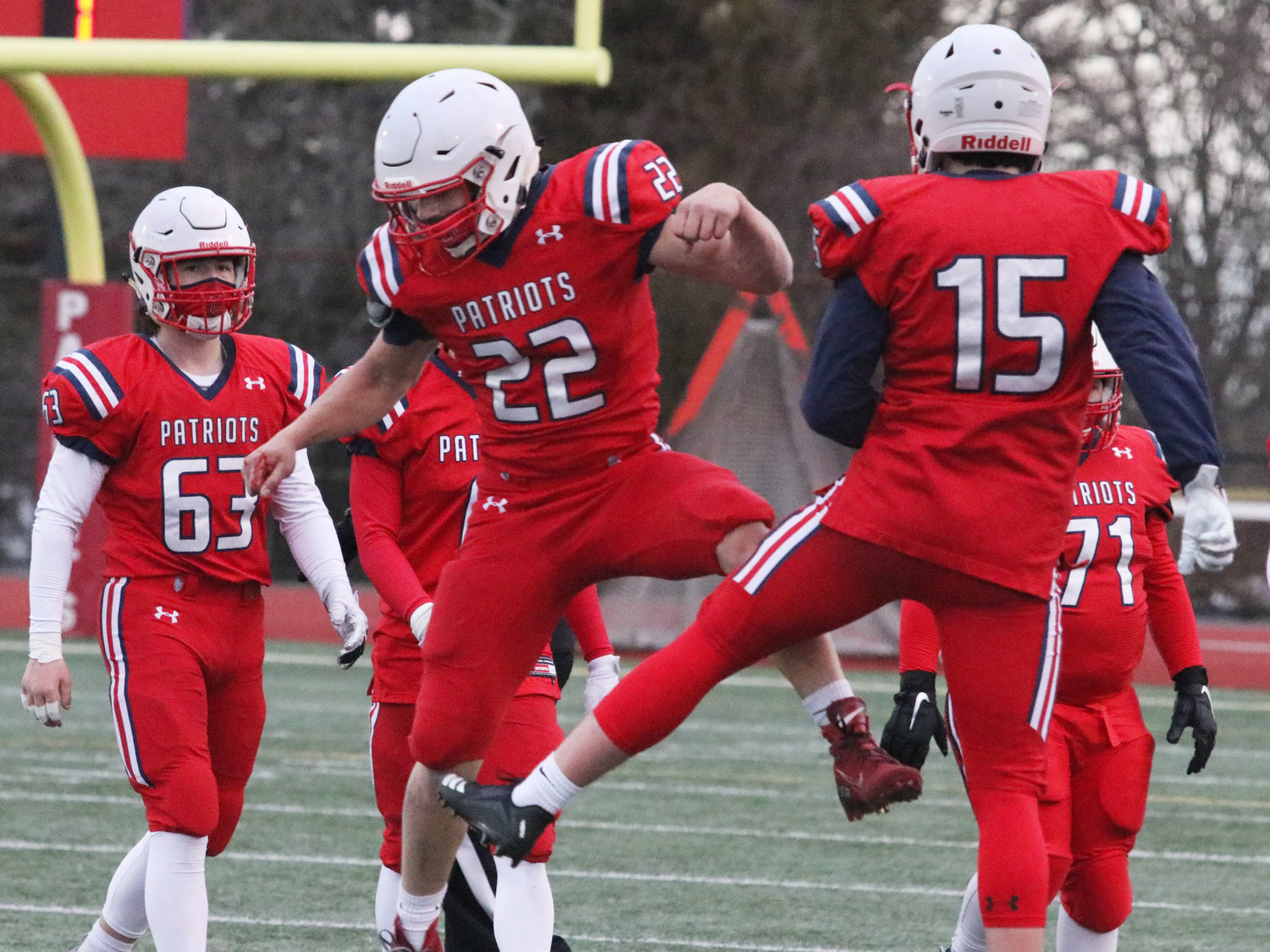 Thomas McGraw and Evan Beese react after the end up the second period, with the Patriots up 24-0.
Richard W. Dionne, Jr. 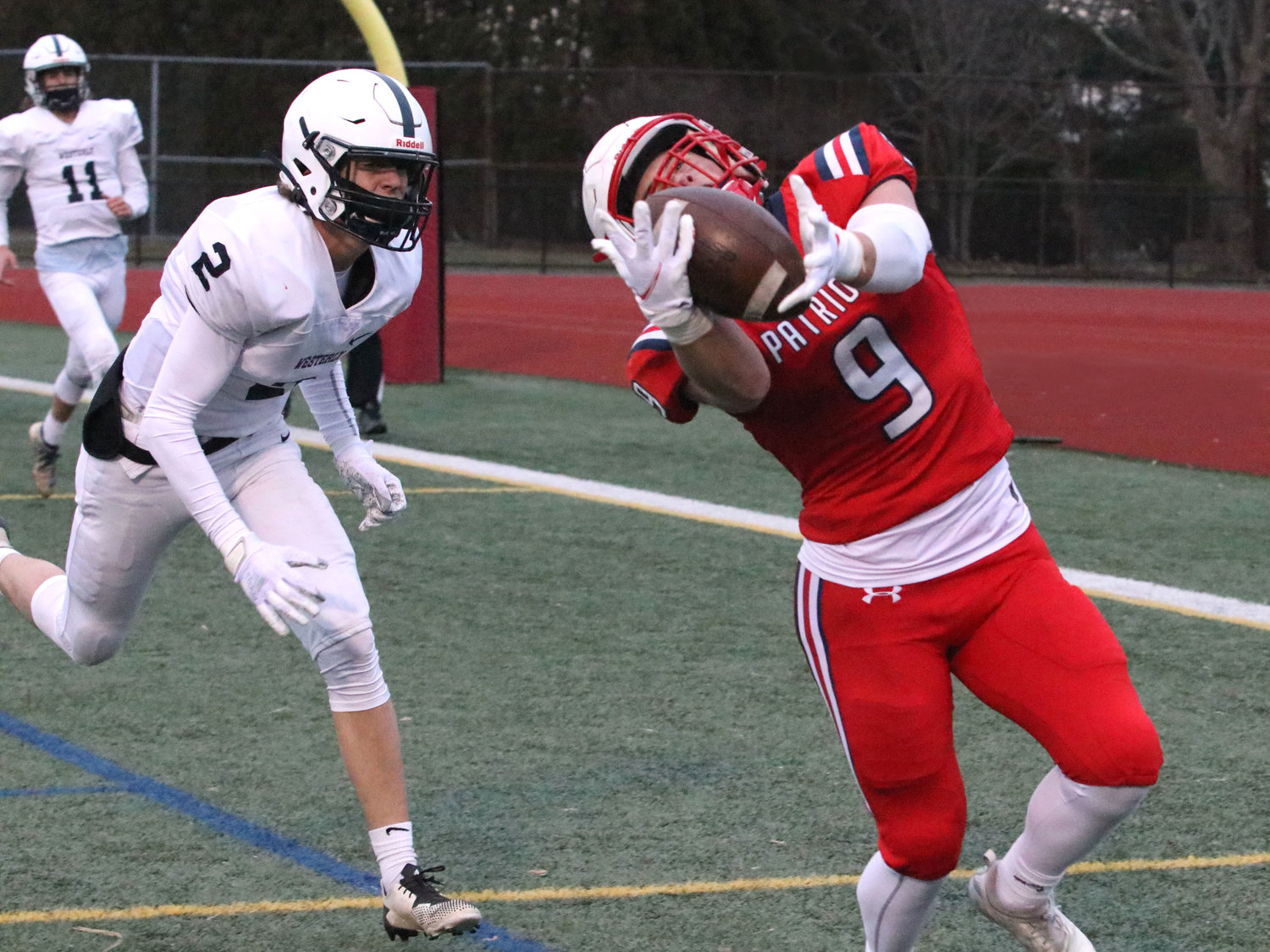 Chris Bulk hauls in a TD catch in the second period. He also scored a rushing touchdown after a turnover near the start of the game.
Richard W. Dionne, Jr. 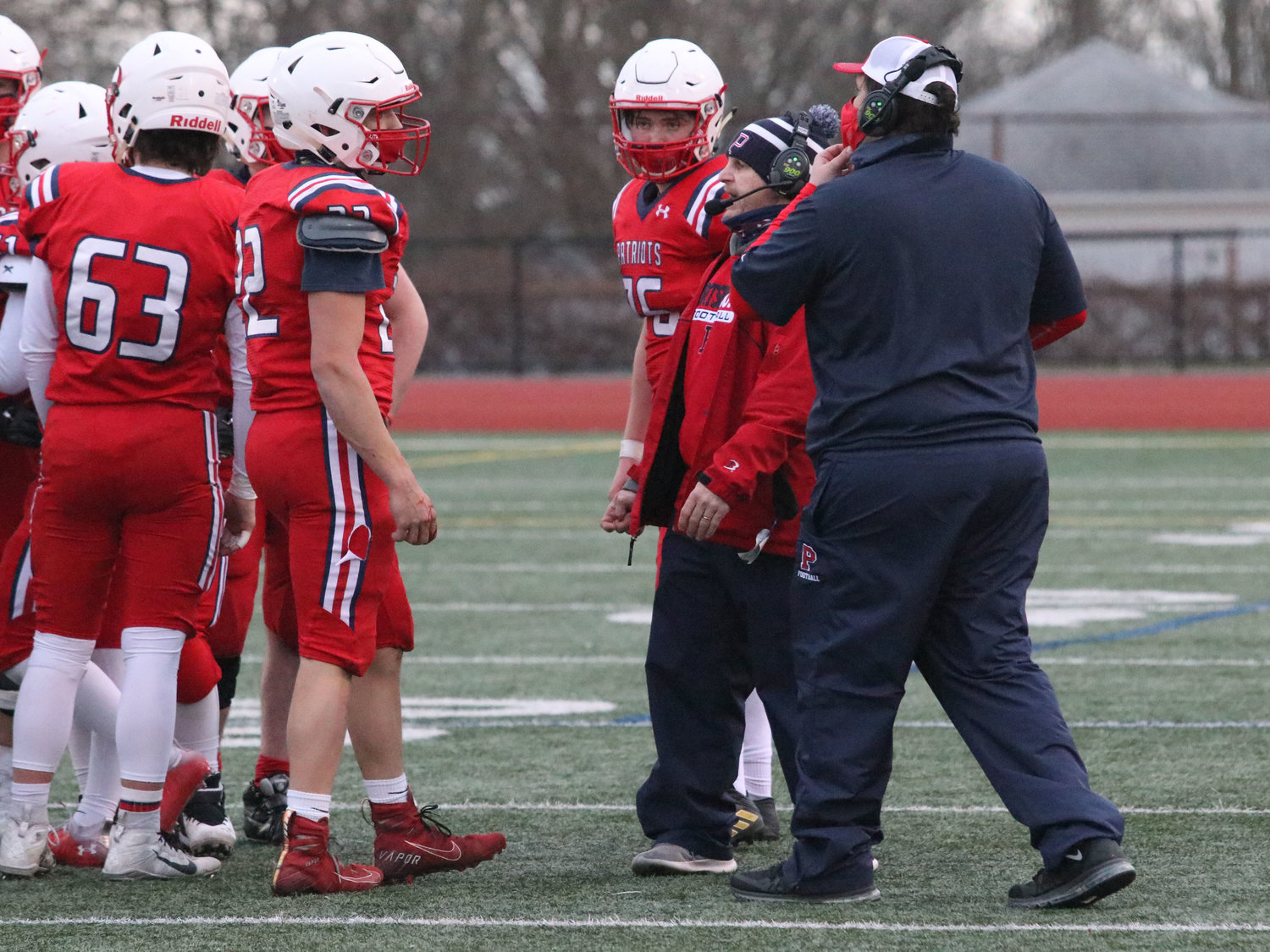 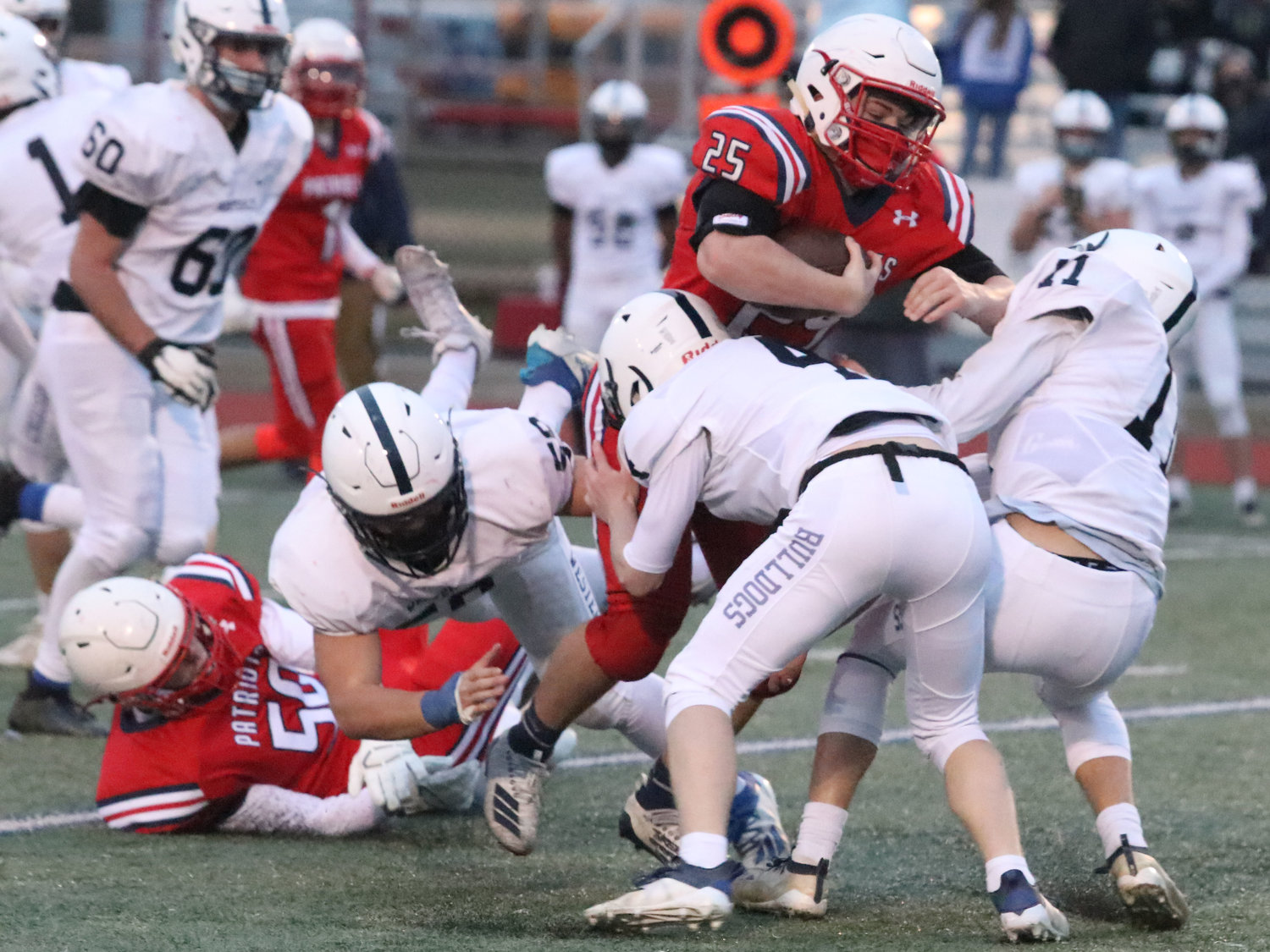 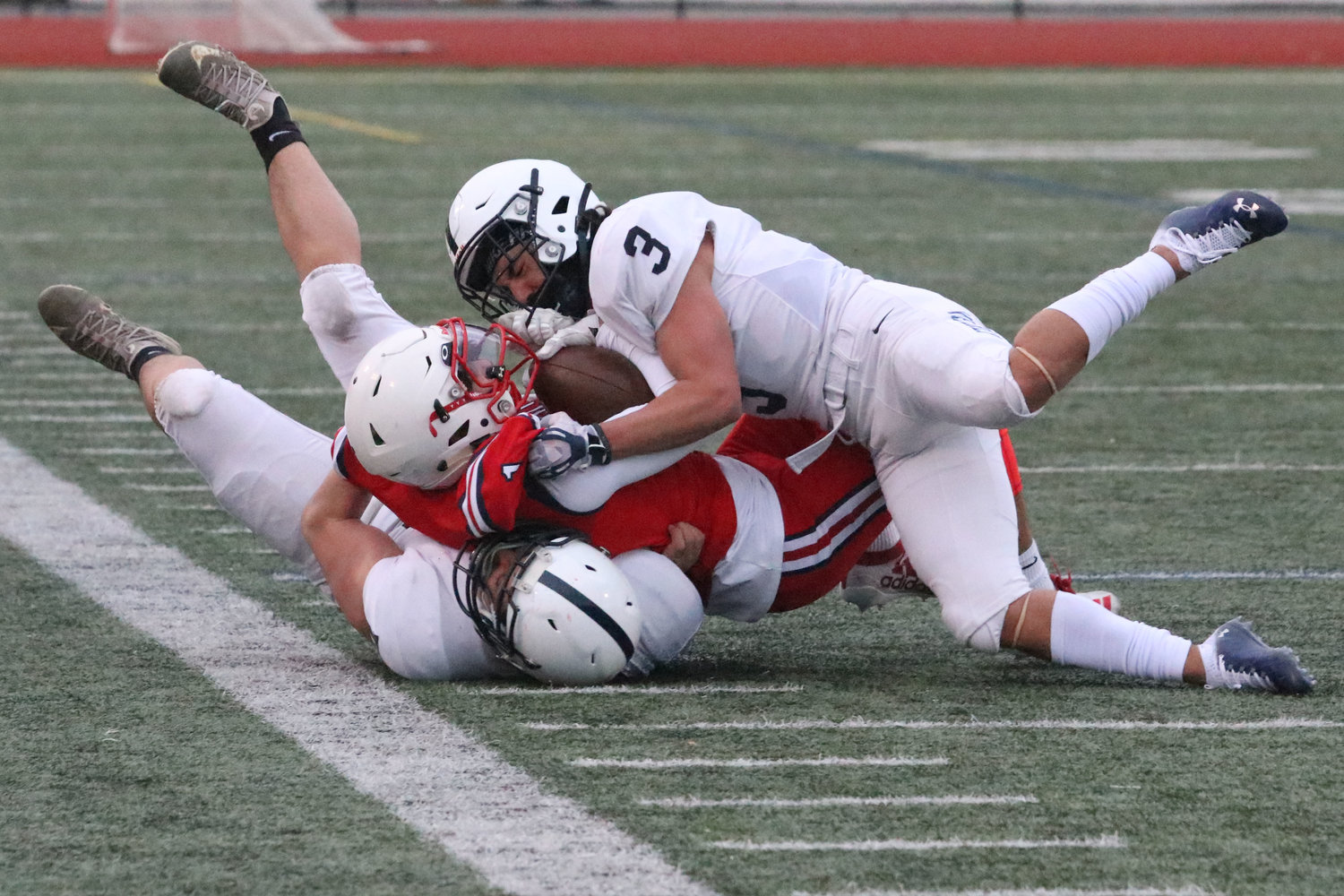 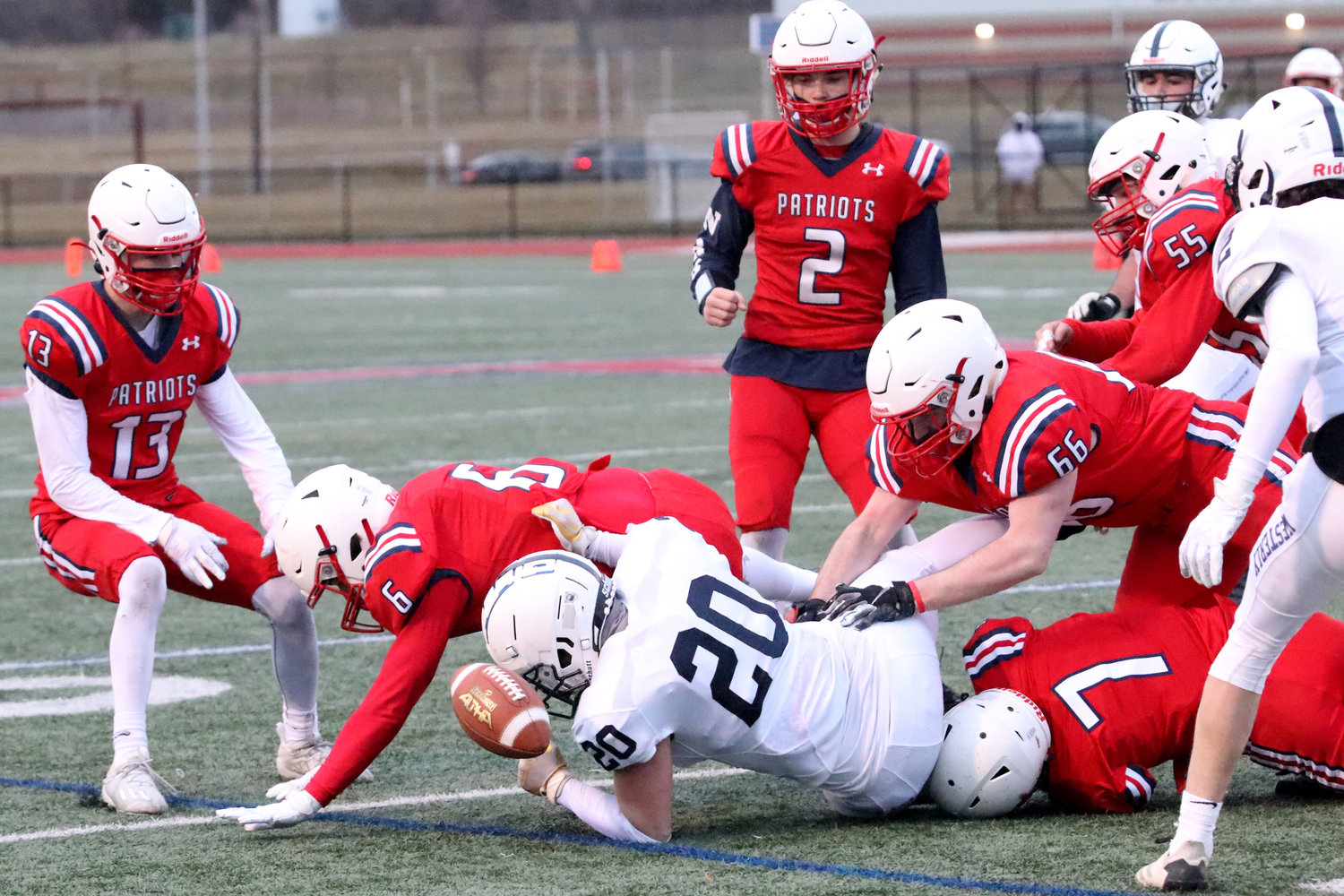 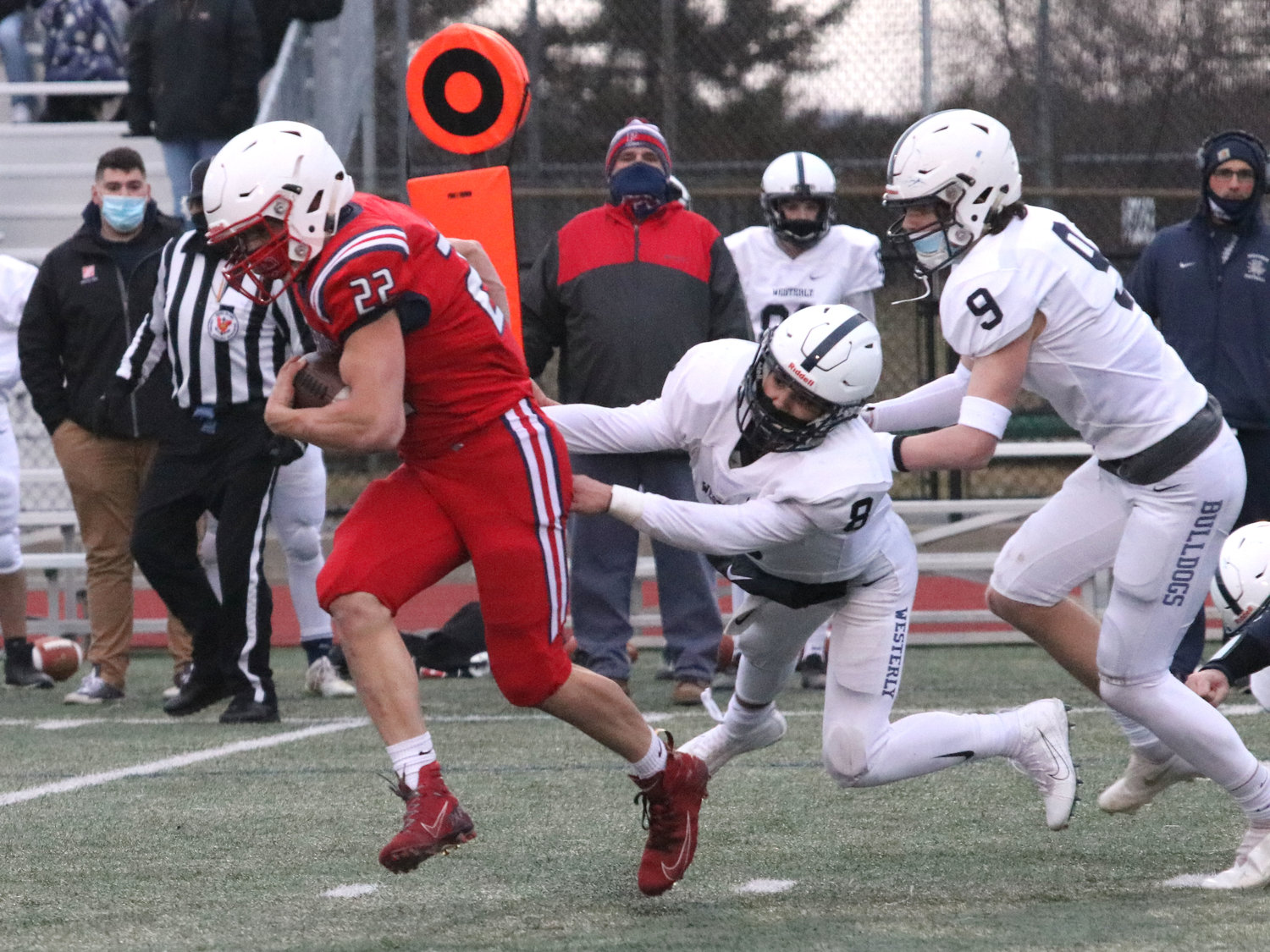 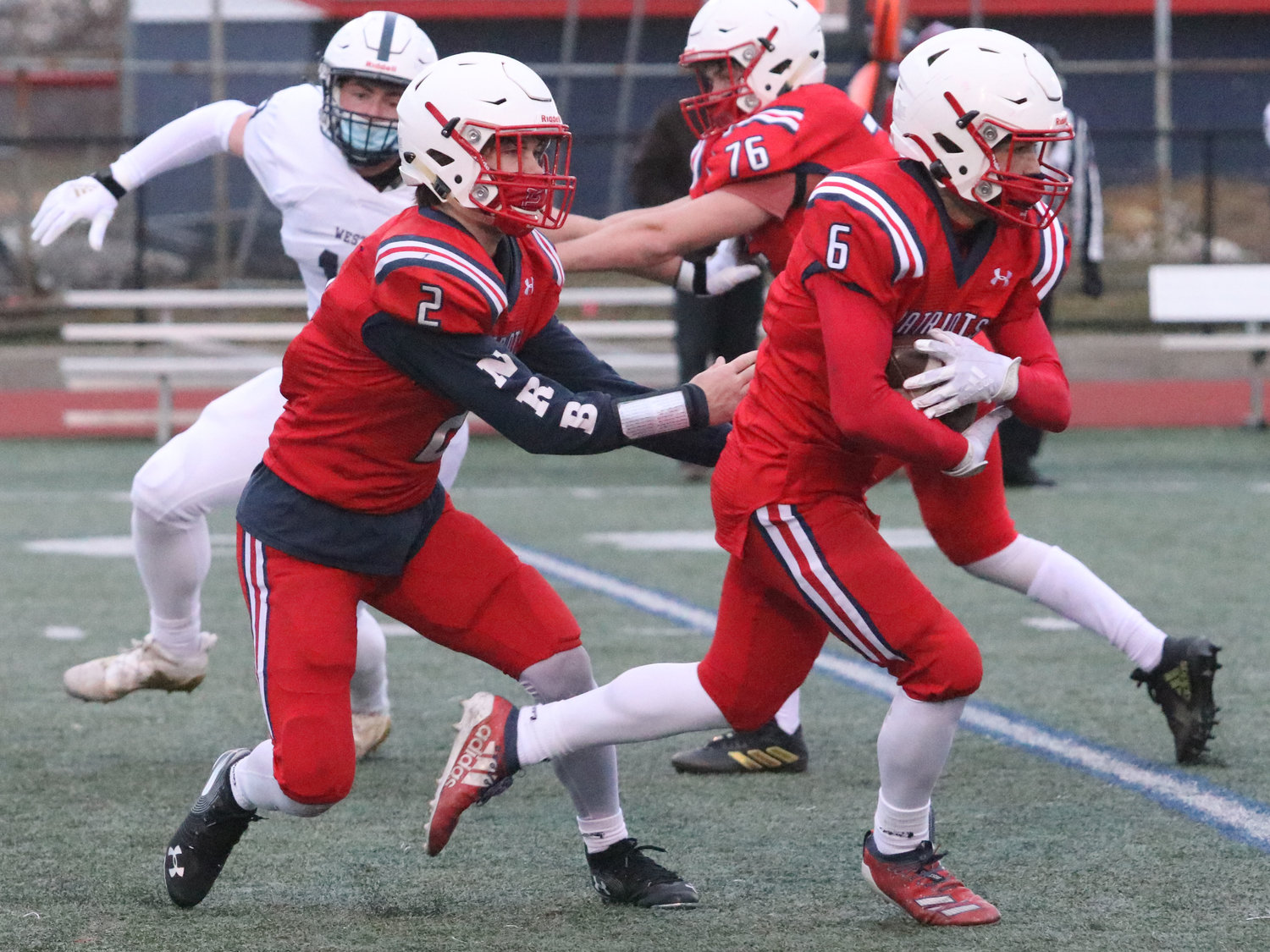 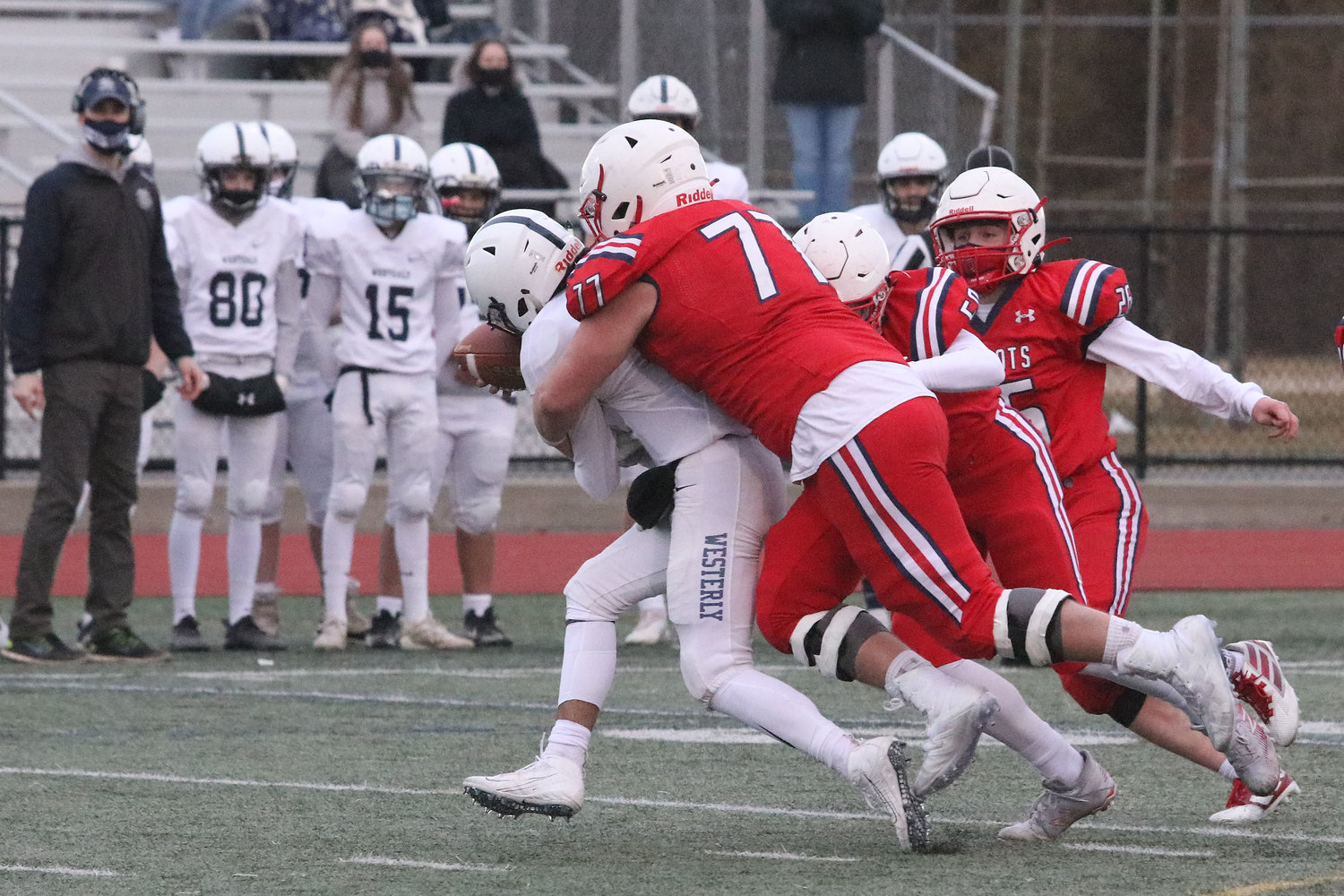 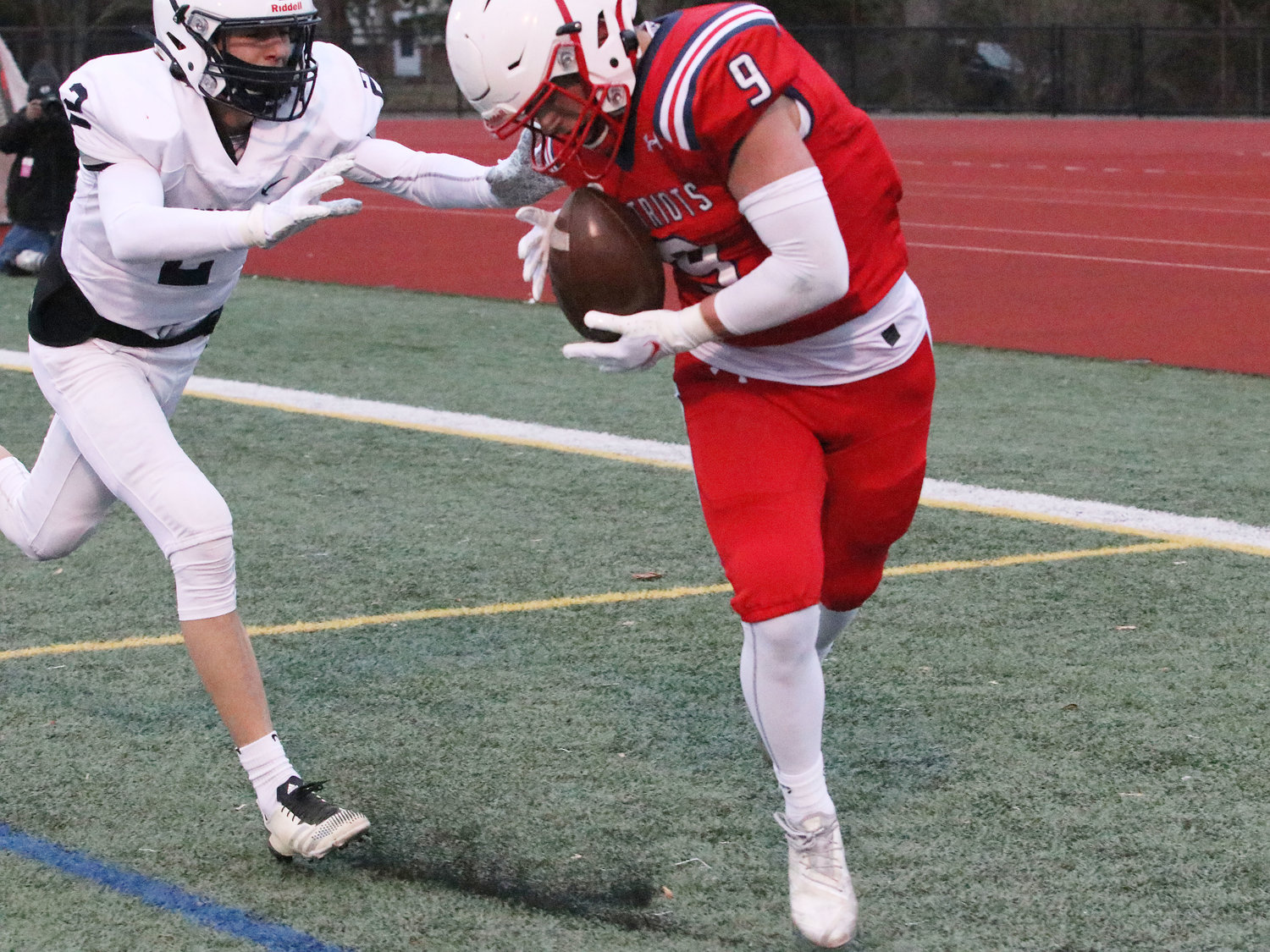 PORTSMOUTH — Members of the Westerly High School football team had to have known it was going to be a long night when they received the opening kickoff Wednesday night — then found themselves down, 7-0, just 19 seconds later.

During the opening game of a rare spring football season delayed due to the pandemic, the visiting Bulldogs had no answer for the Patriots on either side of the ball and were thoroughly dominated, 24-7. Westerly’s only touchdown came in garbage time, with a 12-yard throw into the end zone with just four seconds left on the clock.

While it was a long night for the Bulldogs, the game itself was short due to COVID-19 restrictions: three 12-minute periods, with only a short break in between. There was no halftime, no marching band, no cheerleaders, and fewer than 50 home spectators in the stands. Everyone’s temperature was taken prior to entrance, and both spectators, players and officials were required to wear masks and practice social distancing.

Despite the low-key atmosphere, the game got off to a rollicking start. The Patriots won the coin toss and chose to defer, kicking off to the Bulldogs. On the second play of the game, the Bulldogs fumbled, with Portsmouth’s Luke Brennan recovering the ball at Westerly’s 33-yard line.

On the Patriots’ first play from scrimmage, senior Chris Bulk took the ball and ran to the right, virtually untouched into the end zone. After the extra point by Andrew Perry, Portsmouth was up 7-0 only 19 seconds into the game.

Portsmouth’s defense proved to be just as effective as its offense, with Westerly then going three and out thanks to excellent contributions from Evan Beese and Cam Boucher.

The Patriots’ next possession saw junior Marcus Evans run for two first downs — including one for 28 yards — before quarterback Ben Hurd kept the ball for a 14-yard touchdown run. After the successful extra point, the Patriots were up 14-0 with six minutes left in the first period.

The Patriots third TD came with 8:38 left in the second period, when Hurd completed a beauty of a pass from the 9 yard line that was caught by Bulk in the right corner of the end zone. During that drive, Hurd also made passes to Marcus Botelho (20 yards) and Tommy McGraw (15 yards), while Evans and Carson Conheeny both rushed for first downs.

Portsmouth forced another punt, and on its next possession kept the pedal on the gas, with good running by Evans, Shane Harvey, and Neal Tullson. The Patriots had to settle for a field goal, however, and Perry put it through the uprights from 32 yards out, making it 24-0 PHS with 52 seconds left in the second period.

Portsmouth was on cruise control from then on out. The Bulldogs avoided the shutout when Lance Williams threw a completion to Luke Marley in the corner of the end zone with four seconds left in the game.

The Patriots are scheduled to play a scrimmage against Rogers High School at Toppa Field Freebody Park at 2 p.m. on Saturday, March 20. That contest is closed to all spectators.

After that, the team travels to Bishop Hendricken for a 7 p.m. matchup on Friday, March 26. The team returns home to play La Salle Academy at 1:30 p.m. on Saturday, April 3.