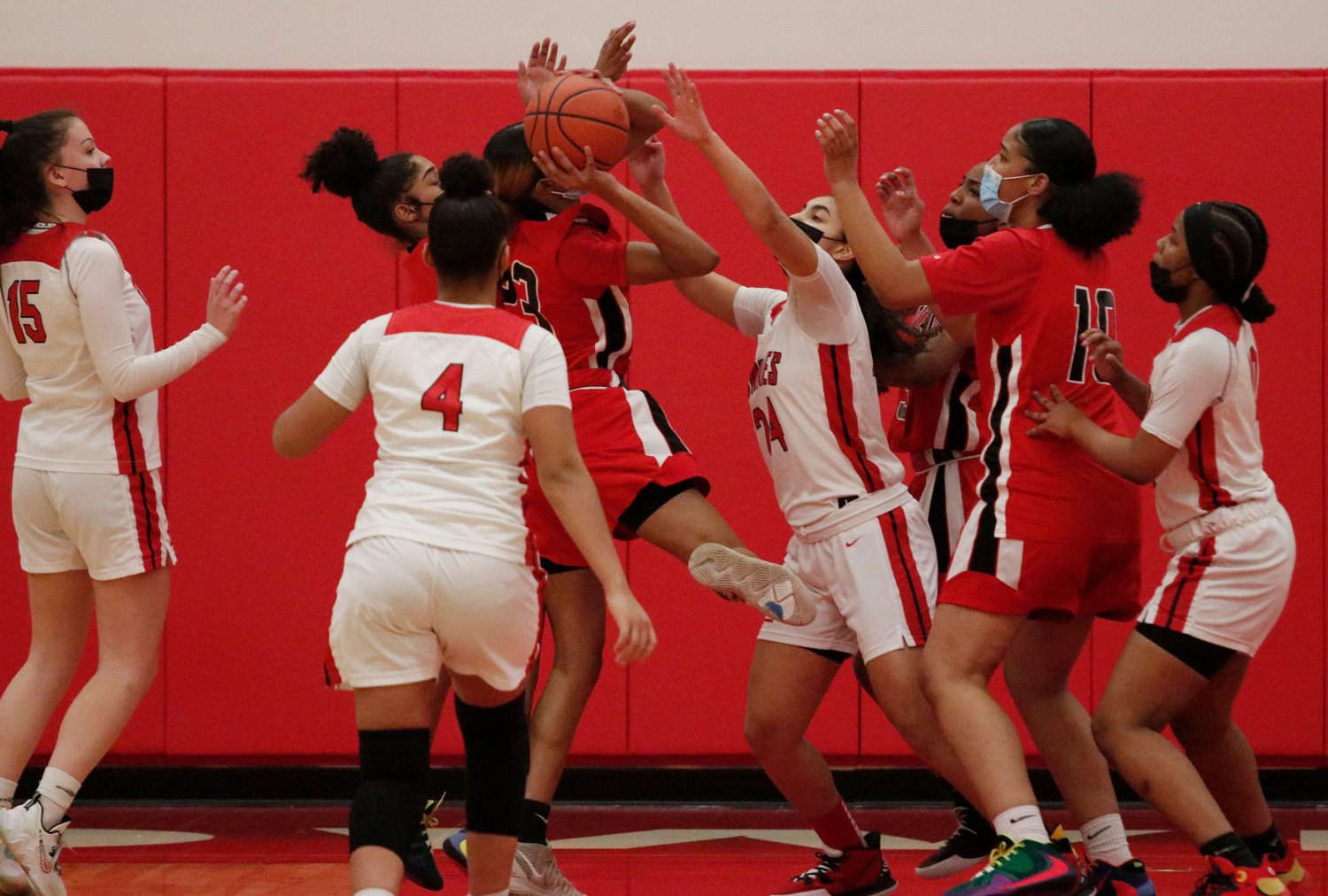 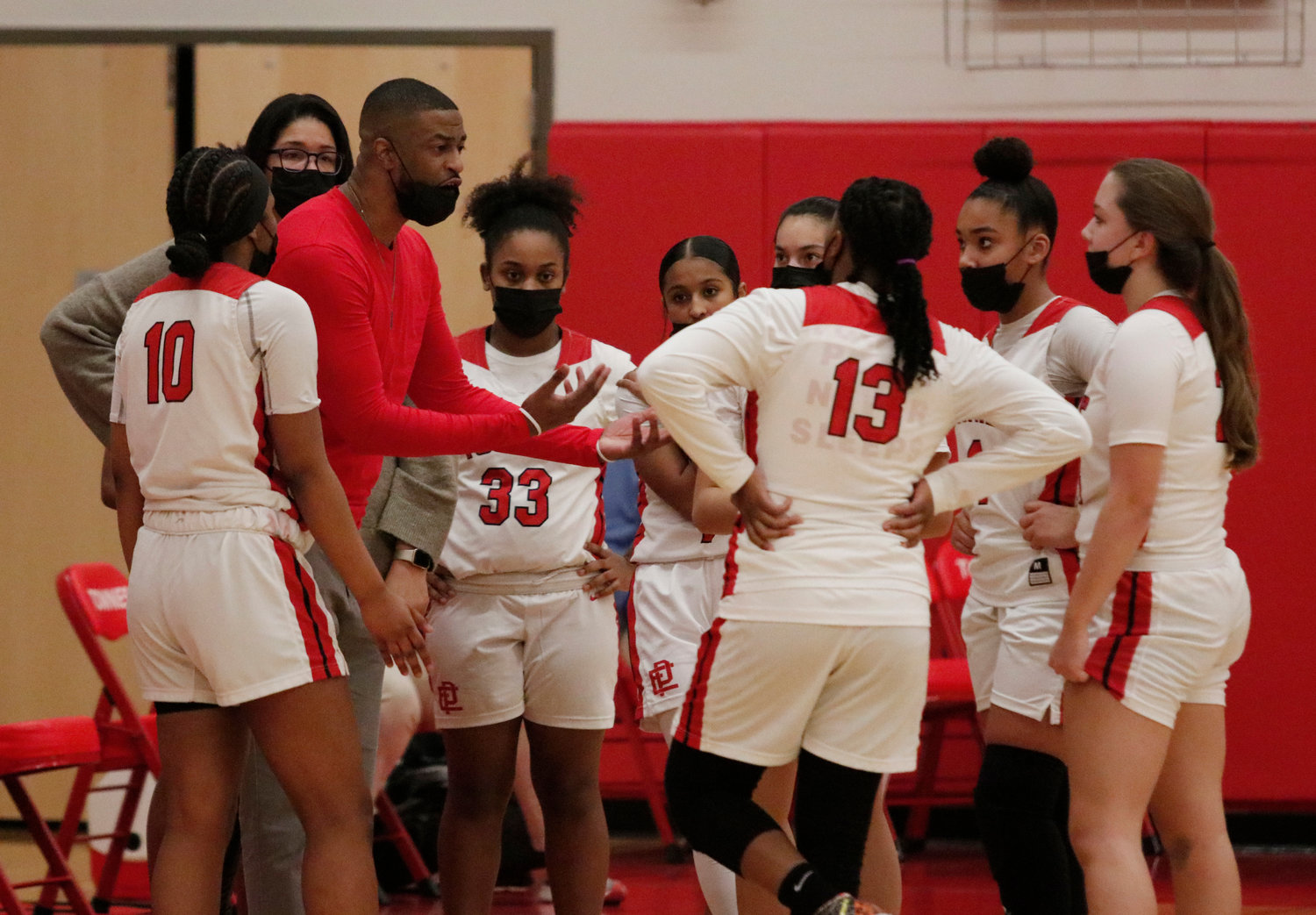 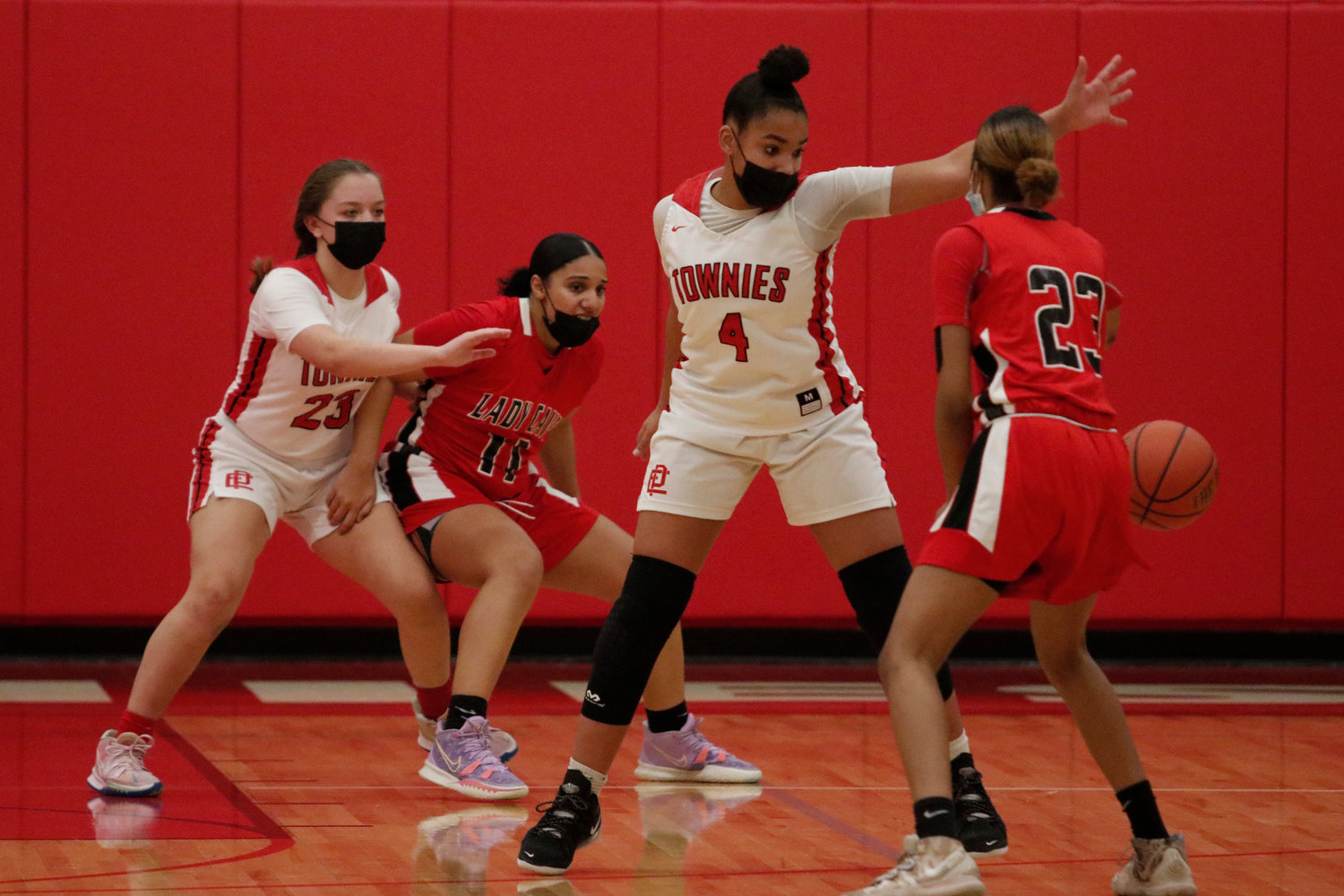 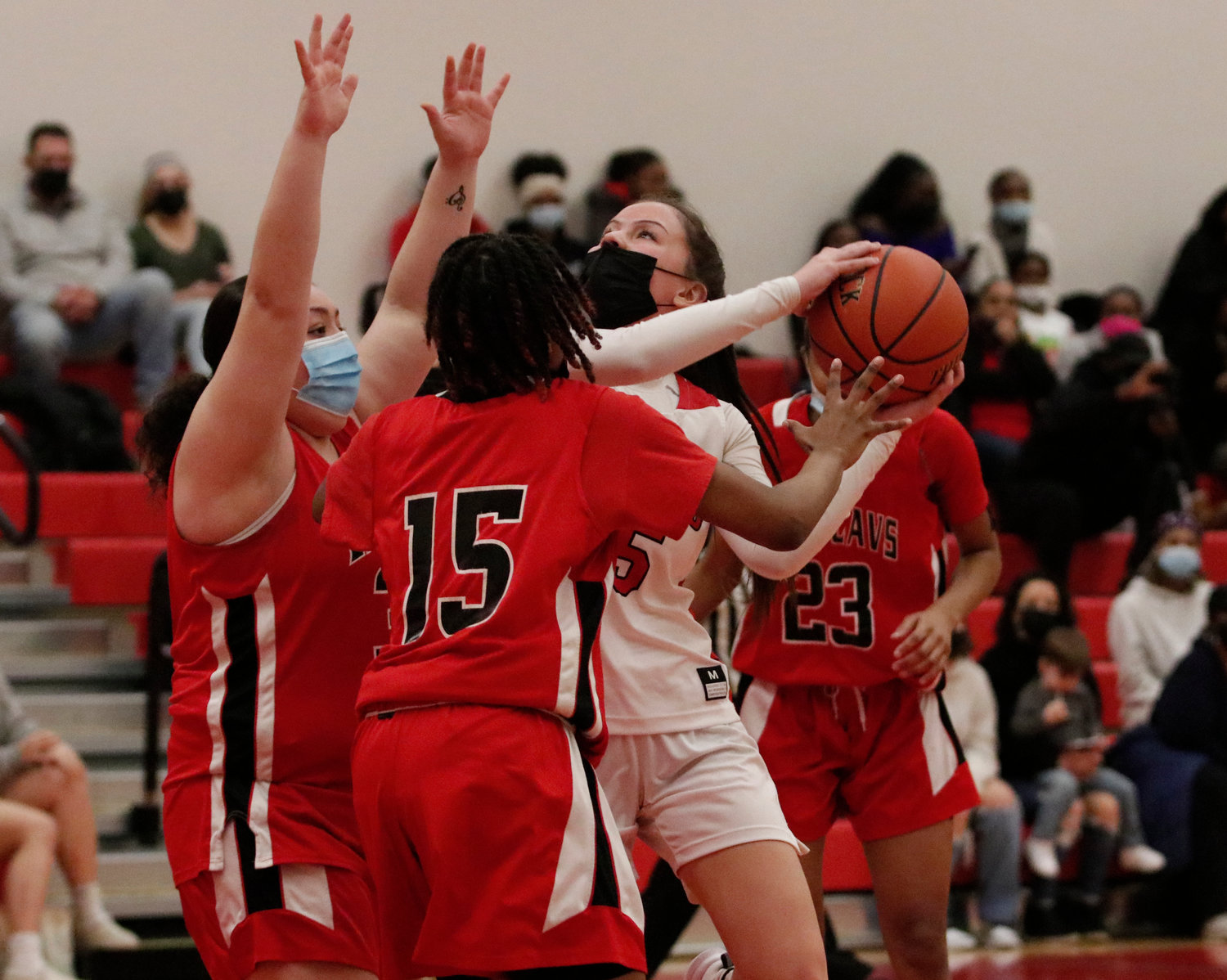 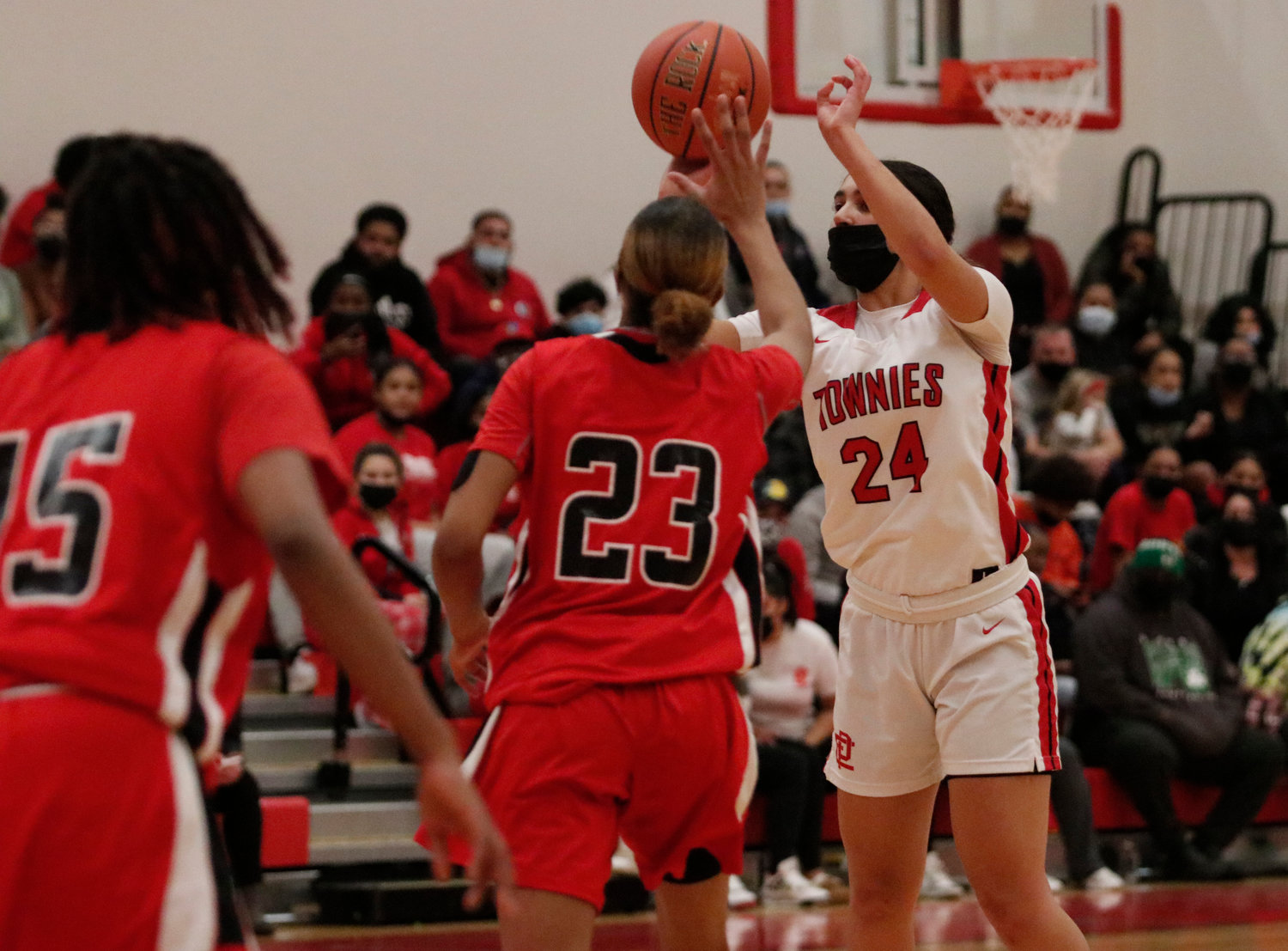 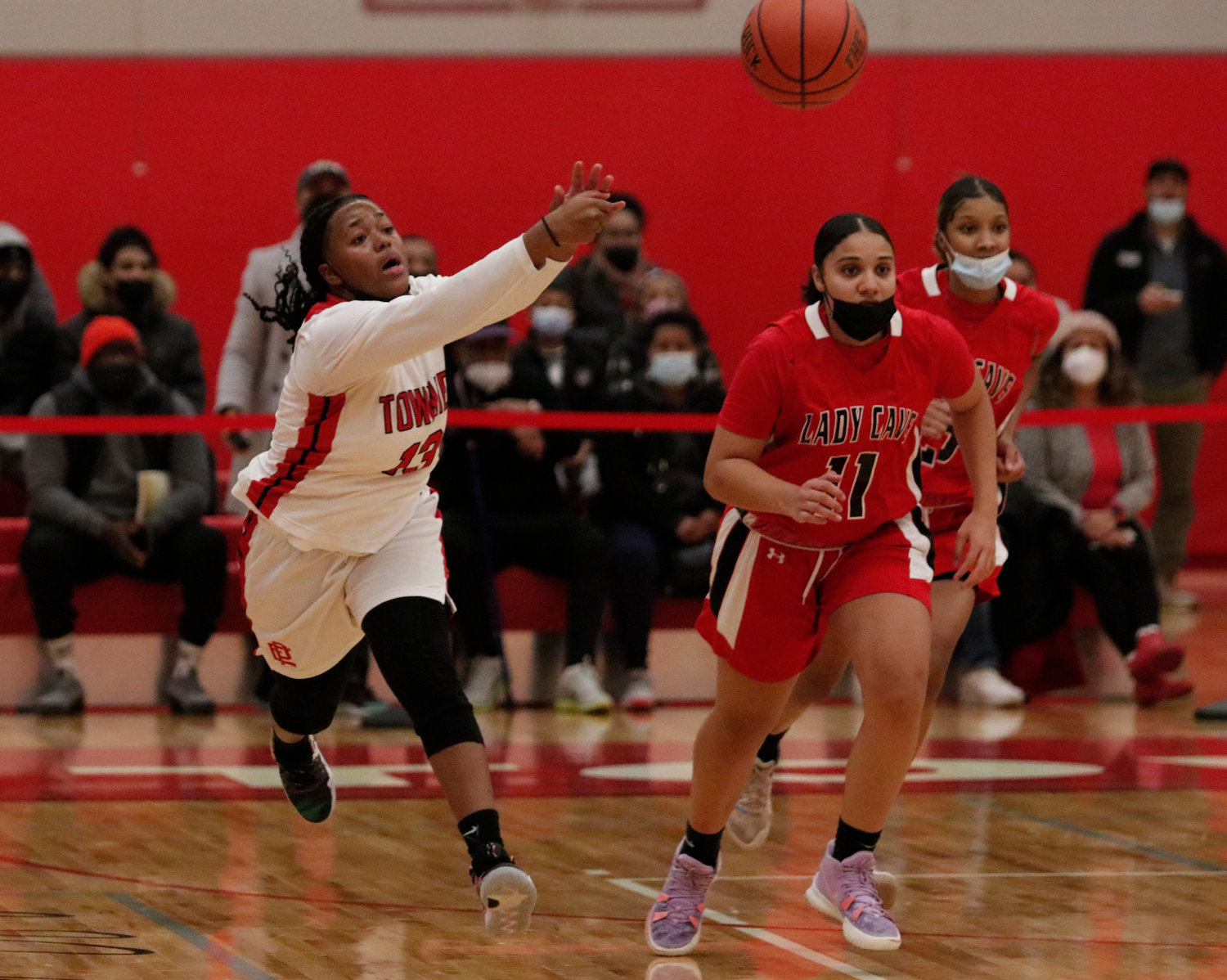 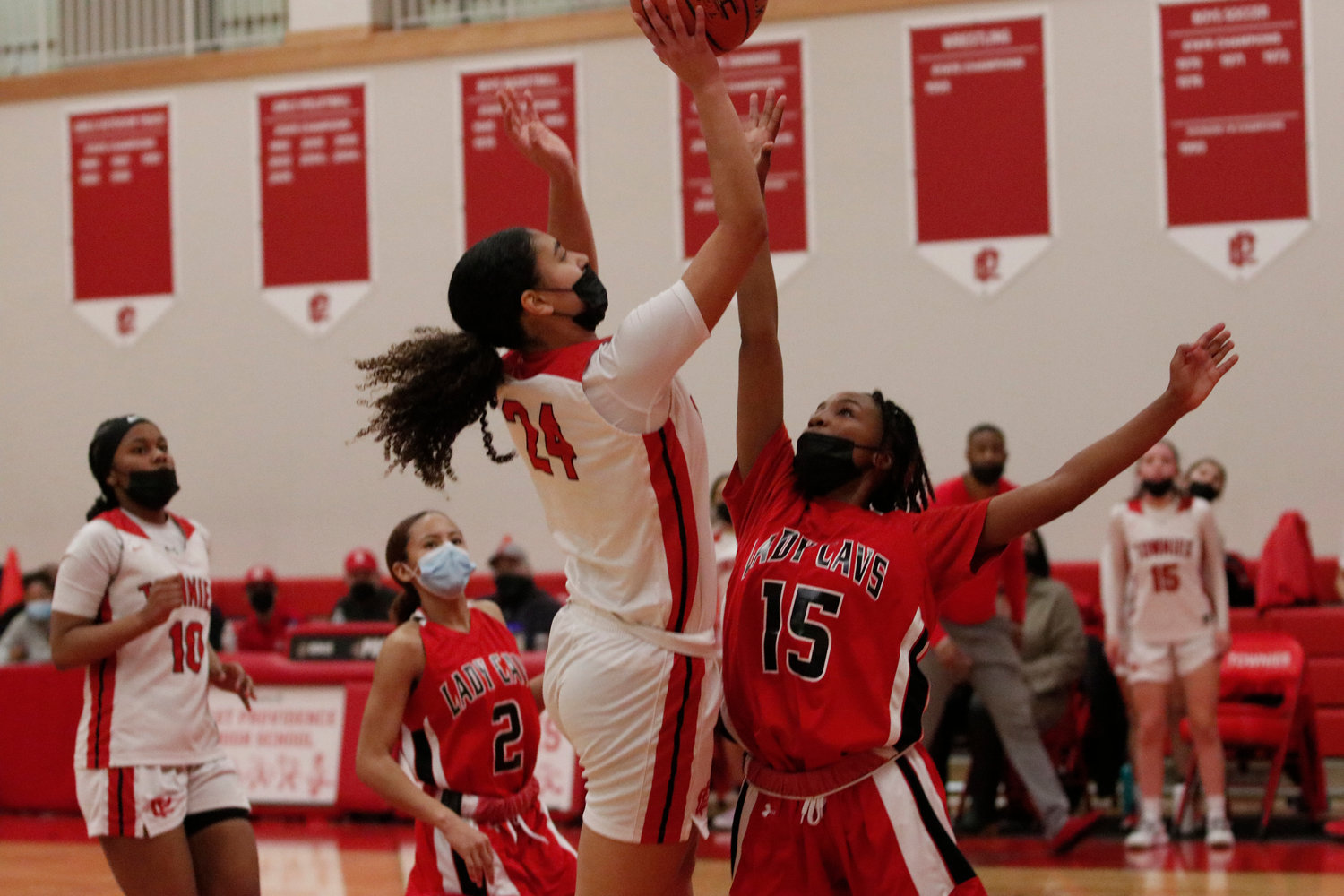 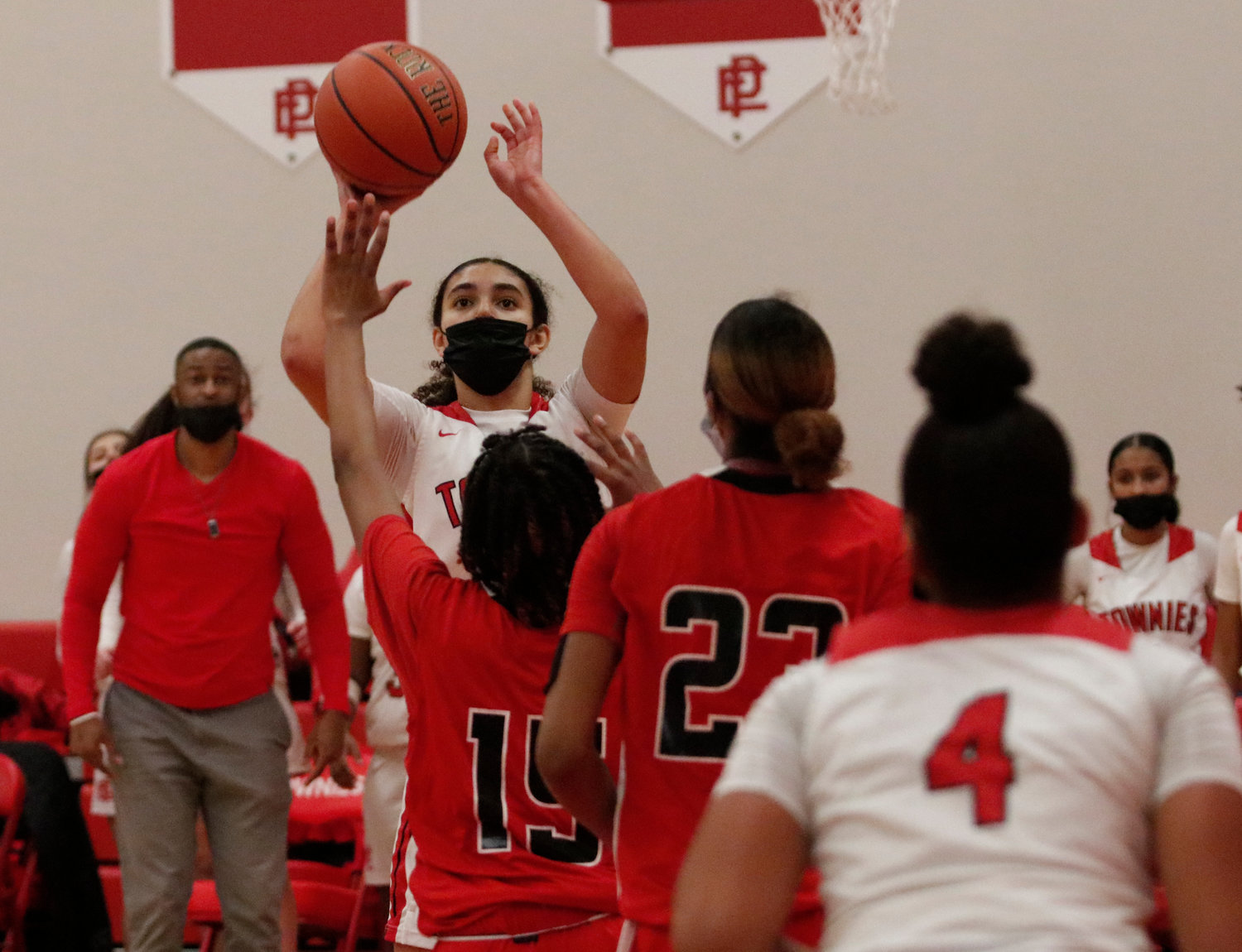 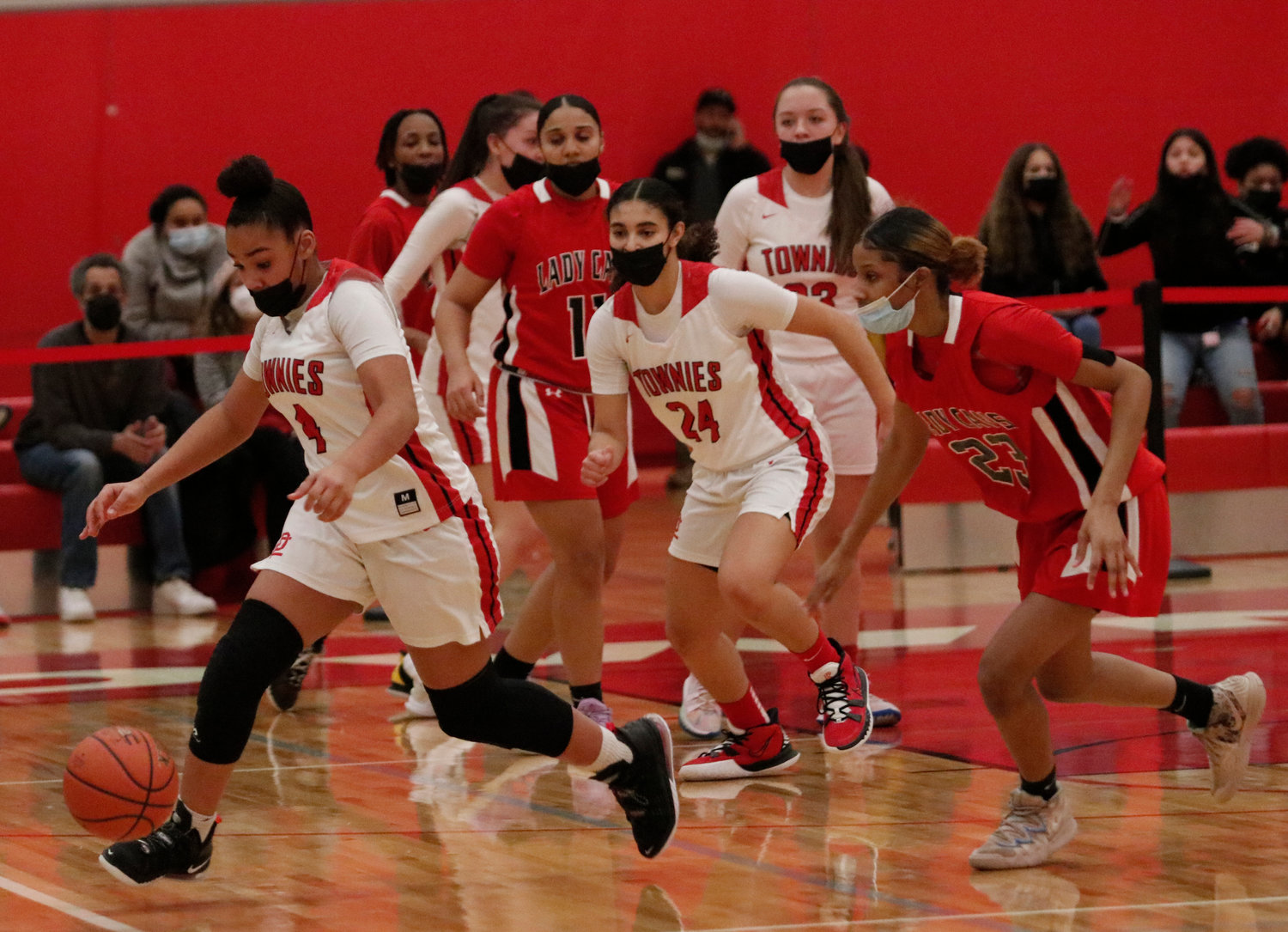 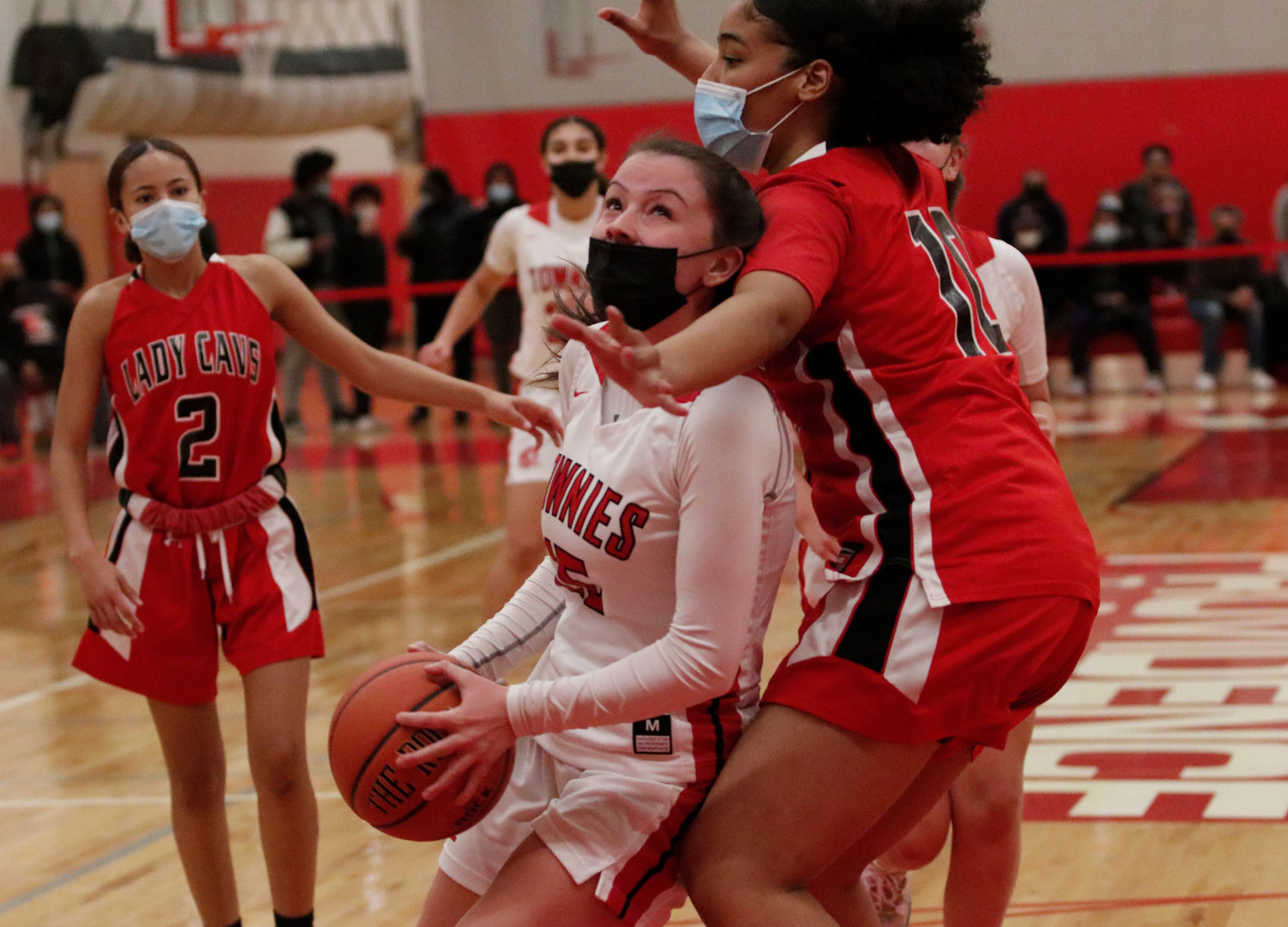 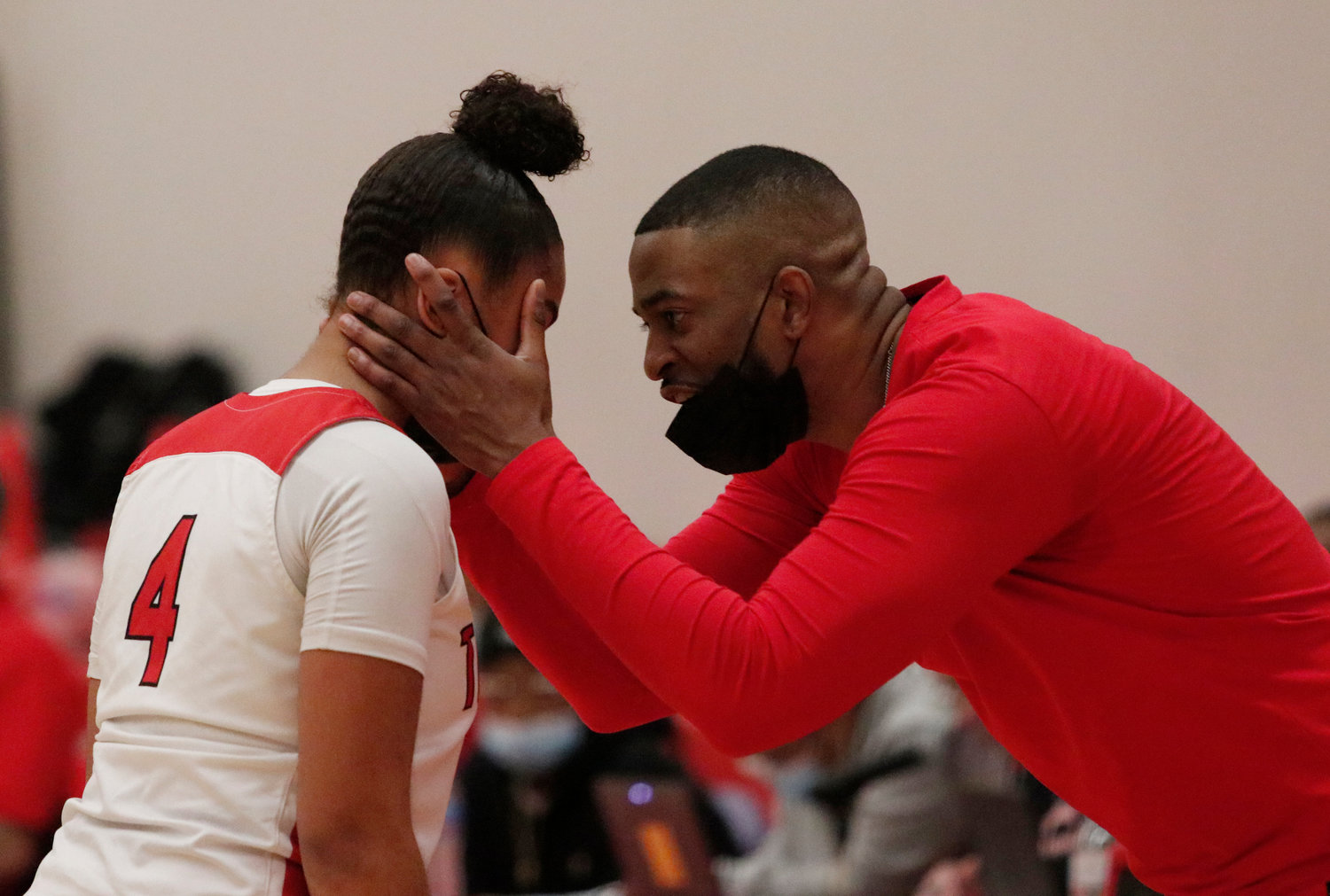 East Providence improved to 10-0 in the league while Sanchez slipped to 9-1. Breena Hannon led the Townies with 16 points. Mya Lambert added 15, including a personal 7-0 run putting her side in front for keeps late in the third quarter after the locals trailed 26-14 at intermission.

“Our youth showed in the first half. We were forcing things, taking ill-advised shots. We were making silly mistakes. We were nervous,” said EPHS head coach Bay Lambert. “We usually start off slow. We’re a second half team because of our youth and the adjustments I make at the half, but this halftime was different. By the time I got into the locker room the team was already taking accountability for themselves. (Senior) Jaliyah DaCruz gave them a speech of a lifetime. She told them to ‘do what we do…be ourselves.’ Then I told them it wasn’t about Xs and Os. (Sanchez) was just playing harder than us in the first half. I thought the game would be decided in the first two minutes of the third quarter, how we responded and we blitzed them.”

In a game where 14 combined points were scored through the first quarter, and where the Townies trailed by 12 entering the half (26-14), it seemed unthinkable that momentum would shift for East Providence and that they would be able to catch up to Juanita Sanchez.

The Townies and Cavaliers were two of three remaining undefeated teams in Division II play along with Rogers (8-0), yet it looked as if the Cavs would leap E.P. with a win and take over first place in the standings.

But East Providence opened up the third quarter on a 10-4 run through the first five minutes, and expanded it to 17-4 following a Cavaliers timeout, taking back the lead by one point. The Townies never looked back from that point, eventually outscoring Sanchez by a baker’s dozen, including Lambert’s solo spree, to take a 34-33 lead at the end of the period. Lambert hit a 3-pointer, a layup then a short jumper to put the Townies up 31-30 at the time. The go-ahead hoop followed a Hannon steal and an Ariana Ingram assist.

The offense came alive at the start of the third quarter, and carried through the end of the game as Hannon had 11 points in the second half. Lambert and Arianna Ingram combined for 19 points through the third and fourth quarters. They only had three combined points in the first two quarters.

“The moment wasn’t too big for them,” Lambert said of Townies’ second half response. “It was a great game, a great atmosphere for girls’ high school basketball. The crowd was wild. The place was shaking when we made that run. I think the team grew up. It was a big step for them to beat a tough team, a team we’ll probably see again later in the year.

Juanita Sanchez’s highest scores through the first half, senior Jayviona Smith and junior Sabanna Berrios combined for 20 out of the Cavaliers 26 points in the first half. In the second half, the pair had one layup between them. In the final minutes of play, Lambert put an exclamation mark on the win by swatting away a would-be three pointer from Cavaliers junior Chrismairy Victoriano.

Also of note, EPHS senior Makiah Denson, who showed up minutes before game time after attending her grandmother’s funeral earlier in the day, had a big impact in setting up plays. She finished with six points, eight assists and six rebounds. According to Lambert, Denson’s grandmother passed during the Townies’ victory against Cranston East a week ago to the day, Jan. 13.

The Townies return to action Tuesday night, Jan. 25, when they travel to the East Side of Providence to face Moses Brown. East Providence then hosts Mt. Hope on Thursday evening, Jan. 27. Both games tip at 6:30 p.m.

— Parent is an EPHS sophomore who contributes to the athletic department’s Twitter feed, @EPtowniesSports. With contributions from East Providence Post editor Mike Rego.

Ichabod and the Headless Horseman visiting BHS this weekend