Administration proposes some $3.1 million in expenditures

EAST PROVIDENCE — The City Council, at workshop held the last week of September, took its first in-depth look at the $3,131,725 Fiscal Year 2022-23 Capital expenditures budget as proposed by …

Administration proposes some $3.1 million in expenditures 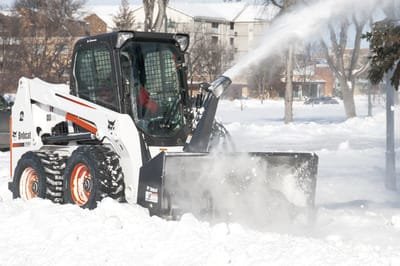 A "Bobcat" plowing a sidewalk with its snowblower attachment similar to the vehicles the East Providence DPW is requesting to purchase as part of the Fiscal Year 2022-23 Capital Budget.
Posted Monday, October 3, 2022 2:23 pm
By Mike Rego

EAST PROVIDENCE — The City Council, at workshop held the last week of September, took its first in-depth look at the $3,131,725 Fiscal Year 2022-23 Capital expenditures budget as proposed by the administration of Mayor Bob DaSilva.

Continuing on the multi-year, $10 million plan approved by the council seated in the fall of 2018, the administration is proposing $1 million to repair the “deteriorating” roads throughout the city. The administration is estimating the FY22-23 allocation as being the first of $5 million total to complete the endeavor over the next five years.

Department of Public Works Director Dan Borges said approximately $600,000 remains in the road repair budget as approved back in 2018. He said the $1 million proposed for the next fiscal year “would go very quickly.”

The effort to combat what he referred to as the “deplorable” condition of East Providence’s roads at the time was actually started by then Ward 3 Councilor Joe Botelho back in 2017.

Botelho initially wanted to devote the entirety of a line item devoted to synchronizing the city’s fiscal year budget with the state to roads. His colleagues then were hesitant, based in part on the pending new East Providence High School referendum, and decided to seed the road repair project with $2.5 million. In 2018, however, with the synchronization topic basically by that point off the table, the council earmarked the $10 million total.

More DPW requests
Asked about the proposal to purchase two “Bobcat” vehicles, including snow blower attachments, at a total cost of $165,000, Borges reiterated the explainer notes that apparatus were “necessary equipment for the purpose of maintaining sidewalks in the winter.”

The director estimated there are 4-6 miles of state-owned sidewalks, like on Pawtucket Avenue, that often fall on the city to maintain. He said the snowblower attachments make the vehicles much more efficient, especially when dealing with snowstorms of significance.

Also from DPW, in response to an inquiry by Ward 4 Councilor Ricardo Mourato about the status of the gazebo project at Willett Pond, Borges said the city is still awaiting Rhode Island Department of Environmental Management approval.

Borges added the city is planning to purchase the gazebo in the coming months so to have it ready when approvals are issued.

EPFD requests
The administration also suggested using American Rescue Plan Act (ARPA) funding for use of purchasing two new fire trucks each at a cost of $200,000: Replacement of Engine 4 (Foam Pump & Roll) and the frontline Engine 5 which was purchased in 2007 and is currently 15 years old. According to industry standards this should be in reserve status.

Current Ward 3 Councilor Nate Cahoon questioned the use ARPA, calling it potentially “short-sighted.” He suggested the federal funding should be used for something like what the city of Denver, Colo., is doing, where it is attempting to lure start-up businesses into empty store fronts by paying rental fees for a period of time.

The gathering being only a workshop, the council took no action on any of the items. Any approvals will take place as part of the public hearings on the budget scheduled over the next few weeks or at meetings with Capital items included on the agenda during the next fiscal year.

Fire Department
Final Lease Payments for Ladder Truck - $209,755. The final two annual payments for the lease of a new ladder truck are due in 2023 and 2024.
Replacement of Engine 4 (Foam Pump & Roll) - $200,000. This was partially funded in the 2022 Capital Budget and is a continuation of the cost to replace Engine 4.
Replacement of Engine 5 -$200,000. Replacement of the current frontline Engine 5 which was purchased in 2007 and is currently 15 years old. According to industry standards this should be in reserve status.
Planning & Economic Development
Tree Planting - $50,000. These funds would be used to plant trees throughout the City.
Public Art - $50,000. These funds would be used for public art improvements and installations as well as the cost of pieces of art from artists.

Treasury
New Office Carpet - $10,000. This funding is to purchase a new carpet which is over 30 years old and in need of replacement.

Carousel
Stabilization Phase 2 - $150,000. Phase two of the carousel's stabilization includes replacing the carousel's center bearing and top bearing. The bearings are worn and no longer functioning as designed in 1895. The City will be applying for a matching grant from the State Historic Preservation.