Here’s what we do like about the plan for two new sports fields at Haines Park:

1. The Town of Barrington is trying to do something to create more space for the thousands of children playing … 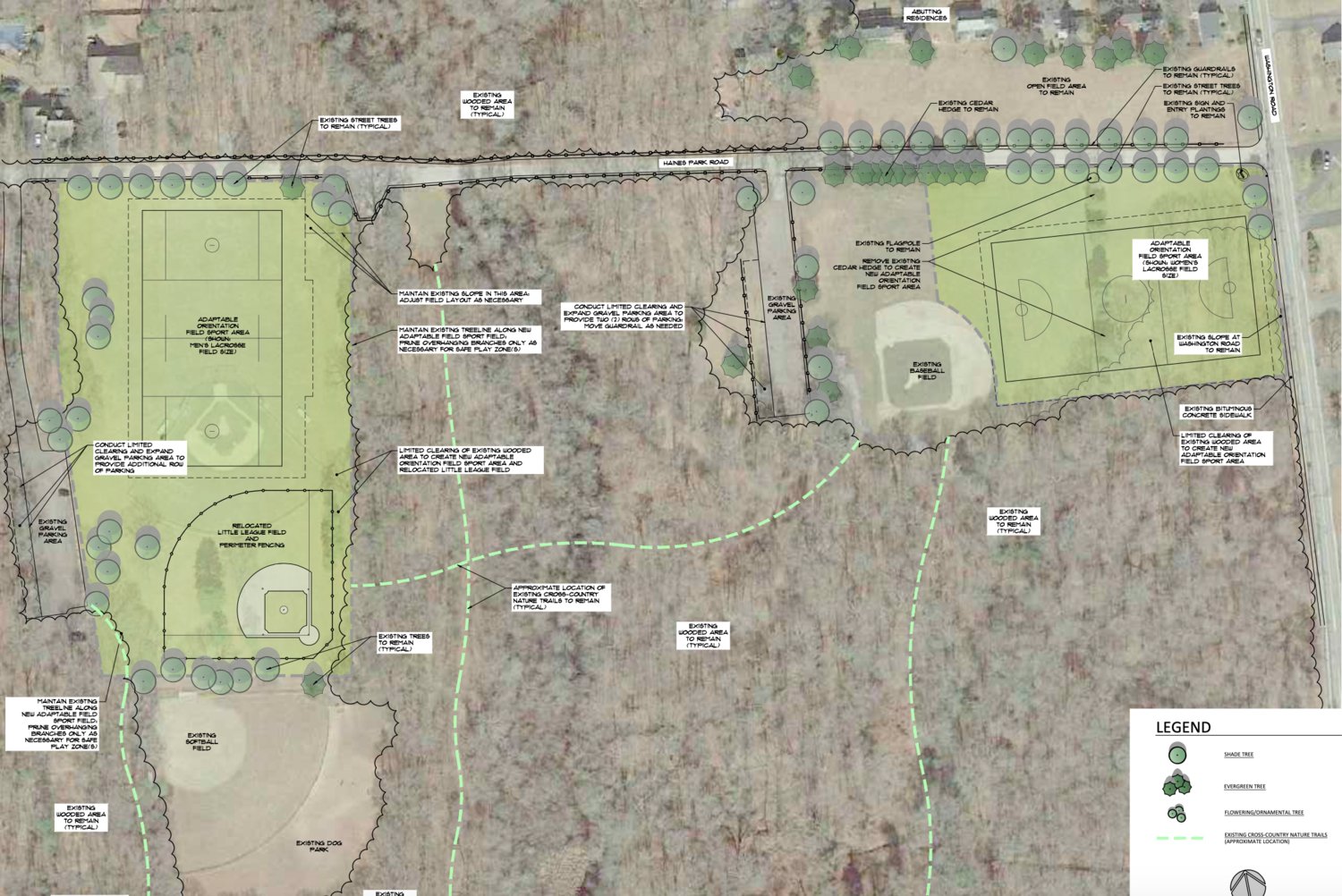 Here’s what we do like about the plan for two new sports fields at Haines Park:

1. The Town of Barrington is trying to do something to create more space for the thousands of children playing youth sports.

Here’s what we don’t like about the plan for two new sports fields at Haines Park:

1. It exacerbates the common Barrington problem of overlapping fields for competing sports. The town already relies on a multitude of spaces where baseball/softball fields overlap with multipurpose (soccer/lacrosse/football) fields. This is the case at the $64 million middle school complex, in four locations at Barrington High School, at Bicknell Park, and at Haines Park.

This dynamic creates scheduling tensions and confusion for the various sports leagues, which must alter their practice and game schedules to be sure baseballs don’t land on soccer players, and lacrosse balls don’t sail into softball players.

2. It exacerbates the common Barrington problem of shotgunning unlike sports fields all over town. Consider a league organizer or a referee coordinator. For everything they do, the scattered field arrangements reduce efficiency. They can’t cluster teams or coaches or refs or families at any single complex or collection of fields. They must simultaneously plan, schedule and manage in multiple locations at all times.

Consider the family of three sports-playing children. On any given weeknight or weekend day, they must zig-zag all over town to reach practices at a multitude of locations, or watch and support children playing in different places at overlapping times.

Sports-centered facilities — meaning, a collection of similarly-purposed fields grouped into the same locations — would create efficiencies for everyone involved.

3. The town’s plan uses a lot of money for relatively little return. Estimated at nearly $2 million (and we’re not sure how confident anyone should be in that estimate — see below), the plan relocates one baseball field (no net gain), creates one new multipurpose field with minimal improvements to a horrendous parking situation, and creates another multipurpose field that overlaps with an existing baseball field.

4. The aforementioned “new-field-overlapping-with-a-baseball-field” would place a lacrosse goal and end line a few feet from Washington Road. We don’t love the idea of young kids chasing lacrosse balls into a state highway — nor the aesthetics of a fence or backstop running along the road in a nice residential area.

5. The design was sketched by a landscape architect, more than two years ago, in a no-bid project doled out by the former town manager, and it has never been brought before a public meeting for a substantive presentation and question-and-answer period. It was discussed at a Parks and Recreation Commission meeting attended by almost no one. It was also on the agenda at a Barrington Town Council meeting and included in a recreation discussion that was almost entirely dominated by advocacy for new pickleball courts. The Haines Park plan has never been brought before its own public hearing for input and feedback.

6. The Town did the right thing when creating an ad hoc fields committee to study and make recommendations for long-range improvements to the sports fields in Barrington. Then the committee itself and the former town manager handcuffed those efforts.

The committee exhausted most of its energy dreaming up a massive artificial turf proposal for Barrington High School and gave short shrift to the Haines Park proposal. The Town, specifically the former manager, hired a landscape architect through a no-bid process, endorsed that one person’s design himself, used it to secure a long-term lease for Haines from the State of Rhode Island, and then handed it to the fields committee as something to consider. Predictably, the committee gave a lukewarm and unclear endorsement of the plan, without listing it among the formal recommendations in its final report. It makes sense, since it wasn’t actually their plan; it was Jim Cunha’s plan.

7. We are not aware of any formal effort to solicit feedback from the neighbors and abutters of Haines Park, some of whom have been vocal in the past about both usage and expansion of usage at that facility.

8. The Town is ready to push this plan forward without any clear vote of approval from the taxpayers of Barrington. Why? Because it does not need approval. The town is planning to use pandemic-inspired, federal stimulus funds that are already in hand. No public review or approval is needed. We think that is poor practice for any public works project, especially one estimated at nearly $2 million.

We understand there are legitimate counterarguments to be made. One could easily say, “what’s wrong with new fields that don’t cost us anything?? — Even if they’re not perfect, they’re better than nothing!”

We believe that is too shortsighted. If this project moves forward, the town will continue to maintain one of the worst collections of sports facilities in the state, even after its $2 million investment.

By “worst,” we refer to the combination of many factors — access, parking, facilities (restrooms), seating, grading, turf and drainage. Here are snapshots of current sports fields conditions in Barrington …

We require grandparents to haul their own folding chairs to watch their Division 1-bound, high school varsity grandchildren play sports like field hockey or lacrosse.

We congest the Haines Park access road so badly that a rescue could not reach an athlete with a serious injury.

We have parent volunteers from the lacrosse and soccer leagues screaming at each other over scheduling conflicts.

We force parents to scatter their young children to multiple fields in multiple locations at the same time.

We ban our young athletes from playing on water-logged fields, often when the rest of the state is playing games.

We ask high school athletes to sell popcorn or cookie dough to all their grandparents and neighbors, so they can raise their own money to rent artificial “turf time” practices at other high schools, then drive 35 minutes away, just so they can get just a smidge of experience on the surface they use for nearly every away game. On that last point, everyone should know that a car full of high school girls, driving themselves to a “turf time” practice in North Seekonk (no buses for these practices) were involved in a horribly scary accident while crossing Route 6 near dusk on a busy weeknight last fall.

There are so many reasons for this town to develop a truly comprehensive, long-range plan for its sports facilities. That plan may take a decade to realize, and most of those who help develop it would probably never directly benefit from it. But it is still the right thing for Barrington.

This town deserves a high school facility that would be expected at one of the premiere academic settings in the region. It deserves small, sport-centric complexes that make scheduling and managing leagues easier. It deserves quality fields that complement each other, drain well and are easy to access.

This Haines plan does little to address the town’s long-range needs. It simply continues the scatter-shot approach to sports management in Barrington.

Editorial: Still waiting for ‘why’ on Barrington school plan