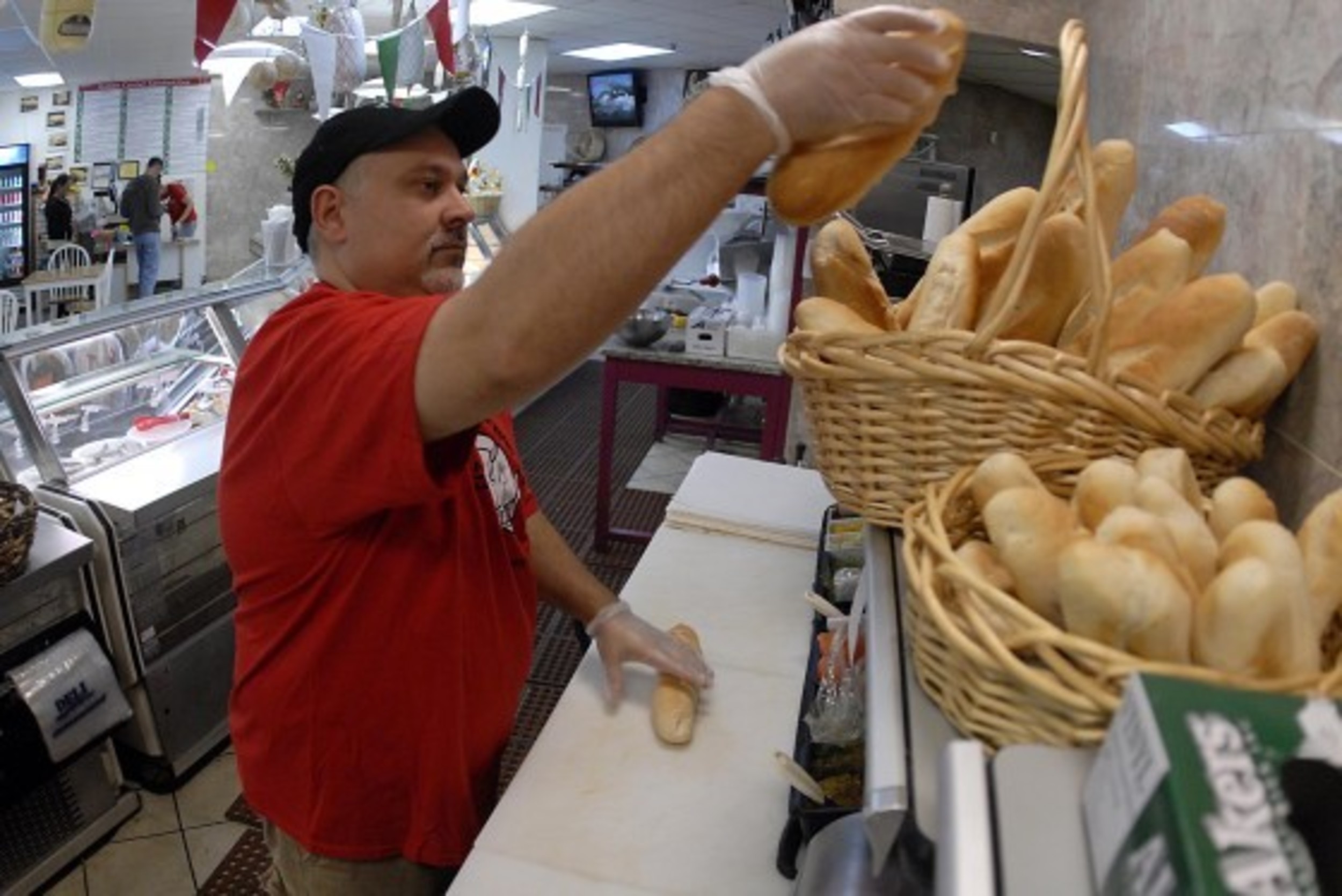 Owner Osvaldo Pirro, along with his brother-in-law, chef and store manager Massimo Dellolio, got the full "Fieri" treatment,

"It's definitely a big deal," Mr. Dellolio said the next afternoon at the end of another busy lunch service. "It was a great experience. We had to get picked to be on the show, which is thanks to our customers and our staff. It certainly opens the door to a lot of opportunities. Now it's up to us to maintain our high quality and satisfy every customer that walks through the door. It was definitely an honor."

The Italian Corner was featured in the second half of the episode, entitled "Handcrafted." The segment began with Mr. Fieri getting a look at the front-end of the establishment with its prodigious deli case and market-like shelves of products imported from Italy. The gregarious bleached-blonde, spiked-haired host referred to the area as a "Disneyland" of food.

Mr. Pirro told Mr. Fieri, "We want to show (our customers) what real Italian is."

Next, Mr. Fieri was treated to a taste of one of the deli's specialty sandwiches, "brasato" or brazed top round angus beef. Mr. Dellolio later prepared, again from scratch, meat tortellini and bolognese sauce, both of which are offered for purchase daily and also served Saturday night's when the deli turns into a sit-down eatery.

Mr. Fieri was so enthralled by the process and machinery that went into making the tortellini he was shown taking a picture with his cell phone. The photo is currently on his website.

Mr. Fieri also asked Mr. Pirro why he did not operate a full-service restaurant to which the latter replied, "It's too much work. I don't want to get killed."

Mr. Dellolio, like Mr. Pirro a native of Milan, Italy and now a Bristol resident, said a third dish — broccoli rabe, sausage and orecchiette (ear-shaped) pasta — was prepared, but not featured in the segment. Only the sausage is made on site, which Mr. Dellolio said did not quite fit with the "Handcrafted" theme of the show.

"They selected the items," Mr. Dellolio explained. "I think the reason why they chose to show what they did was because everything in those dishes are 100 percent homemade."

The actual shooting of the segment took place over three days during the last week in May. Prior to the production crew showing up, staffers meticulously went over every detail of the Italian Corner's history and products. Mr. Fieri, whose ties to Rhode Island are deep with his wife, Lori, being a native of the Ocean State, made the final call to showcase the local eatery.

"We did three different phone interviews. We were on the phone with them for a total of about nine hours. They want to know everything about you, including your shoe size," Mr. Dellolio quipped, referring to the producers' pre-interview process.

Mr. Pirro opened the deli in 2005. He had more than 30 years of restaurant experience, but actually came directly to it from time as owner of a computer company. Mr. Dellolio, who had learned his culinary skills in Milan, had joined his brother-in-law in the computer business and naturally came with him to the deli.

Their new venture actually grew from Mr. Pirro's original concept of attempting to sell authentic Italian food products on-line with a small store front. Instead, the deli, located at 10 Boyd Ave. and the intersection of Warren Avenue, has gradually blossomed into a quite prosperous endeavor.

"Octavio has 30, 40 years of restaurant experience. We both grew up with this food," Mr. Dellolio said. "We struggled at first because East Providence isn't known for Italian food. But we've worked under the slogan of 'La Vera Italia,' the real Italy. And I say don't just eat fresh, eat fresher. We're proud to serve authentic and original Italian cuisine."

With the recognition it received from being on "Diners, Drive-Ins and Dives," the already-thriving Italian Deli is only expected to get even busier.

"I've already seen a lot of new faces," Mr. Dellolio said of the Tuesday service. "I would say about 75 percent of the people said they saw the show and about 50 percent of those people were new customers."

The Italian Corner doesn't know exactly the kind of bump in business it will get from the show, but it should be significant according to the producers.

"They actually apologized for doing this to us," Mr. Dellolio said. "They told us the places that have been on the show have seen anywhere from a 200 to 2,000 percent spike in business following their appearance. They put us in touch with a similar-type place in Baltimore. They kind of told us what to expect."

Mr. Dellolio said in anticipation of the increased traffic changes have been made in the business, many in the back-part of the store but also with the hiring of additional employees and the creation of promotional materials like logo-emblazoned t-shirts.

"We see it as an investment. It's really just a wait-and-see kind of thing," Mr. Dellolio added. "But we've been presented with a great opportunity. It's up to us to take advantage of it and bring this place to an even higher level."