There was tight security at Bristol’s Quinta-Gamelin Community Center on Monday, Dec. 28, as the first COVID vaccines were administered to Emergency Medical Services (EMS) personnel and home … 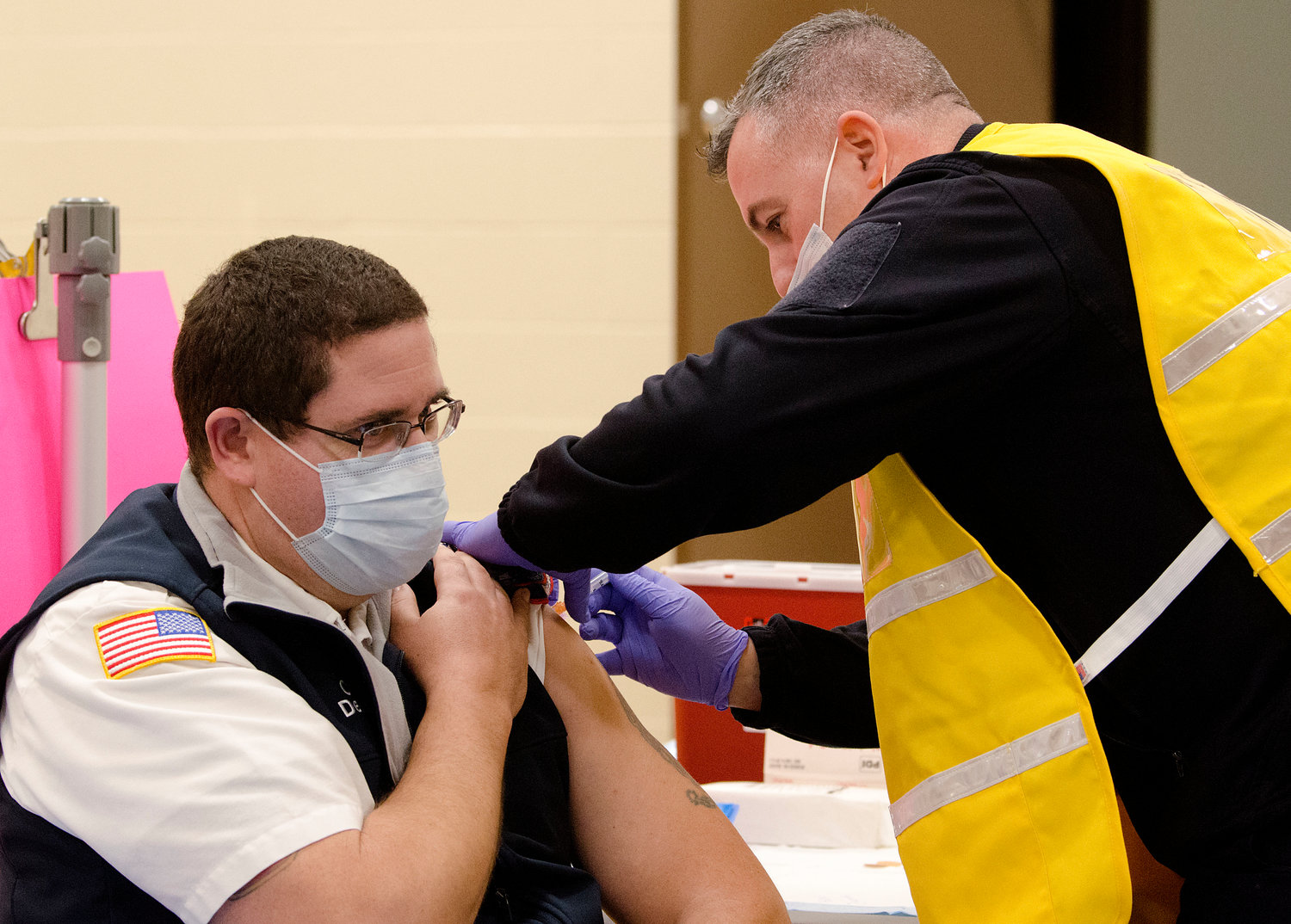 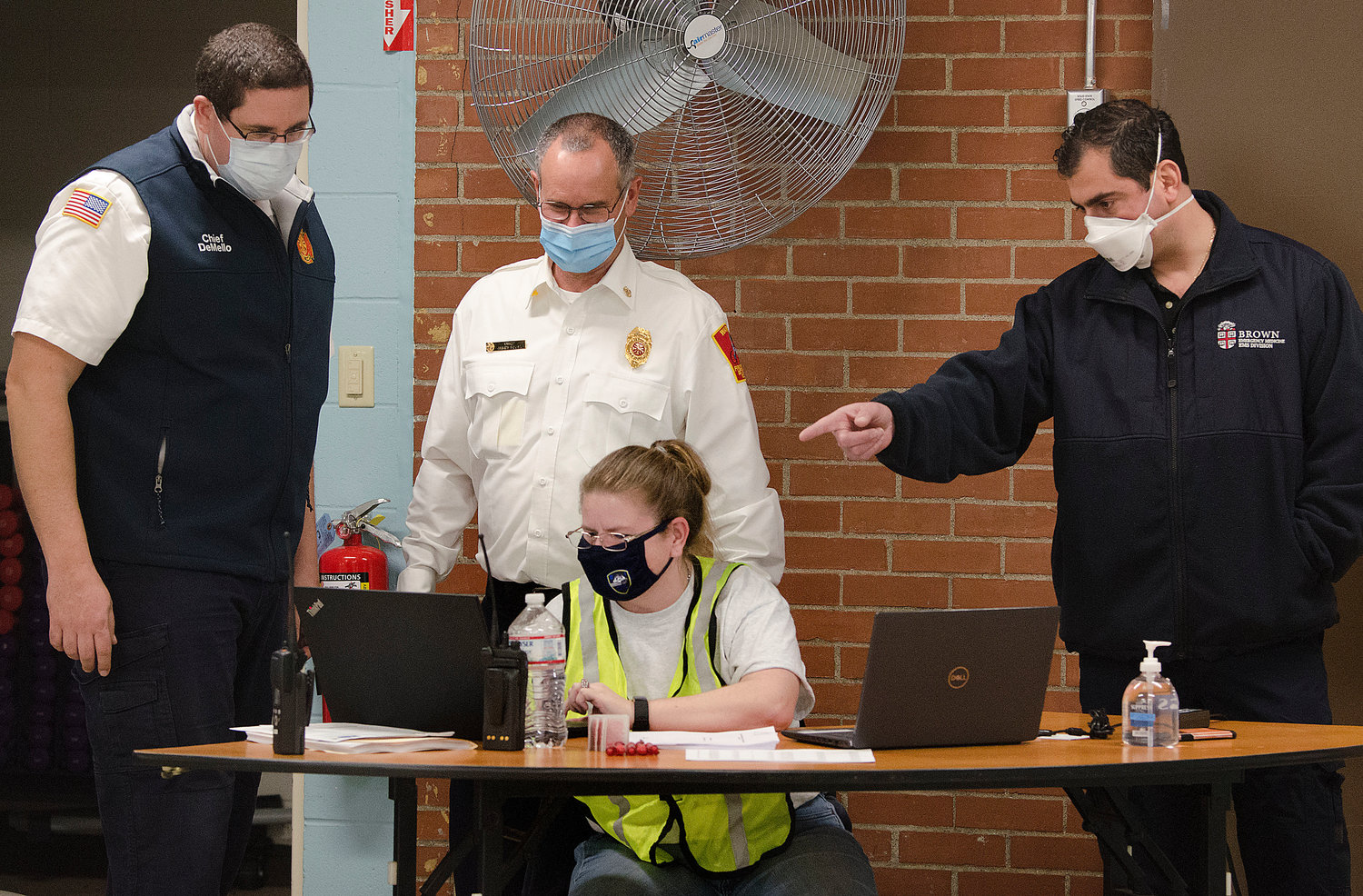 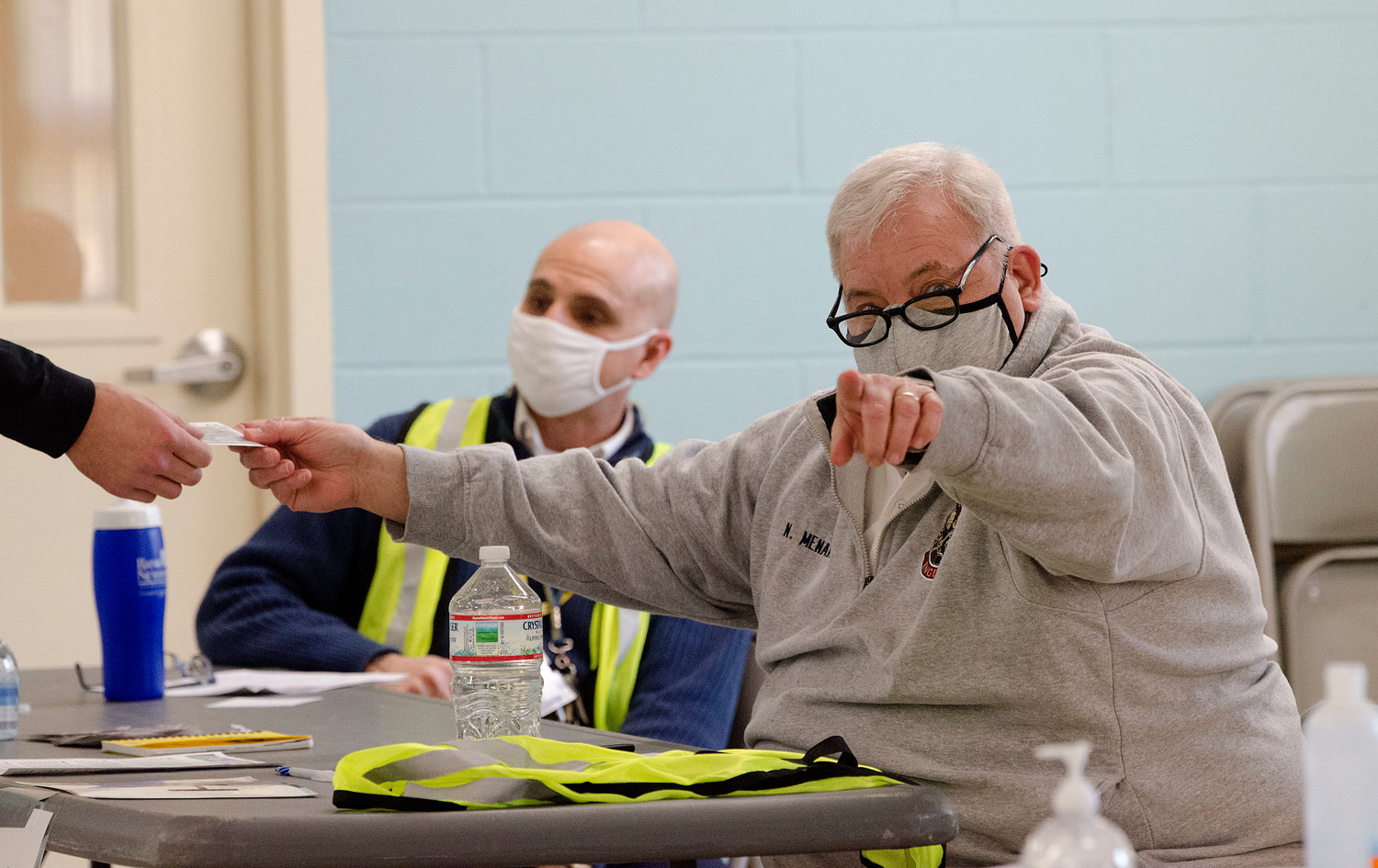 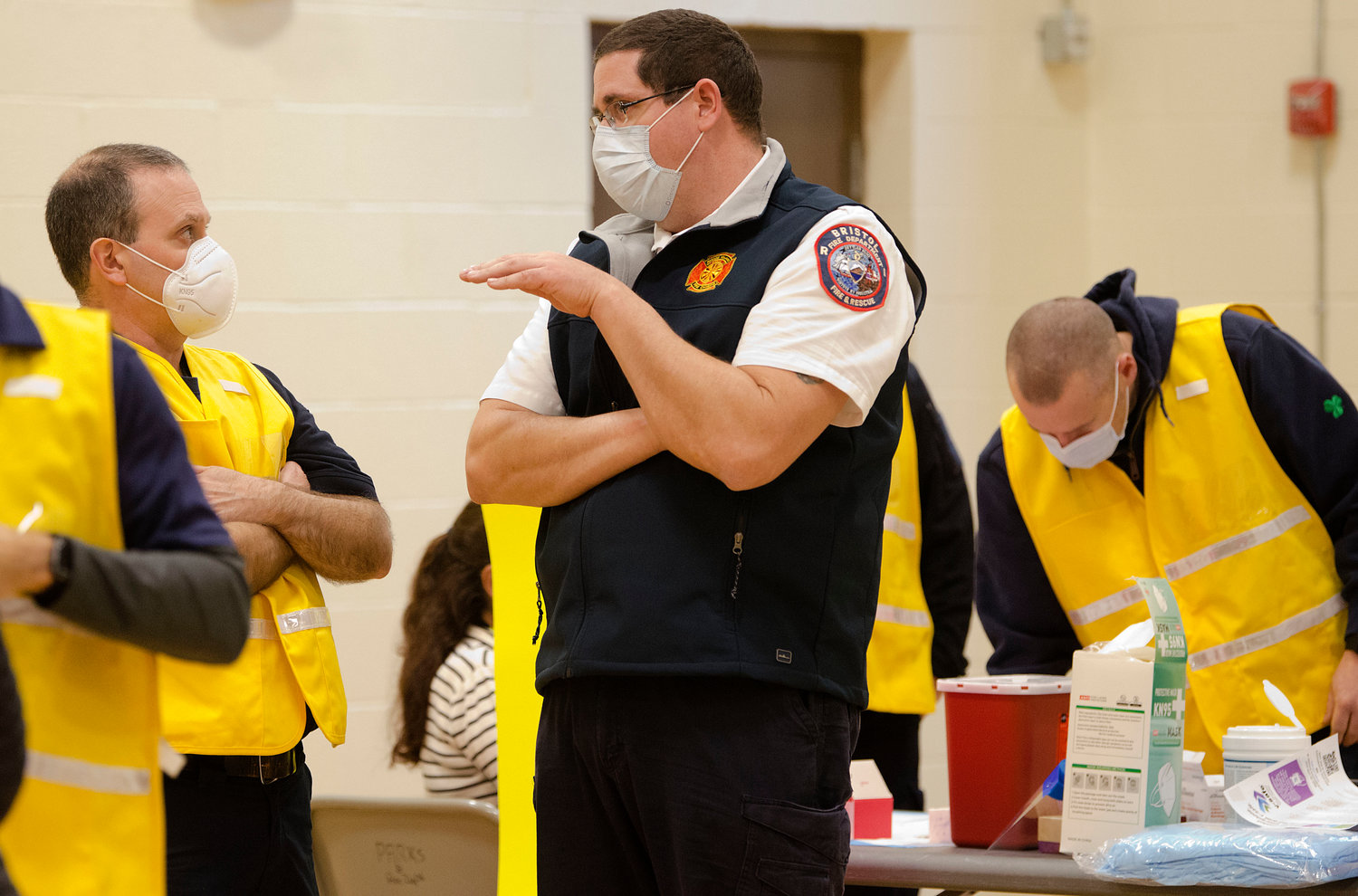 Bristol Fire Chief Mike DeMello gives instruction to EMS volunteers as the first day of vaccinations comes to an end.
Previous Next
Posted Wednesday, December 30, 2020 10:03 am
By Christy Nadalin

There was tight security at Bristol’s Quinta-Gamelin Community Center on Monday, Dec. 28, as the first COVID vaccines were administered to Emergency Medical Services (EMS) personnel and home health case aides, the essential workers at highest risk of contracting COVID-19, based on the order recommended by the Centers for Disease Control (CDC) and the Rhode Island Department of Health.

Eligible personnel were contacted and provided a registration link to sign up for a time slot, after filling out a form including a standard vaccine questionnaire and consent form. Bristol County and Newport County are teaming up for this initial push, with each local fire department signing up for shifts to administer the vaccine to fellow first responders.

“Rolling it out like this is really a force multiplier, giving us a pool of several hundred people who can then turn around and vaccinate others,” said Bristol Chief Mike DeMello, who has been spearheading the effort with other local fire chiefs.

Monday’s clinic featured the Moderna vaccine, which is the preferred one currently, due to the fact that it can be stored at a standard freezer temperature and does not require premixing.

“Today went very well for the first clinic,” said Chief DeMello. “We did a seasonal flu clinic about three weeks ago — that was a good trial run.”

Chief DeMello reported that there were some hiccups with the online registrations system, but they were quickly resolved. Otherwise, things went well.

“Everyone today came through with no reactions, there have been no complaints of anything,” he said. “We administered between 280 and 300 vaccines today. We did see a little extra in a couple of the vials so were able to squeeze in a couple more people; we did not leave any lying around.”

Another bit of good news: police thought they were going to have to wait until the second wave of vaccinations, likely in late January, but at the last minute the health department found they had enough to to open this first wave up to police and non-EMS fire personnel (Bristol and Warren volunteers).

Chief DeMello was hopeful that the enthusiastic response to this vaccine by first responders will help sway the opinion of vaccination hold-outs in the general public. “I think it will help allay some of the public trust issues around the vaccine, when they see we are having no crazy reactions,” he said. “Like any medication, there will be some reactions out there, but after the second dose people will be 95 percent immune and that’s where we want to be.”

It’s all about the supply

“We have a few other days scheduled, but it’s all daily, based on how much we get. We might luck out and get a couple extra doses,” said Chief DeMello. “We’ll be here for a few days over the next couple of weeks, but when and how long will depend on the supply we get from the state.” That is information they only get on a day to day basis. When they are done, they hope to have immunized about 1,000 local first responders and home health care workers.

“After that, we will be looking for guidance from the state. When they will open up to other groups, I don’t know,” said Chief DeMello. "RIDOH will let us know, and it’s all based on availability.

“At the same time, CVS and Walgreens are vaccinating nursing homes, and hopefully that will get out to pharmacies, and then to primary care physicians, as more and more becomes available. We’re in this for the next six to nine months."

In a Tuesday afternoon media call, health department Director Dr. Nicole Alexander-Scott outlined the entire cohort of roughly 150,000 individuals who will be given the opportunity to be vaccinated in Phase 1.

“We are vaccinating in a way that is responsive to the way COVID is impacting different communities,” said Dr. Alexander-Scott. Accordingly, there is an effort to reach as many nursing homes in the hardest-hit zip codes in the earliest days of this effort. In addition to medical, emergency, and public safety personnel, nursing home and ACI residents and staff, and residents over age 75, Phase 1 will also include dentists, morticians, and the residents of Central Falls.

The health department is also currently sorting out the logistics of another disparate Phase 1 group: residents over age 75 who do not live in a congregate care setting.

Though there are several tiers of recipients in Phase 1, due to the fact that the vaccine is simultaneously being delivered in medical facilities, congregate care settings, and through municipal partners, all tiers of Phase 1 are being approached simultaneously, as vaccine supplies allow.

The supply expected by the health department, for the foreseeable future, is about 14,000 units a week, or enough to vaccinate about 1.5 percent of the population.

The health department is in the process of determining who will be included in the much larger Phase 2 group, which will focus on  critical infrastructure workers, likely including teachers, and people of all ages with significant health concerns. Other high-risk communities will be factored in as well.

“We will be working one zip code at a time to capture people who might otherwise not be captured [by a congregate care or employment vaccination opportunity],” said Dr. Alexander-Scott.

Despite Operation Warp Speed’s nationwide goal of 100 million vaccinations by the end of 2020 apparently falling short by about 80 percent, health department officials are not discouraged. According to Alysia Mihalakos, chief of the Center for Emergency Preparedness and Response, “100 million was a very lofty goal,” and compared to other vaccine processes, the COVID-19 vaccination has been rolled out much faster than officials anticipated.

As far as compliance, or uptake, as the health department is calling the non-mandatory reception of the vaccine, it is very high among doctors and hospital staff statewide. Uptake has not been quite as high among nursing home staff, but that data may be skewed by the fact that it was recommended that facilities with limited staff take a staggered approach to staff vaccinations, so that in the event that the vaccine leaves anyone feeling under the weather, it won’t cause staffing issues. The state hopes that all staff and residents of all nursing homes statewide will be in receipt of their first does within the next three weeks.

The health department is also hopeful that vaccine manufacturers will be able to ramp up production. If so, they’ll be ready. “As we are receiving it, we have a strong plan in place to get it out as quickly and efficiently as possible,” said Dr. Nicole Alexander-Scott.