People waiting for the East Bay Bike Path bridges to be replaced will need to wait longer — maybe a lot longer.

During a radio interview on Thursday, April 1, Rhode Island Department of … 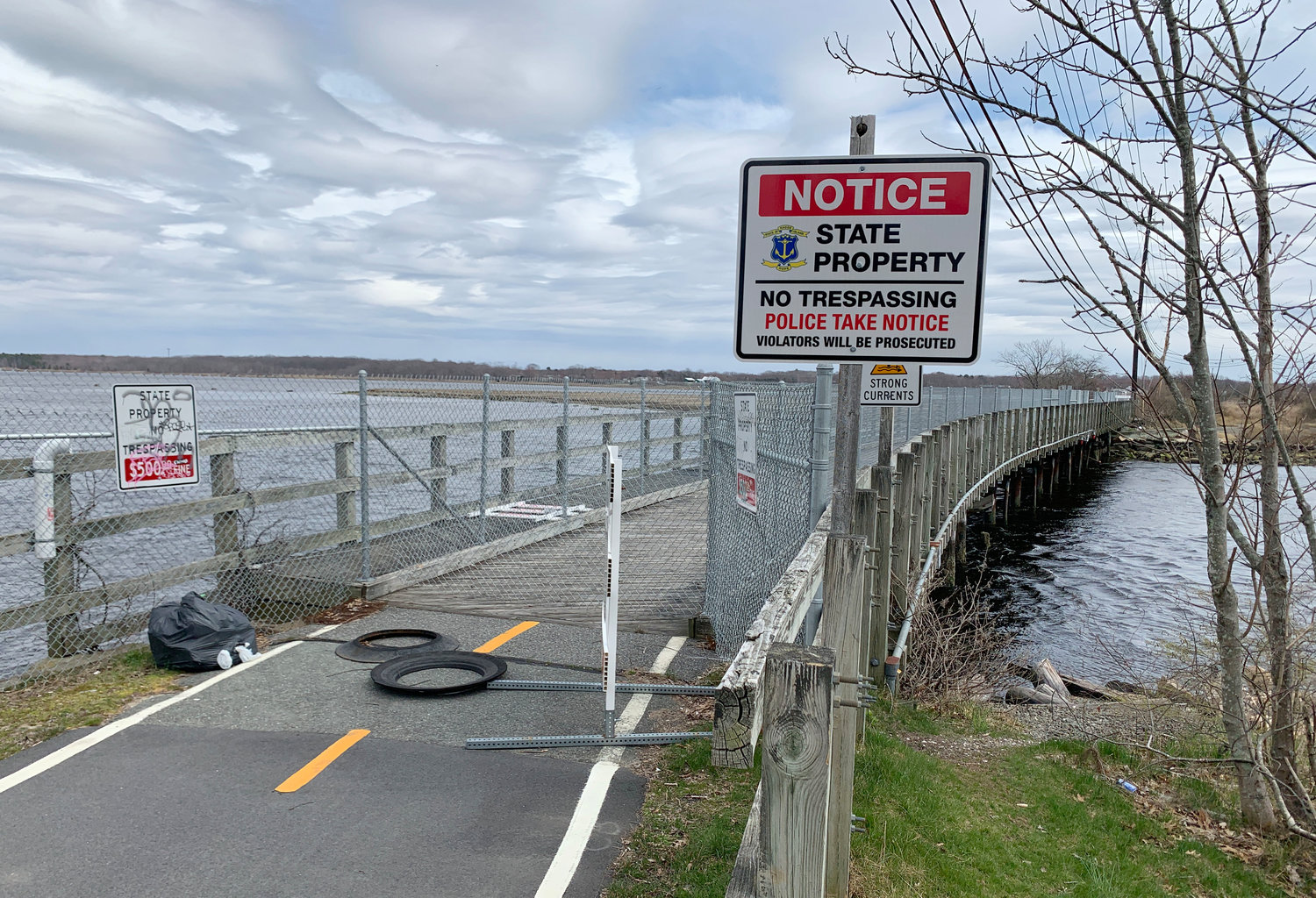 The East Bay Bike Path bridges have been closed since 2019, and a state official recently said that they don't want to "waste $25 million" rebuilding them.
Photo by Richard W. Dionne Jr. 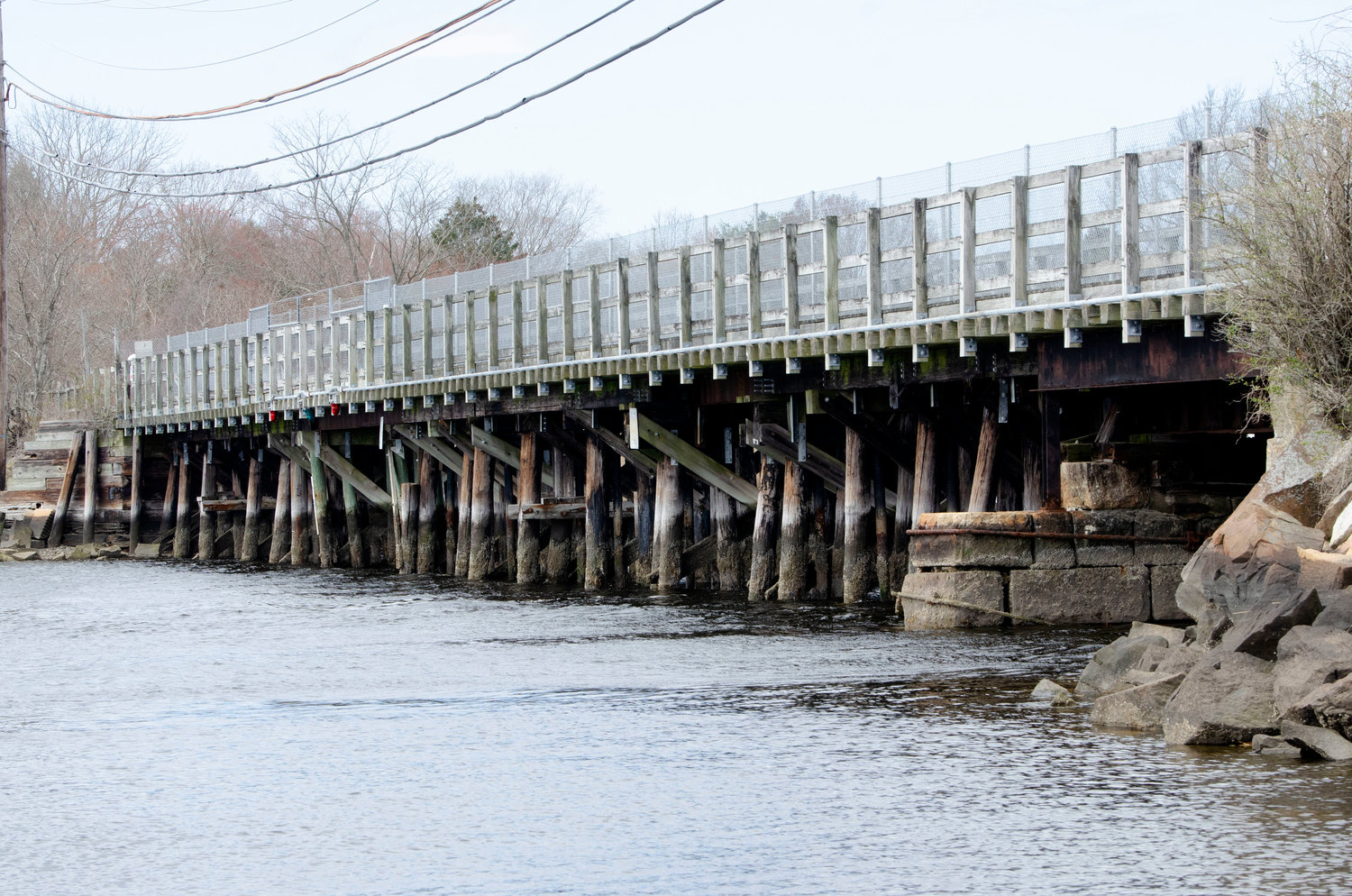 The East Bay Bike Path bridges have been closed since 2019, and a state official recently said that they don't want to "waste $25 million" rebuilding them.
Photo by Richard W. Dionne Jr.
Previous Next
Posted Monday, April 5, 2021 3:35 pm

It is a big story, because the safety concerns are real. I fundamentally don’t know if they get it. That’s the frustration. We’ve been saying it’s important. I just don’t get the sense that it’s elevated on their to-do list.”
Rep. Jason Knight
By Josh Bickford

People waiting for the East Bay Bike Path bridges to be replaced will need to wait longer — maybe a lot longer.

During a radio interview on Thursday, April 1, Rhode Island Department of Transportation Director Peter Alviti said that recent estimates to replace the bike path bridges had increased significantly and the department was now considering alternatives.

“…we don’t want to waste $25 million on something we may not want to do,” he said. “We’re looking into all the alternatives, which include rebuilding the bridges, but also include other designs we may be able to employ to reduce the cost of those. It’s going to take some time. We can’t risk people being hurt.

“We are working actively on finding a solution.”

It was during 630 WPRO’s Gene Valicenti’s program’s “Ask The Director” segment when “Steve in Barrington” called in and asked if the bike path bridges spanning the Warren and Barrington rivers were going to be reopened or fixed.

Mr. Alviti said the bridges were a legacy issue and explained the history of the structures. He said they were originally constructed as part of the railroad that was later converted into the East Bay Bike Path. Mr. Alviti said the state DOT typically keeps bridges open until they are ready to be replaced, but inspections revealed that termites had eaten away at the bridge timbers — the timbers, he said, are hollow on the inside. He said the DOT had to close the bridge for safety reasons. Initially, the state closed the sidewalks on the bike path bridges and then, later, closed the bridges to all pedestrian traffic.

That was in 2019, and DOT officials initially said the project would be put out to bid in Spring 2021. The state also dedicated between $10 million and $15 million, but more recently officials discovered the price had increased to $25 million.

Mr. Alviti said a proper solution should have been offered about 15 years ago when the state was replacing the vehicle bridges on Route 114. He said officials could have included a dedicated bike lane on the new vehicle bridges. But that never happened, and now state officials are trying to find an alternative to the $25 million bridge replacement.

“We are doing it, the question is how we are going to do it,” Mr. St. Martin said. “Normally we keep bridges like these open until we have the funds set, the designs complete, and a contractor hired to do the work to replace them. As you know, we had to close them because of their deteriorated condition, to keep people safe. We didn’t want to do it, but we had to do it.

“As the Director said on air, given the rising cost of the project, we’re exploring alternatives and are doing this now. Once we look at the alternatives, we will engage with the local stakeholders to select the best one. Our intent is go through this process quickly, but we want to do it sensibly to pick the best solution.”

Rep. Jason Knight (D-Dist. 67, Barrington, Warren) has been trying to gather information from the state regarding the bike path bridges for months.

Rep. Knight said he was in a meeting months ago when he heard that original estimates for the bridge project may not be accurate. He said he continued to ask state officials when they were expecting to begin construction, but learned that permitting for the project was also very complicated.

The local legislator said he eventually asked DOT officials for monthly updates on the bridge, but time passed and he did not receive anything. Rep. Knight sent a letter to the state — he said he was concerned that he was not getting the complete truth from the state agency.

“It is a big story, because the safety concerns are real. I fundamentally don’t know if they get it. That’s the frustration. We’ve been saying it’s important. I just don’t get the sense that it’s elevated on their to-do list,” Rep. Knight said.

The safety concerns were illustrated in a recent email from a Barrington resident who accompanies his son when he bikes to Hampden Meadows School each morning. The route he follows requires his son to cross over County Road, follow the bridge over the river and then across New Meadow Road.

“This morning I saw two kids on bikes almost get hit by cars trying to cross Rt 103 at Mathewson Road to get to the other side for the bridge,” he wrote. “Then I saw a few drivers not even slow down for kids at the crosswalk on New Meadow Road, where the bike path crossed the road to the other side.

“With the bike path bridges closed, the kids 9-11 years old are having to navigate morning rush-hour without a crossing guard at either location. And it’s terrifying to watch. I try to stay as long as I can when I see other kids coming to help them cross safely, but eventually I need to leave.”

Rep. Knight said he is trying to keep the state’s attention on the project and not let it slide.

“I know they can move when they want to,” he said.

“I don’t know how hard they’re working on it. That’s my frustration.”

Rep. Knight added that while the DOT may be busy with projects in other parts of the state, they have not been active in his district.

“I’m now in my fifth year, and I’ve watched those projects get pushed back,” he said.

Rep. Knight said officials are planning to make some safety upgrades and improvements to the detours at the bike path bridges.