They have played more than a dozen games, but not many with a full roster.

In fact, through the first nine games of the season, the Barrington High School girls basketball team fielded a … 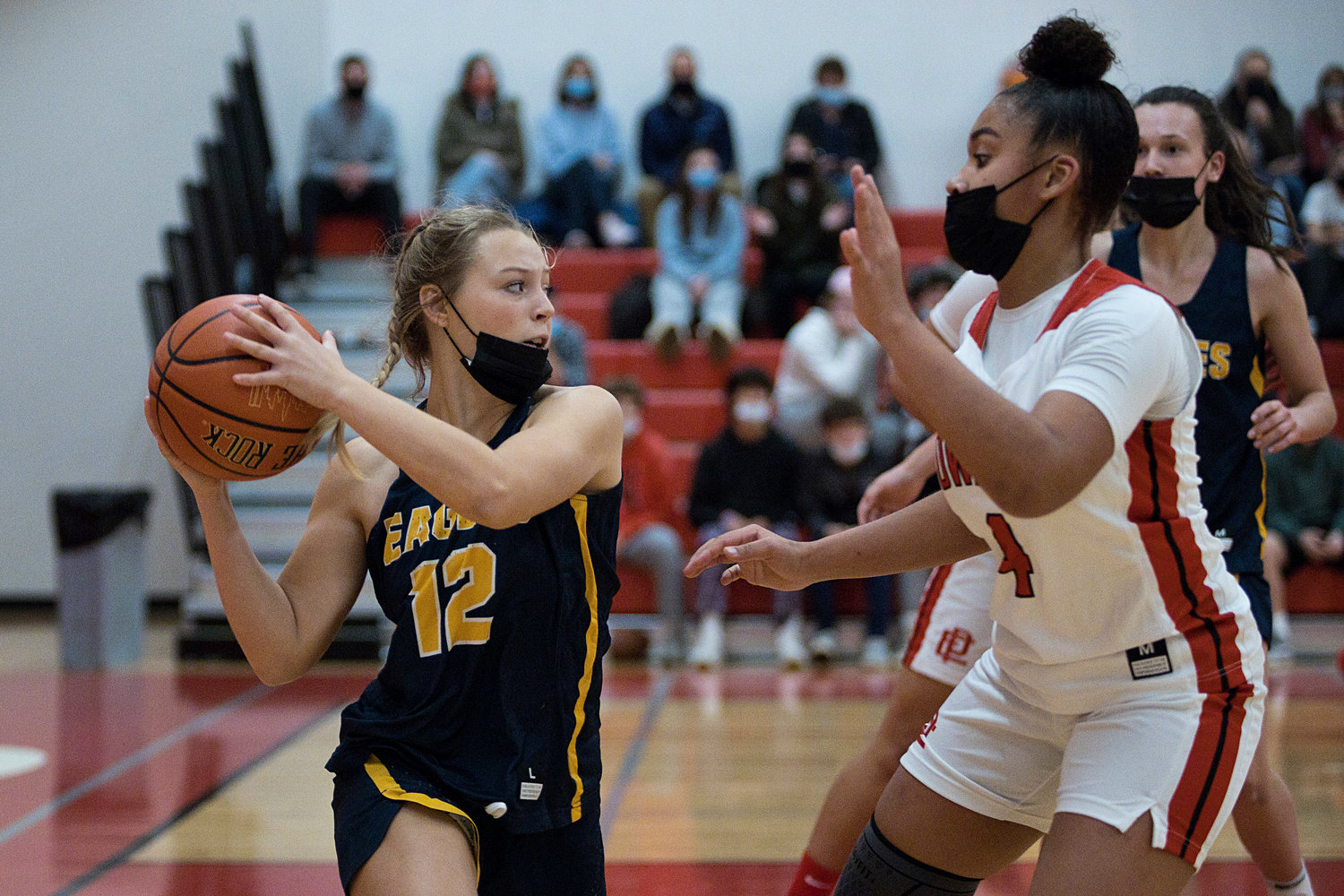 Barrington's Sophie Richardson is pressured by an East Providence defender while making a pass.
Photo by Julie Furtado 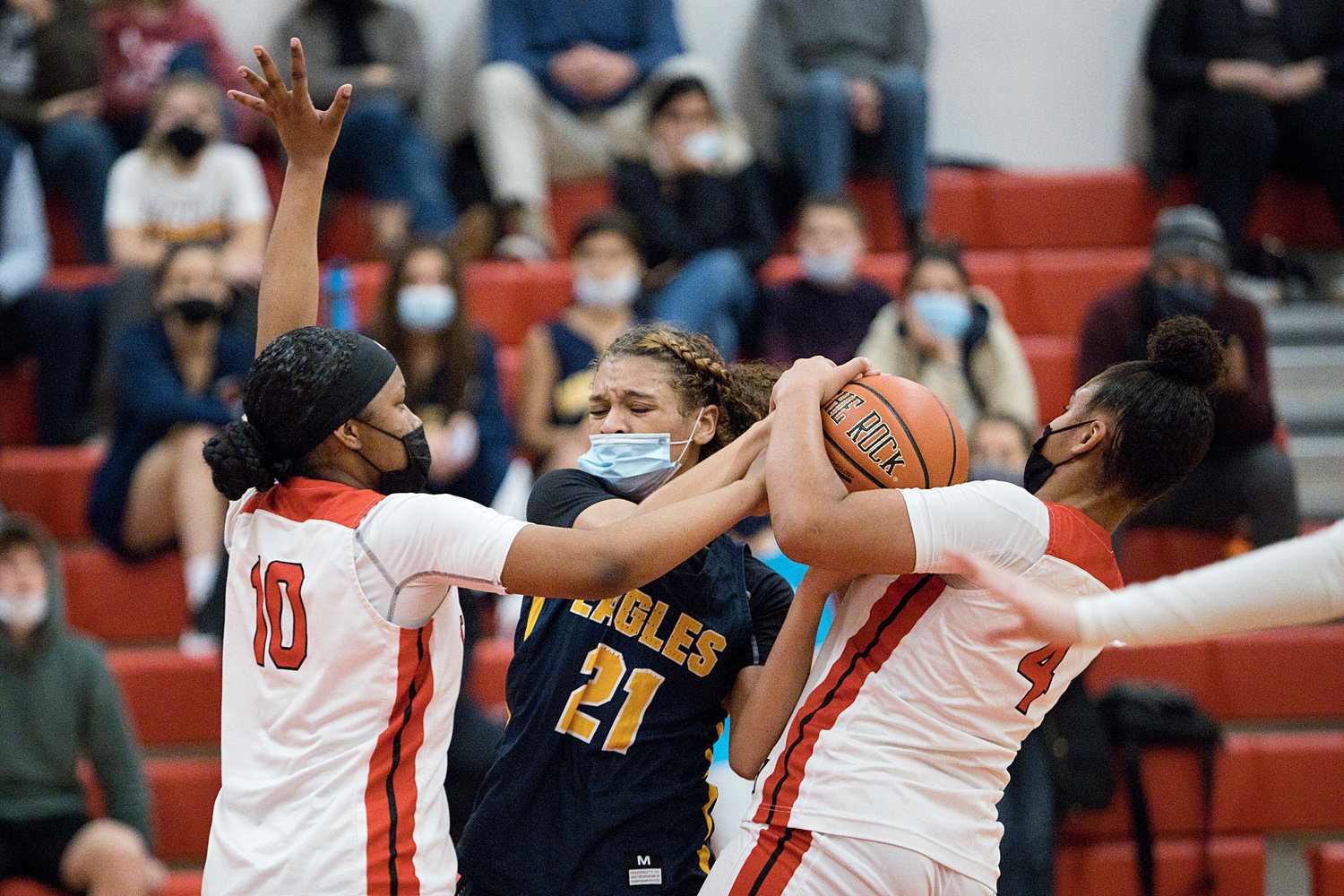 A pair of defenders try to tear the ball away from a Barrington player. 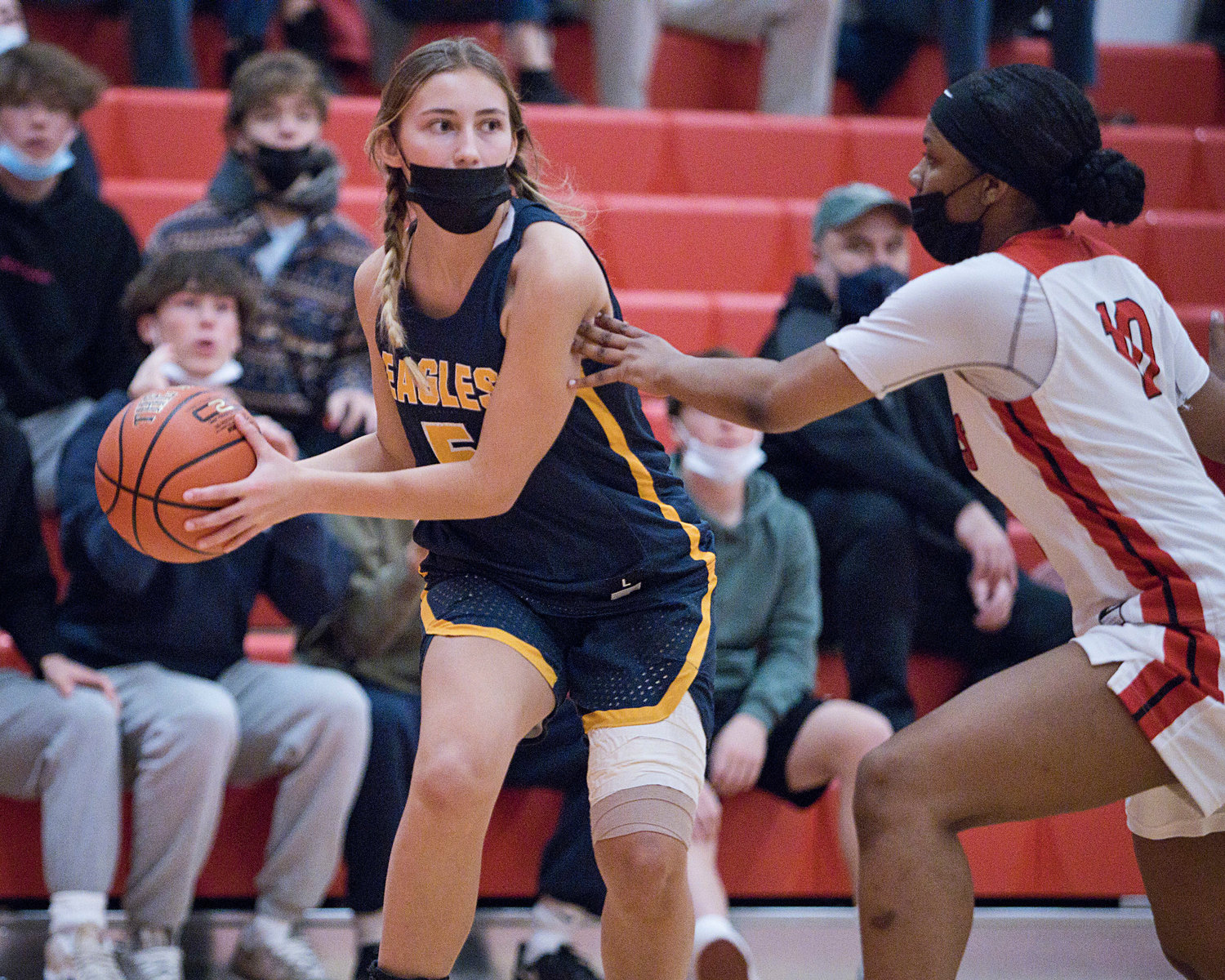 Chloe Rouleau holds the ball away from an East Providence opponent while looking for an opportunity.
Photo by Julie Furtado 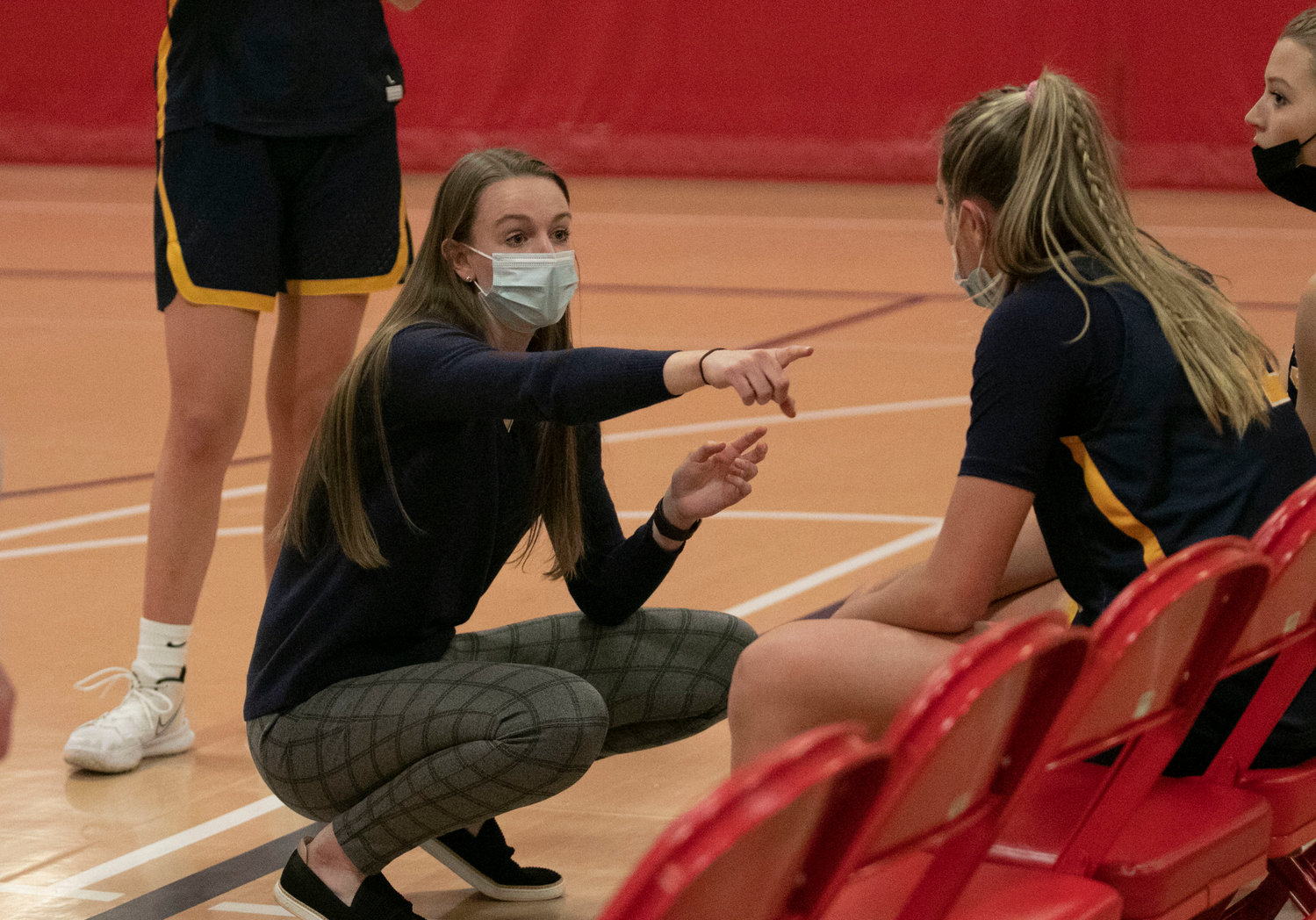 Ainsly Burns, normally the Barrington JV coach, helped coach the varsity in a game against Portsmouth. 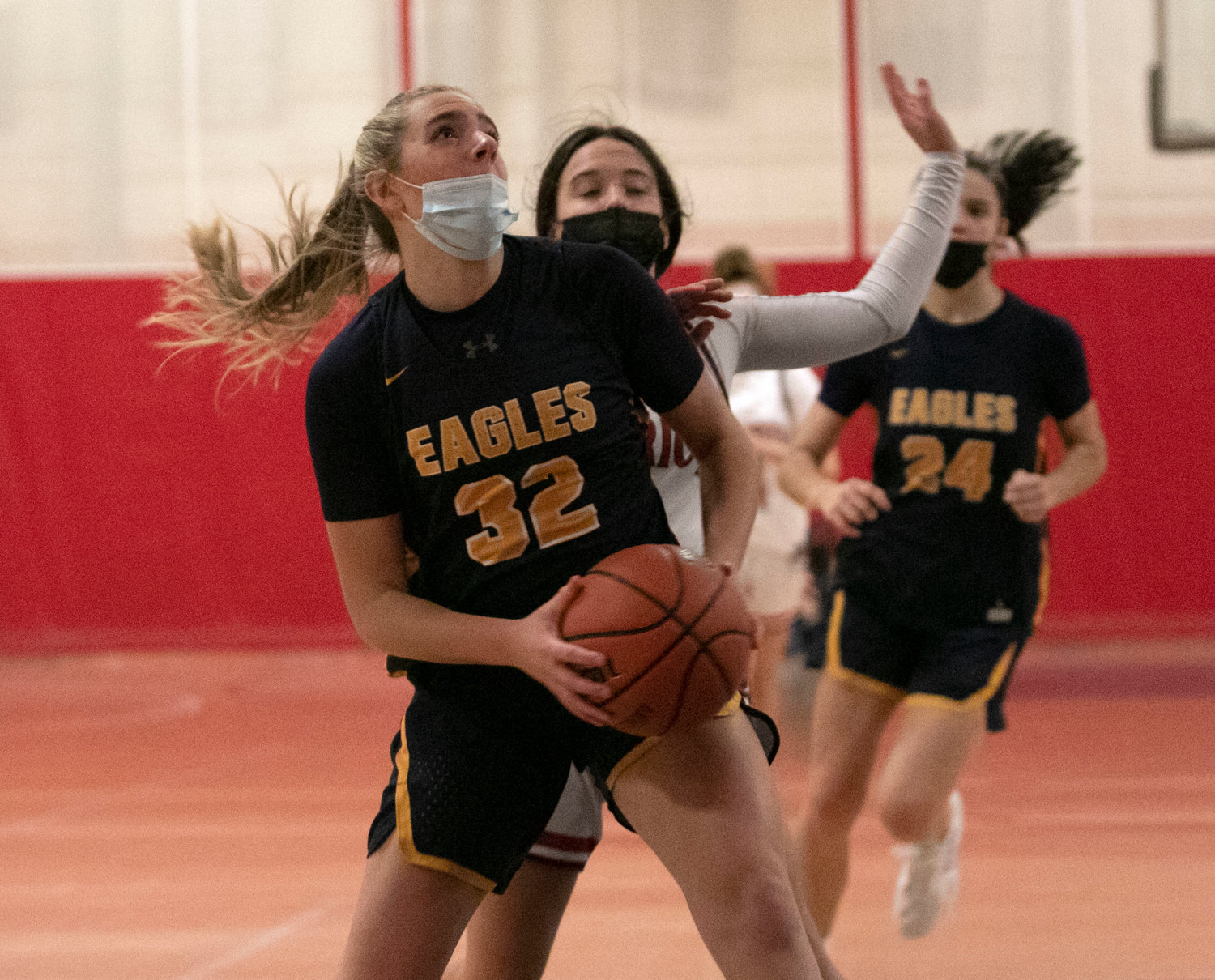 Barrington’s Mady Calhoun looks to shoot from under the hoop. 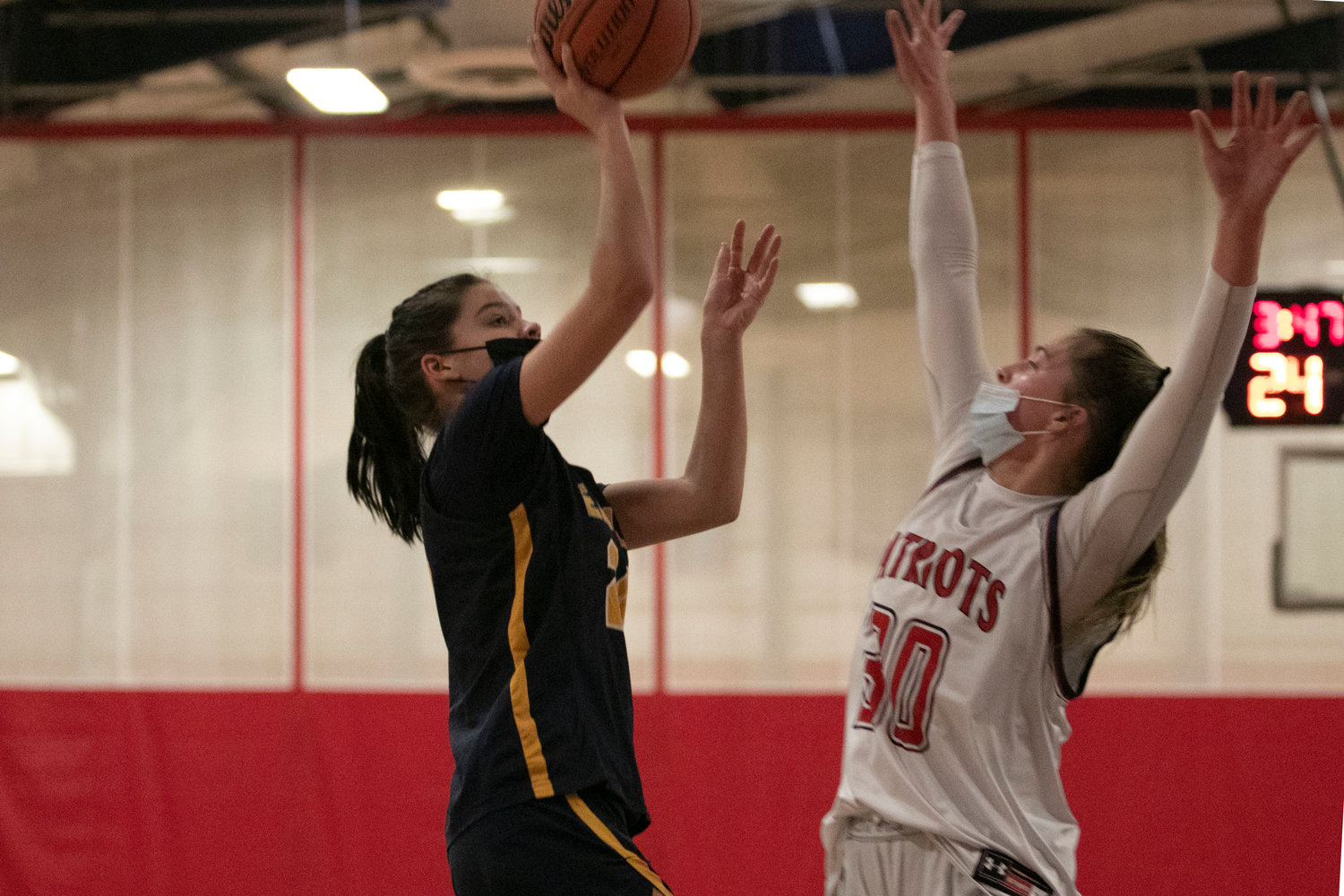 Barrington’s Caroline McConaghy drives in for a jumper during a game against Portsmouth in early January.
Previous Next
Posted Friday, January 28, 2022 11:51 am
By Josh Bickford

They have played more than a dozen games, but not many with a full roster.

In fact, through the first nine games of the season, the Barrington High School girls basketball team fielded a full roster just once: the very first game of the season.

Barrington High School Head Coach Stephen Lenz said players and coaches have been sidelined by Covid-19 throughout the first half of the basketball season, forcing a significant number of lineup changes. (Just moments before an interview with the Barrington Times, Coach Lenz learned that another member of his varsity team had tested positive.)

“We’re almost through the whole team,” Coach Lenz said, adding that all but two team members of the varsity had missed some portion of the season after testing positive.

Coach Lenz said players and coaches have learned to adjust to the challenges. Younger players, some who were not expecting much varsity playing time this year, have been thrust into starting roles at times — logging more varsity minutes and facing more varsity pressure.

Coach Lenz said the players have stepped up to meet the challenges time after time. He mentioned Isys Dunphy, Riley Graveline, Olivia Morrissette and Chloe Rouleau. “They’ve had a ton of playing time,” he said, adding that they have done a great job helping the team.

Despite the roster challenges, Barrington has opened the season with an 11-2 record. The team’s two losses came against top-ranked North Kingstown 63-31 on Jan. 11 and at South Kingstown, 56-49 on Thursday, Jan. 27.

Coach Lenz said his Eagles were missing a handful of starters against the Skippers but the reserves played hard throughout the game.

The shifting lineups have allowed the BHS coaches to build a broader understanding of what the team is capable of — its strengths and weaknesses, and how it responds to challenges.

“I’m very proud of the team,” Coach Lenz said. “We have faced a lot of adversity.”

Against St. Raphael’s Academy, Coach Lenz and the Eagles found themselves trailing by 10 points mid-way through the third quarter, and with a very short bench. Barrington traveled to the game with just 13 total players for the JV and varsity games. Coach Lenz said only six players took the court in the varsity game, challenging players’ stamina and resolve.

Ponaganset rolled into Barrington on Jan. 5 boasting an undefeated record and talented offense. The Eagles responded with a relentless defense, and walked away with a 74-60 victory. Caroline McConaghy dropped in 20, Mady Calhoun finished with 19 and Chloe Rouleau scored 17 in the win.

Coach Lenz said the East Greenwich game marked the half-way point in the season. With a near full lineup including Maddie Gill, Calhoun, McConaghy, Dunphy and others, the Eagles offered a glimpse of what they were capable of accomplishing on the court — a lopsided 71-45 victory over the Avengers.

Barrington dropped a 56-49 decision to South Kingstown on Thursday, Jan. 27, and will be back in action on Wednesday, Feb. 2, hosting Scituate.