DiOrio and Murphy each score twice as Barrington wins 36-33

The crowd at Victory Field on Friday night was treated to showcase of high-scoring offenses.

In the end, the Barrington High School football team built a two-score lead in the fourth quarter and …

DiOrio and Murphy each score twice as Barrington wins 36-33 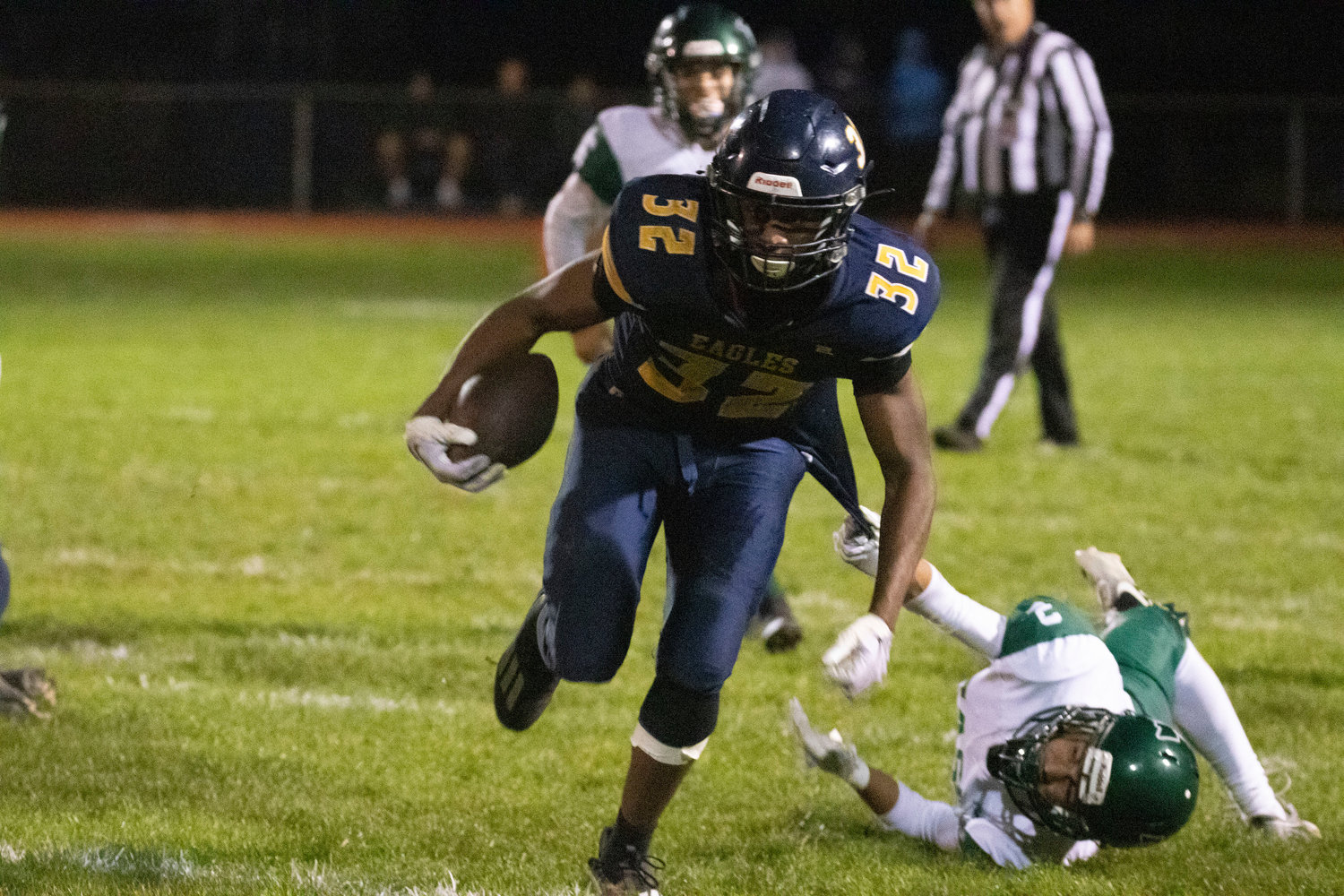 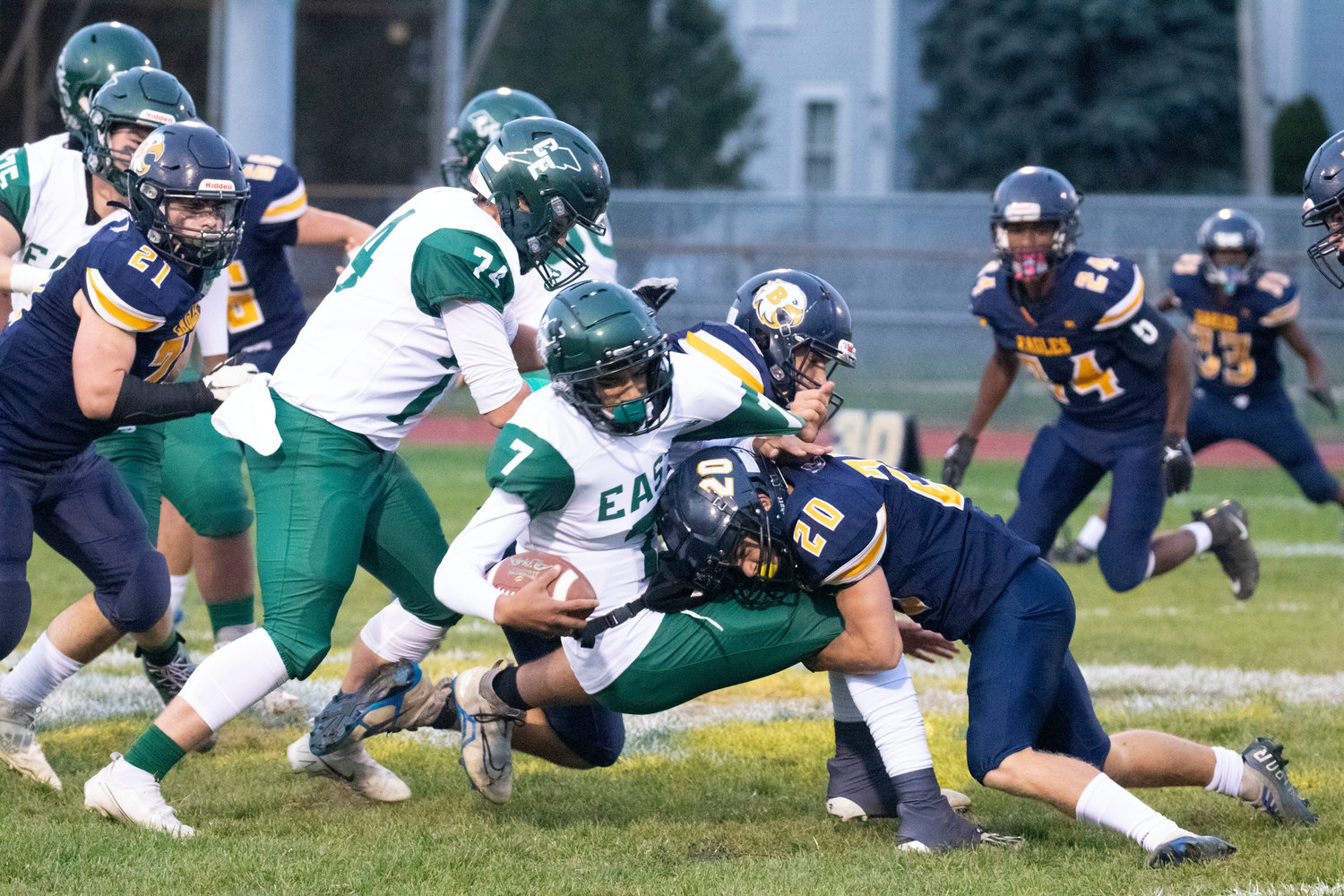 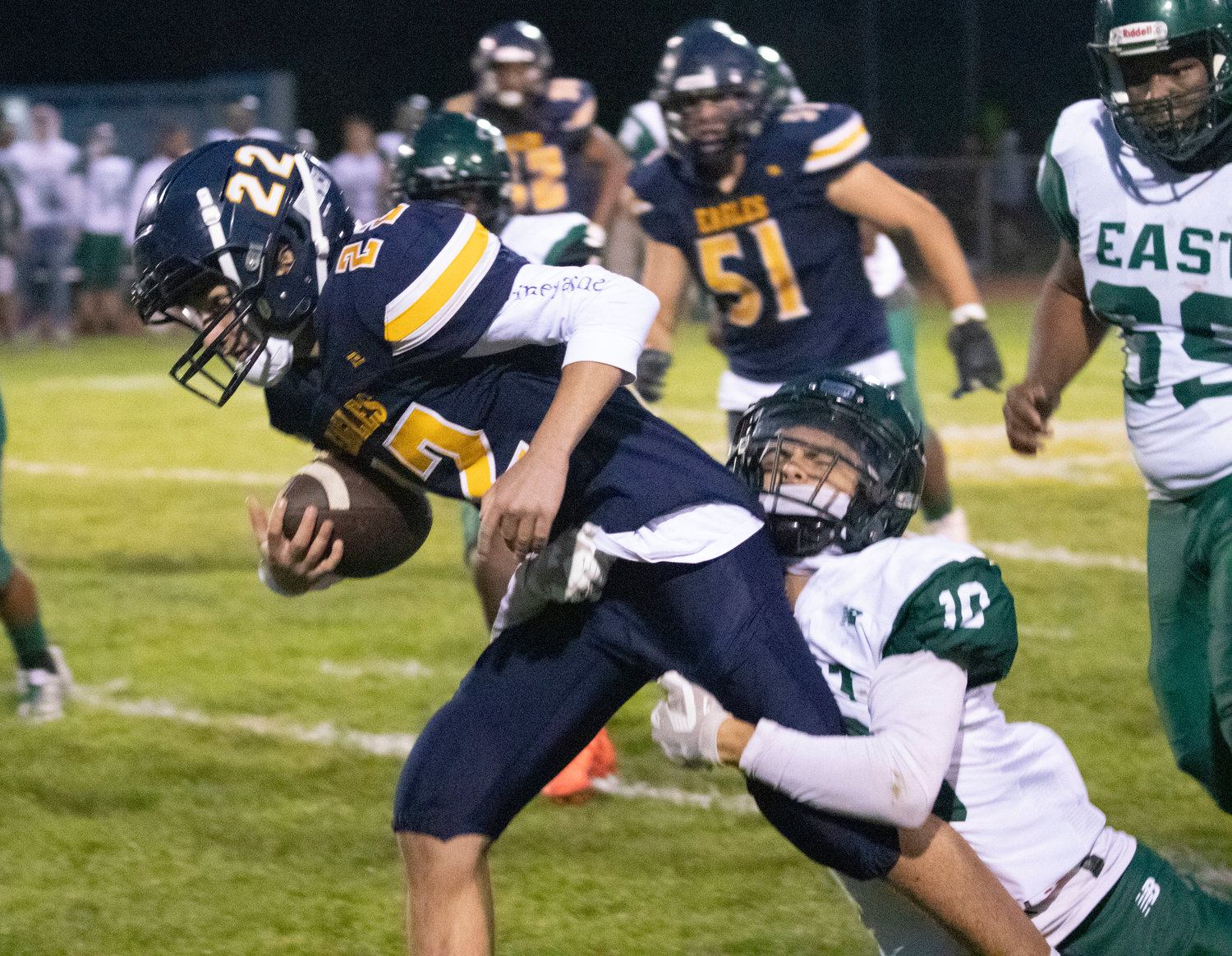 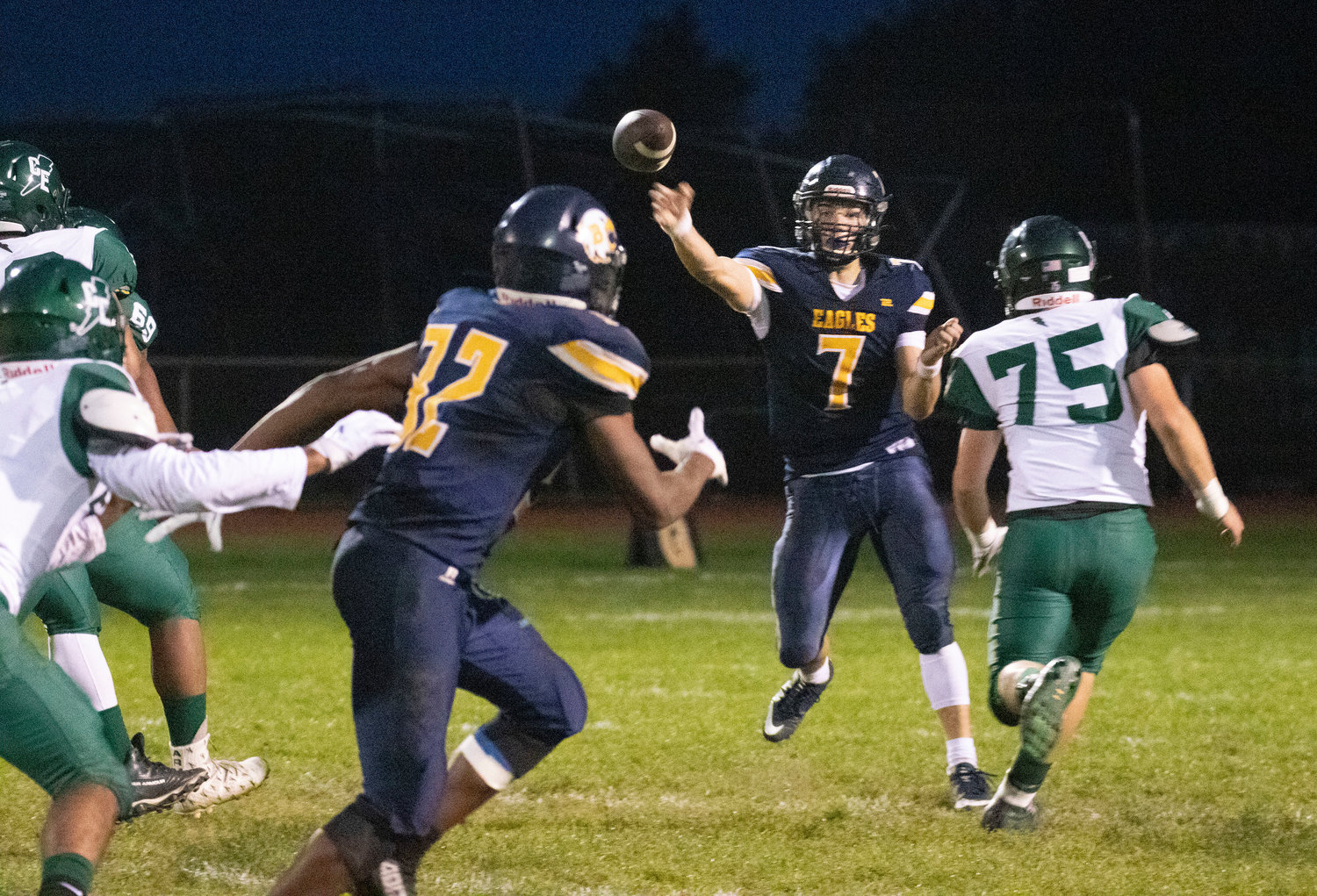 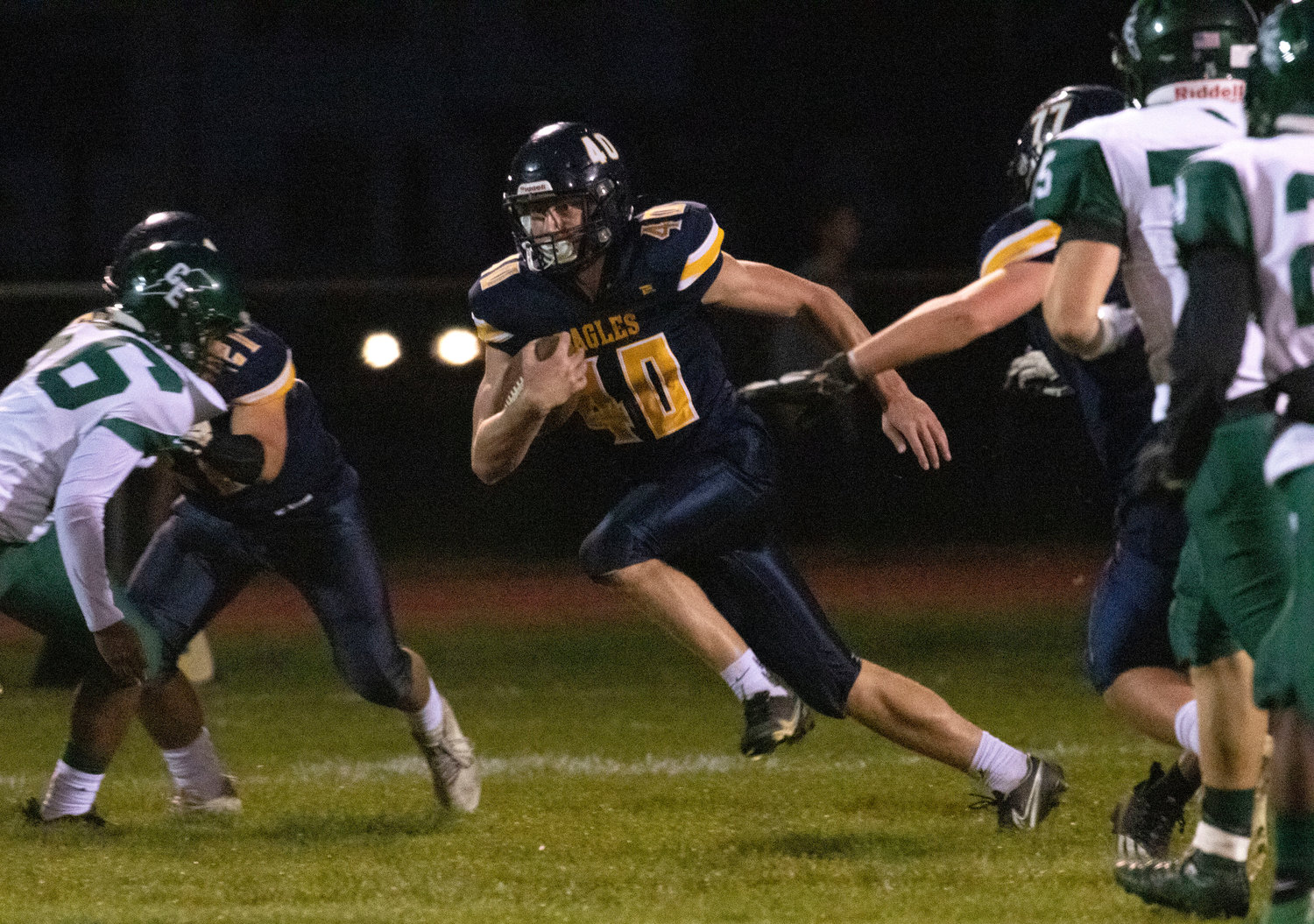 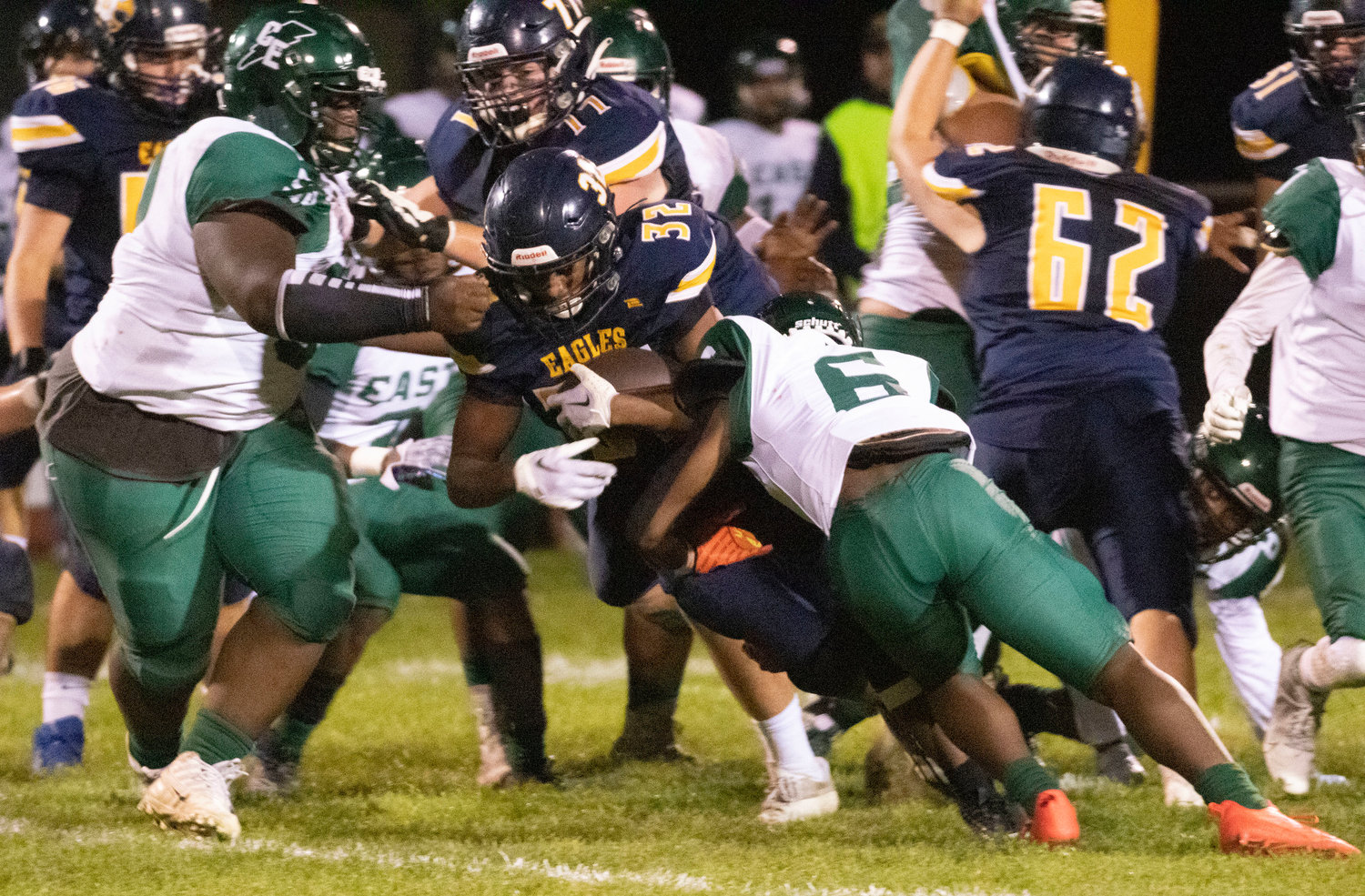 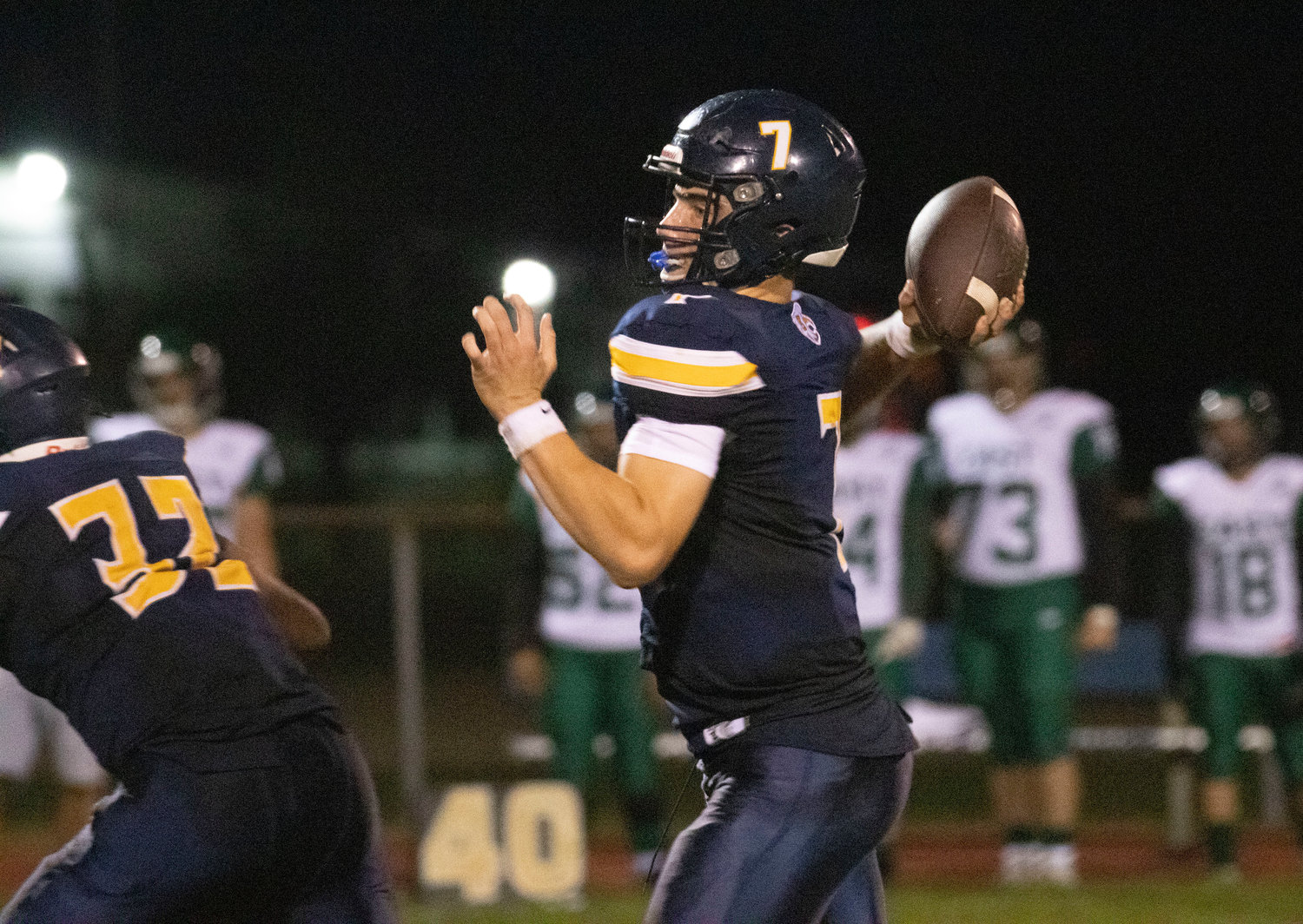 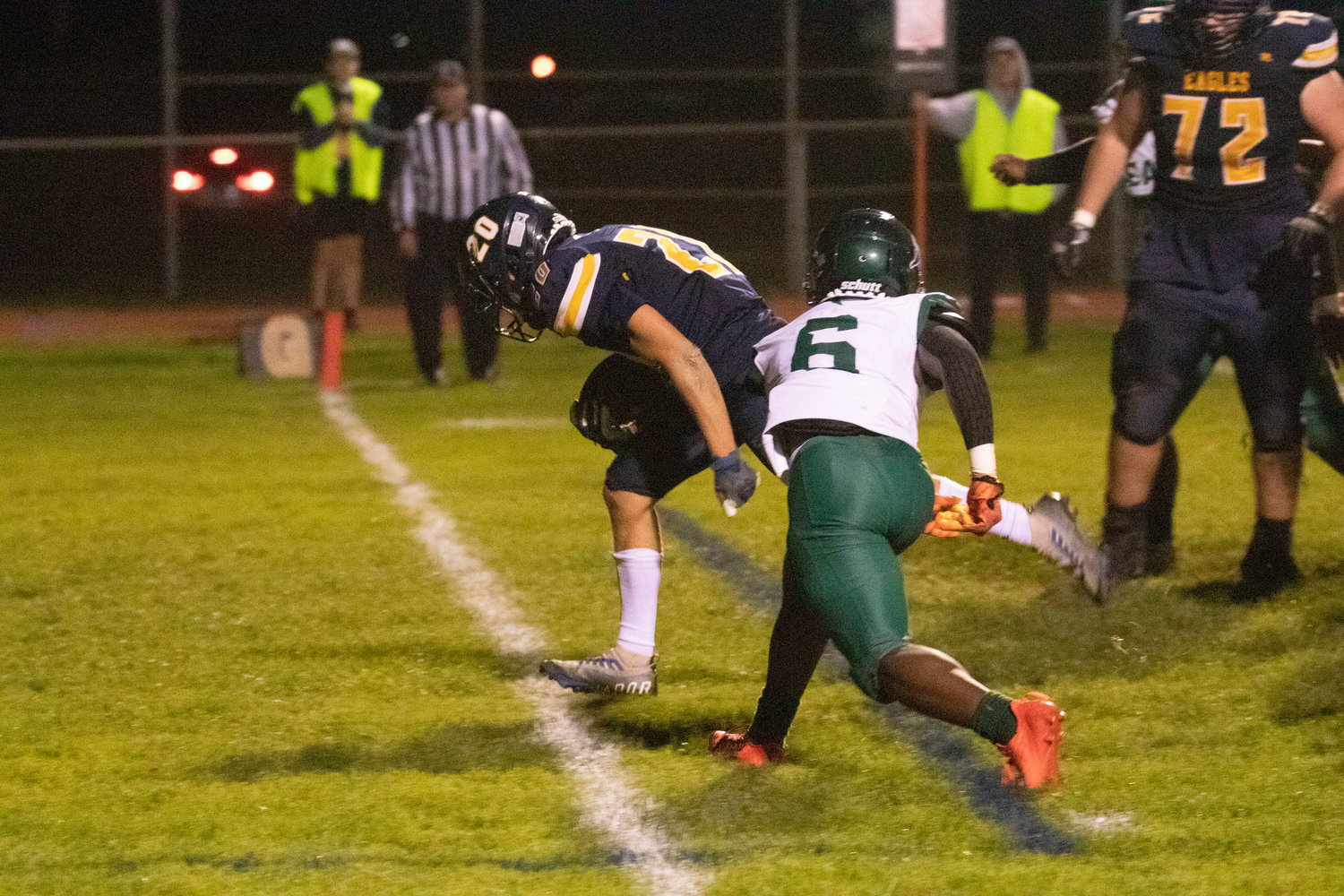 AJ DiOrio sprints into the end zone during the Eagles' game against Cranston East on Friday night.
Photo by Richard W. Dionne Jr. 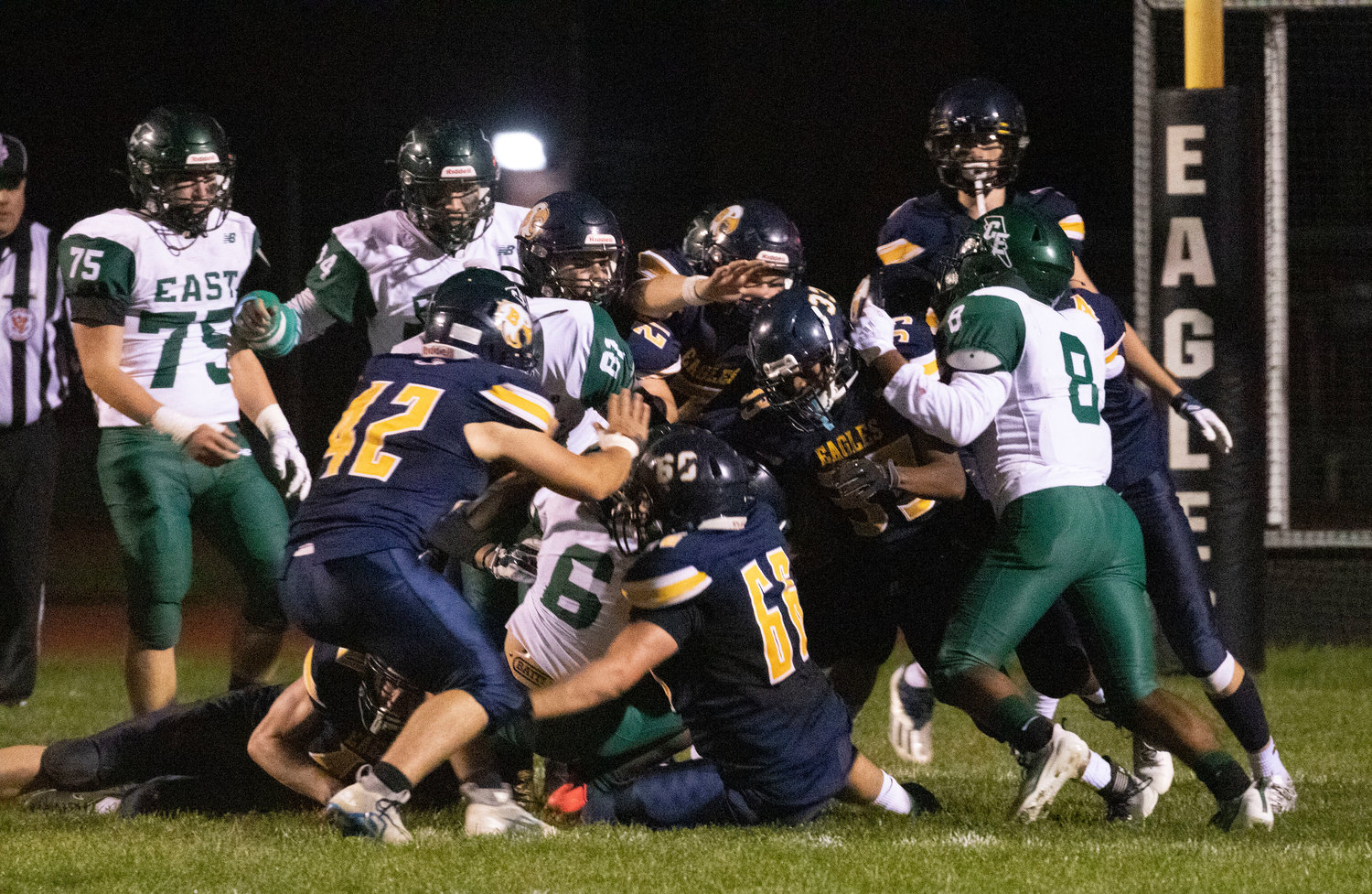 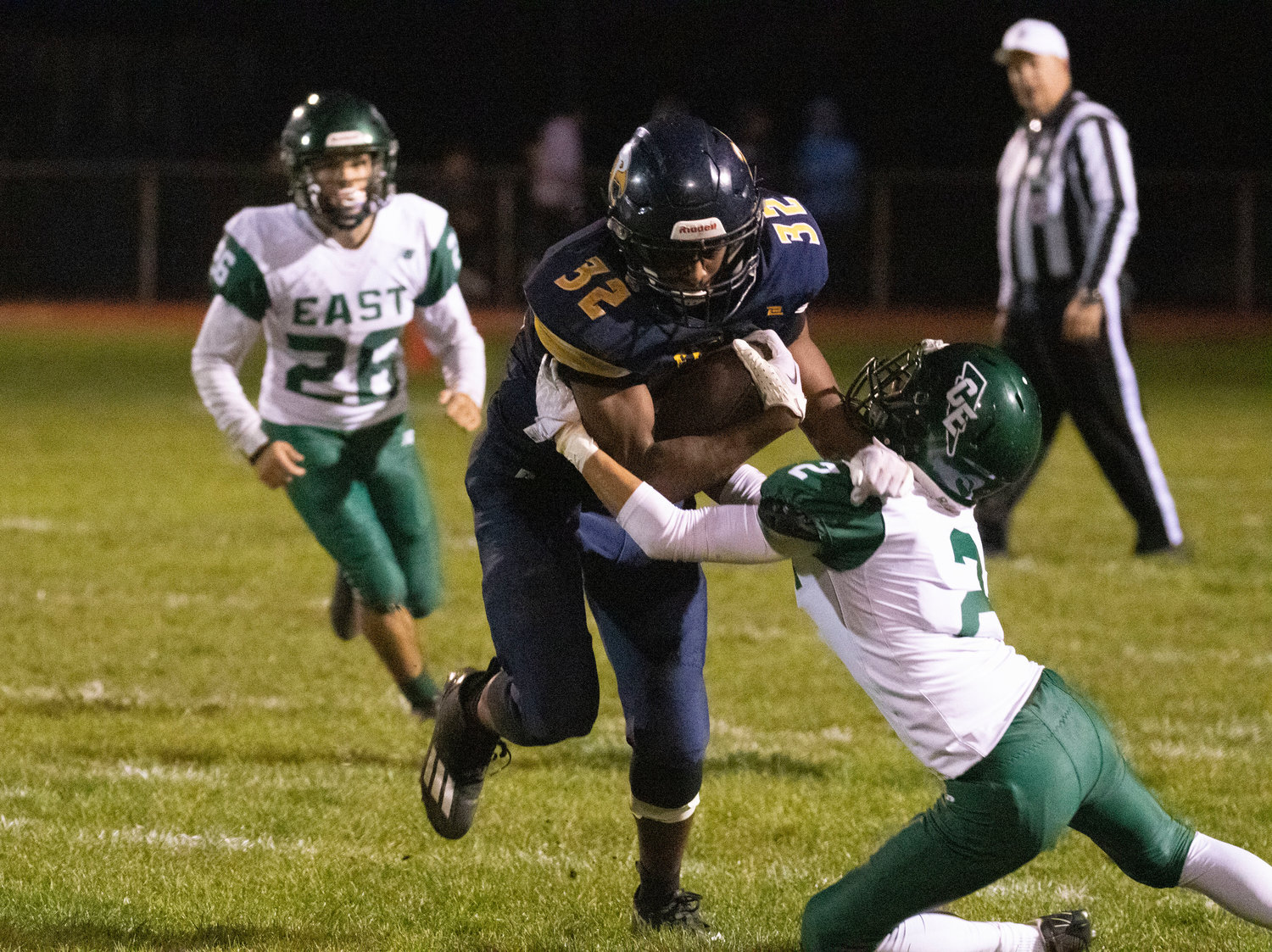 The crowd at Victory Field on Friday night was treated to showcase of high-scoring offenses.

In the end, the Barrington High School football team built a two-score lead in the fourth quarter and its defense made some key stops, as the Eagles defeated Cranston East 36-33 in the Division II showdown.

Neither team scored in the first quarter, but the offenses kicked into gear in the second.

Barrington scored first, but Cranston East battled back with the next two touchdowns. The Eagles grabbed a 14-13 edge with less than a minute to play in the second quarter, but the Bolts struck on a deep pass play and carried a 19-14 lead into the halftime break.

The back-and-forth scoring continued in the third quarter — Barrington went up 22-19, but Cranston regained the lead 27-22. The Eagles charged back and grabbed the edge 30-27, and at the start of the fourth quarter Barrington went up 36-27.

The Bolts refused to quit and cut the lead to 36-33 with nine minutes remaining.

But late in the fourth quarter, Barrington’s defense made a key stand. On first down, BHS linebacker AJ DiOrio darted through a gap in the East line and sacked the Bolts quarterback. Barrington’s Mitchell Ivatts intercepted the next Cranston pass and appeared to lock up the win for the Eagles, but a defensive holding penalty gave the Bolts the ball back. On the next play, the Eagles’ Noah Kranowitz tackled the Bolts quarterback as he tried to scramble, and on fourth down a Cranston East pass sailed high over the receiver’s head. Barrington ran out the clock after the turnover on downs.

“We watched a lot of film coming into this and we saw they passed a lot,” DiOrio said. “We didn’t think it (the East passing attack) was as strong as it was tonight. They definitely beat us in the short passes and then they’d throw a long pass. But I think we cleaned up our mistakes and ultimately it worked out.”

Barrington Coach Sandy Gorham was pleased with his team’s effort.

“It was a game we very easily could have lost, and we didn’t. It was a good win,” said Gorham. “I can’t remember being in a game where so many points were scored. I can’t remember when both teams have scored in the 30s. In all the years I’ve been coaching.

“They played very very well. They certainly looked far better in person than they did on film. They have good athletes, tough kids.”

Cranston East opened the game with a time-consuming drive. The Bolts opened with a few short passing plays and then leaned on the running game to drive deep into Barrington territory. But a holding penalty pushed East back and the Eagles defense responded — Charly Potter knocked down a pass and his brother Chucky Potter tackled a Bolts wide receiver short of the sticks on third down. A Cranston East pass missed its target on fourth down and Barrington took over at its own 13 yard line.

The Eagles used a nine-play drive to take a 7-0 lead. Fullback Payton Murphy broke off a long run to get the Eagles into scoring position and he also plowed the ball into the end zone to cap the push.

The Bolts responded quickly with a fast-strike scoring drive, and took the lead on a punt return for a touchdown mid-way the second quarter. Barrington bounced back with a touchdown on its next possession. The Eagles chewed up 4:30 seconds with the drive, which featured a couple big plays by DiOrio. The first was a nice catch on a pass by quarterback Alex McClelland. DiOrio also capped the drive with a scoring run inside the five yard line.

Barrington’s lead was short-lived. With only 34 seconds to go in the half, Cranston East scored on a deep pass down the sideline. The Eagles stopped the extra point, but trailed 19-14 at the half.

McClelland helped Barrington recapture the lead early in the third quarter. The BHS quarterback kept the ball on an option play, broke a tackle at the line of scrimmage and outran the Bolts defense to the end zone. Barrington hoped to add to its 22-19 lead, as the Eagles appeared to recover an onside kick, but the referees awarded the ball to Cranston East and the Bolts later scored to make it 27-22.

Murphy starred on Barrington’s next drive. He carried the ball five times and scored on a 25-yard run. Murphy also plowed into the end zone for a two-point conversion, giving the Eagles a 30-27 lead.

Cranston East appeared poise to score again, but Barrington’s defense came through with a key stop. Will DiGiacomo tracked down an East received and knocked the ball loose. The Eagles recovered the fumble and made it count — DiOrio capped the ensuing Eagles drive with a hard-nosed run on second and goal from the 10. He took the pitch, cut through an opening in the defense and ran over a defender at the goal line. McClelland found his brother, sophomore tight end Ben McClelland, on a key third-down conversion on the drive, and Murphy ripped off a 35-yard run a few plays later.

The Bolts refused to quit, however, and cut the lead to 36-33 with nine minutes to play.

The Eagles offense put together a long drive, and while it chewed time off the clock, it failed to end with a score. East took over at its own 17 yard line, but Barrington’s defense held and forced a turnover on downs.

The win pushed Barrington’s record to 2-1 in the division. The Eagles will next face South Kingstown.

“We’ve got a tough one against South Kingstown next week,” Gorham said.