Some people are in agreement that the traditional Thanksgiving Day football battle between Barrington High School and Mt. Hope School isn’t what it used to be. They’re probably … 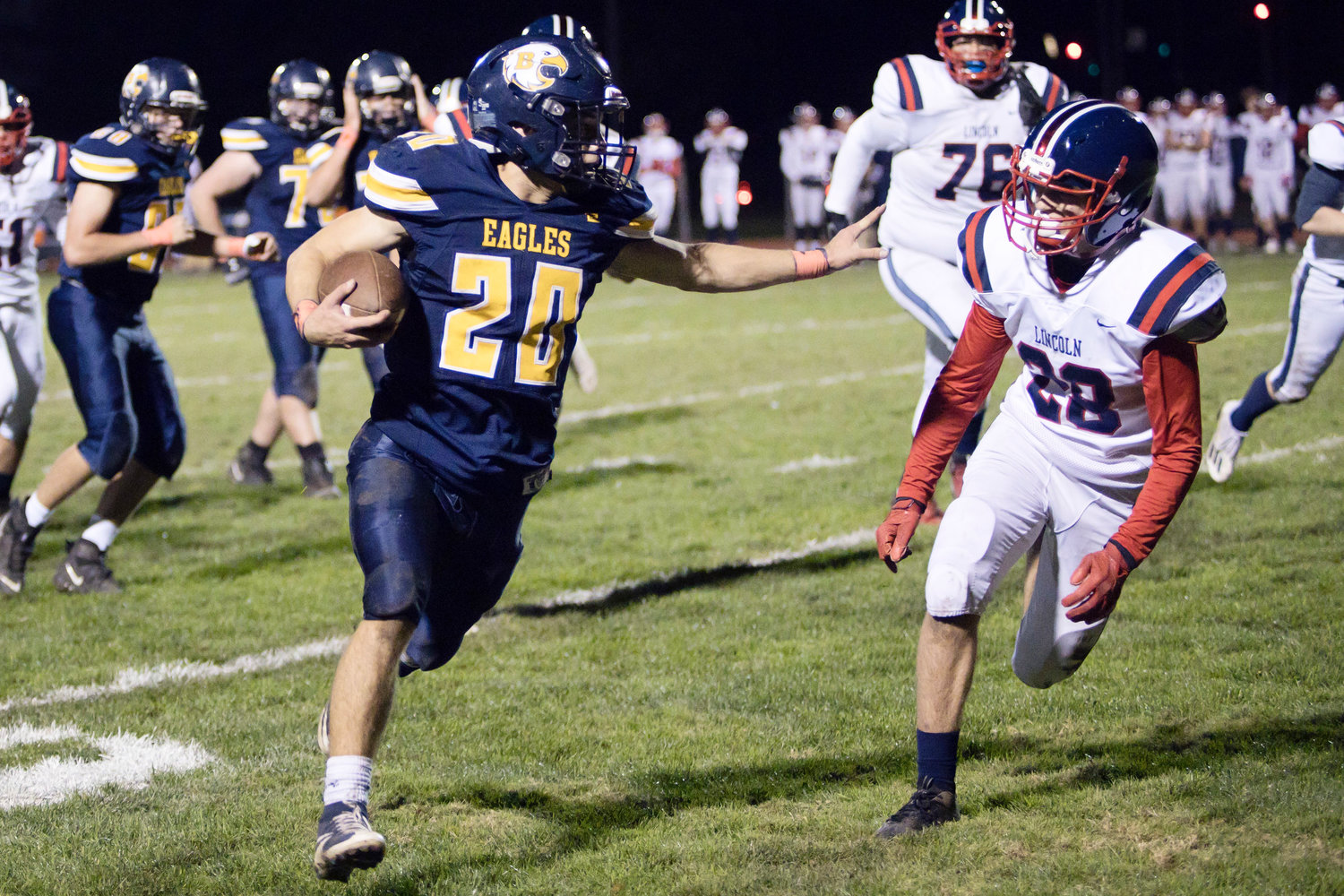 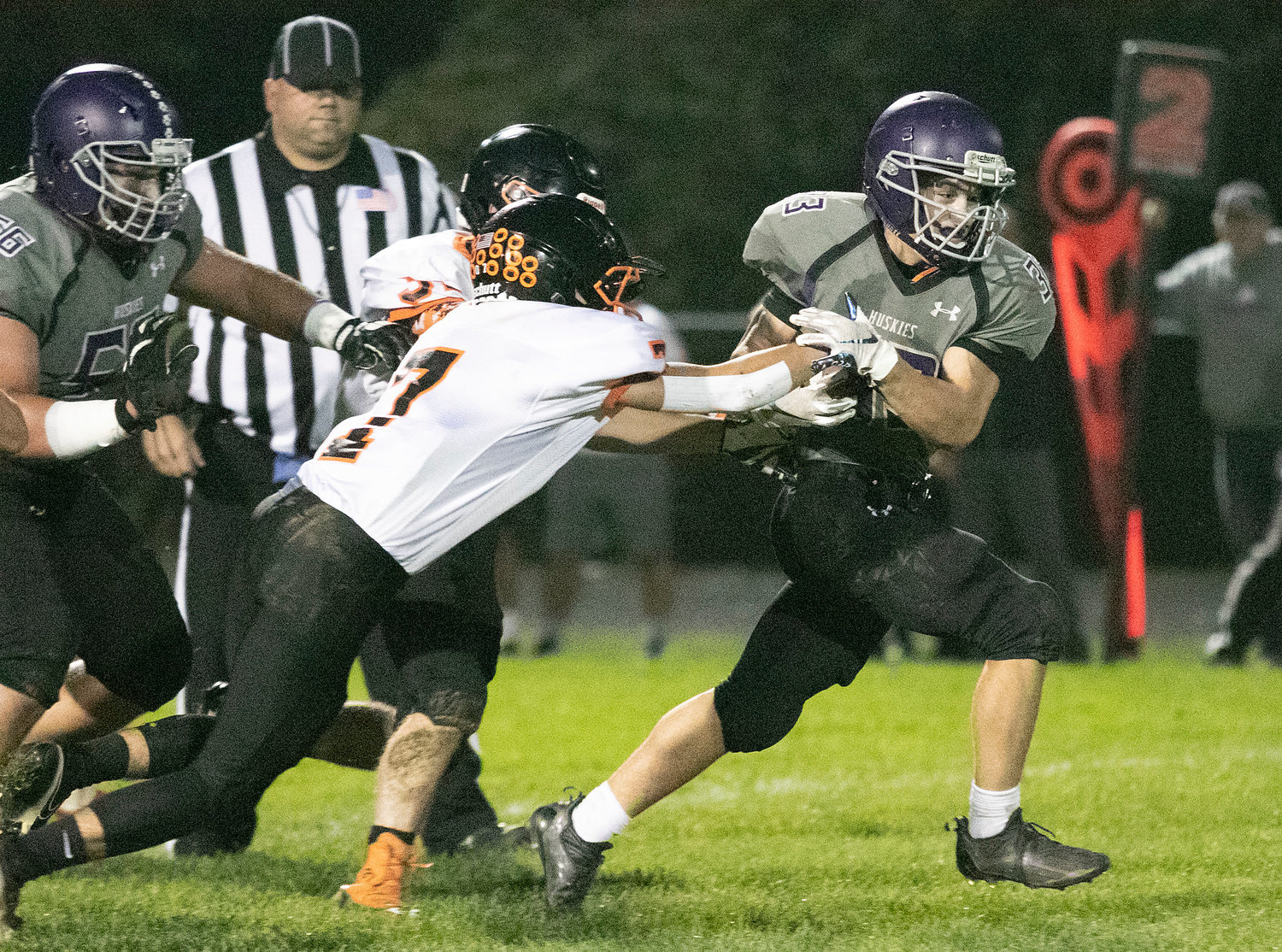 Mt. Hope’s Brock Pacheco breaks away from a would-be tackler during a Huskies’ game this season. 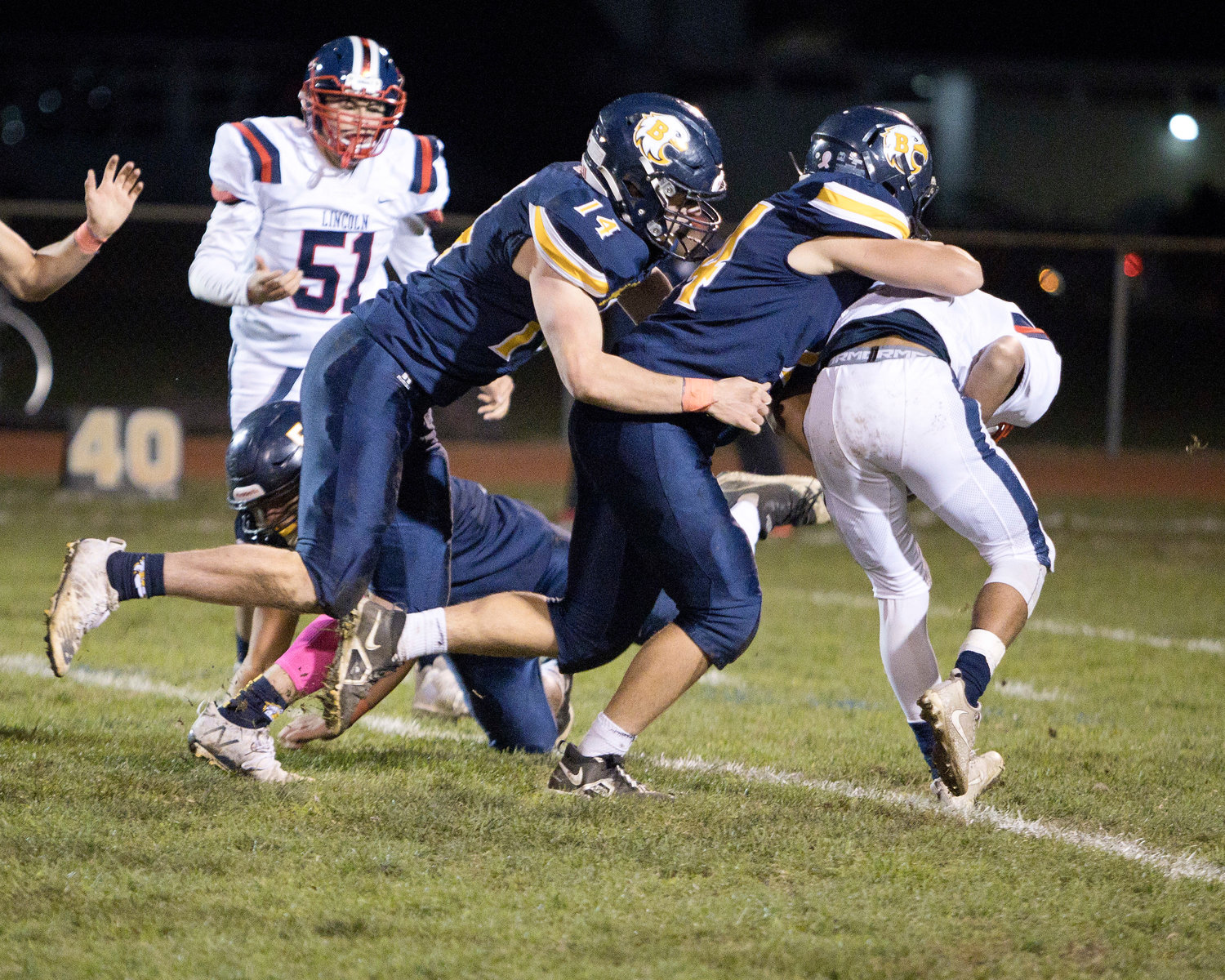 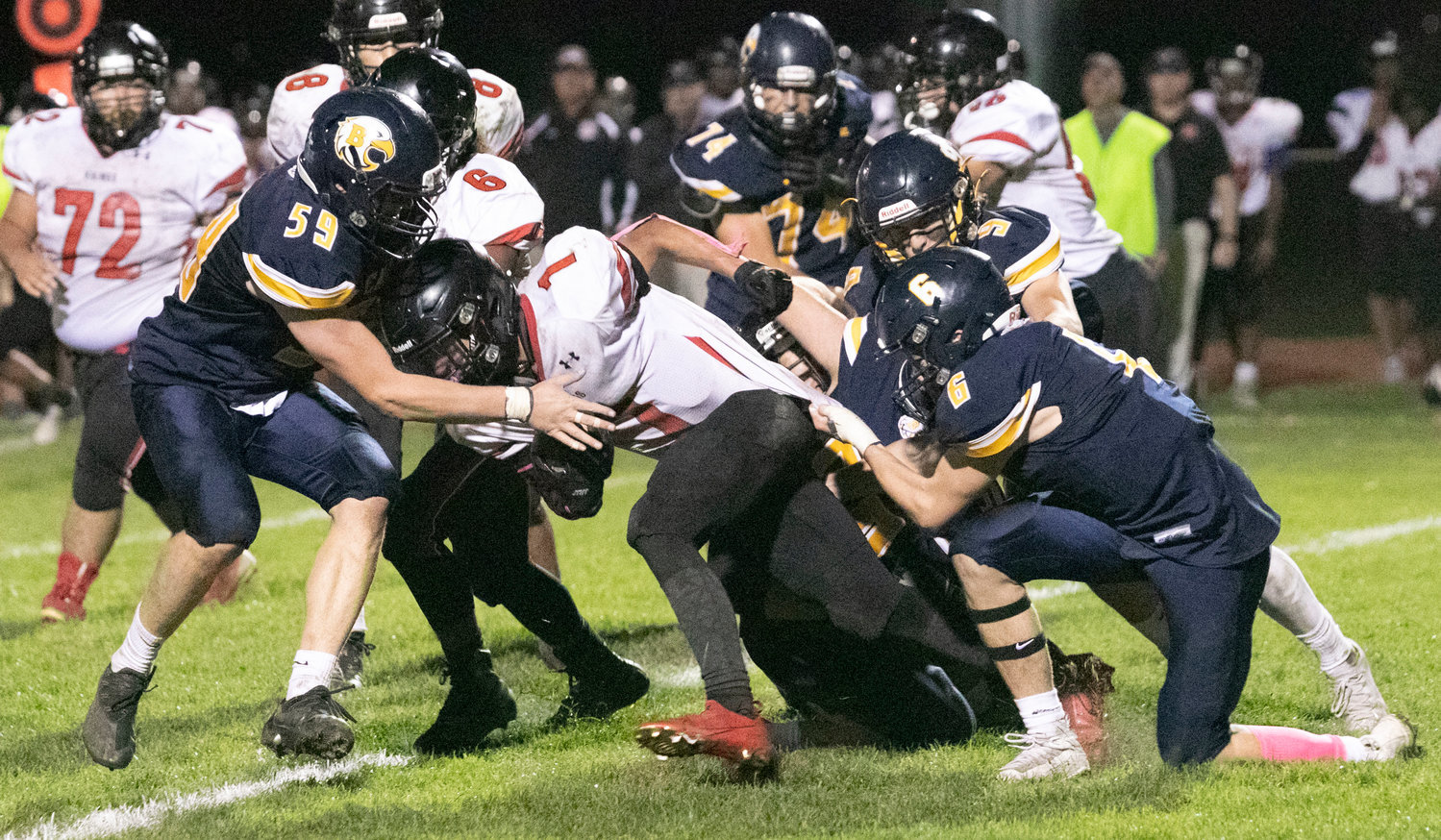 A gang of BHS defenders bring down an opposing running back during an earlier game this season. 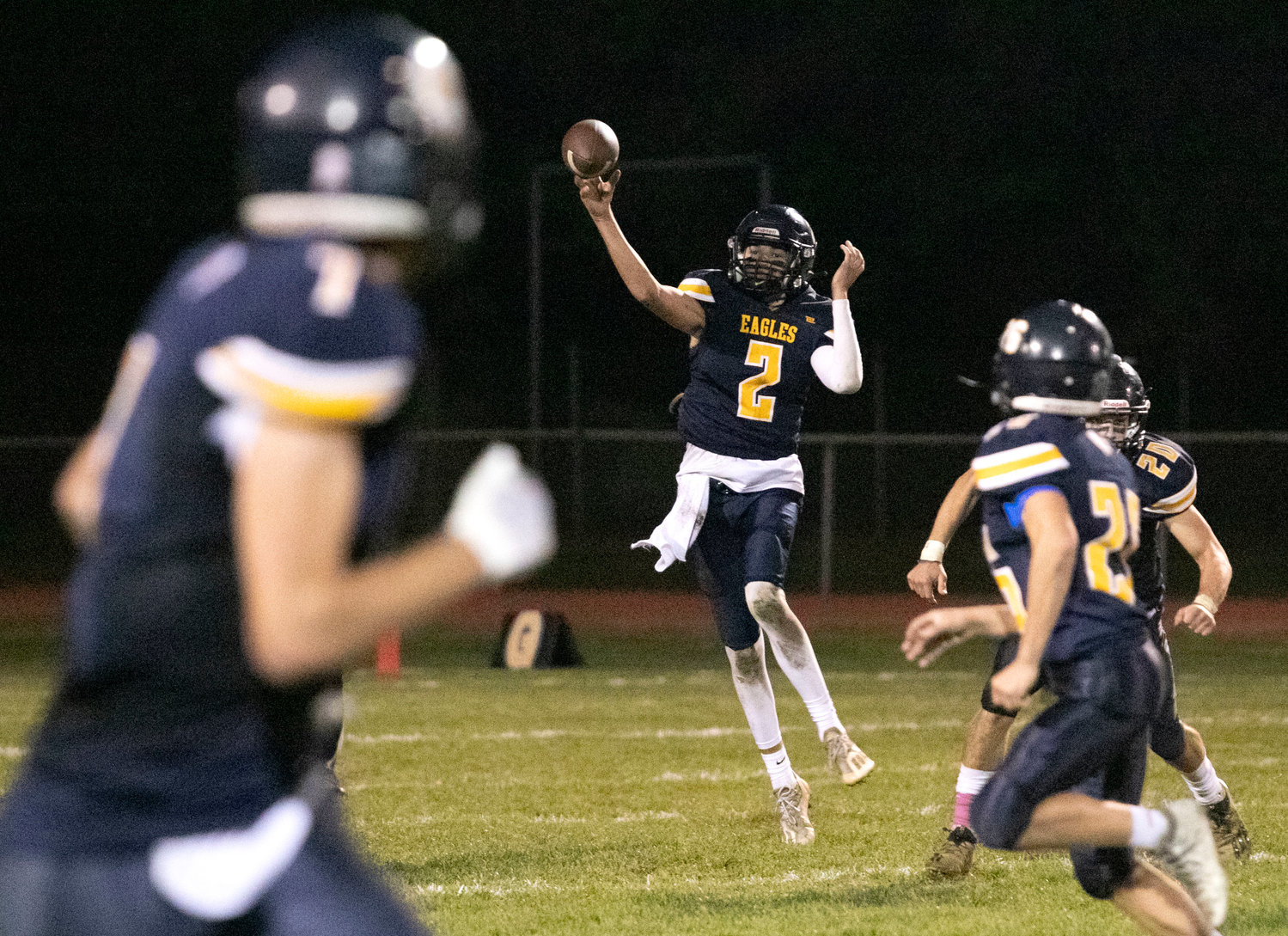 Barrington High School senior quarterback James Anderson lofts a pass to a teammate during the Eagles’ game against Rogers earlier this season. 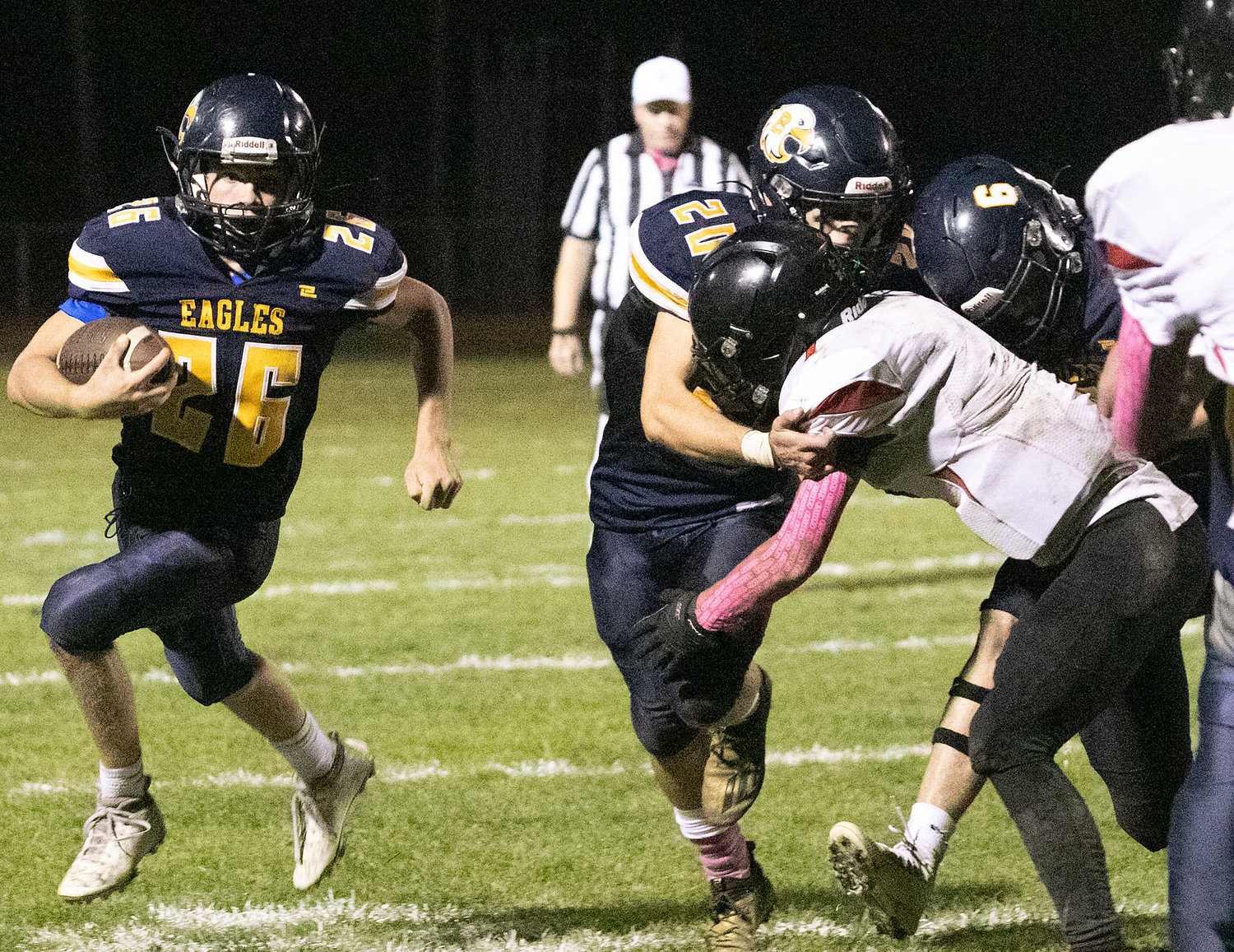 Barrington High School’s AJ DiOrio runs for a big gain during the Eagles’ game against Rogers earlier this season.
Previous Next
Posted Tuesday, November 23, 2021 8:30 am
BY MANUEL C. “MANNY” CORREIRA

Some people are in agreement that the traditional Thanksgiving Day football battle between Barrington High School and Mt. Hope School isn’t what it used to be. They’re probably right.

Back in the day, this confrontation between what used to be Bristol High School and the Eagles, captured the imagination of every football fan here in the East Bay and beyond. It was that type of rivalry.

Right from the beginning, you could sense something different was about to happen. Most notably, the old Bristol and Warren school colors of Green and White and Maroon and White, respectively, became Purple and White. Furthermore, the former Bristol Colts and Warren Redskins, became the Mt. Hope Huskies. So much for the brief history lesson.

This Thanksgiving, Barrington and Mt. Hope will meet for the 28th time officially. The game will be played at 10 a.m. at Barrington’s Victory Field. The Eagles hold a commanding 18-9 advantage in the series.

Last year, the COVID-19 pandemic threw everything out of whack and the traditional battle between these two arch-rivals was held in the spring in nearby Middletown, with Barrington coming out on top, 33-20.

What can fans expect this time around? Eagles’ head coach Sandy Gorham has a simple explanation.

“You can throw the records right out the windows,” he said. “You never know what’s going to happen when these teams hook up.”

Having won the last four meetings against the Huskies, Coach Gorham takes nothing for granted.

“We know T.J. (Del Santo) will have his team ready to play,” he said. “He’s always done a nice job coaching those kids.”

As far as Barrington is concerned, the Eagles finished with a 7-3 record during the regular season, and were very competitive throughout the course of the campaign. Having graduated 24 seniors from last year’s championship team, only three starters returned this year. They included senior quarterback James Anderson, senior fullback Brian Ivatts and junior tackle Dan Lemos.

“They all performed very well this season, and I know they’ll be ready to face Mt. Hope Thanksgiving Day,” said Coach Gorham.

Also ready for the big battle are sophomore running back A.J. DiOrio, another in a long line of talented players from the DiOrio family, and senior running back Braeden Flaherty.

“Both have done a great job for us this season,” the coach noted. He also praised the play of his offensive line.

“There’s no doubt that the key to our team is the offensive and defensive lines,” Coach Gorham explained.

Running an option offense, the Eagles took their cue from Brian Ivatts, who was the top rusher on the team while scoring 17 touchdowns.

Coach Gorham said, “We’re not big, but these kids are quick. Our quarterback has a great arm and he understands the option game.”

“The Thanksgiving game is so emotional for both teams, since it’s a rivalry game,” he said.

“Records mean nothing,” he said. “It’s always a very hard-fought, competitive game. There’s a lot of parity this season. It’ll be a hard-fought game.”

Junior running back/linebacker Brock Pacheco will be one of the main threats for the Huskies.

“He’s been unbelievable,” said Coach Del Santo, referring to some of his best games this season. “He had 180 yards rushing and an 80-yard kickoff return for a touchdown against West Warwick. He scored 4 touchdowns in that game. On defense, he made 11 tackles. Overall, he’s been our best player throughout the season and he’s only 5-feet-8 and 155 pounds.”

Other Mt. Hope stars to reckon with will be senior quarterback Aidan Ramaglia, who had more than 8 touchdown passes this year while running the ball exceptionally well. His leading receiver was senior wide receiver/defensive back Bruce McGuire, who had 4 receiving touchdowns, including two of more than 60 yards.

One of the Huskies’ leading tacklers is senior tackle/defensive end Atley Jenness. He’s a player the Eagles will have to watch closely.

For the first time in school history, Mt. Hope has a senior female kicker of note. Her name is Avery Robitaille and she’s been as consistent as they come.

“She’s been one of the state’s best kickers,” said coach Del Santo. “She kicked last year as a junior, the first time a female scored points in a varsity game. She’s been awesome.”

Mt. Hope also featured a very aggressive and hard-nosed bunch of kids on defense, which includes senior Niko Da Silva, son of former Bristol High School star athlete Manny Da Silva. Niko is a slot receiver and linebacker who has been described as “tough and fearless.”

The Huskies also boast some pretty imposing players along the line of scrimmage, including senior offensive/defensive tackle Ben Laliberte, a 6-foot-4, 275-pounder who’s been an over-powering figure all season long.

“I know we’ll come ready to play,” said Coach Del Santo. “Our kids will be ready for the task at hand.”