Double-amputee sailor is in the final stretch

After a productive summer, solo sailor to head off on final leg of world circumnavigation

For someone who has spent the past few years sailing solo around the world, you wouldn’t think loneliness would be an issue. But for circumnavigating, double-amputee solo sailor Dustin …

Double-amputee sailor is in the final stretch

After a productive summer, solo sailor to head off on final leg of world circumnavigation 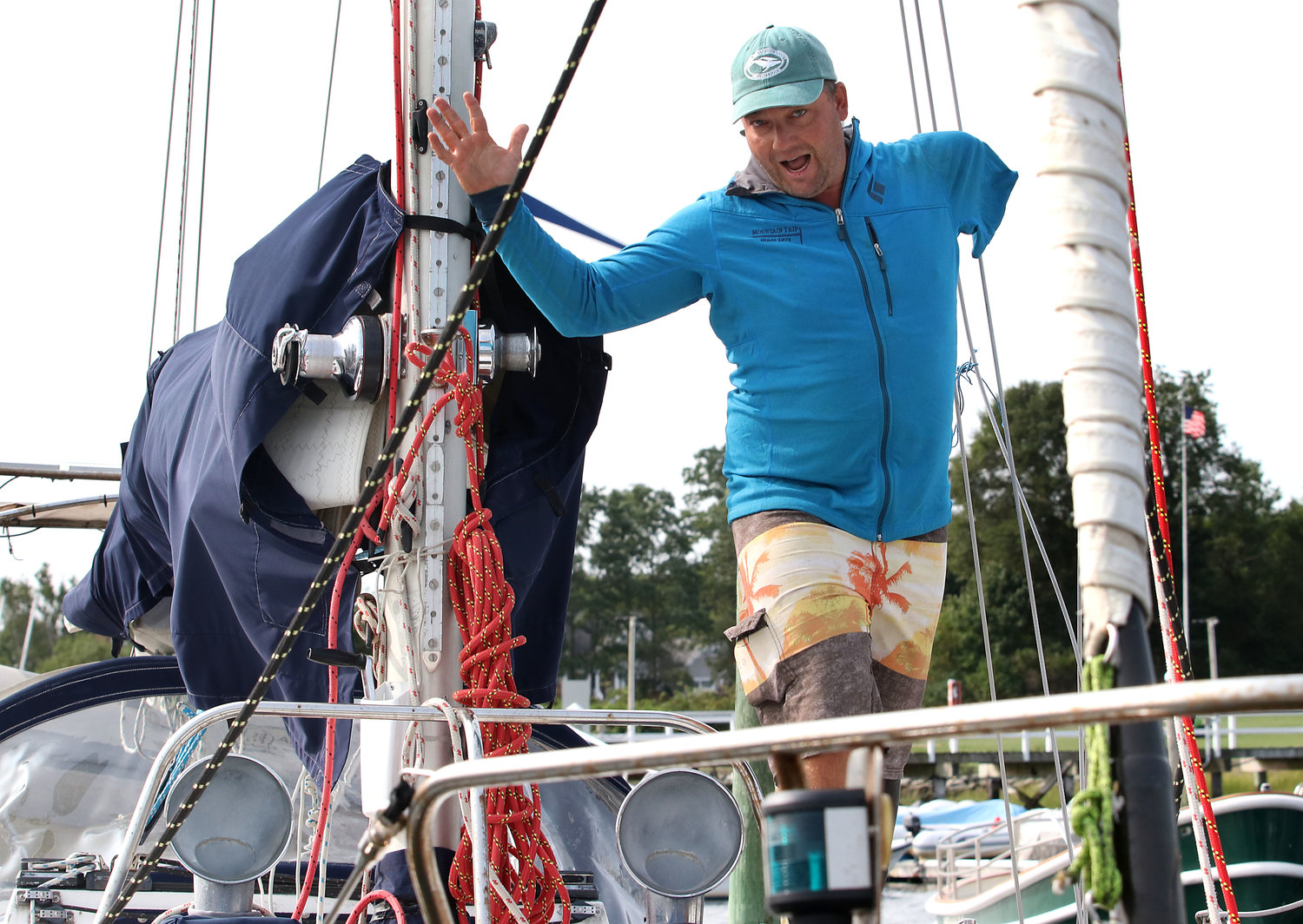 Dustin Reynolds is back in Bristol for a bit, pausing on his around-the-world journey, before setting off south, with an eye on the Atlantic hurricane season.
Photos by Richard W. Dionne Jr. 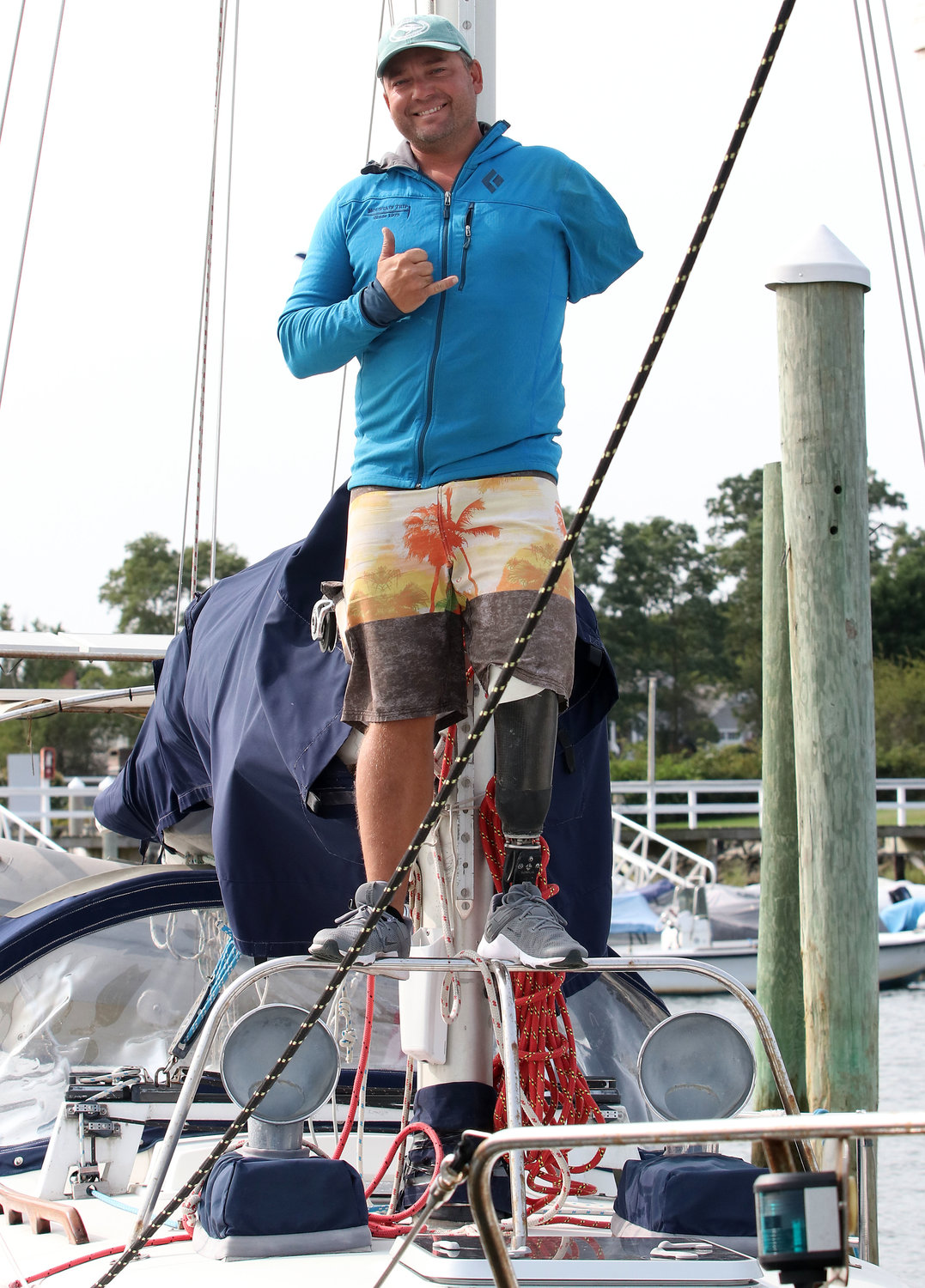 Dustin Reynolds is back in Bristol for a bit, pausing on his around-the-world journey, before setting off south, with an eye on the Atlantic hurricane season. 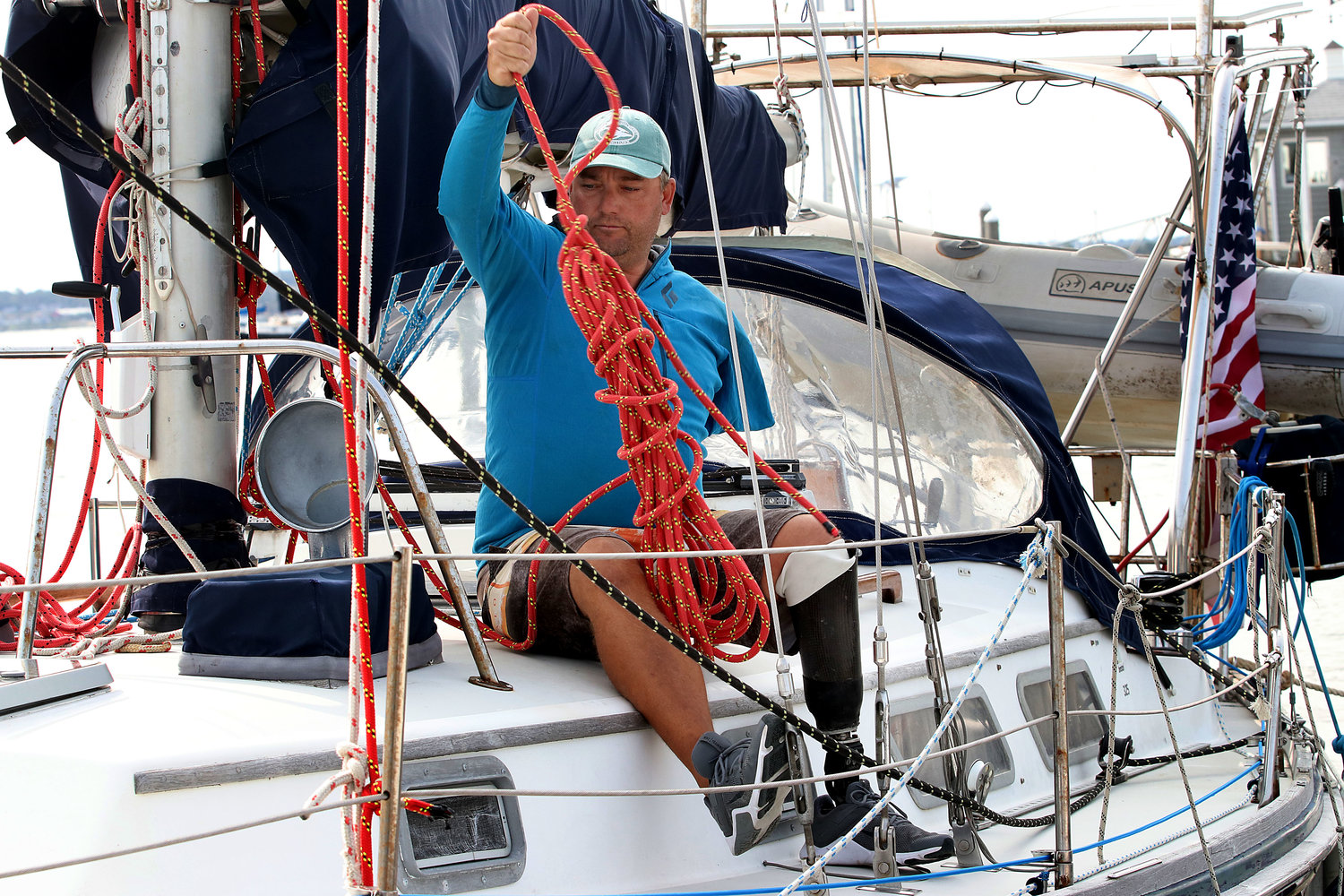 A double-amputee, Dustin Reynolds has adapted everything on his boat, or in his techniques, to allow him to sail solo.
Previous Next
Posted Friday, September 18, 2020 7:00 am
By Christy Nadalin

For someone who has spent the past few years sailing solo around the world, you wouldn’t think loneliness would be an issue. But for circumnavigating, double-amputee solo sailor Dustin Reynolds, COVID has changed the tenor of his journey in an unexpected way.

“This social distancing thing has made it pretty hard to meet people,” he said.

When we caught up with Mr. Reynolds early in the summer, when he first arrived in Bristol for repairs and upgrades to Tiama, his 1983 Bristol 35, he mentioned the warm welcome he had received from other sailors along his journey to date.

“I grew up as a poor kid, and I didn’t think yacht clubs were something that would accept me, so I had no intention of interacting with other sailors,” he said at the time. “But it was quite the opposite. Yacht clubs and other sailors have been fantastic, so welcoming. It’s a very small community, and it is rare that I’ll go somewhere and not know one or two other boats in the anchorage.”

Not just any sailor

Mr. Reynolds’ story is unique, and not just because he’s a world class sailor who did not grow up immersed in the sport’s rarefied culture. A victim of a drunk driver nearly 12 years ago, he lost a leg and an arm in that accident. As he emerged from recovery and reevaluated his life, he decided to become a record-setting distance sailor.

Undeterred by near-total unfamiliarity with the sport, he looked up some how-to videos on YouTube before plunking down $12,000 on a 40-year old Alberg and setting off for a monthlong sail around Hawaii. Since then his adventures have taken him through the Pacific, to Thailand and Malaysia, to Africa, Antarctica, and the Caribbean. In that time, he upgraded the Alberg to the Bristol he sails today, but age and mileage took its toll on her as well.

Andy Tyska, of Bristol Marine, saw Mr. Reynolds’ story on YouTube and reached out to him back in December, with an invitation to come and stay and have Bristol Marine help fix Tiana.

“At the time I said no,” said Mr. Reynolds, early this summer. “Not because I wasn’t grateful but I was smelling the finish line and wanting to get back to Hawaii.

Since arriving in Bristol in the late spring, Mr. Reynolds completed two yacht deliveries, from St. Thomas to Fort Lauderdale and from Fort Lauderdale back to Bristol, by July 4. He also took a jaunt northeast to check out Provincetown and the Vineyard. Since then he has been in town working with the assistance of Bristol Marine on repairs and upgrades, including new rigging, electronics, motor repairs, and an AIS (Automatic Identification System), a tracking system for vessels. “My boat’s in the best shape it has been in since I bought it,” he said.

With his repairs completed and the New England sailing season winding down, Mr. Reynolds is planning to set sail for points south, with one eye warily on the hurricane forecast. First stop, New York, where he wants to check out Montauk and Long Island, and New York City, where he’s never been and hears you can anchor in the shadow of the Statue of Liberty.

“As soon as hurricane season is finished, in November, I’ll head to the Bahamas,” he said. His plan, ever flexible, is to check out some more islands, including Jamaica and Turks and Caicos, then head to Columbia, through the Panama Canal, then on to the Galapagos and French Polynesia. Of course, these days, in addition to worrying about weather, he has to concern himself with local COVID restrictions at his destinations, and whether he will be allowed onshore to reprovision. At the latest, he plans to complete his solo circumnavigation — the first double amputee to do so — by November, 2021.

To continue following his journey, visit his website at thesinglehandedsailor.com.