PROVIDENCE — The Rhode Island Department of Environmental Management (DEM) will begin stocking trout in freshwaters across Rhode Island, including in the East Bay, from Friday, Oct. 1, to … 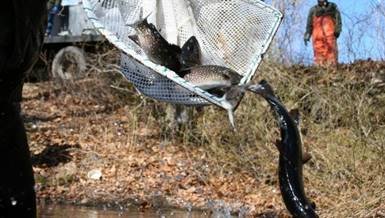 PROVIDENCE — The Rhode Island Department of Environmental Management (DEM) will begin stocking trout in freshwaters across Rhode Island, including in the East Bay, from Friday, Oct. 1, to Friday, Oct. 8,, for the fall fishing season – a popular time for recreational fishing.

Water levels and temperatures at these locations will be reassessed at the time of stocking. Please note that due to low water conditions and Cyanobacteria (blue-green) algae alerts, several areas normally stocked with trout are not on this list. When conditions improve later in the season, other areas may be considered for trout stocking.

Daily trout stocking updates will be available on DEM’s Division of Fish and Wildlife’s Outdoor Education Facebook page or by calling 401-789-0281 or 401-539-0019. Visit www.dem.ri.gov for further information.

DEM would like to remind anglers of the following Freshwater Fishing Regulations:

The minimum size of all trout or charr species, taken from the waters of the state, shall be eight inches, measured from the tip of the snout to the tip of the tail. This regulation applies to both wild and stocked trout.

The minimum size for domestic or land-locked stocked, Atlantic salmon shall be 11 inches total length.

The following activities are prohibited:

In accordance with RI General Laws 20-11-3, the taking of any fish in the freshwaters of the state by any means other than angling, using a hook(s) and fishing line, except for carp, suckers, and fall fish, which may be taken by snares, spears, or bow and arrow.

And, the taking of any fish in the freshwaters of the state by net, seine, trawl, or similar device; except for a dip net, for the landing of a fish caught by hook and line, and the taking of baitfish. Cast nets and gills nets shall be prohibited.

All other Freshwater Fishing Regulations apply.