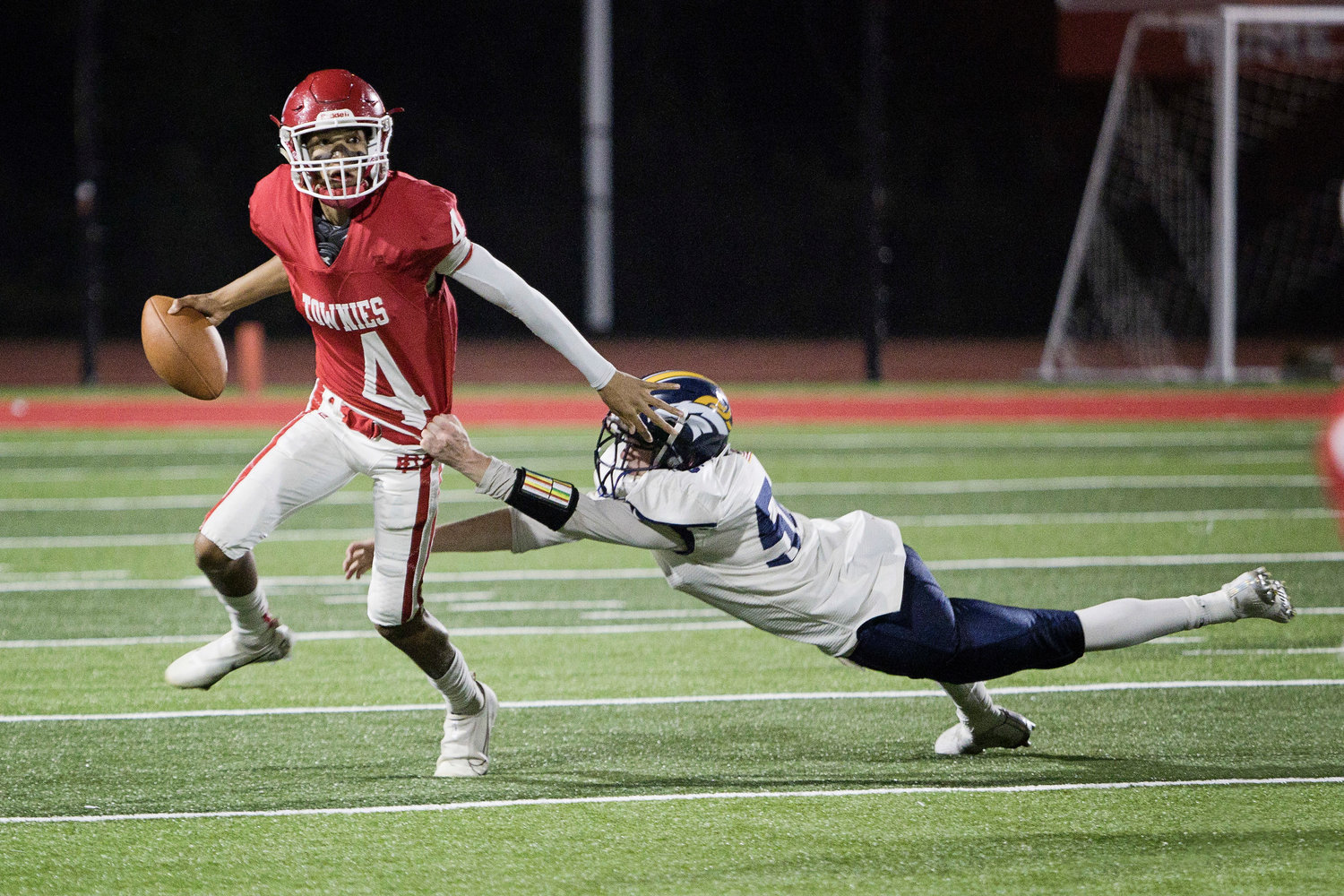 Quarterback Max Whiting (left) accounted for the lone EPHS touchdown as the Townies fell to Cumberland, 27-6, in their league outing last weekend.
Photo by Julie Furtado
Posted Sunday, October 17, 2021 10:31 am
By Jake Parent

CUMBERLAND - The run game duo of senior Cam Pedro and junior Jo’el Baker proved to be the key for Cumberland High School Friday night, Oct. 15, as the host Clippers defeated East Providence, 27-6, in a Division I football contest at their Tucker Field.

Pedro and Baker each scored a touchdown for Cumberland, which improved to 3-2 in the D-I standings, while also contributing significant carries throughout the contest. The loss dropped the Townies to 0-4 in league play and 0-5 overall.

After a fumble from East Providence on the first drive of the game, which occurred deep in Clipper territory and was returned for 50 yards, Pedro reached the endzone on a 29 yard run after 3 offensive plays. The touchdown and extra point kick made it 7-6 Cumberland.

The sides then traded punts. A fumbled snap on a Clippers punt recovered by the Townies’ Yusef Abdullah set East Providence deep in Cumberland territory. The Townies later converted a third-and-10 with quarterback Max Whiting running for 11 yards. Whiting next took it in himself putting the Townies within 1, though the extra point was missed.

Cumberland went straight to work following the ensuing kickoff with 5 minutes to go until the half, starting with a 10 yard run from Pedro. Three straight handoffs to Baker, including gains of 10, 13, and a touchdown on a 30-yard run put Cumberland up 8, 14-6, with 3 minutes to go.

The Clippers defense added to their lead just before intermission. Whiting gained 6 on a run but a botched toss in the backfield to Joel Arias was scooped and scored by the Clippers. The Townies blocked the extra point, leaving Cumberland’s lead 20-6 by halftime.

Action slowed down between the teams to start the second half. The Clippers drove down the field on the opening drive of the third quarter, but their eventual 21-yard field goal attempt was blocked.

In the fourth quarter, Baker set off on a 70 yard run to the endzone, although a holding penalty returned the ball to the Townies 30. Three plays later, however, senior Josh Melo reached the endzone on a 18 yard run, giving Cumberland the game sealing touchdown. After trading two punts, Cumberland knelt the ball down two times finishing off the game.

Although a loss, junior Yusef Abdullah was the star of the game for the Townies, who had well over 70 rushing yards, critical third down conversions, and recovering a fumbled snap, setting the Townies for their only touchdown.

East Providence now prepares for a road game against Cranston East on Saturday, Oct. 23, at Cranston Stadium. Kickoff for the Townies versus the likewise winless, 0-4 Thunderbolts is 1:30 p.m.

— Parent is an EPHS sophomore who contributes to the athletic department’s Twitter feed, @EPtowniesSports.