John Hanley was voted in as the new President of the Warren Town Council. 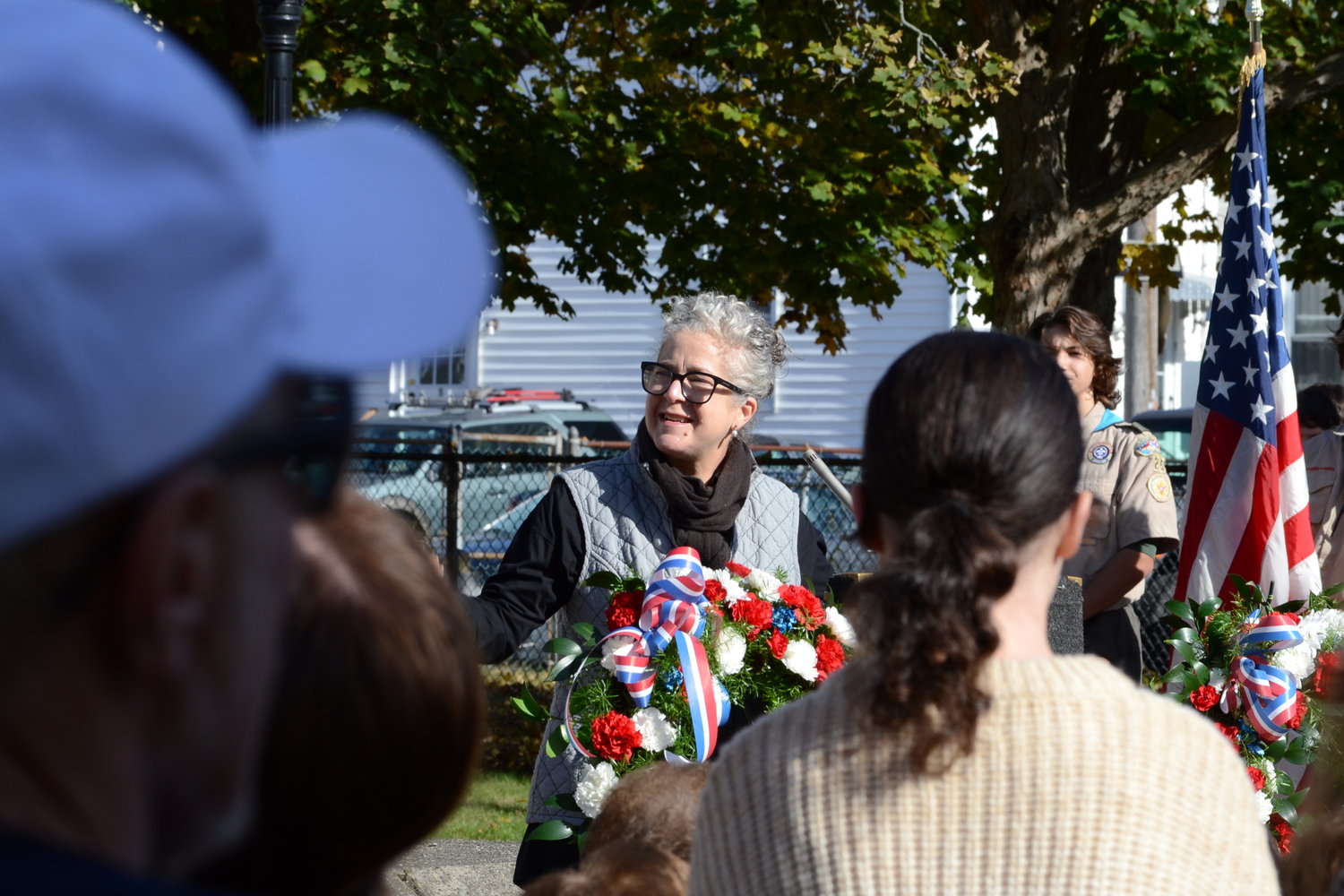 Keri Cronin, pictured here during the town’s Honor Roll ceremony on Veteran’s Day in 2021, served two terms as Council President but was not supported by a majority of the council to continue in that role. She will face re-election in 2022. 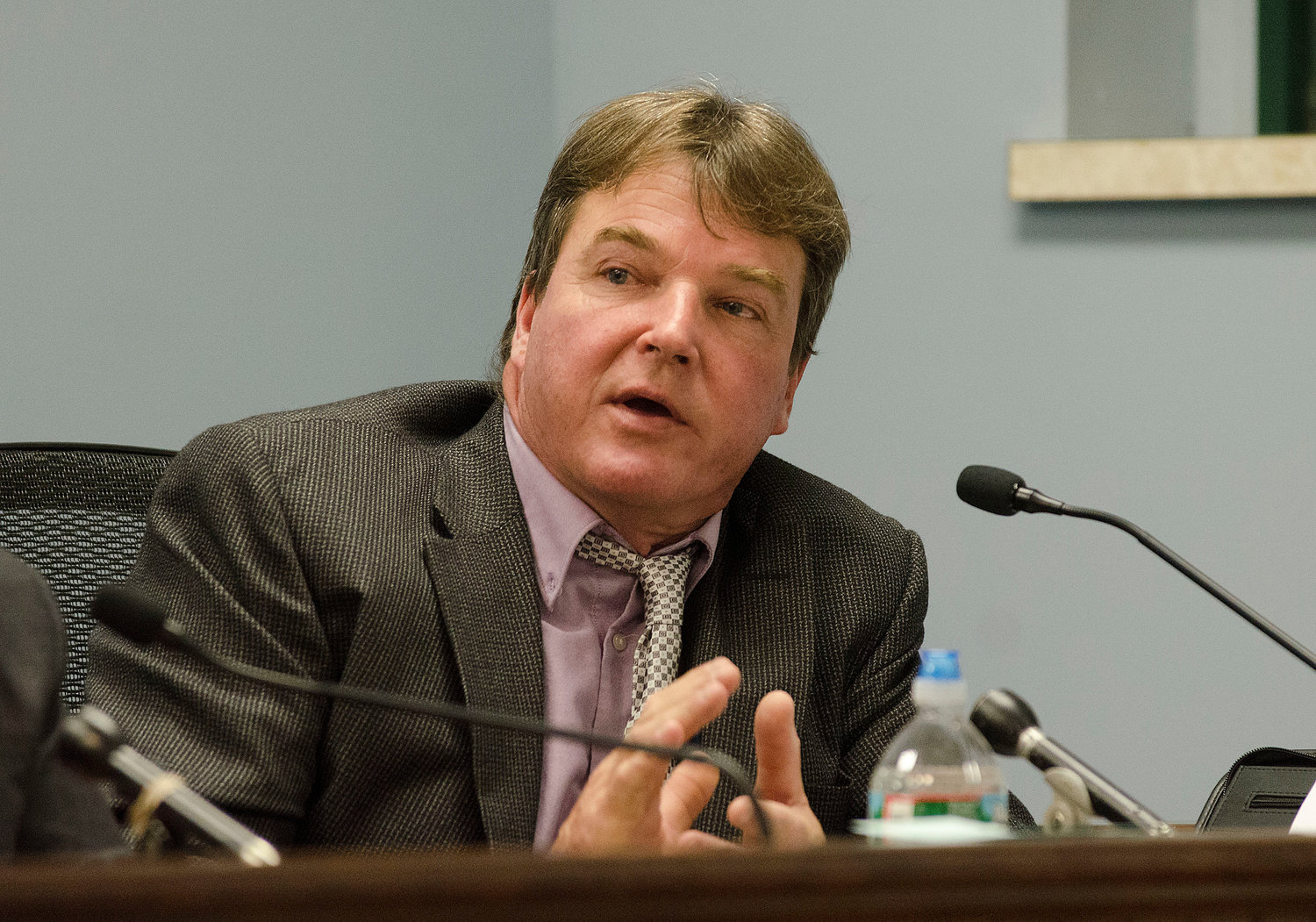 John Hanley, who is entering his eighth year on the Town Council, was voted in as the new Council President during last week’s meeting.
Previous Next
Posted Thursday, January 20, 2022 10:50 am
By Ethan Hartley

Councilmen John Hanley and Steve Calenda were voted in as the next iteration of President and Vice President, respectively, of Warren’s top governmental board during the council’s monthly meeting on Jan. 11.

Councilman Brandt Heckert motioned to return the president position to Cronin, but the motion did not receive a second, after which Calenda nominated Hanley, which was seconded by Councilman Joe DePasquale and approved by that trio, with Heckert abstaining. Heckert then nominated Cronin for vice president, but again received no second. Hanley then nominated Calenda and DePasquale served as the swing vote to approve that nomination. Heckert voted ‘no’ on Calenda’s appointment.

“My time as the chairperson, the leader, the president of this Town Council has been an honor and a privilege and I will support and stand by whatever the vote brings this evening,” Cronin said prior to the vote. “I would like to say that the accomplishments of the council have been significant these last three years and I’m quite proud of all that we’ve done. The work and the fortitude and the commitment and the loyalty of all the department heads, the manager, all of the support staff, the solicitors, police and fire during unprecedented times of pandemic and unspeakable loss and tragedies have just been really…it’s been truly fulfilling to see how people have come together and I’m so proud to be part of all this, and I’m looking forward to the rest of year doing good work for the Town of Warren.”

Cronin looks back on tenure
Elected to the Warren Town Council during the 2016 election, Cronin would become Council President in 2018 and was re-elected to that position in 2020. She said in a recent interview that she was proud to look back on her service to the town and reflected on some major developments that occurred.

She mentioned the town’s historic land acknowledgement statement, which recognized the indigenous Pokanoket Tribe as the ancestral owners of the land we now recognize as the East Bay — which is believed to be the first of its kind in New England — as particularly “significant and meaningful.”

Cronin said that Warren stands above its neighboring communities for its ongoing commitment to tackling some of the biggest, most complex issues facing residents today, including large-scale economic development plans and addressing the effects caused by climate change.

“I think the empowerment and the steps we’ve taken to address sea level rise, global warming, and our local geography and topography with Market to Metacom Project, getting off the ground and given full light of day and so far unanimous support, I think that is huge and will really setting us up for hopefully somewhat of a sustainable future,” she said.

Of course, governing in the face of the world’s greatest health crisis seen in a century merited mention as well.

“I’m really proud of the way everybody pulled together. You can’t prepare for that, you just can’t,” she said. “You have to dig deep and trust that the people you’re serving with and the people who work for the town are going to rise to the occasion, and they did. They really did. Our manager, department heads, fire chief, police chief, everybody, the DPW, they just pulled it together and I think the council was very unanimous in supporting all of those efforts. I’m very proud to have been part of that.”

Cronin heaped praise onto Town Manager Kate Michaud for her leadership, and credited much of the progress Warren has made in recent years to her.

“She is just so exceptional and professional and prepared and just pragmatic in her decisionmaking,” Cronin said.

“Much work to do” with social ills
Also meaningful to Cronin was the decision to fly the Black Lives Matter flag back in the summer of 2020, at the height of political upheaval surrounding police brutality and a reinvigorated discussion about systemic racism throughout the world. That moment of triumph, however, was tempered by what Cronin described as a “backlash of negativity” that arose from that decision.

“I’m proud that we voted to do it, but I was also disappointed to see how it brought out a level of unpleasantness that I don’t think truly reflects the community,” she said. “It’s sort of an example of the work we need to continue to do and the truth we all need to confront about ourselves and the world that we live in.”

Although Cronin didn’t dwell on the meaning of being a female leader during a time when conversations about power dynamics and gender are also front of mind, she did say that she experienced elements of intolerance and bigotry while serving as Council President.

“I probably straddle the generations of those who apply so much value to gender, because it is evolving as we speak,” she said. “Character and commitment and duty and work ethic are really the greater qualities that we should be placing the value on. Not to say that gender discrimination, sexism, intolerance, racism and all of those other nasties don’t still exist — they absolutely do, and I have in fact experienced those things during my time in the leadership position.”

Still, Cronin said that this kind of prejudicial thinking didn’t affect her leadership approach, and in general is being phased out.

“It is unpleasant, but I like to think I’ve risen above them and have not let them change the way I conduct myself. I’ve tried to lead by example and be better than those who are living in the past,” she said. “I think we’ve made great strides and it’s getting better, but there are still absolutely issues that exist and it’s out there and we still have much work to do. I think that those who hold onto those sort of archaic attitudes are sort of going away.”

Going forward
Cronin said that, now that she is not compelled to represent the council as its figurehead for various town and state events, she is looking forward to be able to dedicate more time to her Water Street business and to Discover Warren, the community group she co-founded which strives to promote local businesses in town.
Still, she looks to remain involved on the council.

“I won’t be running the meetings but we all have one equal vote, we all have a voice and the opportunity to express our voice, our opinion, our values, and our concerns,” she said. “It’s not going to be hugely different in terms of what the outcome is. I will continue to represent the town the same way I do and have done.”

Cronin said this week that she was still undecided on whether or not to run for re-election this year.

“I’m not a micromanager, so I’m not going to have my fingers in every department…That’s not the way I am,” he said. “We have great people working here and I’ll give them the reins to keep doing what they’re doing and only take charge if I think it is necessary.”

Hanley said that he believes the town is on “a really good path” at the moment, and looks forward to initiatives such as reinvigorating vacant storefronts through resources from the American Rescue Plan Act, and possibly a non-utilization tax in the weeks and months ahead.

“Not to generate money,” he explained, “But to give them a kick in the pants to do the repairs they need to do to make them marketable. We have a lot fo beautiful buildings downtown and a lot of ugly buildings downtown. With time and effort we can get 90 perfect of those stores up and running and have a much more vibrant downtown.”

Hanley, a lifelong Warren resident aside for one year spent in Bristol, expressed his best wishes towards Cronin despite the change in power.

“We have a really great council and we all get along. I have nothing but respect for Keri, and she did a great job, it’s just time for a leadership change,” he said. “I’m looking forward to working with them all towards making Warren a little bit more special than it already is.”