PORTSMOUTH — Standing in front of a wall inscribed with the names of 794 soldiers who fought off the British in 1pa778, Kasim J. Yarn said he and others have a duty to keep their memories … 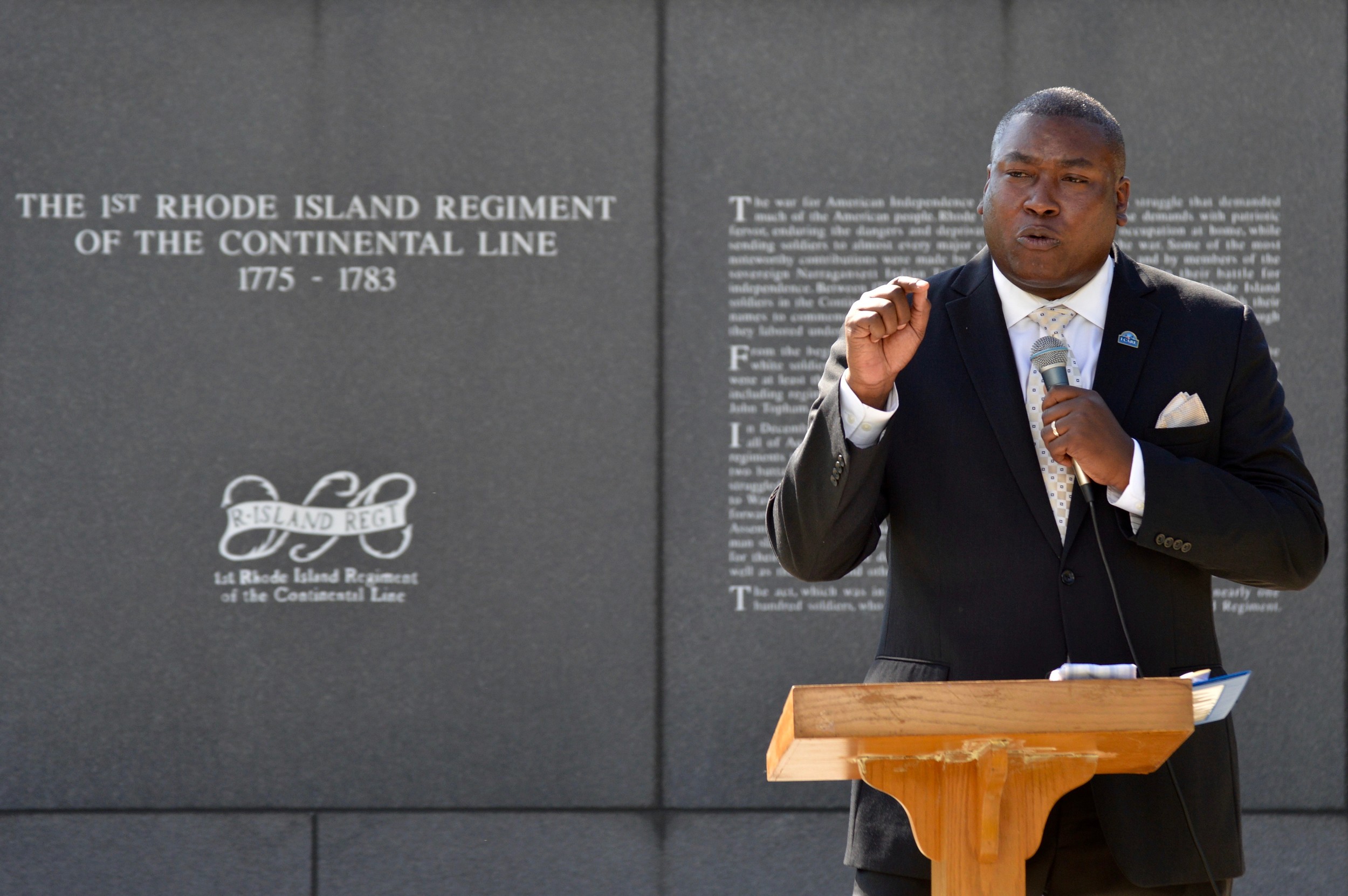 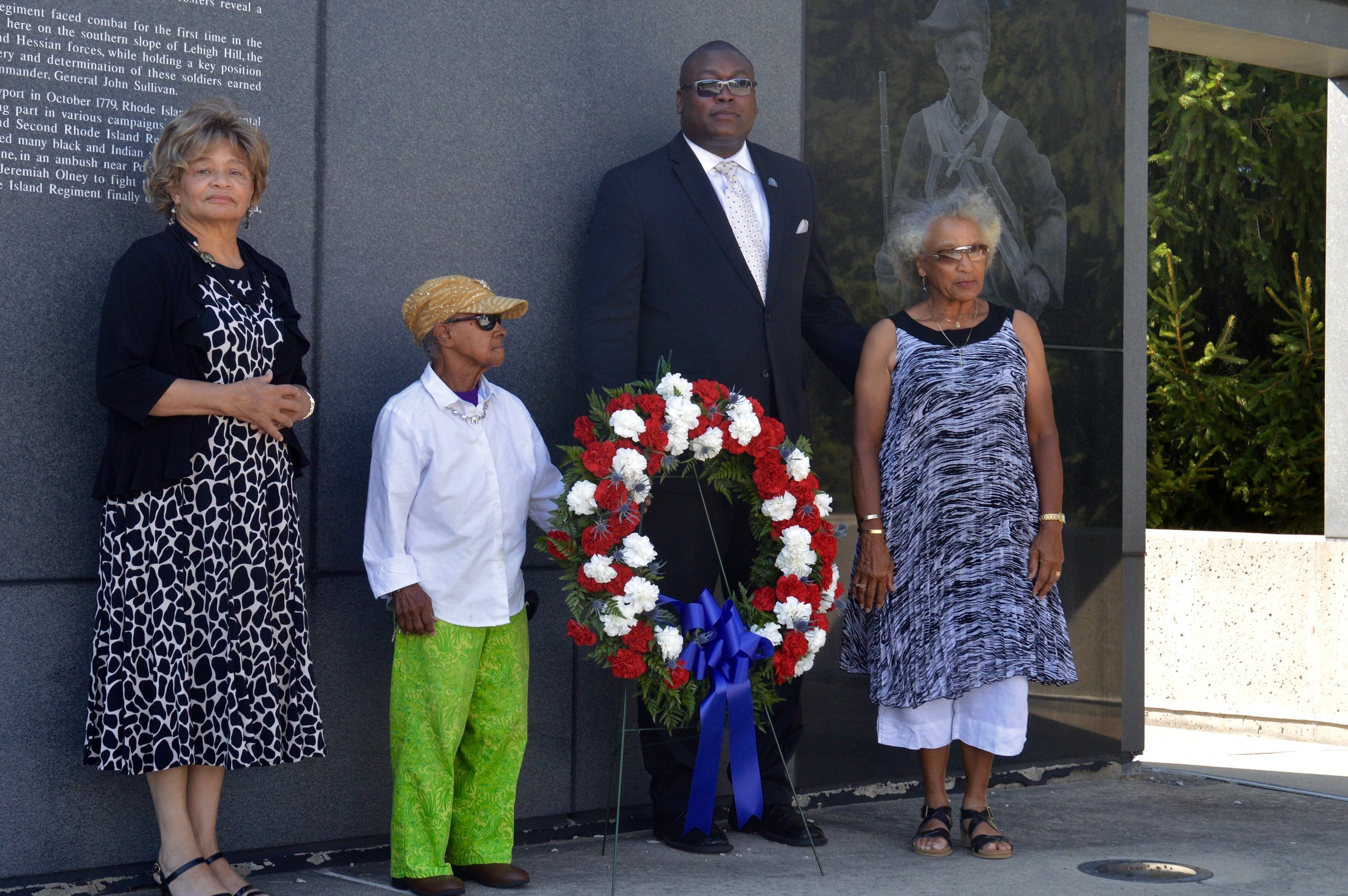 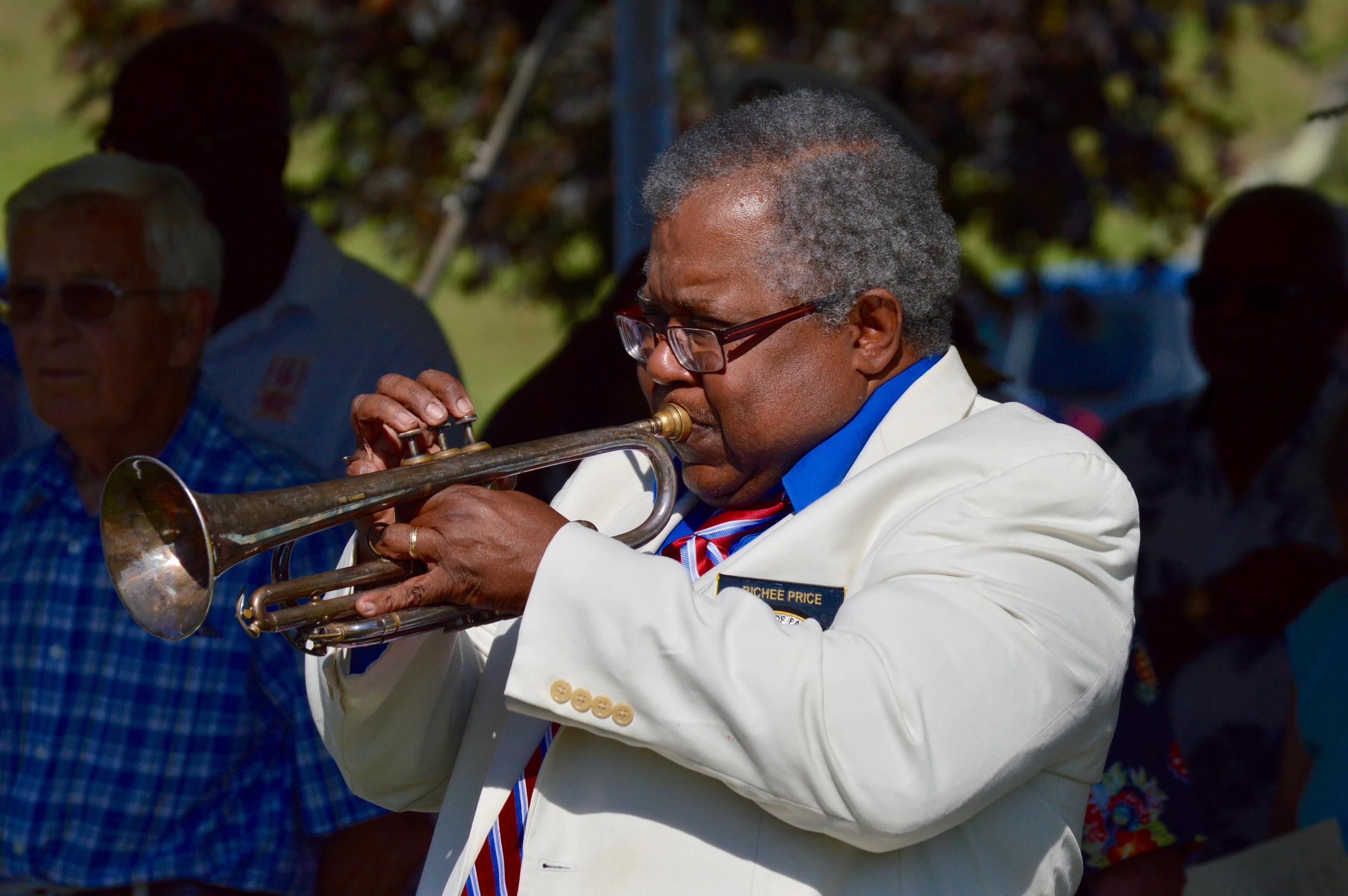 Richard Price, the band director at Portsmouth Middle School, plays “Taps” at the conclusion of the ceremony.
Jim McGaw 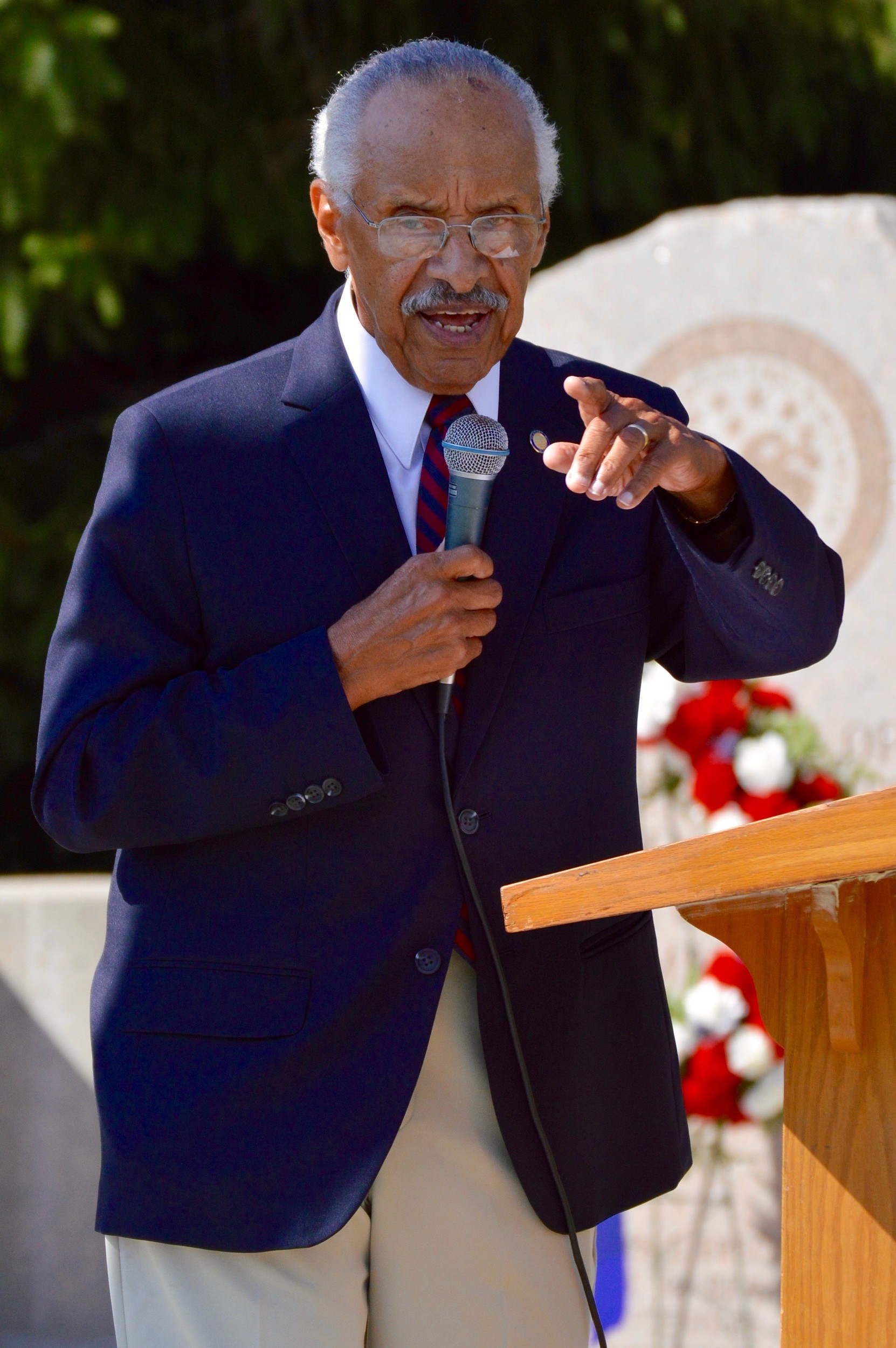 Paul Gaines, the former mayor of Newport and master of ceremonies on Sunday, points to a spot where the Battle of Rhode Island was fought.
Jim McGaw 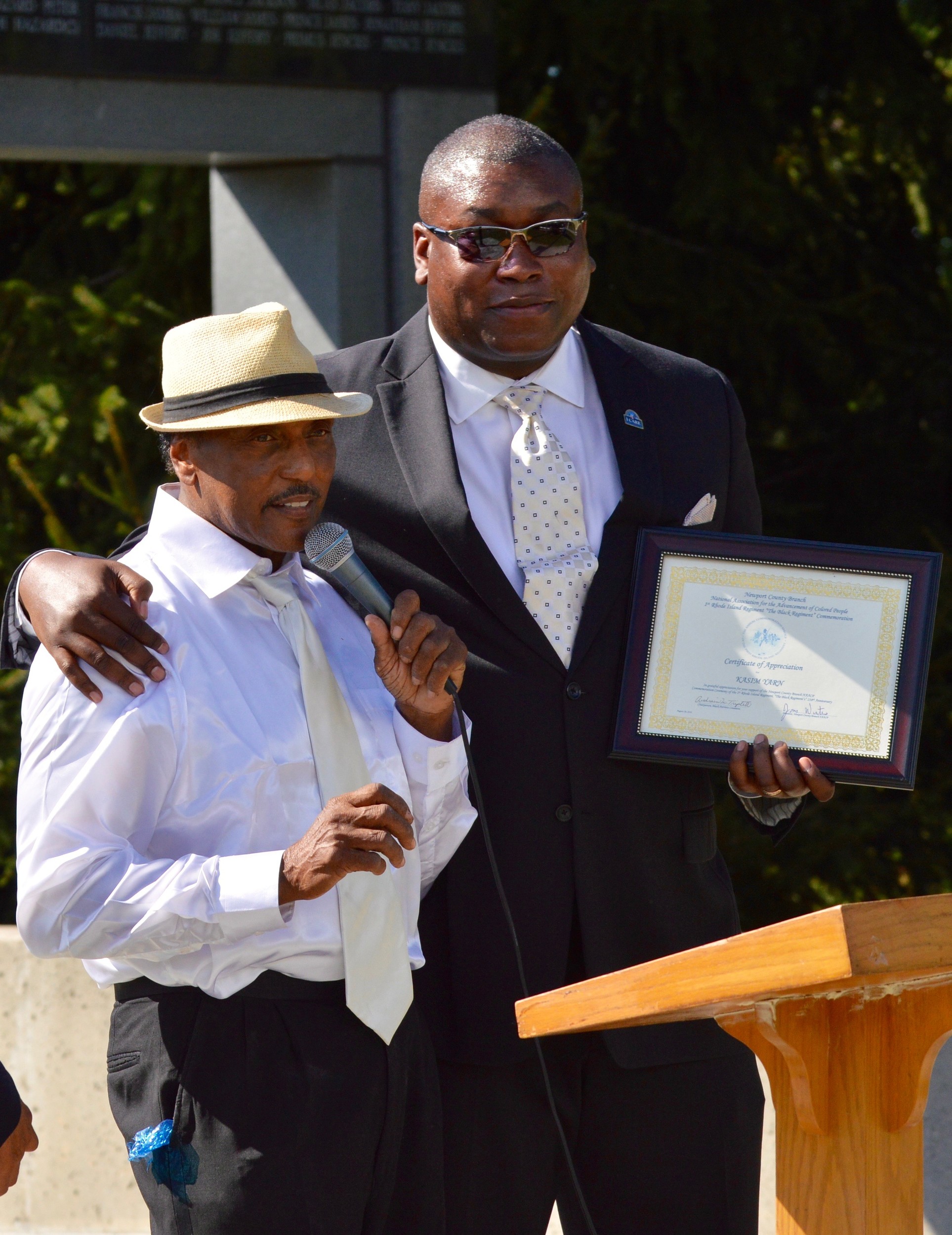 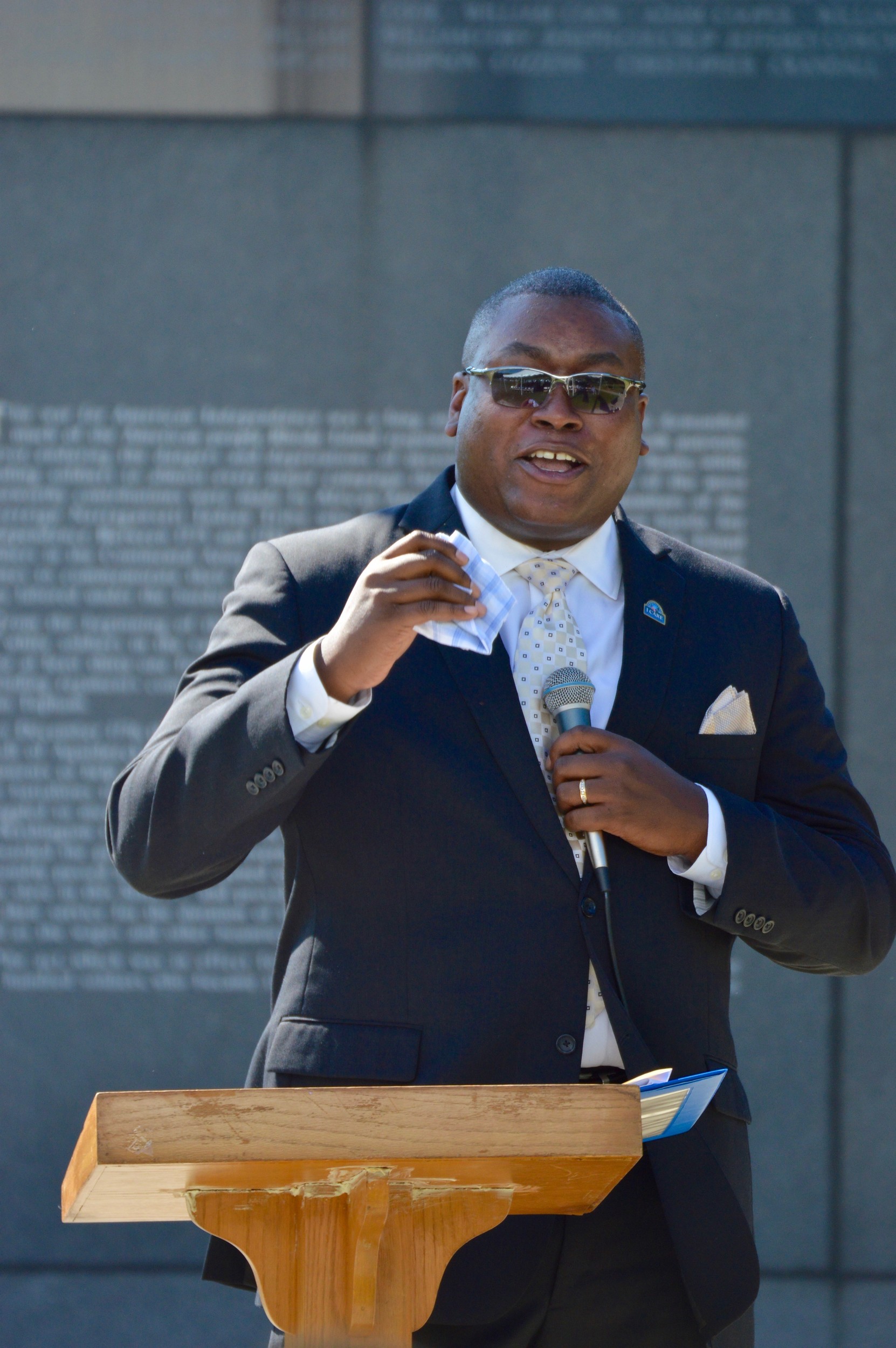 Guest speak Kasim Yarn displays a handkerchief he brought along in case he got emotional during his speech. He did.
Jim McGaw 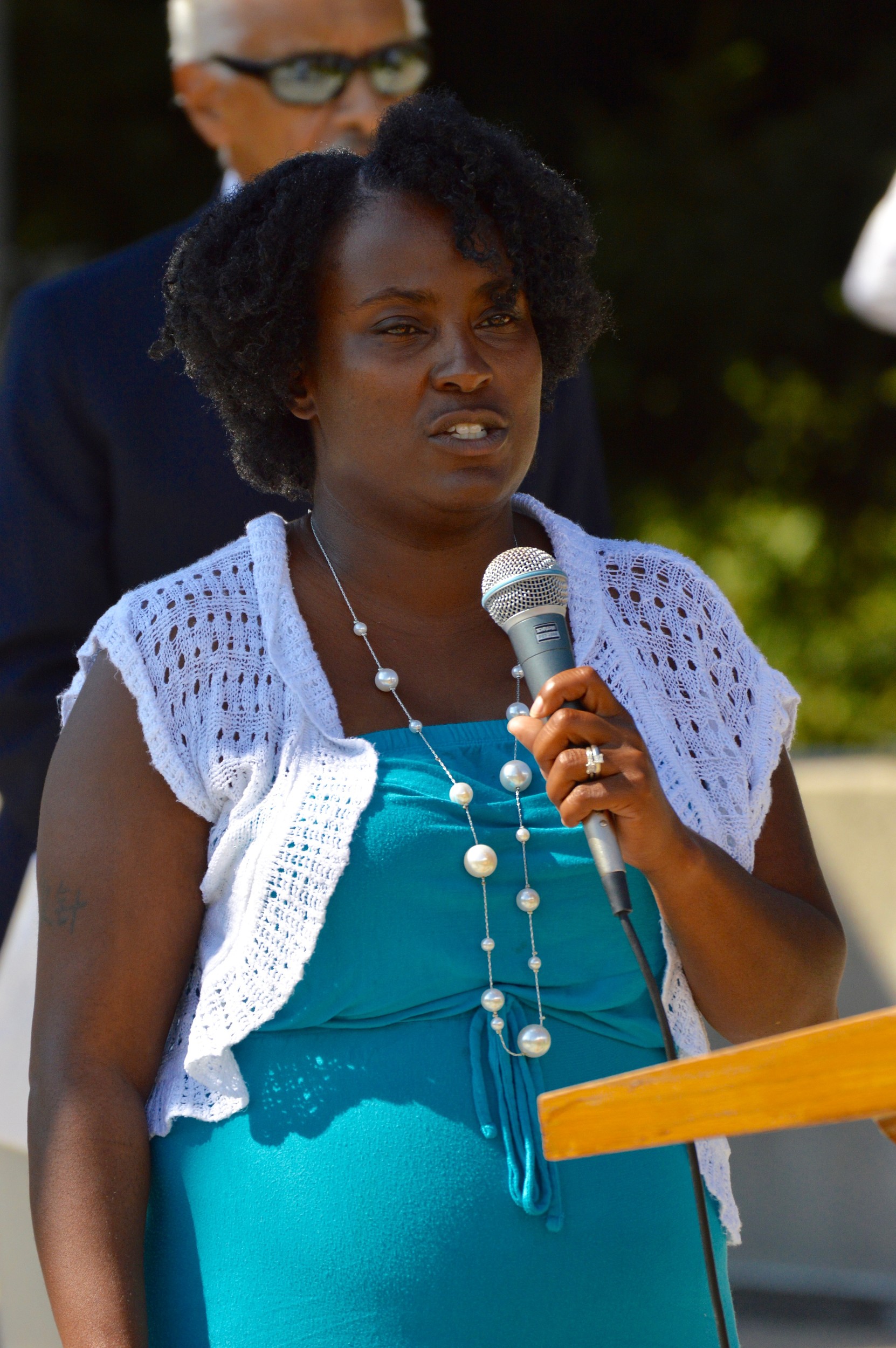 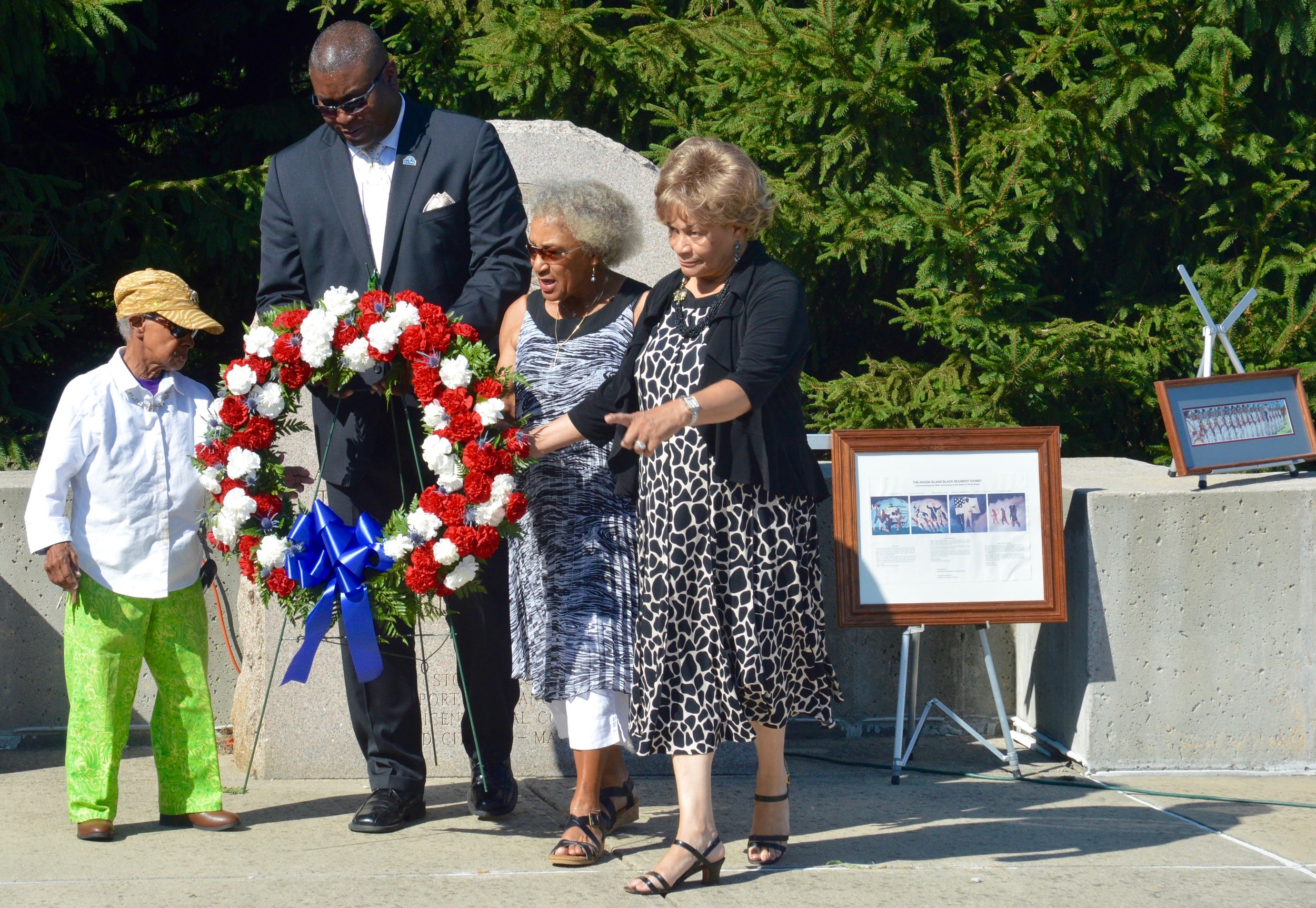 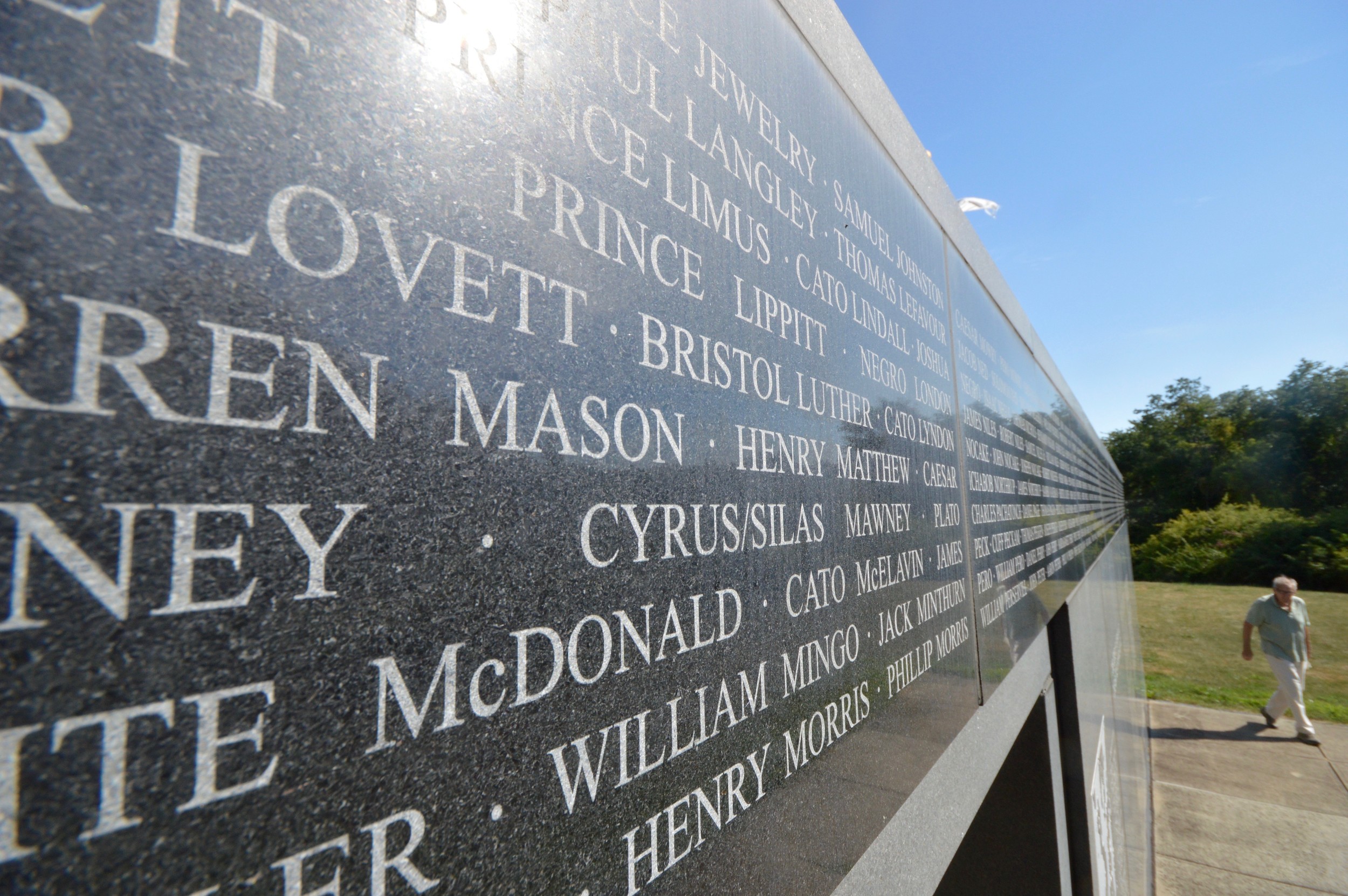 There are 794 names inscribed on the monument recognizing the 1st Rhode Island Regiment at Patriots Park.
Jim McGaw 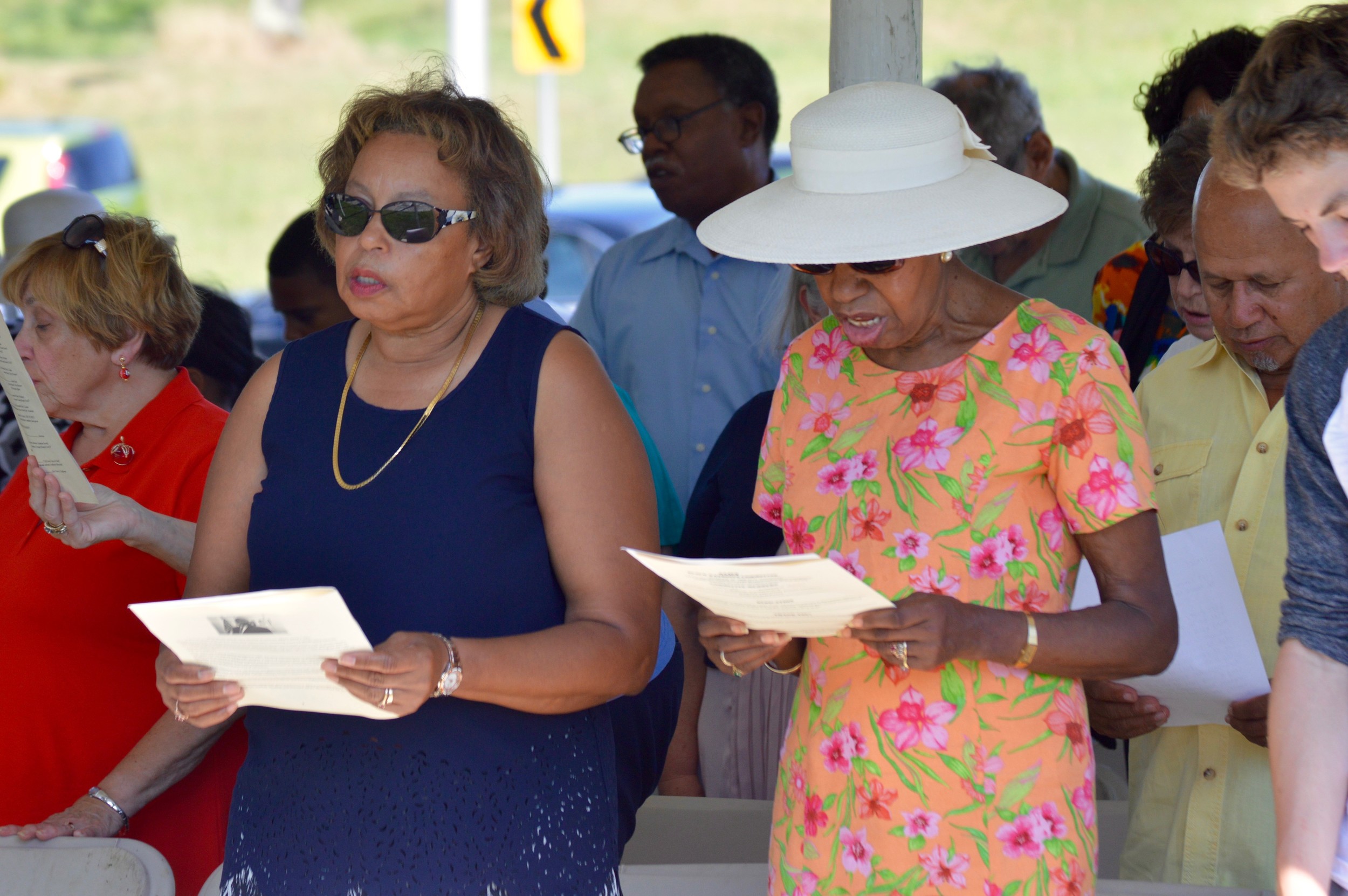 Members of the audience sing “Lift Every Voice and Sing,” considered to be the “black national anthem.”
Jim McGaw 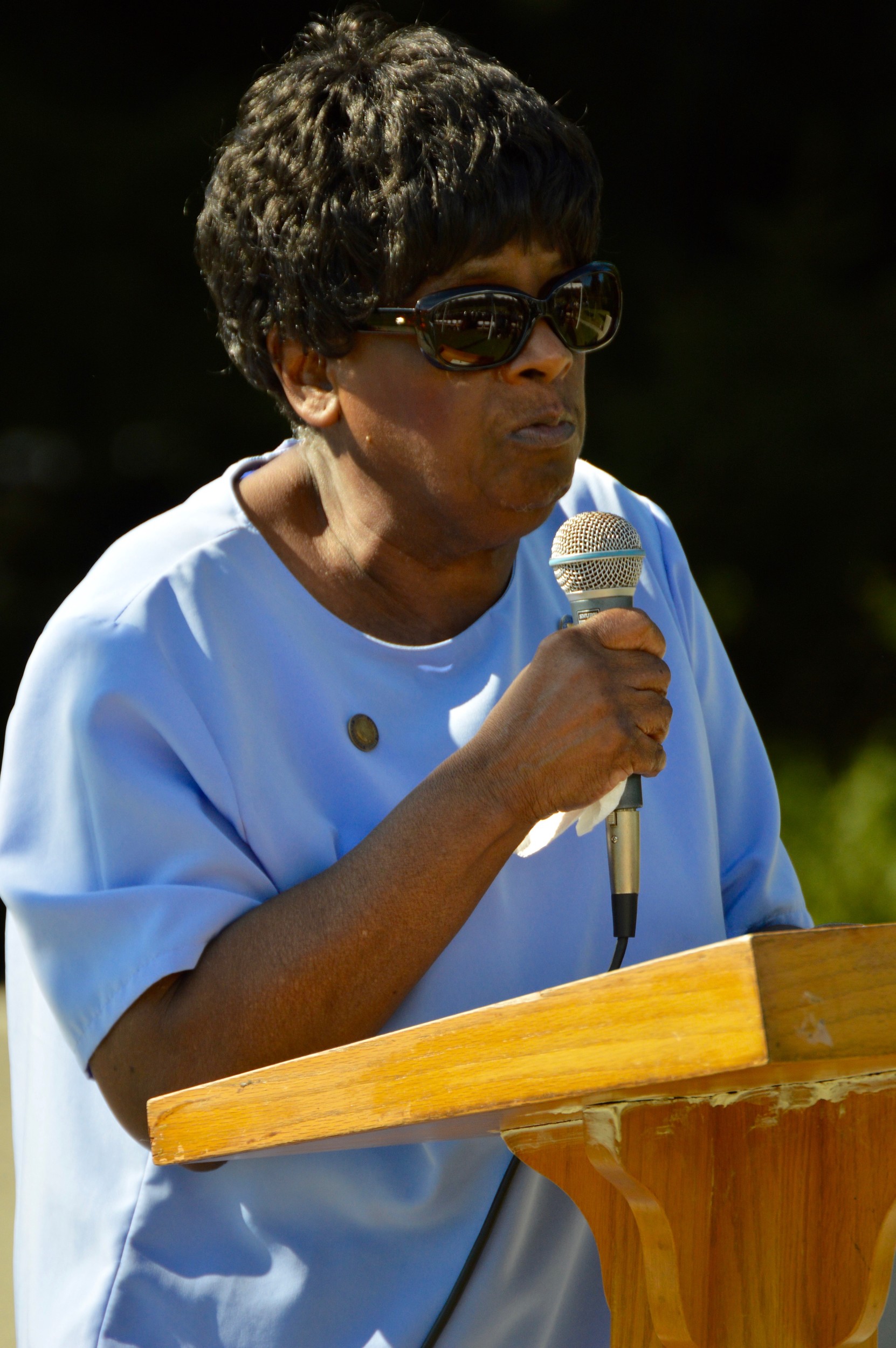 We had men who were slaves who were willing to die for this country.”
Kasim J. Yarn, Rhode Island director of veterans affairs
Jim McGaw

PORTSMOUTH — Standing in front of a wall inscribed with the names of 794 soldiers who fought off the British in 1pa778, Kasim J. Yarn said he and others have a duty to keep their memories alive for future generations.

Mr. Yarn, who became Rhode Island’s first director of veterans affairs when he was appointed to the post earlier this year, was the guest speaker at the Newport County Branch of the NAACP’s annual ceremony Sunday commemorating the 1st Rhode Island Regiment.

“Part of my task is to honor them and to honor the men on the wall behind me,” said Mr. Yarn, who retired as a lieutenant commander in the U.S. Navy in May after 25 years of military service. “May God bless the men of the 1st Rhode Island Regiment. Without you, there would be no me.”

The Continental Army unit, also known as the “Black Regiment,” was a contingent of slaves, freemen and Native Americans who valiantly stopped the advances of the British and Hessian forces during the Revolutionary War’s Battle of Rhode Island on Aug. 29, 1778. The skirmish was fought near Patriots Park, located at the intersection of routes 114 and 24, where about 80 people gathered for the ceremony.

“The courage displayed by the soldiers of 1778 was unsurpassed by any other regiment,” Mr. Yard said. “Three times the British forces attempted to attack, but our men held them back three times. We had men who were slaves who were willing to die for this country.”

It’s important to remember the regiment’s legacy when thinking about today’s veterans, he said.

“Today, many of our sons and daughters are returning home with amputations, disfigurements, physical ailments, post-traumatic stress disorder, among other ailments. It is nearly impossible for these veterans and their families to forget the sacrifices they’ve made, so why should we allow the memories of these men to elapse?” he said, gesturing to the monument behind him.

“They have protected Rhode Island and preserved what would later become our way of life. The 1st Regiment had the moral courage to focus on the state’s needs, not their own.”

Mr. Yarn’s own life path was shaped by three pivotal events in the Civil Rights struggle, all of which took place in his home state of Mississippi.

“I remember sitting in my algebra class when I was a junior in high school. Our teacher shared actual newspaper clippings from those three events. Her message to us: ‘Education is key to equality,’” he said.

That summer he joined the Navy, and through the Delayed Entry Program found himself in boot camp within 12 hours of receiving his high school diploma — “running away from Mississippi as a child,” he said.

Sunday marked the 53rd anniversary of Martin Luther King Jr.’s “I Have a Dream” speech, he noted.

“I epitomize Dr. King’s dream,” he said. “I get to lead this great Ocean State as the first director of veterans affairs for the state of Rhode Island, as an African-American man. I get to give back to a state that has given me so much.”

Paul L. Gaines, the former mayor of Newport who served as master of ceremonies, said people shouldn’t take the site of the Battle of Rhode Island — the only Revolutionary War battle in which a segregated African-American unit fought — for granted. It’s one of only 2,400 land markers listed on the National Register of Historic Places, he said.

“Something happened here that didn’t happen any place else in the United States history,” he said.