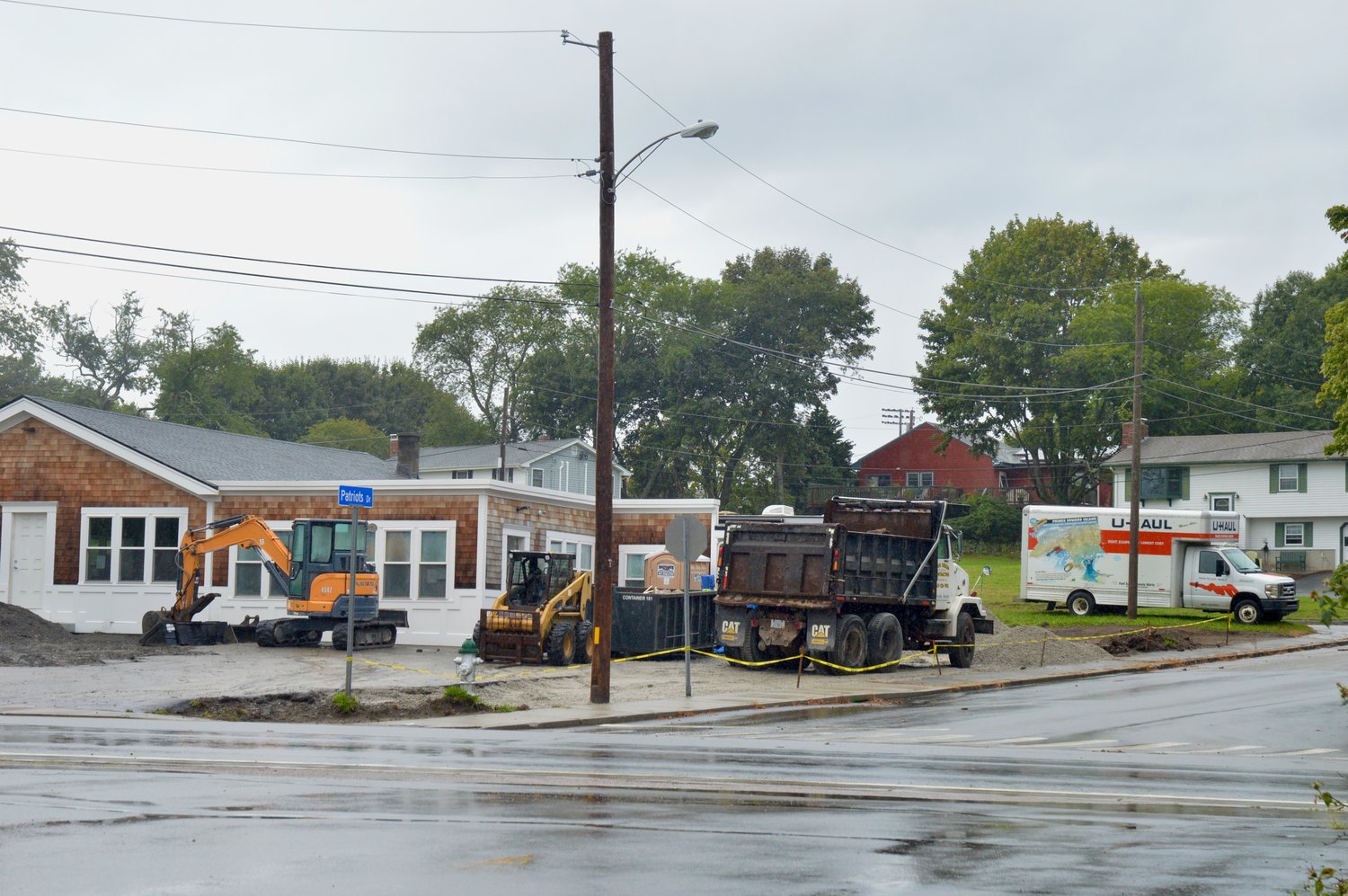 The contractor for Rhode Island Oak Counseling and Wellness, a new business where the old Kaufman's Hardware used to sit, plans to put in a curb cut so vehicles can enter via East Main Road and exit onto Patriots Drive.
Posted Wednesday, September 14, 2022 8:01 am
By Jim McGaw

PORTSMOUTH — The subject that took up the bulk of the discussion at Monday's Town Council meeting was the site of the old Kaufman's Hardware store at the corner of East Main Road and Patriots Drive.

Amanda LaRose hopes to open up her Rhode Island Oak Counseling and Wellness business at that location by next week, but the matter of a curb cut had not been resolved as of Monday.

Neil Hayes, the general contractor for the job which included gutting and rebuilding the old structure, had requested a new curb cut at the top of the lot to Patriots Drive. His idea was to have motorists enter the parking lot from East Main Road, and exit via Patriots Drive. Without the curb cut, vehicles would have to back up onto East Main Road to leave the property, he said.

However, Department of Public Works Director Brian Woodhead denied his application, citing pedestrian safety concerns. “It’’s not very safe for the kids to be walking down that sidewalk, so that’s why I denied it,” Woodhead said. Hayes was before the council Monday to appeal Woodhead’s decision.

Police Chief Brian Peters said he was also concerned about pedestrian safety, and Town Planner Lea Hitchen said she’d like to see a parking plan for the business. (Hayes said he’d like to have 10 parking spaces, while council member Keith Hamilton said five or six was more realistic.)

Council member Daniela Abbott said while she valued Woodhead’s opinion, traffic safety around the intersection in front of the business was a bigger concern, so the curb cut made sense.

After additional discussion, the council voted unanimously to overturn the DPW director’s denial of the curb cut and to direct Hayes, Woodhead, Hitchen and Chief Peters to work together to come up with a safe solution. Hayes was also directed to submit an engineer’s parking plan, to make the entrance on East Main and the exit on Patriots, and to resolve an issue regarding excavation work. (Hayes was excavating on town property, but stopped when he learned of his mistake.)

LaRose, who moved here two months ago from Virginia, said there is a great need for counseling services in Portsmouth, especially those that accept insurance like hers will. The council wished her the best of success.

In other business Monday, the council voted unanimously to approve a resolution stating it “intends to further review and conduct due diligence to fully evaluate the Mayflower Wind proposal, its impacts on the town and to assess the costs and benefits associated with this project, so as to establish the town’s position on this project in order to advise” the R.I. Energy Facility Siting Board (EFSB), which is reviewing the company’s proposal.

Hamilton, who put the resolution on the agenda, said he wanted to see a full environmental impact study done before the EFSB approved anything. He also expressed concerns over the cable route’s potential impact on the gas and water pipelines located in the Sakonnet River.

The council unanimously ratified Town Administrator Richard Rainer, Jr.’s appointment of Ryan Kilpatrick of Charlestown as the town’s new finance director. He succeeds Lisa Lasky, who announced her resignation in May and left for a job at Roger Williams University.

Kilpatrick has serviced as lead specialist in government contracts at General Electric Aviation, and developed financial standard operating procedures while at Supervisory of Shipbuilding in Groton, Conn. While working for the government, he also performed audits with the Naval Sea Systems Command and is adept in financial management and analysis, budgeting, contract management, financial report writing, and strategic planning.

The Prudence Island Volunteer Fire Department got a boost when the council voted unanimously to approve more than $13,600 in American Rescue Plan Act (ARPA) funds for the purchase of a LUCAS chest compression system to assist with cardiopulmonary resuscitation (CPR).

Fire Chief Paul Ford requested the funding, saying the system will lead to better outcomes with patients who need CPR — especially those who live on the island, where long transports are often needed. Performing CPR manually can be very tiring, which can put a strain on patient care.

Ryan, a physician, added that these modern devices deliver chest compressions in a more consistent manner, and have been used in hospitals for years.

The Prudence Island Volunteer Fire Department, through fund-raising events, put up $3,500 toward the system, which costs a little over $17,100. The ARPA funding will cover the balance.