EAST PROVIDENCE — The $189.5 million new East Providence High School project as a whole has surpassed the 85 percent complete mark and remains on time and under budget.

Sam Bradner, of the … 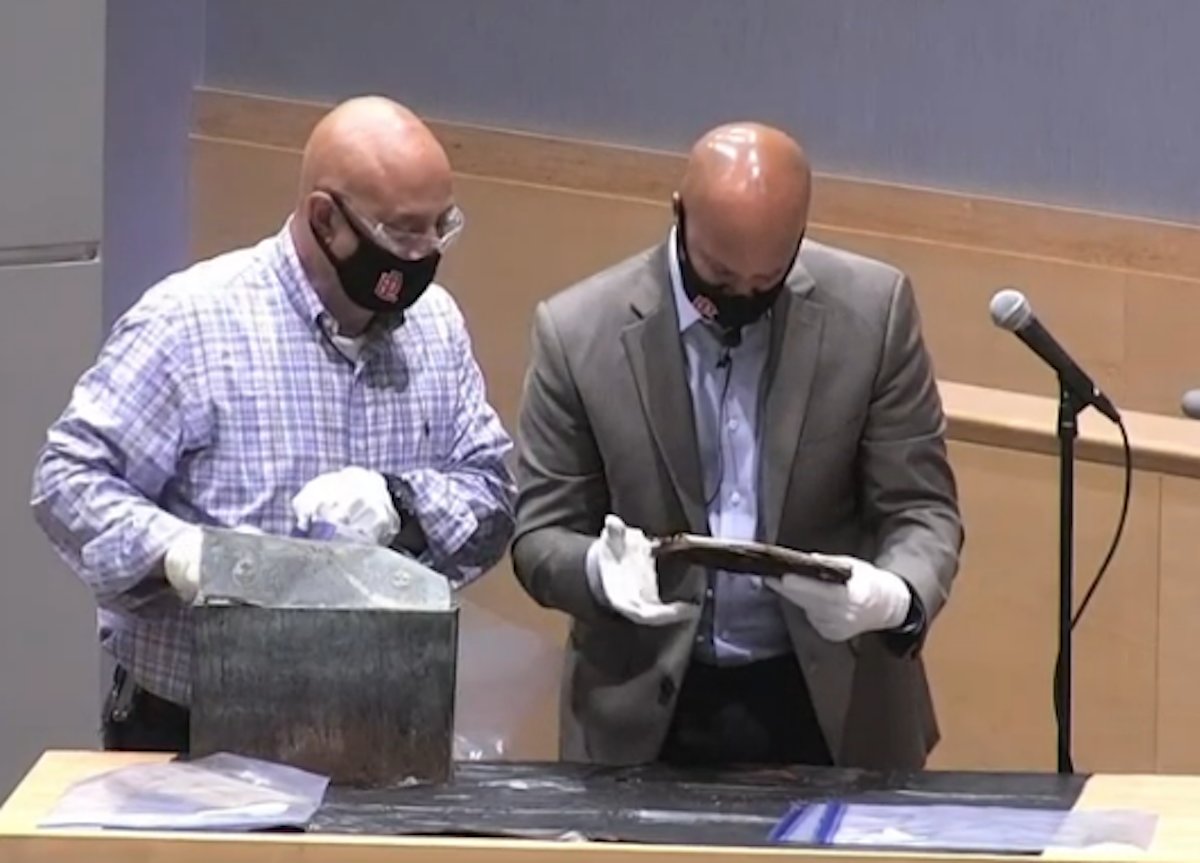 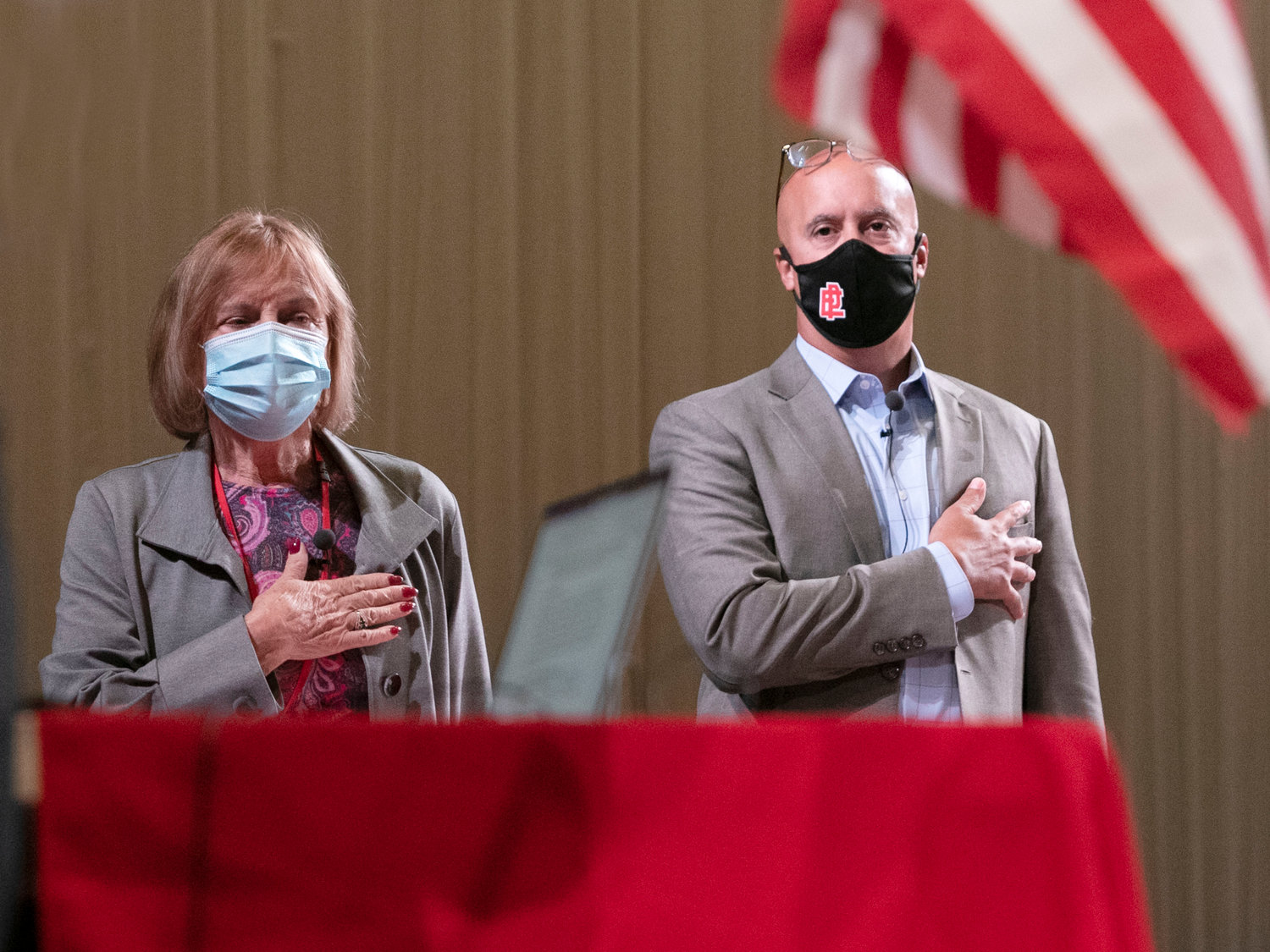 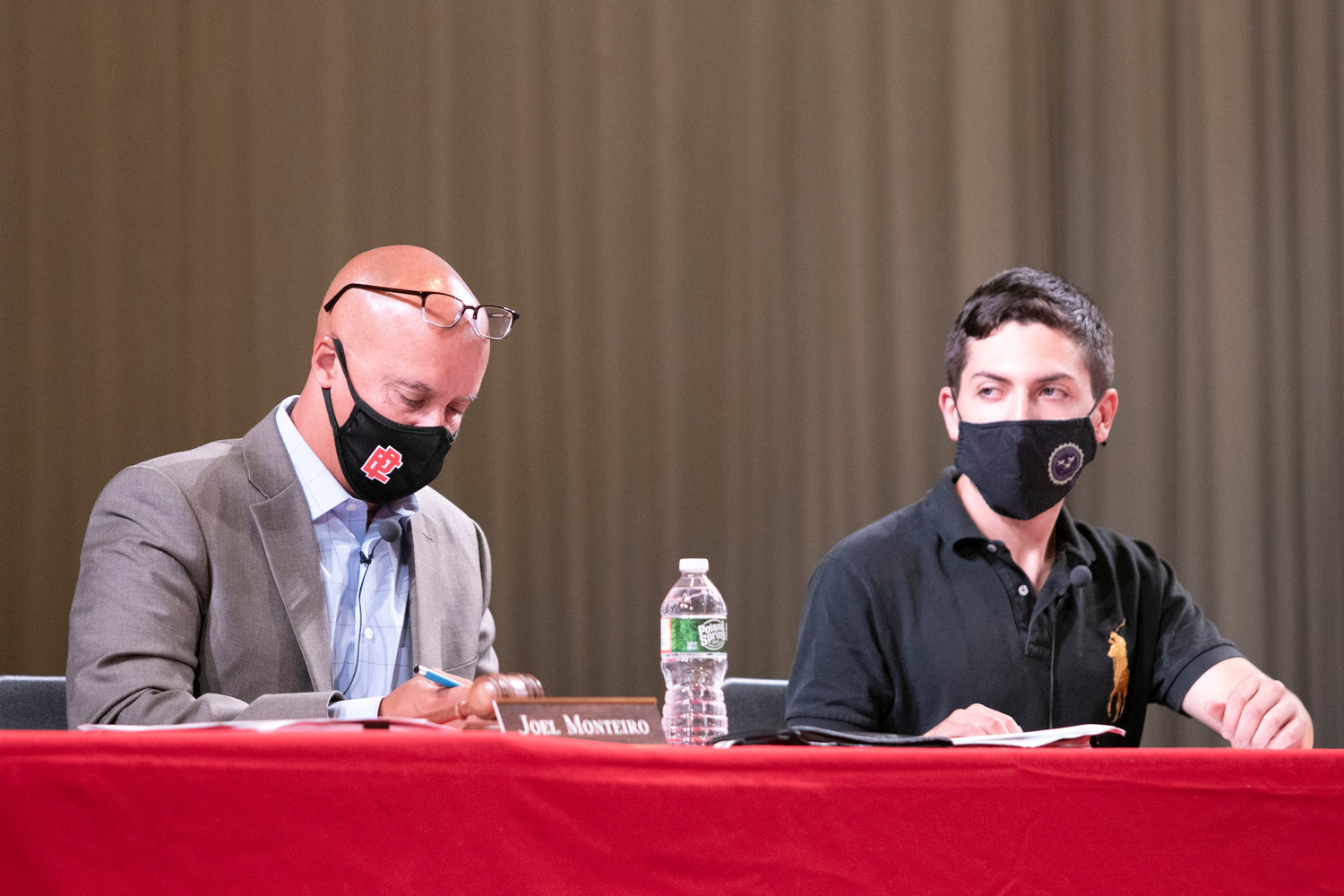 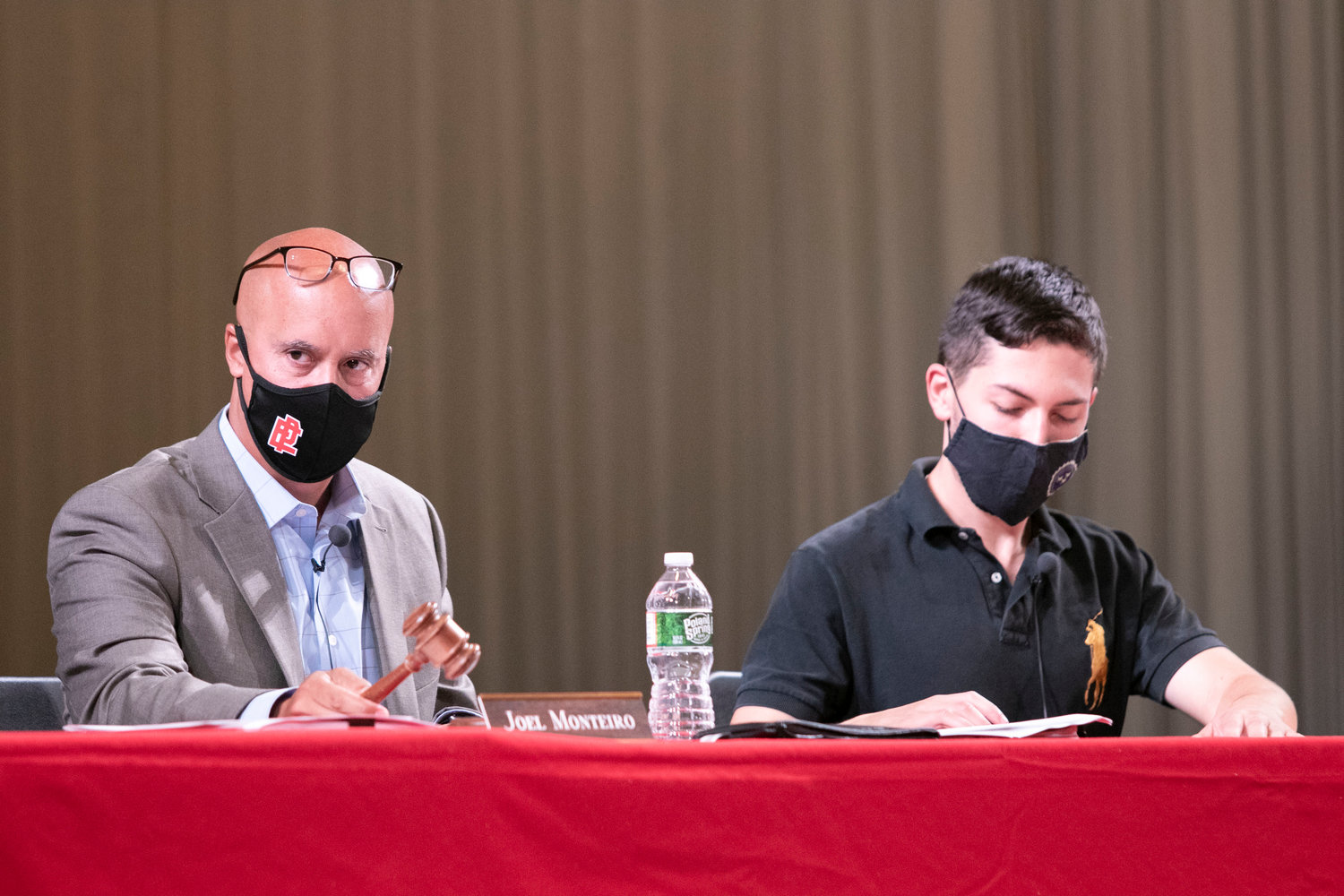 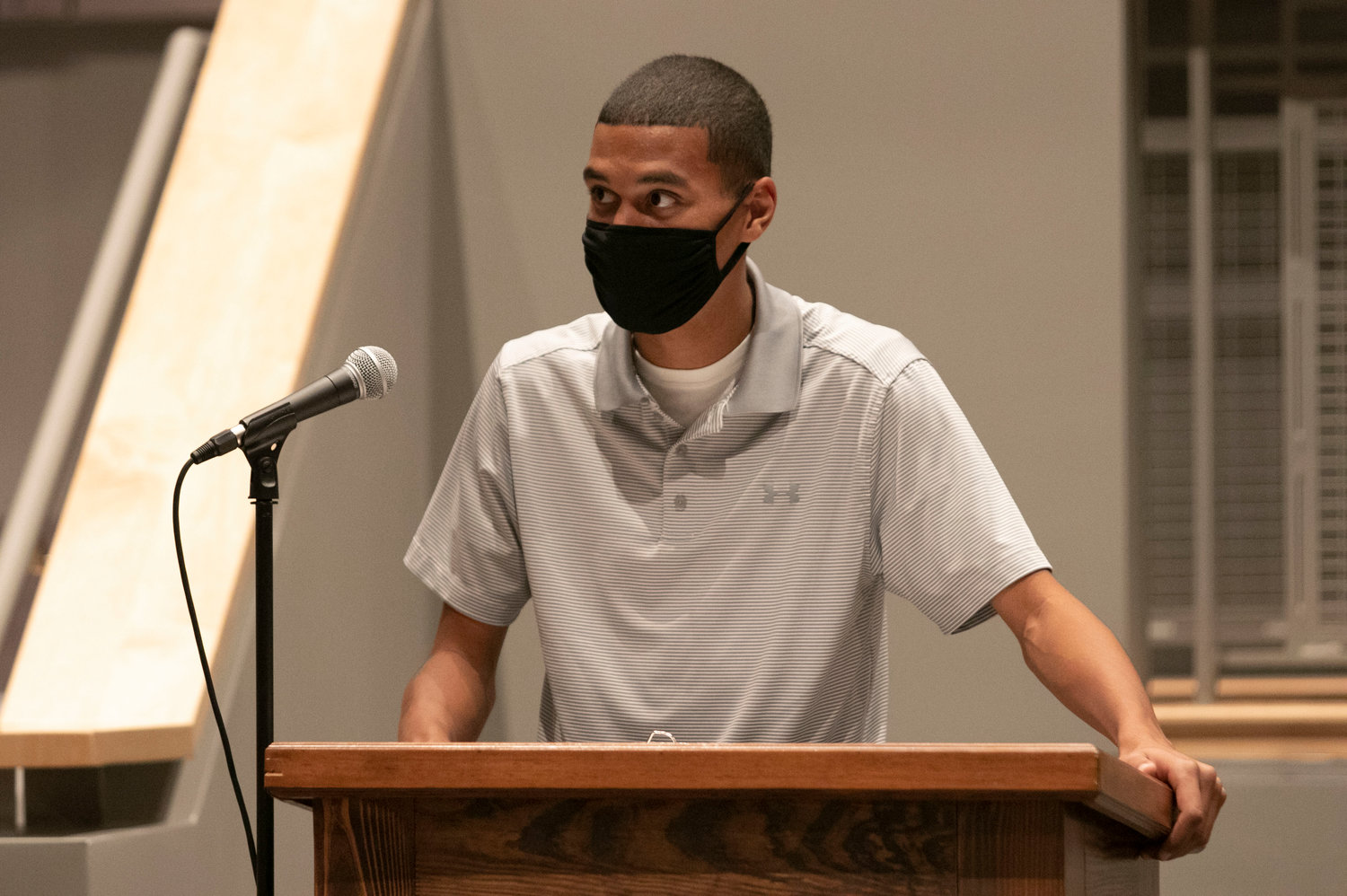 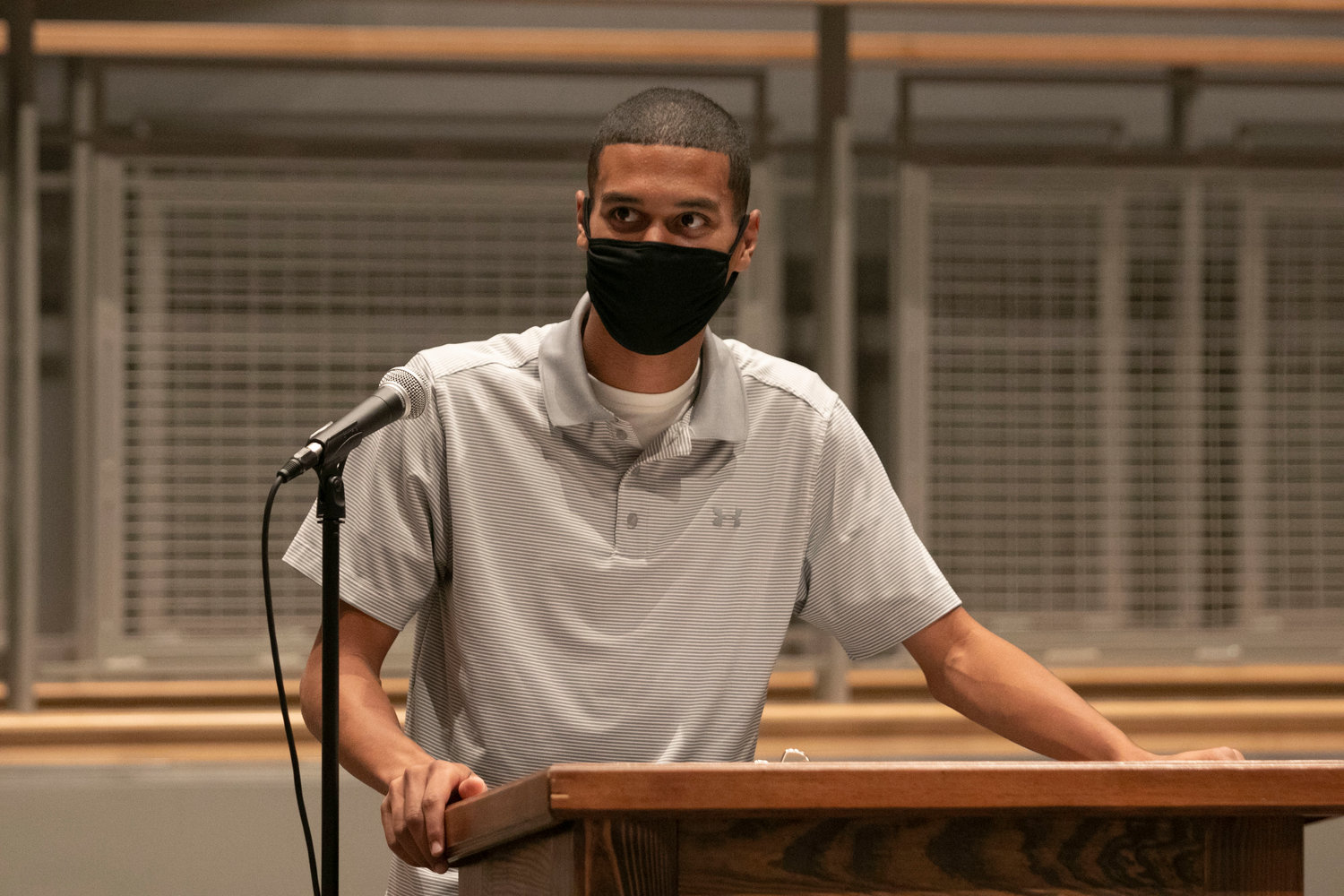 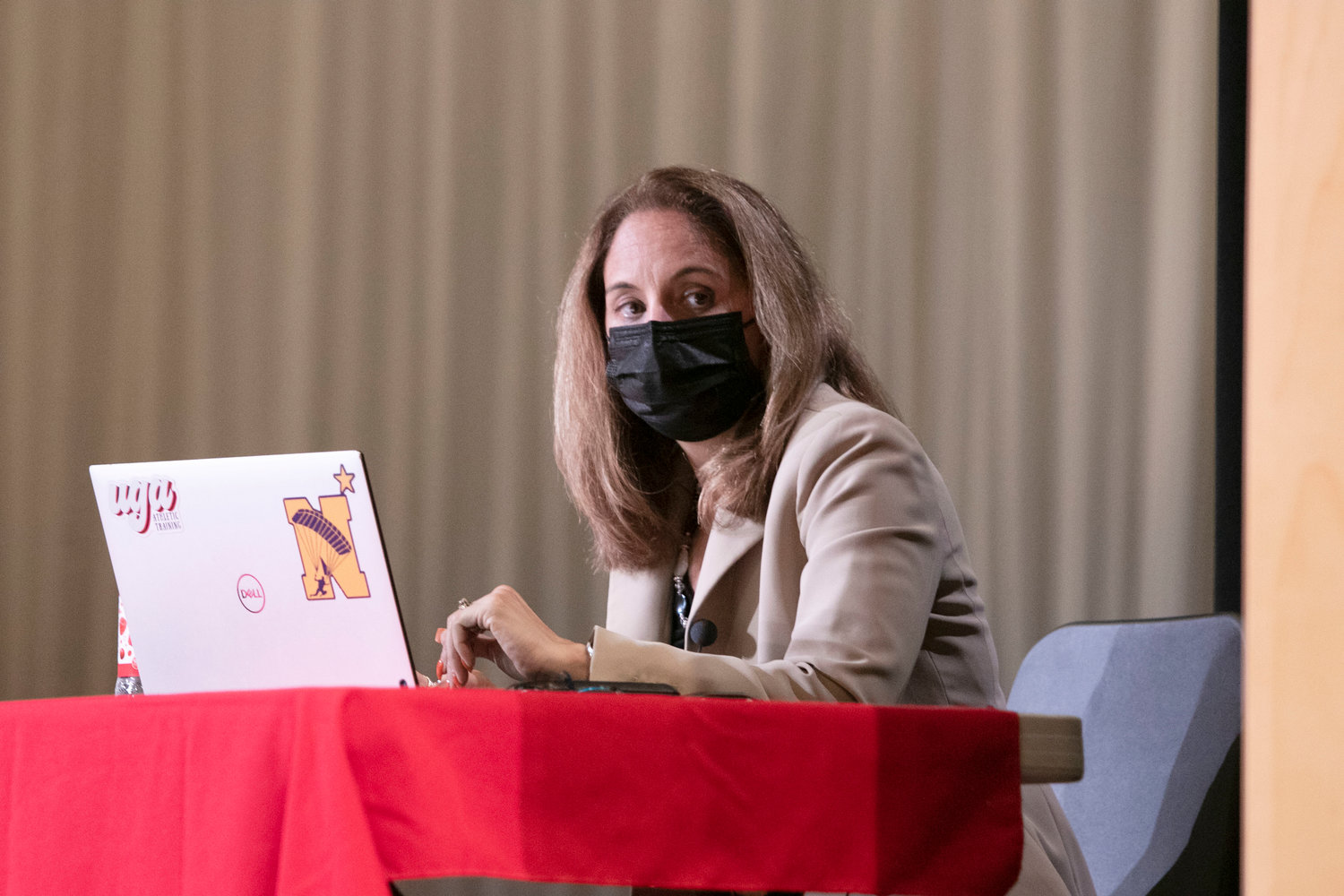 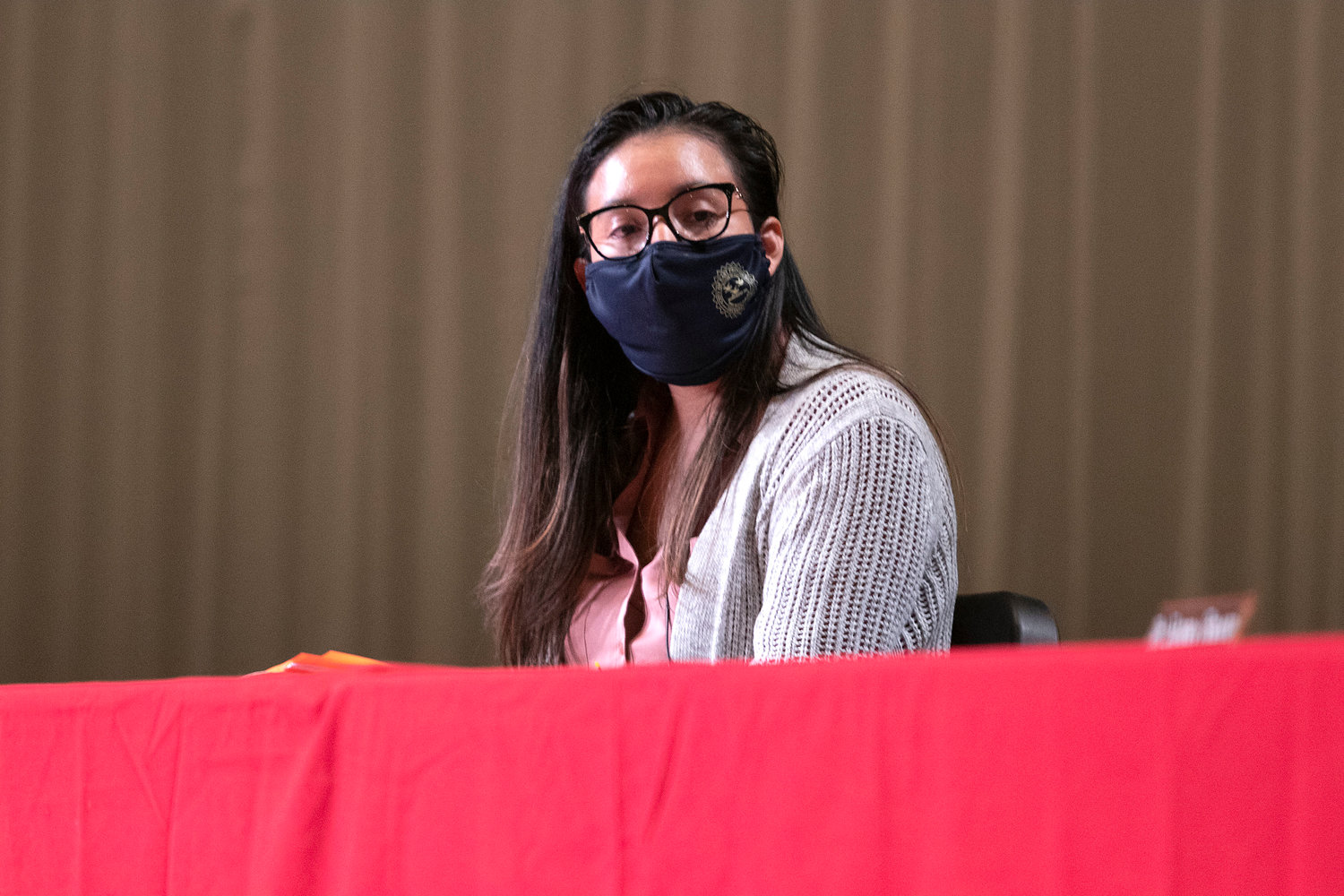 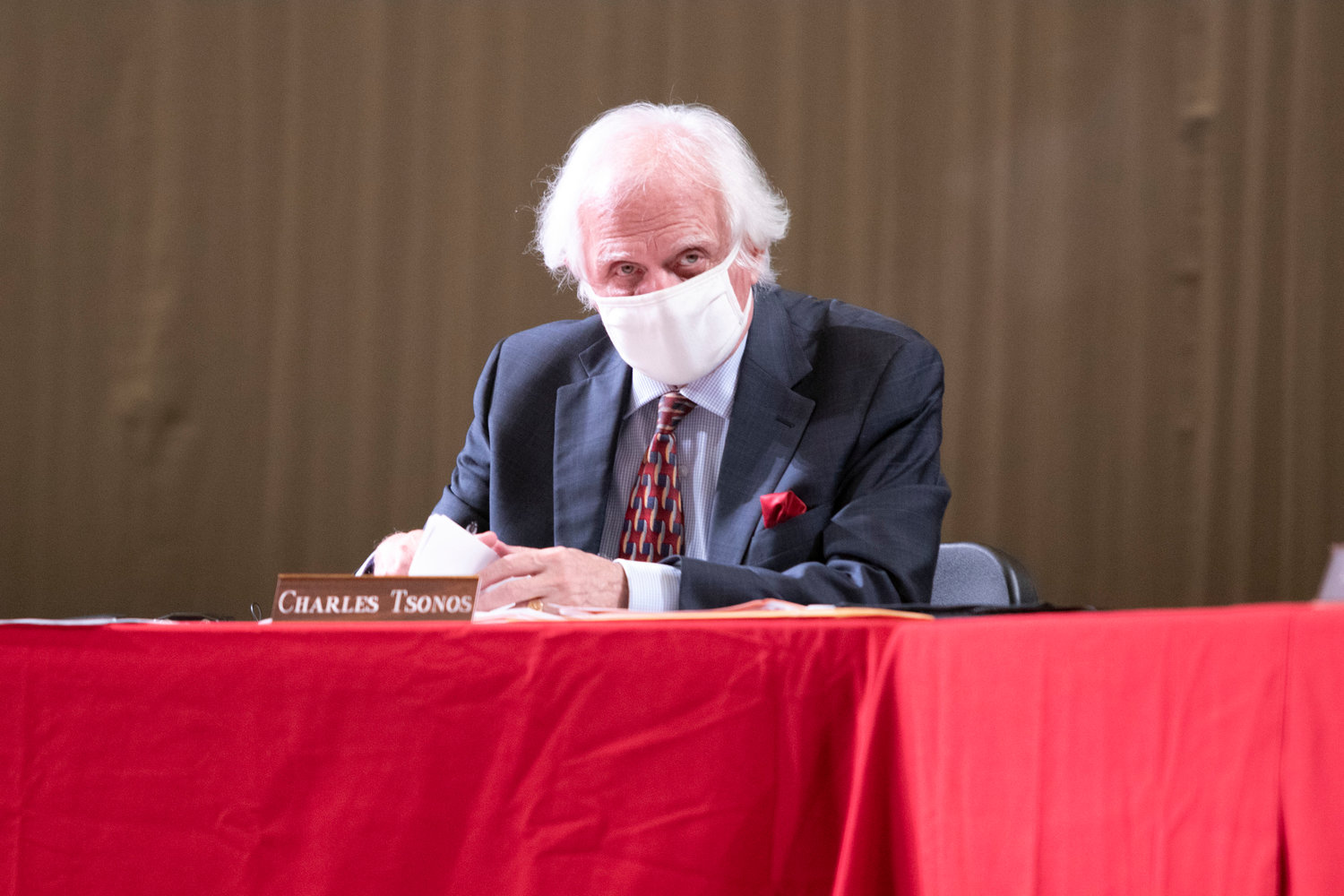 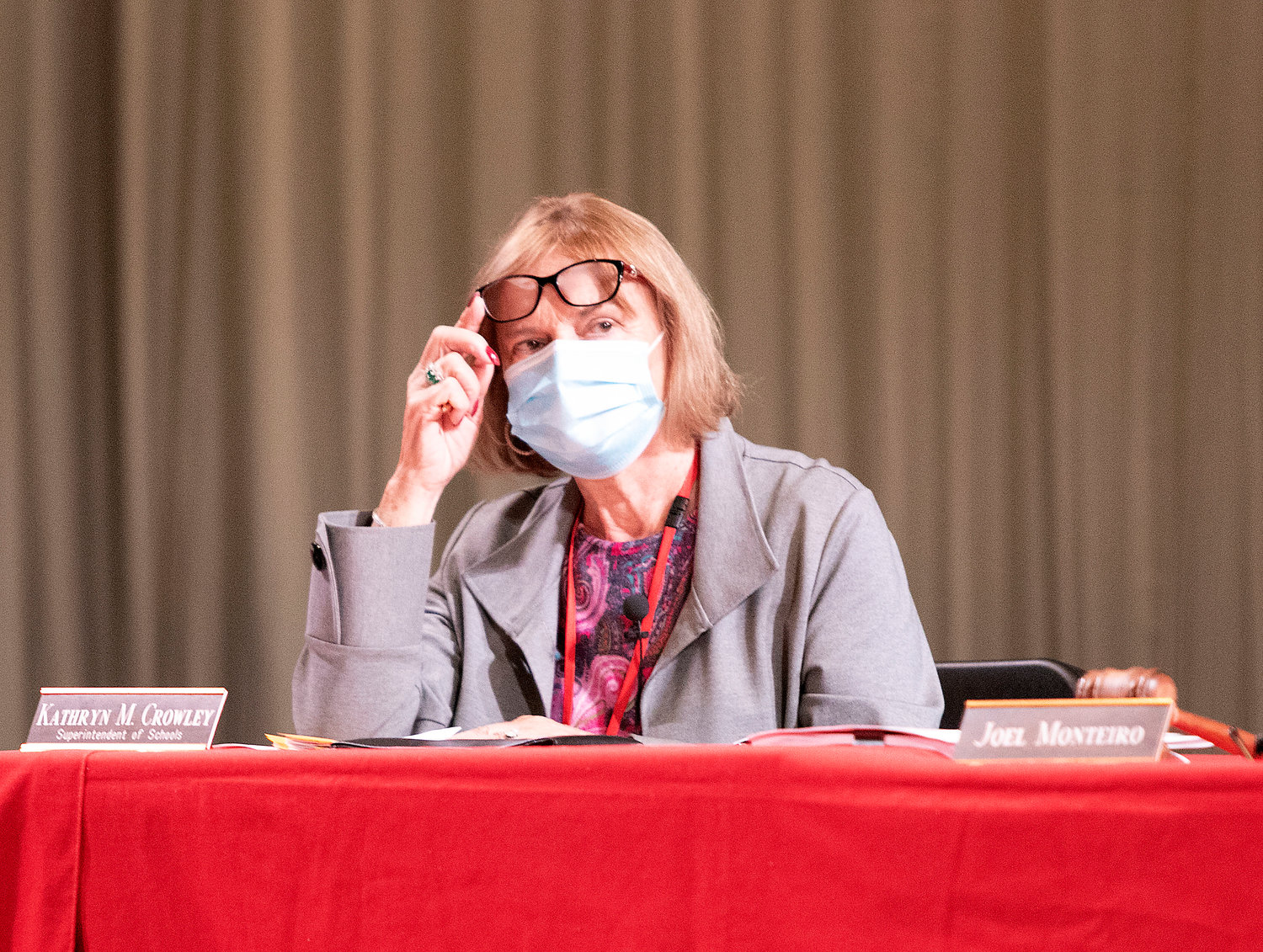 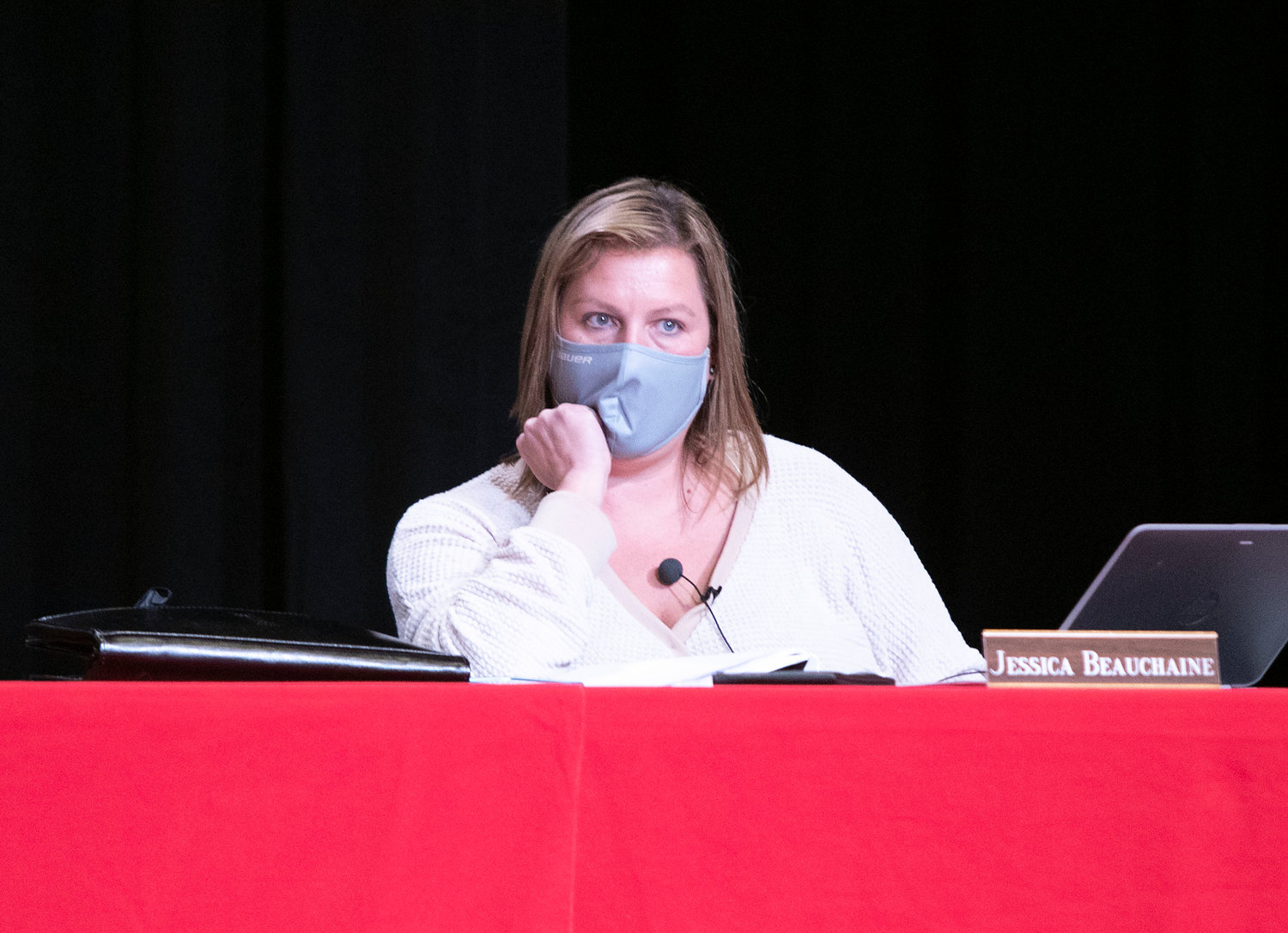 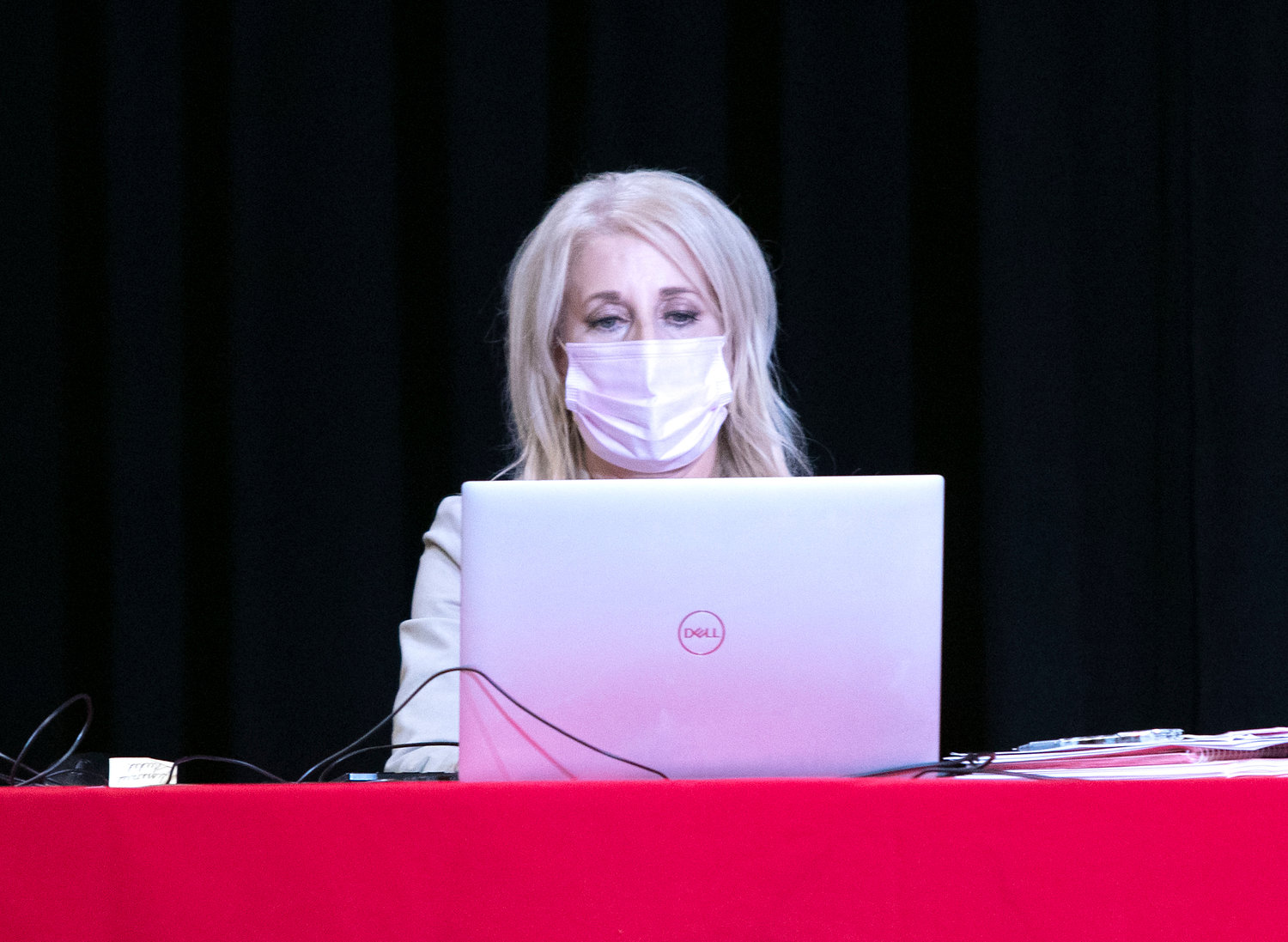 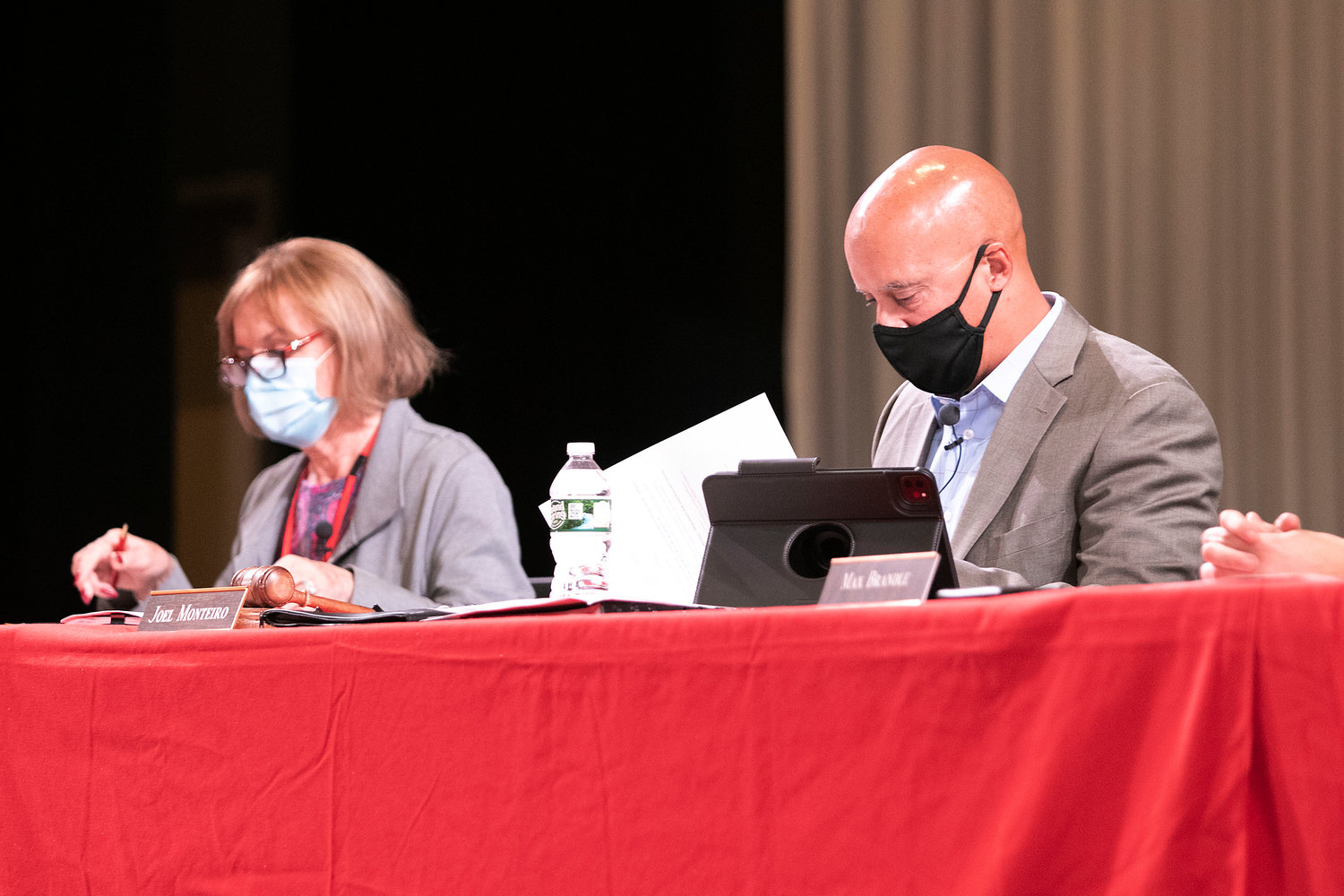 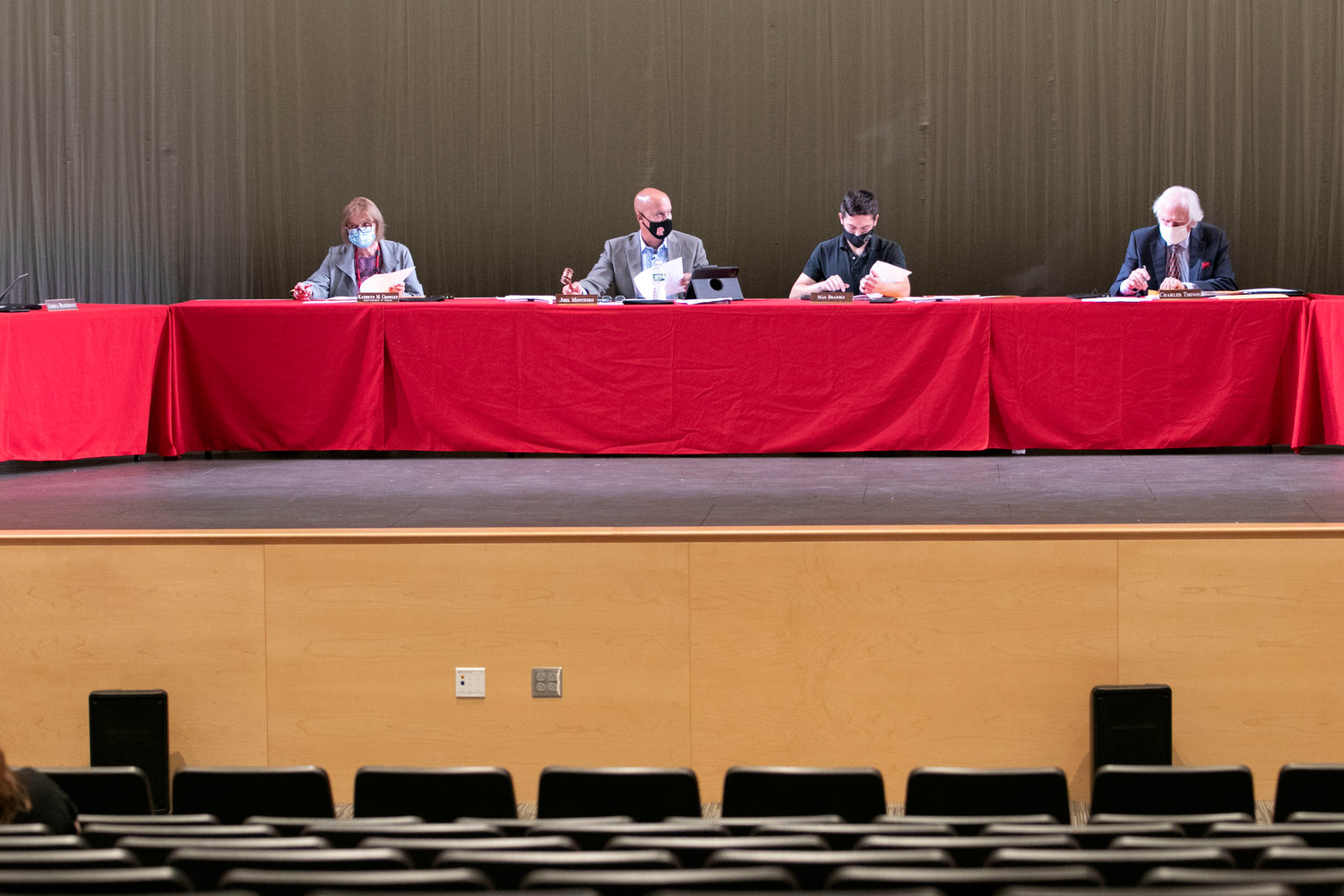 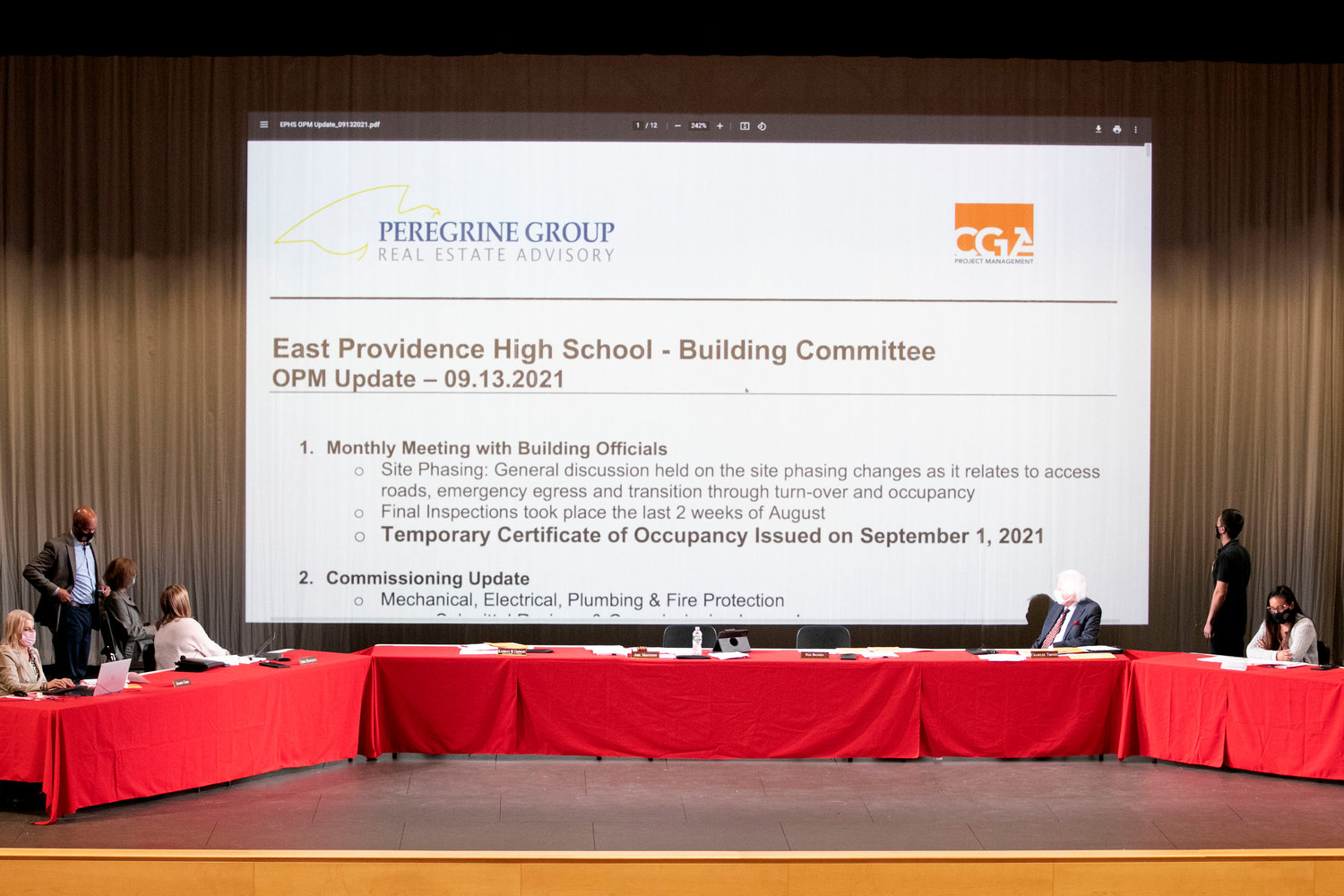 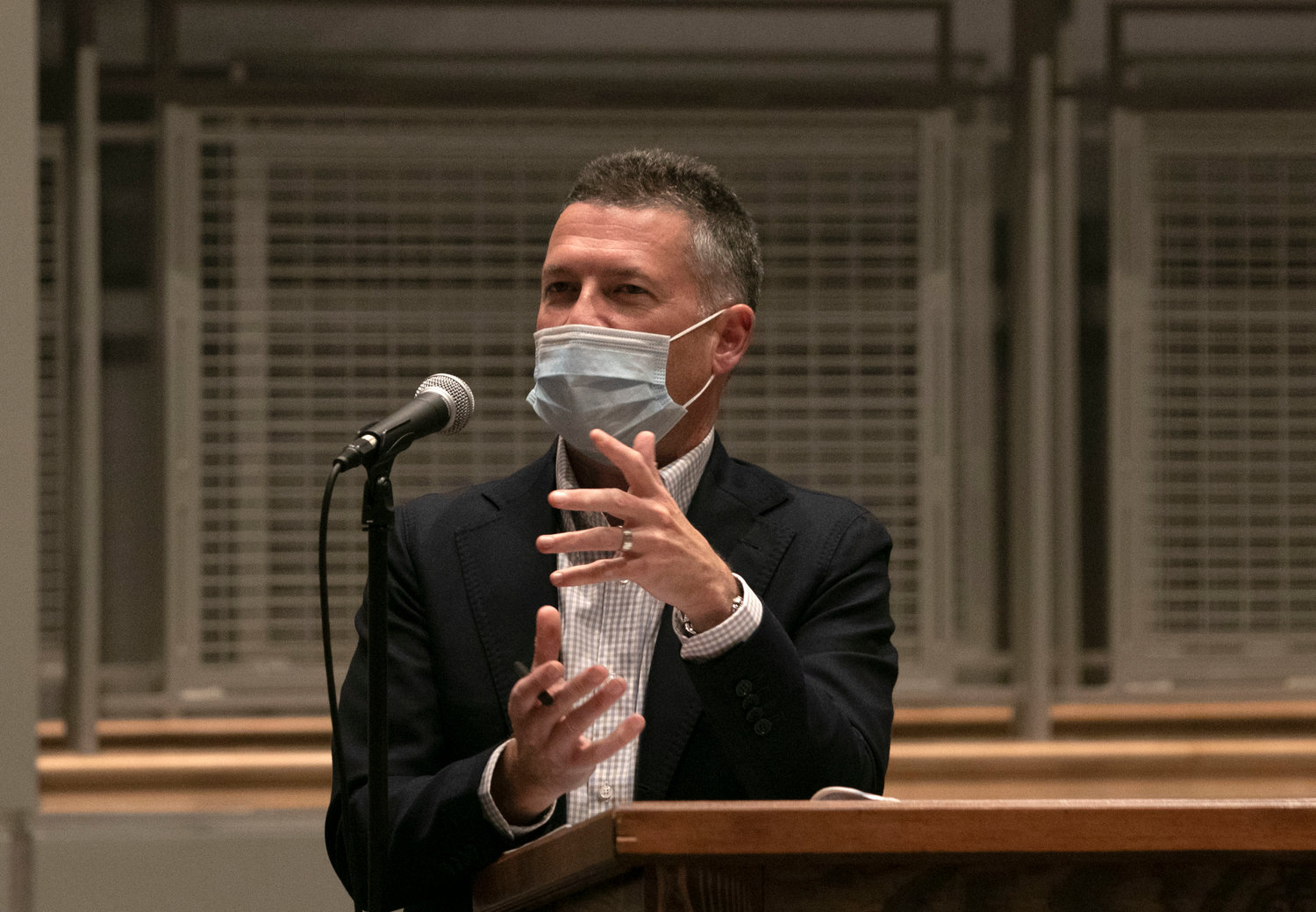 Sam Bradner, of the Peregrine Group representing the district as its owner project manager, talks about the new EPHS effort at the October 12 School Committee meeting.
Photos by Rich Dionne 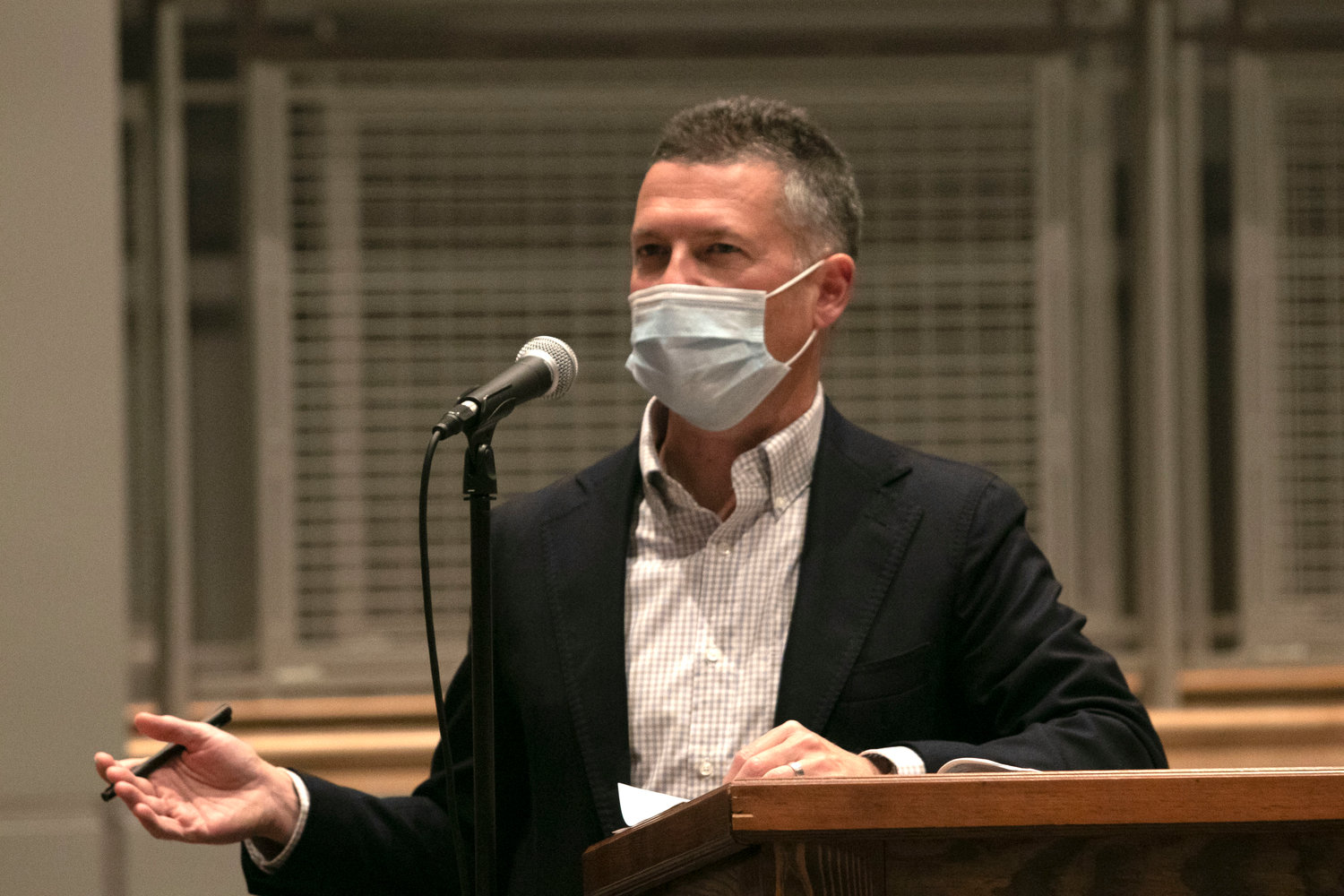 EAST PROVIDENCE — The $189.5 million new East Providence High School project as a whole has surpassed the 85 percent complete mark and remains on time and under budget.

Sam Bradner, of the Peregrine Group representing the district as its owner project manager, provided the School Committee with an update on the effort at a meeting of the body inside the new auditorium Tuesday night, Oct. 12.

Bradner, as he did the previous evening for the new EPHS Building Committee at its monthly meeting, ticked off a list of ongoing matters being addressed by lead contractor Gilbane as the building opened for the 2021-22 term last month.

The structure received a temporary certificate of occupancy so classes could commence in September. He said the expectation is to have a completed certificate by the end of October, though it not uncommon for a project of this scale to have process take up to 60 or 90 days.

Bradner said the contractors are addressing any concerns raised by building inspectors while Gilbane employees and subcontractors work “second shift” after school hours completing punch list items. He stressed the ongoing finish work was anticipated prior to the school opening.

With that in mind, Bradner said a running log of any issues with the building is being kept by the EPHS administration and staff and those things are being remedied regularly.

Old EPHS demo
The demolition of old high school building, Bradner continued, is quickly coming to an end. Gilbane noted abatement ended the first full week of the October, which was well ahead of schedule.

As the old school is toppled, Bradner said the start some of construction on the athletic fields to be located at the front of the property has already started with the building of retaining walls along with footings and foundations for dugouts and lights.

Work will continue as weather permits through the end of the calendar year, Bradner added, when it will likely enter into a temporary holding pattern over the winter then pick up again in the spring with intention to be completed for the start of the 2022-23 term

Budget matters
Bradner said the project overall continues to trend under the initial $189.5 million price tag, allowing for items considered, but not originally included in the budget, to be added.

Some of those that were “on the outside looking in” have already been accounted for, like the lights on the new tennis courts.

“Even with those things added, we still believe the project is likely to come in under budget, which is always a great thing to share with the owner,” Bradner said. “We want to make sure you get everything you want to put into the project, but also demonstrate the fiscal responsibility to both yourselves and the community as we close out the project over the next year.”

Joel Monteiro, School Committee chair and co-chair of the new EPHS Building Committee, interjected, “We are starting to discuss even more items that were identified as potentials to bring back. I’ll leave it at that because obviously there’s a lot of vetting and discussion, but we’re in a good place with that.”

Bradner attempted to assuage any concerns from officials or members of the public, who may think the additions could negatively impact the budget.

“We give the same level of scrutiny to those adds the same way we did when we were first approving this budget,” Bradner explained. “So we certainly don’t take our foot off the pedal on behalf of the committee and community when it comes to evaluating and insuring that the pricing makes sense. That it makes sense to the owner from a use or operational standpoint before we advance those things.

“We want to maintain that same level of discipline whether it’s Day 1 or Day 500 of the overall project.”

Clock tower
Monteiro briefly reviewed the process of determining how the Building Committee approached dealing with the landmark clock tower, which will be replaced with a replica on the new EPHS grounds.

He noted the Building Committee considered maintaining the old one, then possibly refacing it to match the exterior of the new structure. Neither option made fiscal sense or was feasible.

Monteiro said as demolition of the tower a couple weeks back showed, it was wobbly and easily tipped.

“It didn’t take much for it to go and it kind of speaks to, and no offense to those that built, but I think a good decision was made,” Monteiro added.

The new tower will be at level grade on the main boulevard coming into the building and will be prominently displayed on the landscaped center strip.

Time capsule
Monteiro and District Facilities Director Tony Feola opened the old EPHS time capsule, which was discovered by happenstance as demo of the building began in the summer.

It was inside the corner stone at the front entrance of the old building below Pawtucket Avenue.

Monteiro called the motto “pretty fitting,” considering that was also how the Building Committee viewed the new EPHS.

He added, a new time capsule to be placed somewhere on campus is under consideration and if something can be salvaged from the old one it will also be placed in the modern version.

Future meetings
Lastly of note, Monteiro said all future School Committees meetings will be held in the new high school auditorium instead of at City Hall.