An unusual campaign season finally comes to an end

An unusual campaign season finally comes to an end 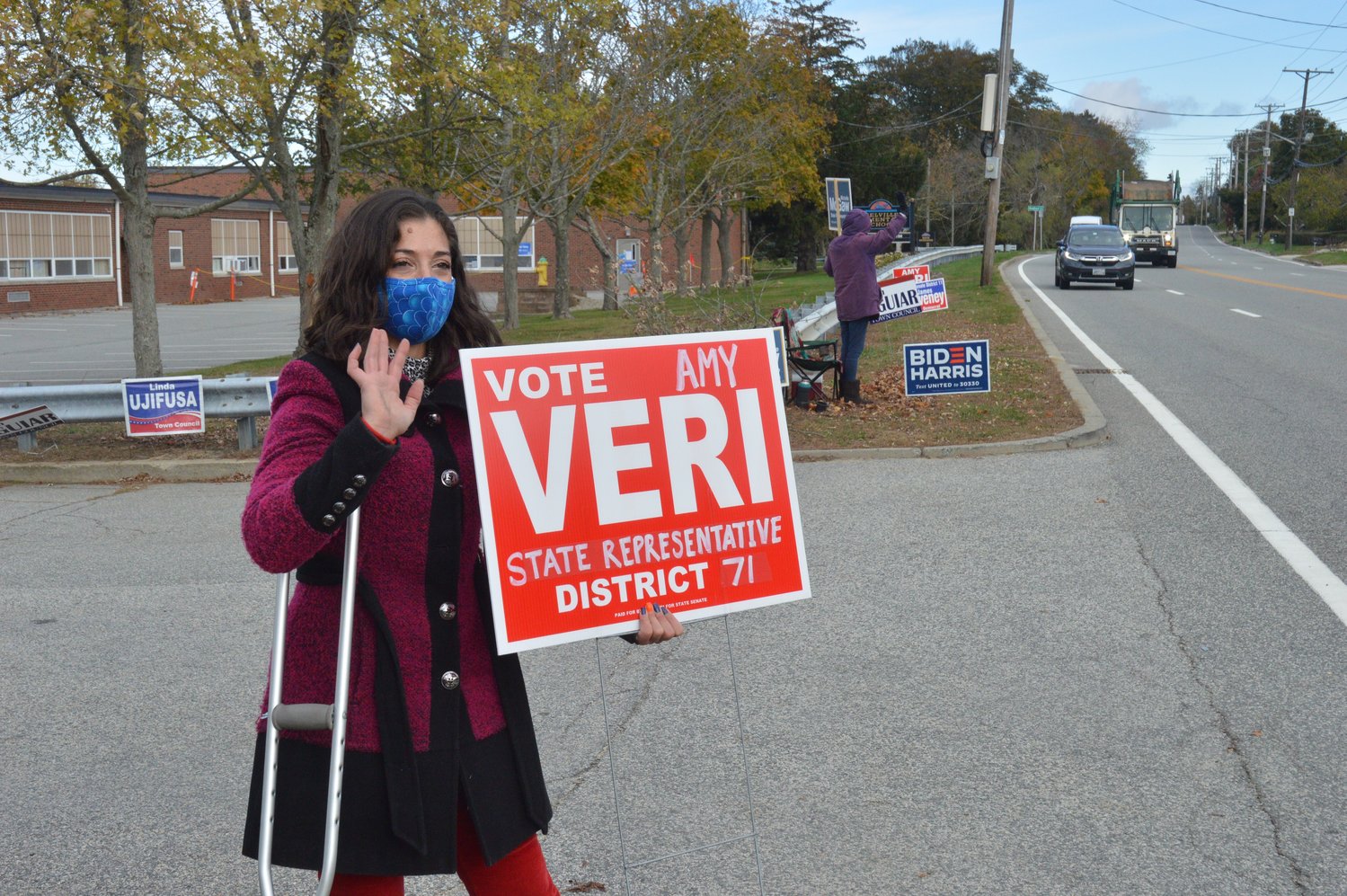 Amy Veri, a Republican candidate for District 71 in the R.I. House of Representatives, waves to motorists in front of Melville Elementary School in Portsmouth, one of the town's polling places. 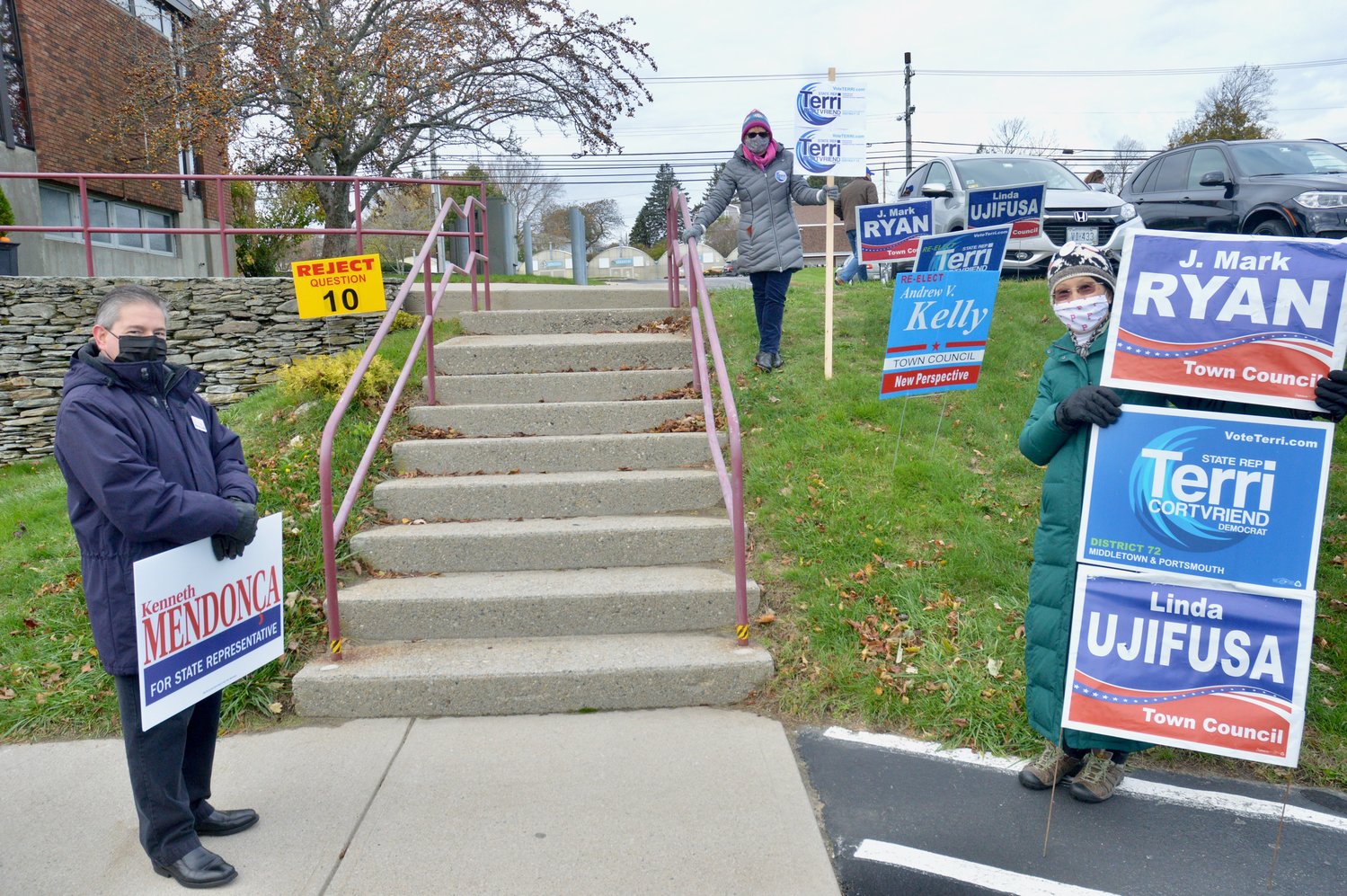 Three candidates were outside St. Barnabas Church in Portsmouth on Tuesday morning, asking voters for their support. They were (from left) Kennet Mendonca, a Republican running to re-claim his District 72 seat in the House of Representatives; Rep. Terry Cortvriend, his incumbent, Democratic opponent; and Linda Ujifusa, who’s running for another term on the Portsmouth Town Council.
JIm McGaw 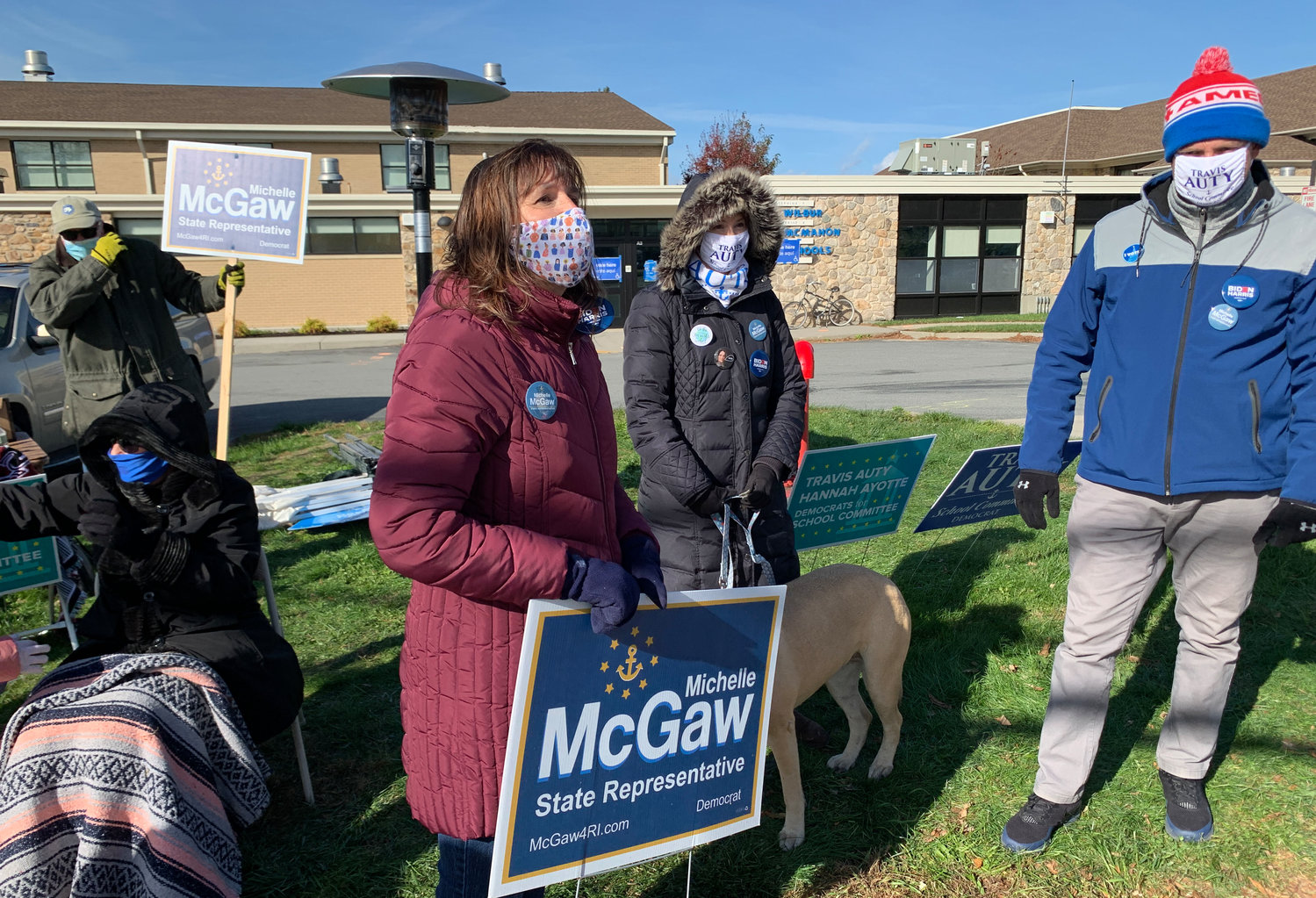 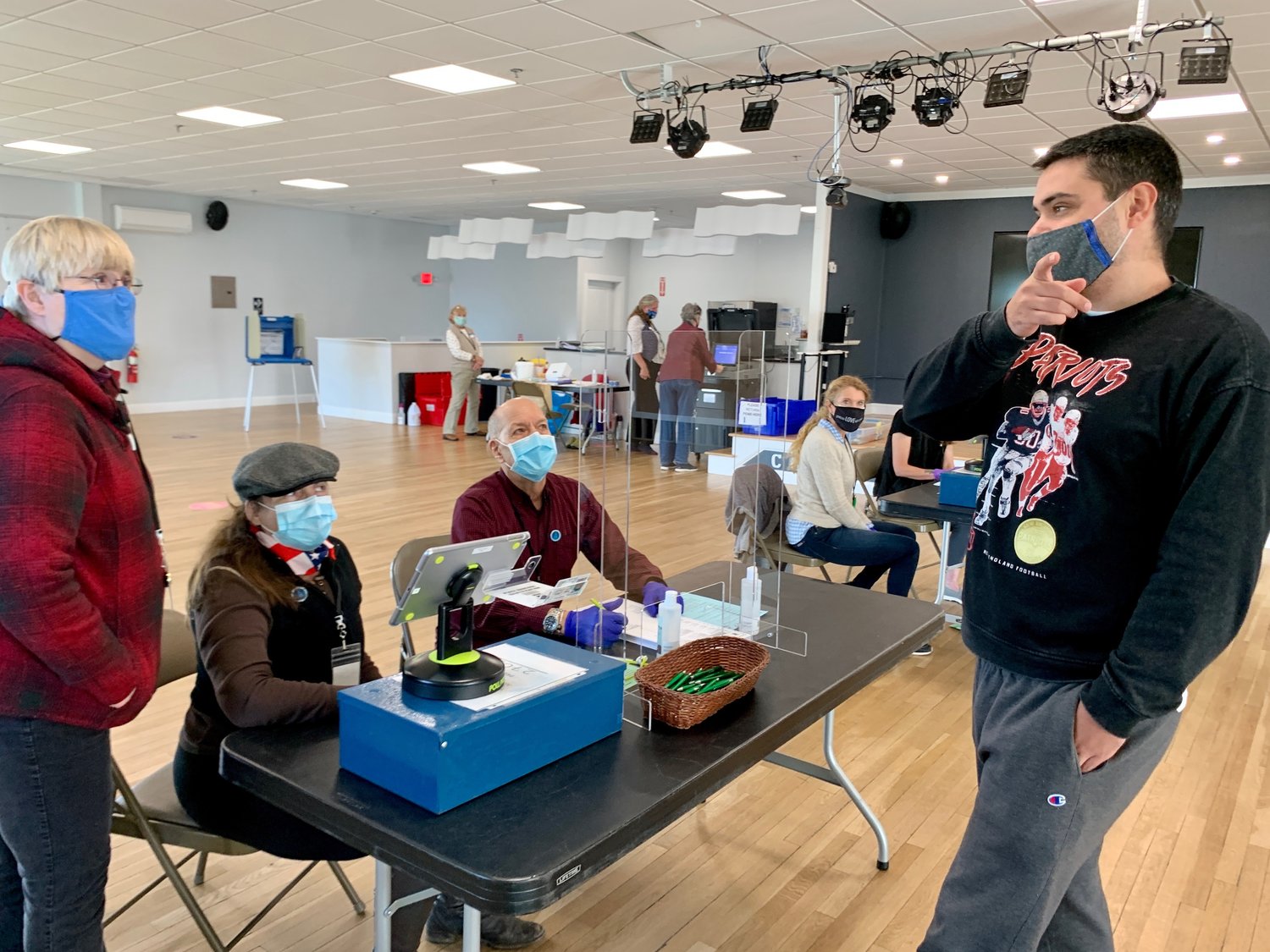 Election officials Elen Vadney (left) Debra Cardoza, and Gerry Kempen, working at CFP Arts, Wellness, and Community Center in Common Fence Point, help voter Ross Harrington after learning he was at the wrong polling place. He was deemed a provisional voter since he had just recently moved to Portsmouth.
RICHARD W. DIONNE, JR. 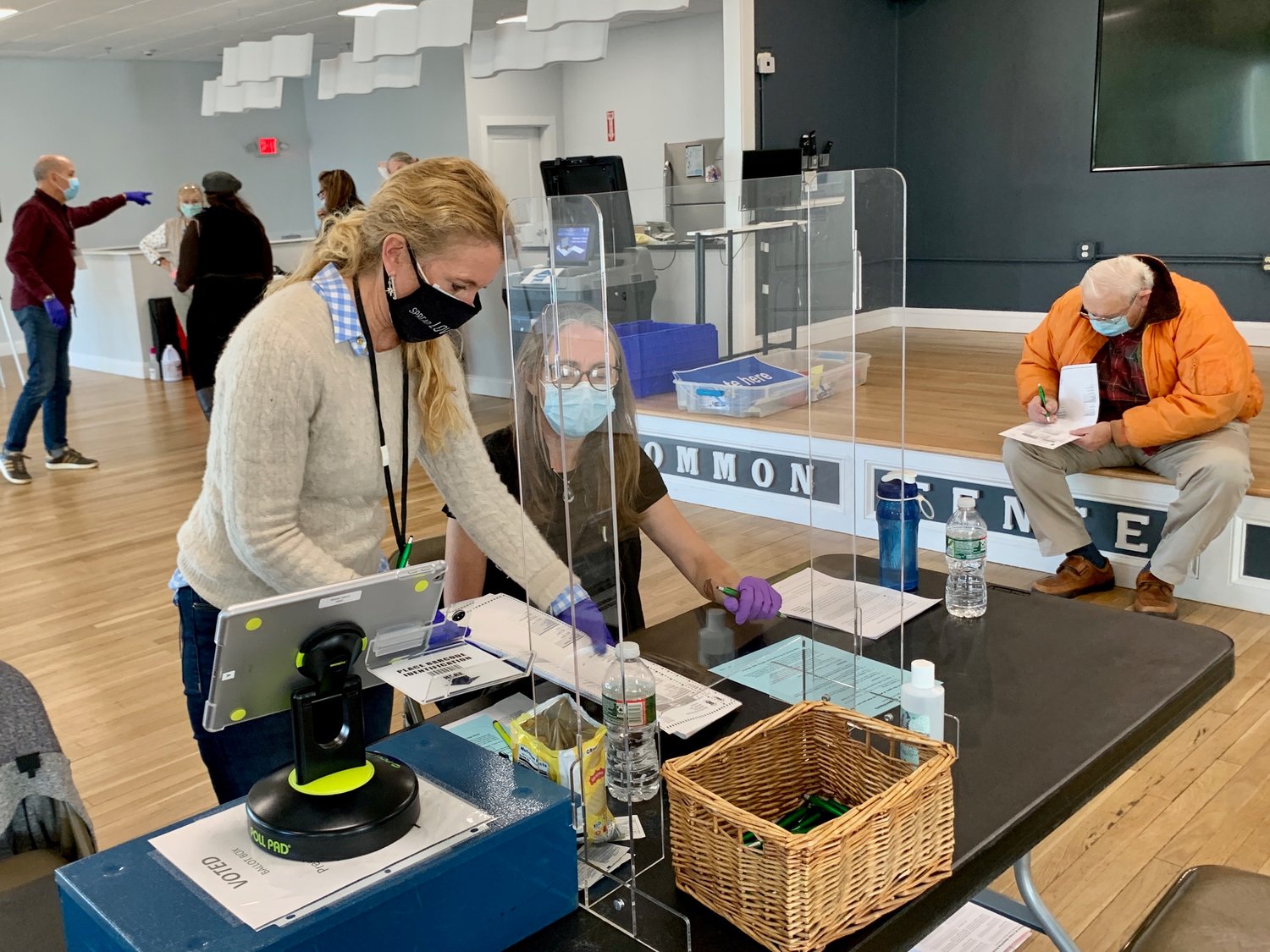 Portsmouth election officials Robyn Earley (left) and Christa Albrecht-Vegas tidy up their voter registration station at the CFP Arts, Wellness, and Community Center in Common Fence Point, one of the town’s polling sites. The man at right is filling out his ballot.
Richard W. Dionne, Jr. 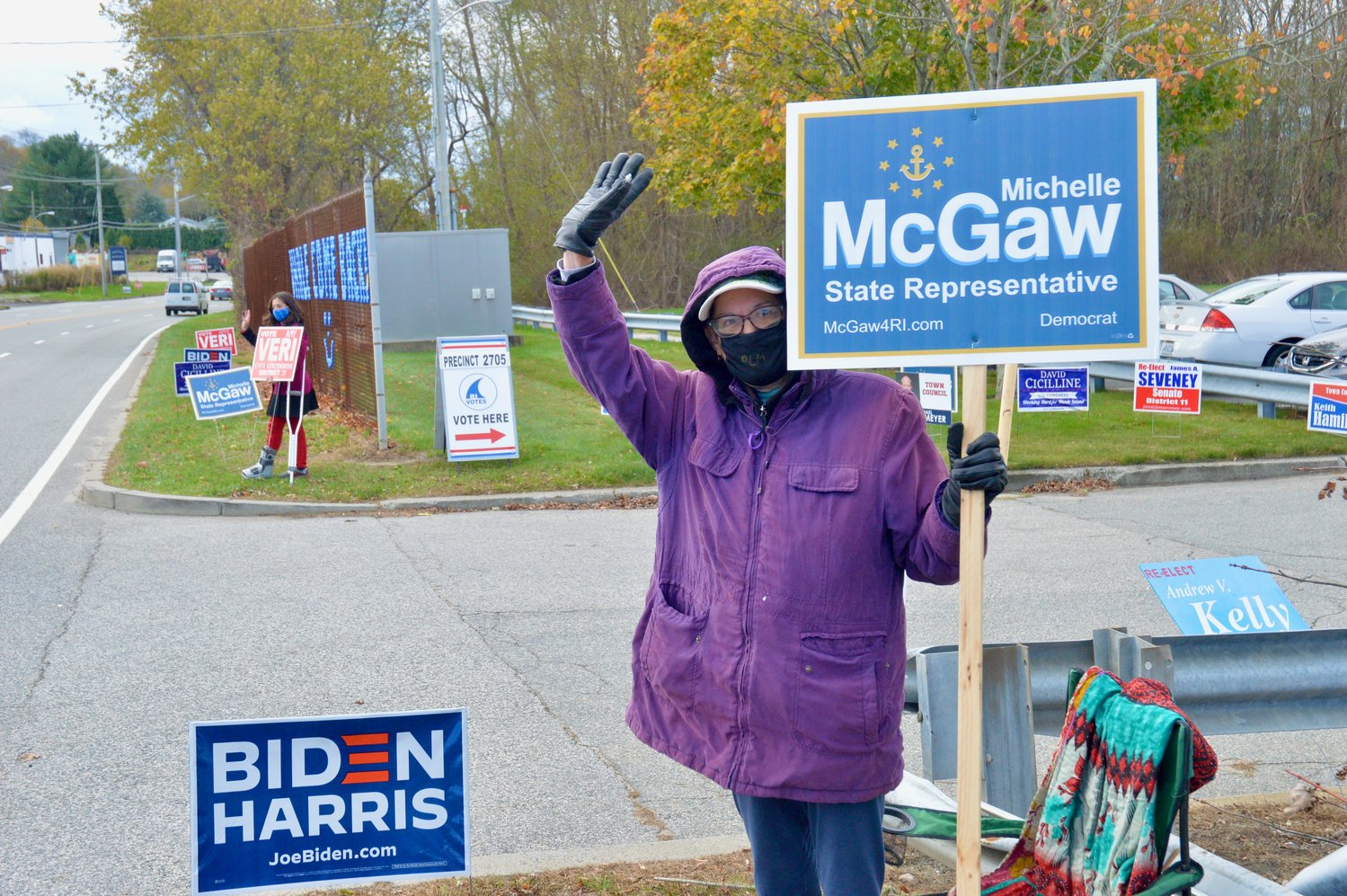 PORTSMOUTH — As if a pandemic weren’t enough, Amy Veri also had a bum leg to deal with.

Although she was hobbled several weeks ago after tearing some ligaments, Ms. Veri wasn’t about to stay on the sidelines for Election Day Tuesday.

The Republican candidate from Little Compton, who is challenging two others for the District 71 seat in the R.I. House of Representatives, was outside Melville Elementary School on busy West Main Road in Portsmouth Tuesday morning, holding up her sign and waving to motorists while teetering on a crutch supporting her right side.

She and other candidates out stumping Tuesday seemed relieved this strange election season was finally coming to an close.

“It’s been different,” Ms. Veri said of campaigning during a pandemic. “It requires a lot of creativity, but it’s always fun to get out there and meet the people.”

“People have been very welcoming, which is nice because I know there are a lot of concerns about Covid.”

She’s glad the campaigning's over — both at the local and national level. “I just hope that whatever the result, it’s very peaceful,” Ms. Veri said.

St. Barnabas Church Parish Hall was one of the busier polling sites in Portsmouth since not one but two precincts are casting ballots there: 2706 and 2707.

Three candidates were holding campaign signs while congregating around the set of steps leading from the parking lot: Rep. Terri Cortvriend (D) and Kenneth Mendonca (R), who are competing for the District 72 House seat; and Town Council Vice President Linda Ujifusa, who’s seeking another term on the council.

They said voter turnout was strong earlier in the morning — while snow fell around them — but had since tapered off a bit. Yes, they all agreed: It  has been a most unusual election year.

Added Mr. Mendonca, “It certainly has been a little different, without a doubt, and I think the early voting capability is a game-changer. Because so many people have already voted, if you didn’t get your message out a couple of weeks ago, you’ve lost that opportunity. You had to be ahead of the game. But we’re all working; it’s the same platform for all of us, so we’re all trying our best to get our message out to the voters.”

Ms. Ujifusa had her hands full with three signs — one for her; one for her husband, J. Mark Ryan, who’s also running for a second council term; and one for Rep. Cortvriend.

“It’s been really hard because we like to talk to people face to face, and not being able to do that has been a bummer,” she said, adding she’s glad it’s over.

“We’re very excited and are very hopeful that good things will result.”

According to the R.I. Secretary of State’s Office, as of late Tuesday afternoon nearly 2,000 Portsmouth voters had cast ballots that day. When you add in the number of mail ballot voters (3,998) and early voters (3,799), that puts the total turnout so far at 9,787, representing a 65 percent turnout.

The total turnout around the state was just over 56 percent (454,159 votes), which includes 140,353 Election Day voters, 164,263 mail ballot voters and 149,546 early voters. With ballots still to be cast and counted, that figure already makes up 97 percent of the 2016 General Election turnout in Rhode Island.

The race is on for the District 71 House seat

More than 10,000 votes have already been cast in Rhode Island