In August of 2019, then-Gov. Gina Raimondo declared Rhode Island a Purple Heart State, joining 44 other states and the territory of Guam. Last week, a proclamation made by Councilman Aaron Ley, … 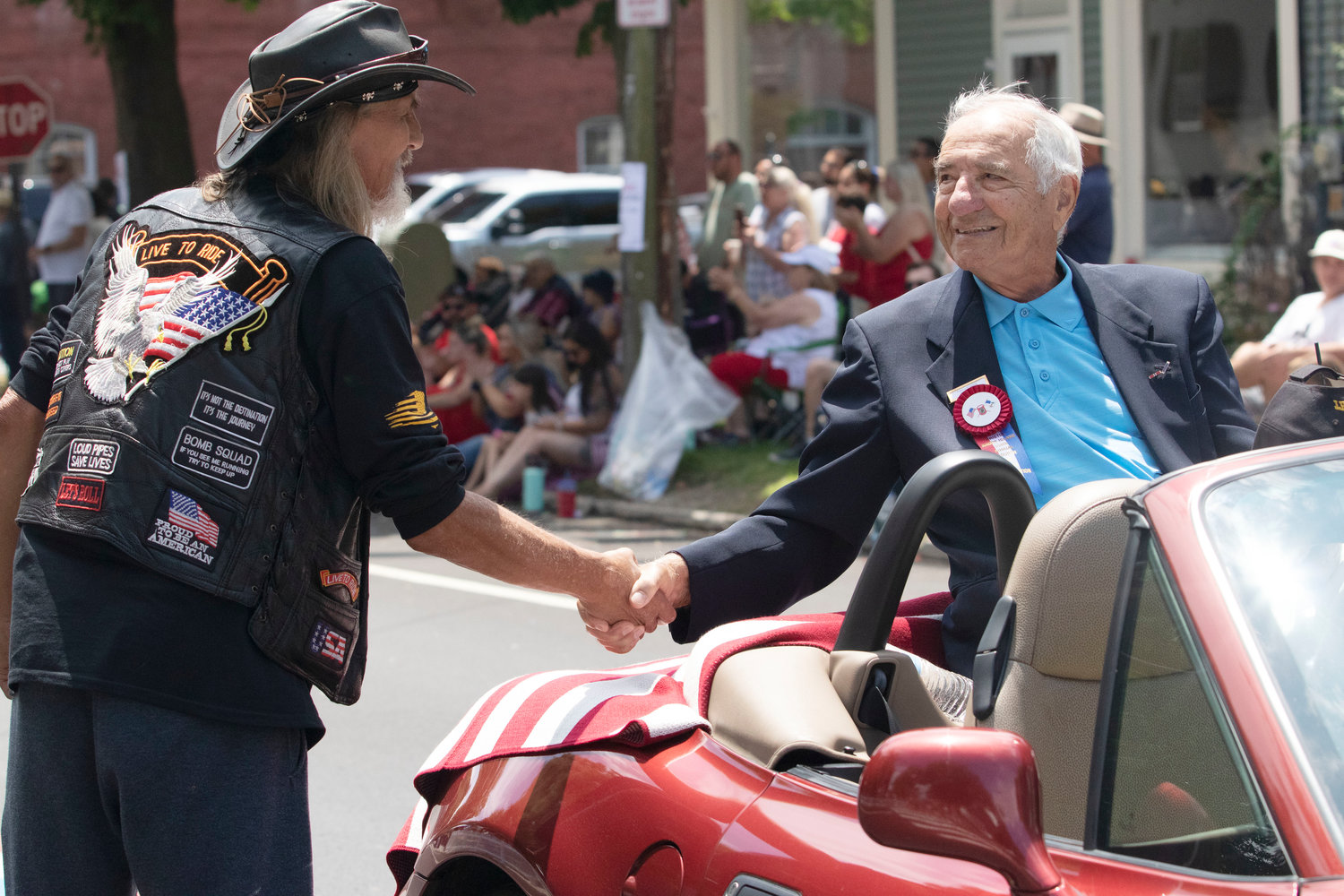 Purple Heart recipient Arthur Medeiros greets admirers during the 2021 Bristol Fourth of July Parade. Medeiros was thrice awarded the Purple Heart for injuries received in World War II, including at the Battle of the Bulge, as well as a Silver Star and a Bronze Star for his valor. The Bristol Veterans Council and VFW Post 237 are seeking Bristol’s Purple Heart recipients for recognition, following the Town Council’s proclamation declaring Bristol a Purple Heart Town.
Posted Thursday, August 11, 2022 6:00 am
By Christy Nadalin

In August of 2019, then-Gov. Gina Raimondo declared Rhode Island a Purple Heart State, joining 44 other states and the territory of Guam. Last week, a proclamation made by Councilman Aaron Ley, naming Bristol a Purple Heart Town, was unanimously approved at the Aug. 3 council meeting. Bristol now joins East Greenwich, North Kingstown, South Kingstown, Narragansett, Charlestown, Westerly, Portsmouth, Middletown and Newport on the Purple Heart Trail, creating a symbolic and honorary system of roads, highways, bridges and other monuments that give tribute to the men and women who have been awarded the Purple Heart medal.

“Bristol as a Rhode Island Purple Heart Town will serve as a fitting reminder of the sacrifices made by these devoted and patriotic individuals who put themselves in harm’s way so that our way of life may continue,” said Wally Coelho, president of the Bristol Veterans Council. “These well-traveled roadways will serve as a living memorial to these brave and dedicated veterans.”

“I believe in our hearts we’ve always been a Purple Heart town,” said Ley, introducing the resolution. “We don’t need the installation of highway signs to to make that so, but what this proclamation does is that it affirms what’s always been evident, and it reminds all those entering our community that we value the sacrifices of our Purple Heart recipients.”

There have been nearly 2 million Purple Hearts awarded to service men and women injured in combat since the first one was awarded in February of 1932.

“We will need time to try to identify some of the Purple Heart recipients in Bristol, because we do not have a central registry, but we are going to try to identify them so that we can honor them at a ceremony on a date to be determined,” said Coelho. The Bristol Veterans Council and VFW Post 237, who fully supported the proclamation, are asking anyone with leads to place reach out and contact any of the following: Wally Coelho at 508/965-1557, Joe Diniz at 401/253-9866, or VFW Post 237 at 401/253-9866.

“It is our hope of seeing Purple Heart signs placed throughout all of the towns,” said Coelho. “These small tokens of gratitude will hopefully carry a world of meaning for these veterans.”