Building a beach in Tiverton

One blade of sea grass at a time, Fogland Beach's sand dunes are growing.

Building a beach in Tiverton 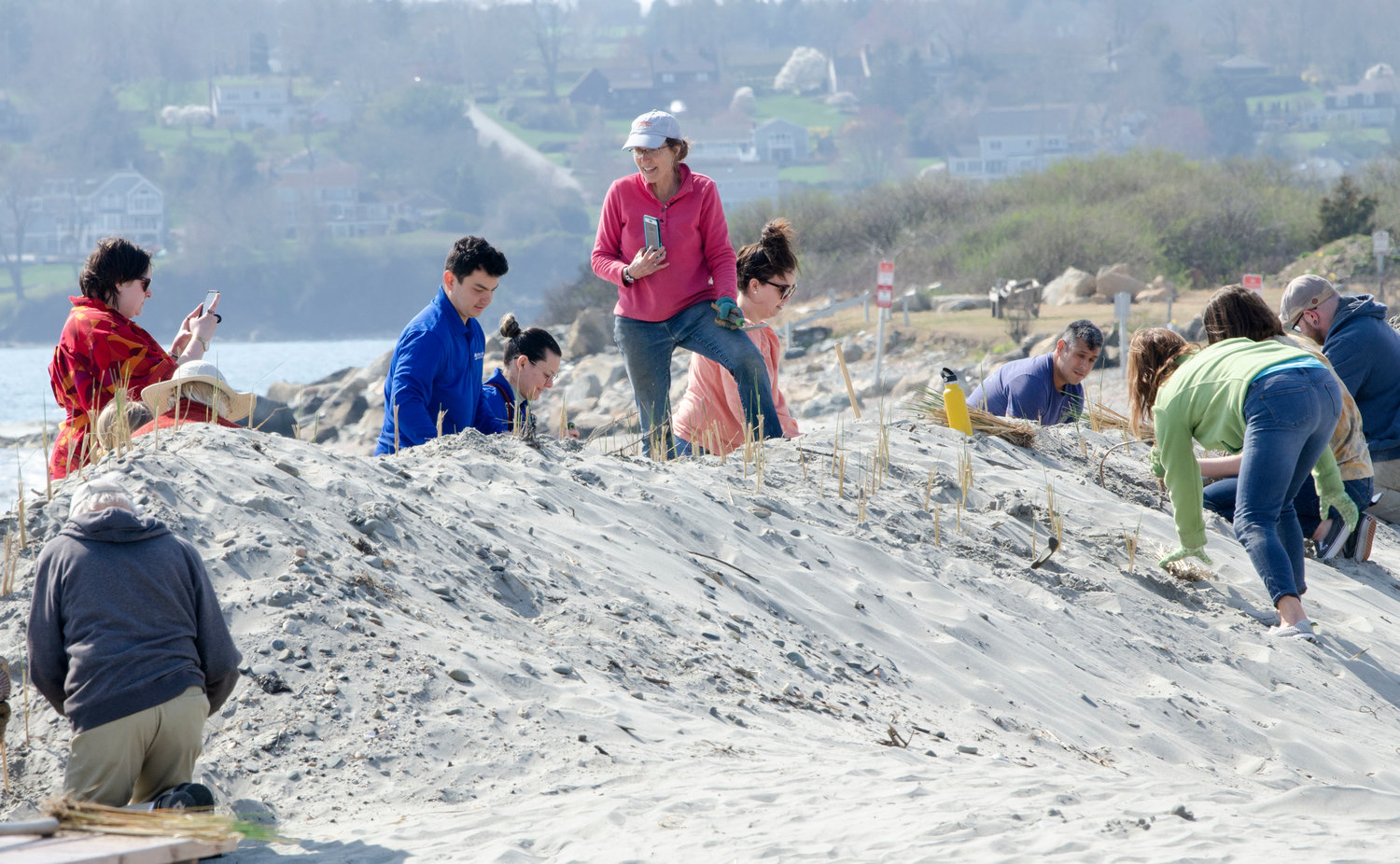 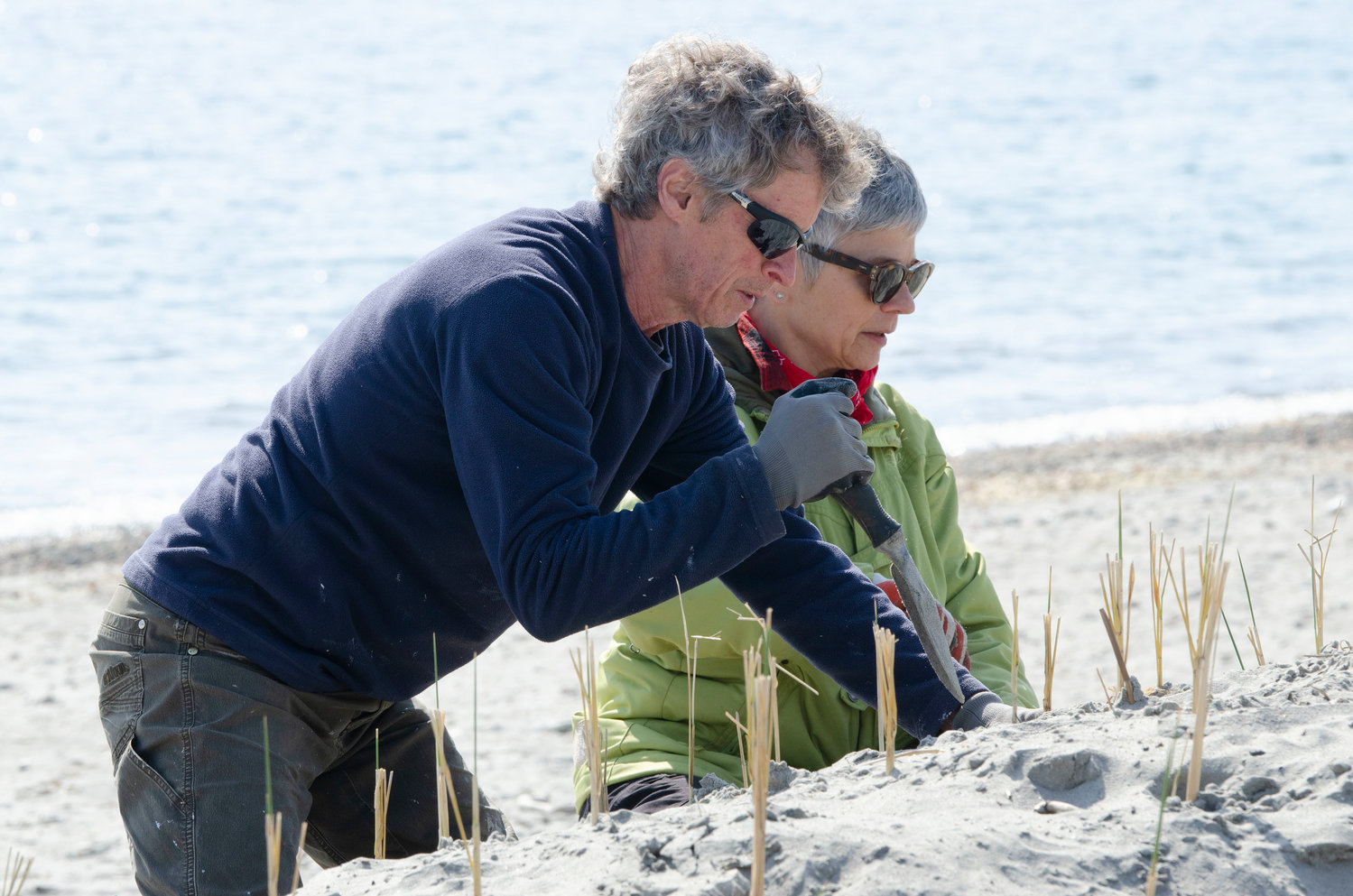 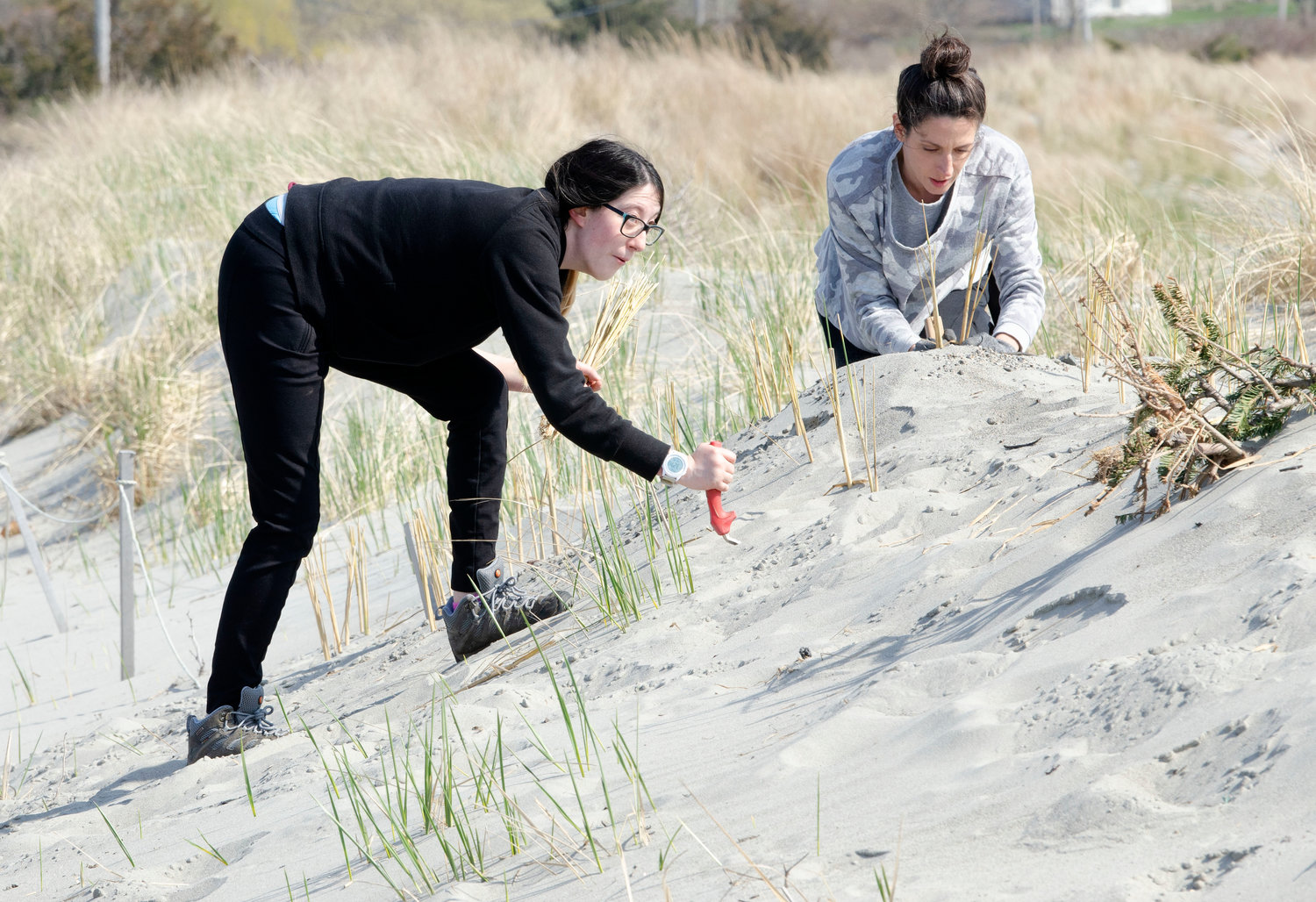 One blade of sea grass at a time, Fogland Beach's sand dunes are growing.

A group of about 30 volunteers spent a sunny afternoon last Thursday plugging native grasses into sand berms deposited on the beach by the Department of Public Works. The goal of the piles, scraped up from along sandy Three Rod Way, is to reduce erosion caused by wind, storms and sea level rise, which could otherwise strip vulnerable portions of the beach and potentially cut the far west end off from the mainland.

For years, the popular barrier beach was nearly flat, its natural dunes stripped by the steady winds that buffet it year-round. First put in about four years ago by the town's DPW, Open Space and Land Preservation Commission, Recreation Department and Save The Bay, the berms have been taking well and here and there, large clumps of established grasses are thriving.

The commission's Brian Janes said it's clear that over the three years he's been involved with the project, the efforts are working. He said the dunes appear to be preventing sand intrusion onto Three Rod Way and salt marshes to the north, which are also vulnerable.

With any luck, he said, the grasses will continue to take and over time, the dunes will grow.

As they work to reshape Fogland, town officials are looking toward a major new project that they hope will further protect the fragile areas from erosion and other impacts from the surrounding area.

Tiverton recently received a $245,000 grant from the Rhode Island Infrastructure Bank to establish a municipal resilience program in Tiverton. It is currently in the design phase and must still earn approval from the Coastal Resources Management Council, but Janes is optimistic that the work will commence after the busy summer beach season.

"Tiverton is blessed with over 10 miles of tidal shoreline along the Sakonnet River and hosts two significant salt marsh ecosystems" at Sapowet and Fogland marshes," Tiverton Town Council president Denise DeMedeiros wrote in the town's grant application. "This project addresses a number of long-standing problems associated with Fogland Beach.

Among the planned work:

Tiverton will create natural collection structures to collect and direct fresh water runoff from Fogland Road, which leads to the beginning of Three Rod Way.

In addition, the abandoned "skating pond" to the south of Three Rod Way, built in the 1960s, will be cleared of invasive phragmites stands. Those stands of invasive grasses are prime habitat for breeding mosquitoes, and the plan is to grub and regrade the area to encourage standing water to drain to the north and into the salt marsh via a trench drain across Three Rod Way.

"This drain will also capture any storm water that may still accumulate on the road," DeMedeiros wrote.

Dune building will continue. And finally, the existing ticket shack at the beach entrance, currently located in the most flood-prone section of the road, will be relocated.

The project will be carried out by the town's recreation and open space commissions, with assistance from Save The Bay and the DPW.

Though the town is required to match 25 percent of the total project cost, the "DPW will provide in-kind services wherever possible," and Save The Bay has applied to the CRMC for additional funding.

"Nearly all of the proposed interventions are nature-based solutions that utilize green infrastructure and natural processes to achieve results," DeMedeiros wrote. "All of the work will improve the area's resiliency for the future and help ameliorate the near-term effects of sea level rise."