Current and former Bristol residents found themselves in the crosshairs of last week's devastating Florida hurricane. Here are a few of their stories. 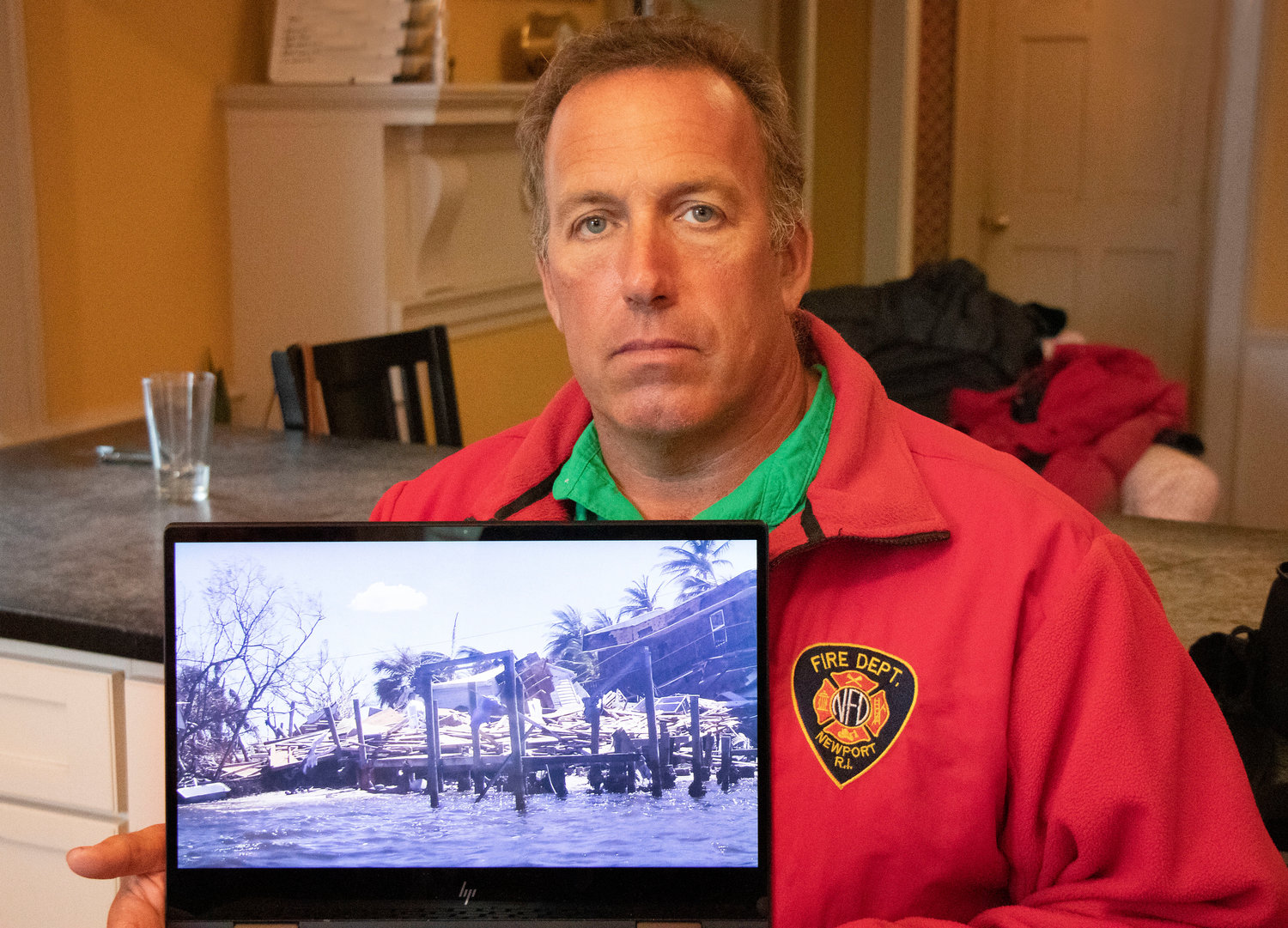 Bristol resident Stephen Knapman with one of the many images he captured over several days assessing the damage to family’s, friends’, and his own property in west Florida. This image shows destroyed properties along Pine Island Road on Matlacha, near where the road washed out, preventing access to the island.
Richard W. Dionne, Jr. 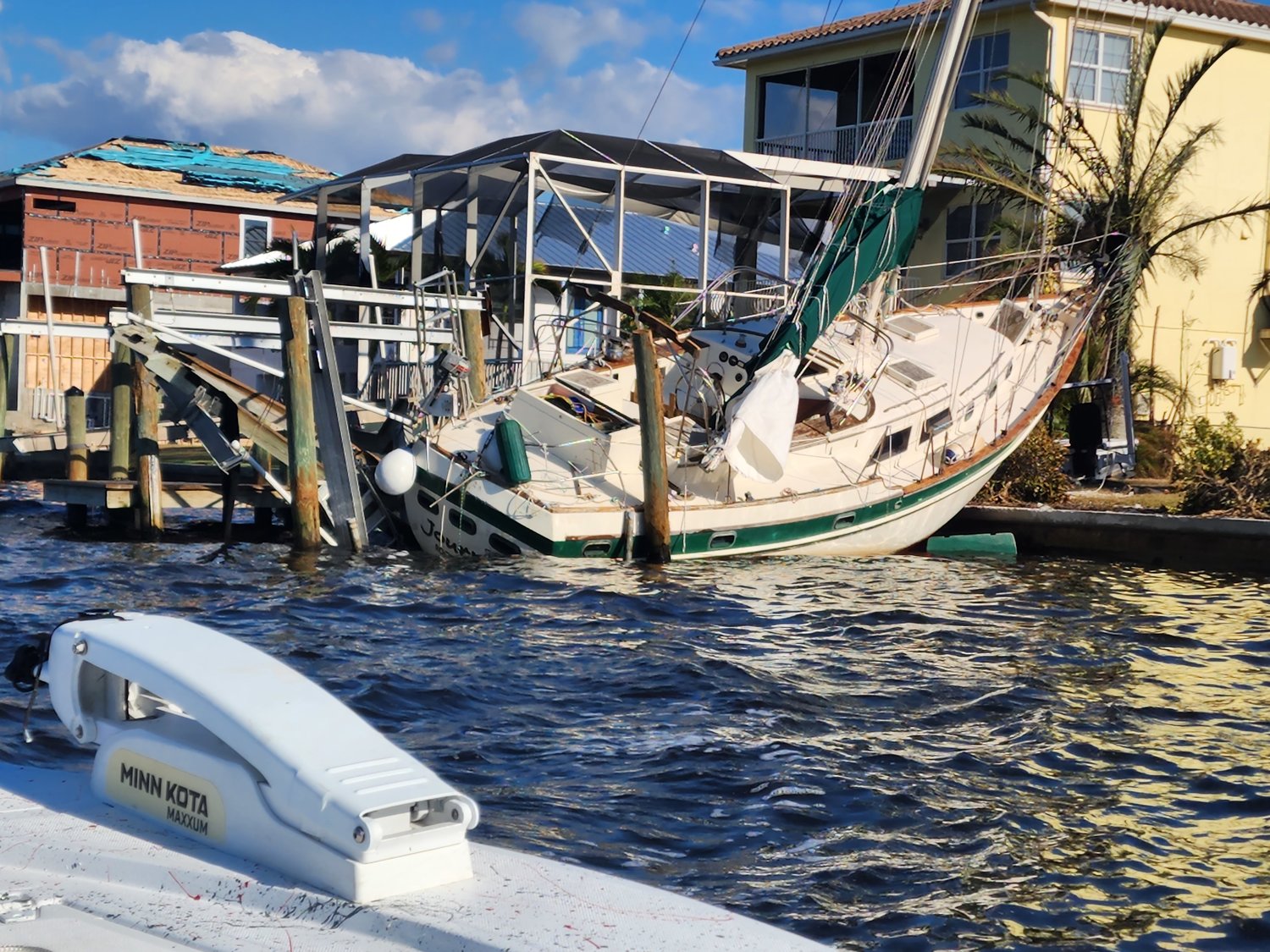 The canals surrounding Stephen Knapman's Matlacha neighborhood were full of scenes like this one, where yards remain adorned with high-and-dry vessels, many of which traveled from neighbors’ docks and boat lifts.
Stephen Knapman 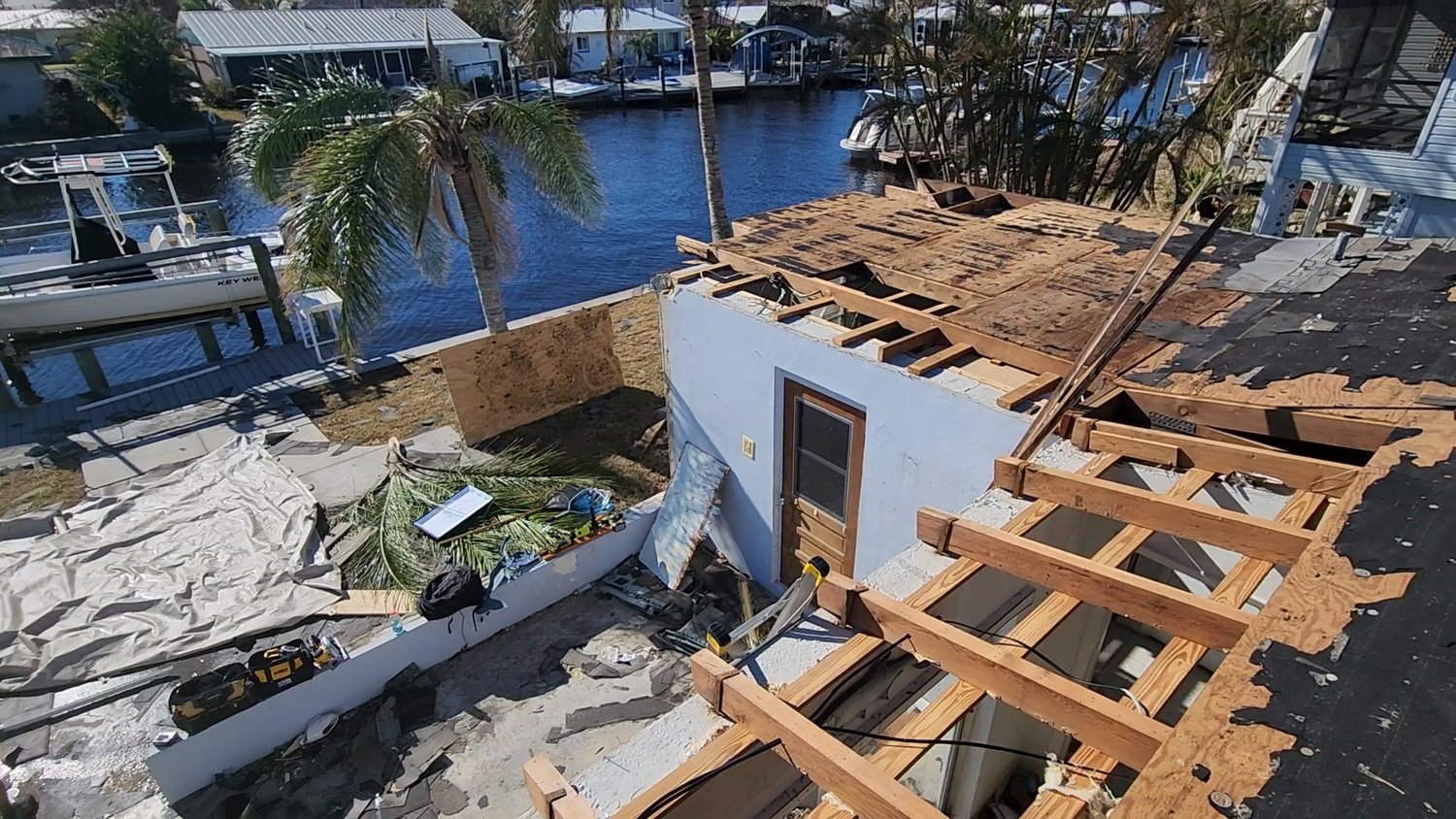 This shot, taken from the roof of Stephen Knapman’s family home in Matlacha, shows the utter destruction wrought in the aftermath of Ian. Knapman suspects the house will have to be gutted to the studs to repair the damage from the triple threat of wind, rain, and storm surge.
Stephen Knapman 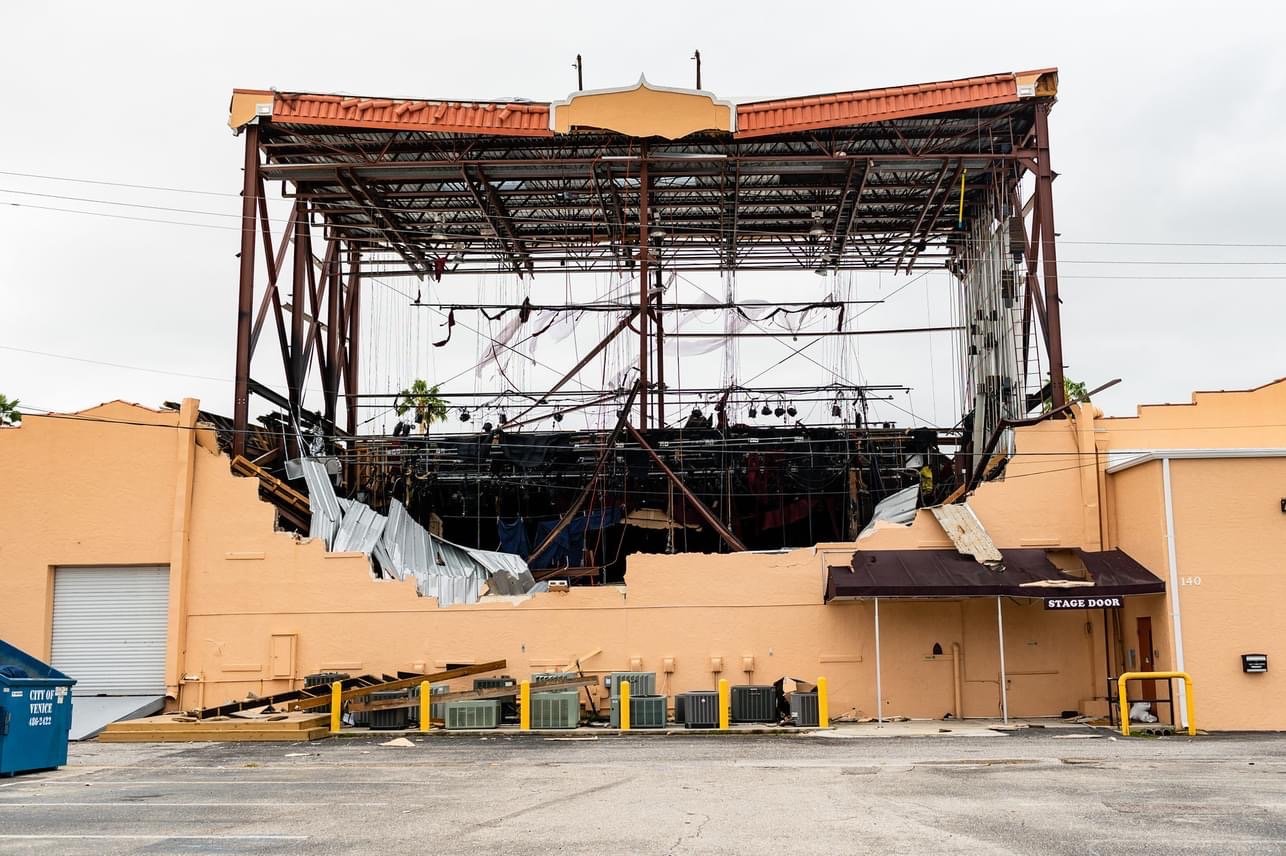 Venice Theatre, a community theater which opened in 1950 and is one of the largest and most active community theatres in the U.S. suffered heavy damage from Hurricane Ian.
Mary Ann Sousa 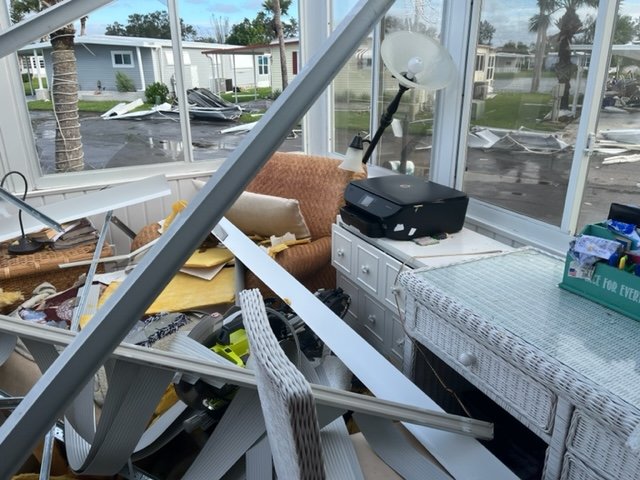 The post-Ian scene in Mary Ann Sousa’s Venice Isle home. Though she still awaits a verdict from the insurance company, she fears her home is a total loss.
Mary Ann Sousa
Previous Next
Posted Wednesday, October 5, 2022 6:00 pm
By Christy Nadalin

If there’s one thing many Bristolians love as much (more?) than Bristol, it’s getting out of here when summer’s bloom fades and things start to get brisk. In other words, now. Many of these folks have found second (or first) homes on the west coast of Florida, in the communities of Punta Gorda, Venice, and Port Charlotte — the very area that sustained the worst of what Ian, one of the strongest hurricanes in Florida’s history, had to give when it made landfall last Wednesday, Sept. 28.

Jane and Butch Centazzo would have been down there when the storm hit, if not for the fact that their son Michael Hoffman was celebrating his wedding in New Hampshire last weekend. Their home is in a community of over 1,000 mobile homes in Venice.

“It’s a mess,” said Jane, who was able to get a status report from a neighbor. “From the pictures it looks like we lost all the siding on the back of the house, gutters and drains are hanging or missing entirely, and the corner of the roof has been rolled back.”

She’s worried about some of the elderly people in the community who may have chosen to not evacuate, though she said all her personal friends left for other cities or hotels. She feels lucky to have missed the storm but also lucky to be a part of a community where, she hears, people are out helping each other patch things up and sharing meals made on gas grills while waiting for utility service to be restored.

Normally the Centazzos would spend the next seven months in Venice, but this year is uncertain. They will be heading down there this week to survey the damage and determine to what extent their home is livable, but without seeing it for themselves, Centazzo can’t say if they will stay to oversee repairs. “We have to play it by ear,” she said.

‘It’s a war zone down here’
David McGovern was with his companion Lyn Nunes when Ian took a direct hit on his Punta Gorda home.

“We thought it was going to hit Tampa and the Panhandle,” he said. “Then it turned east.” Reached Monday afternoon, McGovern’s cable had just been restored and they were starting to see more of the images that the rest of the country has been seeing since sunrise last Thursday.
“It’s a war zone down here,” he said.

His house is still largely intact, but his community, Kings Gate, is across a small lake from a mobile home park that didn’t fare as well. Much of the debris from those destroyed properties ended up all the way over the lake into his neighborhood.

At McGovern’s location, the storm started out bad, but bearable. “Around 4 p.m. the eye passed over. It was about 40 miles wide,” he said. “Then it got really ugly.”

Even with his storm shutters securely closed, the three sliding glass doors on the south side of the house were “pulsating” in the force of the 150 mph winds (as measured by his next door neighbor’s wind indicator). McGovern and Nunes took a king-sized mattress and covered as much of the glass as they could, then secured it with the living room furniture, before setting up a shelter in an interior closet in case their improvised barrier failed.

For three hours McGovern and Nunes listened in horror to the raging storm. “It was just awful,” he said.

With the storm in the rearview mirror, McGovern is feeling lucky that he was personally spared much property or personal damage, though he admits the next time he hears the word “hurricane,” he’s heading in the opposite direction.

“I will never do that again.”

‘So numb I couldn’t cry’
Mary Ann Sousa spent 28 years as a realtor in Bristol with Coldwell Banker, until choosing not to renew her license and ease into retirement in 2020. At that time she was already spending most of her time in Venice Isle, a 55+ mobile home community in Venice. When Ian began to bear down on Florida, Sousa checked into a hotel, spending four nights. When she emerged to view the devastation, it was beyond her worst fears.

“We never thought that could happen here,” she said. “It’s been more than 100 years since the last substantial storm.”

Sousa’s house lost a good part of its roof, which left much of it exposed to the elements for the duration of the storm. Her nephew and brother-in-law drove 24 hours from Rhode Island with plywood and tarps, but even with that temporary protection, she can’t stay there.

Reached Monday, Sousa was not sure what her next move would be, if she will rebuild or go somewhere else. She’s grateful for her family and community — including a sister in the area, a friend who will let her stay with her while she makes a plan, and her daughter Melissa, who flew down and helped with insurance and FEMA paperwork and categorizing her possessions.

Sousa is taking stock of the good things. “I’m grateful my friends and family are all safe,” she said. “And there is so much help in this community, people are opening their houses. One person just made 160 meals for the people who had no power. Everyone is so helpful.”

‘There are people who have no idea where they’re going’
Stephen Knapman is a retired Newport Fire Department Captain, a builder and current Bristol Fire Department volunteer — so fixing disasters is right in his wheelhouse. Coincidentally, Knapman was scheduled to fly down to Florida last Wednesday, the day of the storm. He had just bought a boat in August that he would be keeping at his parents’ home in Matlacha, an eclectic sweet little artist colony and fishing village that’s not much more than a wide spot on the causeway between the mainland and Pine Island, just north of Ft. Meyers Beach and south of Punta Gorda.

Knapman started watching the storm a few days out; it seemed to change by the day. As soon as Orlando announced they would be closing the airport at 10 a.m. Wednesday, he hopped a Tuesday night flight, arriving around midnight, booking a room near the airport. Wednesday saw him driving south to Ft. Lauderdale to stay well clear of the storm. While there, he stocked up on roofing material.

“I had no idea what it was going to be like,” he said. “With Charley (a 2004 Cat. 4 storm) we lost a few shingles on the roof…I was hoping for the best but realizing that it was probably going to be a lot worse.”

“I woke up Thursday morning and I started heading west down 75 through Alligator Alley,” Knapman said. “I didn't really see any damage on the highway until right around the Ft. Myers airport exit and there was a mall sign that was just destroyed…I went to Punta Gorda and I checked on a couple of friends’ houses. There was a lot of damage there. Then I checked on another friend's house in Port Charlotte, and there were roofs off everywhere. Traffic lights were gone. Not just not working…completely gone.”

He stayed with family in Tampa before returning to Punta Gorda to help patch another family member’s roof before heading to try to reach Matlacha, a trip complicated by the fact that the bridge to the island was badly damaged and impassable.

“I went to a boat ramp and just started asking around, and these awesome guys gave me a ride over…We went to my house and that's when I saw the damage.”

“It took about 20 minutes just to assess exactly how bad it was.”

Knapman and a friend returned the next day loaded with supplies to patch the house. He suspects it’s a total loss — there’s water damage throughout, not just from rain but storm surge as well — but he wanted it protected from any further damage. He’ll be going back soon to salvage whatever personal effects are salvageable.

“My mother made a lot of the quilts that are on the beds, so I want to get all that stuff out of there.”

Knapman has no idea how long it will take to get Matlacha back to normal — or even what that might look like. Happily, the causeway is being repaired quickly and may even be open by the end of this week. But the local government is talking about replacing all the old and outdated utilities and burying everything underground, so that will take additional time. “If we're back in in a year and a half, I think I'd be happy,” Knapman said. “To be honest with you, it’s probably going to be months before we even know.”

“At first I didn’t want to show my parents the pictures but they wanted to see them so I showed them this morning,” he said. “It’s one thing to look at a natural disaster when you are detached; it’s different when it’s your house, and your things.”

“But I think the thing that's most heart-wrenching is for some of the people down there, quite a few in our street, that's their only home. I have a house in Bristol. My parents have a house. That's our second home, and we consider it part of our family, but there are people that don't have anything, and I was watching them get on the boat with a couple of bags, and they had no idea when they’d get back to their house and no idea where they’re going.”