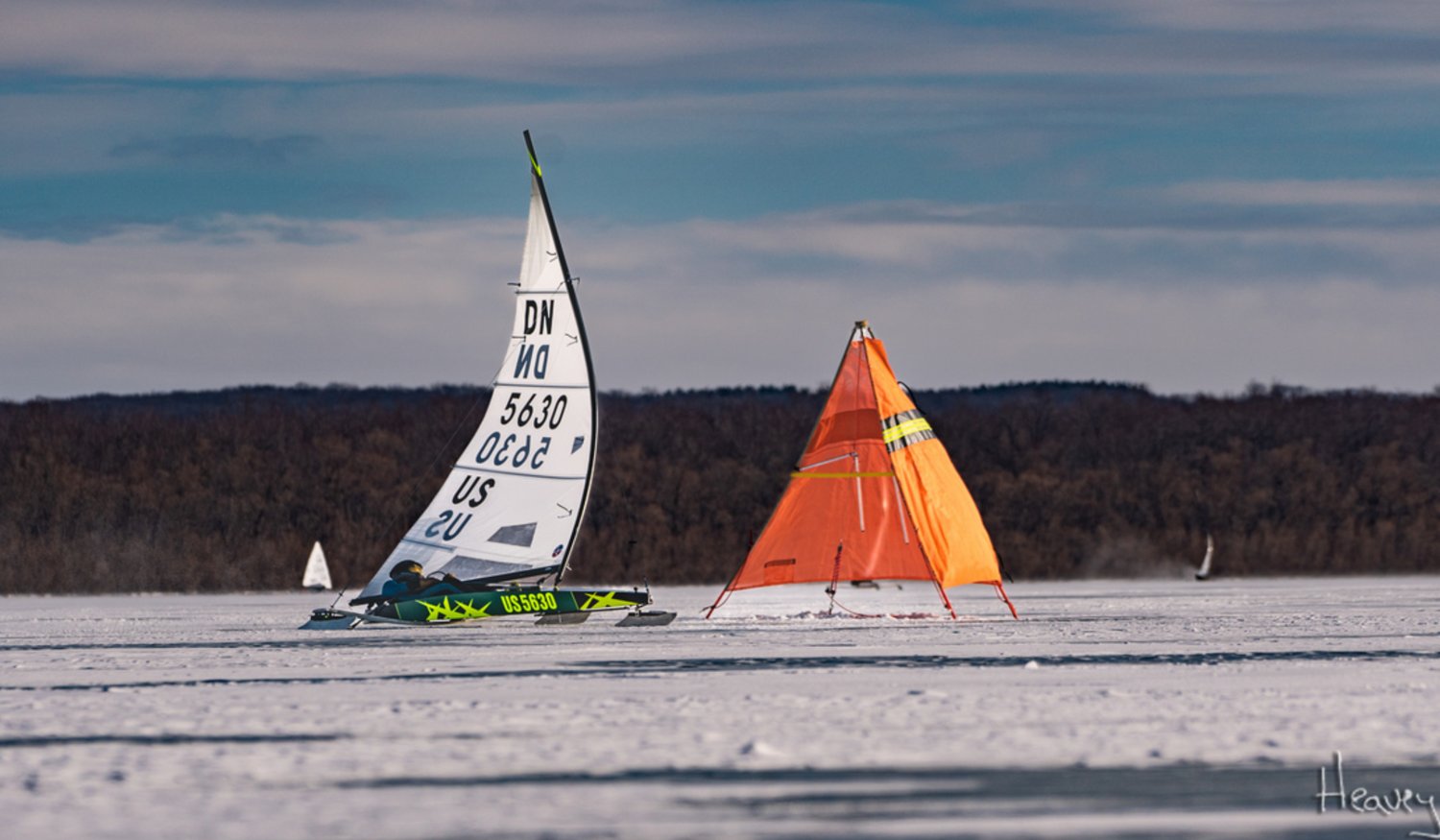 Karen Binder approaches a mark rounding at the 2022 DN US Nationals. “I'm going about 50 mph and actually accelerate to about 55 when I ease my sail to go around the mark,” Binder said. “It's a slight bear away and then I sheet back in to make sure my mast bends to force the boat and runners down so I don't spin out or lose control going downwind.”
Sean R. Heavey 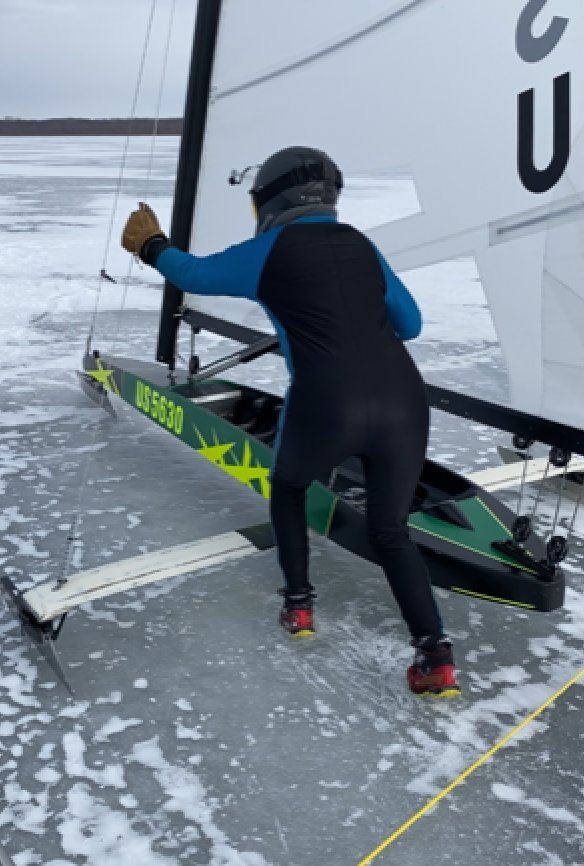 Karen Binder starts a race at the 2022 DN US Nationals. Similar to the start you might see at an Olympic bobsledding event, competitors (wearing spikes on their feet) push start their boats before catching the wind. 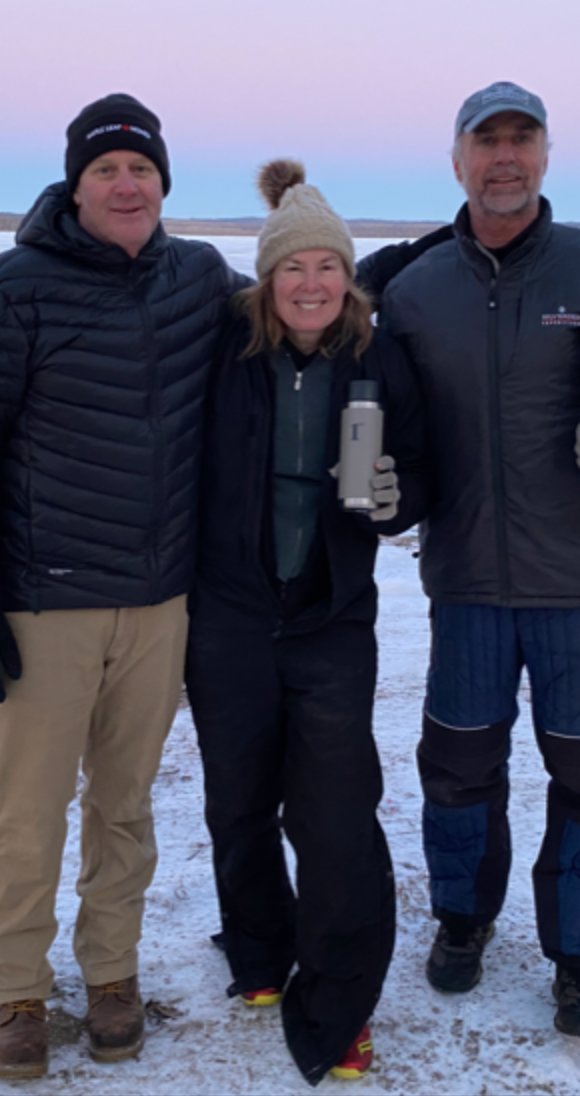 Rhode Island was well-represented at the 2022 DN US Nationals, with (l-r) Sean Healy of Portsmouth, Karen Binder of Bristol, and James "T" Thieler of Newport.
Previous Next
Posted Friday, February 11, 2022 8:00 am
By Christy Nadalin

For most of us, reaching speeds of 60 miles an hour sailing an iceboat across a frozen windswept lake in January would be a terrifying prospect.

For Bristol’s Karen Binder, there’s nowhere she’d rather be.
“There’s nothing more beautiful than being out on a frozen lake, in the middle of winter,” she said. And it turns out, Binder is really, really good at this specialized sport of iceboating.

A competitive sailor most of her life, Binder was only introduced to the sport about four years ago when her friend James "T" Thieler, a top ranked racer himself, took her out on Fall River’s Watuppa Pond. An avid frostbiter and longtime participant in Bristol’s Laser fleet (those hearty souls you see on the harbor Saturdays throughout the winter), Binder took to it instantly. She began competing two seasons ago, and the last week in January she took the top spot in the Silver Fleet at the 2022 DN US Nationals on Lake Senachwine, in Putnam, Ill.

Though she admits a sailing background gets you about halfway there, iceboating racing is, in many ways, completely different.

“The angles are tighter, and there’s no sense of reading gusts and wind shifts, the way you can on the water,” she said.

The stakes are significantly higher, too. At top speeds of 50 to 60 miles an hour, crashes can be devastating. Binder has already had her share of mishaps. In her first year of racing, she was coming around a leeward mark too fast and she flew out of her boat, finally stopping about 100 yards away. She’s tripped on a start (“I supermanned” she said), forgotten to set her brake and chased her boat across a lake, and had a full-on collision that totaled her boat, but left her, thankfully, intact.

The ice boat used by competitive racers is the DN, originally designed in Detroit in the 1950s, though it has since evolved with available carbon fiber technology. These days they typically cruise at three to four times the speed of the prevailing wind. Several DN components can be sourced through Bristol-based manufacturers. An introductory boat will cost about $2,500, while serious racers will put upwards of $5,000-$10,000 into their vessel.

Though considered one-design, each boat is tuned specifically for the weight and body type of its owner. A fleece-lined neoprene suit, spikes, and a helmet with chin strap rounds out the competitor’s kit. Because of the personalization of each boat, racers travel with their gear (which also includes nine different sets of runners for variable conditions, and two sets of sails), meaning that a season of ice boat racing requires a great deal of winter road tripping through the rural north, from Maine to Montana.

The 2022 DN US Nationals required even more travel than usual. Originally scheduled for Madison, Wisconsin, an unexpected snowstorm made the venue unworkable and left organizers scrambling to find a new location. The event — and all 75 competitors — relocated to Putnam, Ill. with four days notice. Originally scheduled to begin Jan. 23, the event finally got off on Jan. 26. Competitors are divided into Silver and Gold fleets based on standings. Gender is not an issue: Binder was one of only three women who qualified for the competition, and one of the other two had to drop out with equipment troubles.

Competing in the Silver Fleet, Binder dominated, finishing first in each of the five races run. The Gold Fleet was won by five-time world champion Ron Sherry, with Thieler, of Newport, in second place. Binder’s finish will qualify her for the Gold Fleet moving forward, as well as the world championships — though those will be held in Europe this year, and due to COVID travel complications, Binder will pass, but look forward to them being held in North America next year.

If you think you may recognize this fearless competitor from around Bristol, you’re probably right. When Karen Binder is not caravanning across the north to race on the ice, you have likely seen her in a twinset and a pair of sensible flats, welcoming guests to Blithewold, where she’s served as the Executive Director for many years. But for those who know this established professional and mother of two grown sons well, her transition from competitive recreational sailor to midlife daredevil is not all that surprising — least of all, to Binder herself.

“Actually,” she said with a laugh, “the coldest day of ice boating is warmer than flipping a boat in Bristol Harbor.”