Abutters worry about safety and impact on neighborhoods

After listening to a few Bristol residents concerned about how a new bike route would pass by their homes, the Bristol Town Council decided it needs more time to study that route and hear from …

Abutters worry about safety and impact on neighborhoods 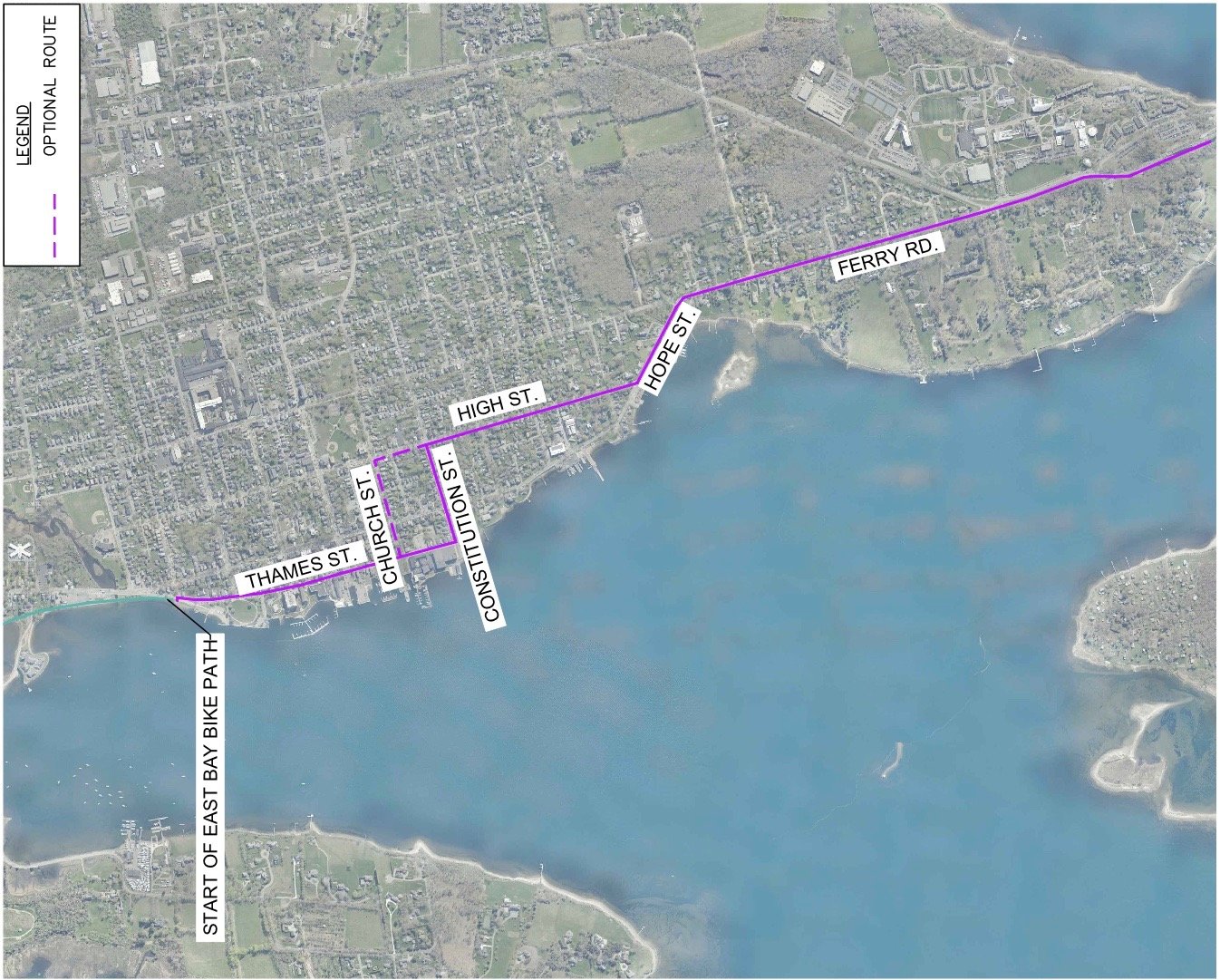 The favored bicycle route would connect from the terminus of the East Bay Bike Path (left and north), to Thames Street, then High Street, then Ferry Road, Roger Williams University and the Mt. Hope Bridge (right and south).
Posted Thursday, December 3, 2020 7:00 am

Once they get past the Lobster Pot, it’s the Seekonk Speedway. They just let it rip until they get up to the Mt. Hope Bridge.”
Virginia Yanyar
By Scott Pickering

After listening to a few Bristol residents concerned about how a new bike route would pass by their homes, the Bristol Town Council decided it needs more time to study that route and hear from impacted residents before giving its endorsement.

The decision came Nov. 18, following more than an hour of discussion during a public hearing held via Zoom. Town planners, led by Director of Community Development Diane Williamson and Arnold Robinson of the Fuss & O’Neill engineering team, gave a brief presentation of the project, which has been in the planning stage for much of 2020.

The consultants, working courtesy of a state grant, studied numerous possibilities for extending the existing East Bay Bike Path with a dedicated route that passes through downtown Bristol to a terminus at the base of the Mt. Hope Bridge. After months of study and feedback from hundreds of residents, they decided on a route that runs mostly along Thames Street, High Street and Ferry Road to reach the southern tip of Bristol and the entrance to Roger Williams University.

The project would not create a dedicated “bike path” that most people are commonly familiar with in the East Bay. Because it would run along existing streets shared with motor vehicles, it would be more of a “bike route,” delineated by road paintings, robustly marked street crossings, ample signage and perhaps a blinking light or two. A key focus of the project is safety along the route, and Mr. Robinson made it clear that cyclists themselves are critical to overall safety.

“We had a lot of feedback from people about cyclists, and some drivers, who just blow through intersections. So that’s a behavior that design can help to ameliorate,” he said. There will be places where they want cyclists to stop and walk. “We will be looking at changing behavior from both user groups, but especially cyclists.”

While several people spoke in favor of both the concept and the specific plan, others questioned the safety and impact of the route on their relatively quiet neighborhoods. The most vocal of those in the “concerned” camp was Diane Magee, a resident of lower High Street. Her house sits directly on the proposed route.

Ms. Magee questioned the veracity of the town’s efforts to get feedback from those directly impacted, saying that most of her neighbors knew nothing about this and are concerned. Mr. Robinson said they did not contact abutters directly because they had not settled on a route yet, but that is part of the next phase of analysis.

Ms. Magee further challenged the town to guarantee that this route will never require the removal of on-street parking spaces along High Street, which she said would be “disastrous” for the residents of that area.

Ms. Magee called this a bicycle path to “nowhere,” as it leads to a dead end at the Mt. Hope Bridge. And she dismissed any suggestions that there won’t be much increase in bicycle traffic along High Street, saying “Why would we spend millions on this project, if it’s not a lot of people?”

Finally, she used the words of the Bristol Comprehensive Plan against the project, first quoting the plan — “The residents of Bristol have a desire to retain Bristol’s small-town character and natural beauty” — before commenting, “I submit to the honorable town council that the [traffic] light signals that are in the visual slides of this plan, the flashing lights, the speed humps, the idea of a complete-street concept, all are in direct conflict with that ‘small-town character’ and ‘natural beauty’ that the residents or Bristol desire to keep. And I speak for myself, and for many people on this street.”

All those in favor

Numerous residents urged the council to endorse the proposed bike route. Bethany Foster said she rode the path numerous times this fall to get a feel for it. “It was not pleasant at all,” she said. “I can see why many of the college students feel very isolated, if they don’t have cars, because it’s not a very safe path.” She would like to see the town develop the route, with the various safety measures proposed.

MaryKae Wright said she is extremely excited and supportive of the plan, but she asked whether it would be safer for bikers to cross from Ferry Road to Wood Street, and vice versa, rather than from Hope Street to High Street in front of The Lobster Pot restaurant. Mr. Arnold said they studied both possibilities and believe her suggested route has unsafe sightlines for bicyclists trying to cross in an area where cars often travel well above the posted speed limit.

Loren Byrne said he often commutes via bike from his home on Paul Street to the university campus and he believes this project will make the route much safer.

Speaking as both owner of Judge Roy Bean restaurant and as representative of the Bristol Merchants Association, Zach Rivers said he looks at the new bike route as an economic driver. “There are a lot of people who come to Bristol on the bike path, and unfortunately a lot who don’t make it downtown,” he said.

Lisa Fonseca lives on Ferry Road, and the route would pass directly across her driveway. She said they are regularly inundated with deer in that area, and she worries about the convergence of cars, trucks, deer and cyclists in an area where motorists frequently disregard speed limits.

Ms. Fonseca’s neighbor, Virginia Yanyar, asked who would have the right of way along Ferry Road — cyclists on their route, or residents coming in or out of their driveways? She too warned about the speeding vehicles in the area.

“I caution people, watch what happens on that road … The traffic limit on that road is never taken seriously from most groups of people. Once they get past the Lobster Pot, it’s the Seekonk Speedway. They just let it rip until they get up to the Mt. Hope Bridge,” Ms. Yanyar said.

All of the town councilors talked about their concerns and the need for more study. Mary Parella also called it a “bridge to nowhere,” while questioning the state’s desire to connect bike paths throughout the region. She said until there’s a realistic plan to get bikers over the Mt. Hope Bridge, that’s not likely.

“For the students and faculty at the college to come downtown, that’s one thing … but in the other direction, once we get people through downtown, we’re not really taking them anywhere,” Ms. Parella said.

Finally, she asked whether the millions of dollars that might be spent on this route would be better spent creating safe bike routes east-west through Bristol, so the vast populations living on the east side of Metacom Avenue have decent pathways to get downtown or to the East Bay Bike Path.

Aaron Ley is very supportive of the concept, saying “I’ve always considered this to be a missing link, between downtown Bristol and the university. I think it’s always a good thing to connect our largest employer with the downtown.”

Mr. Ley also suggested that bringing more people downtown on bikes will relieve some of the pressure on parking spaces, and that bike routes and fostering an active lifestyle are traits of some of the best cities in America.

Council chairman Nathan Calouro said the concept has “a wonderful amount of merit,” but he worries about impact on some of the quieter neighborhoods, like Ferry Road and lower High Street. He said people can of course bike wherever they choose, but “there is a massive difference, in my opinion, when we direct, when we corral people, to go one way or another, into a quieter neighborhood … We should take the next steps to study this, but I don’t believe, in its current form, we’ve addressed the concerns of the neighbors.”

The council voted to continue the discussion at a future meeting. In the meantime, the consultants are posting updated designs, renderings and schematics of the proposed route on the project website (https://sites.google.com/view/bristol-bicycle-connector/), as well as reaching out directly to residents along the proposed route.

The study phase of the project is expected to last throughout 2021, to end with “shovel-ready” plans. The consultants estimate $1.5 million to complete the route, which is not currently budgeted. The money could come from a variety of sources, including state and federal grants.