The ceremony included the badge retirement of Sergeant Michael Jannitto and Patrolman Richard Jean-Georges, both of who died while serving as members of the department. 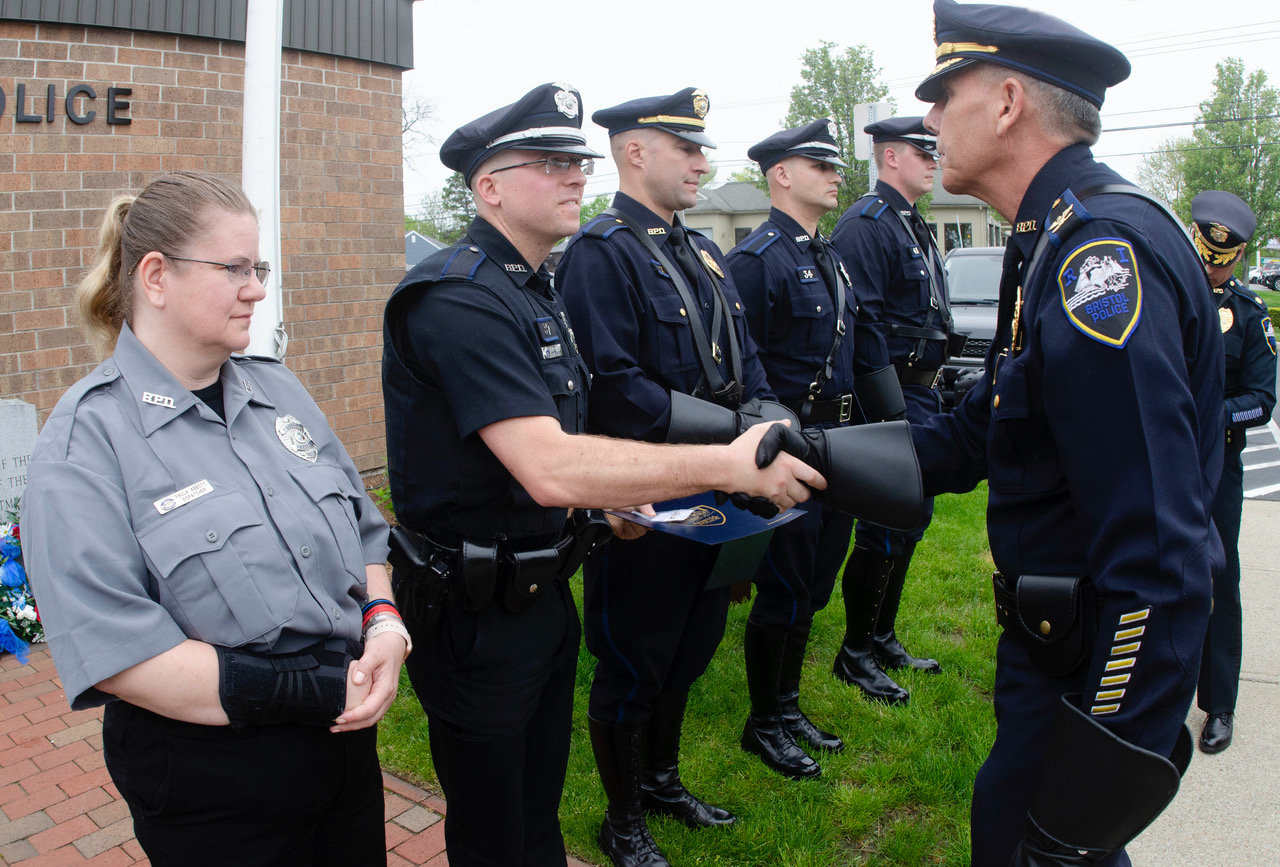 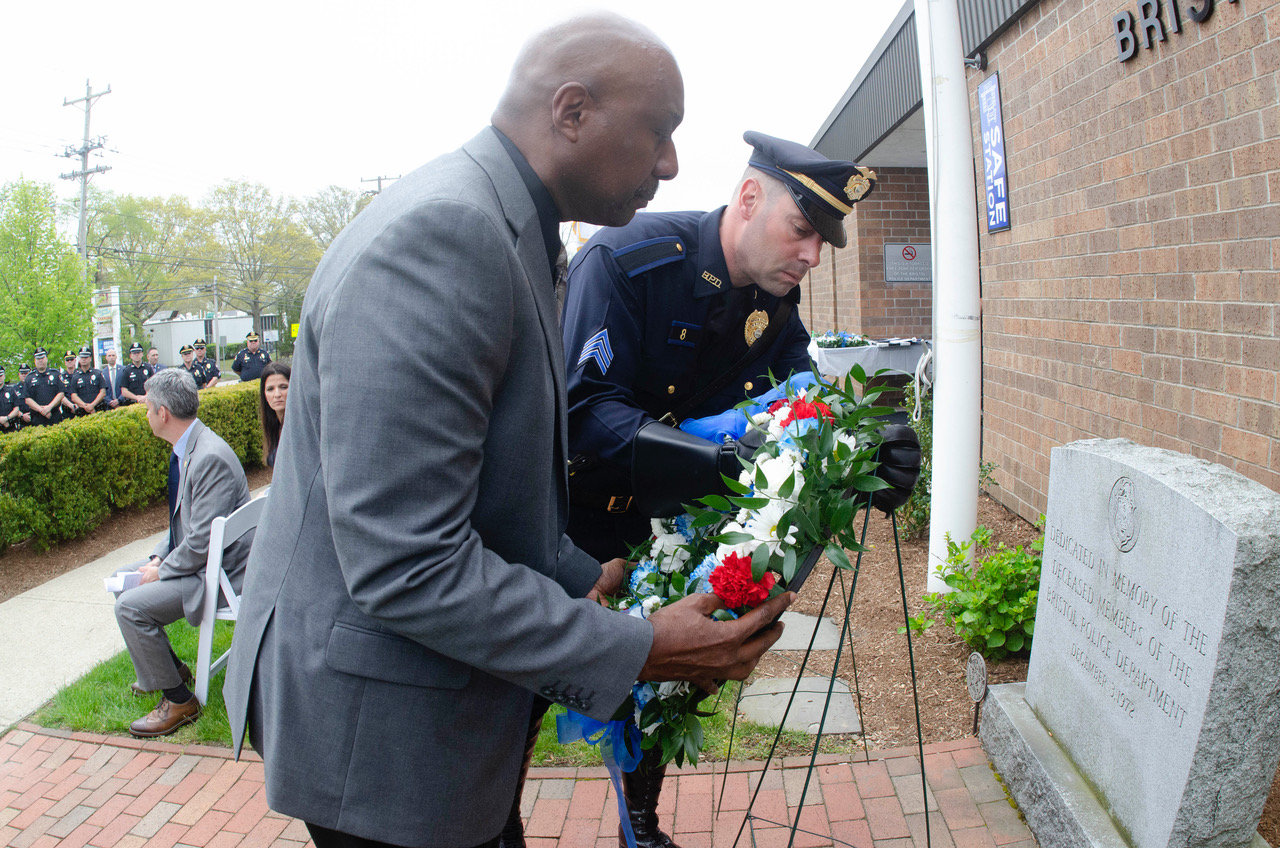 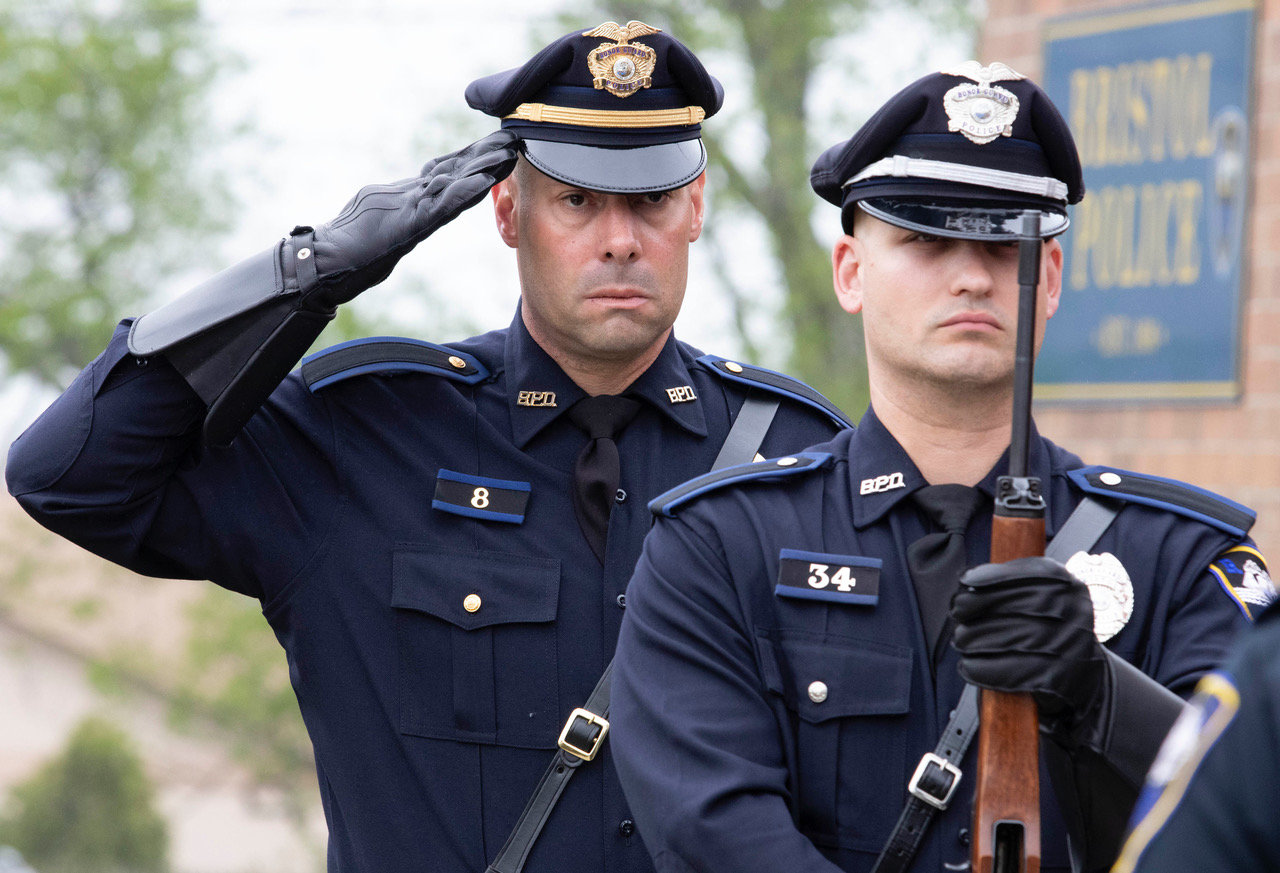 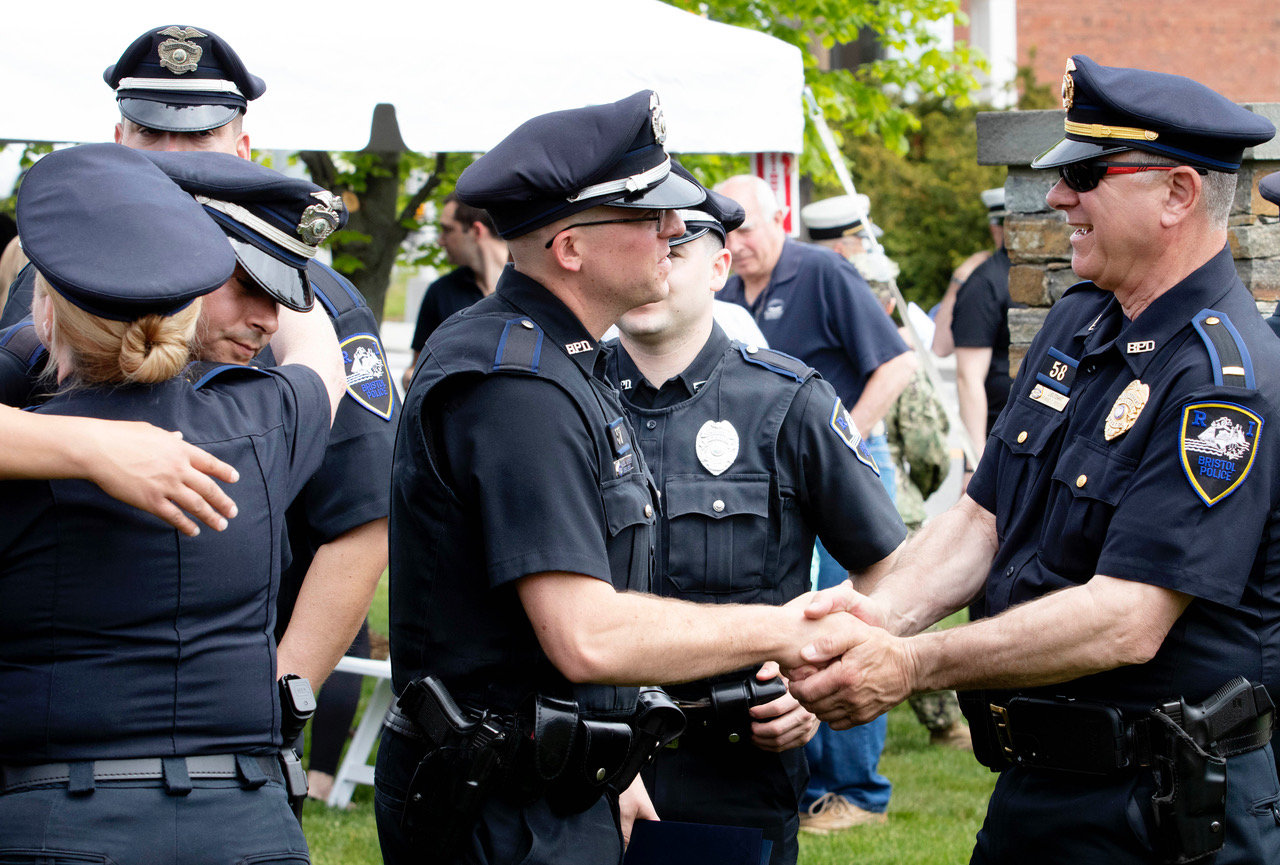 Last Friday, May 13, the Bristol Police Department held their Officer Memorial and Awards Ceremony, in conjunction with the observance of National Police Week.

The ceremony included the badge retirement of Sergeant Michael Jannitto and Patrolman Richard Jean-Georges, both of whom died while serving as members of the department. In addition, several officers were awarded department citations and letters of recognition for their outstanding service over the last serval months.

Sgt. Michael Viera opened the event, and following the presentation of colors and invocation, he introduced Town Administrator Steven Contente, who addressed the families of Jannitto and Jean-Georges.

“Today is a solemn day, but hopefully it brings solace and peace to your hearts,” he said. “You are with friends, and you are with people who served with them or were served by them.”

Contente’s remarks then turned to recent national trends that have impacted the already-hazardous profession of law enforcement.

“There were 73 law enforcement officers in this country who were actually murdered,” he said of the last year. “What’s important to us is a safe community in support of law enforcement…We will also ways do what’s best to ensure you have the proper equipment and training.”

“On behalf of the Town of Bristol, we are very proud to have the badges of Sgt. Michael Jannitto and Patrolman Richard Jean-Georges retired and on display.”

Chief Kevin Lynch spoke next, echoing some of what Contente said, noting that the murder rate of police officers is far outpacing that of other violet crime,

“Wearing the badge shouldn’t make you a target,” he said. As of April, over 100 have been shot in 2022 alone. “It’s unlike anything I have seen in my 35 years of public service.”

Honoring missed and respected members of the Department
To the solemnity of the day, Lynch said, “I’m honored to be in the pretense of so many accomplished officers receiving departmental recognition. This is a special day for the Bristol Police Department. Today I had the honor of authorizing the retirement of Sergeant Michael Jannitto’s badge, number 17, and Richard Jean-Georges’ badge, number 36, to memorialize their accomplishments and exemplary service to the Town of Bristol, and honor the legacy of both of their lives cut short.”

“Sgt. Jannitto began his career with the Bristol Police Department in 1981. During his career, he was commended many times for his outstanding police work in both the uniform and detective divisions,” said Diniz. “He died at the age of 27 on January 13, 1988. On this day, the Bristol Police Department lost a loyal, honest and dedicated police officer. Sergeant Jannitto always showed a strong dedication to the Bristol police department and to the citizens of the town he served so well.”

“Richard Jean George served as a patrolman with the Bristol police department from May 2012 to June 2015,” said Gonsalves. “During this time, he became most passionate about making a difference in the lives of adolescents through service, leadership, and outreach. His lighthearted and positive nature was felt strongly by the Bristol community and the memory of his charismatic personality has been engraved not only within the minds of the police officers with whom he served, but also occupies the soul of the town he so proudly served.”

The Bristol Police honor guard, with members of the late officers’ families, laid wreaths on the memorial in honor of Jannitto and Jean-Georges.

Officers honored for a year of service and bravery
Major Brian Burke then presented 18 awards to 15 officers. Ptlm. John Mlynek received a Chief’s Letter of Recognition for an incident in August of 2021 when he administered CPR and Narcan and saved the life of an unresponsive Bristol man.

Sgt. Timothy Gallison, Ptlm. Alex Booth, Ptlm. Derek Jensen, Ptlm. Joshua Monson, and Dispatcher Paula Abbott received a Chief’s Letter of Recognition for responding to a domestic situation on High Street in November of 2021 during which shots were fired at a witness. A standoff ensued and the suspect emerged after five hours.

Sgt. Michael Viera, Ptlm. John Mlynek, Det. Adam Clifford, Det. John Nappi, Palm. Angelo Greco, and Palm. Sean Gonsalves were honored for an incident in which an armed and suicidal male was successfully disarmed and taken to the hospital. Viera and Mlynek received a Citation 2nd Class for taking the lead in calming the resident while the others received a Chief’s Letter of Recognition.

Det. Adam Clifford received a Citation 2nd Class for outstanding detective work on an extensive fraudulent check scheme, triggering a multi-jurisdictional investigation beginning in March of 2021 and ending with an arrest and federal charges filed in August.

Ptlm. Derek Jensen was given the highest award, a Department Commendation, for an August 2021 incident in which he successfully and safely apprehended a suspect who sped through downtown Bristol, intoxicated, brandishing a 9mm weapon.

“In 25 years I don’t recall an officer receiving a Commendation,” said Burke. “Officer Jensen continues to be a leader exemplifying the core values of the Bristol Police Department.”

Cupboards are bare at food bank in Portsmouth