Sen. Jack Reed, in Bristol on Monday for the official completion of phase 2 of the Tanyard Brook project, stood before a small group of contractors, engineers and town officials gathered on Charles … 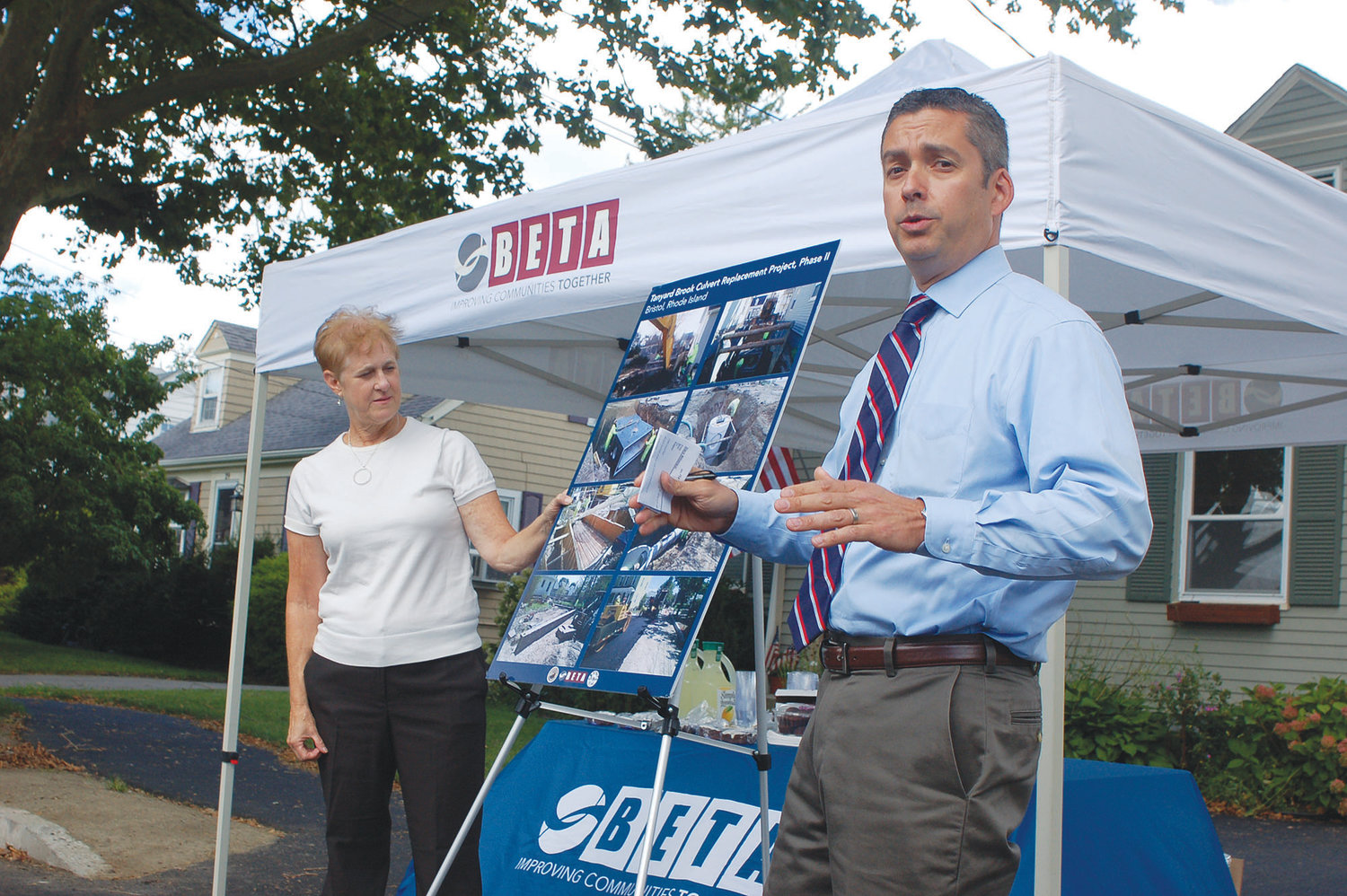 Sen. Jack Reed, in Bristol on Monday for the official completion of phase 2 of the Tanyard Brook project, stood before a small group of contractors, engineers and town officials gathered on Charles Street. He thanked Town Administrator Steven Contente, who moments earlier had described just some of what went into expanding the underground culvert that will resolve the longtime flooding issues along the Tanyard Brook watershed.

“Bristol is an extraordinary community,” said Senator Reed. He thanked Mr. Contente for his leadership, as well as his articulation of the details of the underground project, invisible to the casual observer. “I’m most pleased that Steve described the intricate engineering so I don’t have to go back to Washington and say we spent $1.8 million to blacktop a driveway.”

Town Council President Nathan Calouro likened the project, this phase of which has had a total cost of about $5 million, to a roof repair on your house. “We’ve taken $5 million and buried it underground. It’s like when you repair your roof. Where did the money go? It’s so you can stay dry in your home.”

Tanyard Brook has been a source of neighborhood flooding for nearly two decades. When the 4,500-foot culvert was originally designed and constructed before the 1960s, Tanyard Brook was intended to handle runoff from a 10-year storm event. Since then, the town has grown and buildings and concrete surfaces have replaced woodlands that helped minimize runoff. The clogged and collapsed culvert was susceptible to flooding during heavy rain events. The $3.5 million Phase 1 of the project corrected the outflow into Walker’s Cove with a tide gate to allow for the release of storm water when necessary.

The just-completed phase 2 of the project impacted the north side of Garfield Avenue to Richmond Street. The next phase, from Richmond Street to the reservoir on State Street, will complete the project, and will likely get underway in 2020. Once that part is completed, it will ease flooding issues in neighborhoods like Reservoir Drive, which resident Roland Poissant claims has been underwater following heavy rains for as long as he remembers — since at least 1949. “I have pictures of my nephew floating around in an inner tube out here.” As part of the next phase of the Tanyard Brook project, the drainage from Reservoir Drive will be tied into the Tanyard Brook culvert via the Department of Public Works property on Mt. Hope Avenue.

Local officials also gave thanks to Senator Reed for some $1.1 million in federal funding secured to help repair and improve the Prudence Island Ferry dock, just south of Rockwell Park. That project is scheduled to break ground on Tuesday, the day after Labor Day.