Six and a half years after Robert Healey Jr.’s death, his life and political career is the subject of a new book by Bristol-based author Lawrence W. Verria 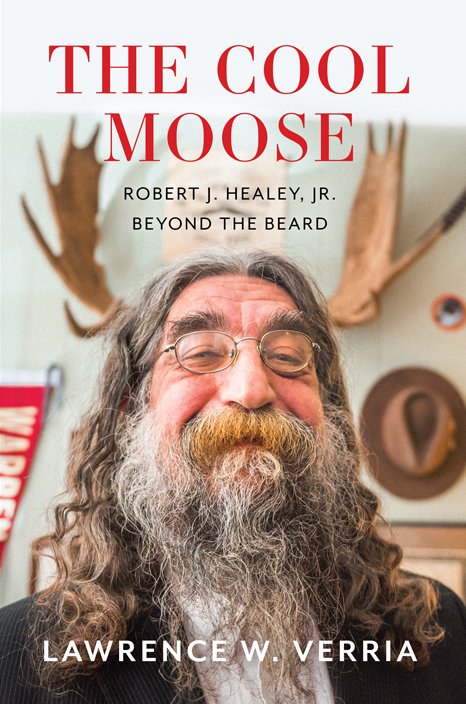 A new biographical book on the late Robert Healey Jr. will go on sale online this week and in print next week. It is authored by Bristol resident Lawrence W. Verria and published by Stillwater Press.
Posted Tuesday, September 20, 2022 9:00 pm
By Ethan Hartley

He was a firebrand whose unforgettable physical appearance was only matched by the uniqueness of his political platform. Despite never winning higher office than that of a local school committee chairperson, Warren’s own Robert Healey Jr. managed to establish a legend and a legacy that still holds interest in Rhode Island political circles today.

Six and a half years after Healey’s death, his life and political career is the subject of a new book by Bristol-based author Lawrence W. Verria — “The Cool Moose: Robert J. Healey Jr., Beyond the Beard” — which is set to release this week on Amazon and will be available in print next week.

“What made this man tick? Why did he do what he did, so often, despite the political defeats, and persevere onwards?” reflected Verria in an interview about the book. “I thought that was a story to explore, and that’s what I started about three years ago.”

Verria spent countless hours, when not occupied by his teaching job for North Kingstown High School, researching Healey and speaking to those who knew him best throughout his life. He said he read as many as 400 articles from the Warren Times-Gazette and Providence Journal that mentioned him, and interviewed about 25 different people while conducting research on the book.

“I was on a journey, because I really didn’t know where this book and my research and writing was going to take me,” Verria said. “With his passing, there is an awful lot to process here. And I don’t think as a state, we’ve done that yet…When you consider the fact he was in politics for approximately 30 years, and everybody knew who he was at some level — he’s bigger than anyone who actually held office in that sense.”

The good, the bad, and the quirky
Verria had met Healey on a number of occasions, going all the way back to his time as the Warren School Committee chairperson in 1983. Verria was just starting out as a student teacher in Warren at the time, but immediately he found the man intriguing.

“He was fascinating then,” Verria said. “I had him in my classroom to talk to the students. I was impressed with how he acted with students.”

After leaving Warren due to layoffs and finding his permanent role in North Kingstown, Verria had a couple dozen more conversations with Healey over the proceeding years, and invited him attend political forums in North Kingstown on a couple occasions.

Some of the stories that stood out to Verria the most throughout his research came from those early school committee days, the only time Healey, in his long political career, actually held power. Verria said that the book does not seek to deify the man, rather it attempts to portray him exactly as he was — passionate, driven, but also complicated and, sometimes, confrontational and intense.

“What we see there is a man who could, at times, be a bully, be domineering, be a freight train running forward and really not seem to be bothered by anybody being run over or hurt in the process,” he said. “I wouldn’t call it ruthless, but very determined to the extent that other things didn’t come into play as much as you might think in terms of his decision making. It was all about the goal, and winning, and driving forward. That is something that really jumps off the pages to me.”

Verria mentioned how, in pursuit of his goals, Healey would often go way outside the box to try and accomplish them, which would become a common theme throughout his political life.

“He wanted to get a [traffic] light at Mary V. Quirk School…So he puts this contraption together, a blinking light on his head, goes out one morning and stands by the 20 mile-an-hour speed limit sign, that no one is regarding and flying right by, and puts this light on with a sign that says ‘Go 20 miles an hour’. People were going by and blowing the horn and slowing down,” he said. “And then, when that didn’t work enough, at Christmas he dresses up like a Christmas tree and has a sign that says ‘Ye of all faiths, go 20 miles an hour.’”

The book explores how Healey could ignite a small room with his enthusiasm and show signs of true political prowess, only to underwhelm when the cameras were on and the platform got larger.

“There would be these moments of brilliance where you think he’s found himself and he’s found his voice, and then he would disappoint,” Verria said.
Verria said that the book is not intended just for hardcore Rhode Island political junkies, because the story of Robert Healey Jr. is one of perseverance that anybody could relate to.

“I want people to know Bob Healey better than they do now,” Verria said. “I think a lot of people think they know him now because he was so popular for so long. I’m hoping there’s that realization.”

“I also hope that they’re inspired by him,” he continued. “I am. Not necessarily because I agreed with him or I want to be like him, but his story is inspiring for a lot of reasons and his message is worth listening to, and I think it’s bigger than politics.”

About the author
Lawrence W. Verria serves as the North Kingstown High School Social Studies Department Chair. His teaching career spans forty years and includes a stint teaching at Warren High School and Mary V. Quirk Middle School. His professional recognitions include the 2000 Rhode Island Teacher of the Year, the 2008 Susan B. Wilson Civic Education Award, and the 2022 Gilder Lehrman Institute of American History Rhode Island Teaching Award. Verria and his wife, Celeste Verria, reside in Bristol, where they raised their three daughters.