If not for the windows, a recent tour of Pivotal Brewing Company, one of the many new tenants set to make a splash at Unity Park, the site of the former Bristol Industrial Park, would have certainly … 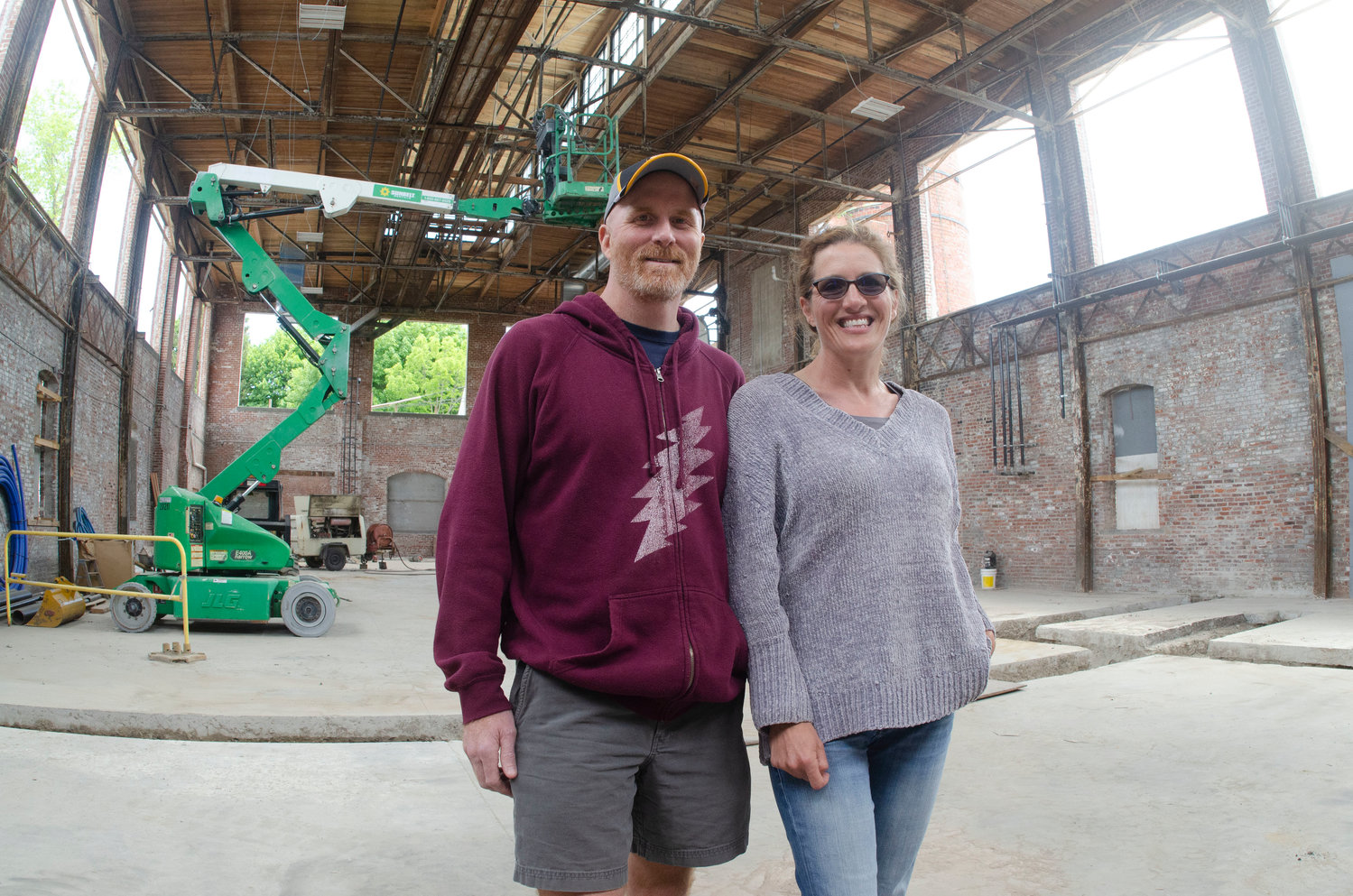 Todd Nicholson and Rebecca Ernst stand inside the 8,000-square-foot space that will house their Pivotal Brewing Company. Part of “Unity Park,” rising in the shell of the old Industrial Park off Wood Street, its construction has been delayed for many months because of supply line delays with their custom, historic windows.
Richard W. Dionne Jr. 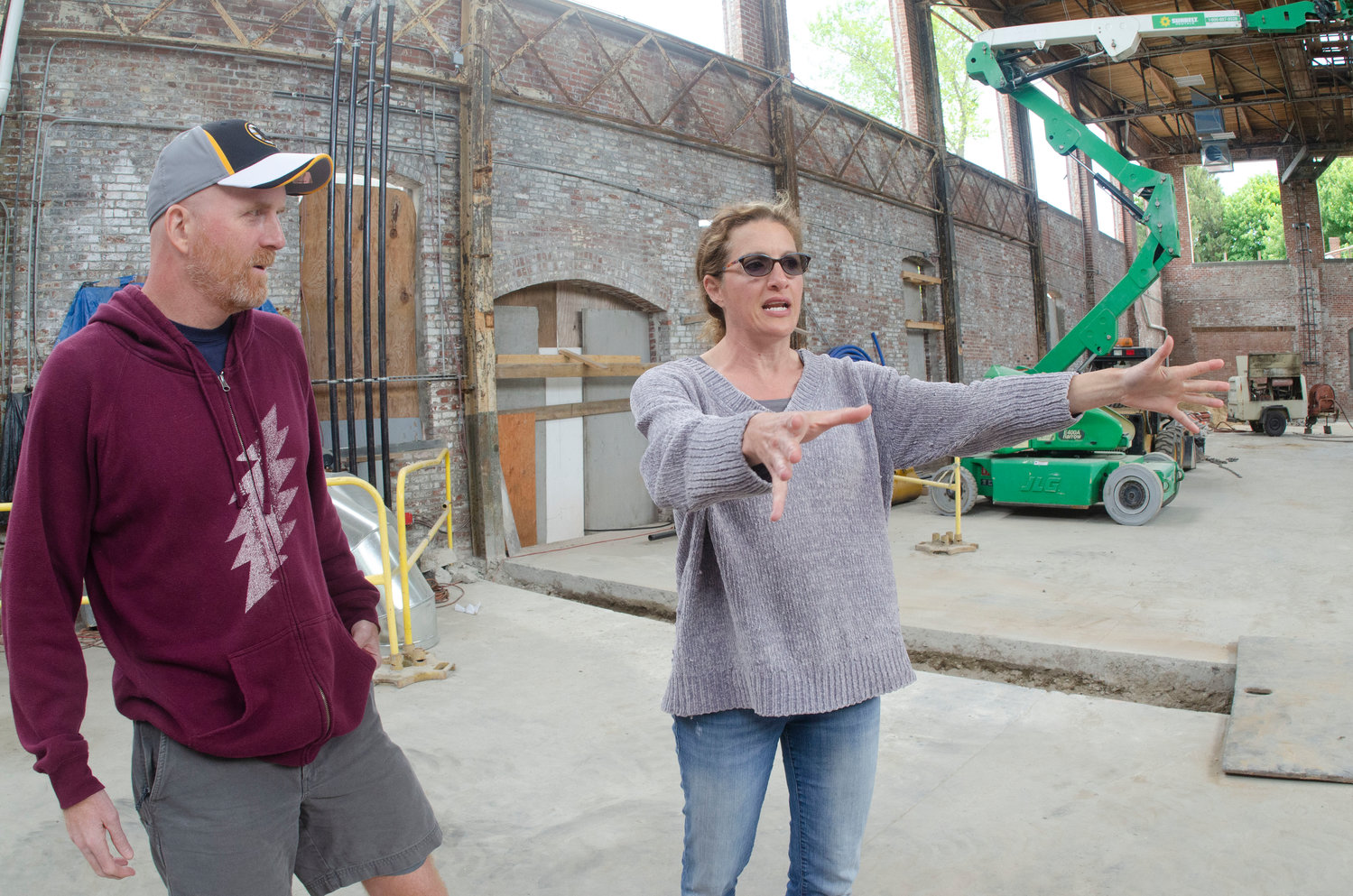 Rebecca Ernst talks about the future layout of their Pivotal Brewing Company, which will feature a taproom, a takeout business and more.
Richard W. Dionne Jr.
Previous Next
Posted Thursday, June 10, 2021 7:00 am
By Christy Nadalin

If not for the windows, a recent tour of Pivotal Brewing Company, one of the many new tenants set to make a splash at Unity Park, the site of the former Bristol Industrial Park, would have certainly ended with an off-the-clock beer.

As it is, the building today is still a bit rough around the edges, but with recent work very apparent, from the freshly repointed brick walls to the network of wastewater channels that will soon be obscured below the floors. It’s 8,000 square feet of vision for partners Rebecca Ernst and Todd Nicholson.

The windows — enormous, custom, fabricated windows — were supposed to be installed in November, but the supply chain delays that have plagued industries throughout the pandemic have pushed back construction for months — but not dampened Rebecca and Todd's enthusiasm for their mission.

They came across the space a little before COVID hit. Providence residents at the time, they liked to visit Bristol, and were having a spin through Colt State Park when they decided to detour and check out the space. “When we came here the first time, we knew this was our space. We could see what it would be,” said Rebecca.

“When I was younger, I was a very novice home brewer,” said Todd.

“He ran an underground keg operation in high school,” laughed Rebecca. “Beer has always been in his DNA.”

In another work life, Rebecca is an experiential events coordinator and Todd works in the technology and product marketing industries. They’ve brought Ben Adams, an expert head brewer, on board. “It’s a perfect partnership,” said Rebecca. “We have complementary skill sets.”

They also like different beers. “I lead with haze,” said Todd of his penchant for hazy IPAs. “Then on to IPA varietals.” Ben has an extensive background with barrel aged beers, sours and lagers (they hope to institute a barrel-aged program under his guidance) and Rebecca prefers a fruit beer.

They are acquiring equipment, also under the guidance of Mr. Adams. About 70 percent of their equipment is ready to be installed. “We’re building this from the ground up,” said Todd. “We’re focusing on the total experience — obviously beginning with a great product, but in this amazing historic building.”

Architect John Lusk agrees. “This is going to be the premier brewery in New England,” he said, a highly credible statement standing under the soaring ceiling, imagining a room dominated by gleaming stainless fermentation tanks. It’s an outcome that Merritt Meyer, former president of Mosaico CDC, might have only dreamed of a handful years ago when, dependent on government funding that never quite closed the gap, the complex was forced to close after failing to meet minimum fire code regulations. It was a tough end to a lot of hard work by a lot of people, but today, with Brick Pizza Co. and Pivotal Brewing nearing completion, and other exciting tenants signing on, this Wood Street acreage has a bright new future.

“Joe (Brito, owner and developer of Unity Park) was the perfect person to come in and take this over,” said Mr. Meyer.

Rebecca and Todd planned the buildout for expansion, if needed. “We have the ability to scale significantly,” said Todd. “We will have our taproom experience and a robust takeout business, and we will probably distribute in small amounts, locally.”

“We’re going to open and see what the traffic tells us,” said Rebecca.

They are also looking forward to collaborating with other local businesses, beginning with Brick Pizza Co., to have their menu available to Pivotal patrons, and they have some other ideas brewing for ways to use the expansive space. “The bike path is a great opportunity,” said Todd, an avid cyclist who is hoping to create a bike and beer club. “We love this town. Bristol has welcomed us with open arms.”