The Barrington School Committee is suing one of its own students.

On Thursday, Oct. 10, the school committee filed a lawsuit in Rhode Island Superior Court against a middle school student who … 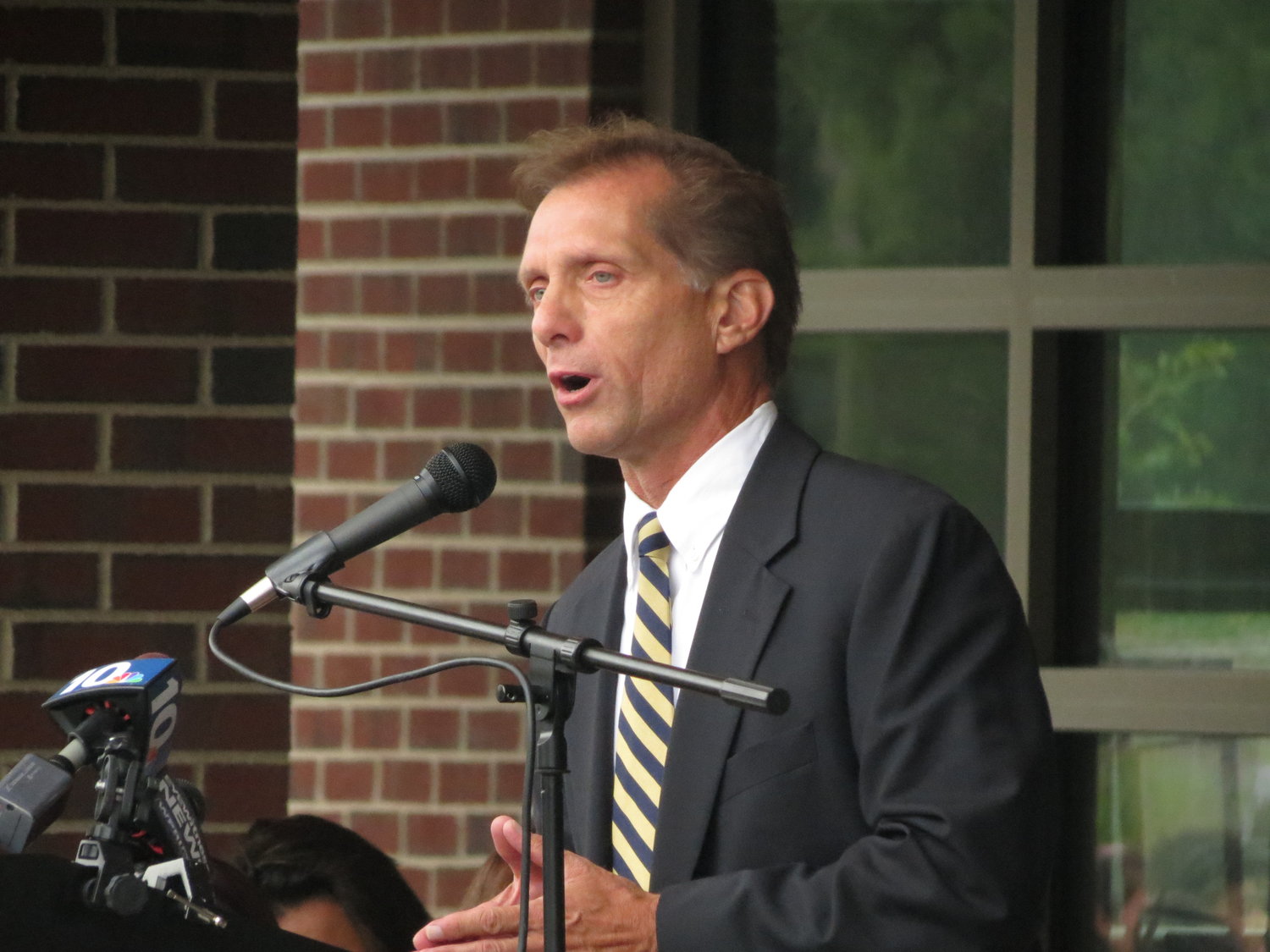 Barrington Superintendent of Schools Michael Messore speaks to the crowd during the ribbon-cutting ceremony for the new Barrington Middle School on Monday, Aug. 26.
Posted Thursday, October 31, 2019 3:40 pm
By Josh Bickford

The Barrington School Committee is suing one of its own students.

On Thursday, Oct. 10, the school committee filed a lawsuit in Rhode Island Superior Court against a middle school student who successfully challenged his three-day out-of-school suspension that occurred in 2018.

The school suspended the student, who was then an eighth-grader at Barrington Middle School, because he was sitting with a group of classmates in the cafeteria while they were discussing the Parkland, Fla. school shootings. A fellow student had overheard the conversation and became concerned; she later told her parents, who contacted police.

But while a police investigation revealed there was no threat and that the student conversation had been misunderstood, school officials decided to suspend three students who had been involved in the lunchroom conversation.

Two of the students accepted the suspensions without protest, but one boy and his family objected. In an effort to have the suspension expunged from the boy’s school record, the Barrington family appealed the suspension to the Rhode Island Department of Education, which later determined that the school district was wrong to suspend the boy.

The Barrington School Committee challenged that ruling by appealing to the Council on Elementary and Secondary Education, but that group ruled against the school committee also.

The CESE found that there was no evidence that the conversation among students, which had been prompted by the Parkland, Fla. school shooting, had been disruptive or warranted the out-of-school suspension.

Now the Barrington School Committee has filed a lawsuit against the student — the committee is looking to overturn the decision by the department of education and collect money that the school department has spent on legal fees during the case.

Barrington Superintendent of Schools Michael Messore said the school committee voted 4-1 to file the lawsuit. He said they decided to pursue the case primarily because they disagree with the state decision, which they believe undermines the safety and welfare of the school community and impacts the district's ability to impose disciplinary actions for threatening behaviors.

Aubrey Lombardo, the attorney representing the Barrington student, was shocked by the school committee’s decision to file the lawsuit.

"I have never, in all my time, had a disciplinary case, a three-day suspension, go to court,” said Ms. Lombardo, who works for the Henneous, Carroll, Lombardo law firm.

The lawsuit also yielded a response from the American Civil Liberties Union (ACLU) of Rhode Island, which represented the Barrington student during his appeal. ACLU Executive Director Steven Brown said:

“The school committee’s actions against this student are outrageous and shameful. It must be seen as nothing less than an attempt to intimidate children and their families who dare to challenge school disciplinary decisions. The school committee is not only wasting taxpayer money, it is undermining the legislature’s efforts to reduce the harmful effect of suspensions on students.”

Here are the candidates running for office in Portsmouth