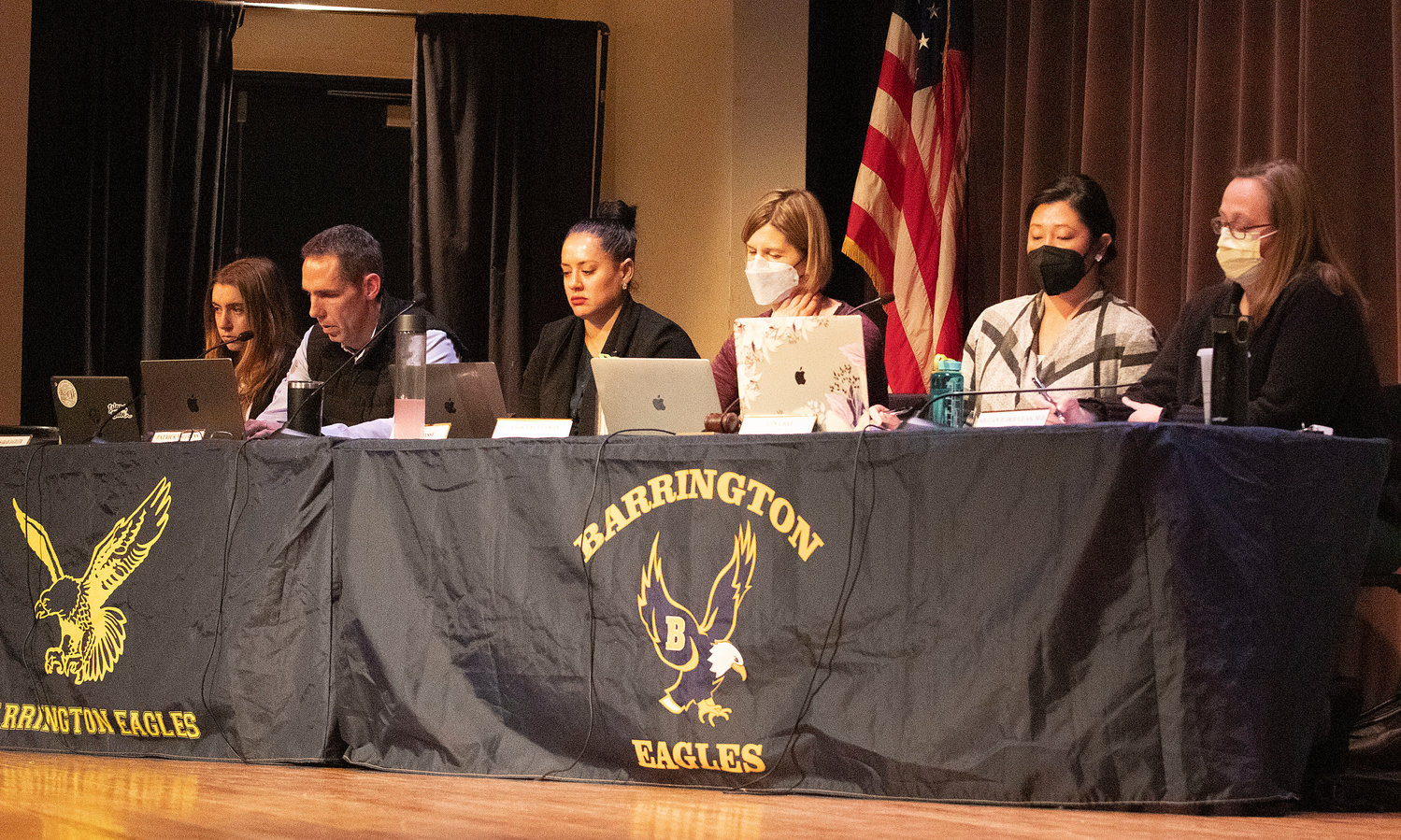 Members of the Barrington School Committee are shown during a meeting earlier this year.
Photo by Richard W. Dionne Jr.
Posted Tuesday, October 4, 2022 8:56 am
By Josh Bickford

In May, Rhode Island Superior Court Judge Jeffrey Lanphear ruled that the Barrington School Committee violated the state’s Open Meetings Act by failing to provide sufficient notice before enacting the school district’s vaccinate mandate for teachers and other employees.

And on Thursday, Sept. 29, Judge Lanphear filed his final decision in the case, ruling that the school committee must pay a $500 fine and also pay for the plaintiffs’ legal expenses and court costs.

The judge stopped short of voiding the vaccine mandate policy, “even though the policy was passed in violation of the Open Meetings Act.”

Greg Piccirilli is the attorney for the plaintiffs, former Barrington school teachers Brittany DiOrio, Stephanie Hines and Kerri Thurber, who were fired after the district denied their requests for religious exemptions to the mandate.

During an interview on Monday afternoon, Oct. 3, Piccirilli said he was not entirely surprised by the judge’s decision. He said the judge clearly indicated that the decision was not the end of the case.

“They (the teachers) have a number of avenues to get vindication,” Piccirilli said.

One of those avenues is through the appeal process to the school committee’s initial ruling to deny the teachers’ religious exemption requests. That appeal will be heard by the Rhode Island Department of Education Commissioner’s office.

“I feel very confident in our position,” Piccirilli said. “Our position hasn’t changed since the beginning. The committee was without the power to do this. It was an unreasonable policy and not one grounded in any reasonable argument.”

Included in the judge’s decision is a $500 fine levied against the school committee.

The judge wrote that the fine sends a clear message that a statute, in this case the Open Meetings Act, was “impermissibly violated.”

“It’s not the amount. It’s the symbolism,” he said.

While the fine may be symbolic, the legal fees may have a larger impact. Piccirilli said that at his last public filing, his fees were approaching $30,000. He added that Barrington taxpayers are likely paying a much higher amount for the school committee’s attorney.

Piccirilli said he would not be surprised if the district appealed the judge’s ruling to the state Supreme Court.

“They’re going to appeal, and then we can appeal,” Piccirilli said. “Maybe the Supreme Court will consider the policy void on their own.”

Piccirilli said he continues to be shocked by the aggressive, hostile actions of the school committee toward three of its own teachers.

“I’ve never seen such hostility by a committee and their lawyers…” Piccirilli said. “I’ve never met more innocent, good teachers. It’s just staggering to me the level of hostility.

“The issue of the vaccine is over. The pandemic is over. Why they do they persist…?”

Piccirilli said the district could have put this issue to rest months ago, they could have stopped accruing larger and larger legal fees that will be passed down to the taxpayers of Barrington. He said officials could have recognized the changing landscape and hired the teachers back, which is what his clients want most.

The Barrington Times reached out to Barrington School Committee Chairwoman Gina Bae and Superintendent Michael Messore seeking comments about the decision. Bae would only say that the school committee is meeting to discuss the decision on Thursday.