Trust members (disguised as bees) will march in Monday's parade

It all began with a non-pollinating cucumber. When Liying Peng noticed the cucumbers in her organic garden off Sowams Road were not producing, she took matters into her owns hands…literally. …

Trust members (disguised as bees) will march in Monday's parade 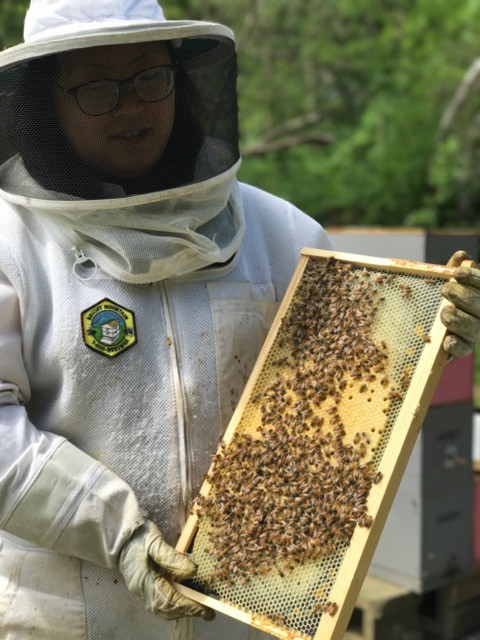 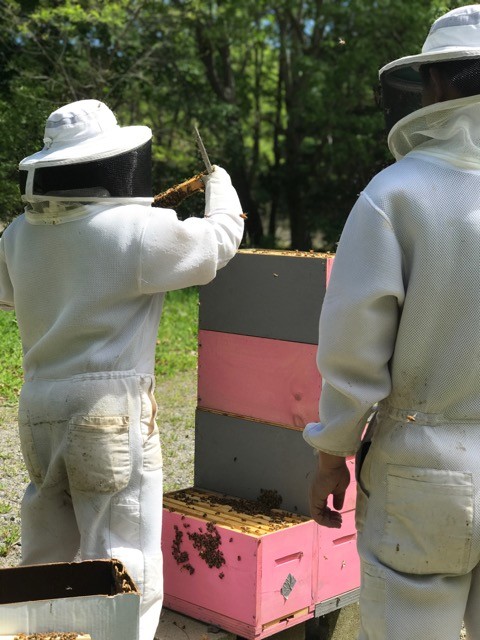 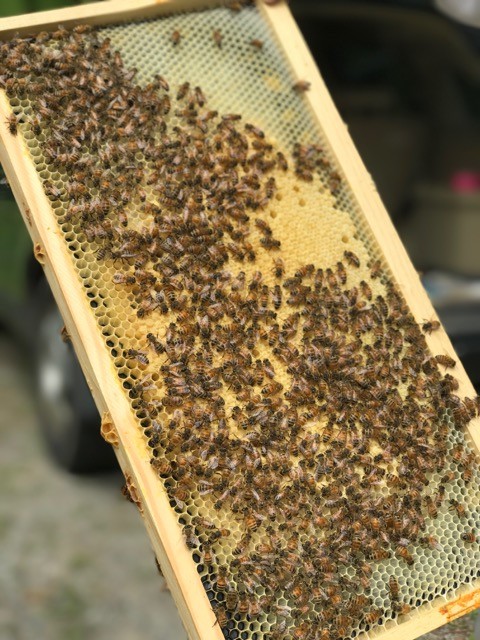 It all began with a non-pollinating cucumber. When Liying Peng noticed the cucumbers in her organic garden off Sowams Road were not producing, she took matters into her owns hands…literally.

She manually pollinated the vegetables by attaching the male flower to the female flower. Realizing that she was doing the work of a bee, she concluded her vegetables would be better off if she brought bees to her garden.

Her journey into beekeeping began in the spring of 2014. She bought a local bee colony, or nucleus colony, which consisted of one laying queen surrounded by 20,000 worker honeybees. Within two years her one colony had grown to 40 through sustainable beekeeping of raising queens. But where does one house so many bee colonies?

A chance meeting at the Barrington Community Garden with Barrington Land Conservation Trust member Cindy Fuller led to a discussion on the need for sunny, open land where Peng’s colonies could thrive. As with many conservation needs in town, the trust was willing and able to find a solution.

Located east of the Providence River on Washington Road is the 17-acre Pic-Wil Nature Preserve. Three meadows comprise the land that at one time housed the Deep Rock Water Company owned by the Wilson family. Later, Peter Picerelli became the proprietor. It was his daughter, Catherine, who in 1987 deeded the land to the Barrington Land Conservation Trust in memory of her father and the Wilson family. Hence the name, Pic-Wil.

The agreement between the trust and Ms. Picerelli states that the land must be used as a conservation site, to keep the land in its natural habitat, and to provide a safe place for the Purple Martins who call Barrington home during the summer months.

There are three meadows on the property, all of which are sunny, open areas, perfect for bees to thrive.

In Peng’s first year of beekeeping, she watched the majority of her colony die. She contacted Rhode Island State Bee Inspector, Jim Lawson, who conducted a thorough investigation. Lawson determined that Peng’s colony, as well as other local beekeepers’ colonies within a 3-mile radius, had all fallen victim to a pesticide used illegally by a small farm. Although the farm was eventually shut down, Peng knew she had to find the open space necessary that would be friendly to bees.

Amy O’Donnell, a current member of the trust who sits on the education committee and the Terrapin Turtle Conservation project, would love nothing more than to bring awareness to the need to help bees and other invertebrates survive.

“Bees pollinate our native plants,” she said. “We need to educate the public on how bees play a huge role in local conservation.” With Peng’s bees living in the open meadows of the trust’s properties, the hope is now to bring back native plant species that will thrive in our community.

An eighth grade biology teacher at Kickemuit Middle School in Warren, O’Donnell encourages her students to ignore the common “ick factor” of aggressive bees and to see them for what they are: The vehicle for our flowering plants, for the food we eat, and for the beauty we enjoy in our open spaces and gardens.

Members of the trust will be marching in the annual Memorial Day Parade dressed as bees. Peng will also discuss the basics of bee biology and beekeeping in a sustainable apiary at the Barrington Land Conservation Trust’s annual meeting on June 15. Bringing bees and the trust together makes perfect sense.

Three years (and many cucumbers) later, Peng is now an eminent beekeeper in the region and a chairperson on the program committee at the Rhode Island Beekeepers Association. With the help of the Barrington Land Conservation Trust, her bees have a place to thrive.