AVTECH was recently awarded the International Trade Council's 2021 Go Global Award for Property Technology, beating out over 6,400 other entrants from around the world. 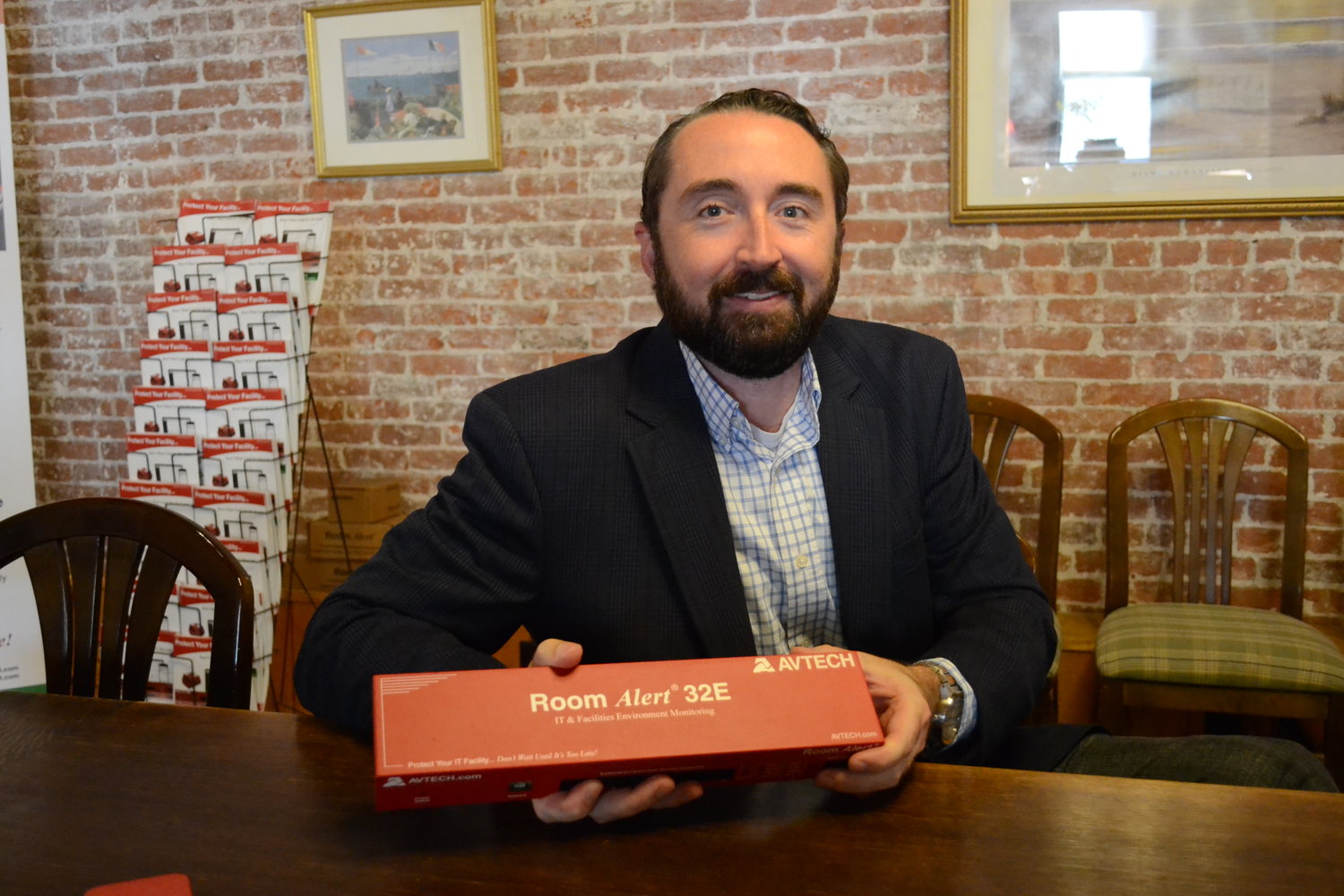 Richard Grundy, President and COO of AVTECH, holds up a Room Alert device, the flagship product of AVTECH which can be found on every continent and in 187 countries around the world.
Ethan Hartley 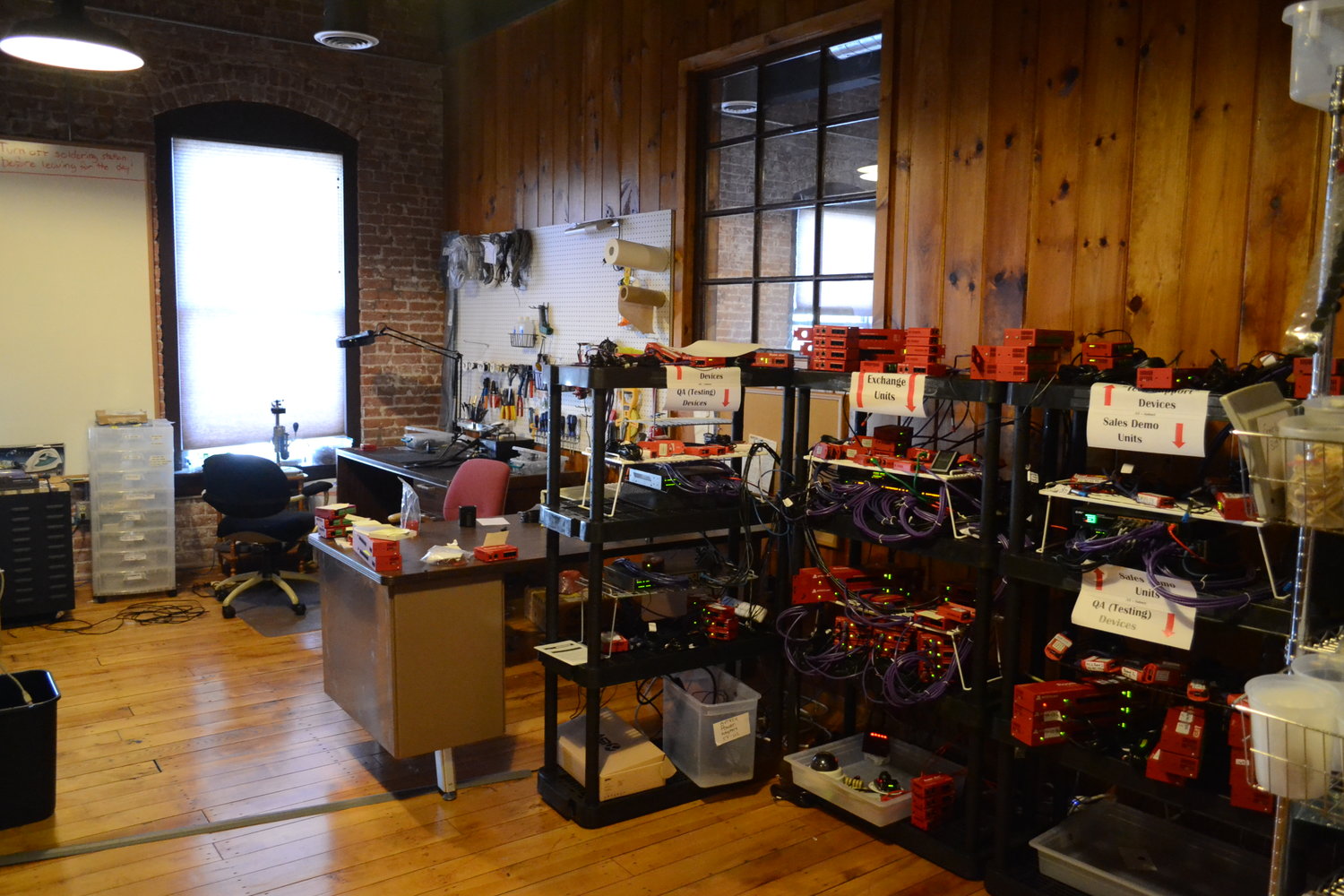 The company’s headquarters in the Cutler Mill in Warren, which they acquired in 2008, has been completely renovated and supports a fully hybrid and remote-based staff of employees.
Ethan Hartley 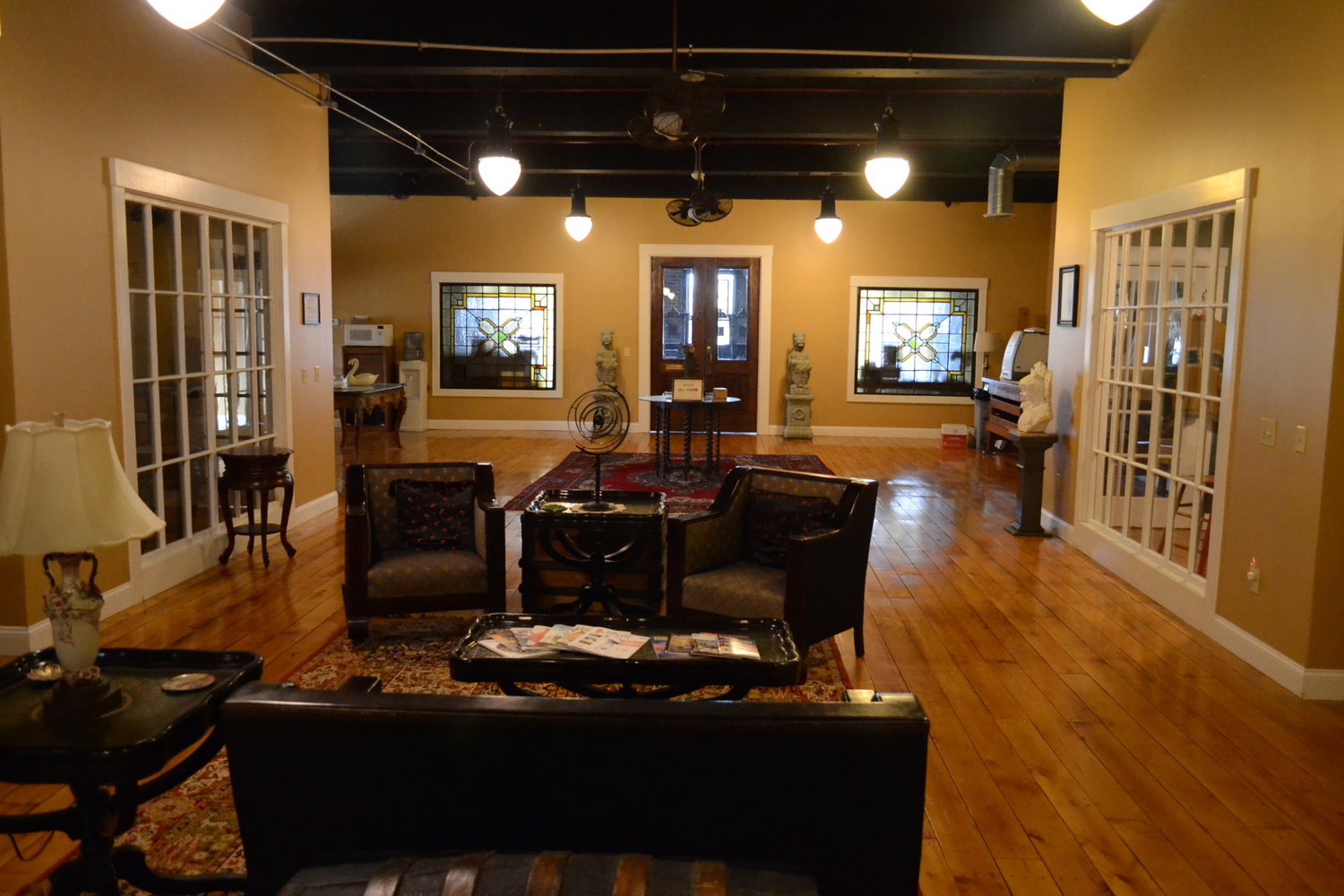 The company’s headquarters in the Cutler Mill in Warren, which they acquired in 2008, has been completely renovated and supports a fully hybrid and remote-based staff of employees.
Ethan Hartley
Previous Next
Posted Wednesday, October 27, 2021 11:40 am
By Ethan Hartley

It’s 3 a.m., and you’re awoken by a phone alert that a presence of water has been detected within your small computer repair shop. Groggily you head back to the store and find a leak spilling into a corner of the waiting area from the residential unit above you. Thankfully, you got there in time to move all vulnerable computer components to a safe place. What could have been a potentially devastating blow to your business has been avoided.

It is this kind of scenario that has launched AVTECH Software Inc. — the Warren-based manufacturer of Room Alert, a product which monitors the environmental conditions of any room it is placed in — from a small computer network monitoring startup in California to a globally recognized brand and perennial award recipient.

A past recipient of multiple trade awards from universities, businesses organizations and Providence Business News, the company was most recently awarded the International Trade Council's 2021 Go Global Award for Property Technology, beating out over 6,400 other entrants from around the world.

“There’s not a single person who hasn’t been in a building when the power goes out or the air conditioner fails,” said Richard Grundy, President and COO of AVTECH. “When you translate the impact of that to the business within that building — especially now, in this global economy where even the smallest business is selling outside their four walls — I think they realized the value that Room Alert could provide.”

AVTECH, founded in 1988 by Michael Sigourney, began manufacturing Room Alert 20 years ago when it noticed a gap in the market for such a device. It became the first product of its kind to reliably perform such a rudimentarily necessary task. Being the first in this space means it is now utilized literally everywhere — from sun-soaked Southern California to the American scientific research facility at McMurdo Station in Antarctica.

“Think about it like insurance,” Grundy said. “You pay for insurance just in case something happens. People are familiar with that for your homes and your cars, but you don’t always think about it for your air conditioning and power and pipes in a commercial setting.”

According to Grundy, Room Alert can now be found on all continents, in 187 out of the 195 countries in the world. The United States military, top financial institutions, and 90 percent of Fortune 1000 companies are among some examples of the entities that rely on its functionality to safeguard their data centers, warehouses and most valuable products. It is used to ensure DNA samples and vaccines are properly stored, and Amazon has Room Alert in every one of their fulfillment centers.

“They standardized around Room Alert several years ago,” Grundy said of Amazon, explaining that they utilize it to monitor temperature and humidity conditions to ensure worker safety. The device also logs historic data so that the company can prove that they have maintained appropriate working conditions consistently.

In the years since its launch, AVTECH has further developed Room Alert to work within a network-based system that can be accessed remotely from secure connections, whether on a hardwired PC or through a user’s phone. Once the physical hardware is installed, upgrades are available to customers for free through firmware updates.

“Throughout the pandemic, we’ve continued not only growing but innovating and launching new products,” Grundy said. The company’s pro line of Room Alert products include cybersecurity and encryption features that are especially coveted in today’s world where cyber attacks are a common concern for government entities and financial institutions.

AVTECH manufactures its products from a factory in west Pennsylvania, and employs around 50 people in total. While maintaining a factory in the U.S. has insulated AVTECH against some of the supply chain complications that have rocked global markets, they are beholden to limitations on microchip production and shipping complications all the same.

“It has required significant investment over the past year to try and stay ahead of it,” Grundy said. “Our products are made up of anywhere from 100 or 200 to 500 individual chips and components that go on a circuit board. What we’re seeing is the lead times on some of those parts, instead of being historically maybe 12 weeks, we’re seeing lead times of 70 weeks.”

While the company thought ahead to stockpile certain components, giving them the ability to fulfill up to a year of orders on time without delays, Grundy doesn’t expect supply shortages and freight complications to let up until 2023 at the earliest.

Grundy said that the lessons learned regarding the fragility of the international supply chain has reinforced the company’s decision to produce its products domestically, which he hopes will correlate into more companies opening factories at home.

“I’m hopeful the last several years has been a wakeup call. It seems like it has,” he said. “We’ve realized in the 20 years since we’ve been manufacturing Room Alert in the U.S., the total cost of manufacturing is often not as black and white as people like to think…if it costs you five percent more to produce here in the U.S., is it worth it? Yeah, we think it is.”

Since COVID struck, AVTECH has also embraced remote employment opportunities for those who want one. They have people working in Rhode Island, Massachusetts, New York, Michigan, Ireland (where they opened their first international distribution facility three years ago), and Dubai.

“What it did was force us to invest in the use of those remote tools at a much higher level. And it’s made us better as a company,” he said, noting an increase in productivity since the pandemic started. “The work will be there. Time with your family, you can never get that back. I feel like people that value their families and are afforded the time, they’re going to be committed to do good work in the time they have available to work.”

Grundy, a Westport native, began at AVTECH as an intern during his days earning a computer science degree at the Wentworth Institute of Technology. He was the company’s third employee, and has risen since to become its president. He now sits on the Board of Trustees at Wentworth.

The company’s investment in the East Bay has been visible, from their purchase and renovation of the Cutler Mills complex in Warren in 2008 (where the company is now located) to Grundy’s personal involvement in advancing student internship opportunities. He recently attended a workshop organized by the East Bay Chamber of Commerce to better optimize the pipeline from local high schools into the professional world.

“Starting as an intern, kind of growing up within the business, I really feel it’s important to give that message to other students,” he said. “You don’t need to go to Silicon Valley or even up to Boston or New York to get into some high-tech jobs. There’s some really interesting work being done right here. The best thing to do is just get involved, get started, be useful, and grow from there.”