Four days, two games, a rain-out, a game suspended by darkness, and a trip to the state tournament hanging in the balance.

Welcome to the District 2 Championship.

On Saturday, the Barrington … 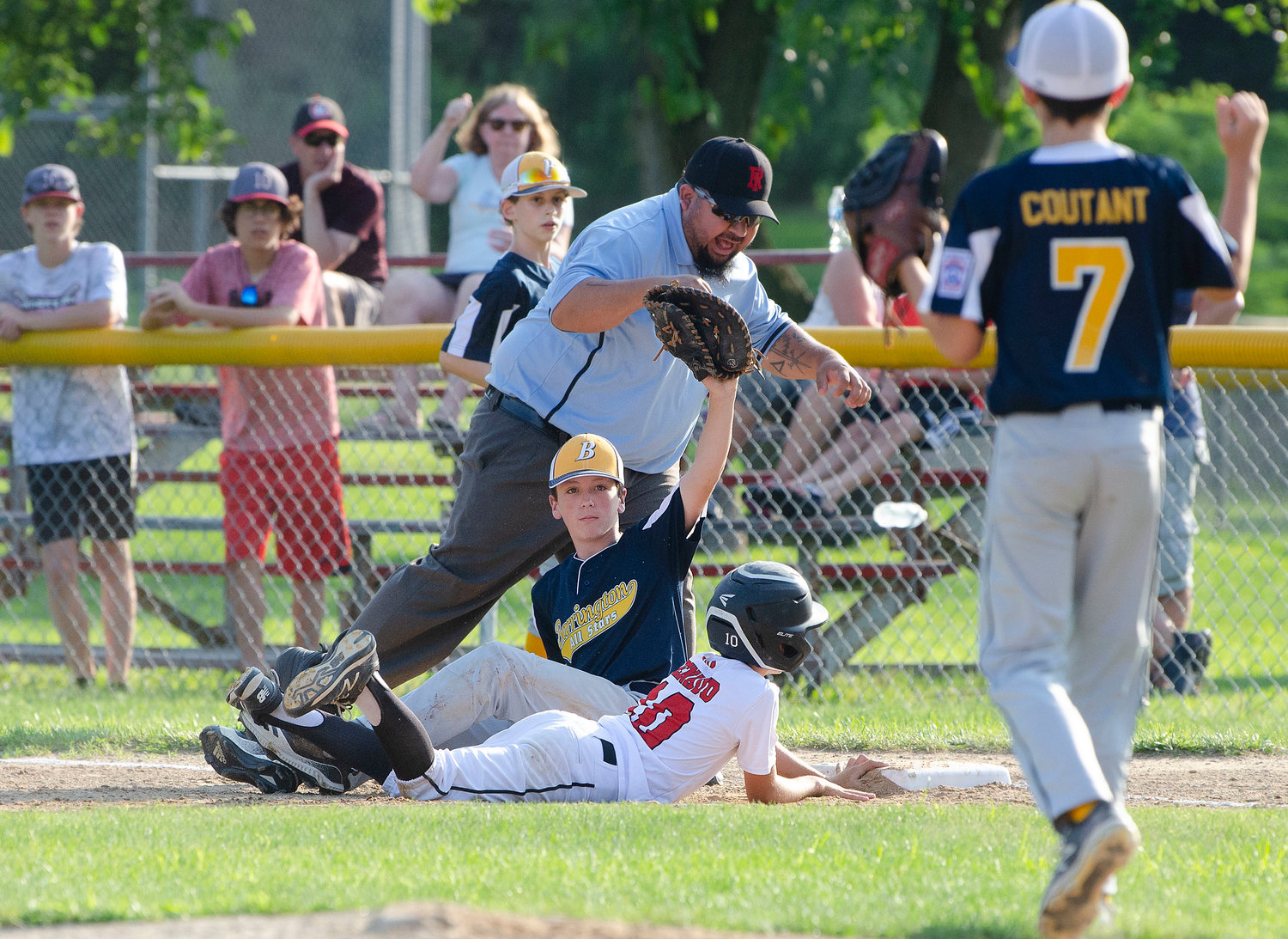 Barrington’s Finn LoVerme delivers a strike during the second game of the District 2 Championship. Barrington and Riverside played until it became too dark, forcing the continuation of the game on Tuesday afternoon.
Photo by Richard W. Dionne Jr. 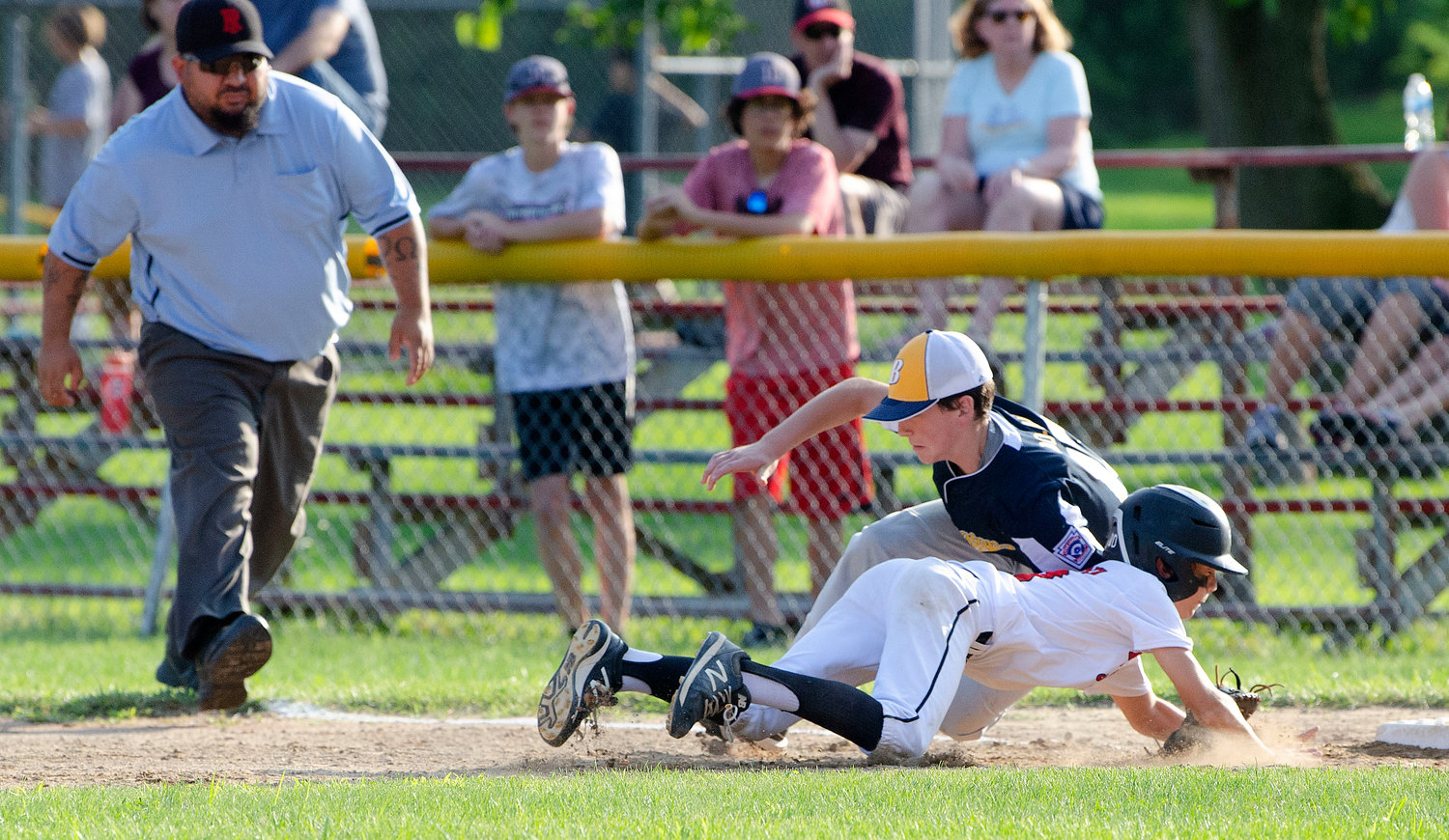 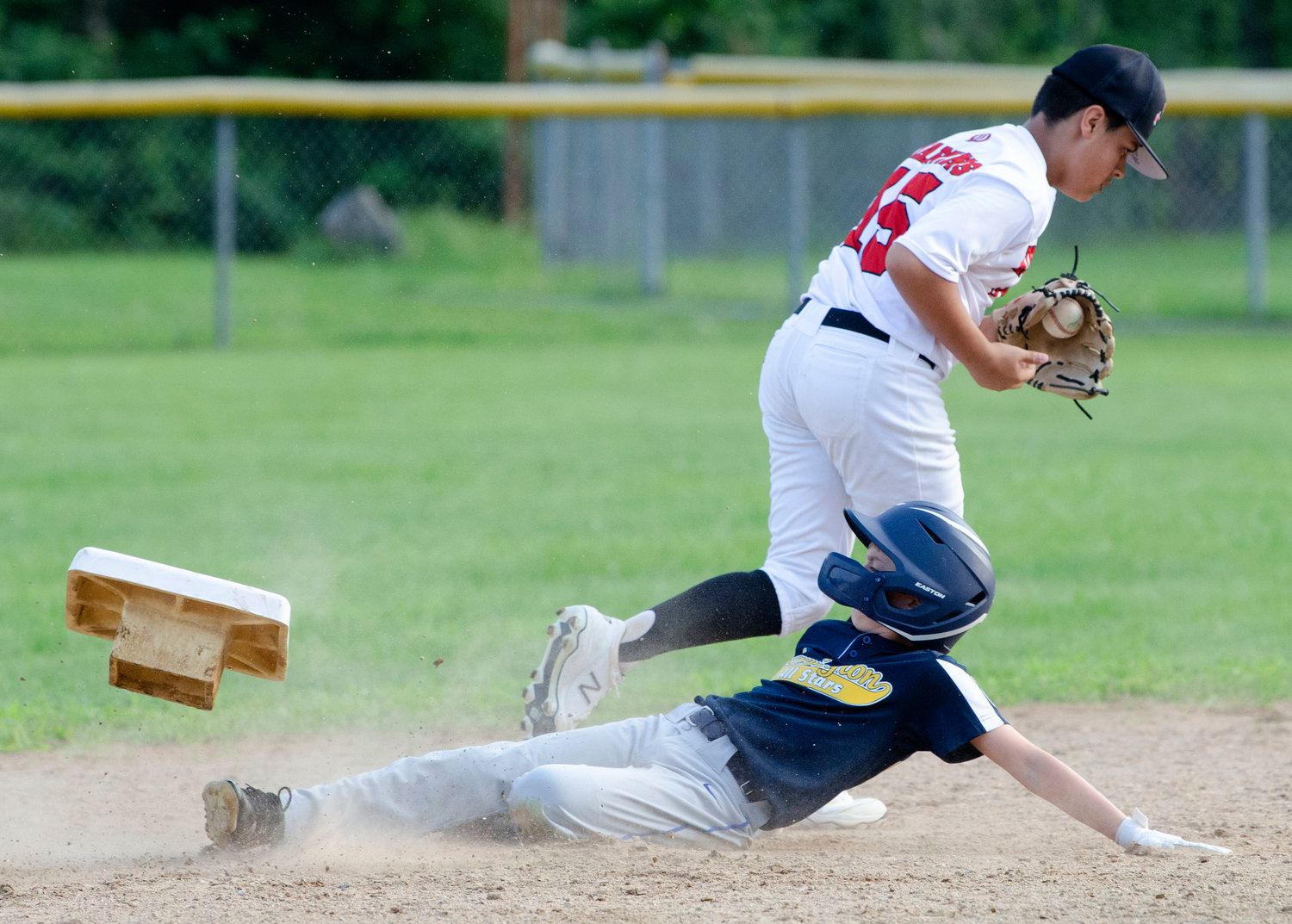 Barrington’s Miles Dolan is out at second during a play in the first game of the District 2 finals. Barrington went on to win the game, 2-0, and force a second, deciding game.
Photo by Richard W. Dionne Jr. 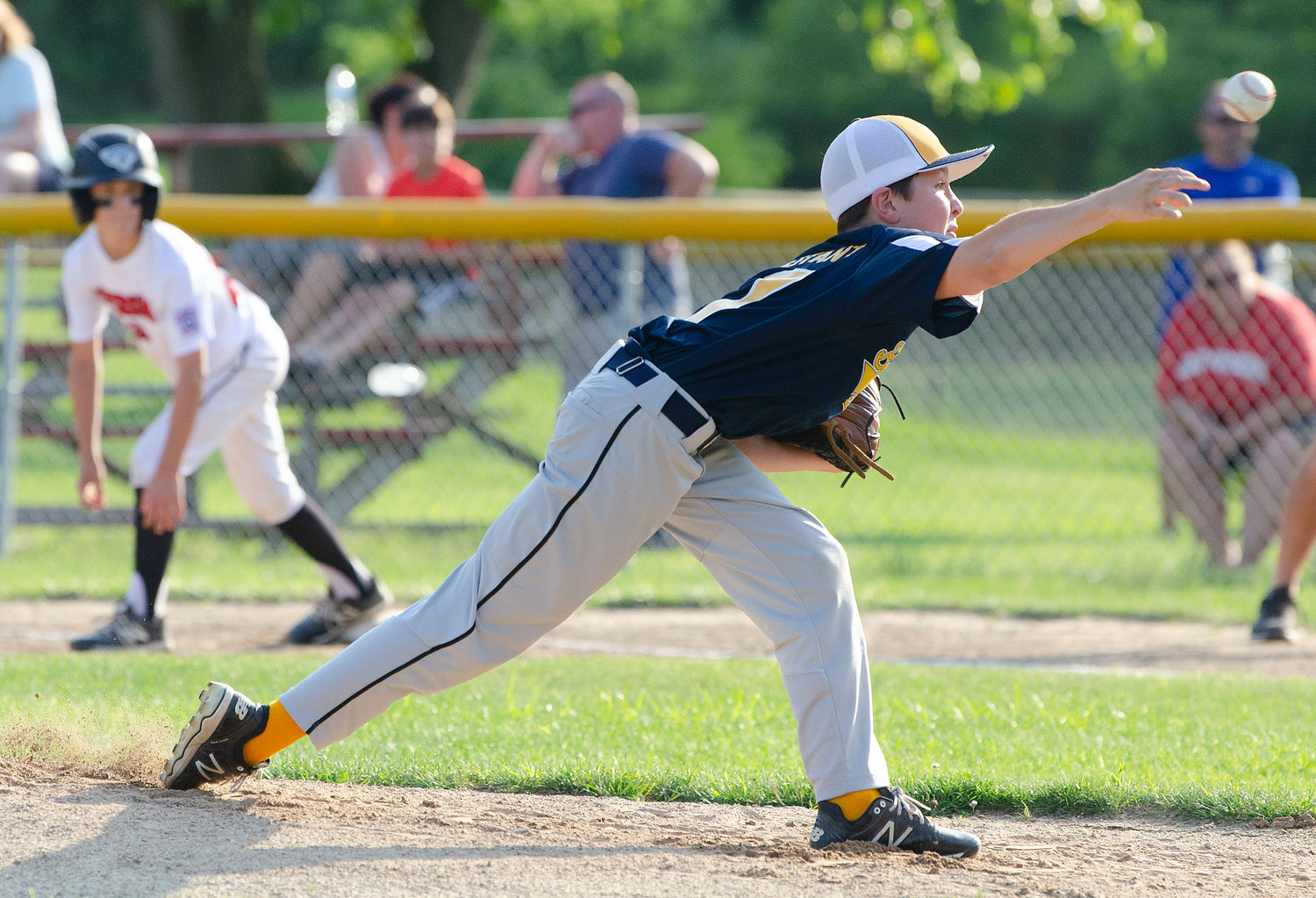 Barrington's Tommy Coutant delivers a pitch during the first game of the District 2 finals.
Photo by Richard W. Dionne Jr. 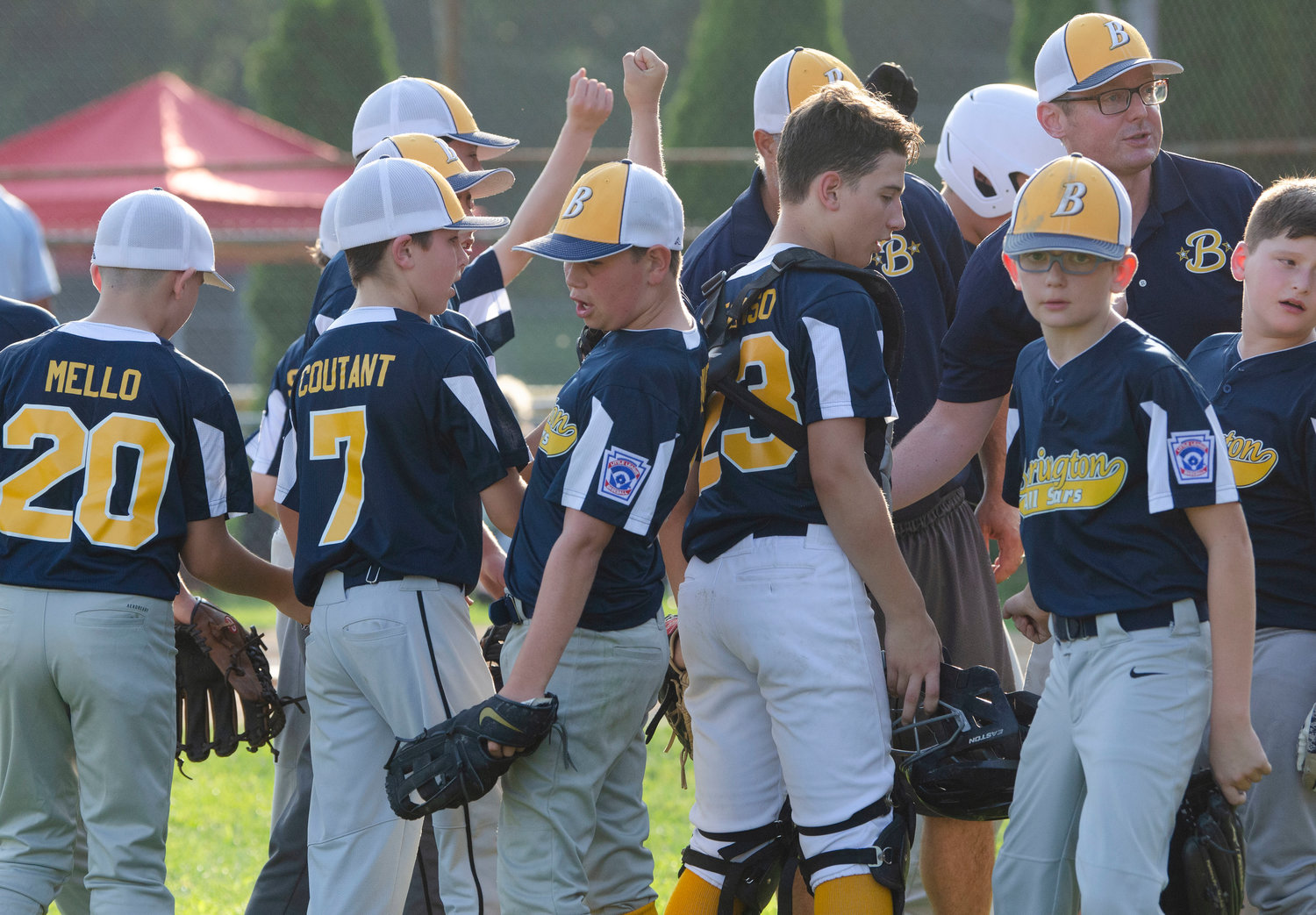 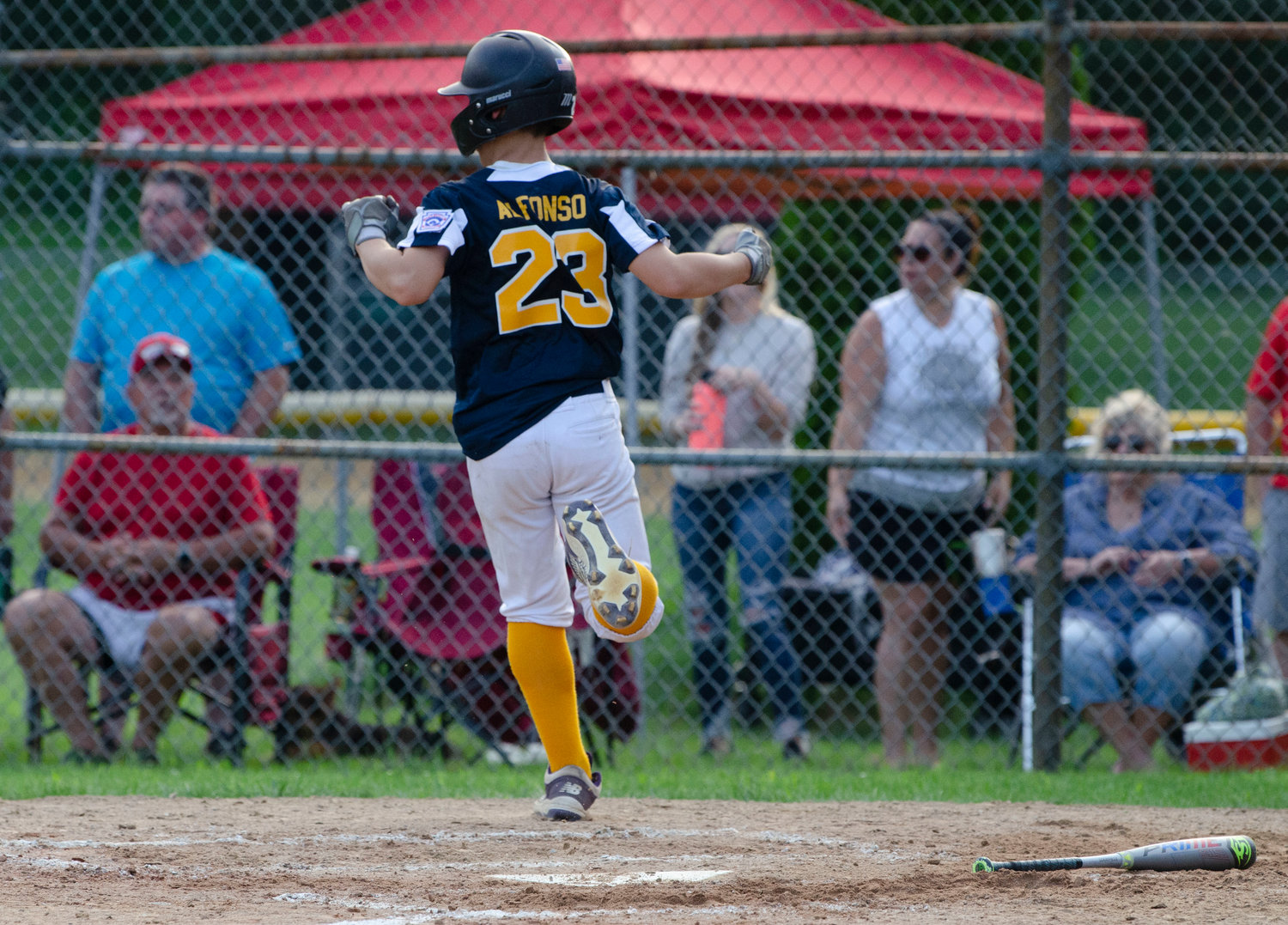 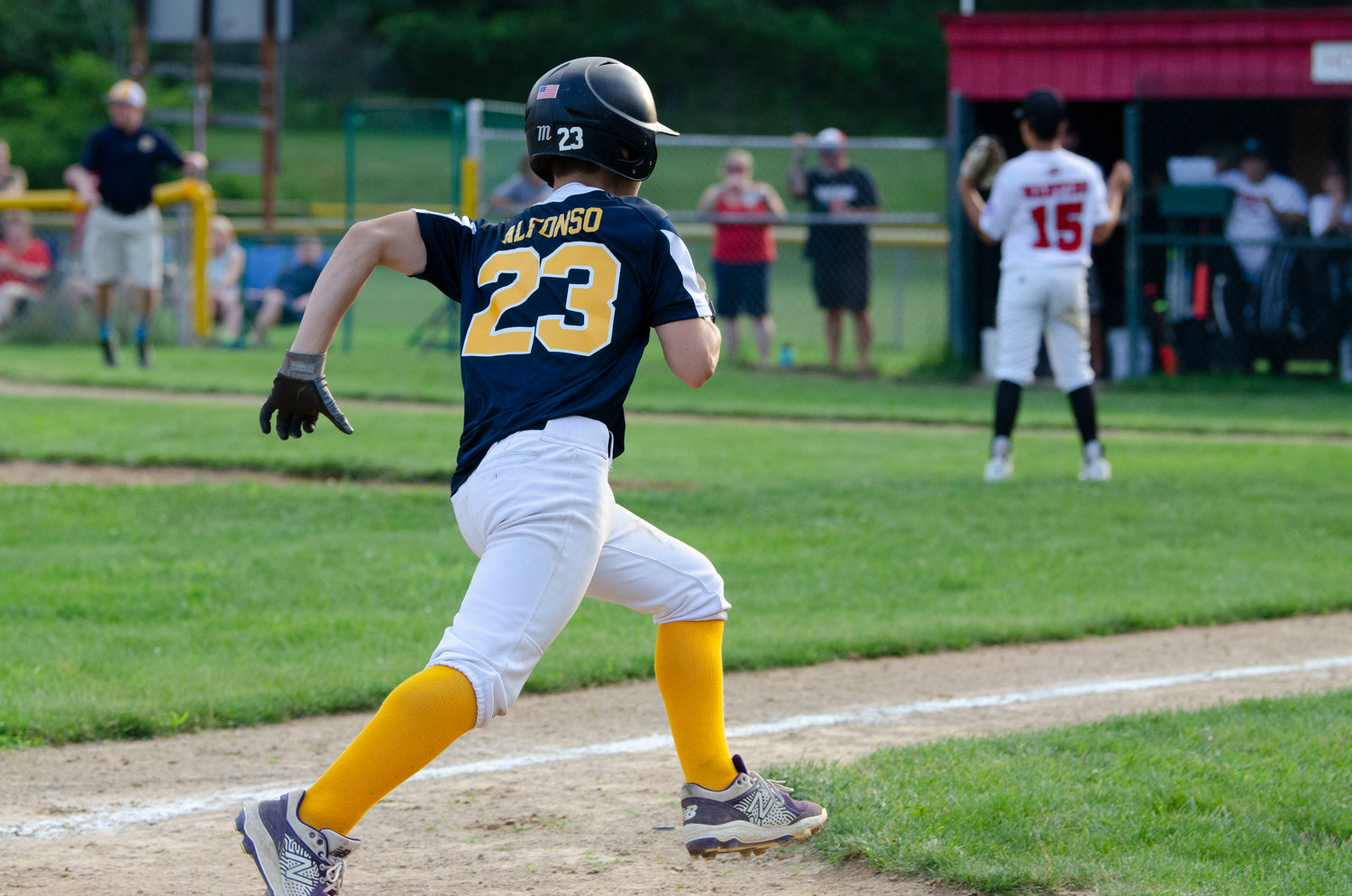 Barrington’s Henry Alfonso rounds third base and heads for home during the sixth inning of the first game of the District 2 finals against Riverside. Alfonso scored, giving Barrington all the runs they would need in the 2-0 victory.
Photo by Richard W. Dionne Jr.
Previous Next
Posted Tuesday, July 20, 2021 12:36 pm
By Josh Bickford

Four days, two games, a rain-out, a game suspended by darkness, and a trip to the state tournament hanging in the balance.

Welcome to the District 2 Championship.

On Saturday, the Barrington Majors Division All-Star baseball team was scheduled to play against Riverside in the District 2 Championship game. But heavy rain and lightning forced officials to postpone the game to Sunday night.

The two teams met on Sunday at Forbes Field on the Wampanoag Trail and Barrington scratched its way to a 2-0 win in a pitcher’s duel — Barrington’s Tommy Coutant outlasted Riverside’s JJ Renaud, who hit his limit in pitches and was forced to step off the mound. Barrington capitalized on the pitching change, scoring two runs in the last inning against the reliever.

The win forced a second, deciding game for the District 2 Championship on Monday, as Riverside had not lost prior to Sunday’s showdown.

Initially the game was scheduled for Sherwood Field in Barrington, but then moved to Chianese because Sherwood was too wet. Then, a few hours before game-time, Barrington town officials closed all athletic fields because of rain showers on Monday.

Little League officials moved the game back to Forbes Field in Riverside, but umpires suspended the game for darkness before a winner was crowned. Barrington held a 5-4 lead in the eighth, but Riverside has bases loaded with two outs in the bottom of the inning, and the batter facing a 2-and-2 count.

“I might have a stroke before tomorrow,” joked Barrington Manager Will LoVerme in a text message late Monday night.

Barrington’s All-Stars have been on a wild ride for the past few weeks. The team opened the District 2 tournament with a 3-1 loss to Rumford, but rebounded by defeating Little Compton 7-0. Then, in a game that took two days to play because of a lightning storm, Barrington defeated Middletown 3-2.

A few days later, Barrington defeated Darlington 1-0, scoring the game-winning run in the bottom of the sixth inning when Rocco DeFonseca stole home on a wild pitch. Two days later, Barrington’s bats exploded for four home runs in a 7-2 win over Warren and one of the hardest throwing pitchers in District 2. And last Wednesday Barrington cruised to a 12-2 win over Rumford in the elimination bracket final.

With the score 0-0 in the sixth inning, Riverside’s JJ Renaud ran out of pitches. Renaud had been masterful up to that point, keeping Barrington’s potent lineup off-balance and off the scoreboard.

Barrington’s Henry Alfonso singled in the top of the sixth and reached second on a wild pitch by Riverside’s reliever. With one out, DeFonseca swung and missed a third strike, but the ball skittered past the catcher and to the backstop. Alfonso sprinted to third base, and when the catcher fired the ball to first base in an effort to get DeFonseca, Alfonso bolted for home. Alfonso scored and DeFonseca added Barrington’s second run of the game a short time later. The two-run lead was enough for Coutant, who retired Riverside in the bottom of the inning, sending Barrington to a 2-0 victory.