Advocates hopeful that bridge barrier bill will soon save lives

“That bridge at the end of town? That's a loaded gun."

Advocates hopeful that bridge barrier bill will soon save lives 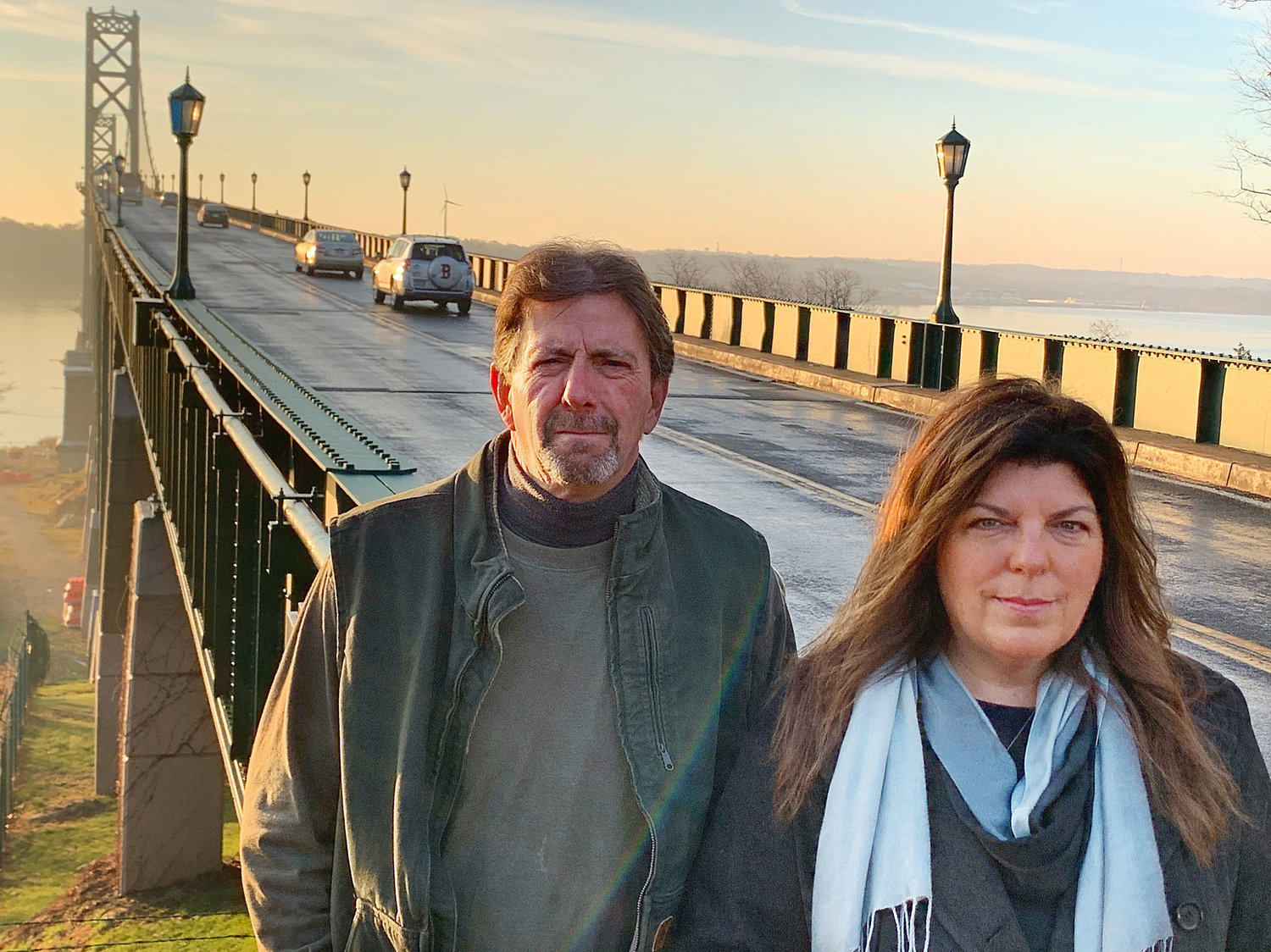 Bryan Ganley (left) lost a close friend to suicide. Melissa Cotta (right) tried to help but could not stop a man from jumping off the Mt. Hope Bridge. Together, they’re asking for suicide prevention barriers on the bridge, along with barriers on Rhode Island’s two other main bridges.
Richard W. Dionne Jr.
Posted Wednesday, February 16, 2022 2:24 pm
By Christy Nadalin

Editor’s note: This article discusses death by suicide. If you or a loved one are considering suicide, please consult the resources listed at the end of this article.

Bristol resident Bryan Ganley was about 21 years old when he lost his best friend to suicide. Tiverton resident Melissa Cotta was crossing the Mt. Hope Bridge in February of 2016 when she attempted to stop a man from jumping from the span. It was 30 seconds of her life that she can never forget, and it did not end as she hoped.

Their shared experience led the two to co-found Bridging the Gap for Safety and Healing, an organization devoted to promoting suicide prevention barriers on local bridges.

Ganley, a longtime Samaritans volunteer, knows that when someone calls and they are feeling desperate and suicidal, you take away the means for them to harm themselves. "If someone tells me that they have a loaded gun in their lap, or I can hear them fumbling with a bottle of pills, I tell them to take that and put it in the other room. You instantly cut the risk in half.
"That bridge at the end of town? That's a loaded gun."

Ganley and Cotta have been tireless in their commitment to seeing barriers erected on Rhode Island’s largest bridges, all of which come under the direction of the Rhode Island Turnpike and Bridge Authority (RITBA). They have enlisted legislative support in Rep. Joseph Solomon and Sen. Louis DiPalma, who just this month reintroduced bills that would direct the Department of Transportation, in conjunction with RITBA, to erect barriers on the Mount Hope Bridge, the Claiborne Pell Bridge, and the Jamestown Verrazzano Bridge.

"A barrier would force a pause," said Cotta. "And a pause is the opportunity to create an intervention. If you can create a second of delay, you have the time to ask a person what they want to do tomorrow."

According to DiPalma, the steep decline in the numbers of deaths from Cape Cod’s Bourne and Sagamore bridges since the installation of barriers, shows that barriers are clear deterrents. He knows that is not enough, but it’s a start. “We also need to address the mental health issues that lead to suicide, but we need to start by taking away this platform,” he said.

The identical House and Senate bills call for a proposal to be in place by April 1 with construction commencing by Jan. 1, 2023. DiPalma referred to the April 1 date as “sporty” but says he wants to push the issue. “The time is now, we can’t wait any longer,” he said. Indeed, last March 25, when introducing the bill, DiPalma was asked how many people had lost their lives on the bridges. Within a couple of days, before he found an answer to return to the committee, another person had died. That weekend was actually the beginning of a rash of deaths over the next several months, including two from the Mt. Hope Bridge on the Fourth of July weekend alone.

“I’m cautiously optimistic that we’ll get it over the goal line” this session, said DiPalma of the bill, who also said that its failure to progress last session was not a matter of opposition but rather figuring out how to allocate the funding the state received from the federal infrastructure bill. “Lori (Caron Silveira, RITBA Executive Director) has been very supportive and collaborative,” he said.

According to DiPalma, they already know that the engineering and design work will cost about $1.5 million, and RITBA has already identified a vendor, Atkins, a bridge engineering firm that was one of 4 to submit proposals solicited late last year. According to the minutes from the Feb. 15 RIBTA board meeting, Silveira indicated that when she and Jeff Goulart, RIBTA’s Chief Financial Officer, presented the proposal before the Senate Finance Committee, they received positive feedback about the Authority’s prospects of receiving the funding through the ARPA.

“Our bridges need to be safe for everyone who uses them,” said Silveira in a statement. “We are working with legislators and advocates to secure funding to ensure that adding barriers does not negatively impact the structural integrity of the bridges and are prepared to move ahead with an engineering study as soon as funding is identified.”

A computer engineer himself, DiPalma appreciates the importance of getting the engineering work right, but notes that the barriers won’t be breaking new design ground, citing the vertical netting barriers recently installed on the Sunshine Skyway Bridge in Tampa, Florida. Based on the $3.5 million price tag of that project, and considering Rhode Island has several bridges to protect, DiPalma estimates the total cost will come in at about $30 million.

According to Cotta, Bridging the Gap’s efforts have found support in the more than 4,100 signers to their online petition, launched last summer. “Our next goal is 5,000,” she said. “The comments written on the petition in support of barriers are heartbreaking….just a fraction of what the families, friends, neighbors, co-workers and first responders experience, not only when a death from a bridge occurs, but for a lifetime.”

‘We will be a model for the world’

According to Ganley, who in addition to being a longtime Samaritans volunteer is an OSHA-trained 15-year member of the Heat and Frost Insulators Union Boston, potential falls from bridges would not be tolerated for workers of the RI Bridge and Turnpike Authority or RIDOT, “Falls would be prevented through the installation of temporary barriers and employee equipment designed to prevent falls, injuries and deaths. But if something were to go wrong, the project would not be allowed to continue until the cause was thoroughly investigated and mitigated through proper protections.”

In their statement calling for the temporary barriers, Ganley and Cotta wrote, “As we have stated many times, there is much about suicide which is unpredictable. However, we actually have the tools, following federal and state safety standards, to stop accidental and deliberate bridge deaths. In the interim, while we wait for permanent barriers to be installed, the time is now to make our bridges safer by installing temporary barriers. We implore our leaders, the Governor, the House Speaker and Senate President, the board of the Rhode Island Turnpike and Bridge Authority, and the RI Department of Transportation, to not let one more death happen and to order temporary barriers installed today. When we do this for Rhode Island, we will be a model for the world.”

What to do in an emergency
Is a friend or loved one threatening self-harm?

Hotlines in the U.S.
All hotlines listed below are free and confidential.

Copline
(800) 267-5463
Set up for police officers, staffed by retired police officers who volunteer their time, this hotline provides crisis intervention 24/7.