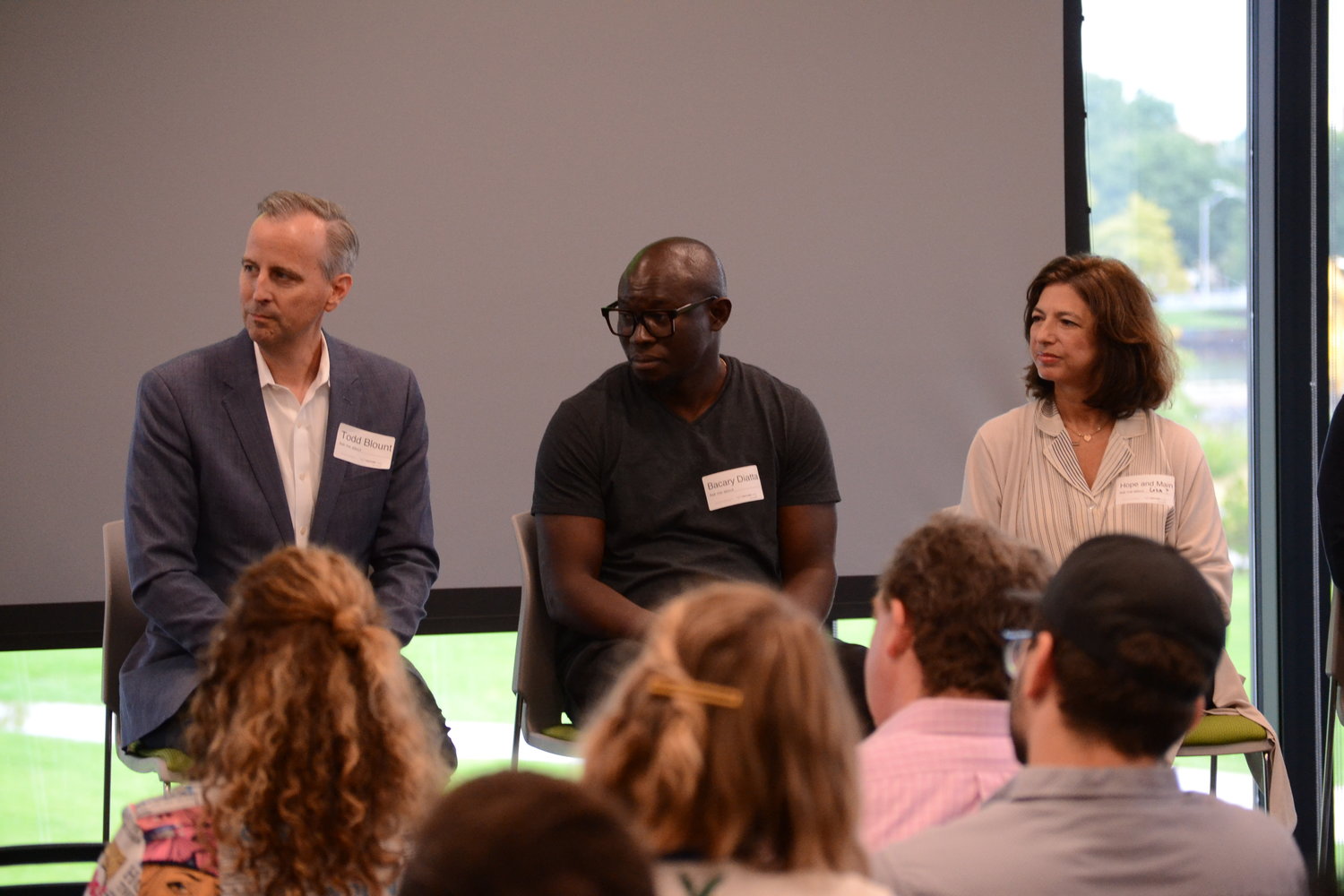 Todd Blount, president of Blount Fine Foods, Bacary Diatta, a Senegal native who started a successful hibiscus-based food company out of Hope & Main, and Lisa Raiola, founder of Hope & Main in Warren, provided thoughts during a panel discussion at the CIC in Providence.
Ethan Hartley 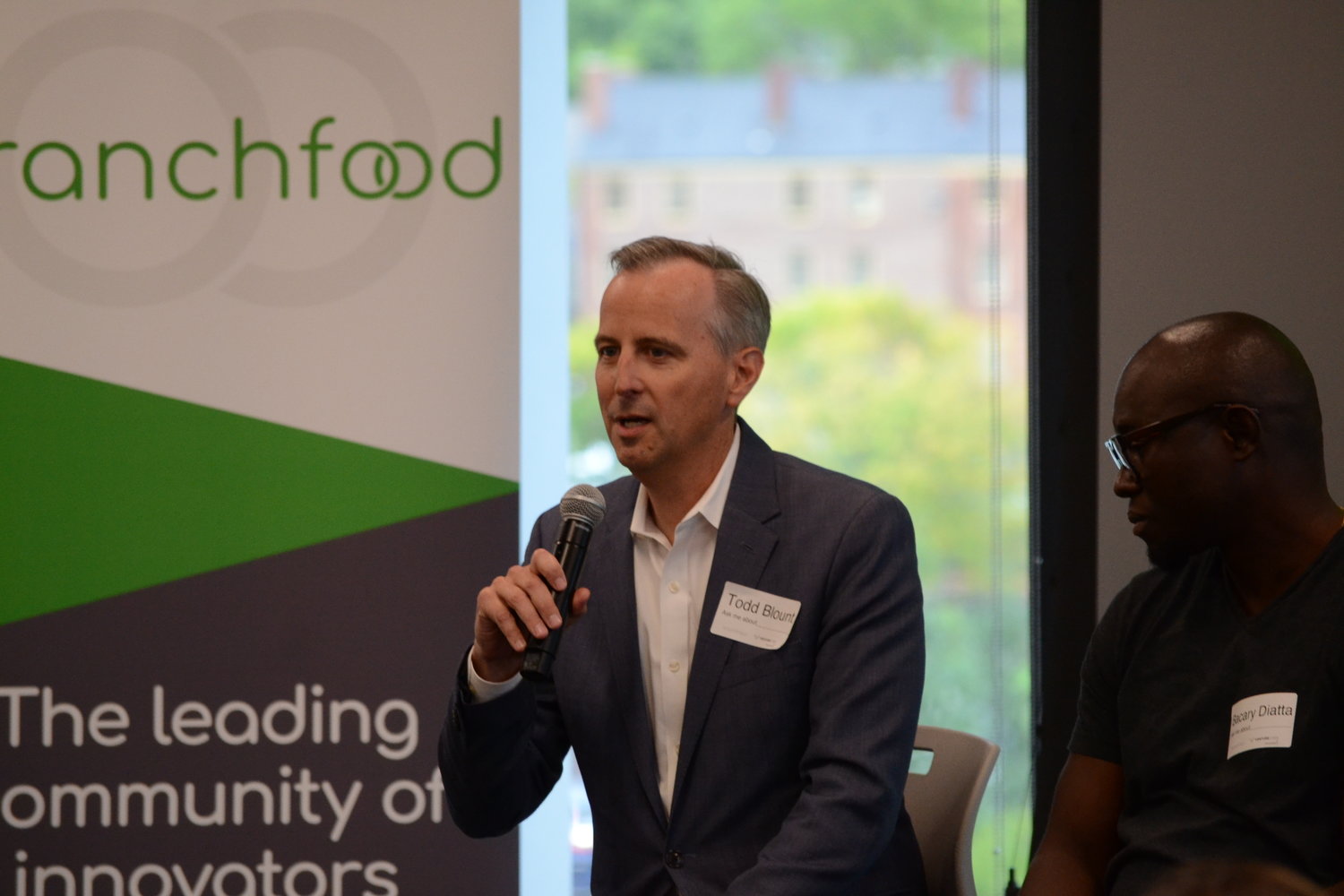 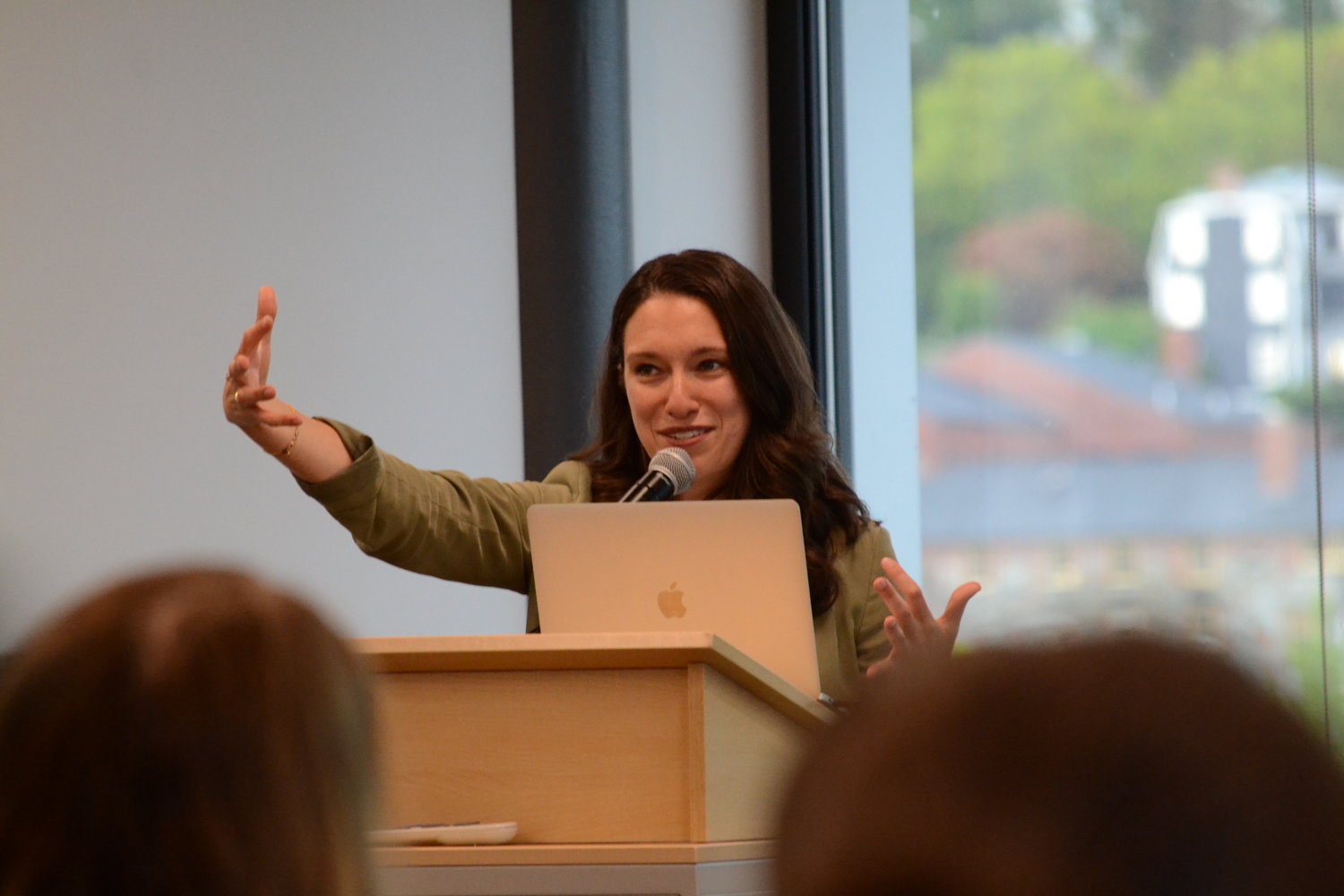 Branchfood Founder and CEO Lauren Abda speaks at the CIC in Providence at the event welcoming the food accelerator group to Rhode Island.
Ethan Hartley 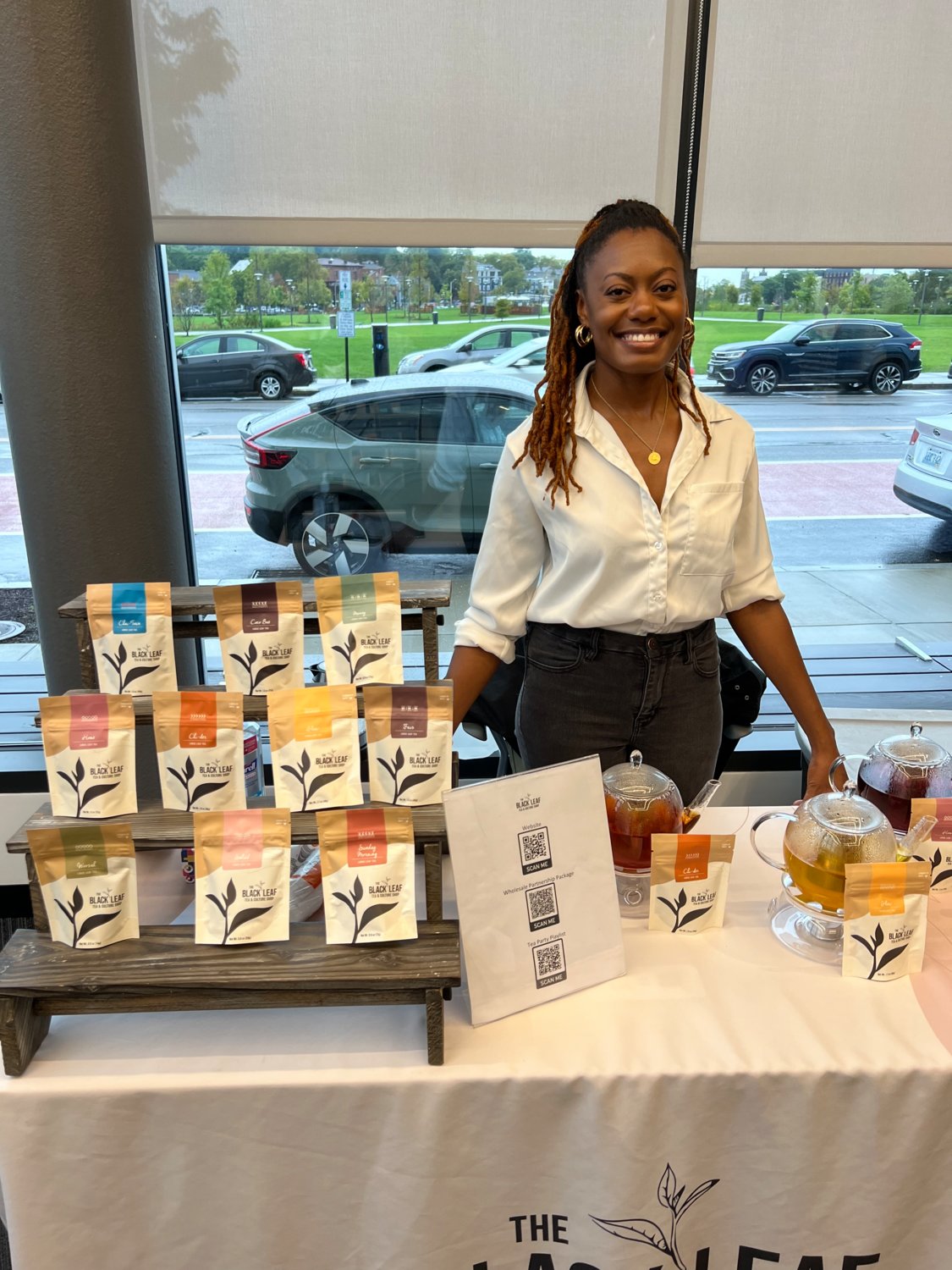 Although there were only a handful of food businesses set up at the Cambridge Innovation Center (CIC) in Providence on Thursday giving out samples, many of them had one thing in common. They got their start at Hope & Main, which provided traction entering the competitive food industry and a chance to succeed.

Although the festivities in Rhode Island’s capital were centered around the CIC’s partnership with Branchfood — a food accelerator that began in Massachusetts and seeks to take already-succeeding food businesses and boost them to the so-called “second stage” through investment and expanded opportunities — the celebration might as well have been a reunion for the many Hope & Main businesses that were represented among the audience.

“We’ve created a unique problem here to be honest with you,” said Lisa Raiola, Hope & Main founder, who was part of an expert panel for a Q&A session at the launch event. “Hope & Main created this shared use infrastructure, which very much lowered the barriers to entry for many businesses.”

“Shared use infrastructure” relates to Hope & Main’s business model, which provides rentable kitchen spaces — including a space for hypoallergenic and gluten-free baking, something essential for a business like Elizabeth Fradin’s “Beth Bakes” company, who was also on hand at the event giving out her gluten-free crackers. It also references providing start-ups access to expert advice and food markets for exposure, and monetary capital to grow.

But, Raiola continued, there has been a gap in the state’s ability to further foster these upstart companies. While over a half of the businesses that start up at Hope & Main are still in existence today, Raiola worries about their ability to continue growing and “graduate” out of Hope & Main.

“It’s sort of like building a new university…and now that whole group of people need a graduate school and there isn’t one,” she said. “That same access to second stage is not there in Rhode Island when we think about contract manufacturing…How do we create that second stage so that the businesses we de-risked at Hope & Main can move into that second stage without leaping into the valley of death, as I call it.”

Enter Branchfood
If things go according to plan, Branchfood is the missing piece towards starting to solve that problem, bringing with them the ability to attract a wider range of investors to bolster successful, small food businesses that are ready to take the next step towards larger production and expansion. They received a Rhode Island Commerce Network Match Grant earlier this year to assist in that effort.

Branchfood founder and CEO Lauren Abda gave an introduction to the company and how they came to make a deal with the Providence CIC, where they will work out of. The company touts having supported more than 800 food founders across the region and globally, working with “both start-ups and established global food corporations in the consumer products, agricultural, and tech spaces, as well as leading academic institutions and governments,” per a press release. “To date, Branchfood's sister company, Branch Venture Group, has invested more than $3.3M in 15 early-stage food startups.”

“At Branchfood, we bring food founders and leaders together with corporate partners, investors, and experts to create a platform for collaboration and provide strategic advice to help the sector grow and thrive,” said Abda. “We are thrilled to expand this work into Rhode Island, where we hope to bolster the state’s already rich food ecosystem to help solve the food industry’s most pressing challenges while also positioning Rhode Island to become an internationally-recognized food innovation leader.”

Raiola mentioned how this next-step support was essential to the prolonged health of small food businesses, as too much expansion too quickly often results in overreaching and, eventually, collapse.

“You can’t just skip those steps from being here at Hope & Main and then all the sudden you’re at Costco. That can’t really happen, that shouldn’t happen,” Raiola said. “You need to take those next steps and so together, I feel like that’s what we need to do — to build that scaffolding.”

A food powerhouse in the making?
When asked what has helped make Rhode Island a place ripe with talent in the food industry, Raiola touted the state’s multiculturalism.

“The first thing that comes to my mind is diversity. I'm sorry about this Todd [referencing fellow panel member Todd Blount, president of Blount Fine Foods], but I think there can be a caricature of Rhode Island as just clam cakes and chowder, and it's more than than that here,” she said. “We’re not a melting pot, we're a salad of individual ingredients that really stand out from individual communities.

“So my friend Bacary [Diatta, founder of Kassumay LLC, a Hope & Main startup] came from Senegal and he brought his food culture and his food ways to Rhode Island and he found a path to bring that to market. I just have to look around this room and I see Brazil. I see the DR. I see Cambodia,” she continued. “This is the dream of so many immigrants to this country and particularly in the food space. This is the path to economic mobility for people and when you provide economic mobility for individuals, you provide economic development for your community.”

“Rhode Islanders are extremely loyal to their own,” he said. “So we're hopefully also welcoming with open arms to new members who come into the food community. So that works out great, particularly in stage one, because you know that your local consumer base is going to be super loyal just because you're connected to Rhode Island.”

Branchfood will next host a session called the “Ins and Outs” of Scaling a Food Business in Rhode Island on Oct. 6, followed by programs including Branchfood’s signature event, Community Table, and financing and investment opportunities for startups and investors in Rhode Island. Additionally, Branchfood and the Cambridge Innovation Center will begin welcoming entrepreneurs and food teams to the CIC (225 Dyer Street, Providence) to work and collaborate later this fall. Learn more about Branchfood at branchfood.com and branchventuregroup.com.