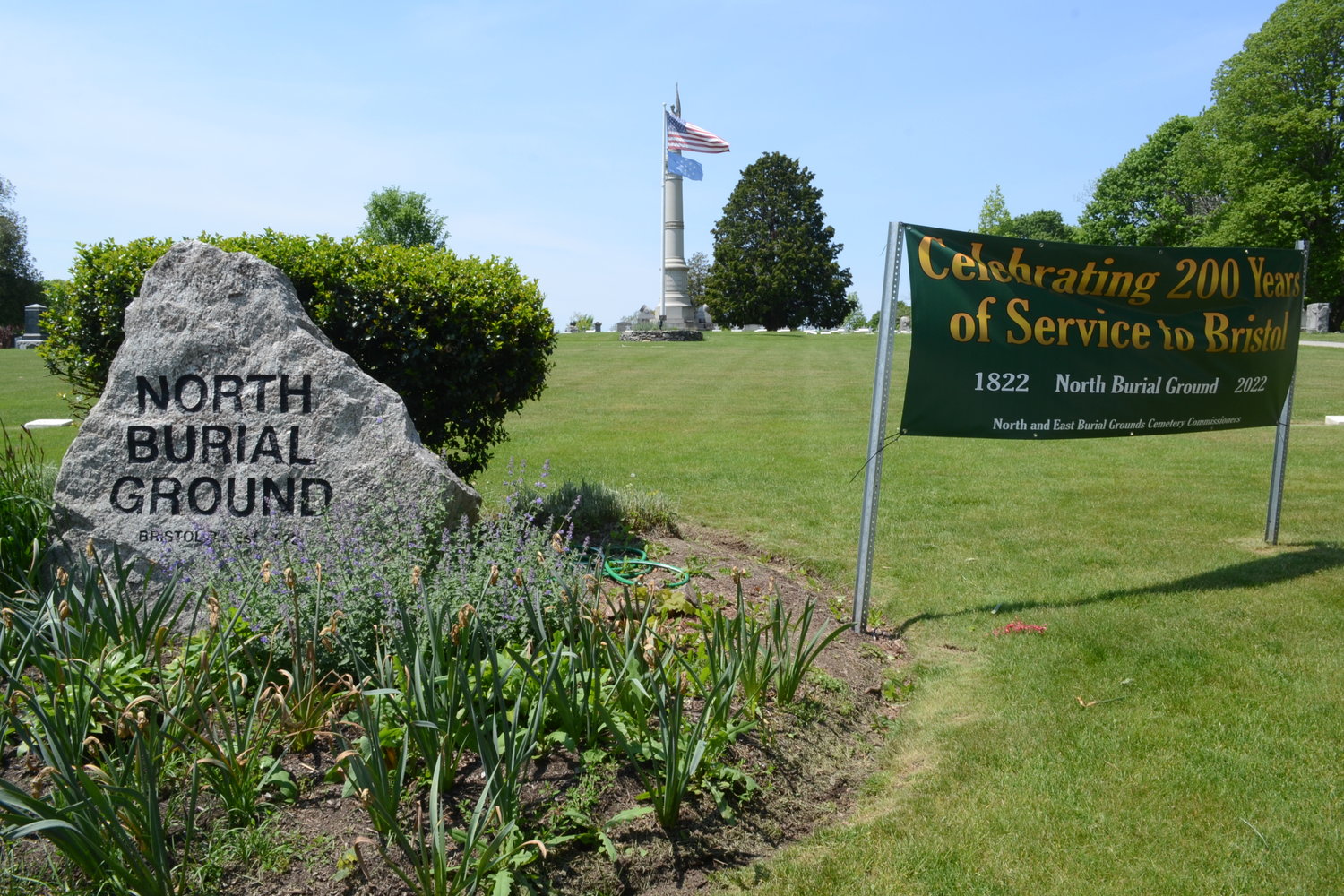 The North Burial Ground was established in 1822, and celebrates its 200th birthday this year. The Civil War Monument can be seen in the background, which was dedicated in 1902.
Ethan Hartley 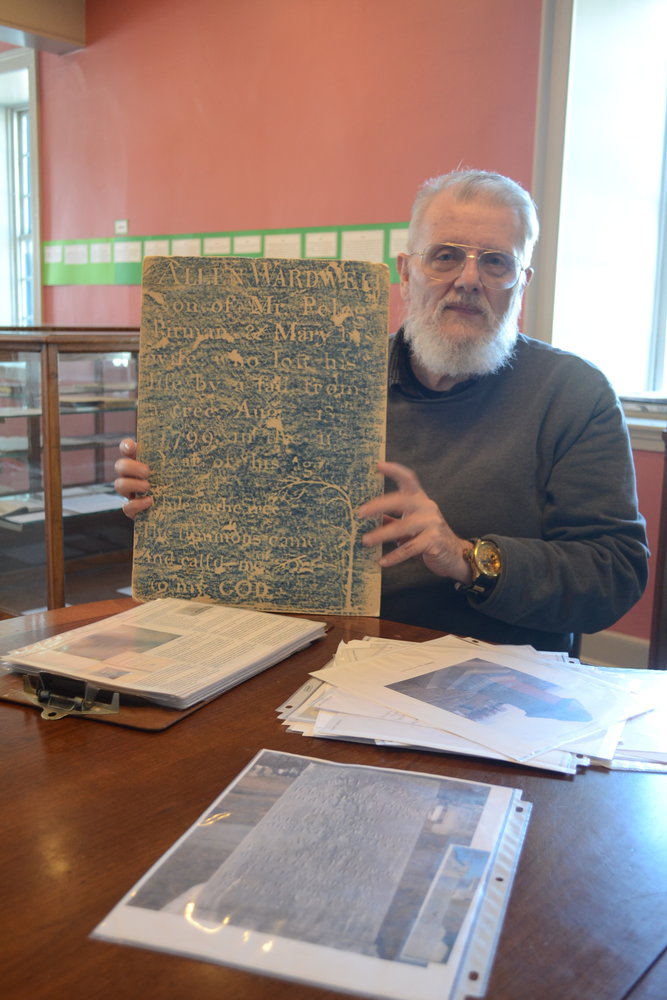 Rei Battcher, Historian/Librarian for the Bristol Historical and Preservation Society, holds up a gravestone rubbing of an interesting grave from the North Burial Ground, which tells the cautionary story of how a local 10-year-old boy, Allen Wardwell, lost their life after falling from a tree.
Ethan Hartley 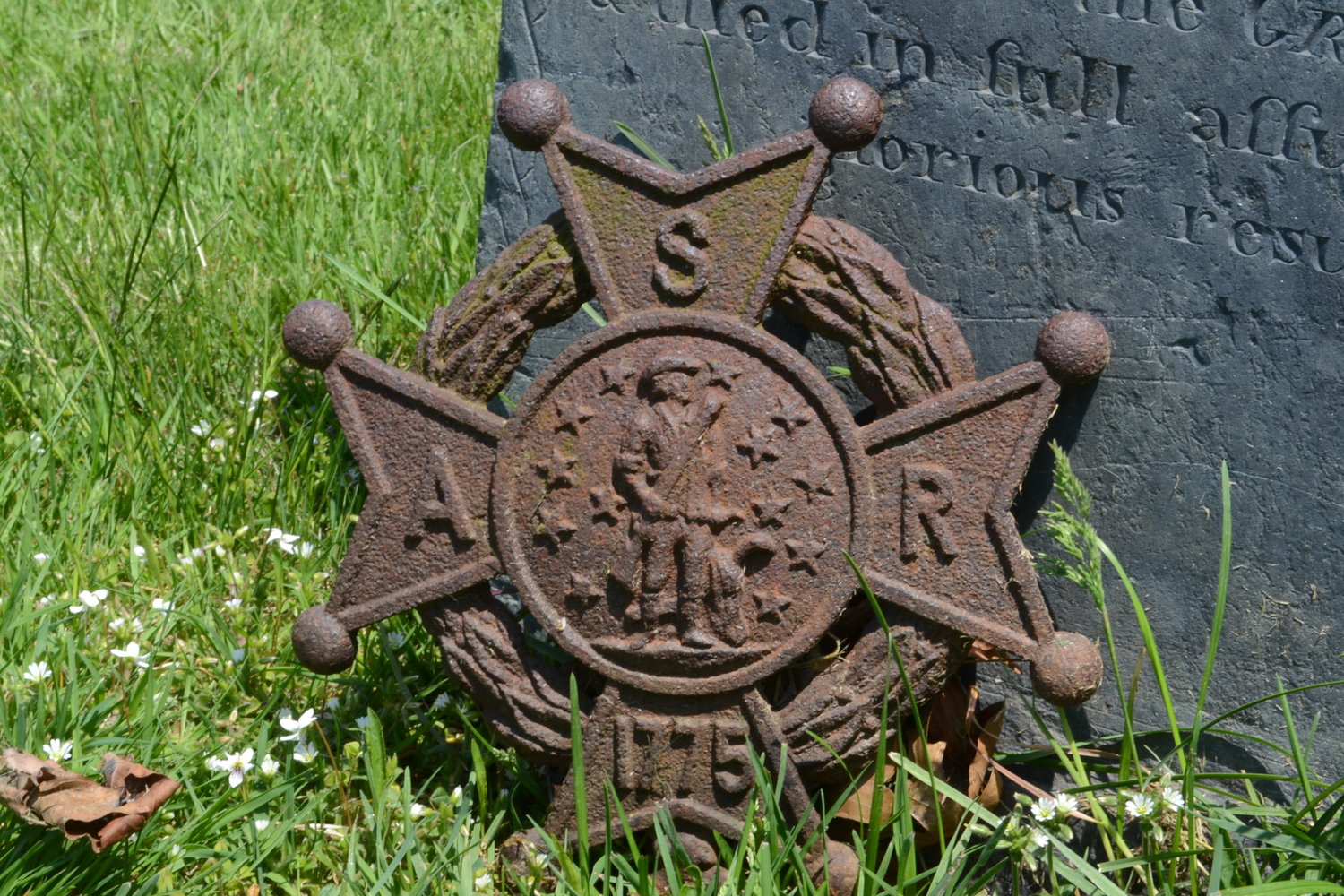 Gravestones marked as burial sites of Sons of the American Revolution are common throughout the nearly 40-acre cemetery. In total, there are over 3,200 buried military veterans at the North Burial Ground.
Ethan Hartley 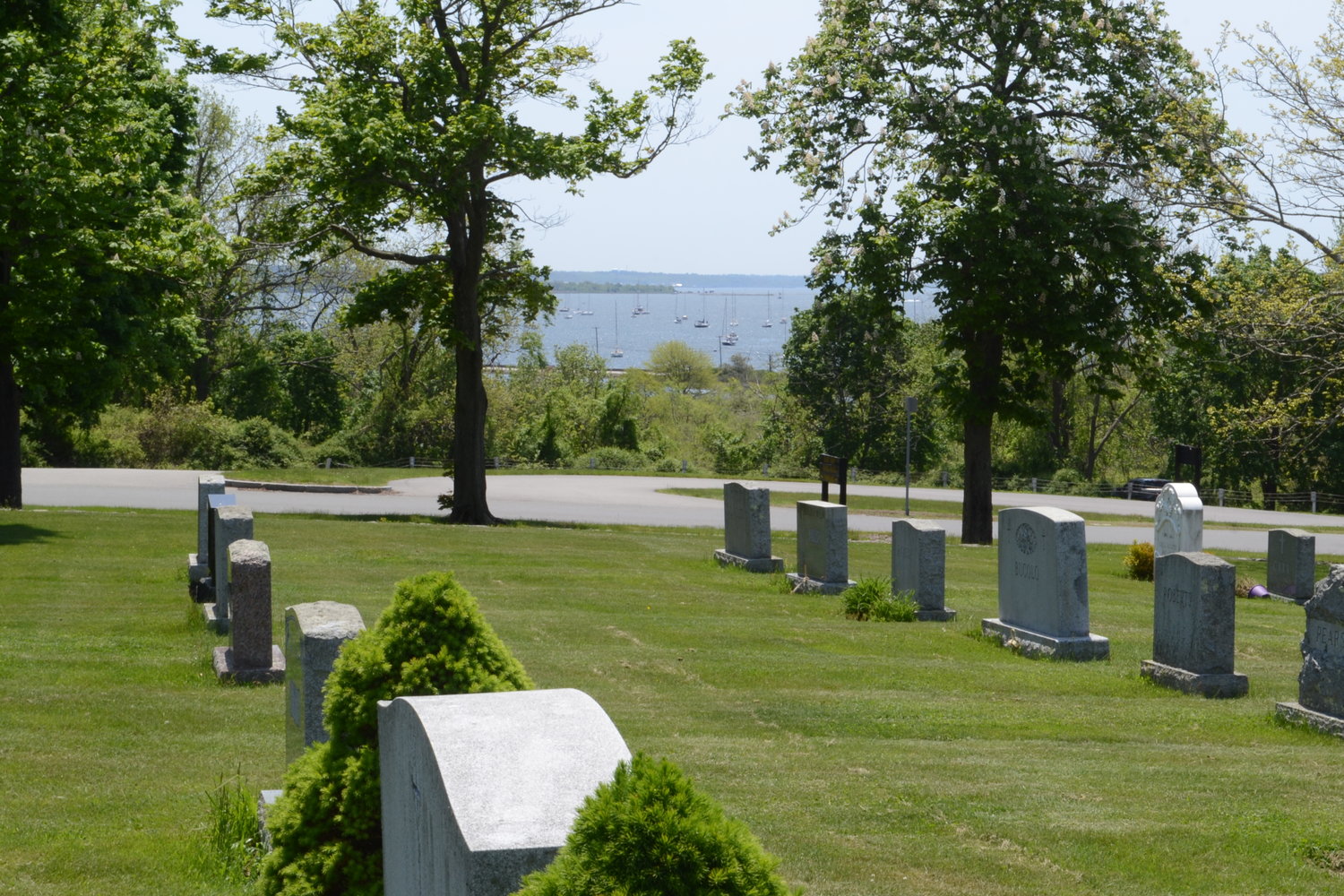 A pleasant view of the bay seen from the western end of the cemetery.
Ethan Hartley 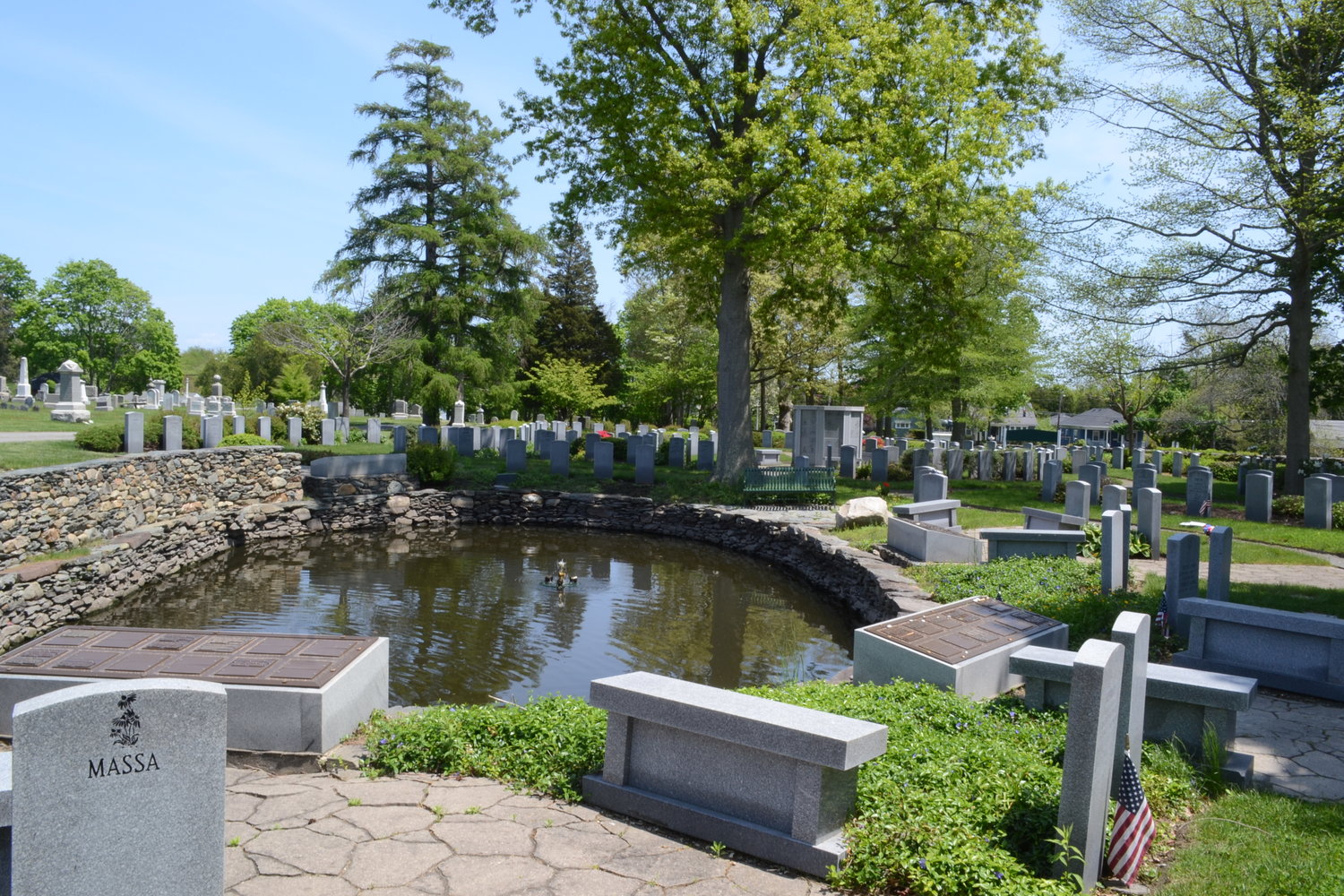 Dedicated to the late Ralph E. Peters, the cremation garden at the North Burial Ground was finished in November of 2008, and has enough space to hold the cremains of 1,400 individuals as opposed to 50 traditional graves.
Ethan Hartley
Previous Next
Posted Thursday, May 26, 2022 3:00 pm
By Ethan Hartley

A suspected witch, a seafaring adventurer, a quad-lingual spy and a Medal of Honor recipient. What do they all have in common? They are all Bristol residents — interred in their final resting place at the North Burial Ground, the sprawling, almost-40-acre swath of hallowed ground which is celebrating its 200th birthday this year.

One of 11 historical cemeteries in Bristol, the North Burial Ground may very well be the most visible and prominent among them. Situated atop a hill that overlooks Bristol Harbor and abutting the entry road for Colt State Park, it is most certainly a landmark for those traversing Hope Street.

More importantly, particularly to those who spend many volunteer hours advocating and caring for the grounds, is the fact that approximately 14 acres of the cemetery remain available for burials. The cemetery will inter more than 100 people this year alone — the recently deceased sharing subterranean land with people who habituated Bristol hundreds of years ago. It is estimated that around 10,000 people, of all different faiths and backgrounds, are buried at the site in total.

“I think it’s important for the legacy of the community, and from a comforting perspective for the families who are grieving,” said Charlie Cavalconte, Chairman of the North and East Burial Grounds Commission for the past 12 years during a recent walk through the grounds. He points to a gravesite from a death that occurred a few years back, decorated with fresh flowers in remembrance, which sits next to a grave from over a hundred years ago. “It’s an intergenerational kind of importance that this piece of real estate has.”

Notable features and history
By digging into the history of the North Burial Ground, Bristol Historical and Preservation Society Historian/Librarian Rei Battcher helps to establish how different life was back in the days when the cemetery first began.

One fun tidbit: The town used to contract out bids for farmers to pay for the right to use the cemetery as a pasture for sheep and goats, which provided a mutual benefit of organic landscaping and income for the town.

The New North Burial Place, as it was originally referred to, began receiving bodies in 1824 for burial. Back in those days, when a burial lot cost as little as $6, the town actually didn’t require purchasers of lots to register the grave sites in official records, which eventually caused some confusion regarding who was buried where. By 1860, all burial lot sales were recorded.

In 1872, the grass-topped receiving vault that can be seen from Hope Street was constructed, interestingly enough with more than $1,200 of the cost incurred through donations from the town’s residents. This vault was used to store bodies once the ground became too frozen to dig graves, holding them in stasis until the spring thaw — another historical problem taken for granted since the onset of modern digging equipment.

The cemetery’s tallest structure, the Civil War monument, was dedicated on May 30, 1902, and sculpted by Edward Ludwig Pausch, a Danish sculptor famous for war monuments, equestrian statues, and a death mask of assassinated President William McKinley.

In 1908, the brick building seen towards the front of the cemetery near Hope Street was built. Originally serving as a chapel, it transitioned to becoming storage space since the 40s, and now serves as the office of Enzly Ramsay, the North Burial Ground’s caretaker.

One hundred years later, in November of 2008, the North Burial Ground’s cremation garden was dedicated in honor of the late Ralph E. Peters, former chair of the North and East Burial Grounds Commission. The peaceful space provides enough room for 1,400 cremains, as opposed to what would fit only 50 traditional graves. Identical grave markers with unique sand-blasted lettering is provided by Warren Monument Co.

Throughout the grounds visitors can see a wide array of headstones, from centuries-old slate slabs with detailed messages about the deceased, to impeccable black granite slabs that mark modern family grave plots. In the past decade, spearheaded by Bill Chittick, a longtime member of the Bristol Tree Commission, volunteers have planted as many as 130 new trees throughout the cemetery.

Notable people buried
To walk through the North Burial Ground is to walk through history. “The world we live in today was left to us by those who came before,” said Battcher, who himself has many generations of relatives buried in the cemetery.

One of those, his great uncle, Chandler Hall Coggeshall — the namesake of Coggeshall Farm — also holds the distinction of being one of the founding members of the agricultural college that would later become the University of Rhode Island.

The cemetery is home to the final resting place of countless numbers of interesting people who lived fascinating lives. For example, Simeon Potter, a sailing captain born in 1720, once signed a young man named Mark Anthony DeWolf while on a voyage in Guadalupe. DeWolf would later marry Potter’s sister, Abigail, who became the progenitors of the famed DeWolf dynasty.

Private George Waters Diman, a Bristol resident of the early 19th century, had an appetite for adventure that couldn’t be denied. He signed onto a ship just one day after his mother, who had forbidden that action, died. He would go on to sail throughout the world, including one unbelievable voyage where he left Bristol on a ship only to become deathly ill in South America. He spent two years recovering before making his way to Hawaii, only to find that original ship he departed Bristol on was also docked there by sheer coincidence, which took him back to Bristol.

There are many notable women, including Gladys Brightman, the first woman from Bristol to be elected to the state legislature in 1944, and Alice Bell Morgan, who galavanted around Europe and became a leading financial mind after breaking into the stock market, a rare feat for a woman at the time. Another is Rachel Bourne, who died in 1844 at the age of 76. She has a notable passage in the Bourne family genealogy which states, “A well documented family legend says that Rachel was a witch, and was nearly executed for casting evil spells on the family of the first wife [of her husband, Shearjashub], Ruth Waldron Bourne.”

“You can’t make this stuff up,” laughed Battcher.

Military veterans of note include Herman Michael Tessler, a Russian-born man who emigrated to America when he was just 16, and enlisted during the onset of World War 1. He again enlisted during World War 2, and became a valuable asset as a spy, due to his ability to speak French, Russian, German and Italian. He retired as a Captain in the U.S. Army.

Perhaps the most prominent veteran buried is Frank T.O. Walker, who earned the Medal of Honor for heroism during the Philippine-American War. His citation reads, “Under heavy fire of the enemy he rescued a dying comrade who was sinking beneath the water.” He died in 1904, and his grave is marked by a red white and blue pole.

Of course, these names are a mere fraction of the interesting stories to be uncovered. Cavalconte said that the commission is in the midst of digitizing the entire cemetery to better organize where people are located, which should be going online somewhat soon.