PORTSMOUTH — Something big is coming to the Melville marina district.

On Thursday, Aug. 19, the Zoning Board of Review unanimously approved Safe Harbor Marinas’ request for a … 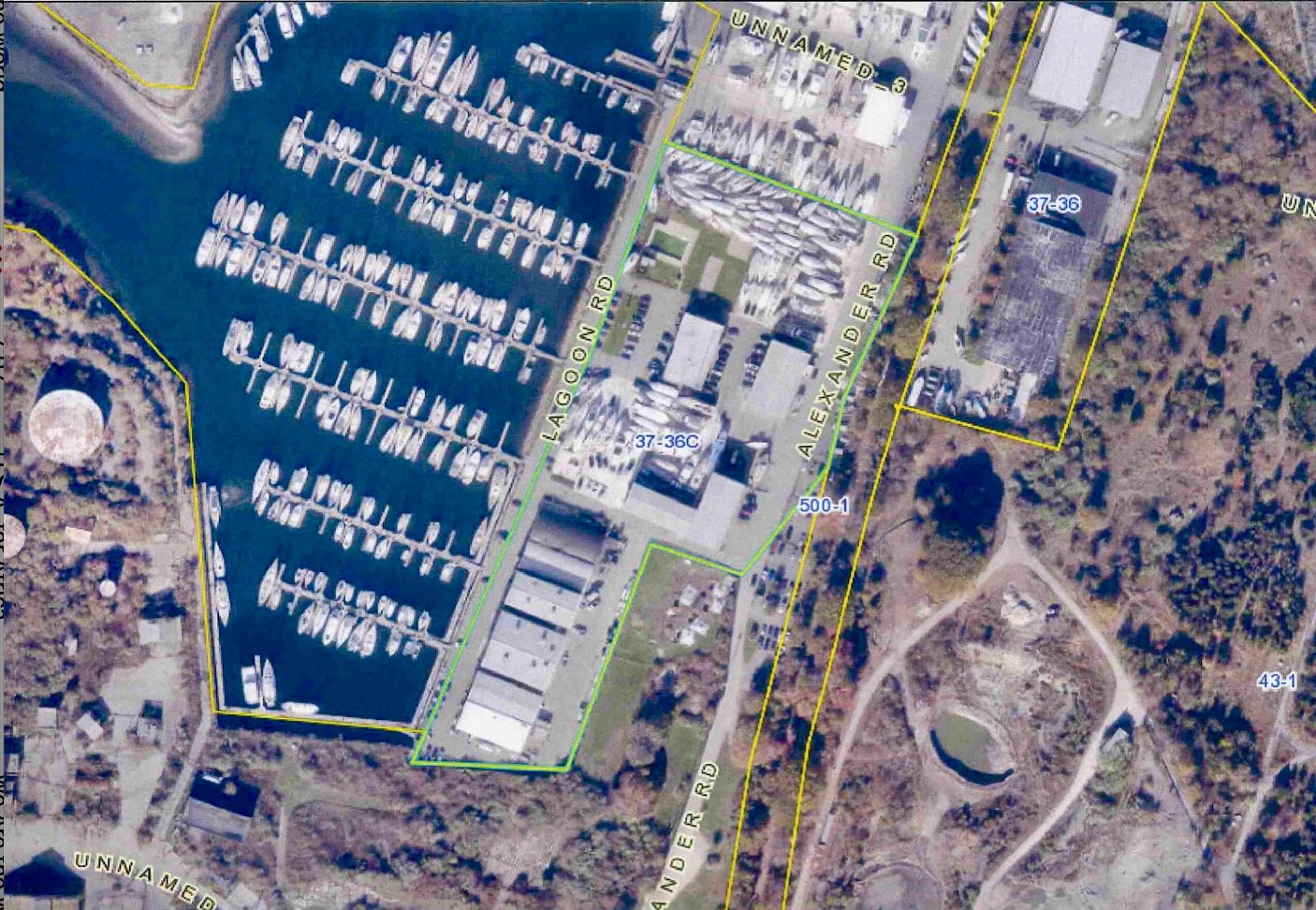 Safe Harbor’s new 70-foot-high storage building would be located at the top of this aerial photo, where boats are now being stored outside.
Posted Wednesday, September 1, 2021 9:25 am
By Jim McGaw

PORTSMOUTH — Something big is coming to the Melville marina district.

On Thursday, Aug. 19, the Zoning Board of Review unanimously approved Safe Harbor Marinas’ request for a dimensional variance for building height to construct a 70-foot-tall boat storage facility at its 1 Lagoon Road facility.

Under the zoning ordinance, the allowable maximum height is 35 feet, so the company was seeking a 35-foot variance.

The original petition before the board had asked for a 30-foot height variance to allow for a 65-foot-tall building, said Danielle Dufault, an attorney representing Safe Harbor

“After punching the numbers, we had to make a change. We apologize to the board, but we had to make sure we had the accurate numbers before proceeding,” she said.

“The way the industry is going, boats are just getting bigger,” he explained, adding that the storage building would be used year-round, “not just seasonally.”

Safe Harbor’s storage facility at Newport Shipyard is large enough to handle the bigger yachts, but there is nothing like that on this side of the island, he said.

“If I owned a 100-foot yacht, and I didn’t want to bring it to Newport Shipyard, where could I go?” asked Zoning Board Chairman Jim Nott.

“There’s not many options,” Mr. O’Connor replied. “You would have to go south.”

Safe Harbor has several buildings at Melville, one of which is 50 feet tall. Ms. Dufault said she believes Safe Harbor requested and was granted a height variance for that building as well.

Dan Szymanski, of Northeast Engineers & Consultants, Inc., testified for Safe Harbor and explained the layout and design of the steel-frame building, which would be 145 by 250 feet in size and feature 36,250 square feet of floor space. It would be nestled between Lagoon and Alexander roads, taking up an area that is mainly used for outdoor storage.

Responding to a question by Mr. Nott, he said an existing storage building would be removed to accommodate the new structure.

No local residents commented on the plan during last week’s hearing, but there are no residential residential abutters within 200 feet of the proposed building anyway.

Of the six abutters listed in the application, three of them were from Safe Harbor. The other three were GMH Military Housing, the Town of Portsmouth, and the State of Rhode Island (for the rail lines, located just to the east).

John Borden, vice chairman of the zoning board, said he fully supported the application, adding that it was a “typical” need in the boat storage business.

“I may have voted for one height variance once in my 22 years on this board. I’m generally opposed to them, but this is not a residential area. It’s a marine, waterfront area,” Mr. Borden said. “It would amount to more than a mere convenience if they were denied this relief. This is not a self-imposed hardship.”

The board voted 5-0 to grant the variance to Safe Harbor.

This furniture is built for generations

The family home – for six generations

Police: Woman arrested after driving over lawn on Prudence Island