PORTSMOUTH — Municipal staff members, along with a few elected local and state officials, gave retiring Town Planner Gary Crosby a final sendoff this week, thanking him for his leadership … 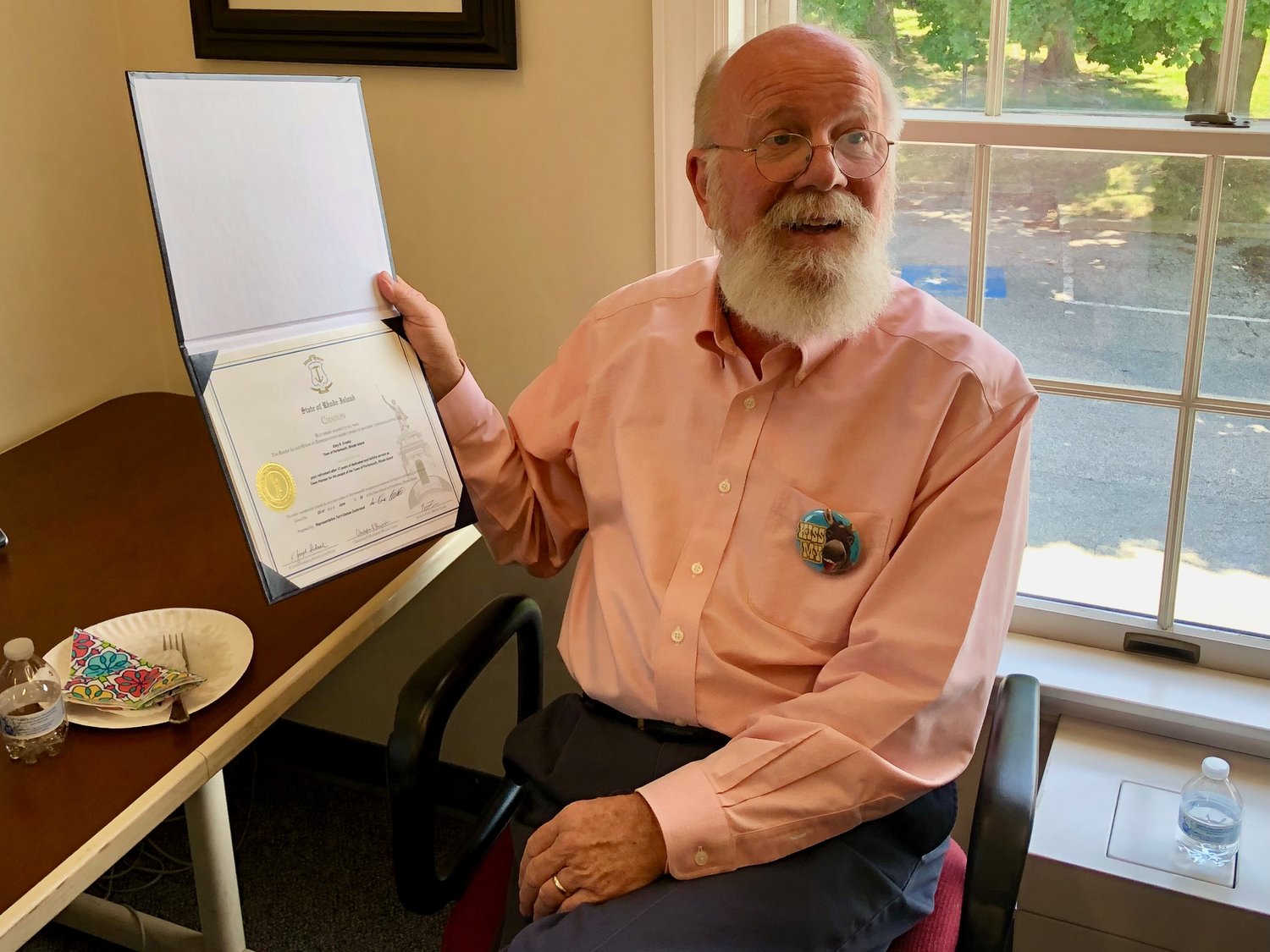 At a retirement sendoff at Town Hall Thursday, Town Planner Gary Crosby holds up a citation from the R.I. House of Representatives that Rep. Terry Cortvriend had just presented him.
JIM MCGAW 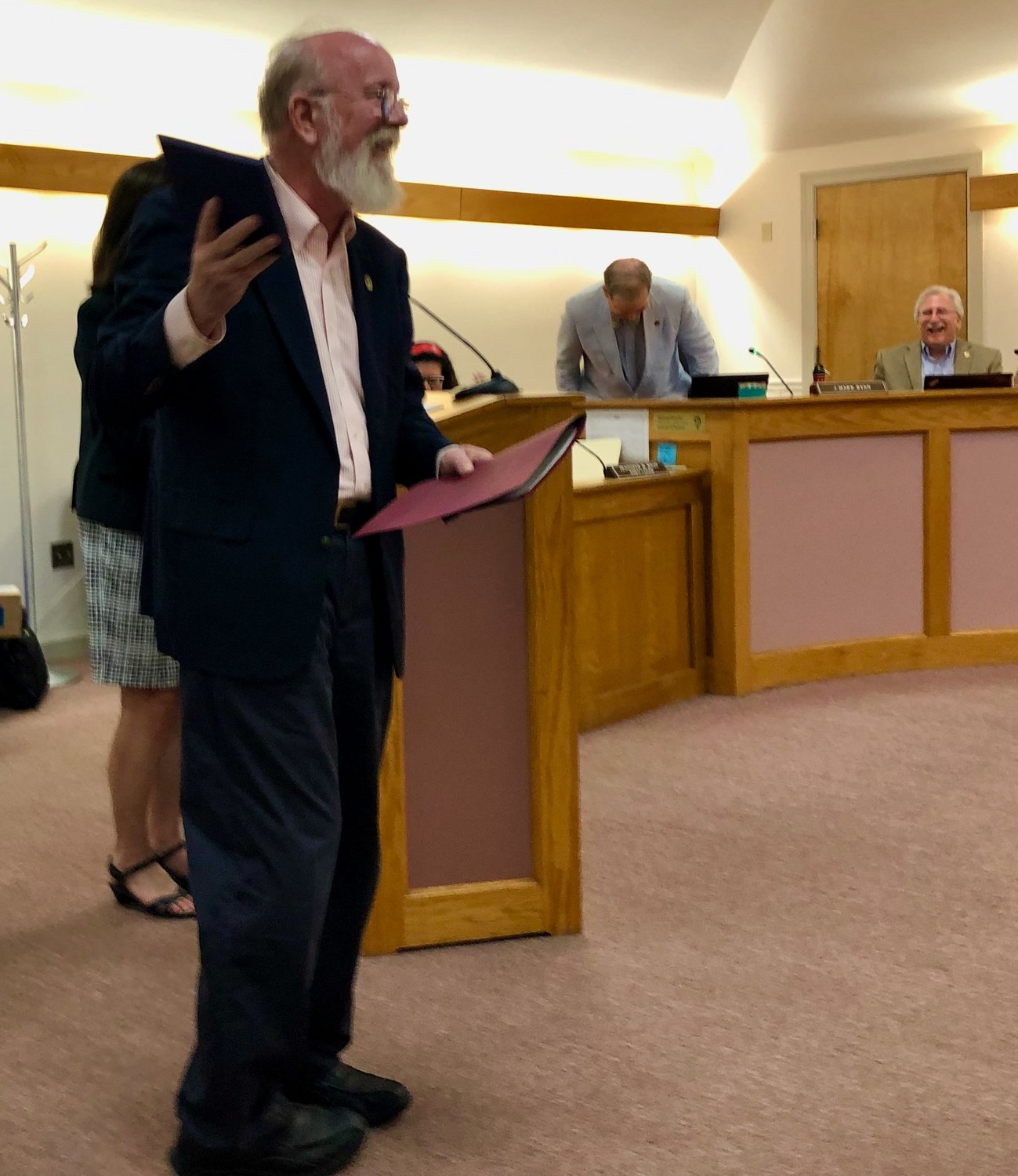 “I finally got a tile!” Crosby exclaimed after he was presented with a town tile and a proclamation in his honor during a Town Council meeting on Monday, June 27.
JIM MCGAW
Previous Next
Posted Friday, July 1, 2022 12:29 pm

He’s just been a mentor, he’s been a friend, and somebody I could lean on for seven years.”
Town Administrator Richard Rainer, Jr., on retiring Town Planner Gary Crosby
By Jim McGaw

PORTSMOUTH — Municipal staff members, along with a few elected local and state officials, gave retiring Town Planner Gary Crosby a final sendoff this week, thanking him for his leadership while guiding Portsmouth’s growth and development over the past 18 years.

As planner, Crosby was the main force behind getting the town’s Comprehensive Community Plan approved. He was also responsible for updating the town’s Hazard Mitigation Plan in 2018 as well as getting a Wastewater Management Plan and Wastewater Ordinance approved in 2015.

“What a pleasure it’s been to work with him,” said Town Administrator Richard Rainer, Jr., who was among those gathered in the Portsmouth Room at Town Hall Thursday for a lunchtime celebration in honor of the planner. “I gave him a card that said, quite frankly I’d have been totally screwed during the last seven years without him. He’s just been a mentor, he’s been a friend, and somebody I could lean on for seven years. I’m going to miss him very much.”

Rep. Terri Cortvriend presented Crosby with a citation from the R.I. House of Representatives at Thursday’s event.

Crosby told his colleagues that usually when he’s in a public forum and says he’s “speechless,” it means he’s disappointed in something.

“This is a very pleasant occasion for me to say that I’m speechless” Crosby said. “Thank you all very much. Do I get the plate of cookies to take home?”

Crosby had more to say on Monday, June 27, when the Town Council honored him with a Proclamation of Appreciation honoring his “many years of dedicated public service” as town planner.

“The Town Council recognizes your many accomplishments and congratulates and thanks you for your untiring efforts on behalf of our community,” the proclamation read.

Crosby said he appreciated getting the opportunity to serve as planner “nine Town Councils ago.” He recalled something a former town administrator, Bob Driscoll, used to share with him: “Watch out for the Oxford comma, and remove the word ‘very’ from every bit of writing you do.”

“I never served in the military, but in the last seven years I think I’ve gone through officer training school. I learned a great deal from you about leadership, character and decision-making. I very much appreciate it,” he told Rainer.

Crosby said he also learned a lot about the law from Town Solicitor Kevin Gavin. “I think I could reasonably sit down and take the bar exam,” he said.

Executive Assistant Barbara Ripa made his job much easier, Crosby added. “She’s the glue that holds this place together,” he said.

Rainer said although he’s sad to see Crosby go, the town will be in good hands with Lea Hitchen taking over the reigns. HItchen, a Portsmouth resident, was hired to be Crosby’s successor in April, shortly after he announced his retirement.

“Lea’s fantastic. She’s got very good credentials, she’s tough as nails, and she fits right in. I’m looking forward to working with her,” Rainer said.