As a deterrent to impaired driving, PHS seniors witness what a DUI crash scene looks like

Hi, there’s an accident at the high school. It looks like there’s two cars. I can’t see too well; I was …

As a deterrent to impaired driving, PHS seniors witness what a DUI crash scene looks like 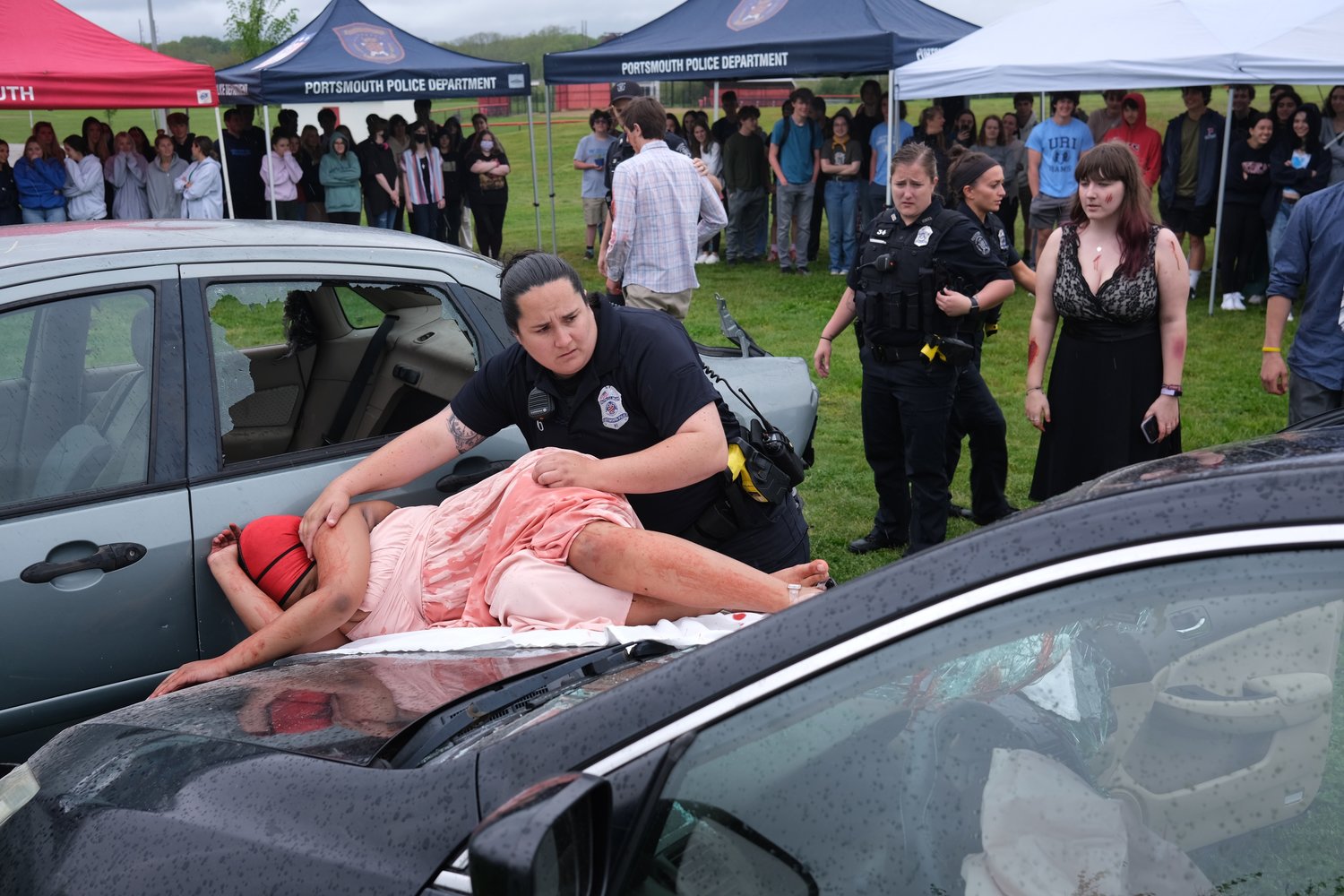 Police Officer Maddie Pirri checks Renesha Duncan for vitals during a mock DUI crash event staged outside Portsmouth High School in front of seniors last week. Duncan, a sophomore, was playing the part of a passenger who was killed after being ejected from a car operated by a drunk driver. Looking on at right is Anastacia Inman, another student who played one of Duncan’s friends. In the middle are Police Officers Amanda Weaver (left) and JeanMarie Stewart.
JIM MCGAW 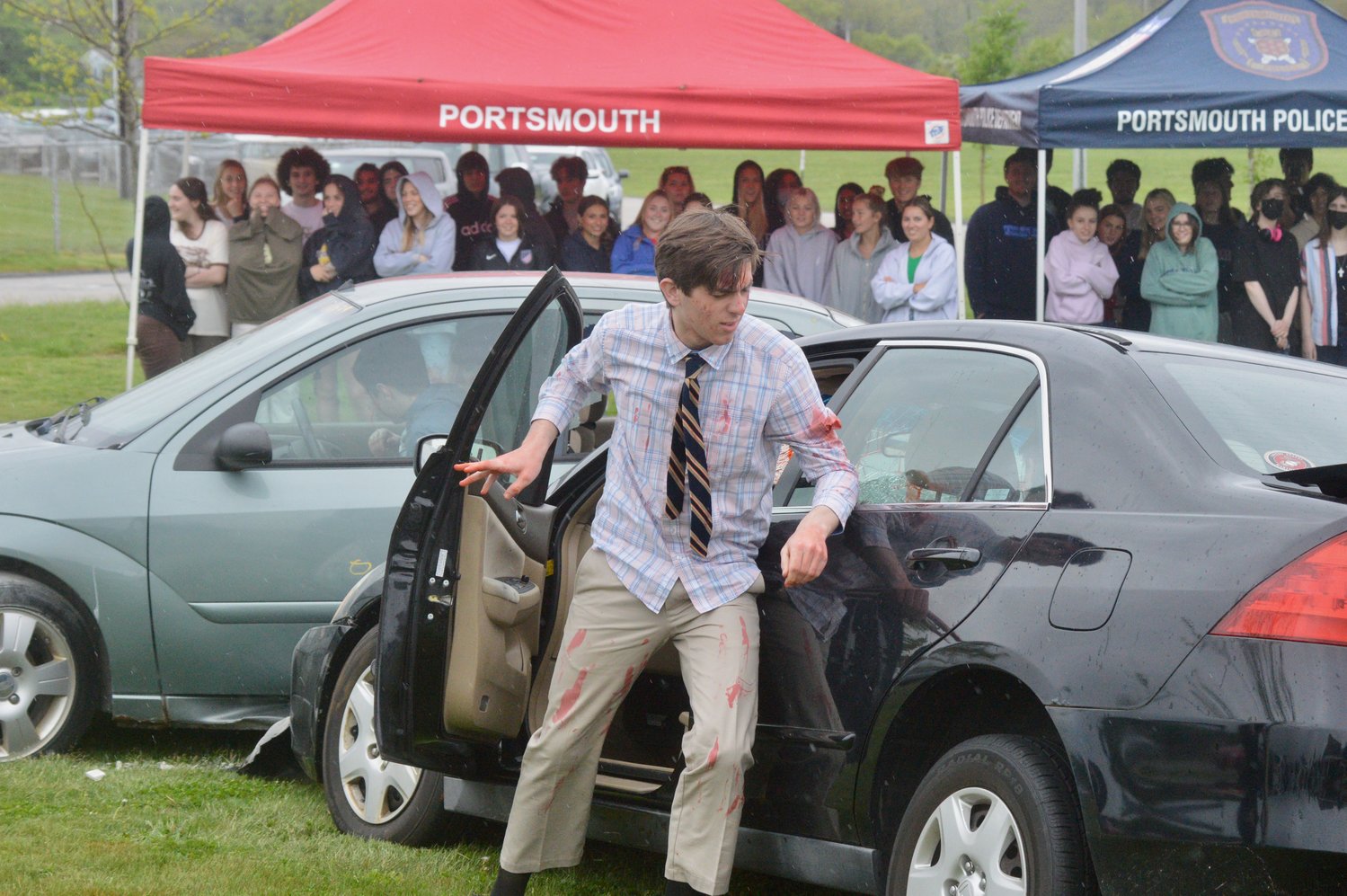 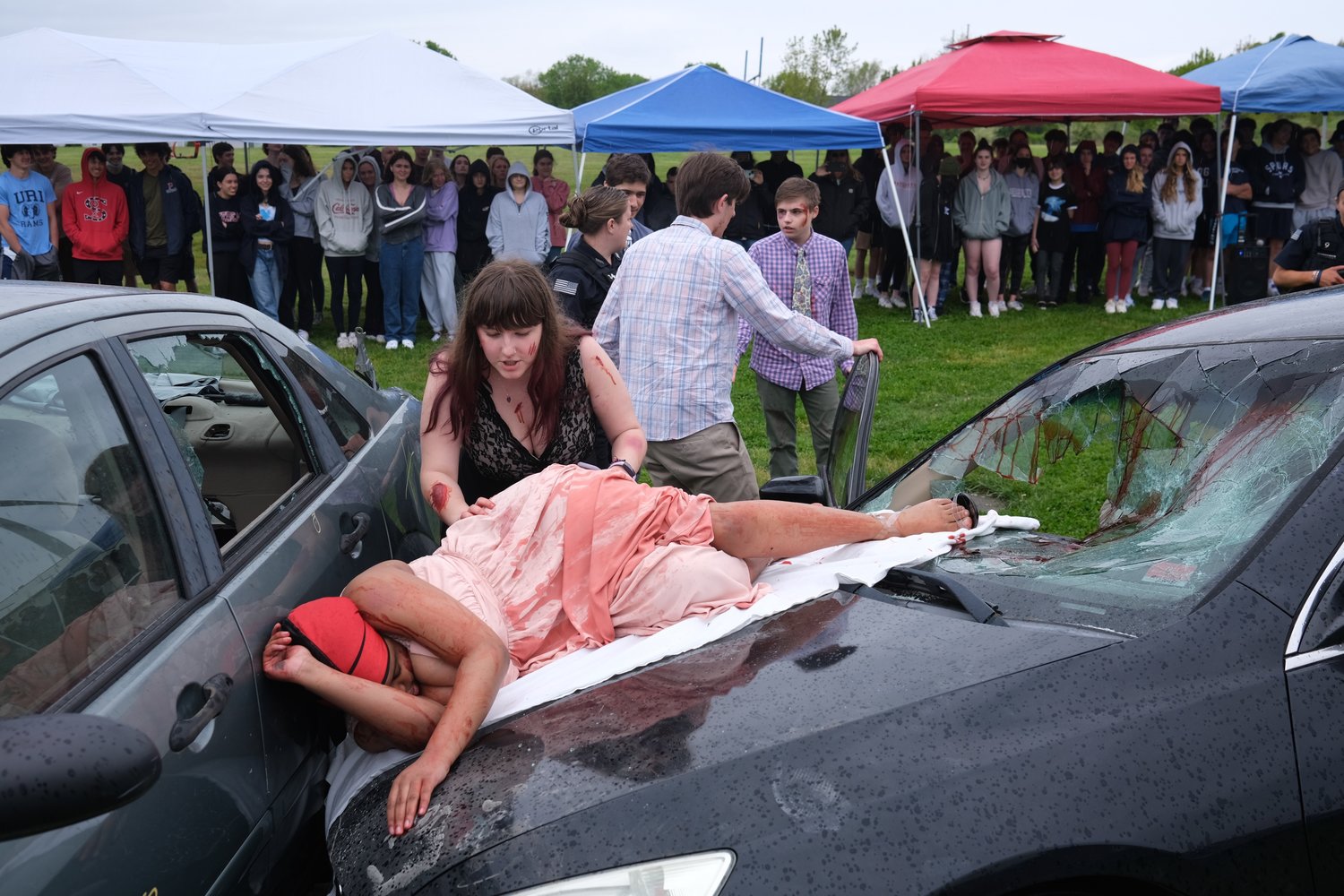 A distraught Anastacia Inman checks on her lifeless friend, Renesha Duncan, who was laying on top of the hood after being ejected from the car.
JIM MCGAW 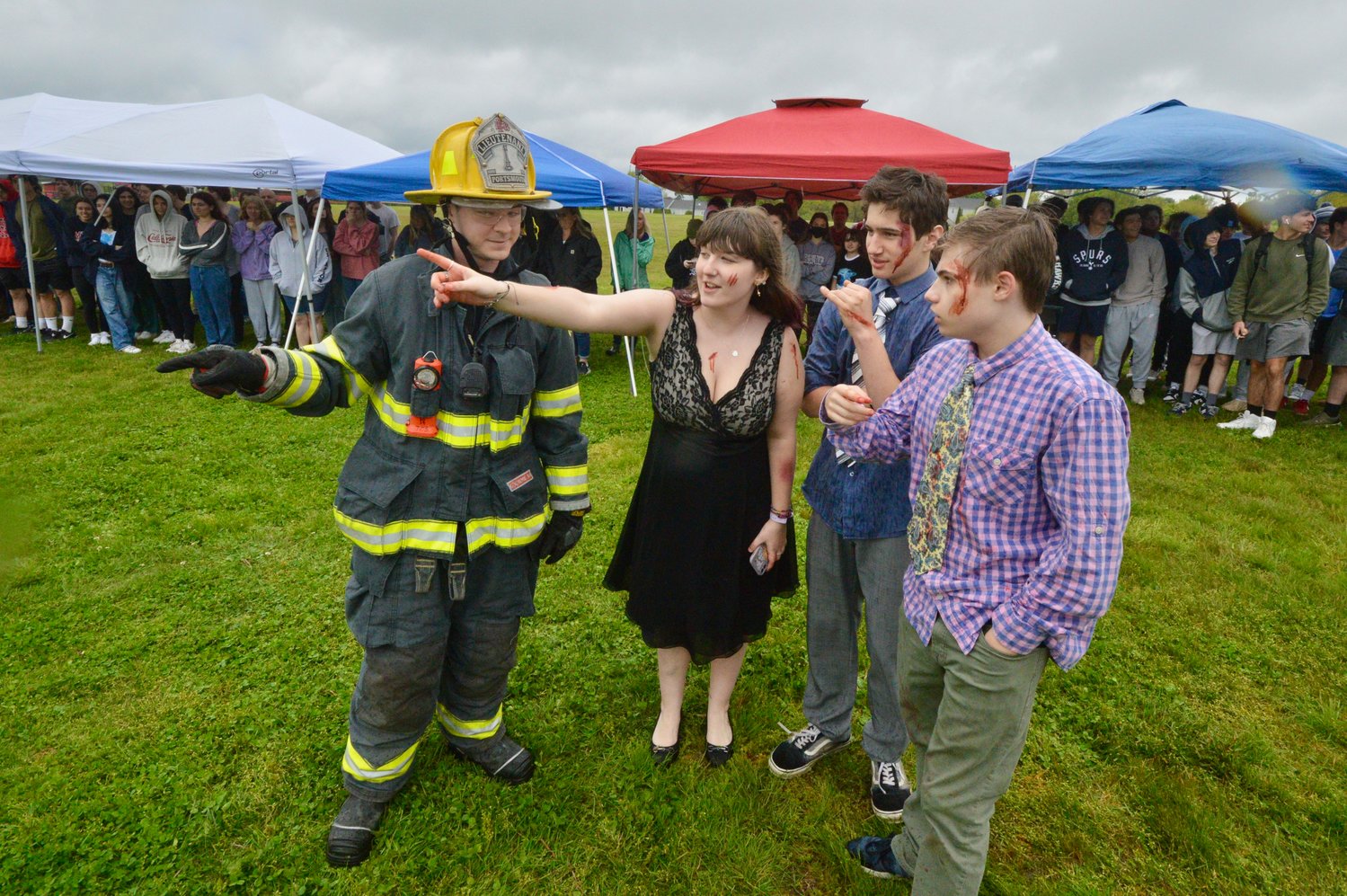 Lt. Jordan Smith of the Portsmouth Fire Department speaks with Anastacia Inman, Walker Anderson, and Josh Champagne to get their side of the story. 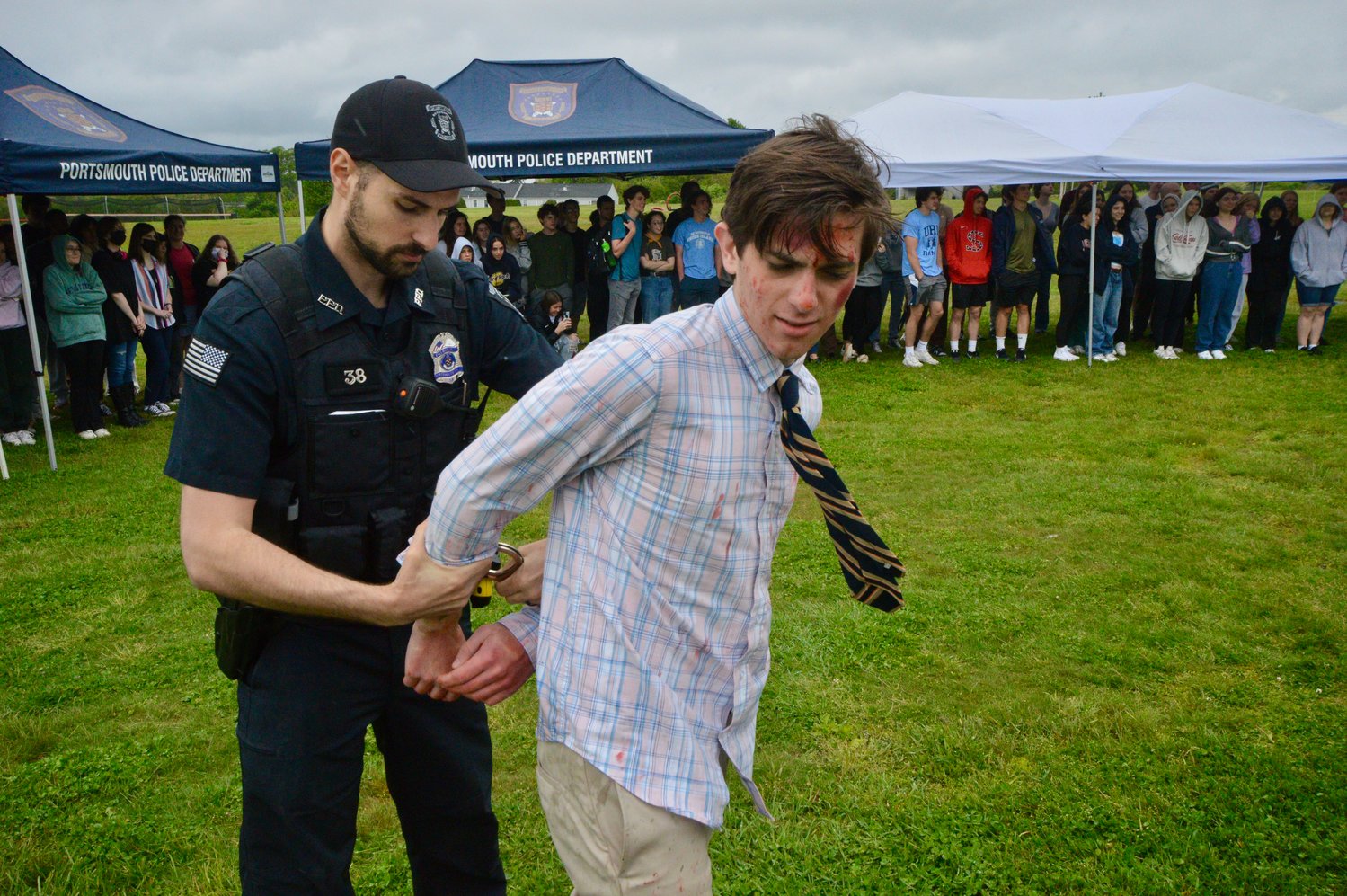 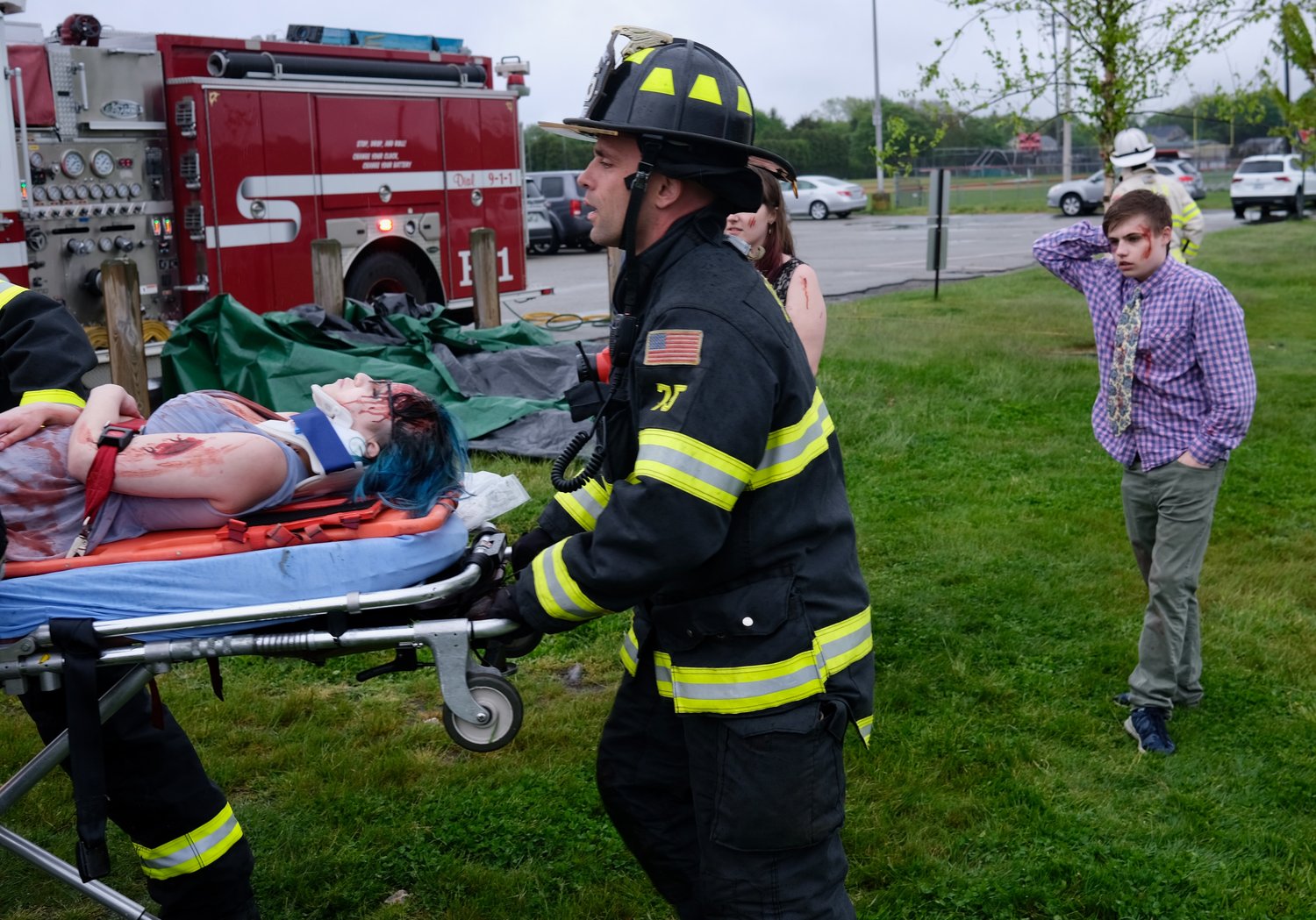 Megan Conant played a student who had to be removed from the back of a car using the Jaws of Life. Her friend Josh Champagne helplessly looks on as she’s taken away on a stretcher. They may look like the cast from a slasher or zombie flick, but these (fake) blood-spattered Portsmouth High School students were actually actors in a mock drunk-driving crash reenactment staged by the Portsmouth Police Department outside PHS last week. They are (from left): Renesha Duncan, Megan Conant, Anastacia Inman, Josh Champagne (squatting), Walker Anderson, and Jackson Benner.
JIM MCGAWv 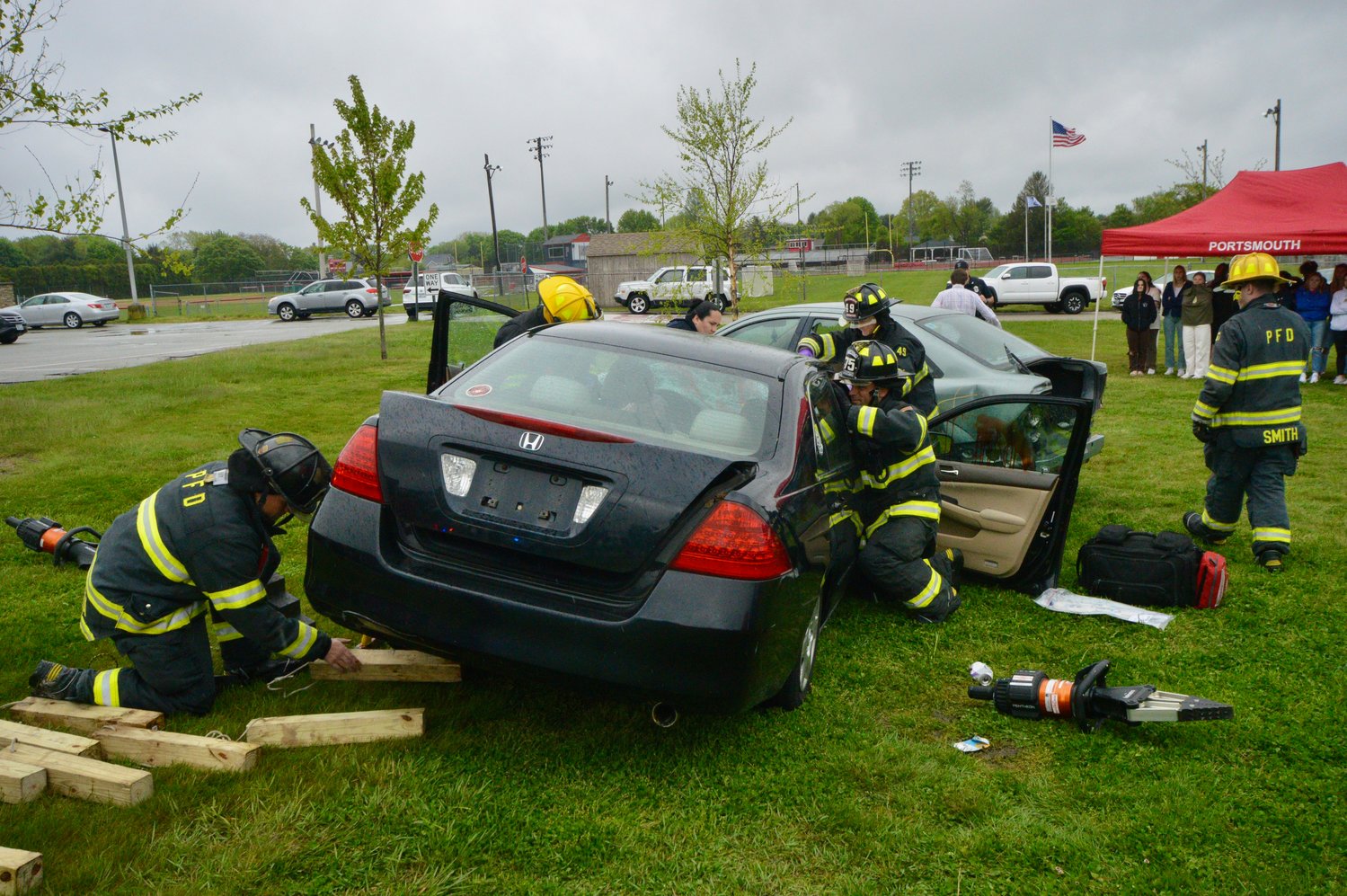 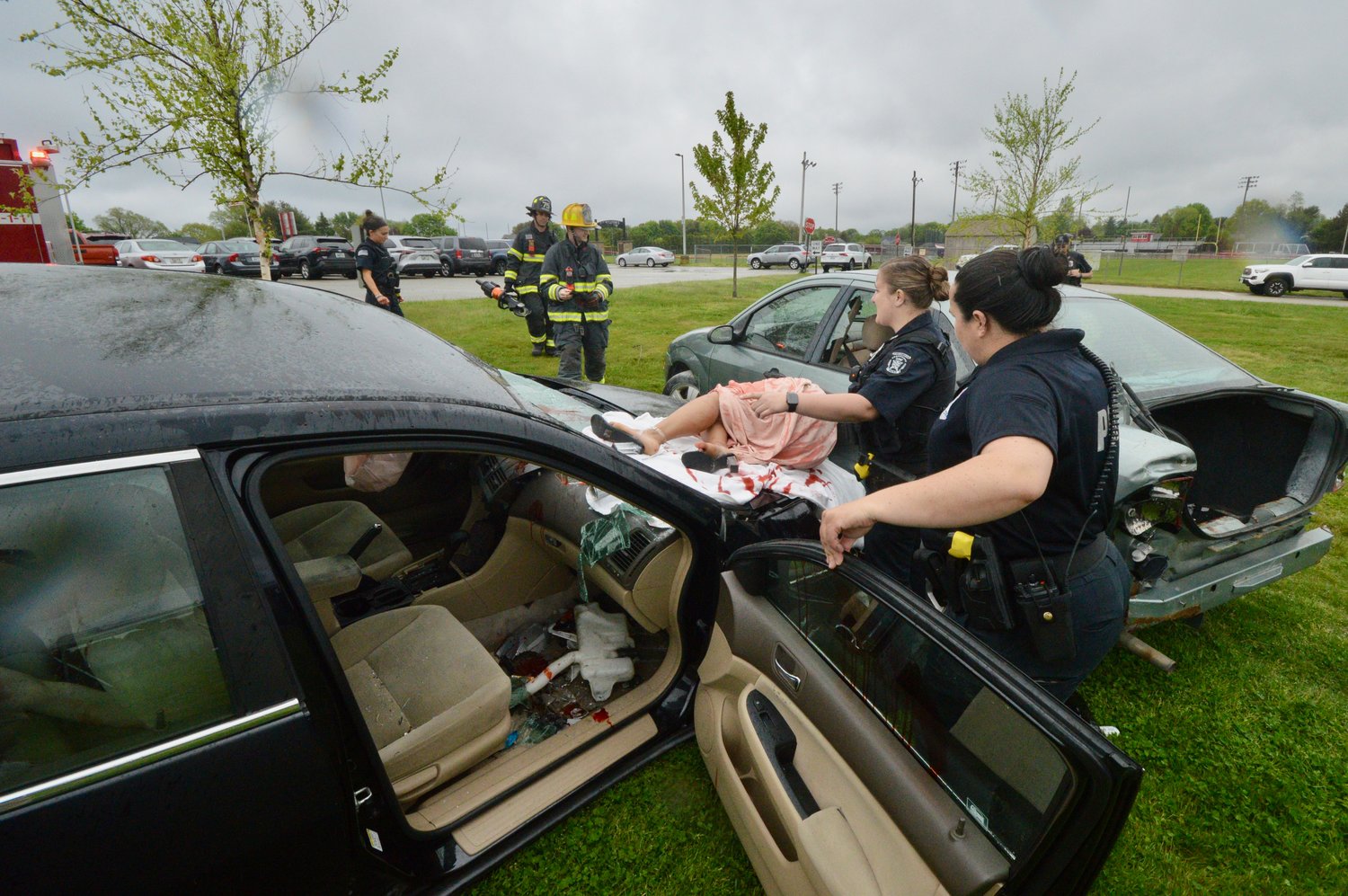 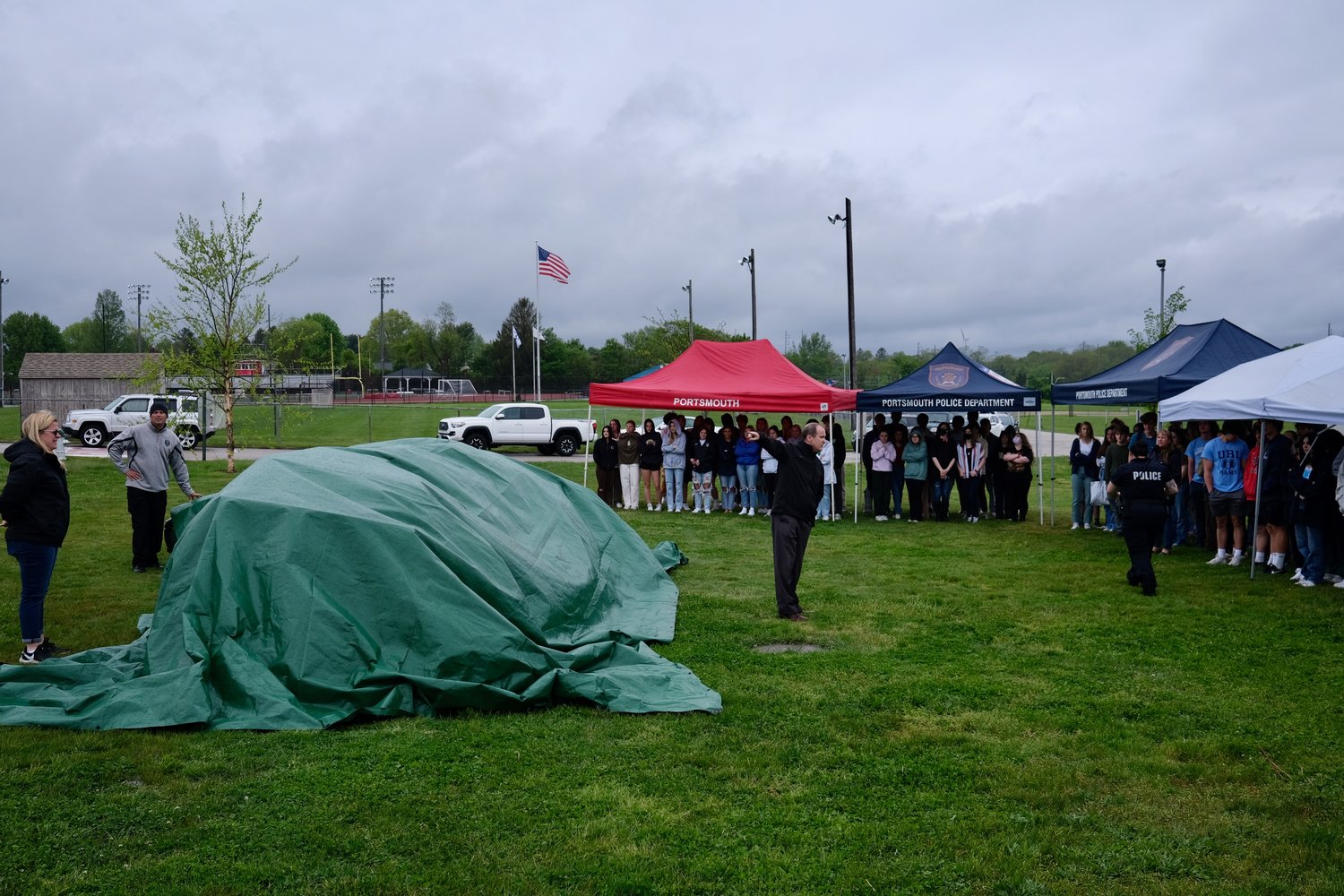 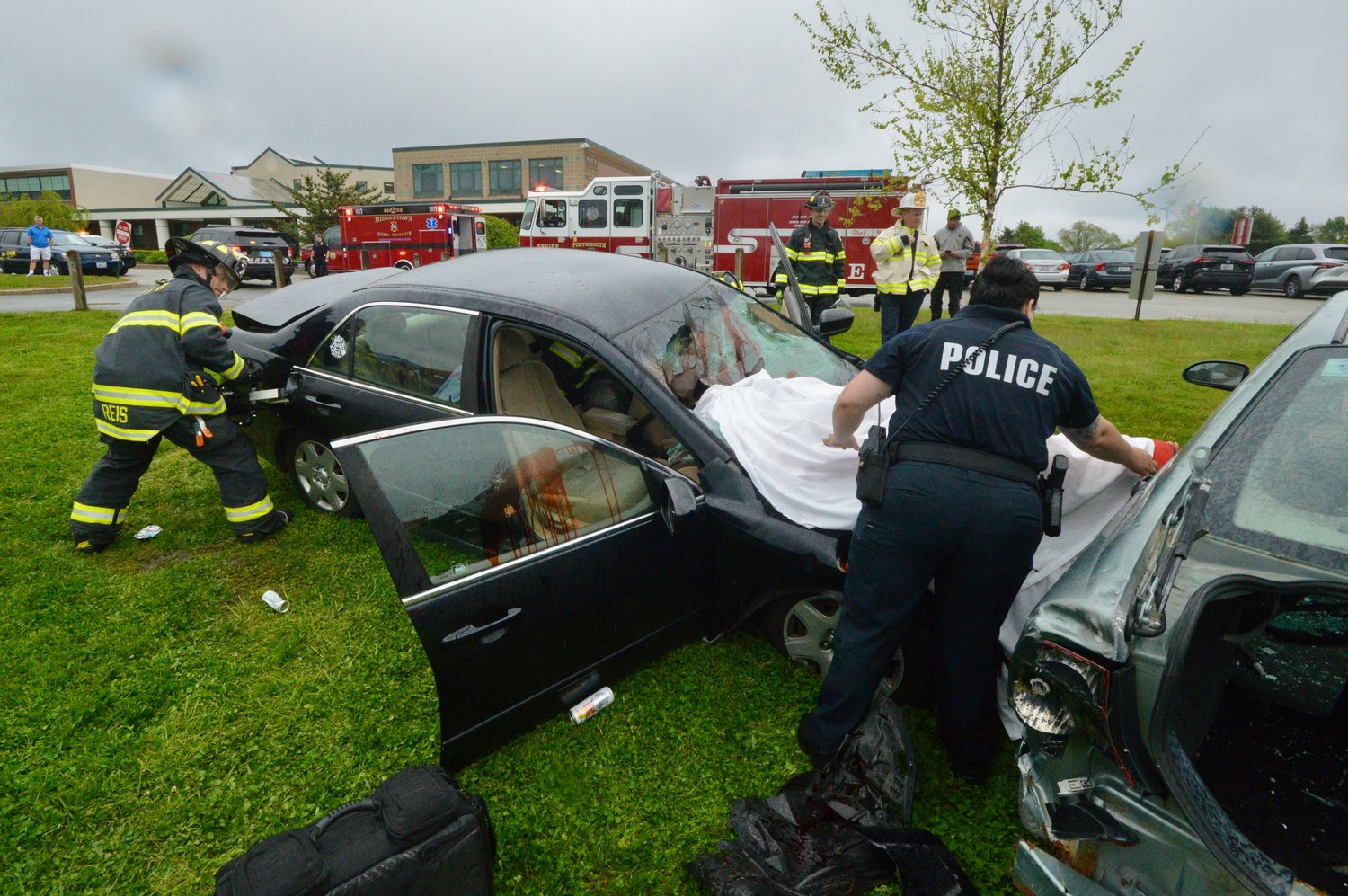 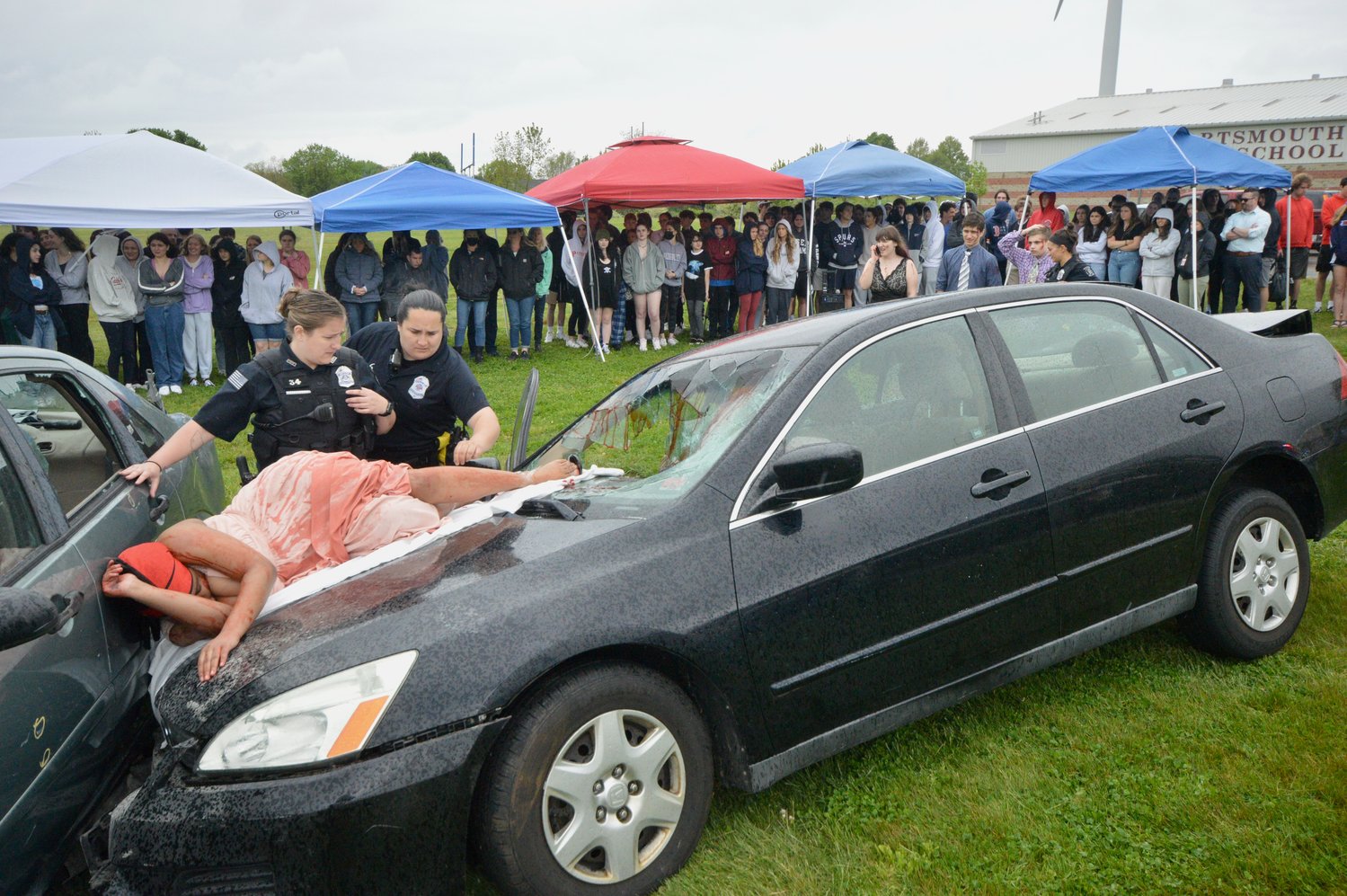 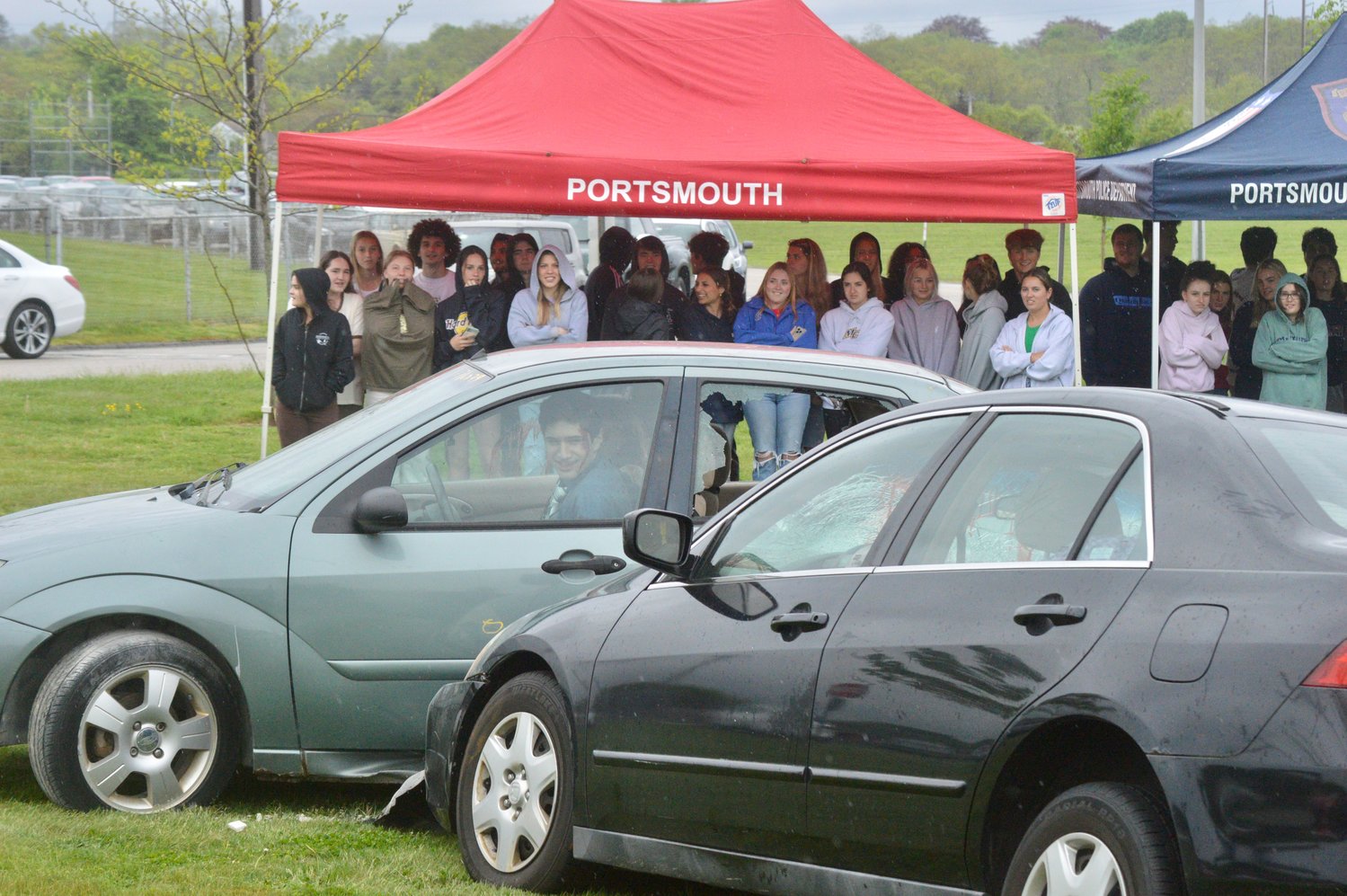 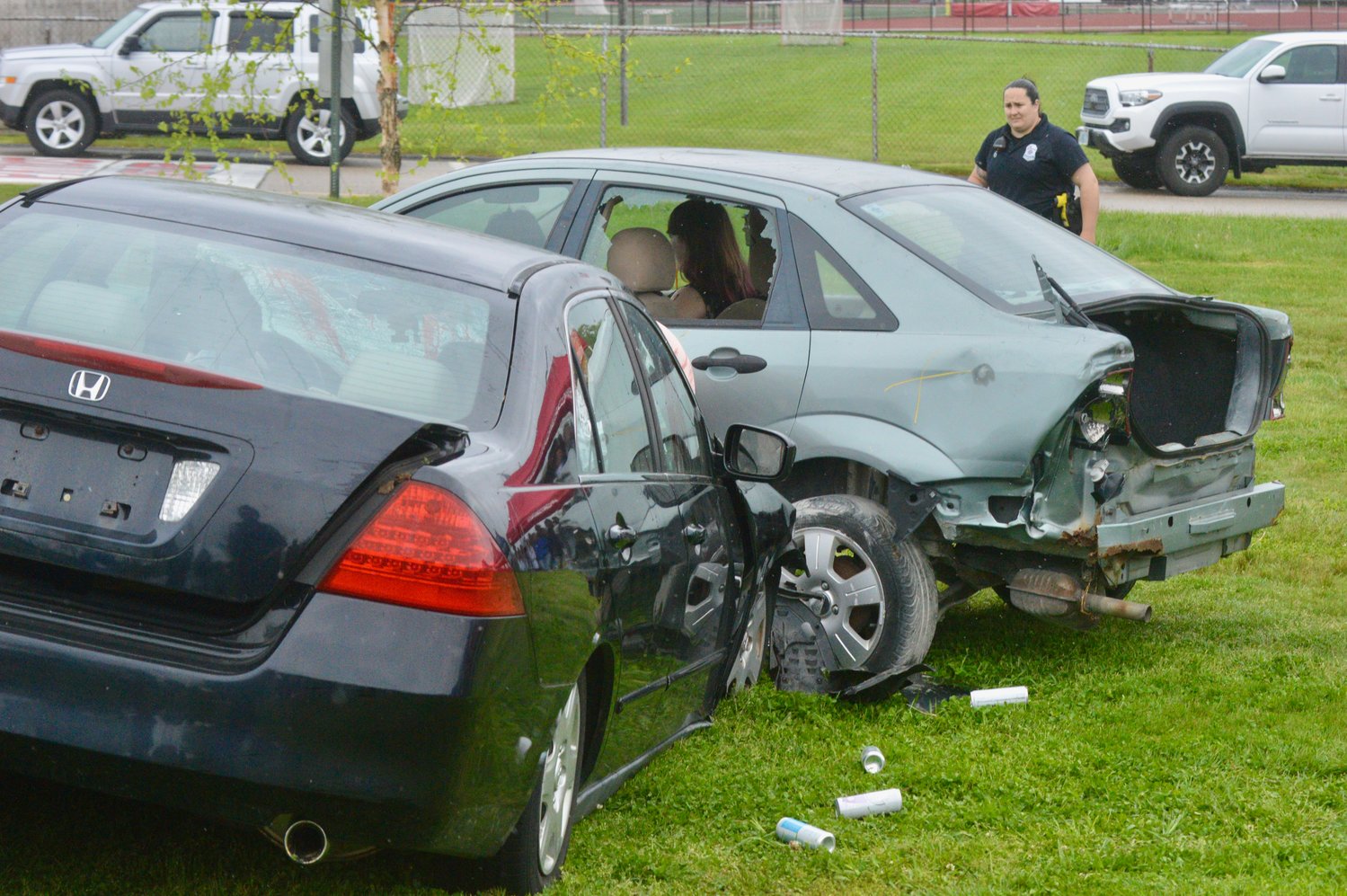 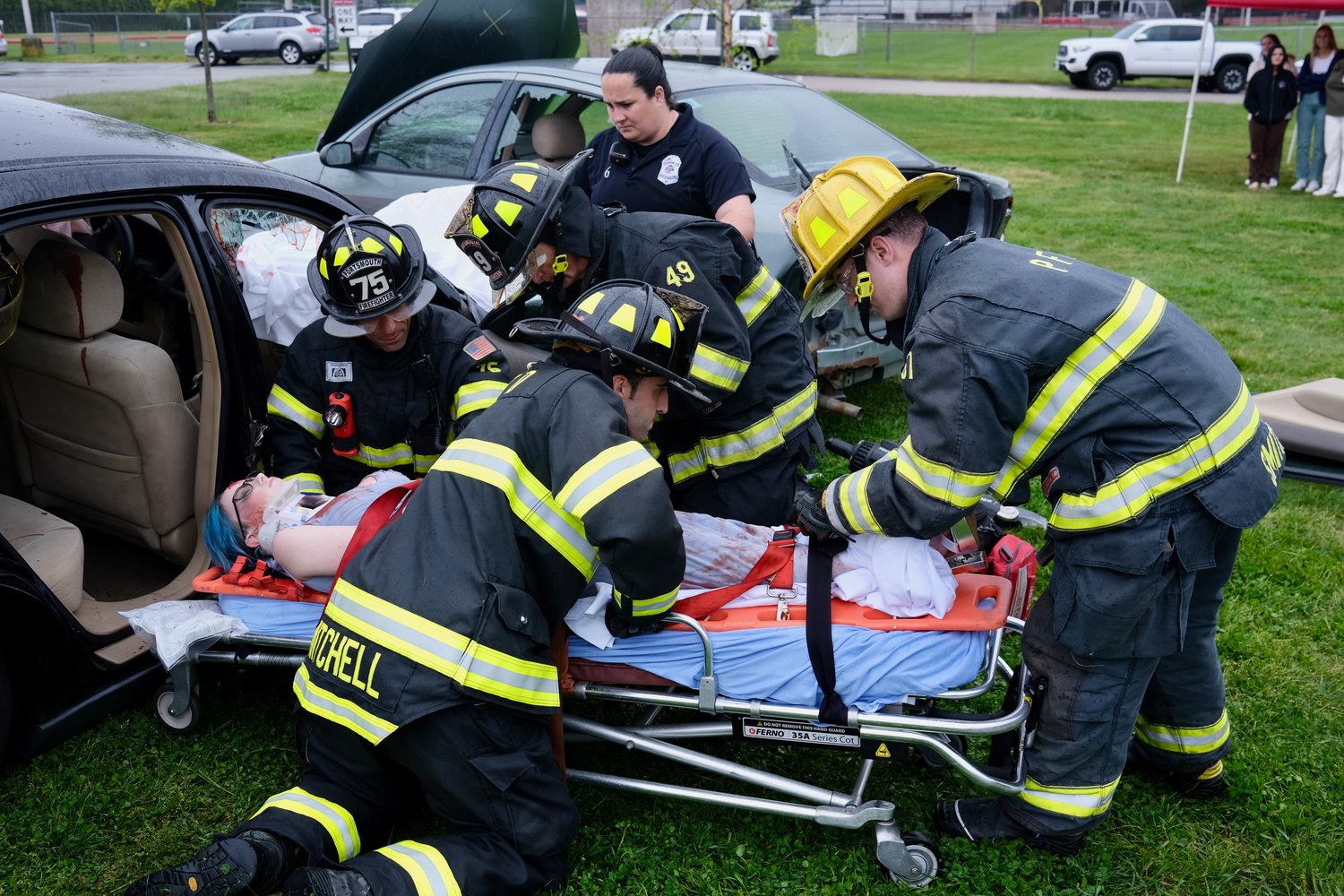 By seeing it up close, this is the most realistic way you’re going to get to them.”
Portsmouth Police Officer Maddie Pirri
‘Find a safe ride home,’ MADD rep tells students

While Portsmouth High School seniors were watching a dramatic DUI crash re-creation outside, juniors were in the auditorium for a presentation by Francie Mantak, a victim advocate from R.I. Mothers Against Drunk Driving (MADD).

Mantak played videos from victims of car accidents that were caused by intoxicated or distracted drivers. She urged students to always pay attention when they’re driving, wear their seatbelts, and never step into a vehicle being operated by an impaired driver.

“Find a safe ride home. If you don’t have one, please text your parent or guardian. Every parent wants you to get home safely. Don’t risk your life because you’re afraid of getting in trouble,” she said.

Mantak recounted the sad story of Emma Brown, 21, who was in a Jeep that crashed in Warwick in 2018 after being operated by an impaired driver. The driver survived but Brown and another passenger, Lorenzo Smith, 33, were killed. Mantak recalled a conversation she had with Brown’s mother.

“Her mom said, ‘She knew I would always come pick her up. Why didn’t she call?’”

She also cautioned students to be safe during prom season. Although it might seem like the best night of their lives, prom can also be “complicated,” Mantak said. Like weddings, there’s often drama, arguments and too much drinking.

“One of the things that happens is that you put pressure on these big events. If they’re not absolutely perfect, you’re going to lose your mind,” she said.

But events like weddings and promos are “not the end-all, they’re the beginning,” Mantak said, adding it’s important to always have “safety nets” ready.

“You need to be strong all the time,” she said.

Hi, there’s an accident at the high school. It looks like there’s two cars. I can’t see too well; I was right behind them.

Do you know if anyone was injured?

I don’t know. I think so. It looks like someone is stuck in one of the cars.

OK, we’ll have officers and an ambulance coming. Are the cars still on the roadway?

Yeah, they’re smashed up really bad. There was a car coming straight at us in the opposite direction. They weren’t even in their lane.

OK, you stay there in case the officers want to speak to you.

The sound of sirens coming from Turnpike Avenue get louder as police cruisers descend on the campus, followed by a fire truck and ambulance.

Four teenagers stumble out of two cars that had been involved in a head-on collision. Their faces and clothes are bloodied, and they try to make sense of what just happened. One girl’s lifeless body lays atop a roof after being ejected through a windshield. Another girl is trapped in the back seat of the car.

One of the drivers is accosted by the others amid the broken glass and cans of Heineken. There’s a lot of shouting and anger, as first responders try to sort out what happened.

What is wrong with you? Why would you do that?

I didn’t do any of that!

Yes you did — she can’t even breathe!

You can smell it on his breath!

He killed my friend!

They’re not breathing — I don’t know what’s wrong with them!

The girl on the hood is checked for vitals by Officer Maddie Pirri and is pronounced dead. Firefighters have to use the Jaws of Life to extract another girl from the back seat. She’s alive but unconscious, and is rushed to a hospital.

Officer James Thulier questions and gives the impaired driver a field sobriety test, which he fails. He is arrested on the spot, as classmates berate him.

What played out in dramatic fashion last Thursday was fortunately only a demonstration for PHS seniors, but first responders know it’s an all-too-common consequence of impaired driving.

“It’s one of the worst calls you can possibly respond to,” said Officer Pirri, who’s also a student resource officer for the school district. “For me, it’s really upsetting because you have to go make a death notification to a family member. We want the kids to see how hard it is to lose a loved one.”

That’s why such an elaborate staging was used, rather than a simple lecture.

“We were hoping to impact the kids as much as we could,” she said. “By seeing it up close, this is the most realistic way you’re going to get to them. We want them to see the dangers and how this actually happens in real life.”

The way Thursday’s scenario played out is all too common in real life, she said.

“This is a very high-possibility DUI accident resulting in death,” said Officer Pirri. “Really, we wanted to reach out and make sure they see the dangers and we teach them it’s very dangerous to get behind the wheel when they’re intoxicated or impaired — there could also be marijuana in their system. We want them to make the right choice and call somebody else to drive them, or their parents.”

The timing of the program was no accident, as one of the most important nights for juniors and seniors is fast approaching.

“Prom is coming up for junior and senior class, so that’s what we wanted to get through to the kids,” she said.

Volunteering to make a point

Although the six students involved demonstrated some fine acting chops, they were not members of the Drama Club.

“We just did it for fun, and to spread awareness to people who want to get drunk and drive at the same time,” said sophomore Renesha Duncan, who played the dead girl on the hood. “That’s not the right choice. You may think you’re going out and doing something so cool. No — you’re just doing it on a whim and being an idiot and killing people in the process.”

Duncan had the unenviable task of laying motionless on a car hood for more than 20 minutes on a chilly and drizzly day. She almost laughed when she heard a friend in the crowd yell out her name, but retained her professional composure.

Here are the candidates running for office in Portsmouth