Community’s help needed to get 98-foot sailboat, dry-docked at Hinckley, ready for long voyage to assist people of Micronesia 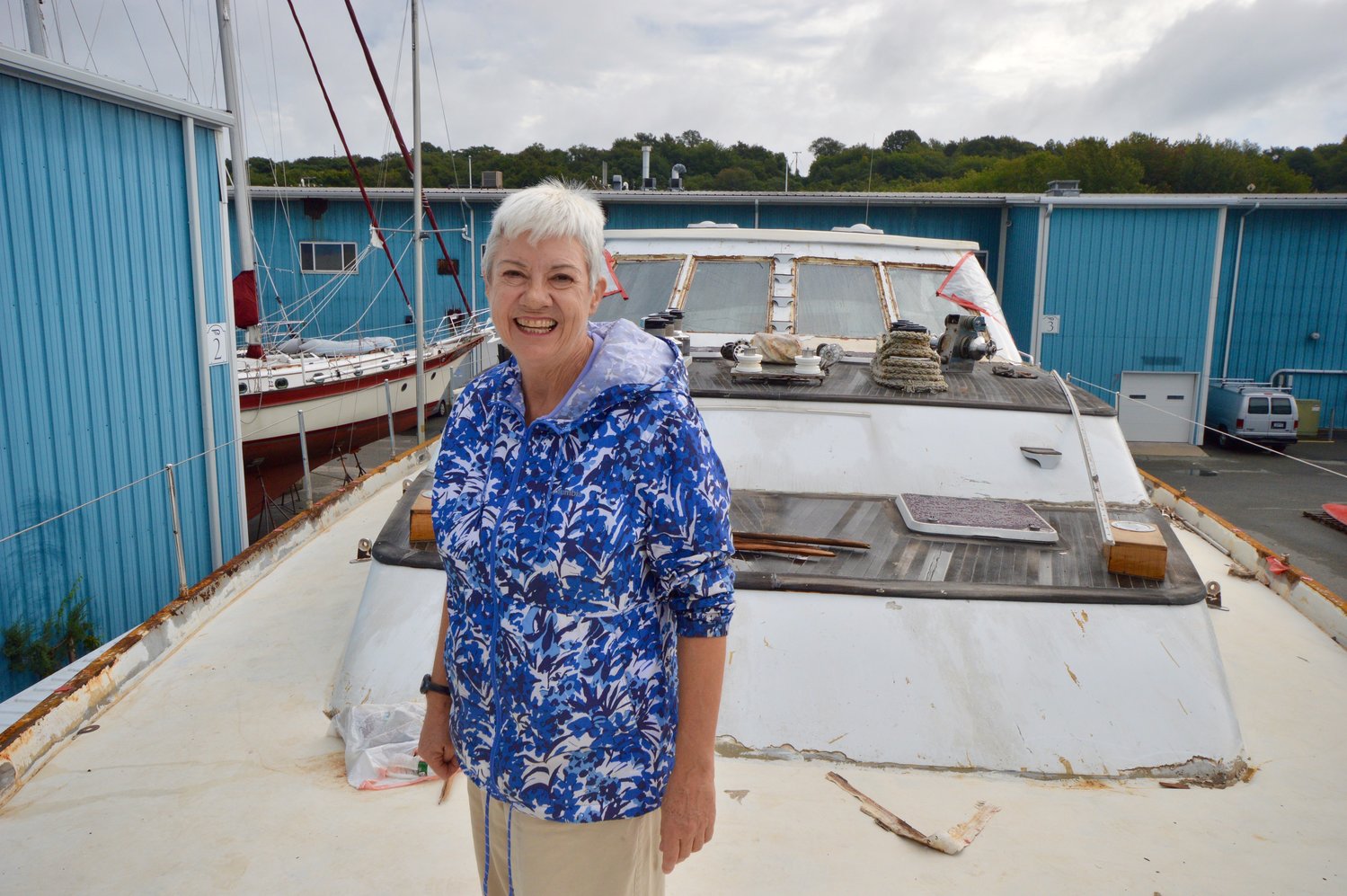 “Part of the goal is to champion the youth — that they can actually make a difference,” said Capt. Ann Ford of Youth With a Mission, here on the deck of the 98-foot, sloop-rigged Pacific Star, which is being restored at Hinckley Boat Yard for a mission trip to Micronesia later this year.
JIM MCGAW 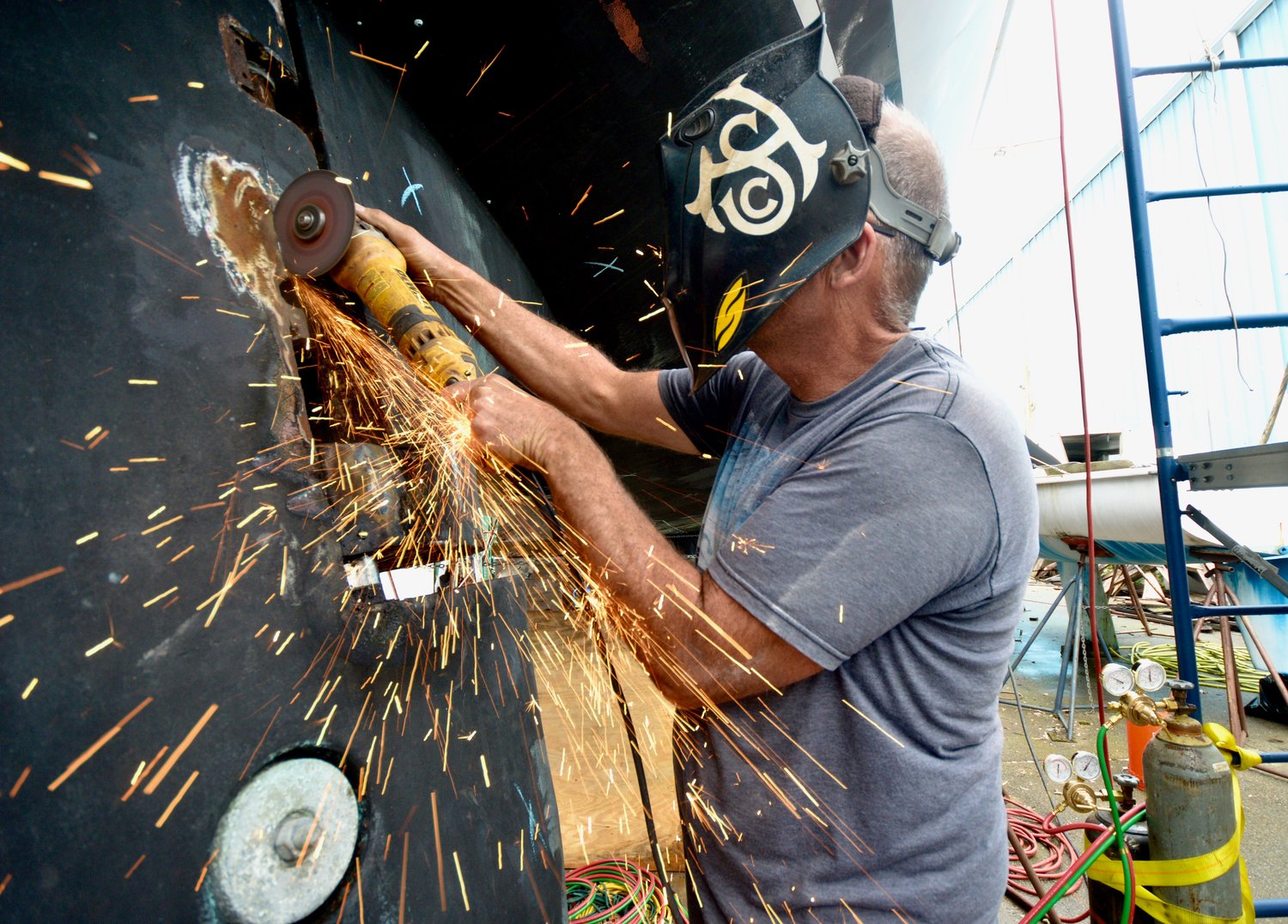 Sparks fly as owner Ty Fields cuts along one of Pacific Star’s rudders that needed to be dropped during restoration work at Hinckley Boat Yard last week.
JIM MCGAW 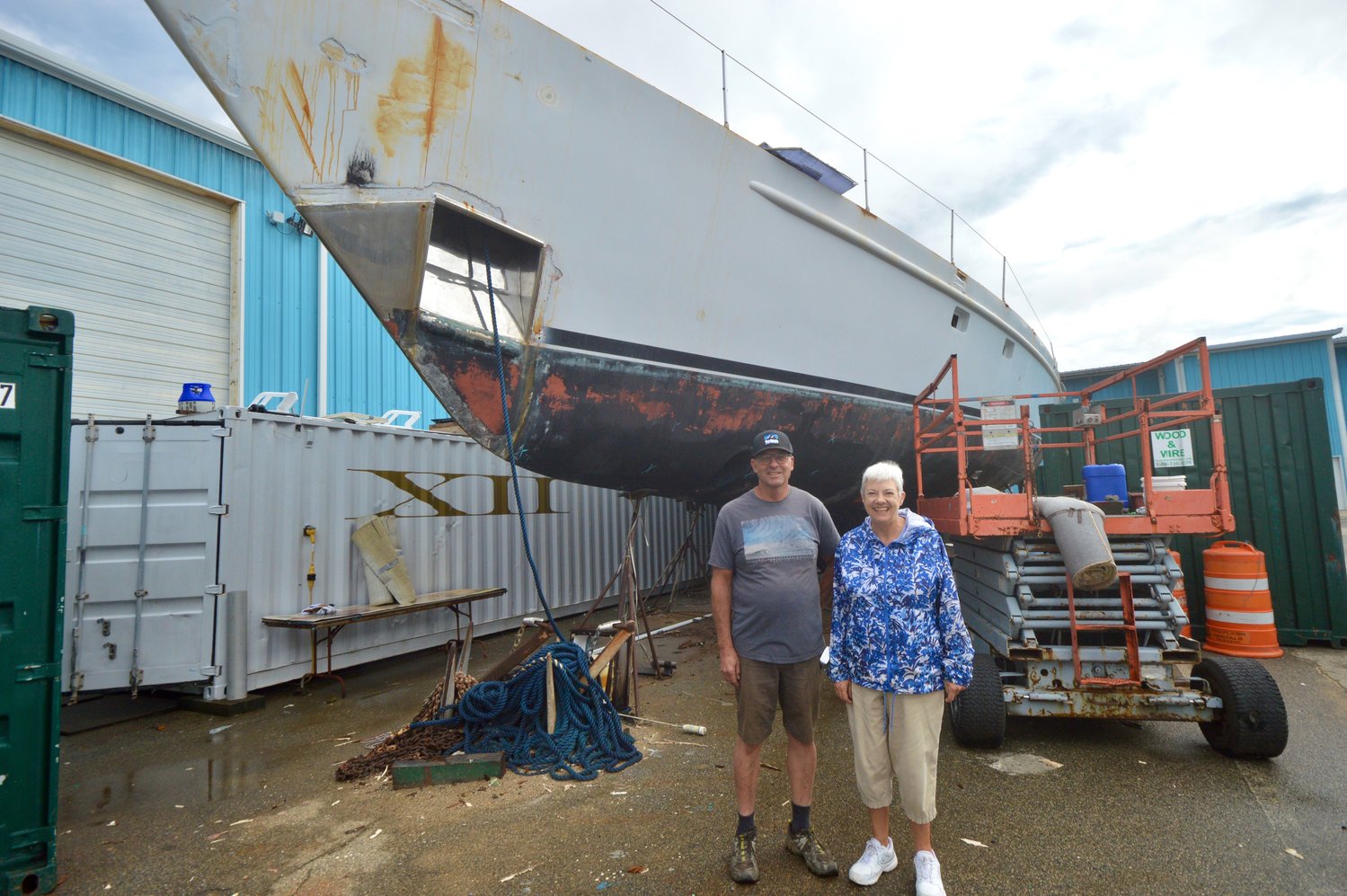 Standing in front of Pacific Star at the Hinckley Boat Yard last week are its owner, Ty Fields, and Capt. Ann Ford of Youth With a Mission (YWAM).
JIM MCGAW 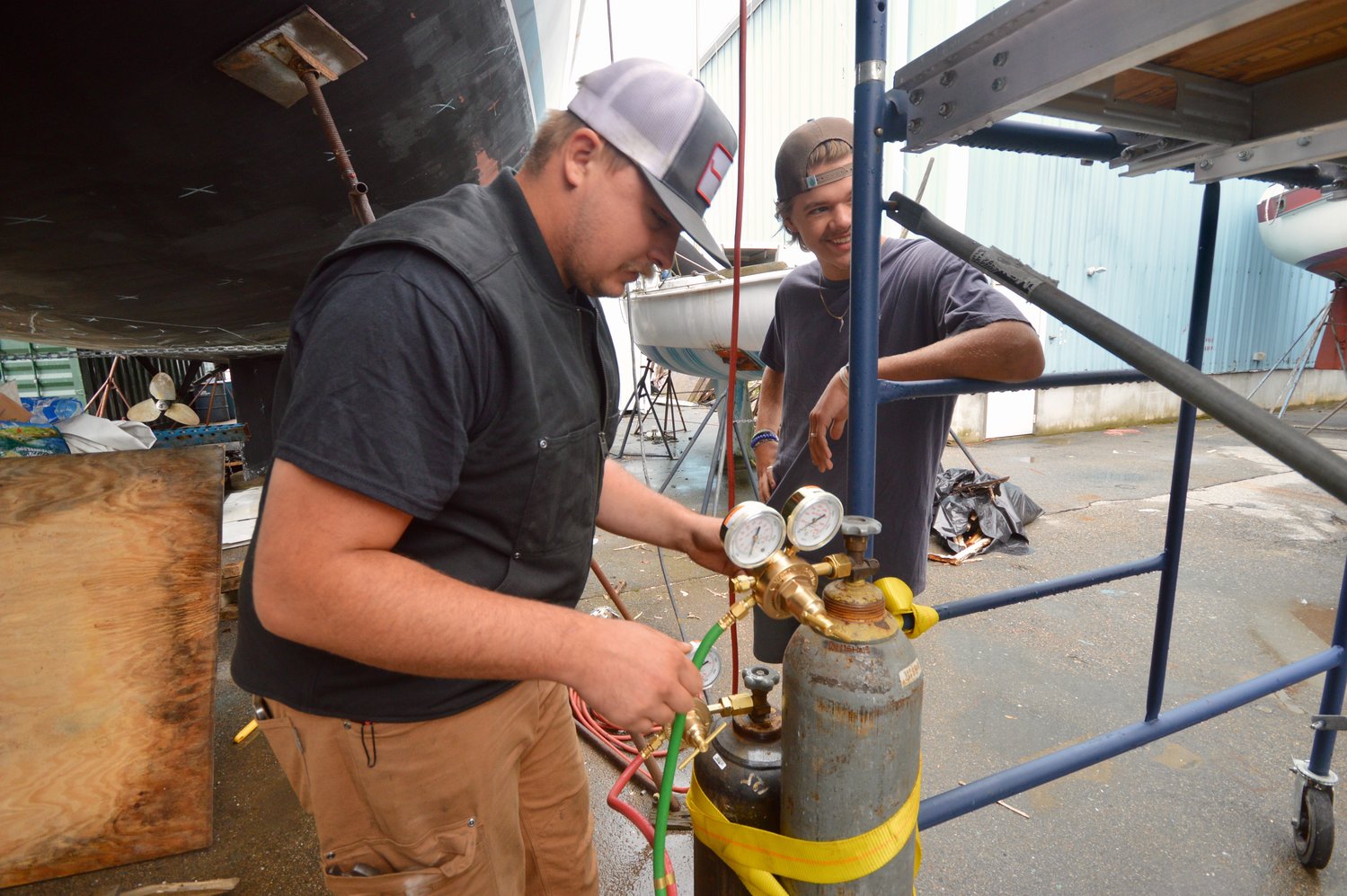 Jasper Fields (left) and Levi Deane Thorson are among of the volunteers getting the boat into shape at Hinckley. Jasper is the son of the boat’s owner, Ty Fields, while Levi is a member of YWAM who will be among the crew members headed to Micronesia.
JIM MCGAW 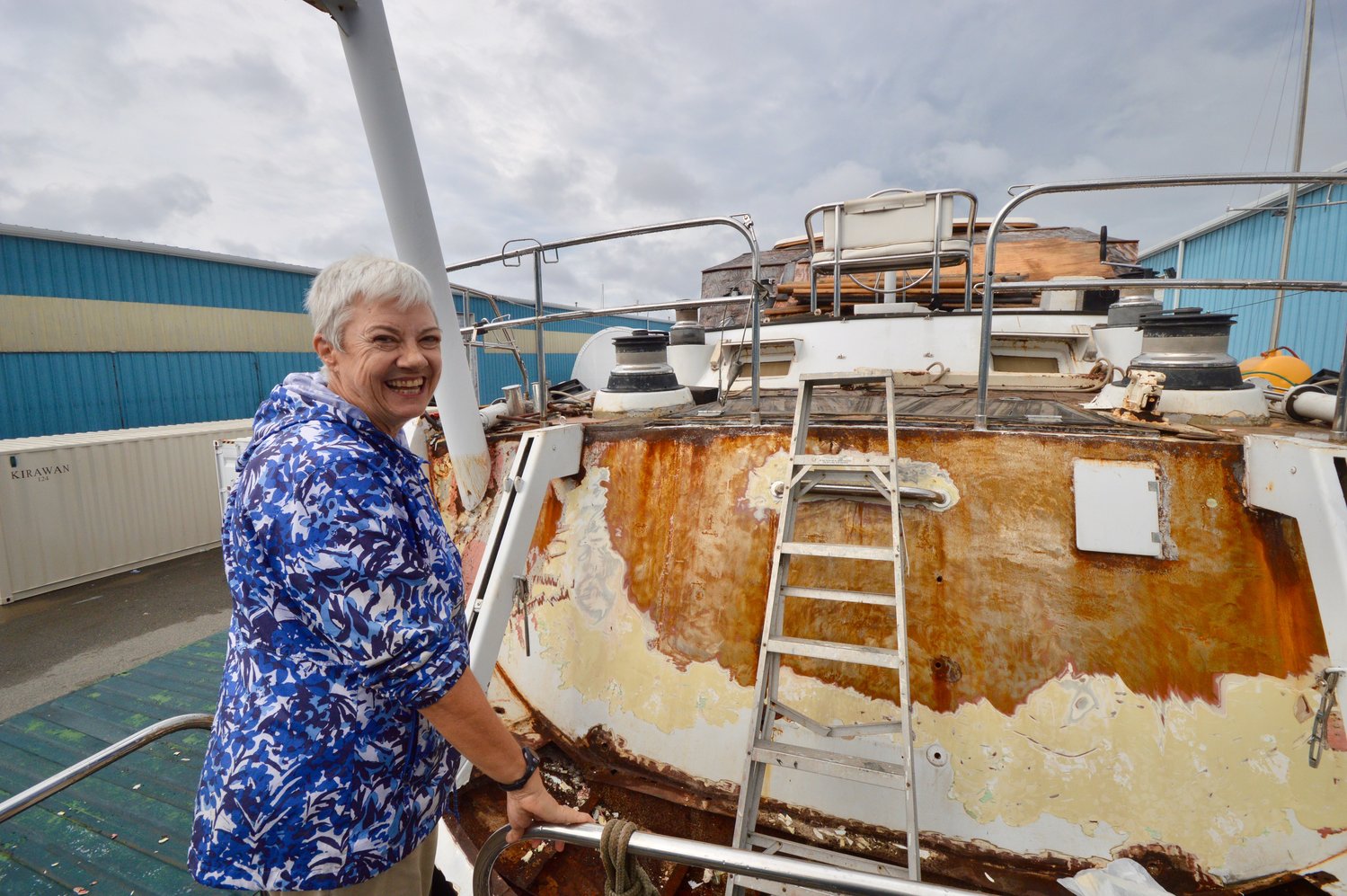 Capt. Ann Ford at the stern of the Pacific Star, which is undergoing a major restoration.
JIM MCGAW
Previous Next
Posted Thursday, September 23, 2021 11:52 am
By Jim McGaw

PORTSMOUTH — There are holes in the hull, rotted wood, a mess of equipment in the cabin, and patches of rust everywhere.

After a cursory inspection of the 98-foot, sloop-rigged Pacific Star that’s currently dry-docked outside the North Sails building at Hinckley Boat Yard, you’d never believe she’s scheduled to be launched next month for a voyage to Micronesia. The steel-hulled sailing vessel’s been sitting here, languishing, for about a decade.

But her owner, and the large international youth Christian organization that’s undertaking the mission trip, have faith that it will get done — given a little leeway with the timeline, that is.

“We’re hoping to get the boat in the water by October, and as soon as it’s voyage-ready, head south,” said Capt. Ann Ford, who serves with Youth With a Mission (YWAM) Ships, based in Kona, Hawaii.

While acknowledging she’s “given up on giving dates,” Capt. Ford said she’s hoping to arrive in Micronesia — which consists of hundreds of small islands in the western Pacific Ocean, north of the equator — by December.

If that seems like an overly ambitious schedule, don’t tell that to the small crew restoring the vessel. Capt. Ford, along with boat owner Ty Fields, said they simply need some help from the local community to get the Pacific Star ready for its voyage.

More about that later. But first, here’s how members of a Hawaiian-based youth service organization found themselves 5,000 miles away in Portsmouth.

The 60-year-old YWAM is a global movement of Christians from many cultures, age groups and traditions who reach out to more than 180 countries through evangelism, training and mercy ministry. Its ministries cover every sphere of society, including ship-based medical care, performing arts teams, Bible training programs, business coaching, sports ministries, anti-trafficking work, and more.

While the organization welcomes members of all ages, it primarily focuses on youth, and has tens of thousands of staff (called YWAMers) from nearly every country including places such as Indonesia, Nepal, Mozambique, and Colombia.

YWAM Ships Kona, of which Capt. Ford is a member, is just one part of the ministry, and it exists to serve isolated islands and remote shoreline villages through health and healing services.

“Community development and safe drinking water are big ones,” she said. “Health education, too. We do have primary health care, so possibly we’ll be able to help with immunizations and dental. That’s always one of the biggest thing they lack is dental. We have a couple of dentists who are part of YWAM and love to sail.”

YWAM has 22 vessels — small cruise ships, river boats and deep-sea yachts — serving in a wide variety of conditions around the world, working to improve the quality of life for isolated people.

“We have a couple of big — we call them medical ships — that have surgery suites on them and do major medical, but they can’t get into the little isolated places,” Capt. Ford said.

What brings them to Portsmouth?

That’s where Ty Fields and his Pacific Star come in.

“We’re here because the boat’s here,” said Capt. Ford. “Ty Fields and his family own the boat. Before they actually bought the boat, they had connections with YWAM through some other friends, so they talked to the director of our base in Kona and said, ‘We want to buy this boat, but we’d like it to be used for missions. Are you interested?’ And we said, ‘Yes, we are!’”

Mr. Fields bought the boat, built in 1989, about two months before COVID-19 hit the United States. It’s “kind of a mystery” how the vessel ended up at Hinckley, or when it first went on the market during the decade she’s spent there. He does know, however, that the previous owners offered luxury Caribbean and Mediterranean charters on the boat.

When he offered the use of his boat, he didn’t have any particular mission destination in mind. But just the day before, Capt. Ford said, Brett Curtis, president and CEO at YWAM Ships Kona, was laying his hands on a chart of the Micronesia region along with another man. They were praying for a boat.

“Since then, we’ve had some Zoom calls with people who are out in Micronesia that are with YWAM and who said they’ve been praying for 30 years for a vessel out there,” she said.

When preparations are complete, the crew plans to sail the Pacific Star from New England through the Panama Canal and on to Micronesia. Crew members will be working with a team of YWAM volunteers in Saipan and Palau to come alongside them and support their outreach efforts to the most remote Islands.

“So the goal with this boat is to go to an island with an airport, so we can have outreach teams fly in to that airport, and then go to the islands where you can get to only by boat,” Capt. Ford said.

The Pacific Star will provide doctors and dentists a comfortable place to stay after they fly in. “It opens the door for a lot of people who want to go and serve, but not full-time like Ann does. She can facilitate the transportation to get from point A and point B,” Mr. Fields said.

Besides providing health care and assistance with community development getting safe drinking water to the area, YWAM members will also be distributing Bibles in Micronesia, as well as offering Bible engagement. “They may have the Bible, but they don’t know how to apply it in their lives,” she said.

Who’s on the boat?

About six people will operate the Pacific Star, with the rest of the crew made up of students from YWAM’s School of Navigation and Seamanship. “Those students are getting hands-on experience and get to apply what they learn right away. We’ll start in the classroom and then sail on the boat,” Capt. Ford said. “Part of the goal is to champion the youth — that they can actually make a difference.”

Most of these students are between 18 and 25 and come from the U.S. and Canada. “We call this a second-level school, so in Youth With a Mission, the entry level for everybody is a discipleship training school. That’s 12 weeks of lecture phase and then two months of outreach. All these student will have already done that. It’s a time when they strengthen their faith.”

One of the crew members is 20-year-old YWAM member Levi Deane Thorson, who hails from Dallas, Texas. He’s been in Portsmouth since Aug. 16, helping to get the boat ready. “It’s been a big learning curve, being able to work on the boat and learning stuff that I haven’t learned before,” he said.

Mr. Thorson was supposed to be staffing a school in Hawaii as a mission team leader, but he couldn’t pass up the opportunity to hop aboard the Pacific Star.

“I felt that the Lord wanted me to take some time off and do this voyage,” he said. The navigation and seamanship school will give him RYA (Royal Yachting Association) certification to be a day skipper, which will help him in future missions, he said.

“I have a real love for the South Pacific,” said Mr. Thorson. “It will help me leverage my abilities to reach those people better. I’m incredible excited; I can’t wait. This is definitely an undertaking I never thought I’d have the opportunity to do, but I’m so blessed to have it.”

Before all that happens, however, the Pacific Star needs to be restored to its former glory. Although he bought the boat before COVID, the small work crew has been able to work on her for just three months total so far.

“It’s a lot of work, but we’ve been plugging away at it,” said Mr. Fields, adding that the people at Hinckley have been “super helpful” with help and advice. “Right now, there are four of us — that’s it. Last year we had more. We replaced all the steel structure on the main deck, pulled all the plywood and all the old teak off and replaced it.”

The glass in the pilot house was too thin for the long voyage the crew is taking, so he’s going to replace it with new glass that’s about an inch thick. The rust that’s built up over the past 10 years is another problem, while the vessel needs new electronics and a paint job.

In other words, the work on the boat provides a service opportunity for the local community. If you can volunteer in any way, contact Capt. Ford at 808/282-8782 or ann.ford@ywamships.net.

“We need everybody that can do everything between welders, people who understand paint, sanding, fiberglas fabrication, carpenters, electrical. It’s just a lot of hands-on stuff,” said Mr. Fields, who certainly knows his way around a boat but is more comfortable building homes.

“I do custom homes in Lake Tahoe. We do a lot of steel fabrication, heavy woodwork, timber framing — all of that. We’ve got the skills to do it, but everything has its own little quirks on how they come apart,” said Mr. Fields, who’s also restoring a home in Yountville, Calif. that was built in 1876. “Old things — you just need to fix them. I can look past the work. You just do it and you get it done and it will be a good boat again.”

While there’s been plenty of toil and sweat, the crew did get some good news one day.

“We thought we had to buy new main sails, because they were missing,” Mr. Fields said. “We had been looking four months for sails. One of the guys from Hinckley came by and said he saw the boat when it came out of the water. I said, ‘Do you know where my sails are at?’ He’s like, ‘Did you look in the sails loft?’ I didn’t know they had one.”

The employee went to look and came back with good news. “He said, ‘Yeah, there are three sails for your boat there.’ We took them out and rolled them out. They were all brand new. They had never even been on the boat. They were like $95,000 worth of sails.