In Portsmouth: Coverings of kindness

Every Student Initiative members create blankets for children with cancer

PORTSMOUTH — Young cancer patients at Hasbro Children’s Hospital will soon be a little warmer at night, thanks to members of Every Student Initiative (ESI).

In Portsmouth: Coverings of kindness

Every Student Initiative members create blankets for children with cancer 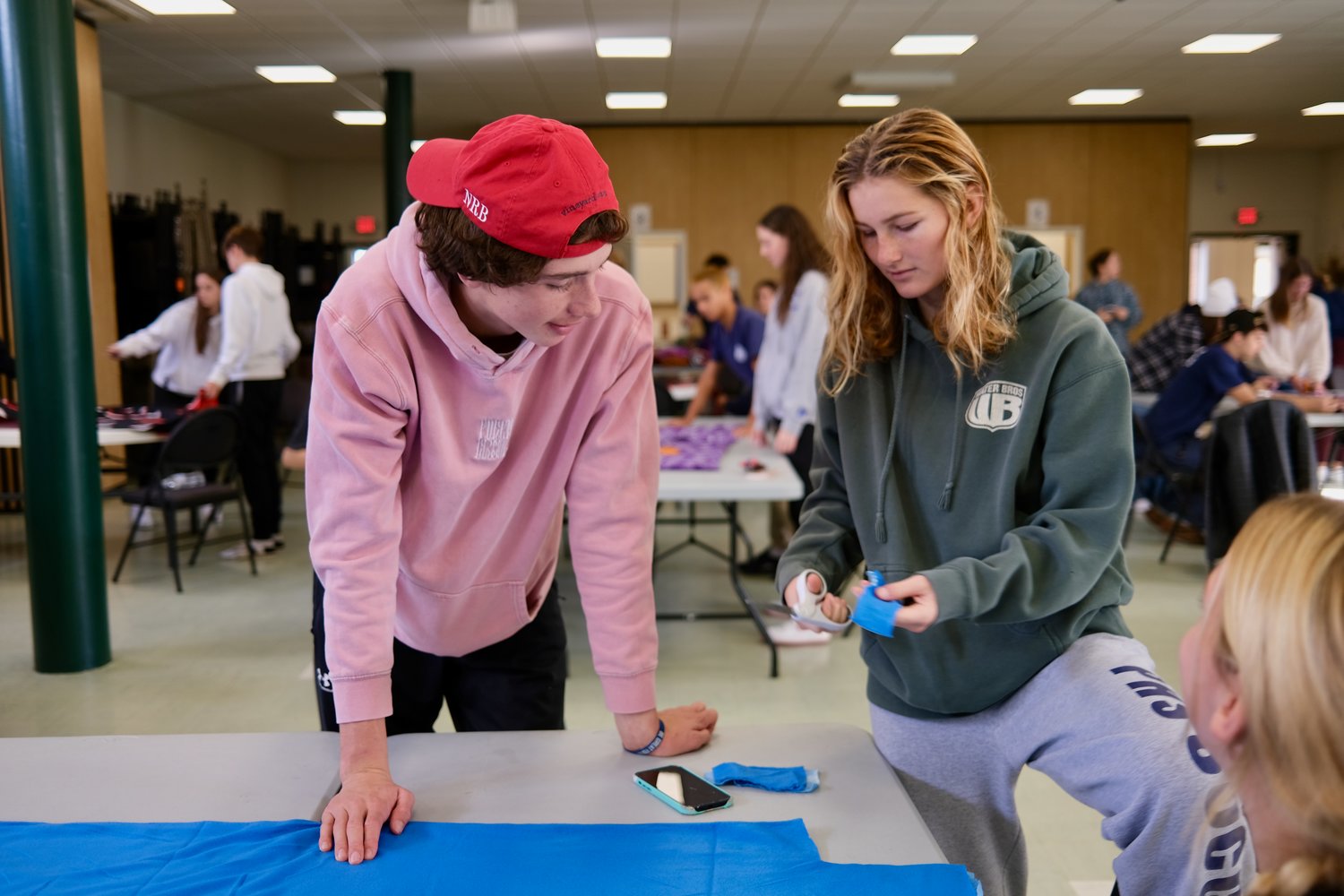 Every Student Initiative (ESI) members Charlie Townsend and Anna Conheeny discuss the best way of joining two pieces of material to make a blanket in the basement of St. Barnabas Church on Sunday. ESI has been making and giving away the blankets to children with cancer for the past four years.
Jim McGaw 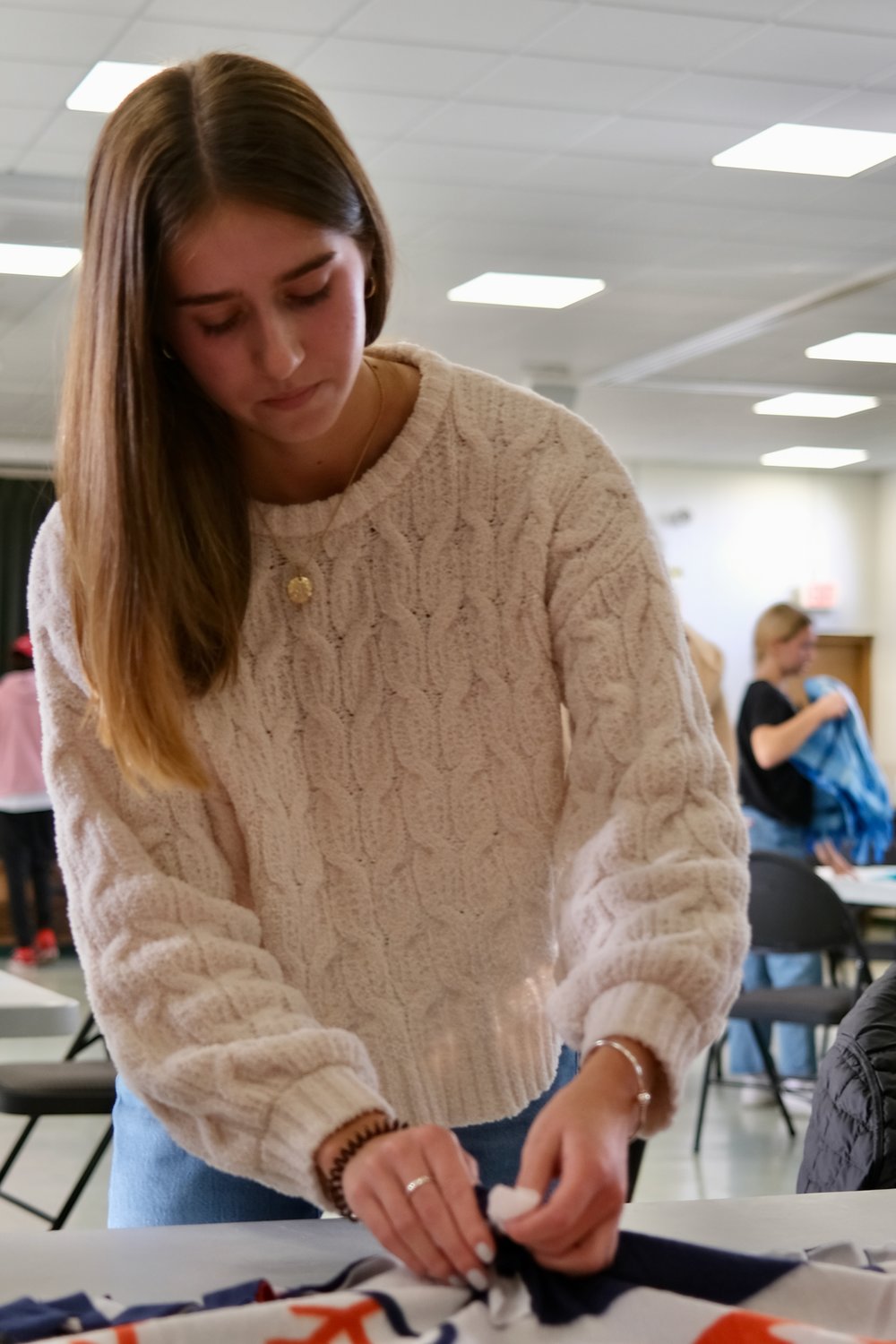 Abbie Dutra, the new president of Every Student Initiative, works on a blanket at her table.
Jim McGaw 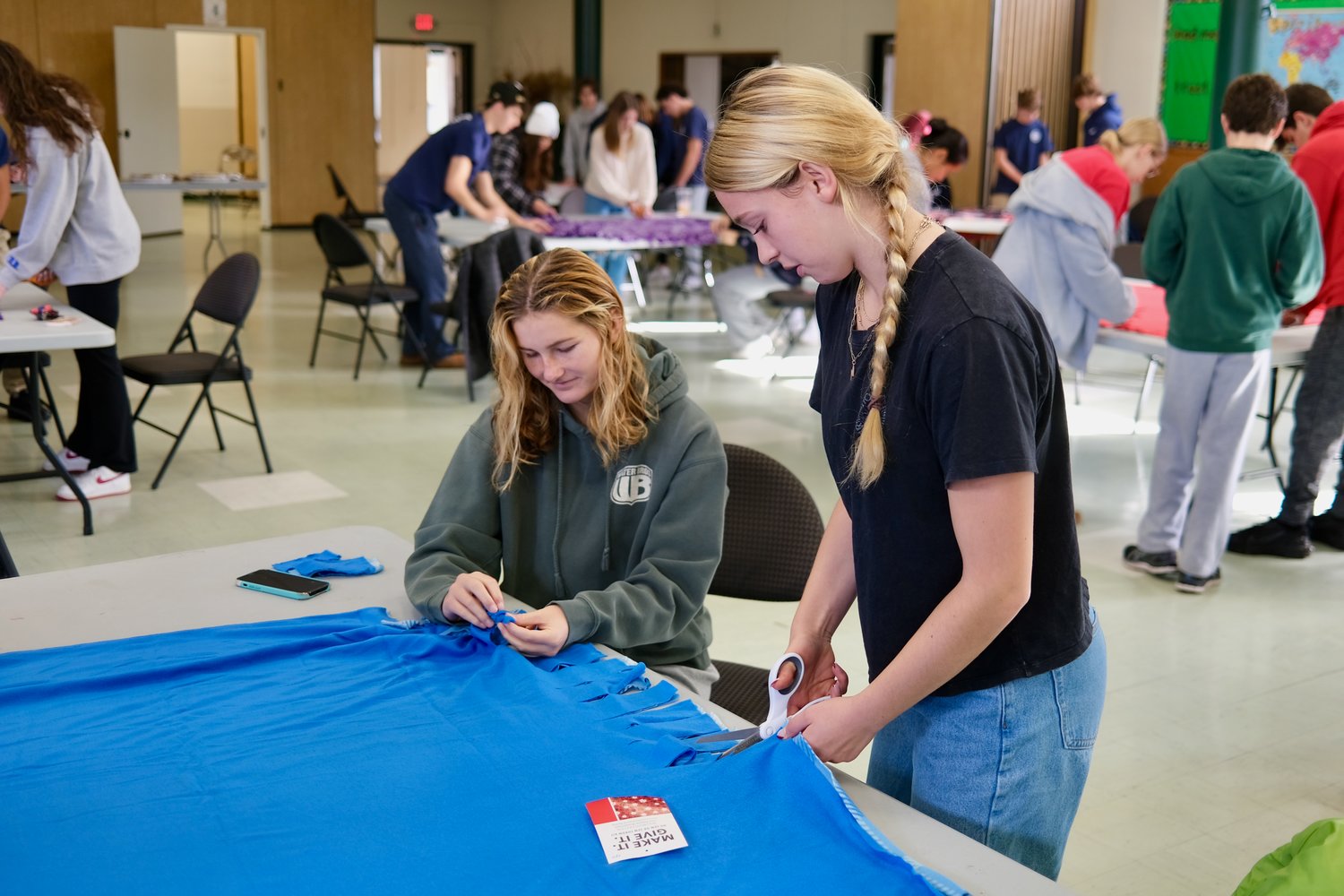 PHS senior Anna Conheeny and freshman Marin Goodfriend work on a section of a blanket together.
Jim McGaw 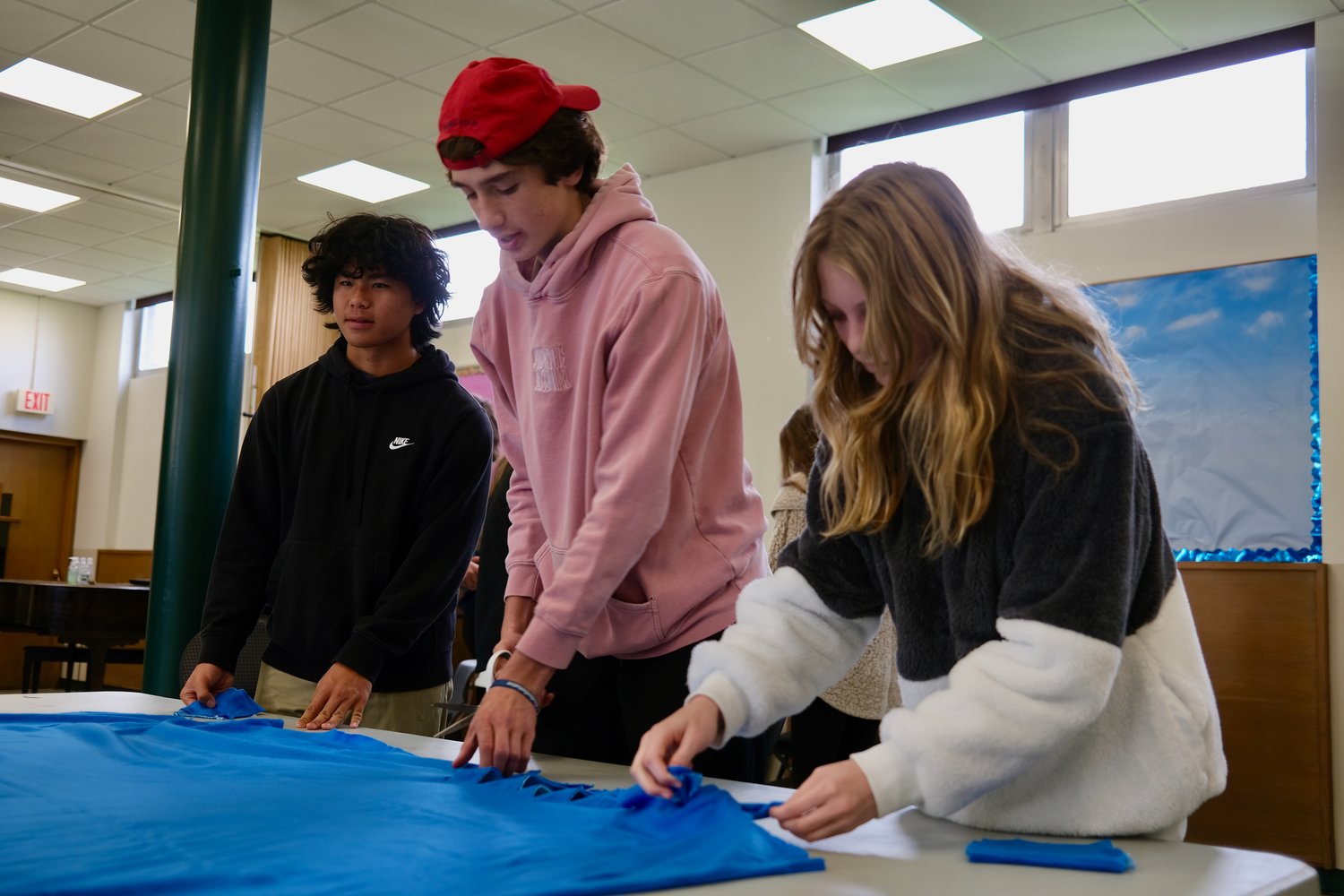 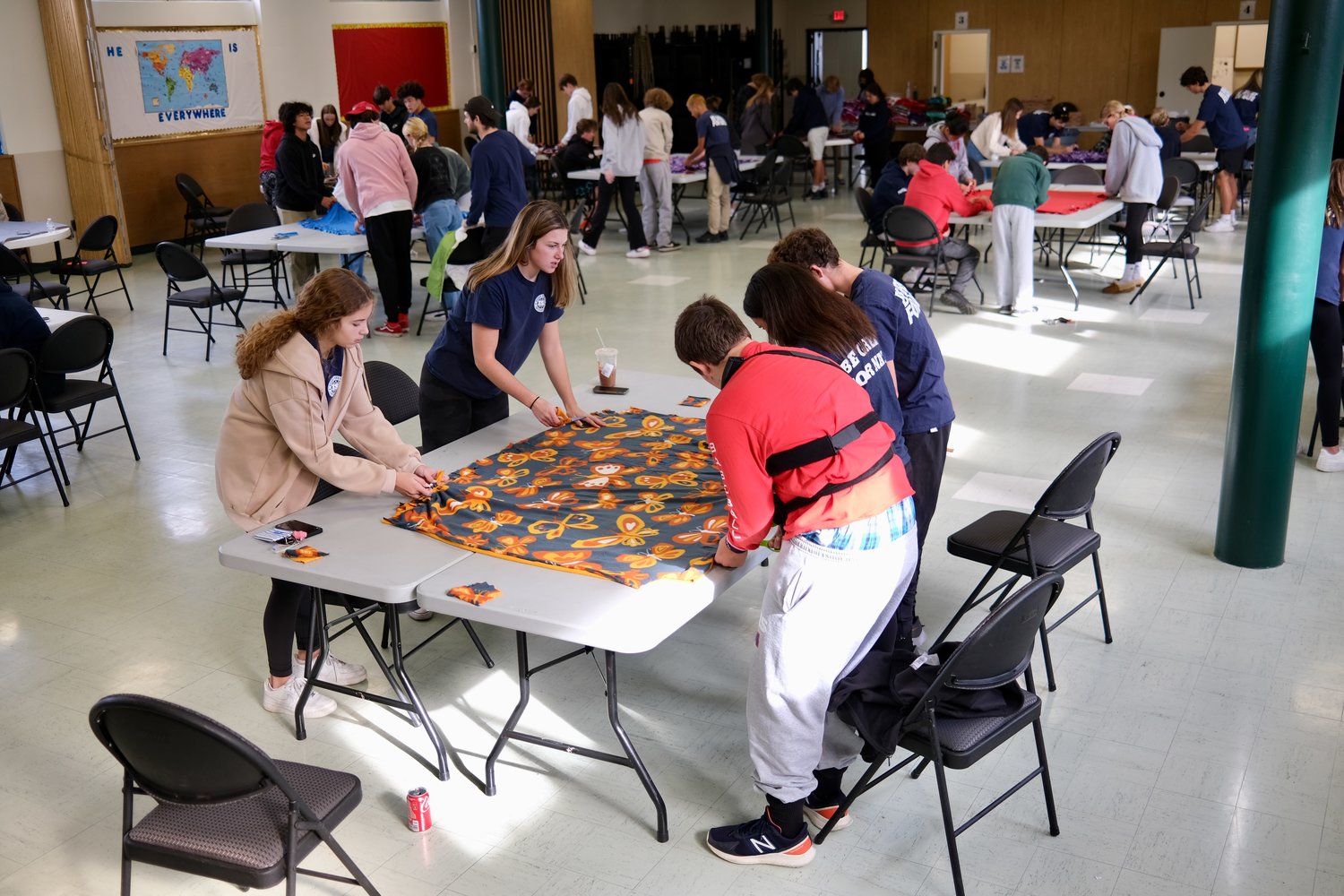 About 80 Every Student Initiative members turned out to St. Barnabas Church on Sunday to make blankets for children with cancer.
Jim McGaw
Previous Next
Posted Tuesday, November 16, 2021 8:01 am

We want to help them out during the holidays because they don’t get the same attention that other kids do.”
Andrew Perry, senior member of Every Student Initiative
By Jim McGaw

PORTSMOUTH — Young cancer patients at Hasbro Children’s Hospital will soon be a little warmer at night, thanks to members of Every Student Initiative (ESI).

About 80 members of ESI, made up of high school students who work to bring about more awareness on mental health and substance abuse issues in the community, spent a couple hours in the basement of St. Barnabas Church Sunday creating no-sew blankets that will be distributed to hospital patients.

“For the past four years, we’ve been making blankets to send to hospitals for kids who are suffering from cancer,” said Andrew Perry, an ESI member and senior at Portsmouth High School. “We want to help them out during the holidays because they don’t get the same attention that other kids do. It’s just something nice we can do for the community.”

The group uses money from its community events service budget to purchase materials from Joann Fabrics, according to Steven Peterson, executive director of ESI, which falls under the umbrella of the nonprofit Be Great for Nate.

“There are two pieces of the fabric. You cut the corners and then cut slits into them and then tie them together to make one big blanket,” Andrew said. “We make them, then package them up and send them back to the hospitals for the kids to have.”

ESI sent the blankets to Hasbro for the first two years of the program. Last year they went to Newport Hospital, but the gifts are heading back to Hasbro again this year.

According to Peterson, there are currently about 120 members of ESI, but that number will be growing soon.

“We’re going to start our middle school program led by high school kids, probably after the New Year. We have to get some high school kids trained to be the mentors for that,” he said.

Added PHS senior Abbie Dutra, the new president of ESI who was working on a blanket at her table, “We’re starting a middle school program because I think it’s important for the young kids to get involved, as well as the other kids at the high school who are not.”

One new ESI program that has proved popular this year is Friday Night Lights, where students have gathered after PHS football games at West Main Pizza. The idea is to provide young people a healthy and safe gathering spot as an alternative to attending an unsupervised party where they could be pressured into consuming drugs or alcohol.

“We started up something called the Substance Abuse Prevention Team, and that’s a group of high schoolers who vowed not to use substances,” Peterson explained. “They thought it’s not effective to pay to have a speaker come in to the schools; it doesn’t work. You tell kids not to do drugs, and it doesn’t mean they’re not going to; they may want to do it more because of that. We need alternative activities. Give then alternative experiences in the community, so on a Friday night they don’t feel that pressure at a party where there’s drinking and they have a safe place to go.”

He noted that after a high school football game, there’s not much else going on in Portsmouth.

“We talked to Gary Rahilly, the owner of West Main. He said that back before social media, that was the place to go after a game. People met up there before they went somewhere else. So we said, let’s bring it back,” he said.

ESI hosted Friday Night Lights at West Main Pizza every Friday in September and October, averaging 80 kids for each event.

“It went so well, the kids wanted it more, so we’re doing it twice a month for the entire year now. In September and October, it will be every week. But we want to expand out and not just do something at West Main. Maybe we’ll rent out a movie theater, or ice skating — just something for kids to do,” Peterson said.

Dutra, who has lived her whole life in Portsmouth, said the series of pizza place gatherings has been a welcome addition to the social scene for local teens.

“I think the Friday Night Lights program is a really good way for students to find something to do without turning to substances,” she said. “We live in a really small town and there aren’t a lot of things to do, so this is a great way to give kids a place to go.”