Brooke Sowa throws a pitch in the second inning. 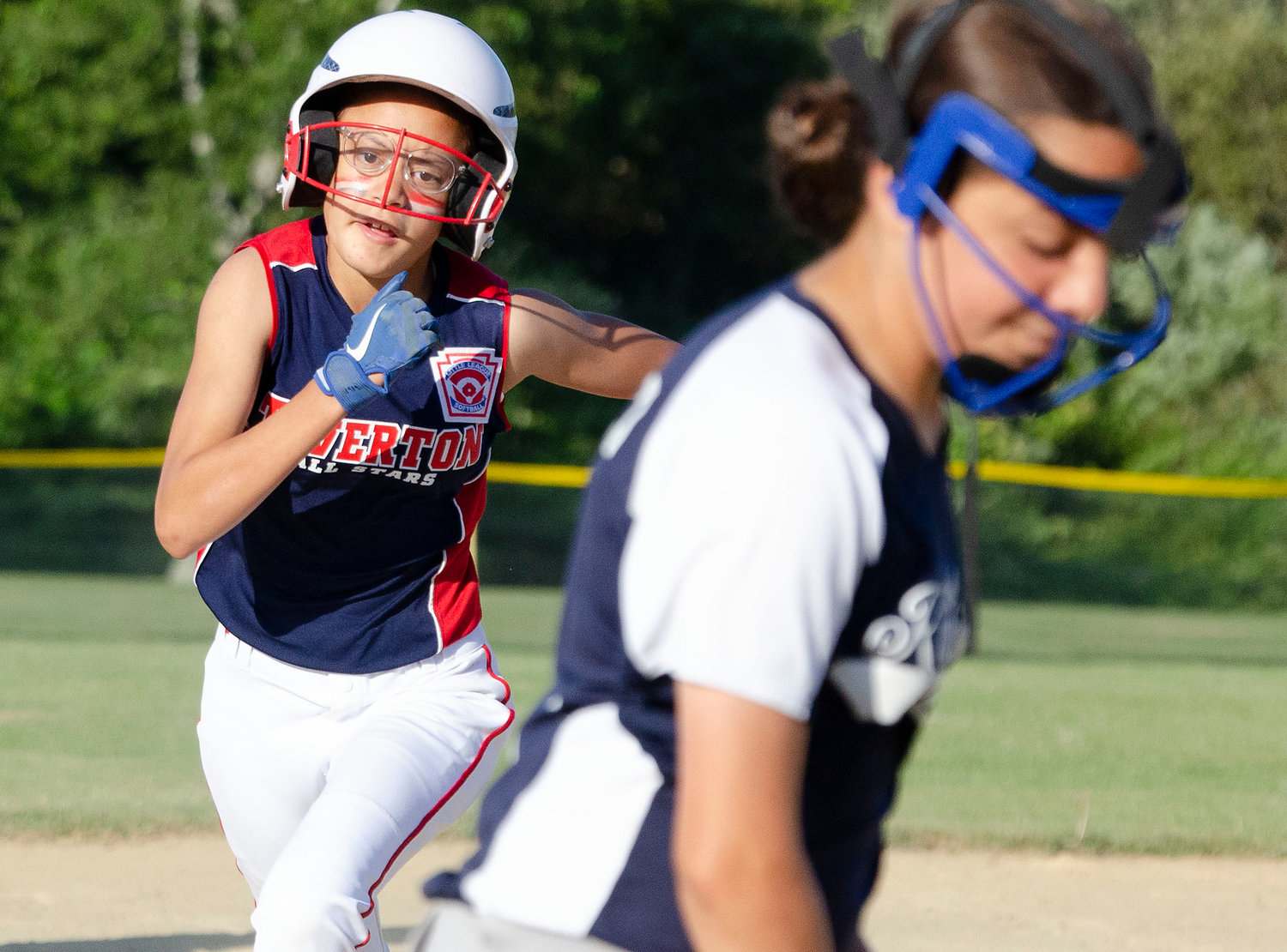 Kristina DeCotis takes off for third base on a hit by Brooke Sowa. Kristina DeCotis chats with Coach Mike Martin while standing on third base. She drew three walks and scored twice during the game. 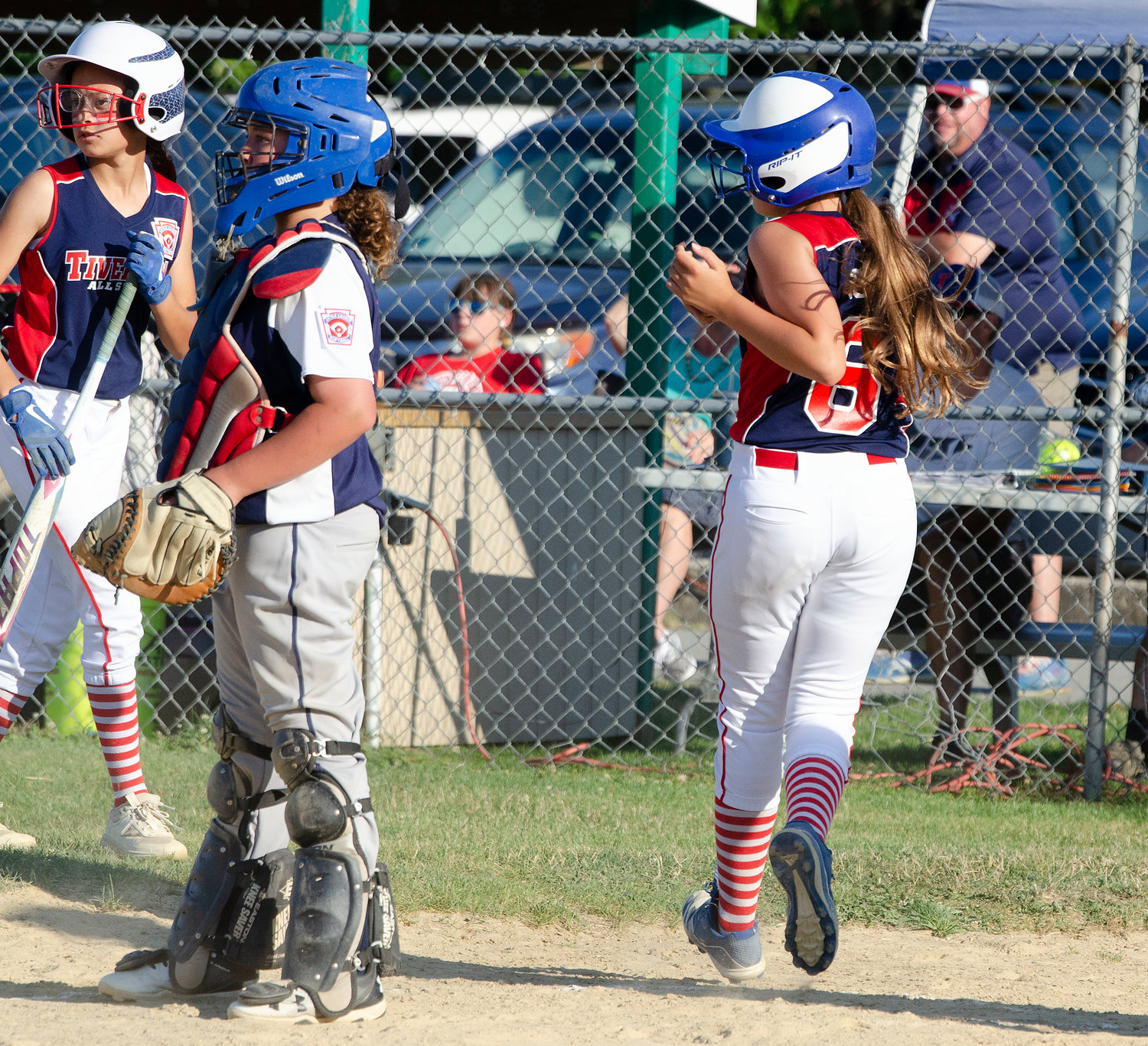 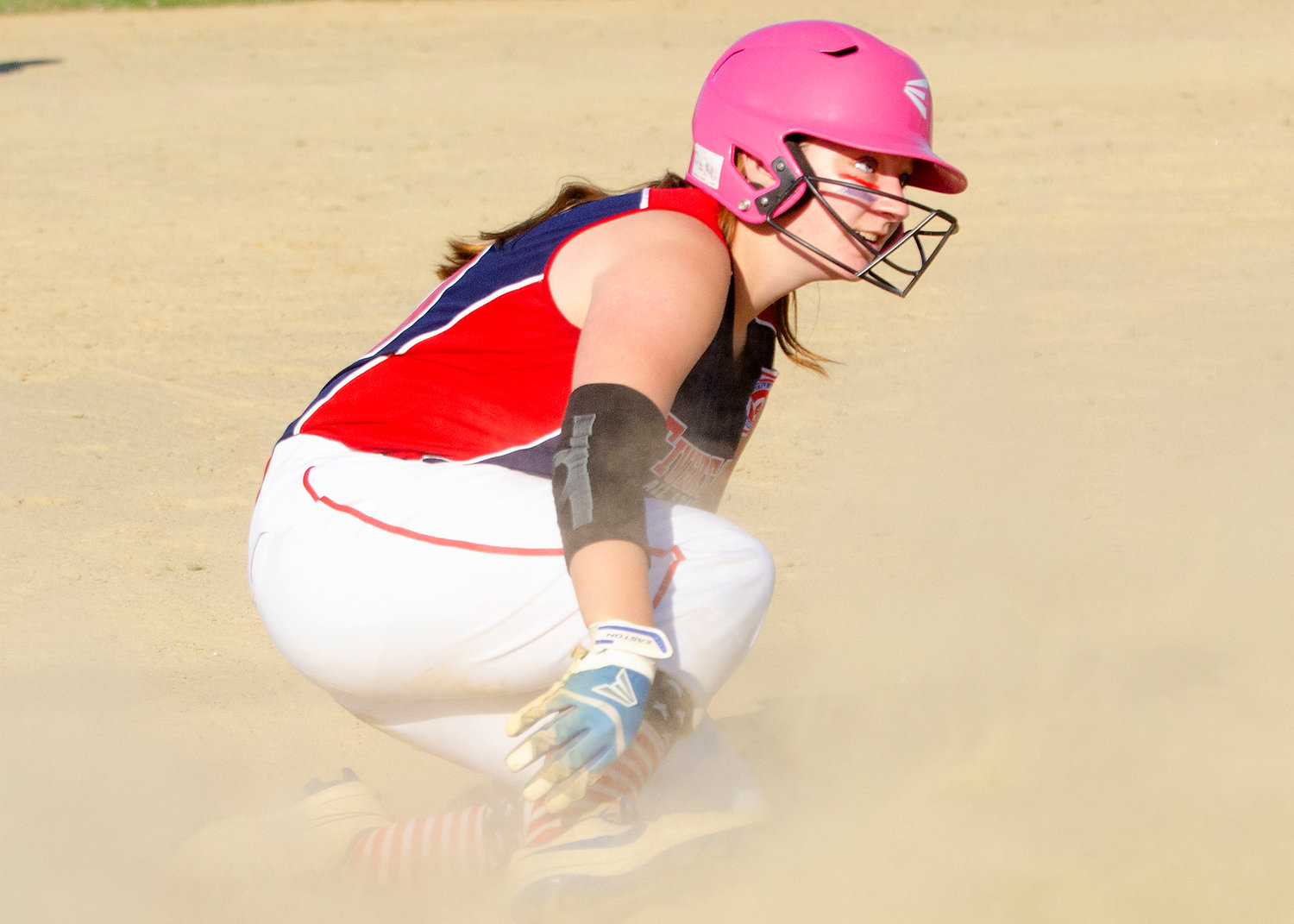 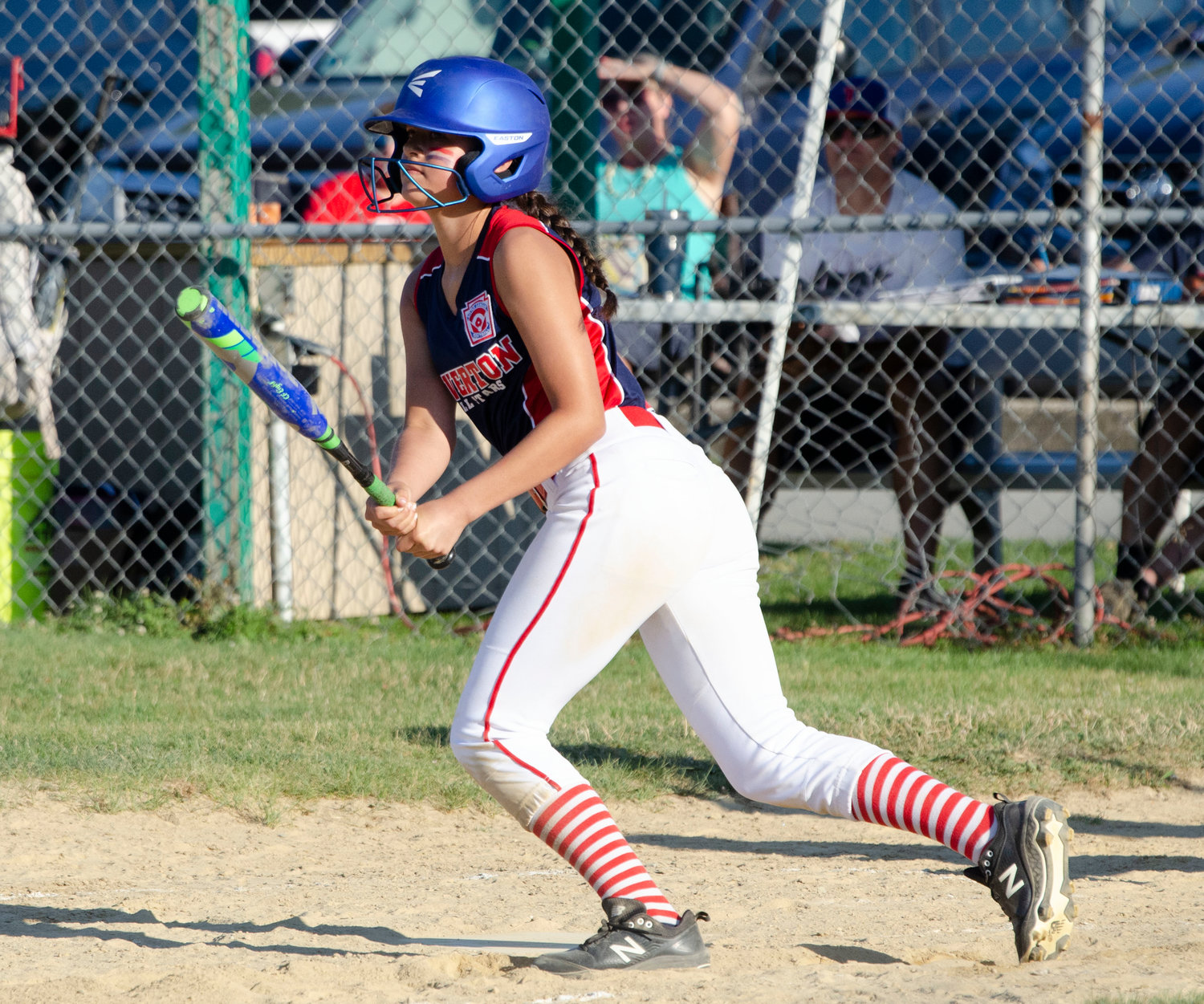 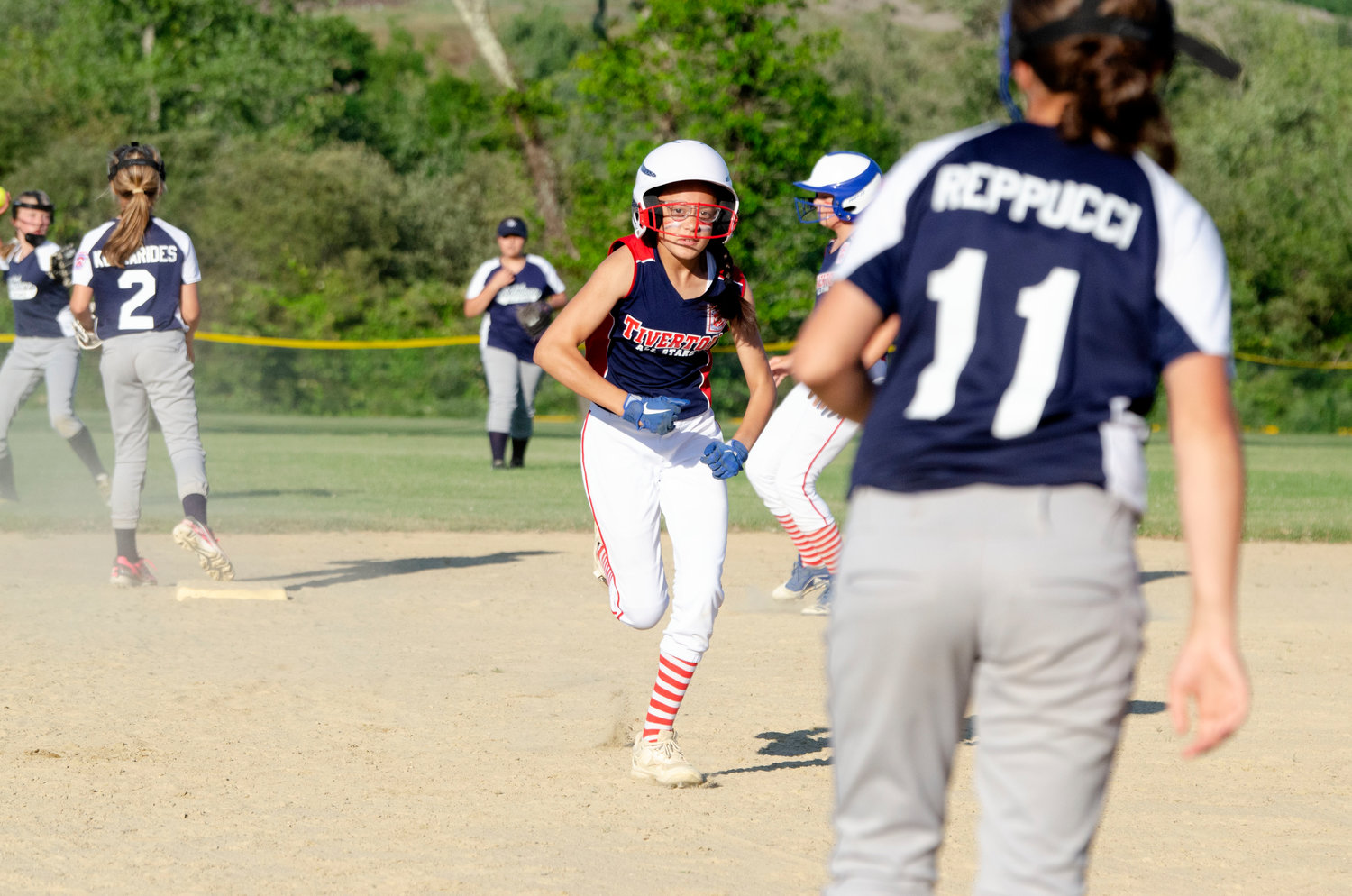 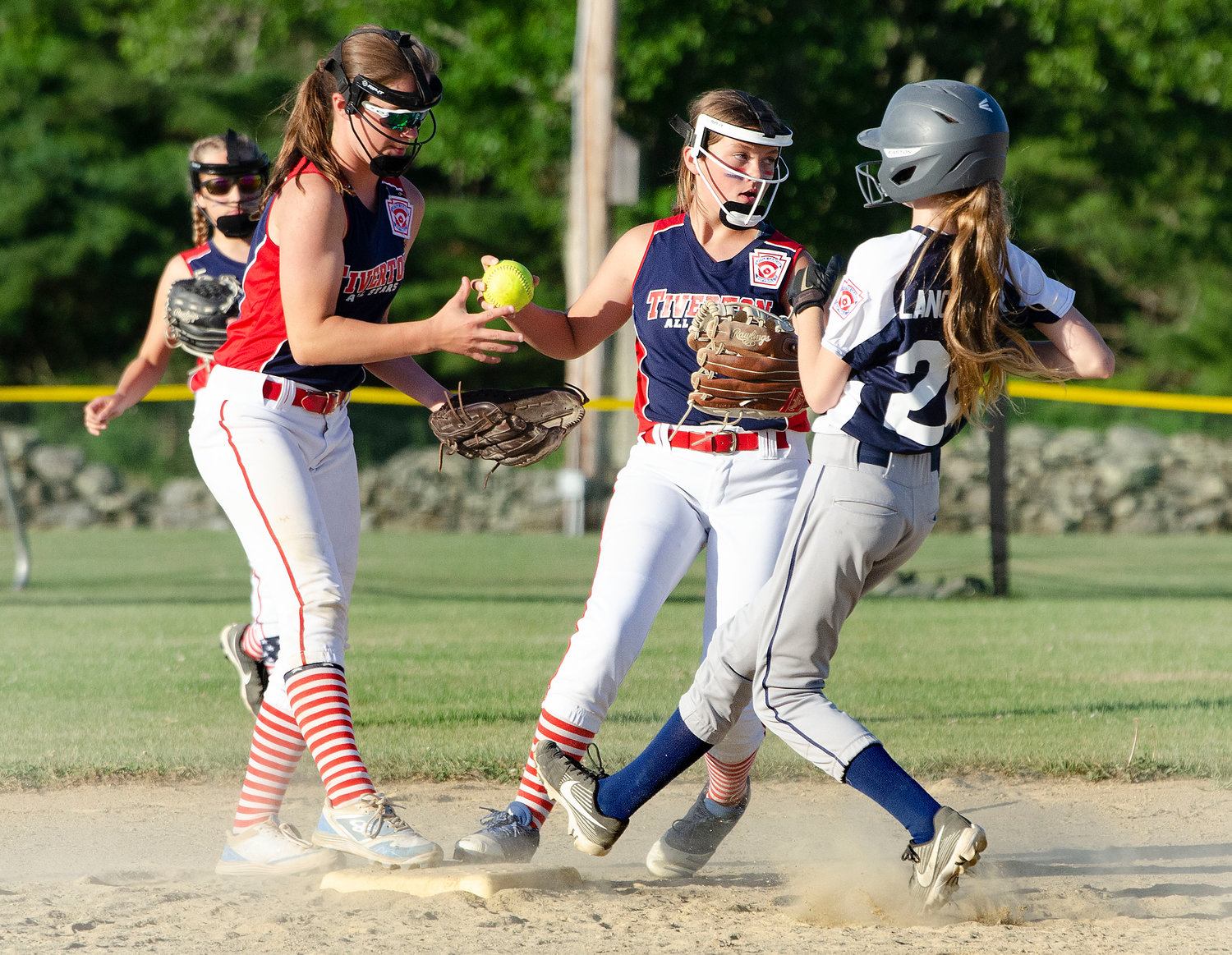 Shortstop Elodie Cannon (left) looks on as second baseman Brooke Sowa steps on second for an out and prepares to throw to first for a double play. 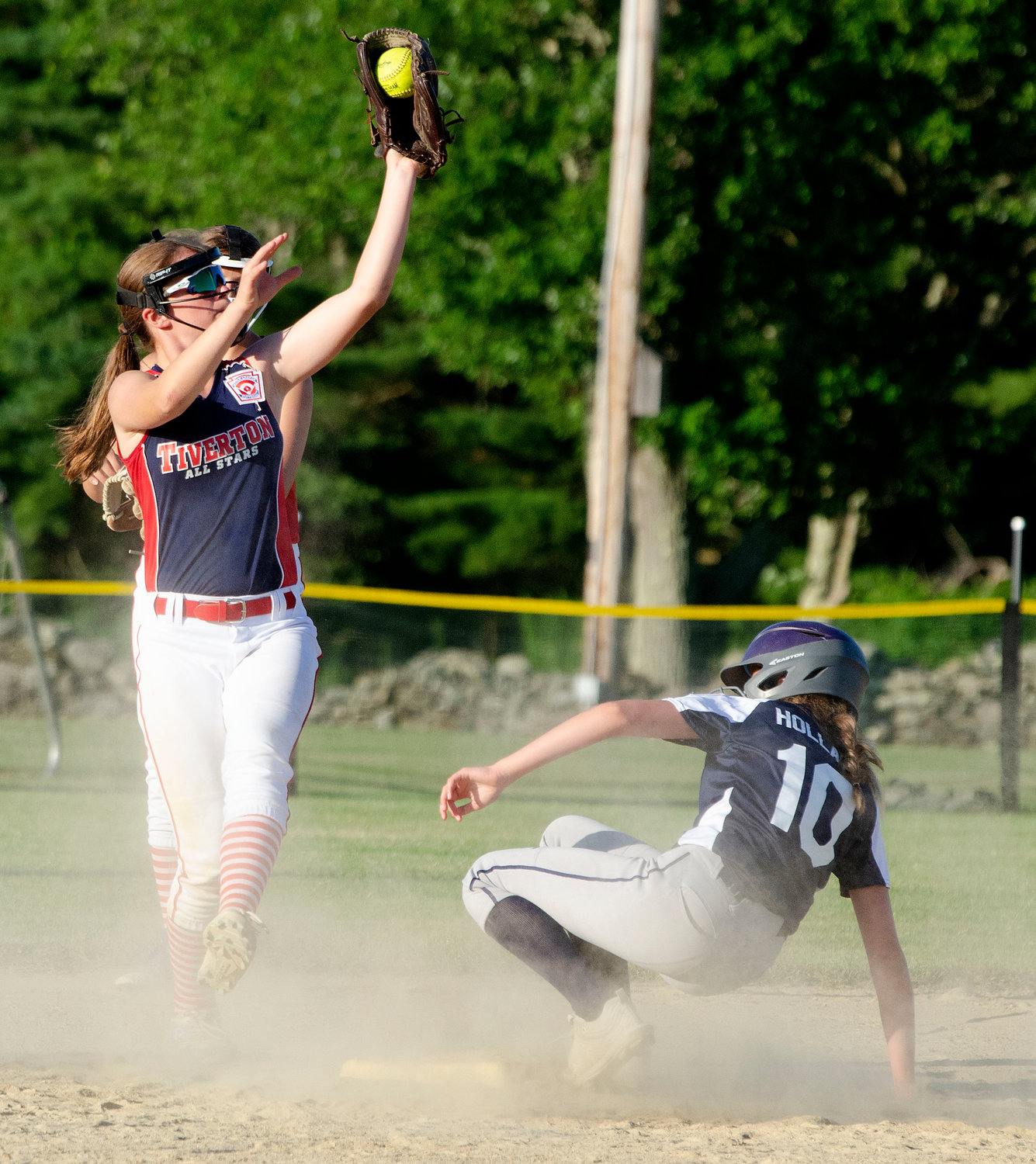 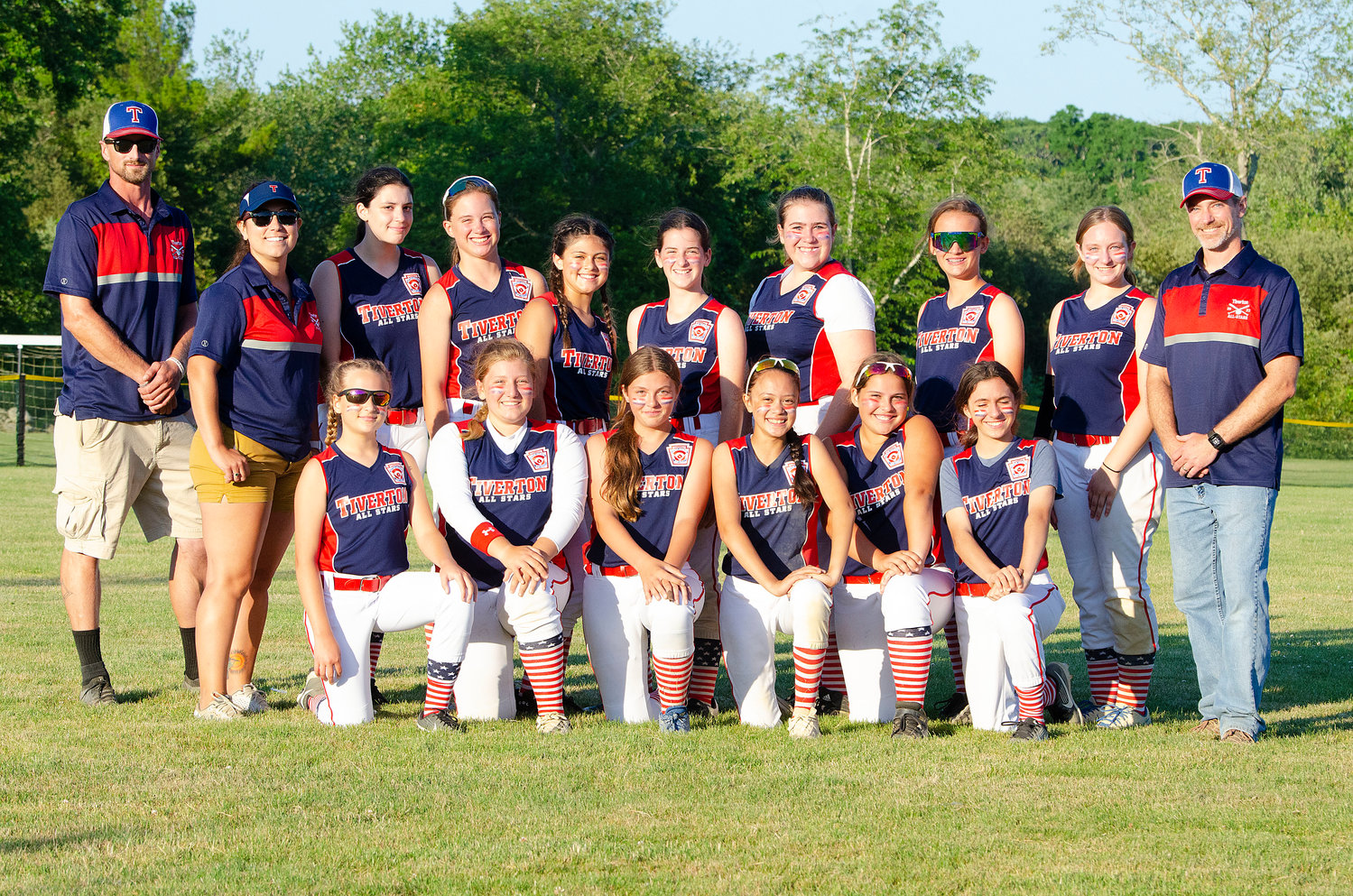 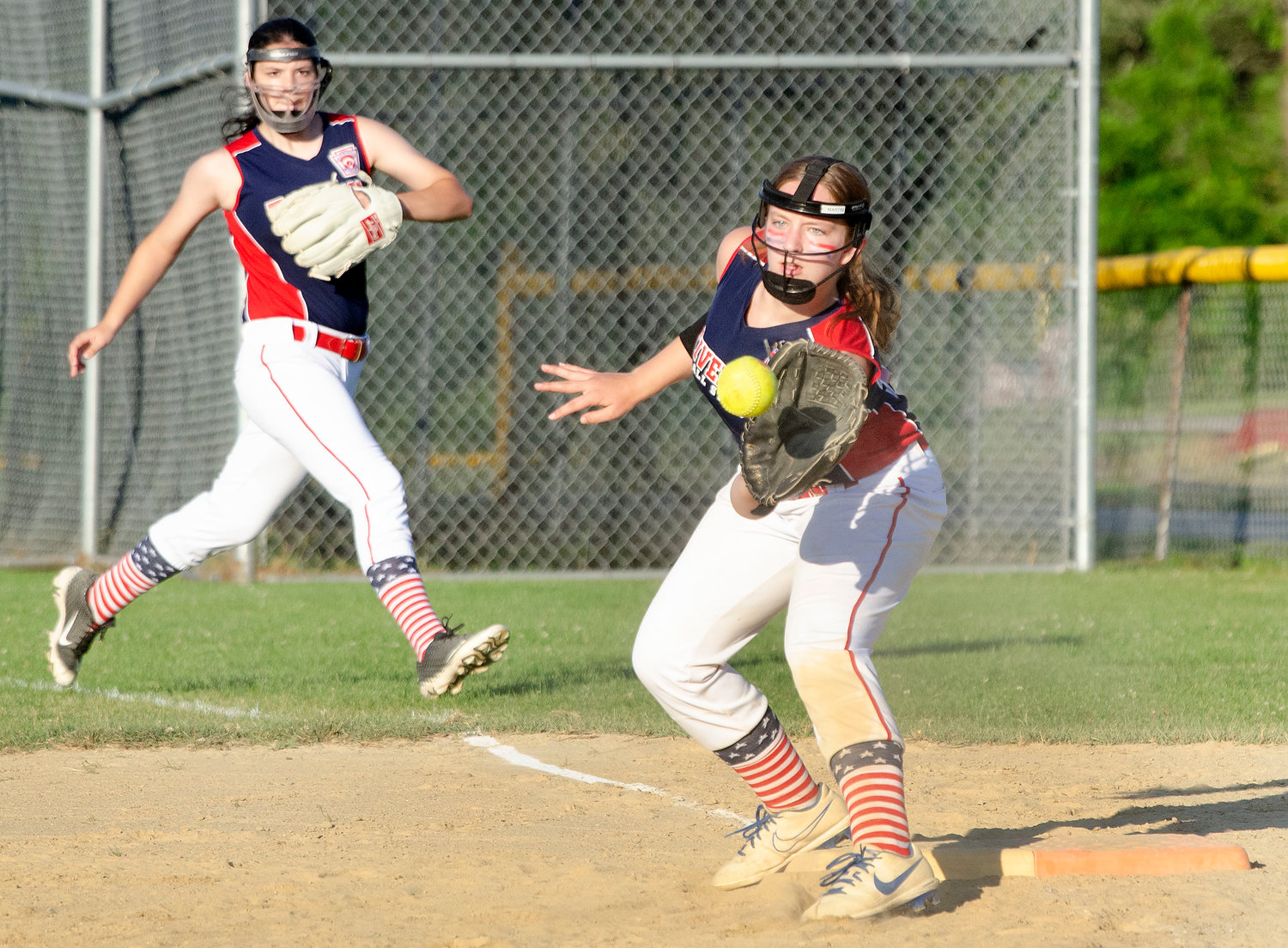 Right fielder Isabella Halstead (left) backs up first baseman Carlie Martin as she takes a throw from third baseman Paisley Parisee to record an out. 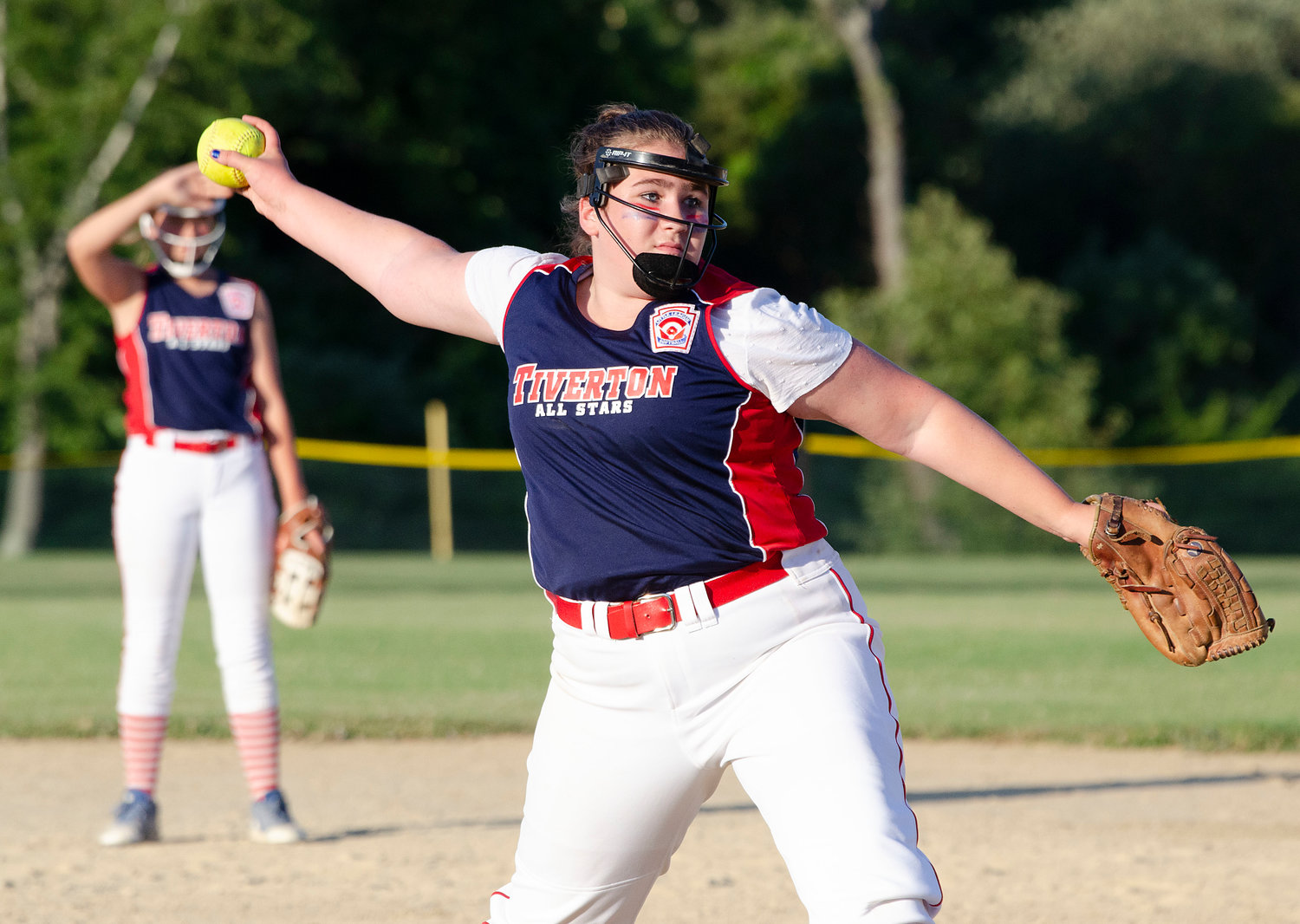 Addie Wolfe makes a pitch in the third inning of the game. 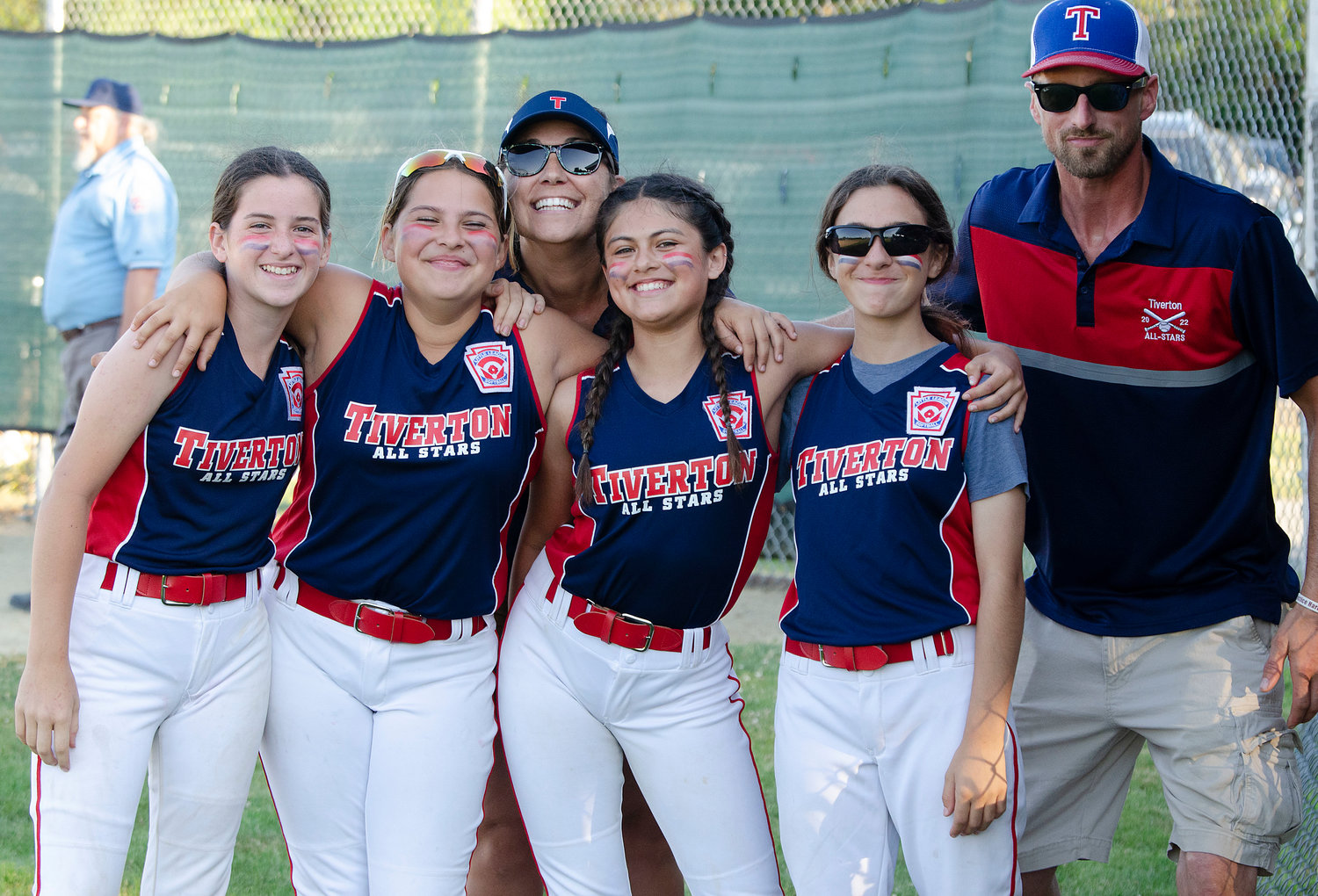 Kristina DeCotis swings at a pitch during the game.
Previous Next
Posted Tuesday, July 12, 2022 10:01 am

They were all mercy rule games similar to tonight. In all three games that we played (for the state title) we outscored the teams 59-7. It’s been pretty lopsided.”
Tiverton head coach Mike Martin
Story and photos by Richard W. Dionne, Jr.

The Tiverton 11-12 girls softball all-stars smashed 13 hits and stole 15 bases in crushing South Kingstown 23-1 in three innings to take game one of a best of three series to win the state championship at Town Farm Field in Tiverton on Monday night. The team can clinch the title by taking game two on Wednesday at Town Farm Field at 5:30 p.m. The state champs will play for the regional championship in Bristol, Ct. later this month. Tiverton went 3-0 beating Portsmouth and Barrington twice to win the District 2 championship for the right to play South Kingstown for the state title.

“They were all mercy rule games similar to tonight,” said Tiverton head coach Mike Martin. “In all three games that we played (for the state title) we outscored the teams 59-7. It’s been pretty lopsided.”

“I’m a big proponent of that,” said Coach Martin. “We want to be really aggressive on the base paths. They will take risks sometimes, but we are trying to teach them to be intelligent ball players. A lot of them know what to look for and how to capitalize on any mistakes that they see on the field.”

Pitchers Brooke Sowa and Addie Wolfe combined for three strike outs, a walk, a hit batsman and allowed just one hit and one run. The Tiverton defense played errorless ball behind them and accounted for six of the nine outs.

“We open the game with Brooke and close the game with Addie,” said Coach Martin. “Brooke is a steady pitcher with a strong arm. She’s really developed a lot over the last couple of years. Addie has a strong arm and a good fastball. It’s just been clicking at the right time for them.”

The team consists of pitchers Sowa and Wolfe, Matin at first base, Abby Gilfillen in centerfield, Elodie Cannon at shortstop, Kaylin Aubuchon at catcher, Paisley Parisee at third base, Sophia Morales at second base, Chloe Oliveira at right field and Lilliana Luis at left field with subs, Kelsey Conway, Isabella Halstead and Kristina DeCotis. Most of the players are from Tiverton, though the team draws from Little Compton and Fall River as well. Assistant coaches Jess Silvia and Nate Carelton help out Coach Martin with the team.

The team is just as strong defensively as they are offensively and don’t seem to have a weak spot on the field.

“They see a lot of ground balls during practice,” said Coach Martin. “Ground ball work every day, all day. They get tons of reps. They groan a lot during practice. But it pays off in the games. I couldn’t be more proud of them.”

“We have a great group of girls all the way around,” he said. “A lot of the girls have been playing together since they were little. We are looking forward to seeing what we can do with the rest of the season.”