Portsmouth Patriots are going to the Super Bowl!

They beat Cranston West, 20-7, in a windy semifinal matchup

Portsmouth Patriots are going to the Super Bowl!

They beat Cranston West, 20-7, in a windy semifinal matchup 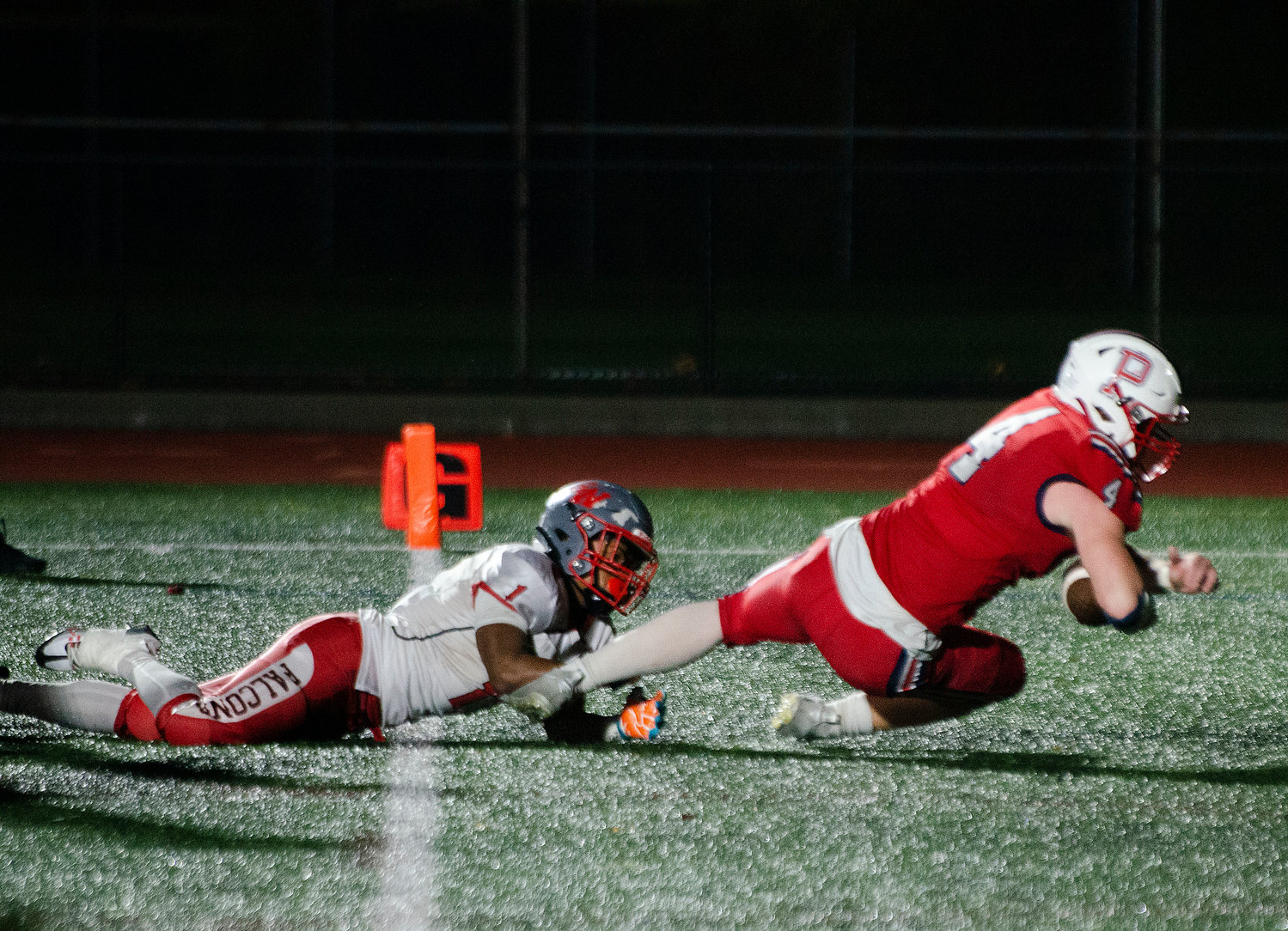 Portsmouth High’s Neal Tullson plunges into the end zone for the Patriots’ third score of the night during the Division II semifinals against Cranston West at home Friday night. The Patriots won, 20-7, and advanced to play in the Super Bowl against St. Raphael Academy at noon on Saturday, Nov. 12, at Cranston Stadium.
RICHARD W. DIONNE, JR. 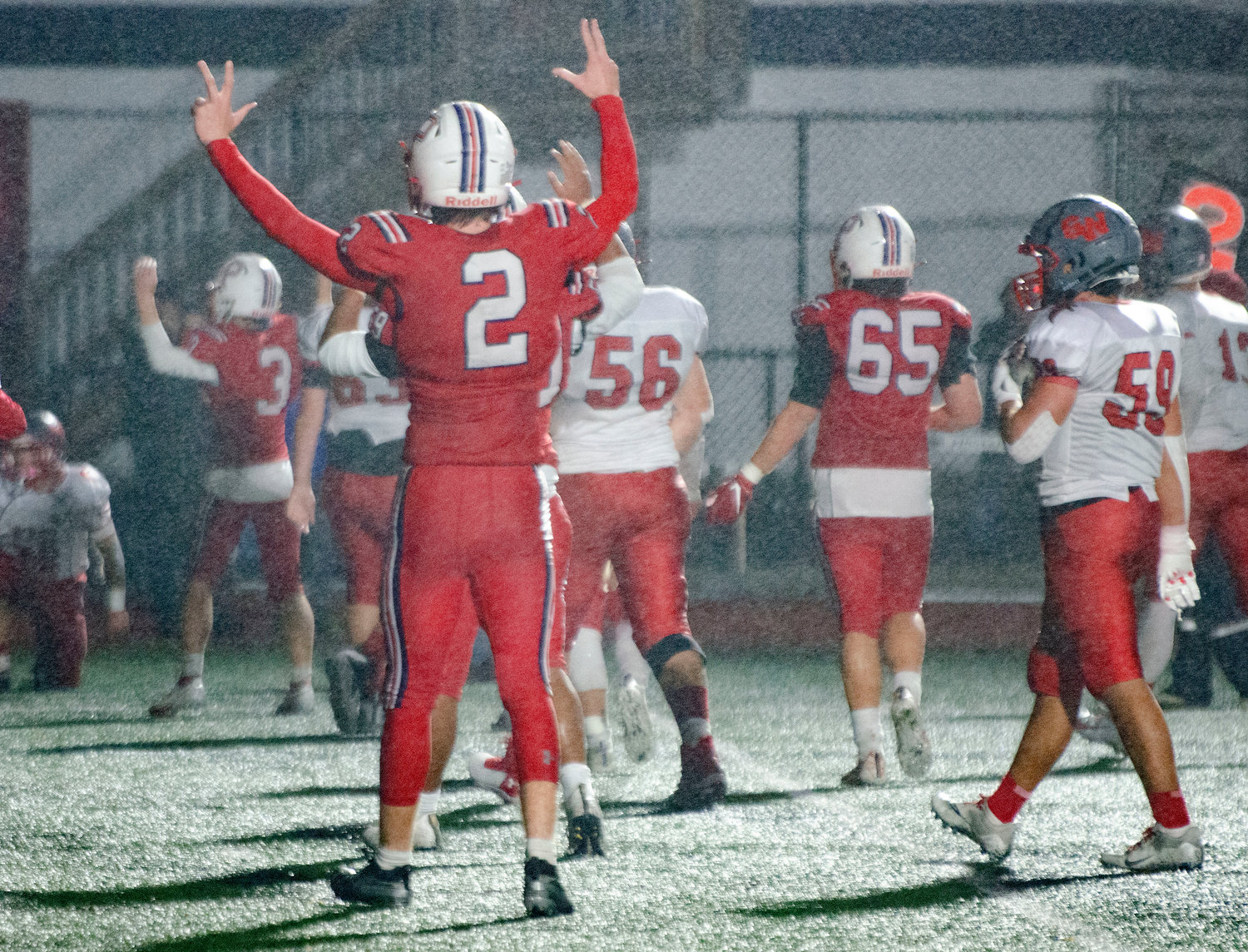 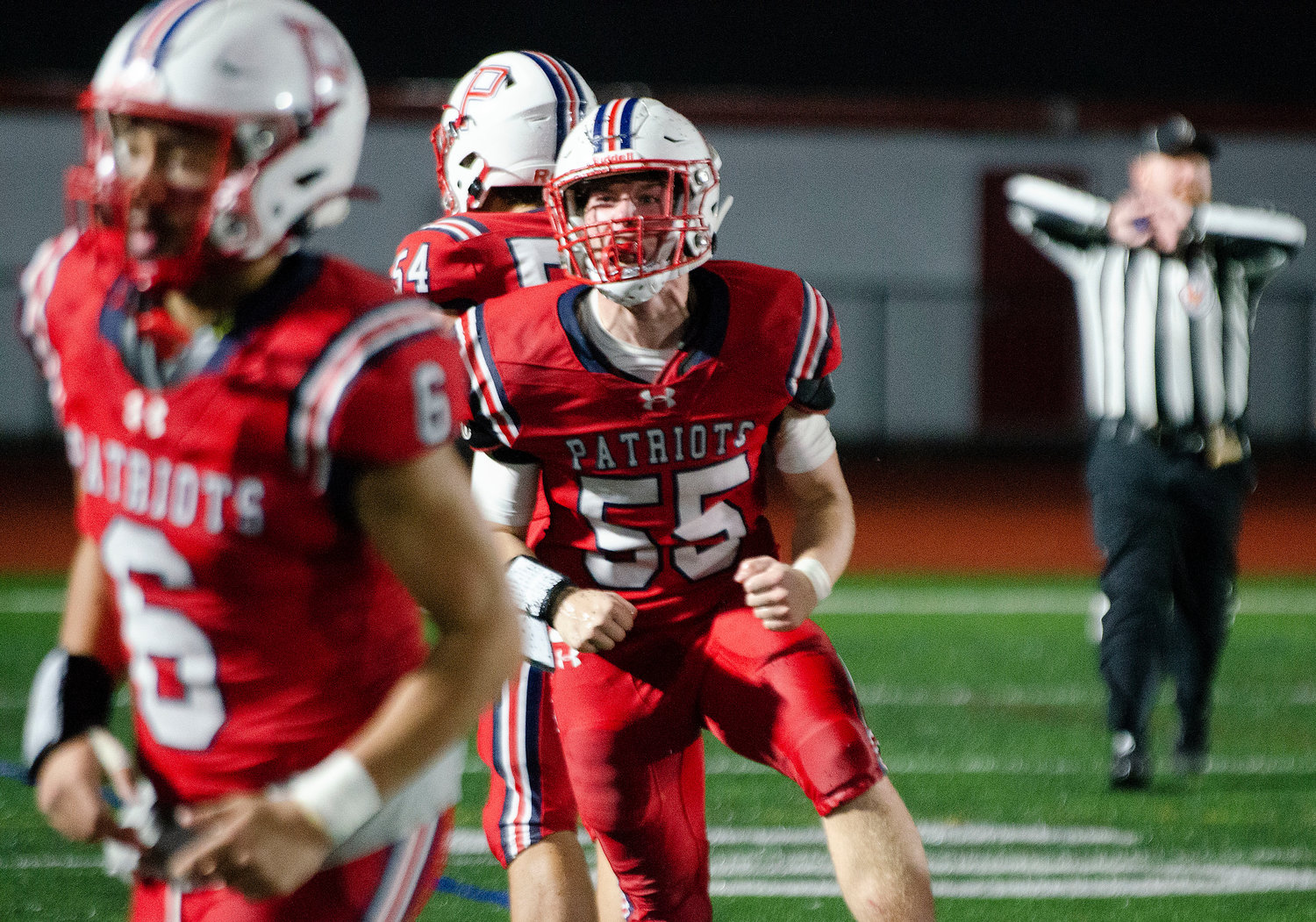 Huntley Almeida celebrates after the Patriots convert on a big fourth down play in the second half that led to their second touchdown.
RICHARD W. DIONNE, JR. 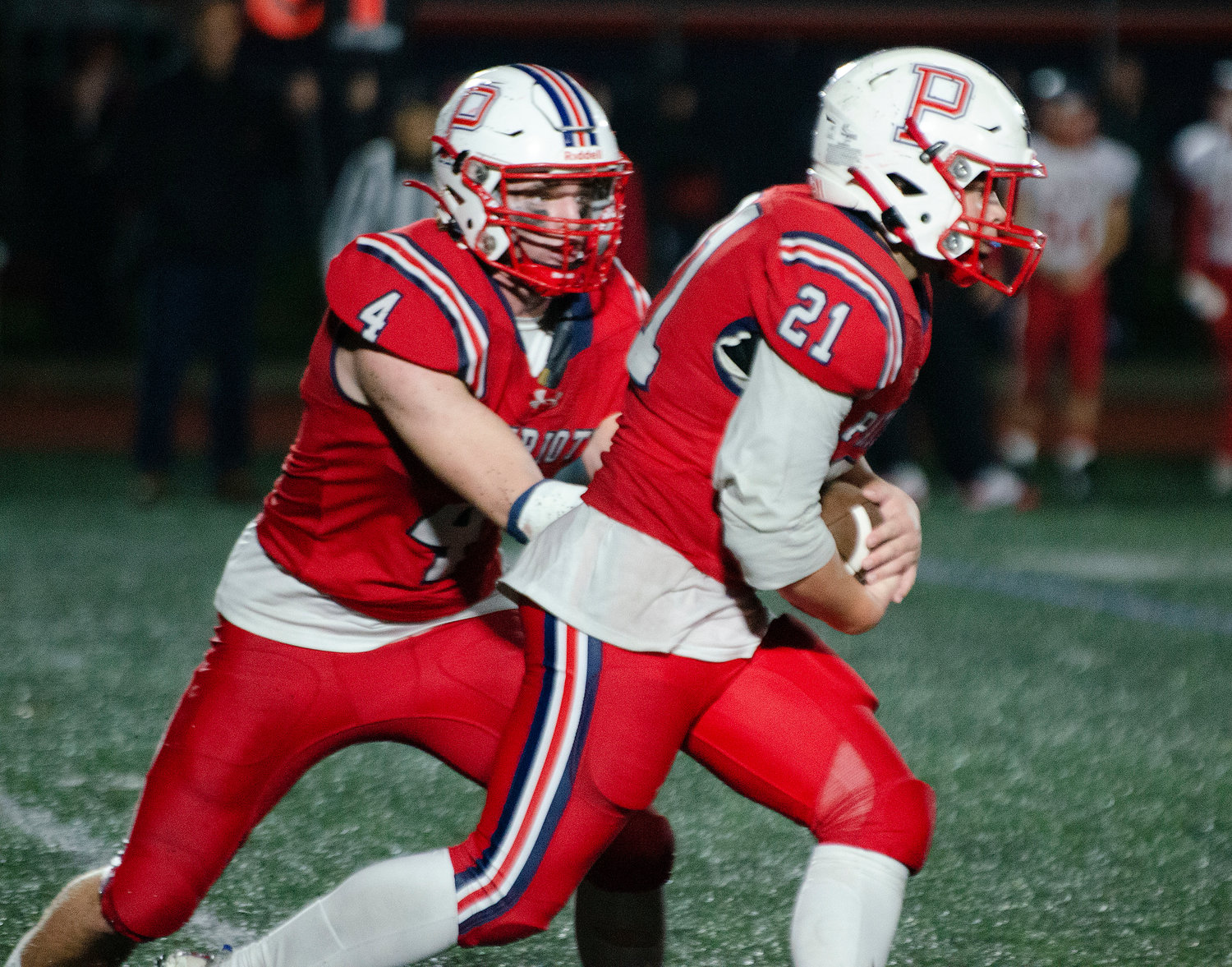 Shane Harvey takes the ball from Neal Tullson for a big game in the second half.
RICHARD W. DIONNE, JR. 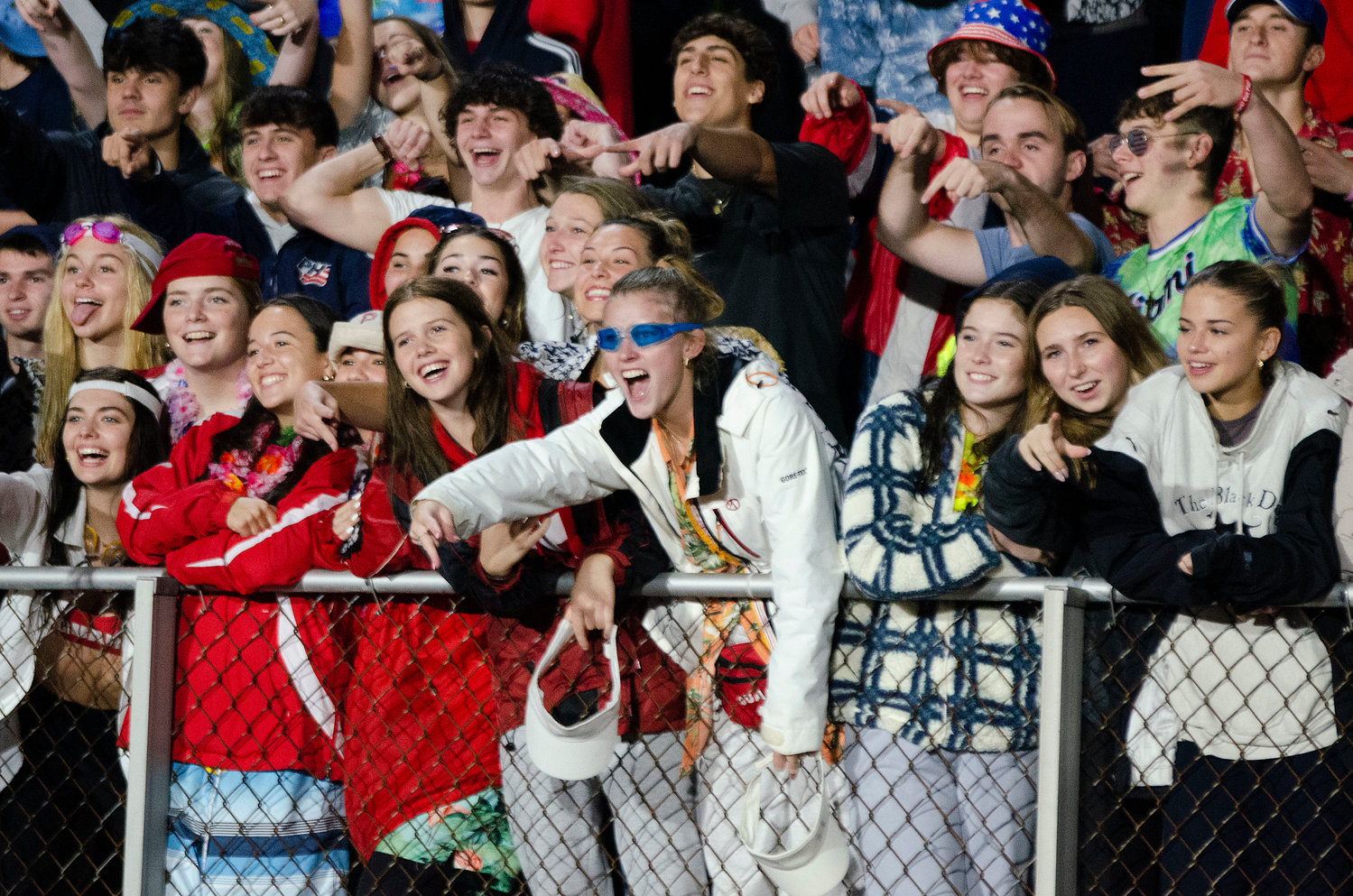 The Portsmouth fans cheer on the team after their third touchdown.
RICHARD W. DIONNE, JR. 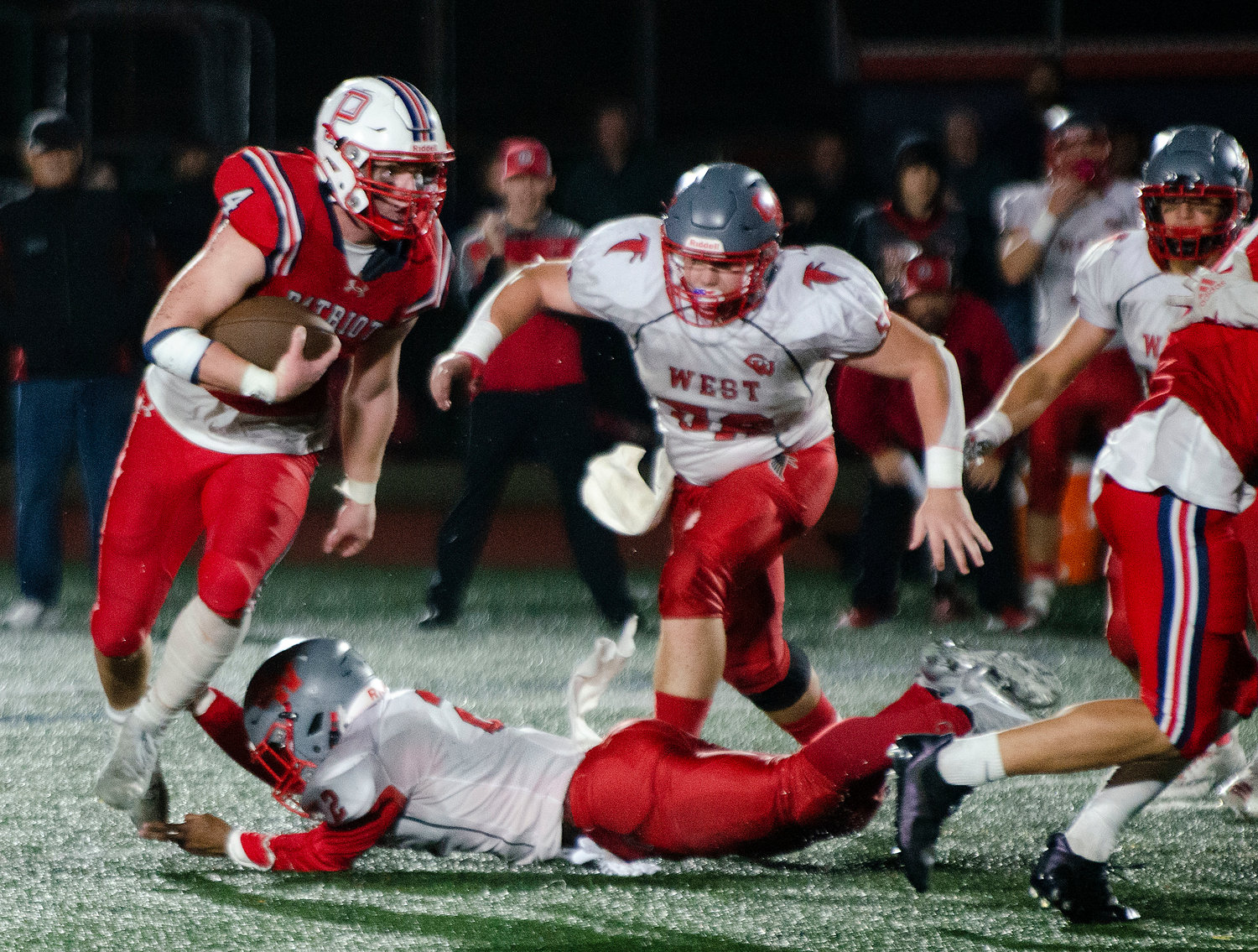 Neal Tullson takes off around the end for a big gain in the second half, leading to the Patriots’ third touchdown.
RICHARD W. DIONNE, JR. 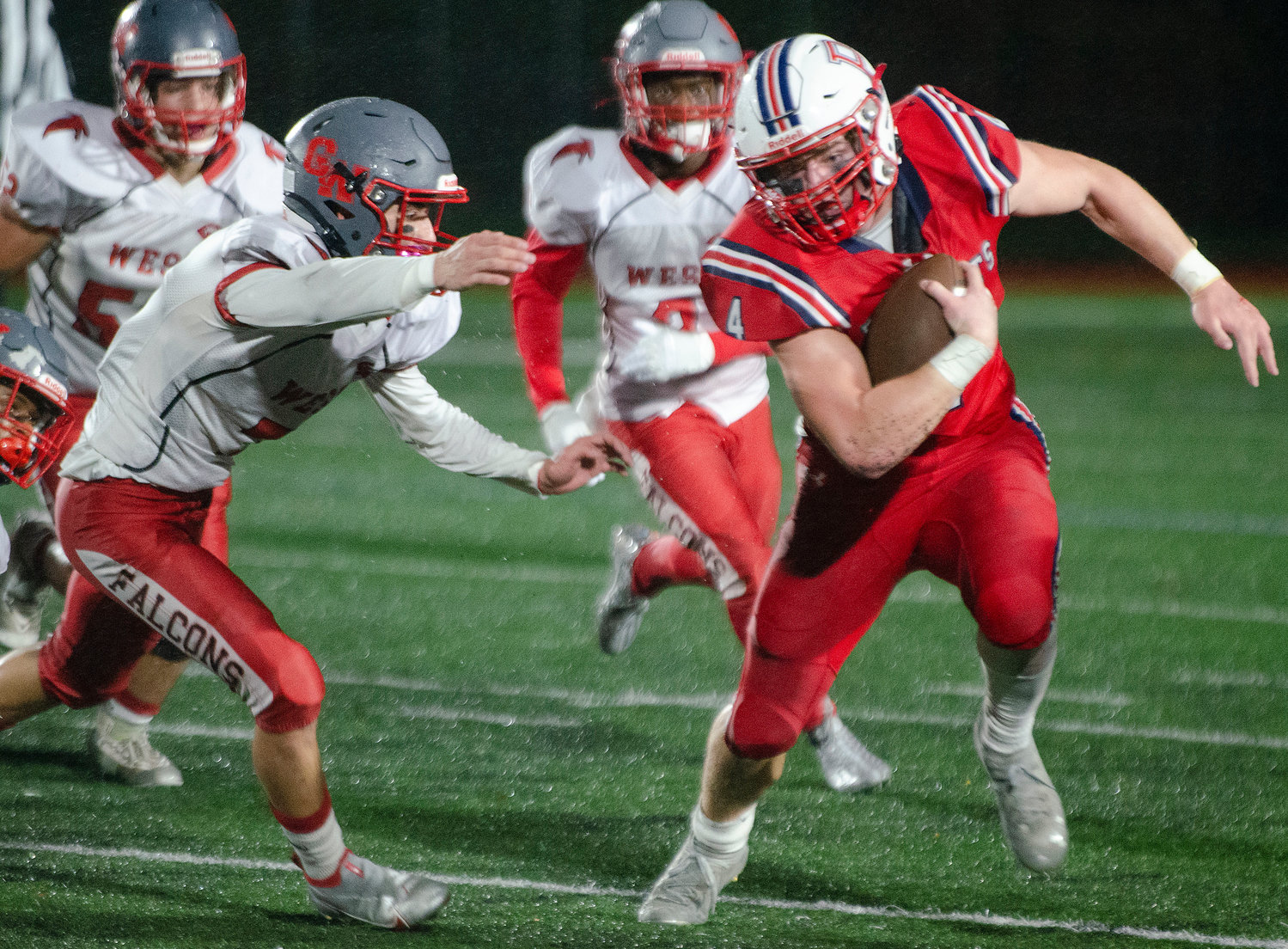 Neal Tullson runs around the end on a sweep.
RICHARD W. DIONNE, JR. 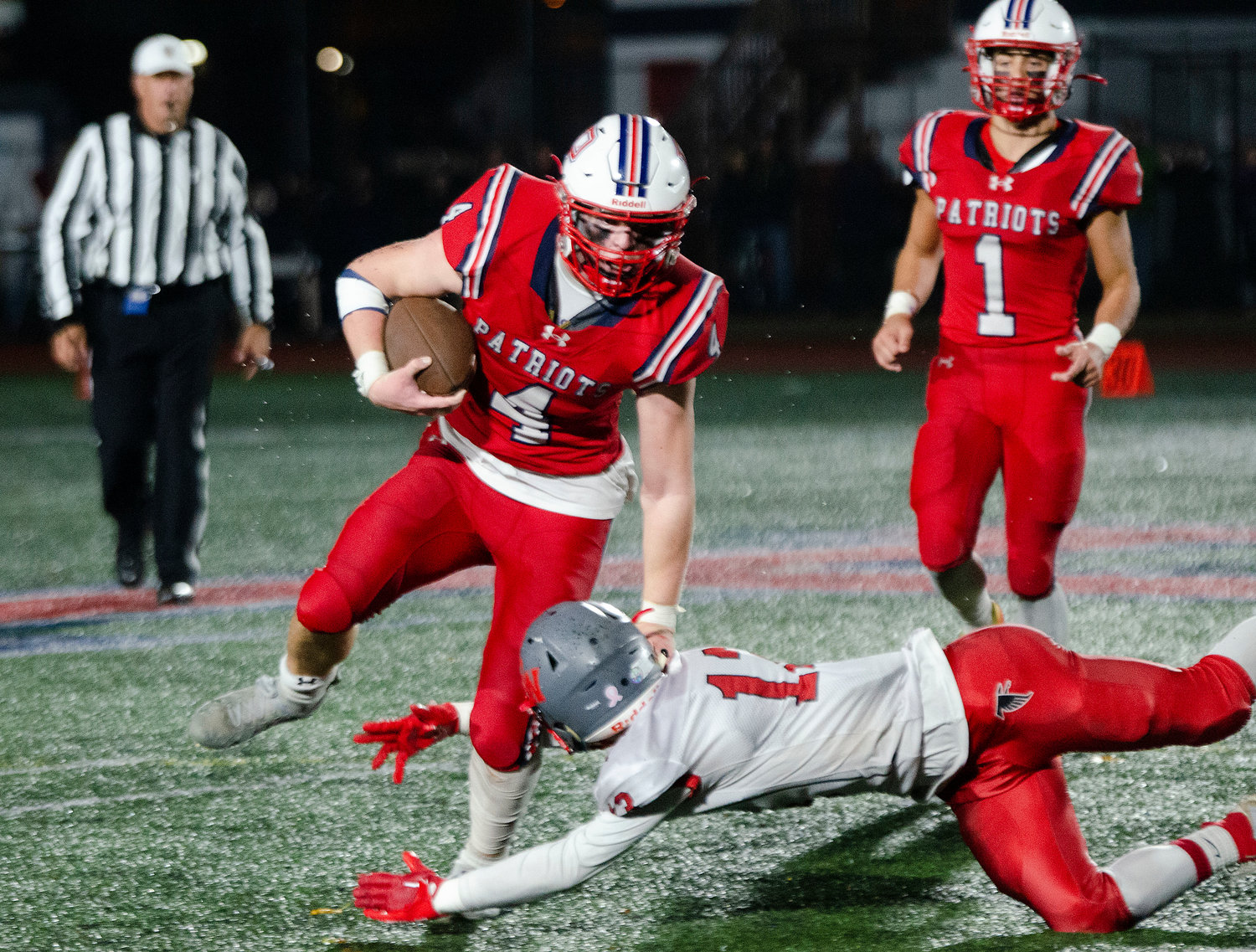 Neal Tullson running an option play, nearly gets tackled, then takes it around the end for a big play leading to the third score.
RICHARD W. DIONNE, JR. 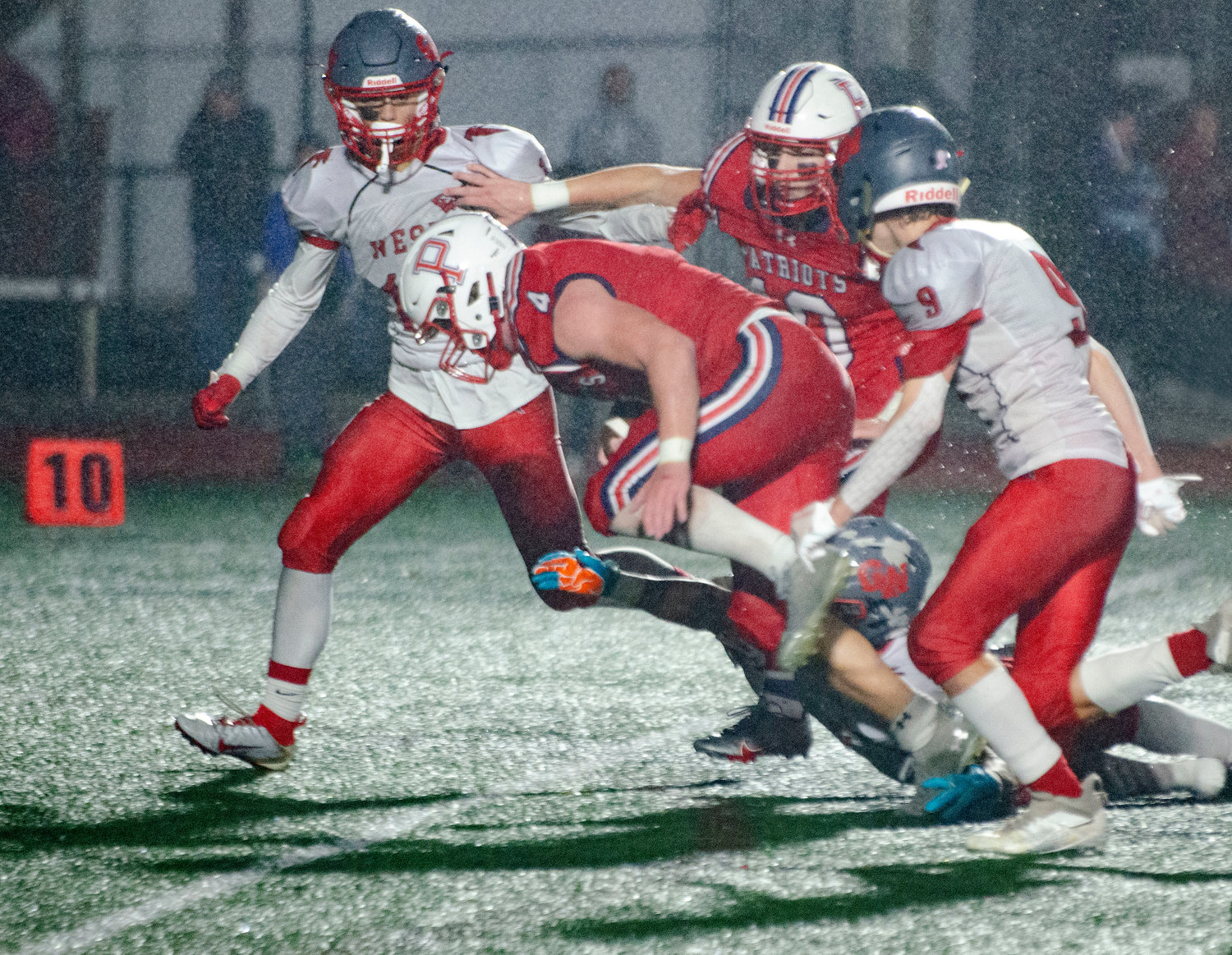 Neal Tullson runs for a big gain up the middle leading to the team's first touchdown in the first half.
RICHARD W. DIONNE, JR. 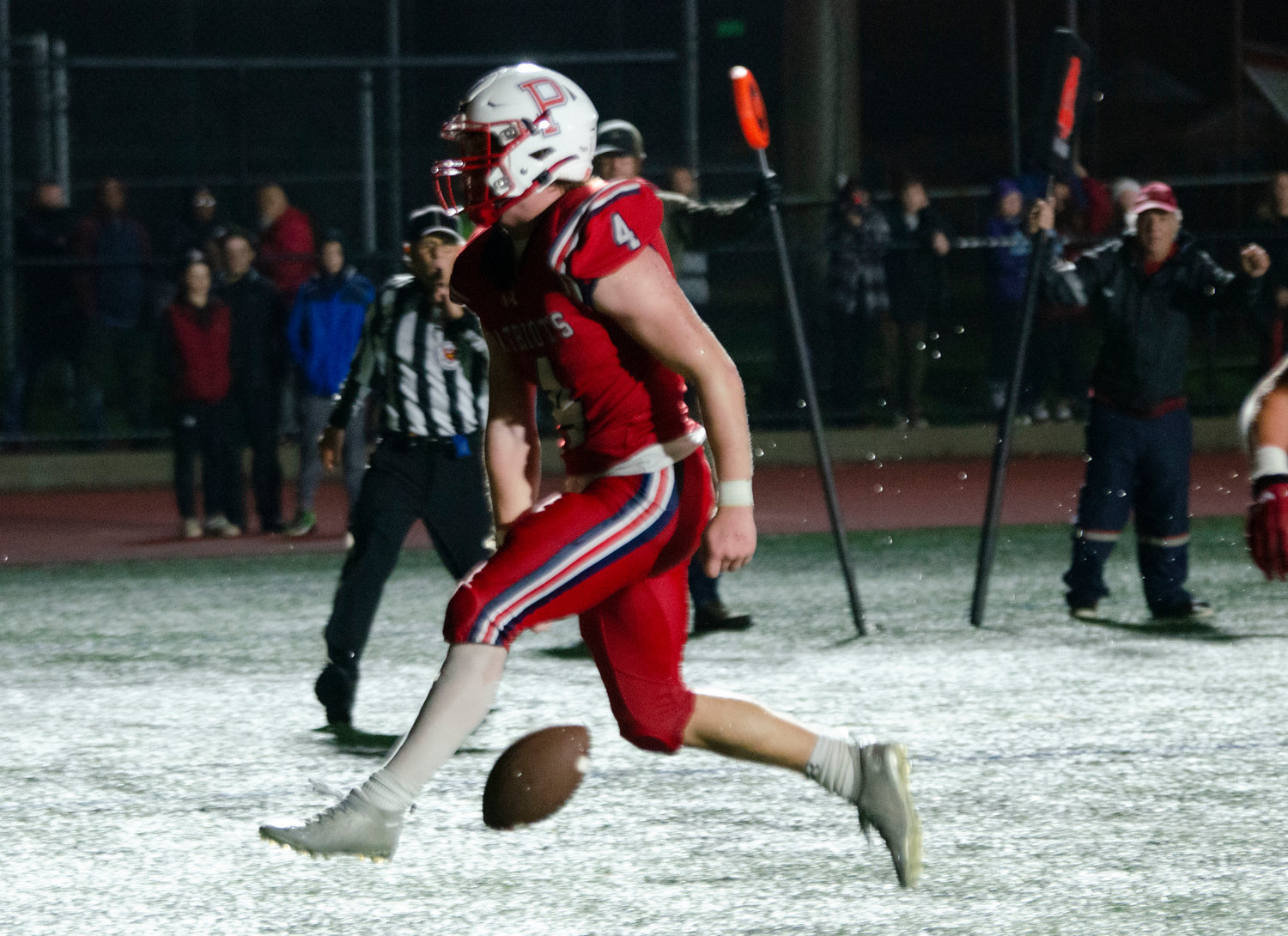 Carson Conheeney makes a tackle on running back Marcus Chung in the second half.
RICHARD W. DIONNE, JR. 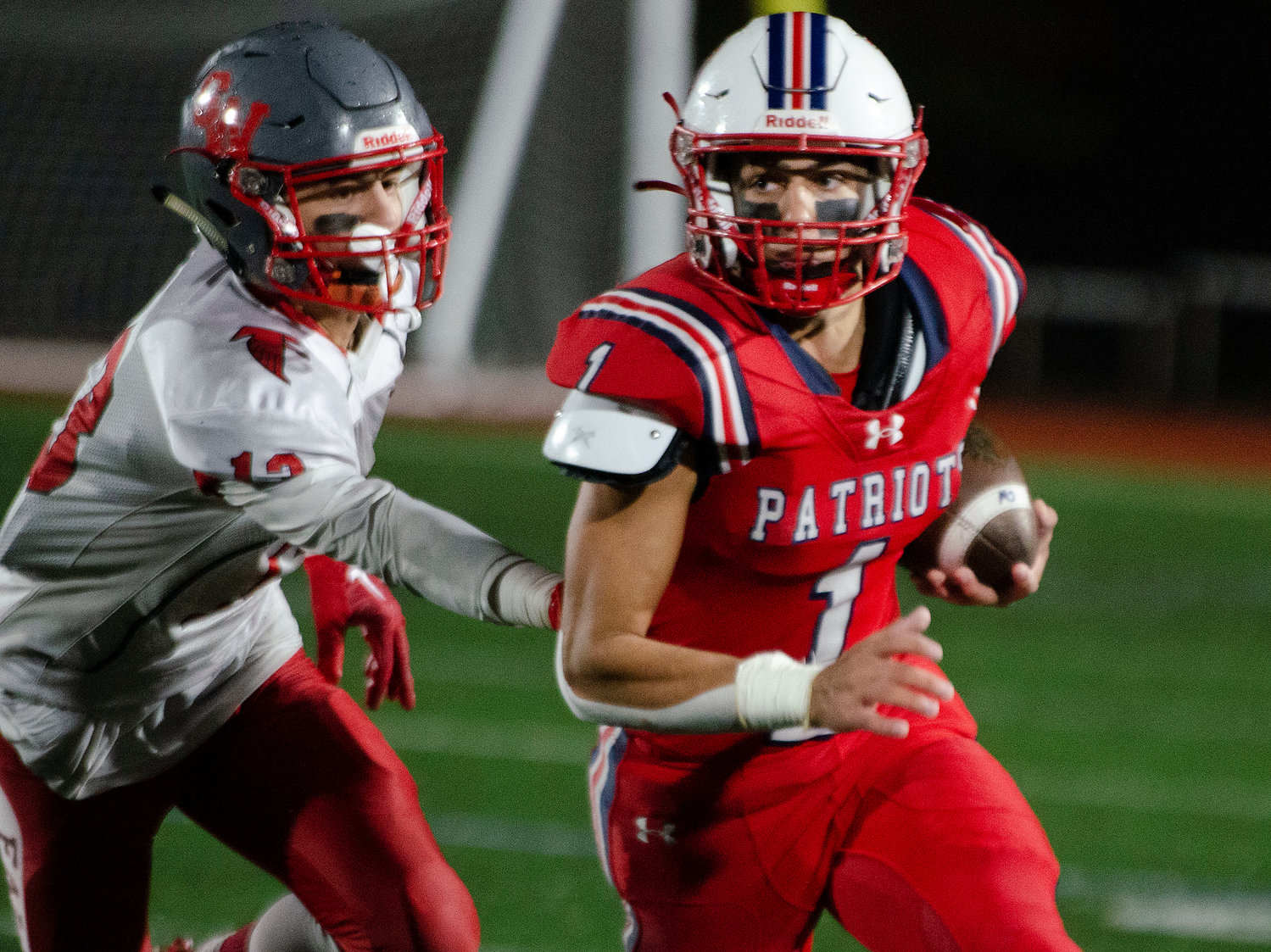 Patriots’ running back Carson Conheeny runs on a sweep in the second half.
RICHARD W. DIONNE, JR. Adam Conheeney nearly got into the end zone, but stepped out of bounds on his way there. Neal Tullson scored on the next play.
RICHARD W. DIONNE, JR.
Previous Next
Posted Saturday, November 12, 2022 12:56 pm

On a rainy and windswept turf field at home Friday night, the Patriots elected to stick with their potent ground game which, combined with a stout defense led by Dylan Brandariz, was all they needed to get the job done.

Brandariz made several key defensive plays for his team, and often turned the game into a nightmare for the Falcons’ quarterback, Kelan Cornell.

Patriots quarterback Neal Tullson never threw a pass, but he didn’t need to as he scored all three touchdowns for Portsmouth using his legs.

Cranston West started with a short field due to the Patriots kicking off into the wind. The Falcons moved the ball well on the ground, converting several third-down conversions before a fumbled snap was recovered by Brandariz, setting up the Patriots on their own 26.

Portsmouth could not capitalize, however, and had to punt. Cranston West soon had to do the same, following a tackle by Brandariz for a loss, making it fourth and nine on the Patriots’ 38.

In the second quarter, Tullson ran 16 yards for a first down, then another nine into the end zone. The point-after by George Smith made it 7-0 Patriots with just under three minutes left in the quarter.

Just before the end of the first half, the Patriots thought they had stopped the Falcons on fourth-and-one, but a measurement awarded the first down to Cranston West. An offsides penalty on PHS furthered the ball to the five-yard-line with just 30 seconds left, and a rushing TD tied the game at 7 at halftime.

Early in the third quarter, the Patriots faked a punt on fourth down and handed the ball to Huntley Almeida. He initially got stuffed at the line, but then ran to the left for 20 yards to the 19-yard line and a first down. A few plays later, however, Cranston West took over on downs at their own 12.

The Falcons couldn’t capitalize, however, and their punt into the wind traveled only three yards after the ball was tipped by Brandariz. The Patriots took over at the Falcons’ 15-yard line, and a few plays later Tullson ran it in from the 6 on fourth-and-one. Smith’s point-after was good, making it 14-7 Portsmouth with 3:24 left in the third quarter.

Portsmouth’s defense kept making plays, and the offensive kept running it down the Falcons’ throats. Running back Shane Harvey stepped up big in the second half, moving the chains for Portsmouth and setting up a third TD run for Tullson, making it 20-7 with just over six minutes left. (Portsmouth was stopped on the point-after following a botched snap.)