This statement was released Saturday, following Friday's release of a 'hate-filled' political mailer sent to residents by the Little Compton Taxpayers' Association. Love Wins held a rally at the … 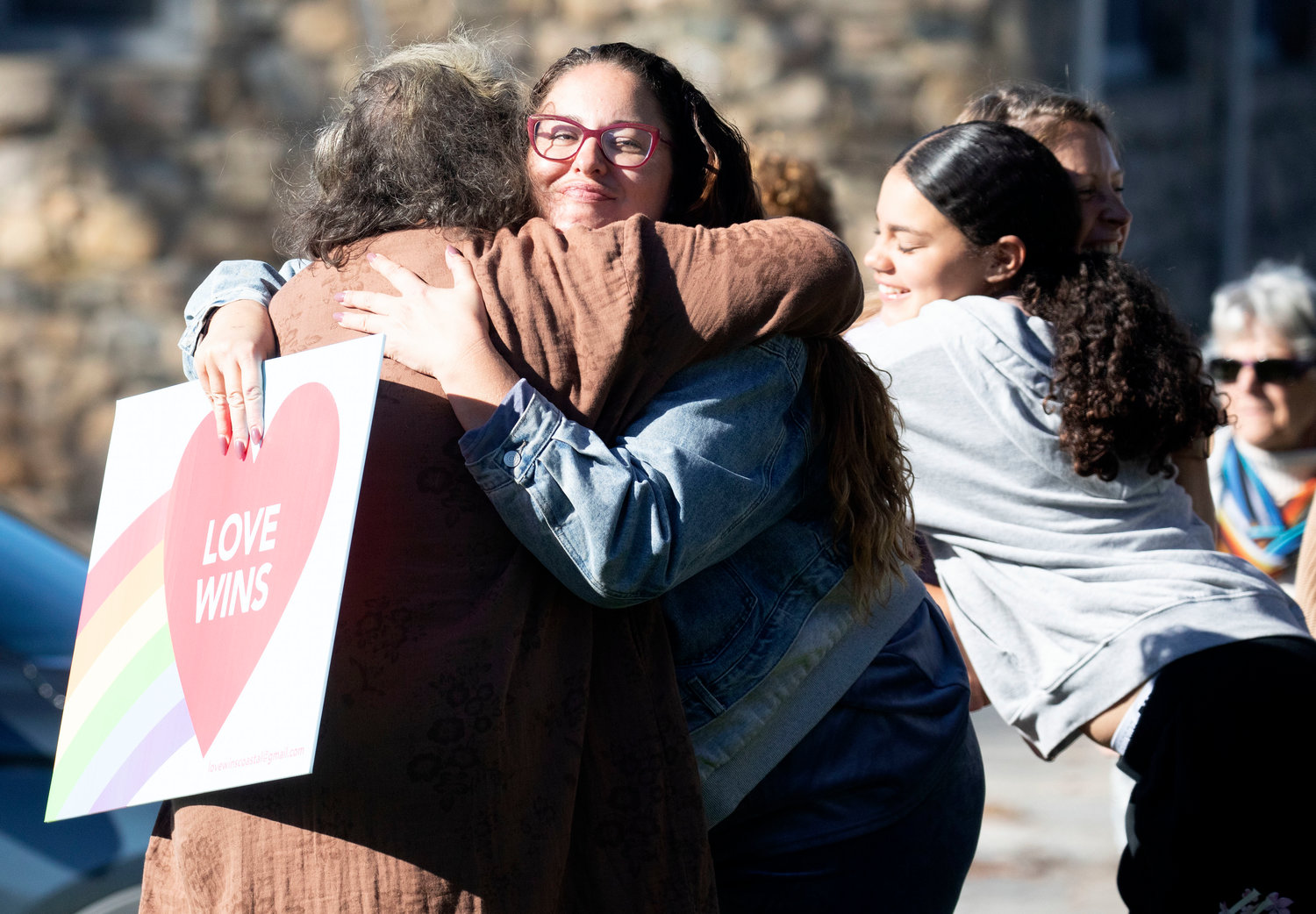 Megan Wordell (middle) and others hug during a rally held in Little Compton Sunday afternoon. The rally was organized by Love Wins as a counterpoint to an incendiary mailer sent out late last week to Little Compton residents, which criticized progressive politics and Democrats, and called out council and school committee members for their stances on sex education, the flying of the Pride flag, and other issues.
RICHARD W. DIONNE JR.
Posted Tuesday, November 1, 2022 2:46 pm

This statement was released Saturday, following Friday's release of a 'hate-filled' political mailer sent to residents by the Little Compton Taxpayers' Association. Love Wins held a rally at the Commons Sunday afternoon to protest the mailer's content and message.

Love Wins Coastal has sought to support our community’s needs related to LGBTQ+ issues since its founding. We believe that the best way to do this is through relentless positivity in our programs and outreach, including compassionate responses to those who disagree with us. That belief does not mean that we will not draw attention to actions that harm LGBTQ+ community and its allies.

One such action is the recent newsletter sent to every postal resident in Little Compton at great expense by the Little Compton Taxpayers Association. While they do not use our name, it is clearly referring to Love Wins Coastal and our programs. They accuse us of  “poisoning the town” by “sexually educating grammar school children” and “targeting” Town Councilors for their votes regarding the Pride Flag.

The sexual education accusation is grounded in the myth that LGBTQ+ people maliciously target youth, at best "recruiting" them and at worst "grooming" them for sexual exploitation. Anita Bryant and Bob Greene popularized this belief in 1977 through their “Save the Children” organization, and it has been a constant in homophobic rhetoric since.

This myth is rising in popularity again, with increasing numbers of LGBTQ+ community members being accused of targeting children as violent attacks rise and their civil rights are stripped away. The facts simply do not support the allegation. There's no evidence that children are more likely to be victimized by LGBTQ+ folks. The Southern Poverty Law Center has written extensively to debunk this myth and others about the LGBTQ+ community. They rely upon evidence from the American Psychological Association & the Child Molestation Research & Prevention Institute. (Read more: https://www.splcenter.org/.../10-anti-gay-myths-debunked.)

We developed the Rainbow Nights program specifically because research shows that children often begin to notice that something's different about them around grade 5. Meanwhile, 45% of LGBTQ+ youth report considering suicide, but one accepting adult cuts the risk of suicide among LGBTQ+ youth by 40%. Based on this research, we aim to provide a group of peers and trusted adults to have big conversations with, as well as let them be normal middle schoolers who just so happen to be LGBTQ+ or allies. Developmentally, middle schoolers are also "trying on" different identities, so we want to give them the space to explore different identities and pronouns to see what feels right to them. Kids grades 5-8 drop-in to do a craft, play bingo, watch a movie/show, or hear about healthy relationships. We have never provided any information or materials related to sexual activity to this group.

As we speak out against the harm done by this group and its newsletter, we also spoke out against the votes of Town Councilors on the Pride flag. Specifically, we focused on the 3-2 decision to reverse a prior approval to fly the flag by denying it happened. Accountability for one’s actions is to be expected, particularly as a public official, and does not constitute “targeting”. We commend one of those Councilors, Mr. Mataronas, who has attended both of our Pride events and explained to the community his rationale behind his vote with a letter to the editor.

Words like those from the LCTA are intended to make us feel hurt, disappointed, and afraid. They are intended to stop us from being visible, and to stop us from advocating for a world that also takes LGBTQ+ needs into account. Help us to show that we won’t allow that to be taken from us by assembling with us at Pike’s Peak tomorrow afternoon, October 30, at 2pm.

If you need help now, LGBTQ+ youth are encouraged to reach out to the Trevor Project at  https://www.thetrevorproject.org/get-help/. LGBTQ+ adults can contact the LGBT National Help Center at http://www.glnh.org/.