A group that represents residents at Countryview Estates, a manufactured home community in northeast Tiverton, has asked the town for help in resolving numerous grievances it has with Hometown … 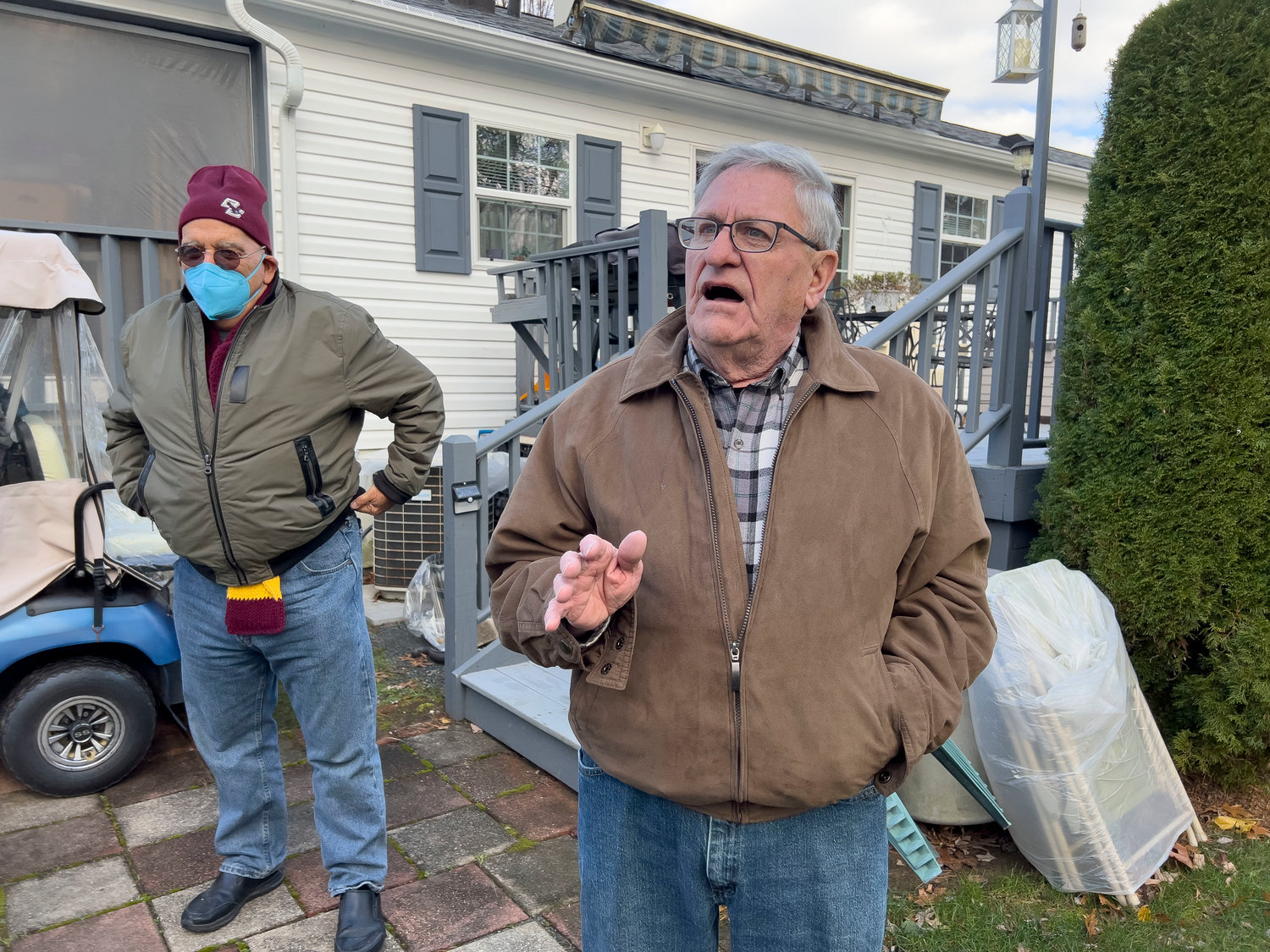 Al Alfonso (left) looks on as Don Knight speaks about a tree that needs removing before it lands on his house.
RICHARD W. DIONNE JR.
Posted Wednesday, December 7, 2022 1:13 pm
By Ruth Rasmussen

A group that represents residents at Countryview Estates, a manufactured home community in northeast Tiverton, has asked the town for help in resolving numerous grievances it has with Hometown America, a Chicago-based property management company that has owned and operated the development since 2015.

The scenario mirrors a trend seen throughout the country in recent years, with mobile home parks and manufactured home developments being acquired by out-of-state companies that view them as lucrative investments, while residents reluctantly adjust to new management practices seemingly focused solely on the bottom line.

In some cases, residents who believe local or state laws are being violated are fighting back by asking government officials to intervene — as residents at Countryview Estates are doing — or by seeking legal remedies through the courts.

Countryview Estates, located on Hurst Lane, is a gated community of 239 manufactured homes occupied by about 450 residents aged 55 and over. Residents own the homes and lease their land from Hometown America for around $500 to $600 per month. All residents pay property taxes on their homes and are responsible for normal household operating expenses. Each has an individual contract with Hometown America which stipulates that rental increases for the land will range from three to eight percent annually.

Use of a clubhouse, an indoor heated swimming pool, fitness center, and picnic and barbecue area are included in common area amenities that Hometown America is responsible for maintaining and upgrading as needed.

A stroll through the quiet community gives visitors a sense of a safe and secure neighborhood, where pride of ownership by the residents is evidenced by homes that are well taken care of and in good repair.

Hometown America, a privately held company founded in 1997, operates 66 manufactured and mobile home communities in 12 states. It purchased Countryview Estates in 2015 at a price of $11.2 million. The former owners, all local residents, had developed the community and operated it since the late 1990s.

But based on comments from homeowners’ representatives, however, the company is falling short in some aspects of its mission.

“We think they are drawing too much profit and not putting enough back into the community,” said Michael Carreira, a resident for 17 years who serves as treasurer of Country View Citizens Association (CVCA), the group representing the homeowners.

Carreira and other board members took a walk through parts of the development Monday, pointing out problems they believe should be addressed but have not yet been — rotting soffits, a sagging roof and water damage in the communal pool area, and trees some believe are in danger of hitting at least one home. They believe continuous turnover of maintenance personnel is an issue, and expressed frustration over the company’s slow response and apparent disinterest in addressing concerns.

“Any time we go to management, they seem to ignore us,” said board member Don Wright, who has lived in the community for eight years.

Board president Al Affonso, a resident for the past 12 years, said he has waited as long as six weeks for responses to his letters.

The CVCA board, in correspondence to the Tiverton Town Council, cited several instances of what it considered neglect and improper maintenance that have negatively impacted common areas and structures within the development.

In some cases, board members wrote, the company’s inaction has posed a safety hazard to residents. Snow removal, for example, has been “slow and inadequate, resulting in personal injury and leaving our seniors…vulnerable should they be required to leave the property or be dependent on outside help.”

“More funds need to be committed to properly maintain this property,” said the board, after noting that the company’s controllable operating expenses decreased by about 33 percent from 2019 to 2021.

In meeting with the town council last month in connection with the annual renewal of Hometown America’s license, Carreira referenced the general laws of the state of Rhode Island, the Tiverton Home Rule Charter, and the Tiverton Zoning Code.

“These codes are very specific as to what the duties are of the licensee,” he said.

He added that Countryview residents collectively contribute over half a million dollars in real estate taxes to Tiverton each year, require virtually no services from the police department or public works, and pose no burden to the school district.

When asked to comment on the issues raised by the CVCA board, Kyle Howieson, Regional Vice President, emailed the following statement:

“We take great pride in providing an affordable, higher standard of living in our communities. The care and maintenance of Countryview Estates, and our residents’ satisfaction, is our highest priority. We have a team of dedicated professionals who work to ensure Countryview’s amenities and infrastructure are properly maintained and are always willing to engage with our residents on any concerns or issues they flag.”

At its Nov. 28 meeting, town councilors said there was no justification for delaying approval of Hometown America’s annual license, since a recent inspection of the development by the town’s building official and interim town planner showed no evidence of violations of building or zoning regulation or safety issues. A motion to approve the license renewal, subject to the company’s meeting all legal requirements, was approved unanimously.

Prior to the vote, Carreira urged the building official and others to conduct a more extensive inspection of the property and to include members of the CVCA board, so they could point out specific areas of concern.

In response, town officials said they would invite Hometown America to send a representative to a meeting that would include CVCA board members, the town council president, town administrator, and the building/zoning official to discuss residents’ concerns in more detail.