Patriots had their chances in heartbreaking 1-0 loss to Burrillville

PORTSMOUTH — For most of the first half of Saturday’s R.I. Division II girls’ soccer championship, Portsmouth High looked like the better team.

The No. 2-seeded Patriots …

Patriots had their chances in heartbreaking 1-0 loss to Burrillville 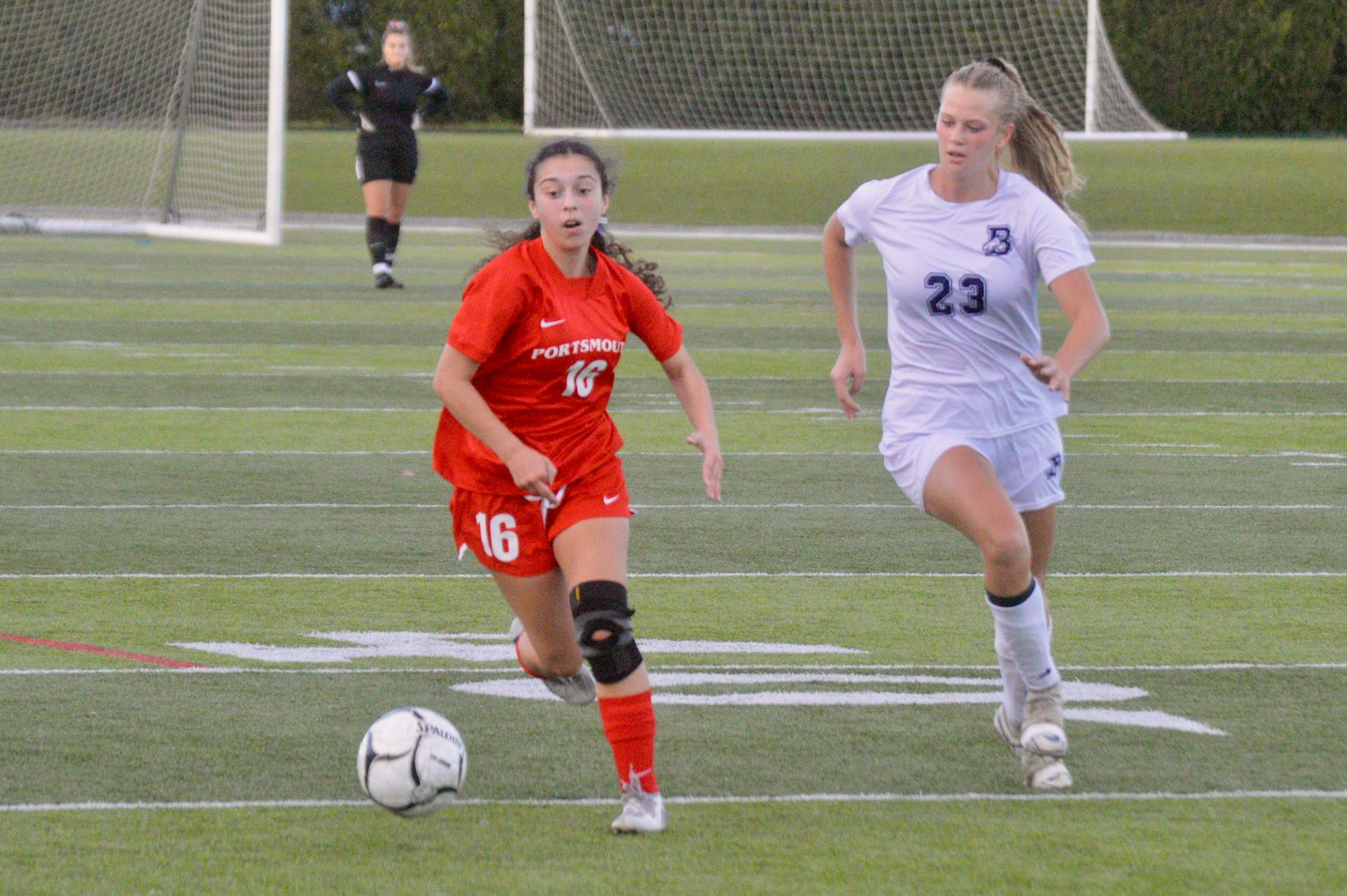 Portsmouth High senior Olivia Costa controls the ball while being pursued by a Burrillville defender during the R.I. Division II state championship game on Saturday at Cranston Stadium.
JIM MCGAW 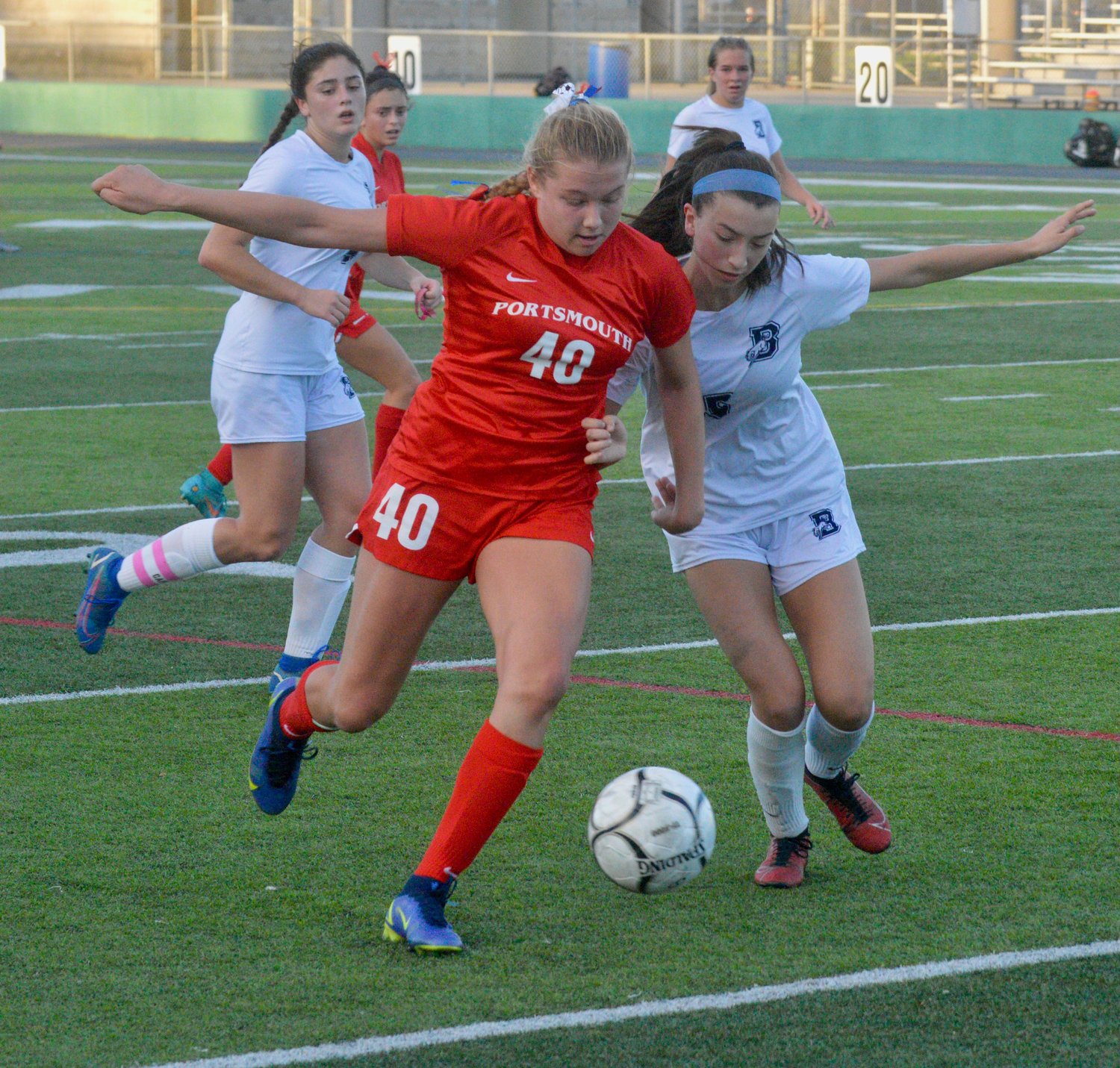 Sophomore Mollyana McGuire fights for possession of the ball in the second half.
JIM MCGAW 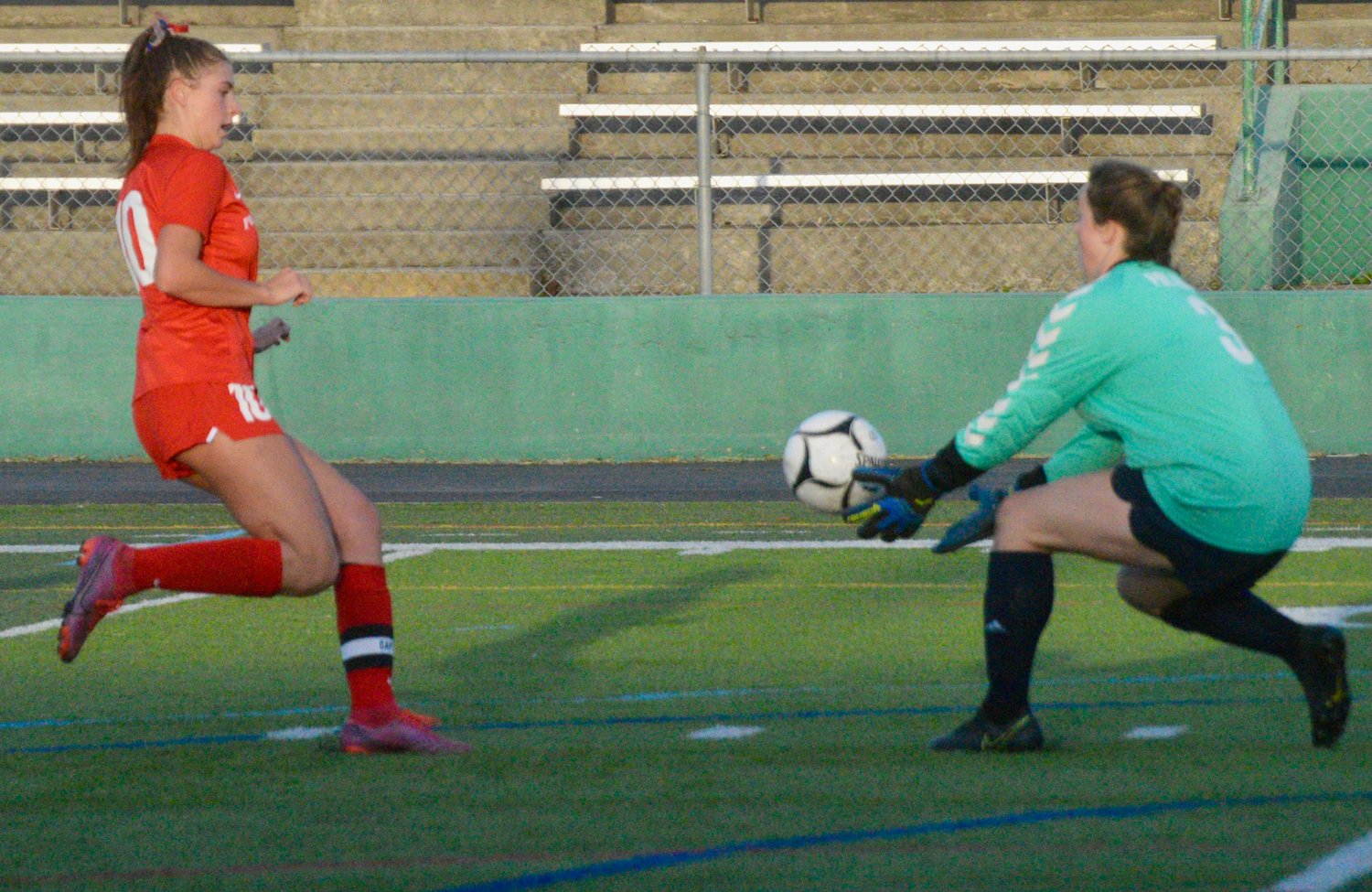 Senior Kaitlin Roche closes in quickly as the Burrillville goaltender comes out of net to make a save.
JIM MCGAW 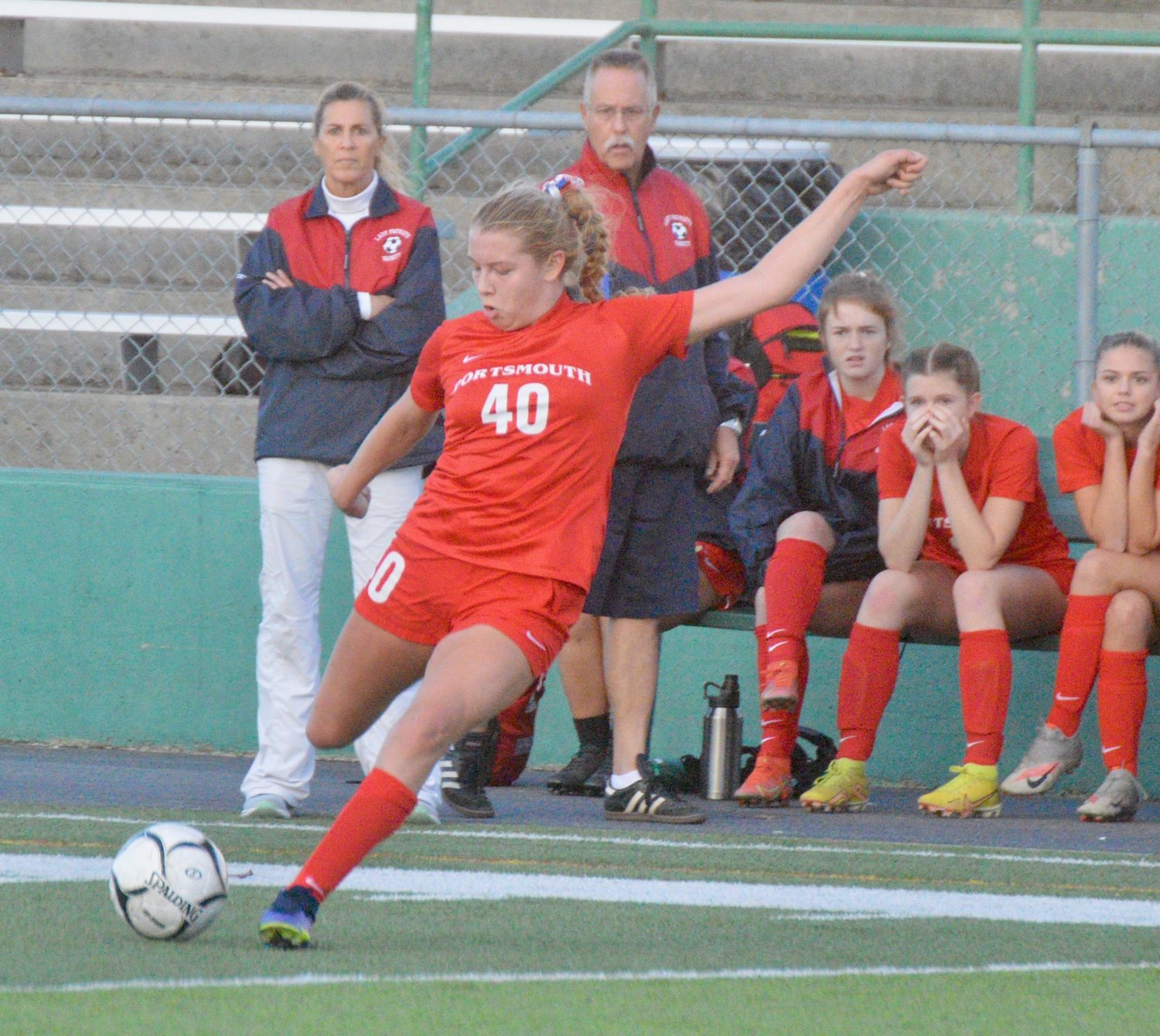 Mollyana McGuire boots the ball toward the net.
JIM MCGAW 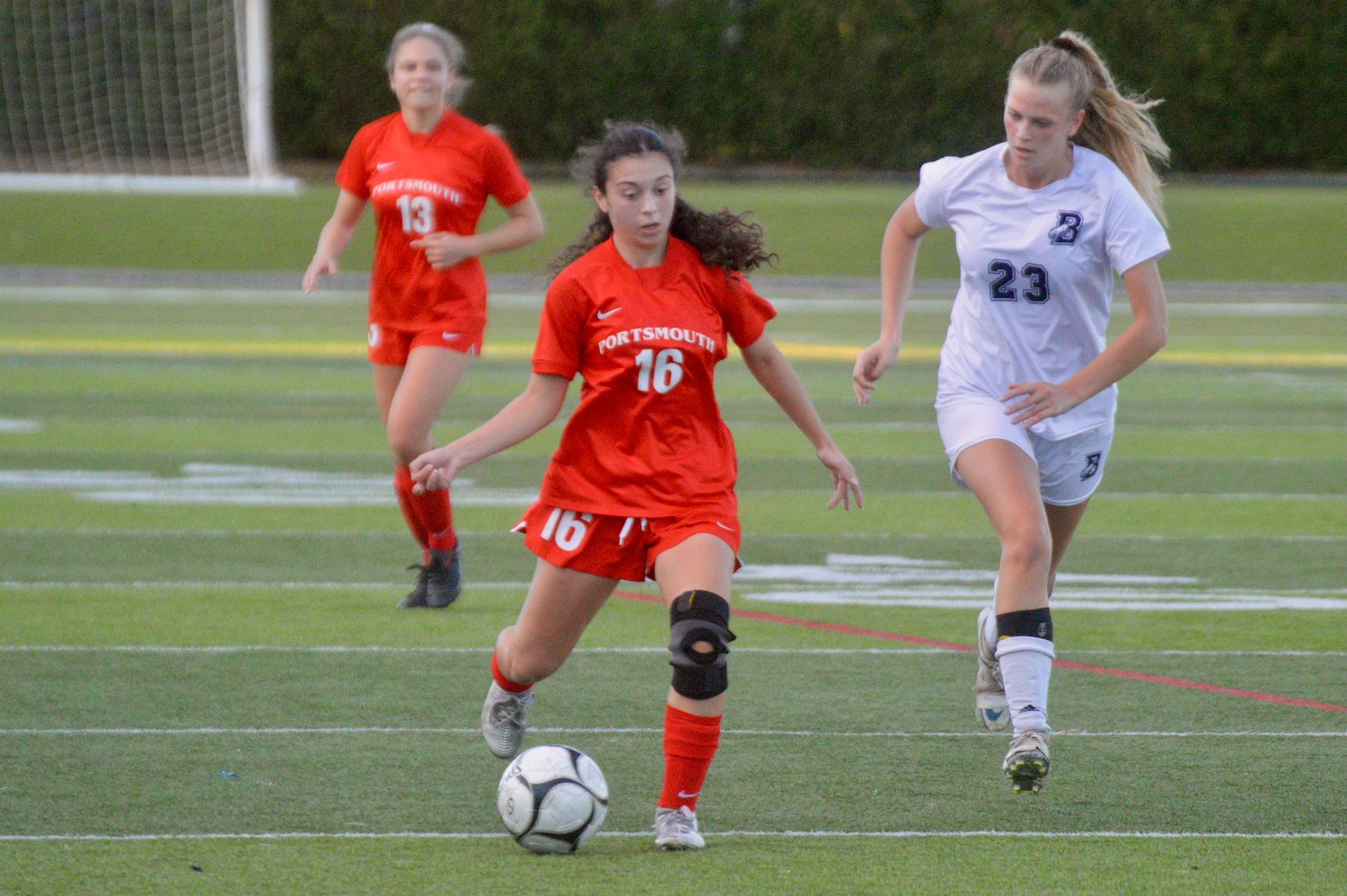 Members of the PHS girls’ soccer team pose for a photo after being runners-up in R.I. Division II.
JIM MCGAW 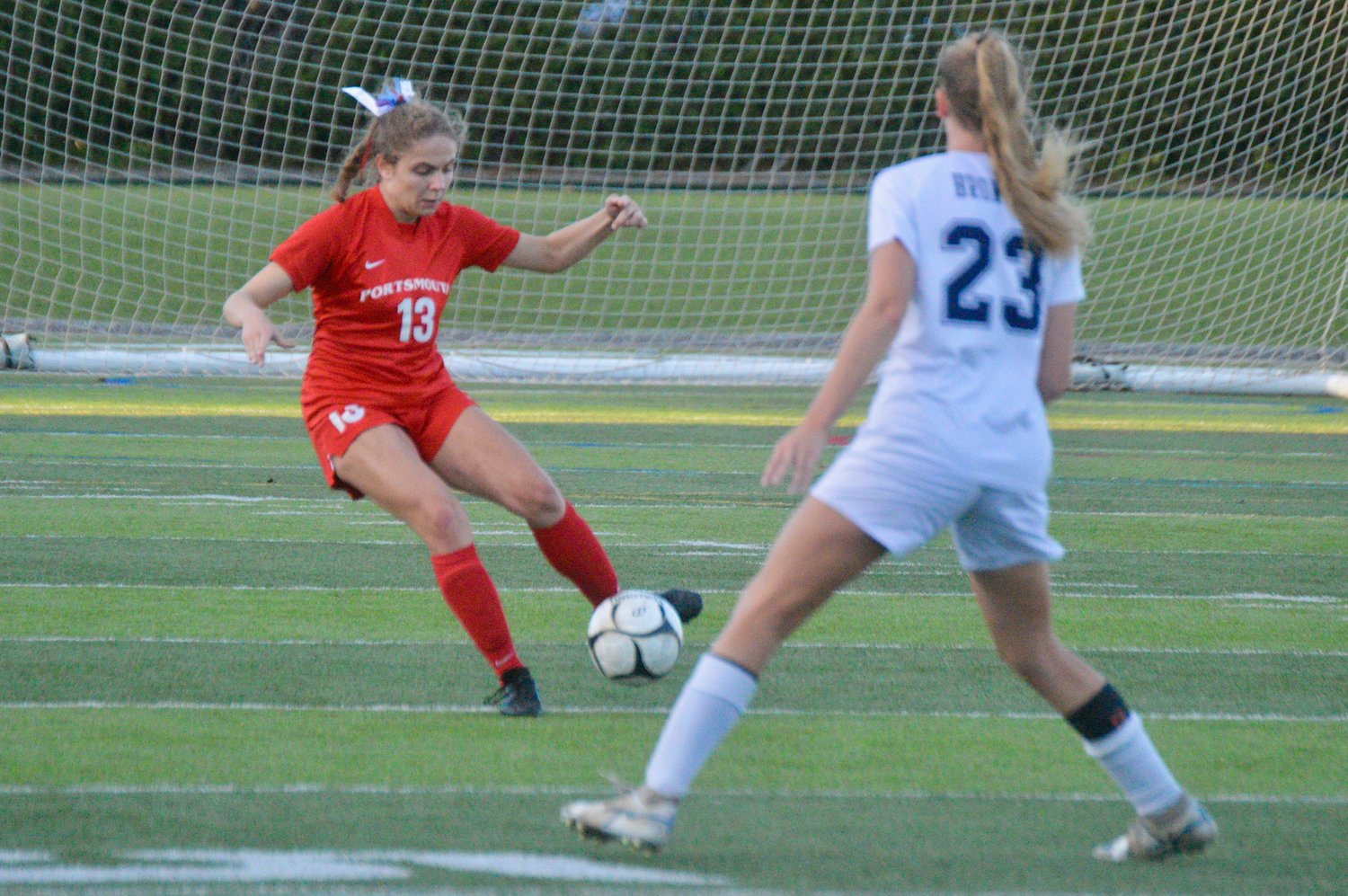 Sophie Mulligan tries to get the ball by a Broncos defender.
JIM MCGAW 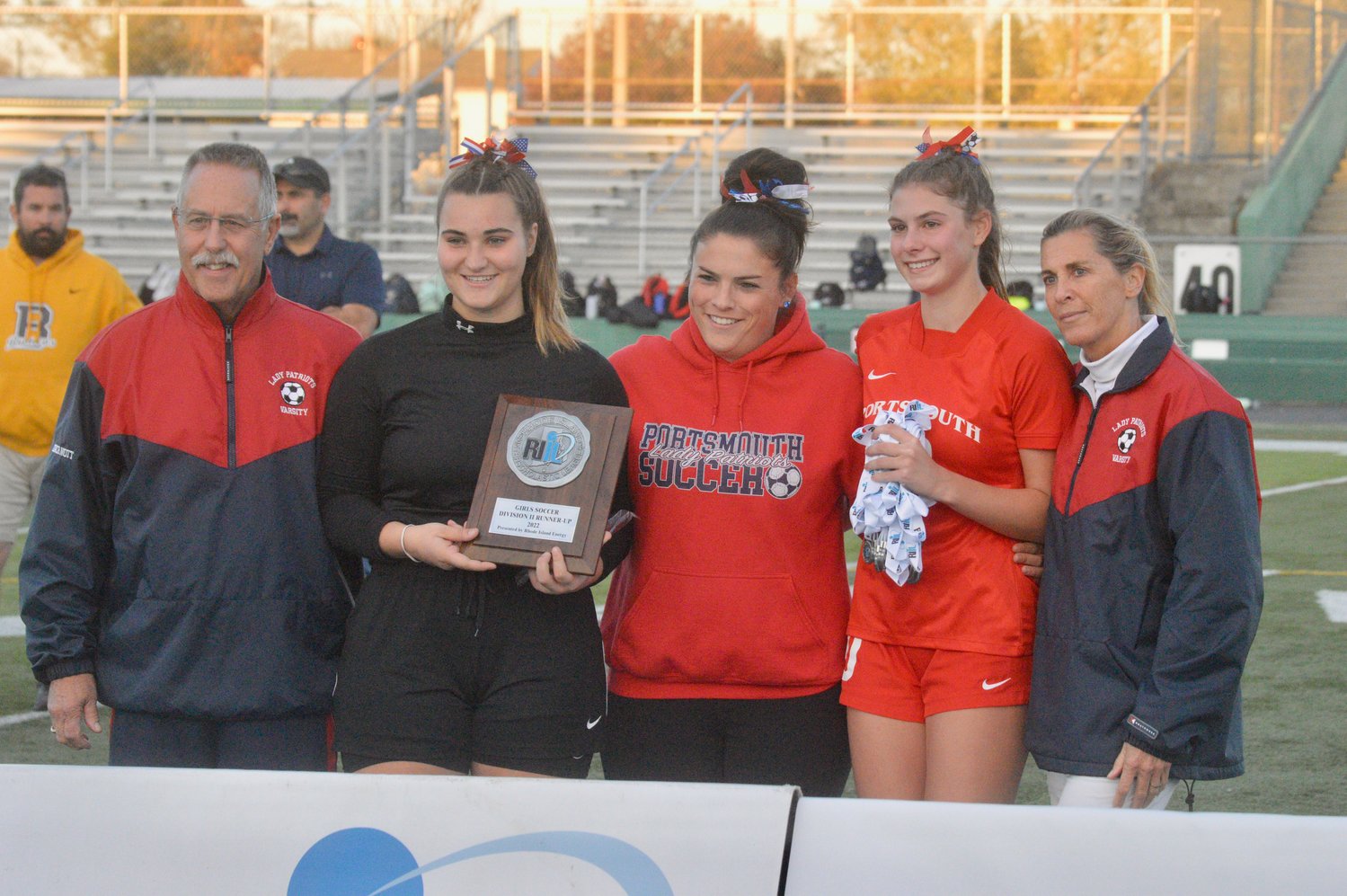 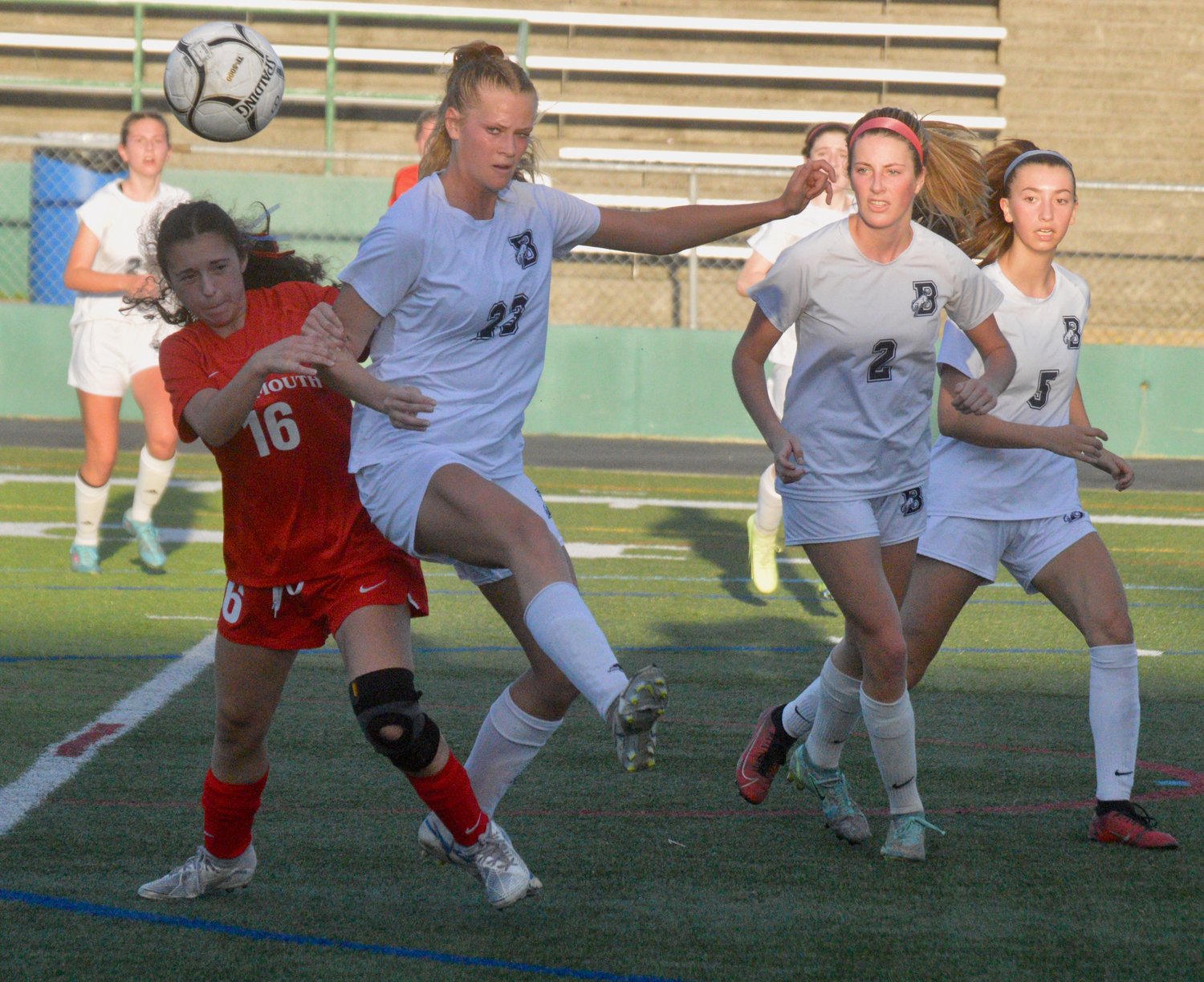 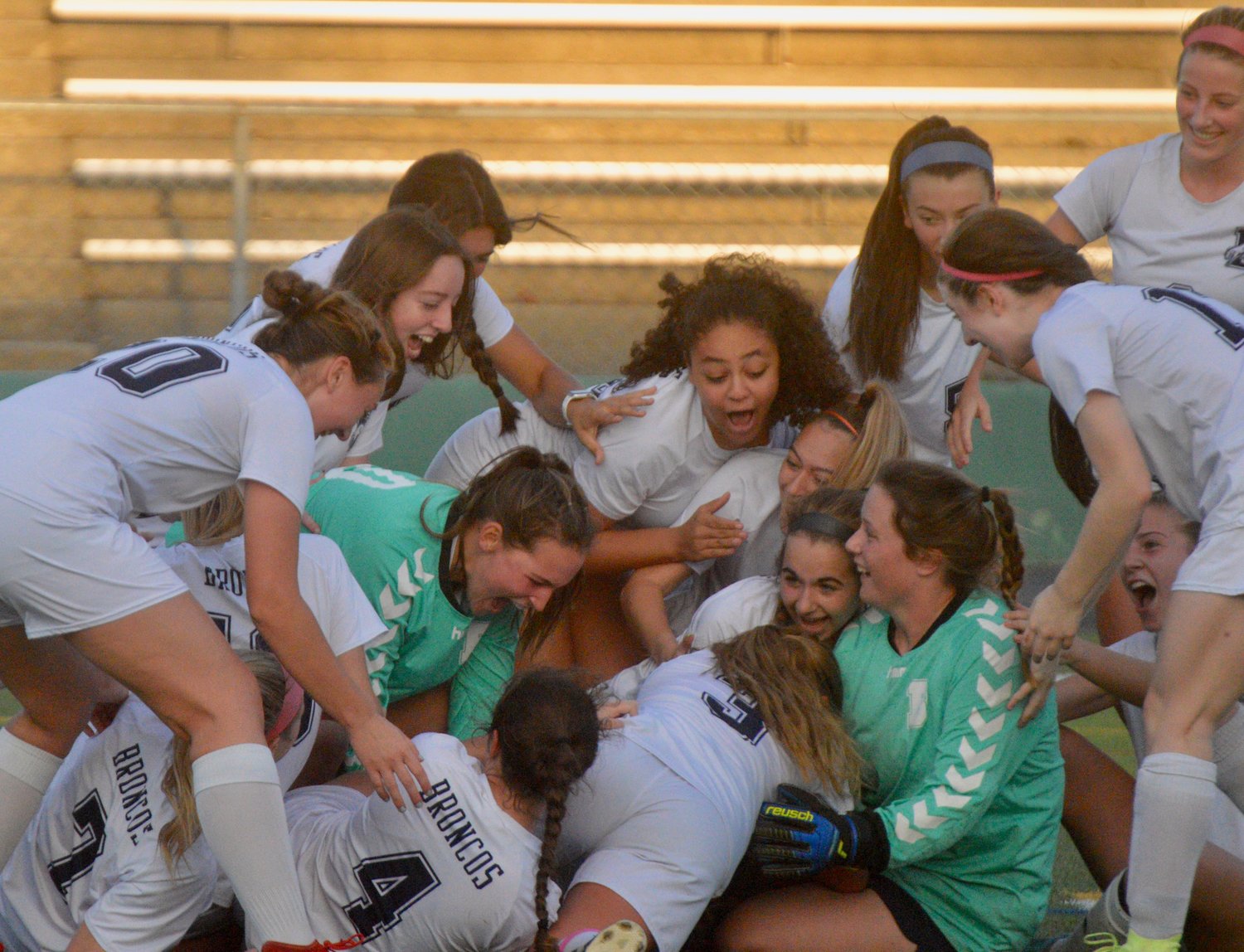 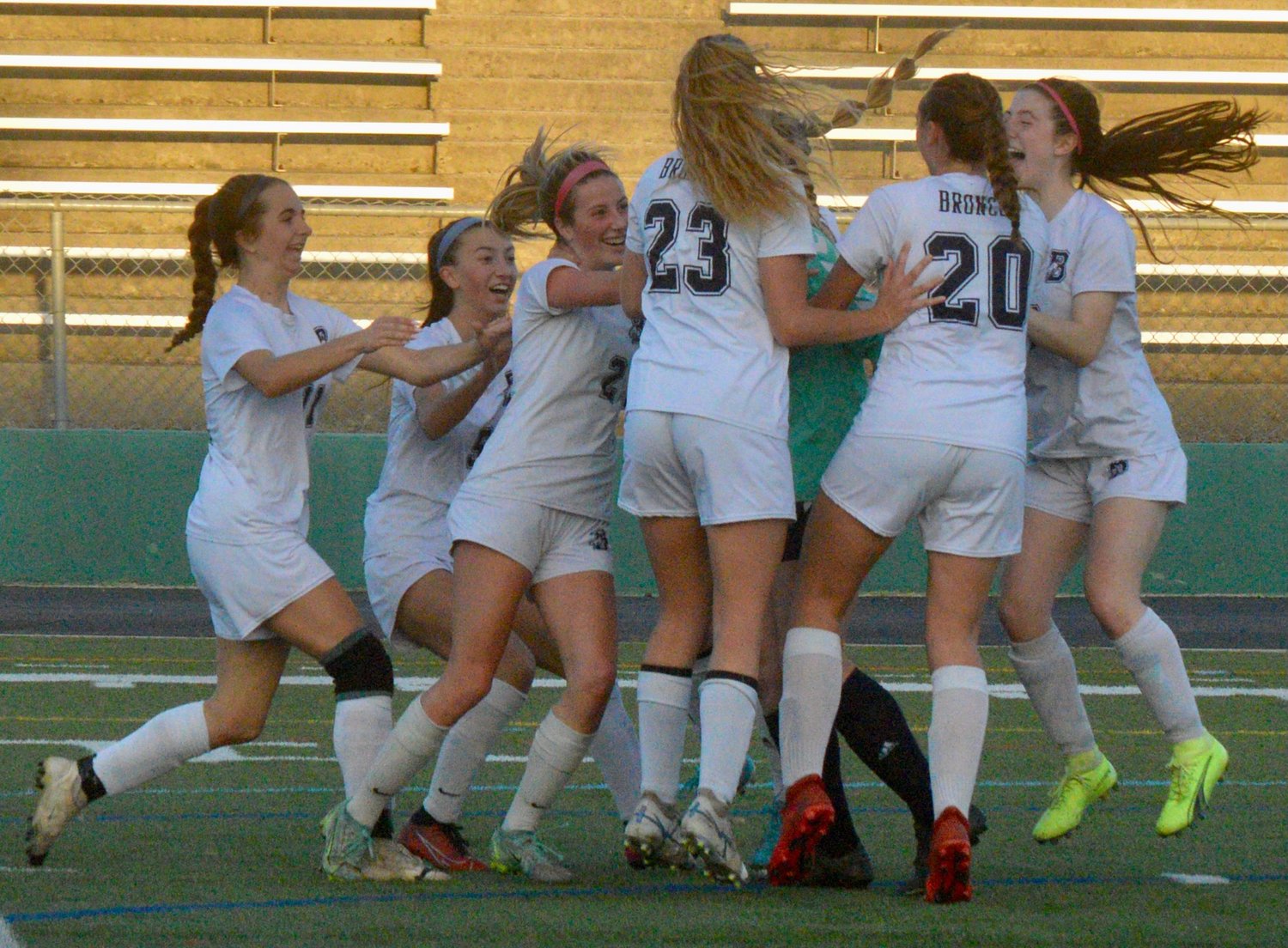 PORTSMOUTH — For most of the first half of Saturday’s R.I. Division II girls’ soccer championship, Portsmouth High looked like the better team.

The No. 2-seeded Patriots were dominating on offense at Cranston Stadium, and their defense kept the ball away from goalkeeper Emily Maiato’s end of the field for most of the first 40 minutes.

Portsmouth’s booters also got some decent shots on goal. The first two came from the Patriots’ senior top scorer Kaitlin Roche, who missed wide right four minutes into the game, and then again two minutes later.

About 22 minutes into the contest, a free kick by Portsmouth floated over the Burrillville goalkeeper’s head — only to hit the top of the crossbar and bounce away.

For Portsmouth, the ball just didn’t want to meet the back of the net.

Then with less than nine minutes left in the half, Maiato leaped to tip a Broncos’ goal attempt over the crossbar. It was a great save, but in the ensuing corner kick the ball got batted around and crept over the plane of the goal line. It was suddenly 1-0 Burriville.

Despite more chances by Portsmouth in the second half, including two more near goals by Roche and another by Poppy Jelley, that’s how the score remained at the end.

After the tough loss, head coach Lauren Bulk said her girls can hold their heads high. This was a transitional season for the Patriots, who were bumped down from last year’s Division I perch by the R.I. Interscholastic League. Despite that distraction, they played strongly all year, she said.

“To get bumped down to D-2 and then go the whole season technically undefeated — we didn’t lose; we tied a couple of games — to make it here is just a big thing,” Bulk said. “A move down to D-2 is a kick in the gut, but these girls do know that it’s OK sometimes to come down, collect yourselves, and work your way back up.”

Teamwork was key in getting through any struggles, she said.

“Portsmouth always has good skills, but to take a bunch of individually good players and put them together, it’s the teamwork aspect that you really need to do it,” she said. “They did great this year. It’s a great group of girls, all of them, whether they played on the field or whether they sat on the bench. Even the bench cheered them on. To make it this far in D-2 their first year, after getting kicked in the shins, I’m very proud of them for that. They had a good attitude about it.”

Roche, who had a brilliant season, took the loss hard.

Kaitlin and five other seniors will be leaving the team, but Bulk said she has high hopes for next season.

“I have a good amount of skill with my underclassmen, but losing a lot of key players — Emily in net, Kaitlin being our leading goal-scorer. I have a lot of confidence in the rest of the team that they can fill those big shoes,” she said.