CRANSTON — It was a long time in the making, but the East Providence High School football team and second-year head coach Jon Stringfellow finally earned their first win in nearly two seasons … 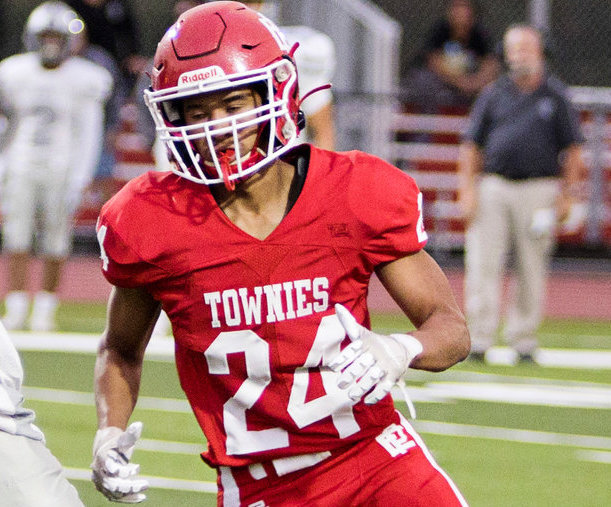 Marcus Garedo and the EPHS football team earned their first win of the season with a victory over Cranston East last weekend.
Photo by Julie Furtado
Posted Sunday, October 24, 2021 12:00 pm
By Jake Parent

CRANSTON — It was a long time in the making, but the East Providence High School football team and second-year head coach Jon Stringfellow finally earned their first win in nearly two seasons as the Townies defeated Cranston East, 30-22, in a Division I contest played Saturday, Oct. 22, at Cranston Stadium.

Four touchdowns from the offense gave the Townies their highest point count to date in 2021. EPHS improved to 1-4 in league play while the host Thunderbolts remained winless at 0-5.

Scoring started early, with junior quarterback Max Whiting running the ball into the endzone from the 14 yard line to conclude first drive of the game for the Townies. Running backs Yusef Abdullah, a junior, and Joel Arias, a senior, totaled 41 yards combined on the drive, including Abdullah’s 20 yard kick return. Sophomore Steven Clark Jr. took Whiting’s handoff into the endzone on the two point conversion, giving the Townies an early 8-0 lead six minutes into the first quarter.

Cranston East quarterback Da’Qwon Foster led the Thunderbolts down the field on the following drive, lasting into the second quarter. After converting a fourth and five, and a holding on East Providence’s defense on third and 10, Foster sent a pass to the endzone caught by junior Romeo Cordeiro for a touchdown. A handoff to sophomore A’driahn Foreman was enough to make the two-point conversion, tying the game at eight.

On the Townies’ next drive, Clark took off on an eight yard run following a series of plays to bring the ball to the Thunderbolt 10. Whiting ran it in for his second running touchdown a play later, this one from 12 yards out to put the Townies back in the lead. Clark took another handoff from the five yard line for his second two point conversion, making it 16-8 East Providence.

After forcing a three and out on defense, the Townies took over at the 50 yard line following a short punt by Cranston East. It only took one play on the drive before Abdullah sprinted towards the endzone on a 47 yard run for another Townie touchdown. Clark completed his third two point conversion putting the Townies up by 16 with 6 minutes and 30 seconds to go until the half.

Receiving the ball out of the half, the Thunderbolts couldn’t get any points on the opening drive despite converting a third and five and nearly converting a fourth and eight, where a pass to the end zone from Foster was broken up. East Providence started at their own 27, where they converted a fourth and inches after a two yard run from Clark. The conversion was followed by a 29-yard run from Abdullah in the backfield, bringing the ball to Thunderbolt 21.

Late in the third quarter, the Thunderbolts drove the ball up to the 50 before Foreman took off on a 50 yard running touchdown. Foreman then made the two point conversion, pulling the Thunderbolts within two touchdowns entering the fourth quarter.

While the Townies went three and out on the next drive and were forced to punt for the only time in the game, Cranston East was stopped short on fourth and five at the Townies 20 after senior Marcus Garedo stuffed Foster on a run.

Arias gave the Townies breathing room with an eight yard run, Whiting was sacked for seven yards, setting up second and fourteen. On the following play the Townies fumbled, which the ball was recovered by Cranston East’s defense at the Townie 13 yard line. Foster hit senior Carlos Cedeno in the endzone to pull the Thunderbolts within eight, though their two point conversion pass was broken up.

With 1:32 to go, Cranston East lined up for an onside kick. The ball took two large bounces over Thunderbolt helmets before finding its way to Townies senior Justin Fiore. From there, Abdullah had two carries for 10 and six yards then knelt down the ball and drained the clock.

East Providence’s first victory of the 2021 season set their path to playoffs in motion. The winner of this week’s game at home against the Cranston High School West Falcons Friday night, Oct. 29, will clinch the final spot in the Division I playoff bracket. Kickoff is 6:30 p.m.

“It was a great week of practice this week. We’re hoping to continue that in planning against Cranston West, and we hope to keep this momentum rolling into next week,” Stringfellow added.

— Parent is an EPHS sophomore who contributes to the athletic department’s Twitter feed, @EPtowniesSports.