EAST PROVIDENCE — The East Providence High School and LaSalle Academy football teams meet for the 93rd edition of their historic Thanksgiving Day game when the sides gather for a 10 a.m. … 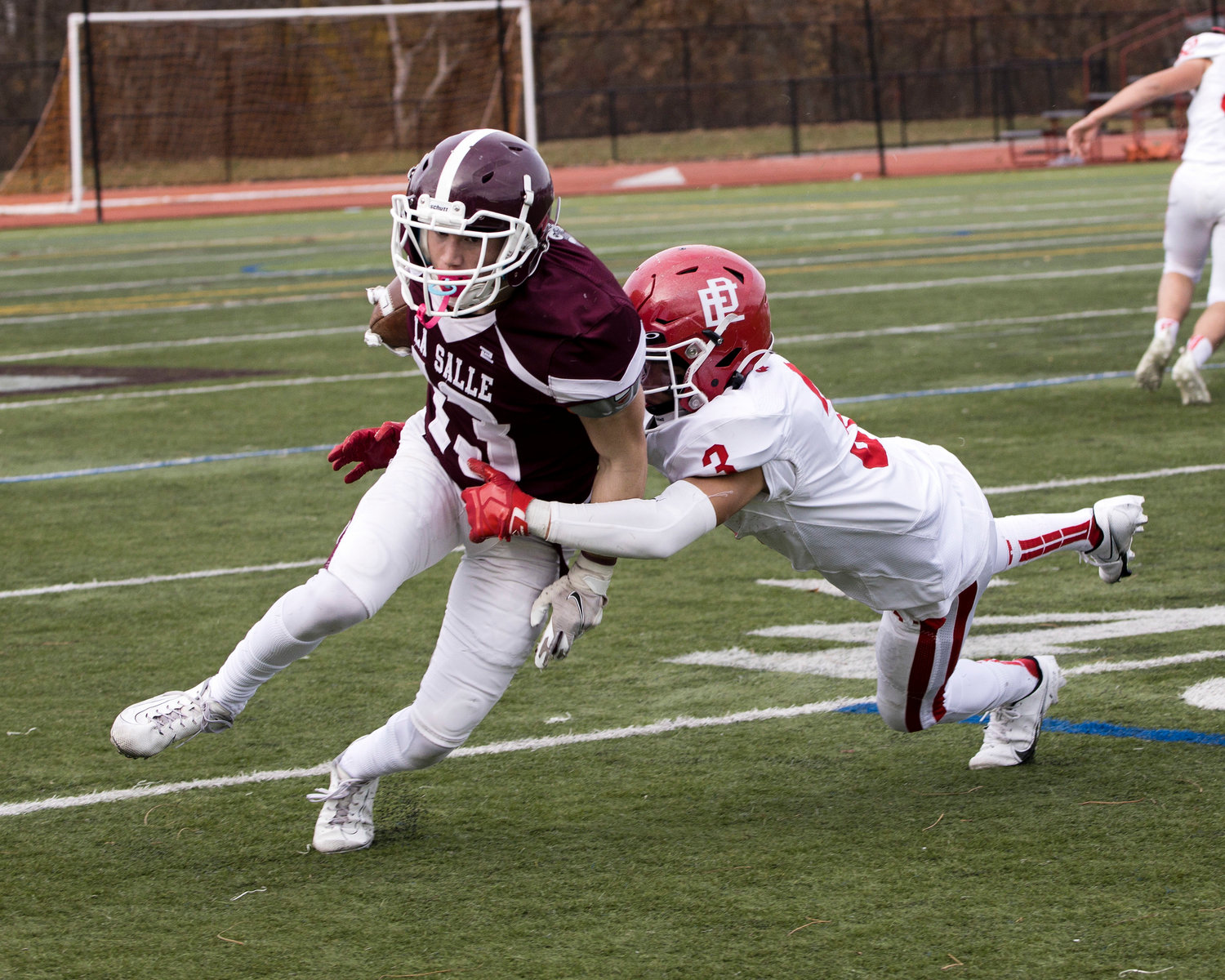 East Providence ended use of Pierce as its home base in 2020-21 term with the completion of the Townie Stadium on the new EPHS campus in time for last season. An issue with foundation of a light post and stands at the complex last this past summer, however, forced the Townies to return to Pierce for the 2022 campaign.

The meeting between East Providence and LaSalle will be their one-and-only matchup of the season, something that has happened two years in a row now. The teams used to meet just once regularly since the beginning of the holiday game back in 1929.

But it hadn’t happened before last year since 2013. In time for the following year, the Rhode Island Interscholastic League changed the playoff format for all football divisions, extending the postseason while shortening the regular season. That fall, 2014, the Townies and Rams met in September for a league contest then on Thanksgiving for a game that meant nothing in the standings.

Under the set-up, which lasted until this season, East Providence and LaSalle actually met three times once, in 2015 when the Rams took the early season league encounter by a 41-14 count, then beat the Townies 35-20 in the playoff semifinals before EPHS won on Thanksgiving Day, 41-23.

Last fall, in another switch in scheduling, the RIIL allowed LaSalle and Hendricken to take part in games outside of the league and state during the regular season. The Rams and EPHS could not agree on a date that worked for both schools and a then Division I game that counted in the standings did not take place.

“The build up isn’t the same, It had some good history to it when the games were ‘big,'" EPHS head coach Jon Stringfellow said. “But it's different now. It’s still the pride of it. And wrapping up the season with it is a good way to end it.”

The 2022 season ends this week for the Townies after the locals showed flashes of potentially once again becoming a factor among the state’s elite, though they're still not yet quite back to that lofty level.

In between, the Townies were less than impressive during a three-game losing streak versus like programs Cumberland, Cranston West and Mt. Pleasant, falling by a combined score of 99-37. And despite the final score, E.P. also played the state’s other perennial power, Hendricken, reasonably close in a 35-7 defeat.

“Portsmouth and St. Ray’s…we beat St. Ray’s and we took Portsmouth to the wire. We had some opportunities. And even Hendricken, there were some breaks during the game that if they went our way things could have been a little bit closer. So we showed we could play with them, which is good,” Stringfellow recollected.

He continued, “We need to still figure out how to get over that ‘hump.’ Like I tell the kids, we’re an inch away from being where we need to be. But every time we take a step forward, we can’t take a step back. It’s just learning it and understanding the commitment that it takes to continue to play the sport at that level. And we have a junior-heavy team coming back. We lose some key seniors, but we have the entire offensive line coming back, the receivers and (running backs) Steven Clark Jr. and Evan Johnson. So we have some good pieces coming back.”

The Townies have used the two weeks since they lose to Portsmouth in the playoffs to take some time off, regroup, get a bit healthy and watch some film. East Providence last week also held a competitive joint practice with neighboring Barrington, still under the direction of EPHS football coaching legend Sandy Gorham.

Stringfellow figured what they’ll encounter from the Rams, who have won the last three Thanksgiving Day contests, had a lot to do with how LaSalle fared in the state championship game against Hendricken Sunday afternoon, Nov. 20.

And the Rams may still be in a celebratory mood after they beat the Hawk 38-29 for the 2022 title.

The victory was especially sweet for LaSalle because of the Rams’ recent lack of success against their main football rival. Hendricken had won 11 of the previous 12 state championships, including eight of nine meetings with LaSalle in the final. The Rams’ only other win during the period was by a 22-21 score in 2017.

“They only have three days of rest between games,” Stringfellow noted. “I expect we’ll see their seniors for a while and guys that are healthy as well will be out there. I think a lot will depend on how they perform Sunday…So we’ll see how it goes. It will be interesting as always.”