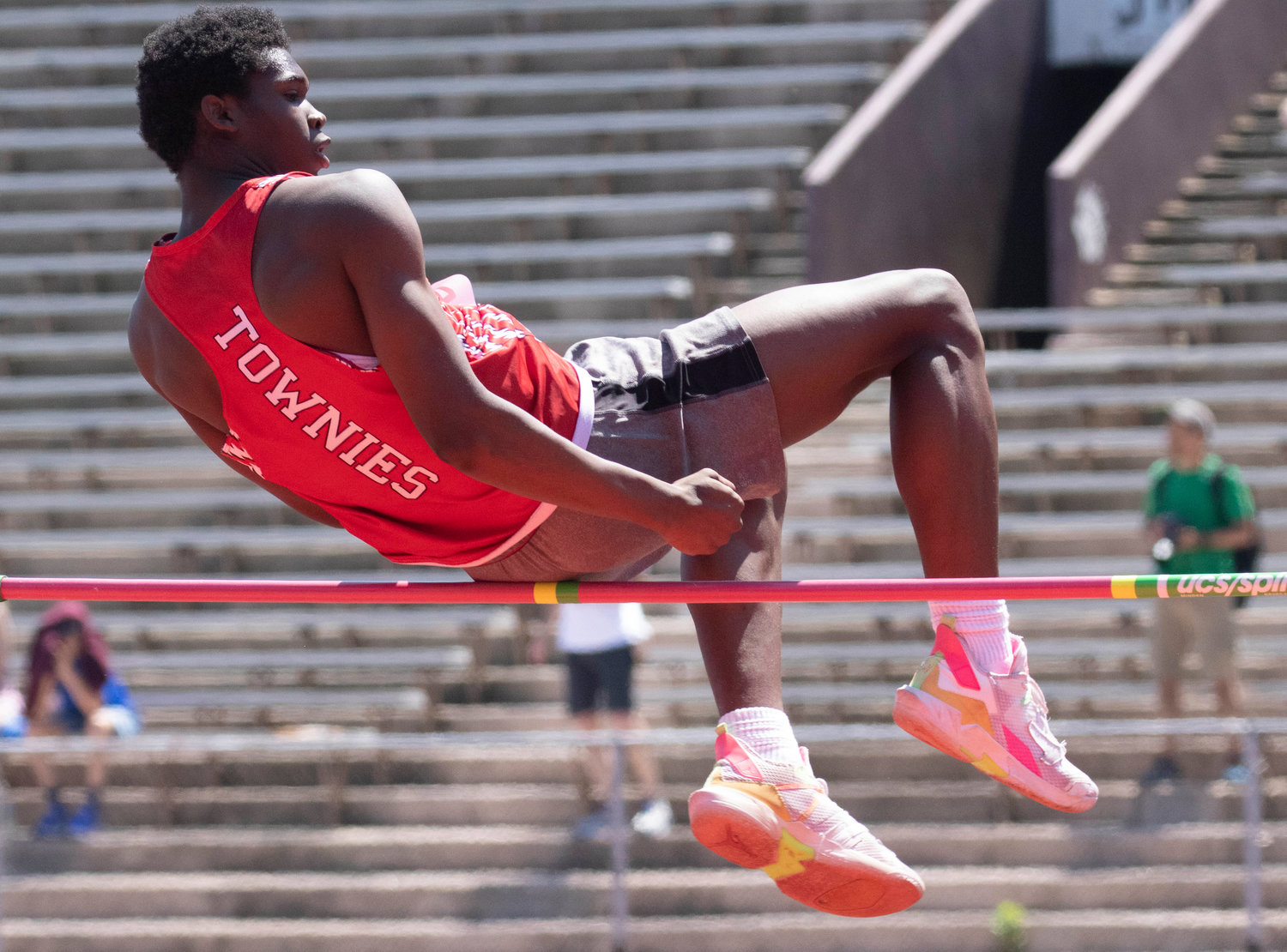 Kenaz Ochgwu vies for the Townies at states in the high jump.
Photos by Rich Dionne 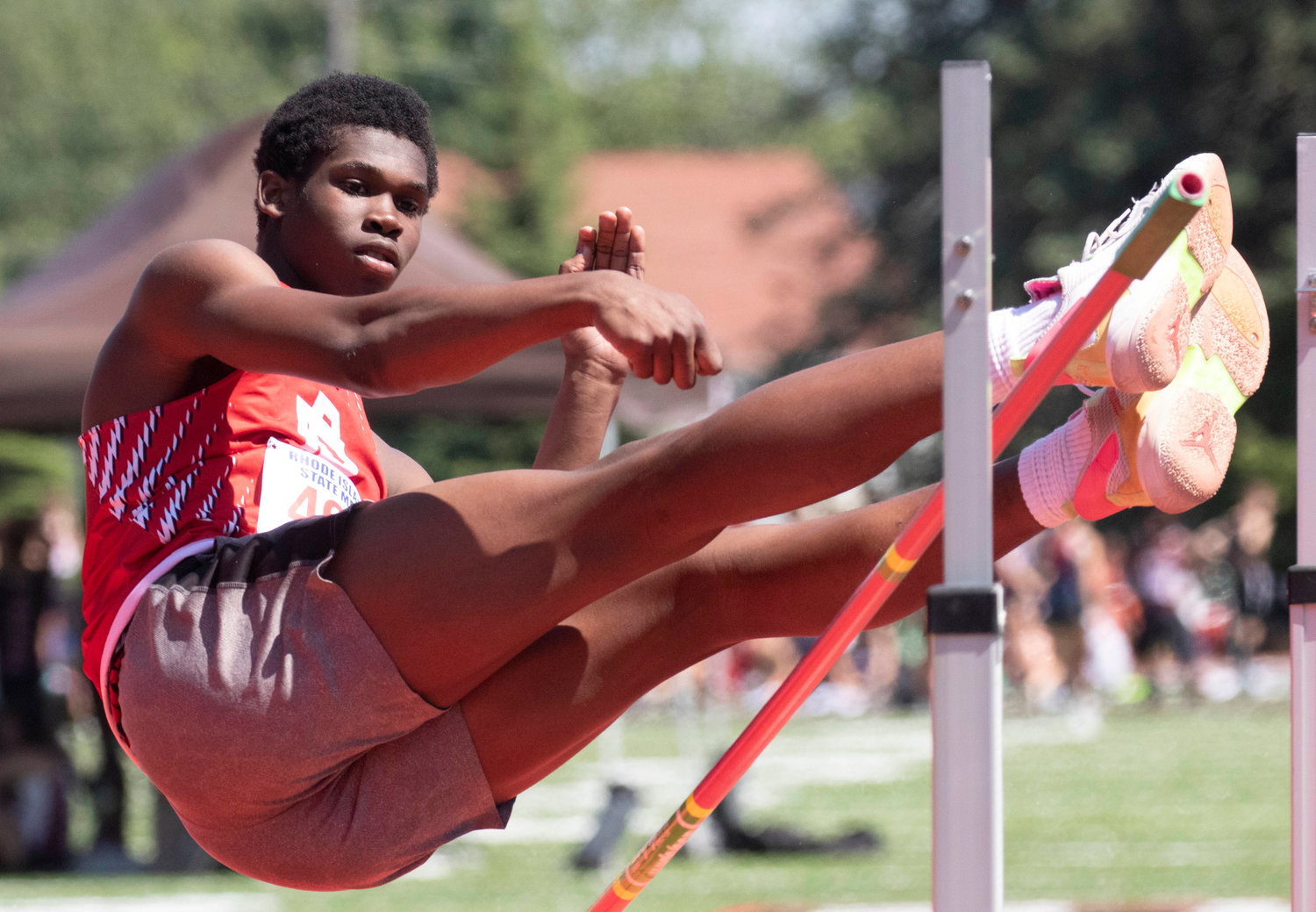 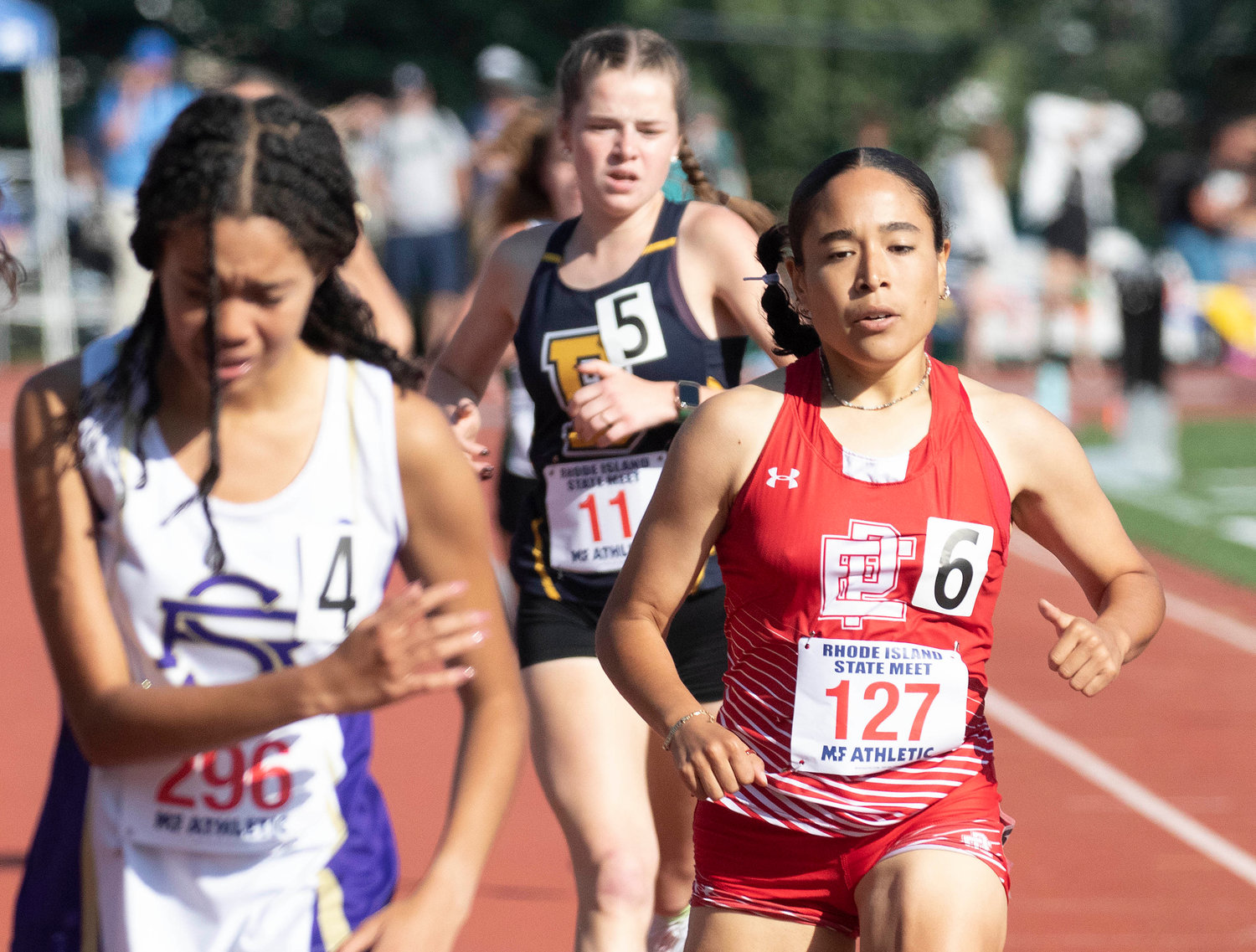 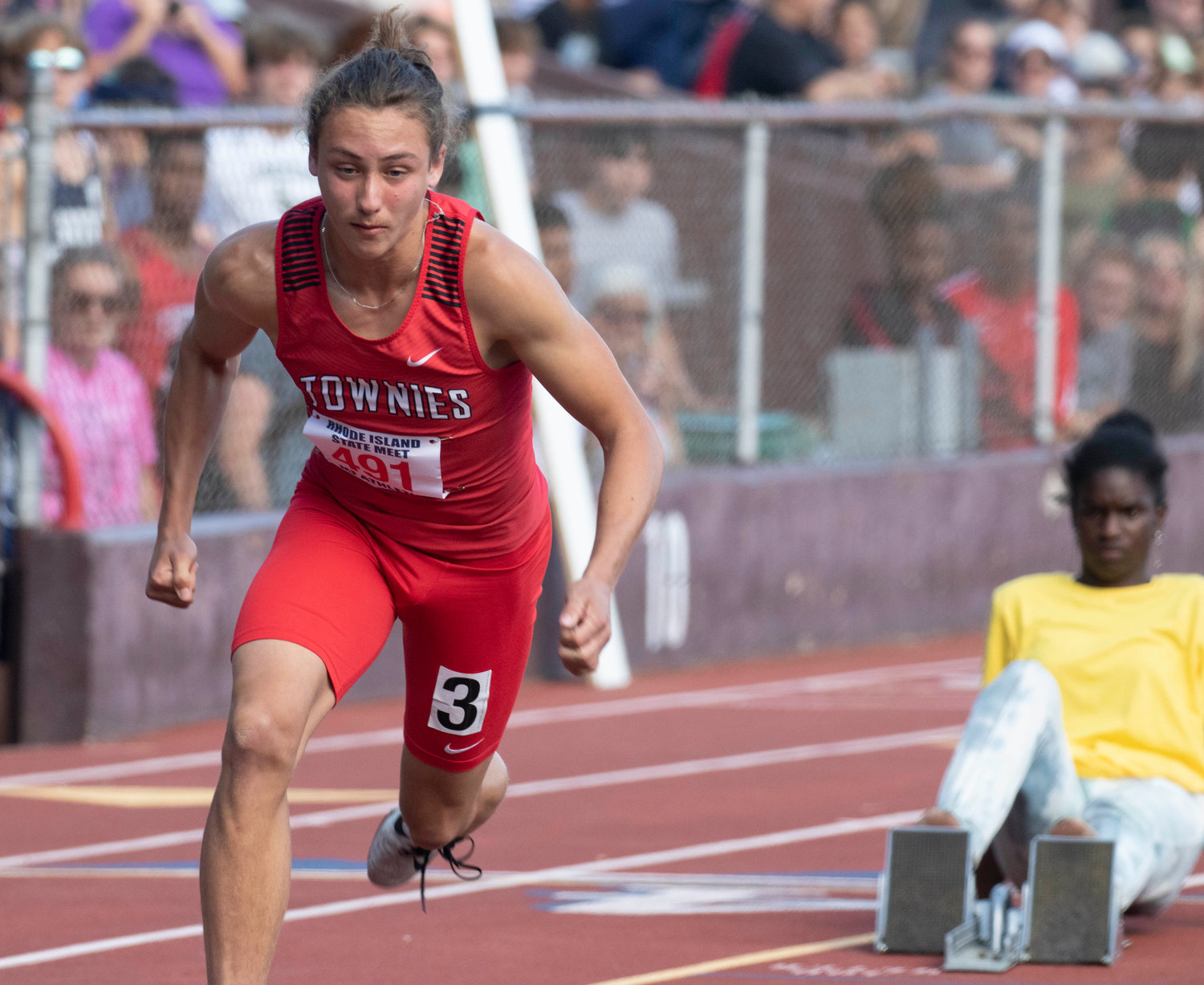 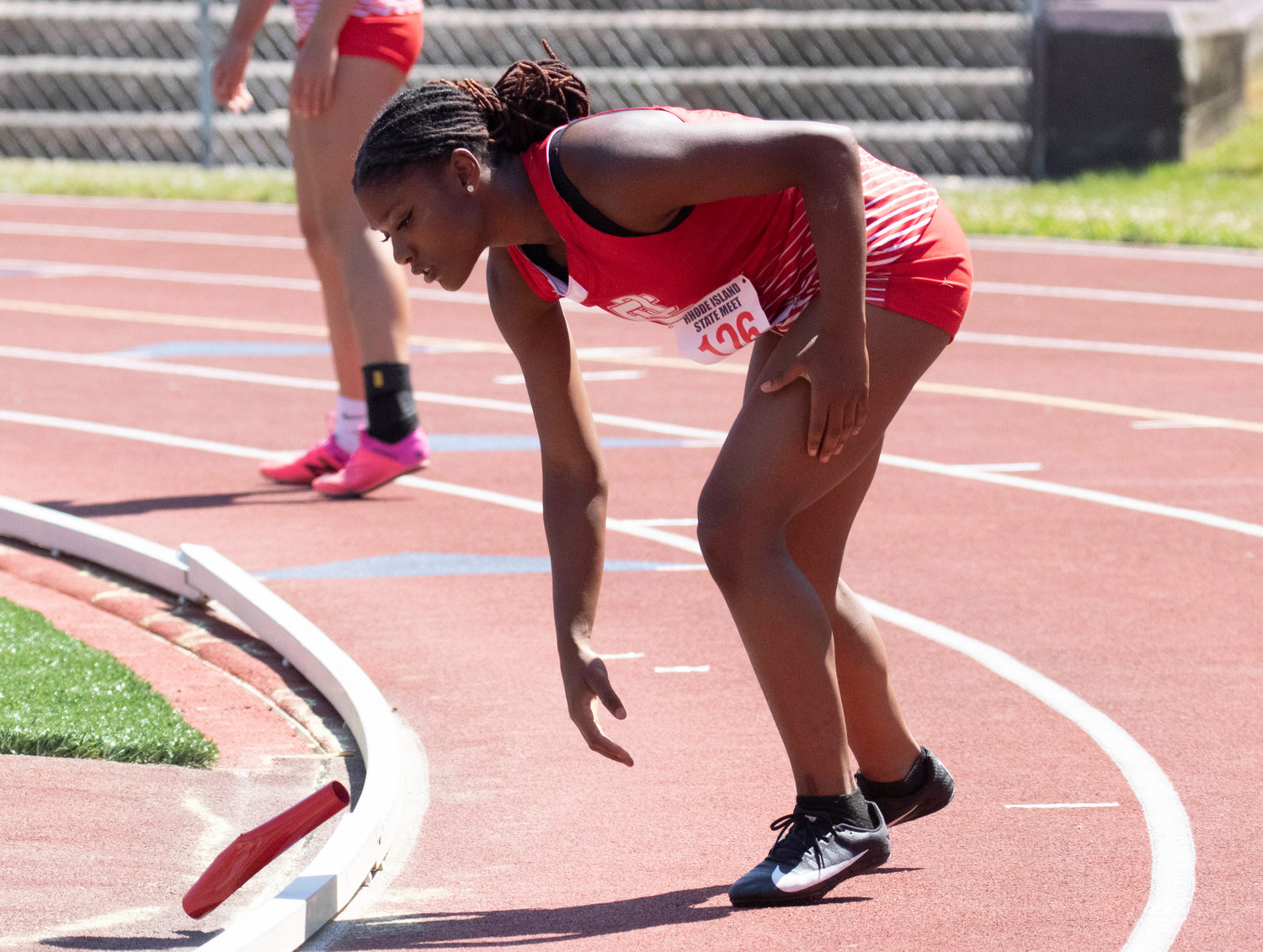 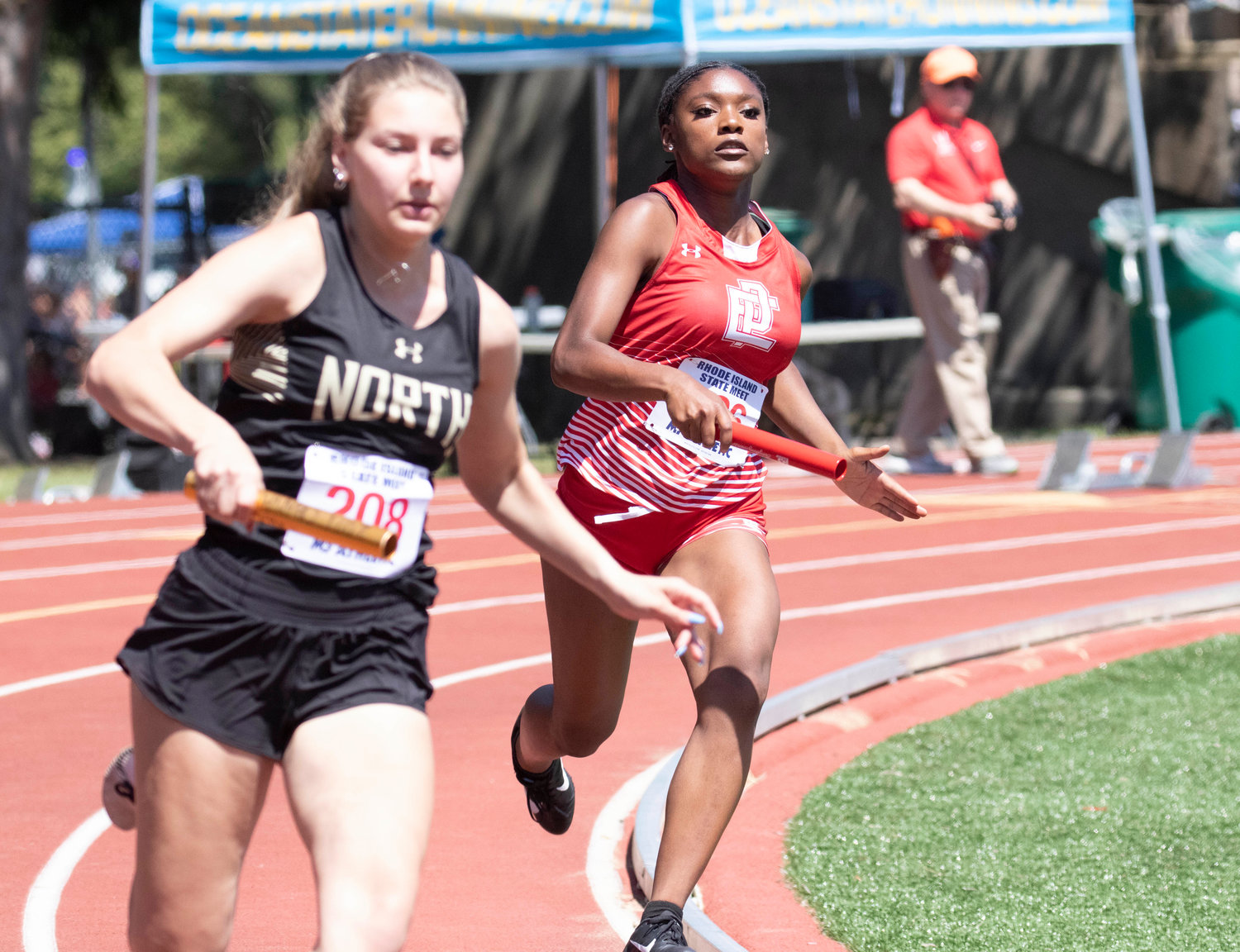 Samantha Clark runs a leg of the girls' 4x1 relay for the Townies. 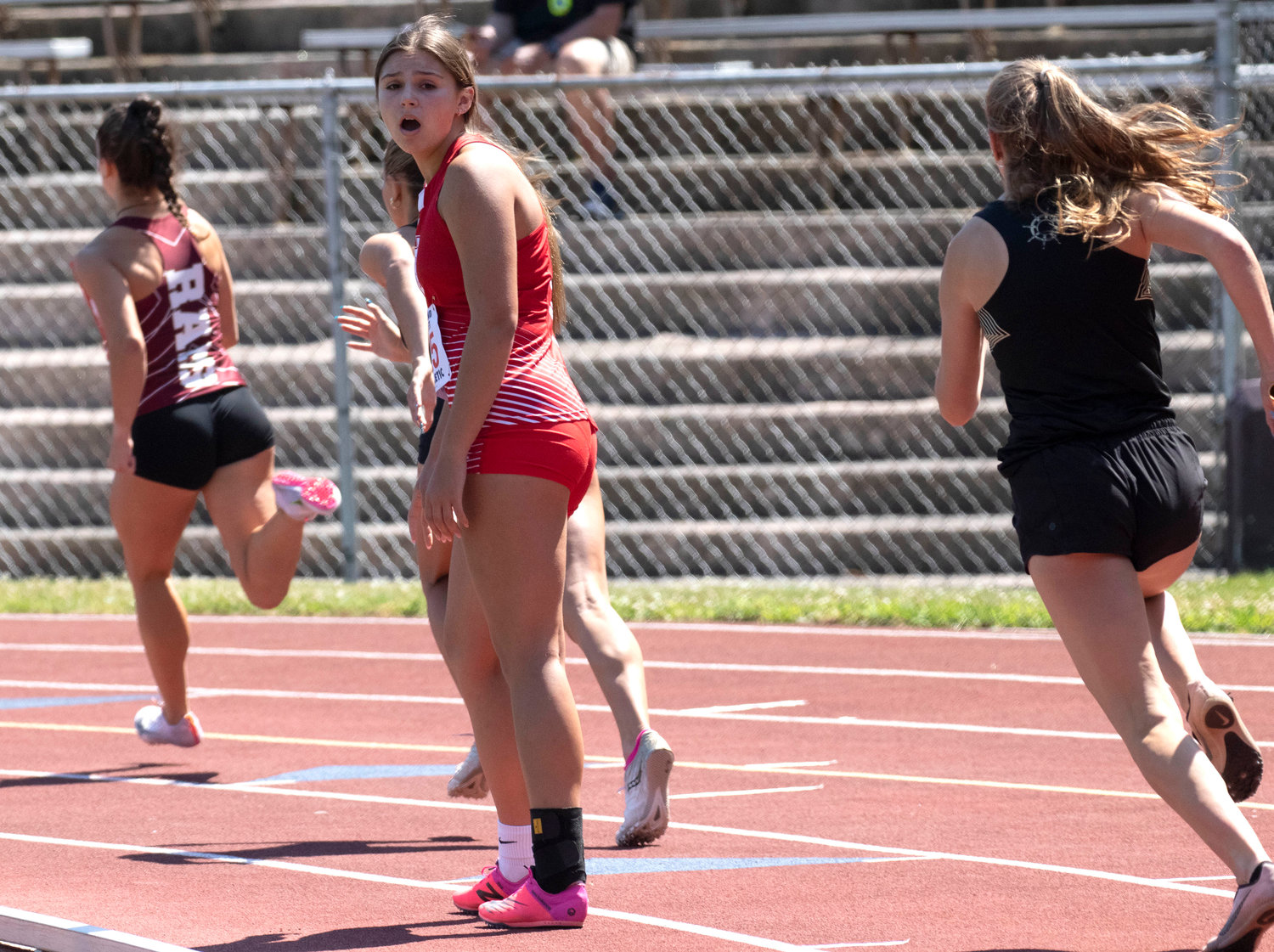 Kandace Daniel awaits for the baton for EPHS in the girls' 4x1. 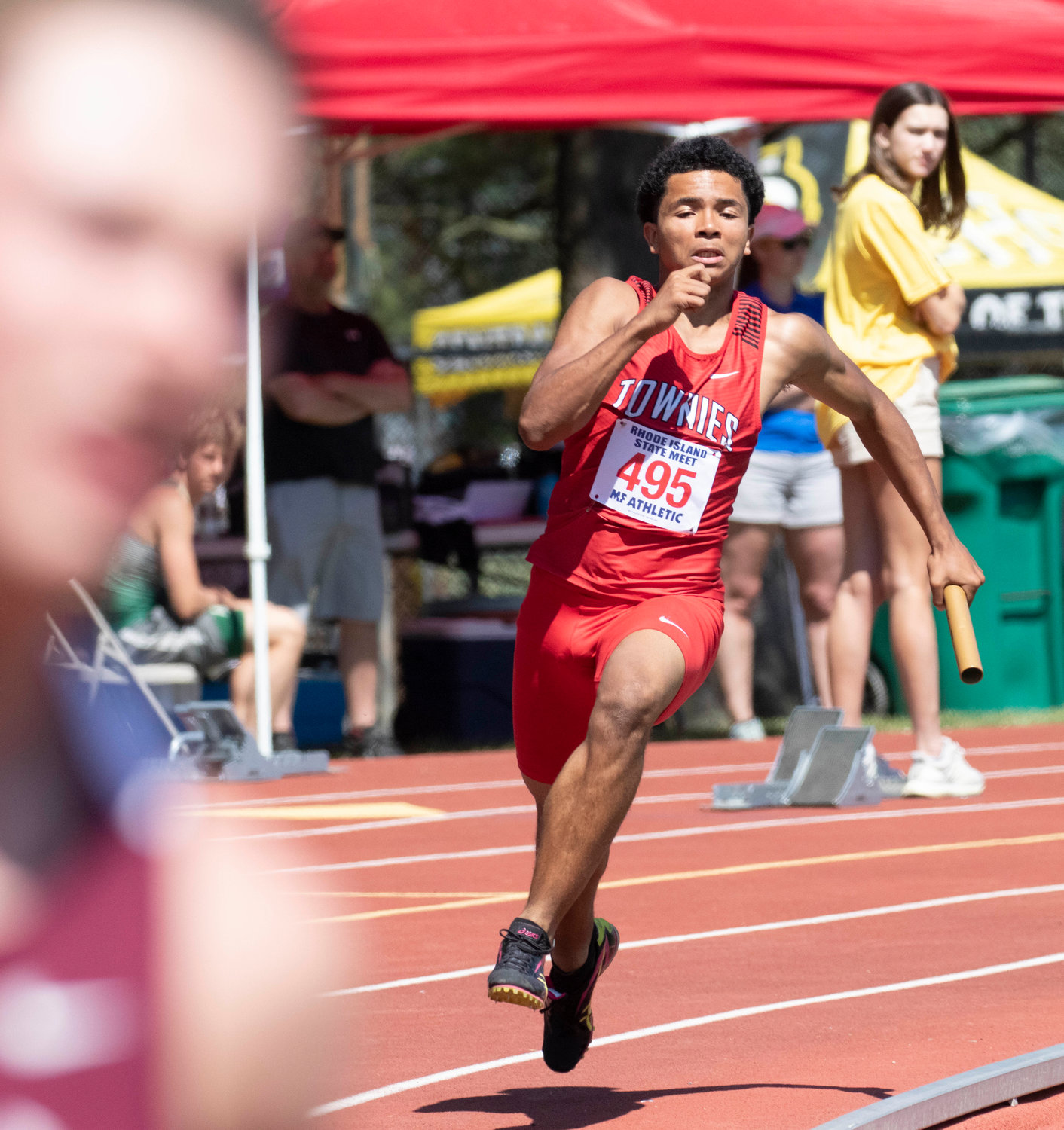 Denzy Suazo runs a leg of the boys' 4x1 relay for the Townies.
Previous Next
Posted Monday, June 6, 2022 1:37 pm
Photos by Rich Dionne

EAST PROVIDENCE — It was a difficult outing in terms of scoring for the respective local entrants into the 2022 Rhode Island State Track and Field Championships held at Brown Stadium on the East Side of Providence Saturday, June 4, as only three athletes with city ties placed among the top six in their respective events.

Overall, LaSalle Academy swept the teams titles. The Rams won their 19th boys’ championship and first since 2015 with 79 points to dethrone three-time reigning titleists Hendricken, which scored 66. St. Raphael was third with 57. On the girls’ side, LaSalle defended its state crown and captured its sixth ever state title with 91 points. Classical was second with 74 and Cranston West third with 71.

Girls’ notes
Miller and Sam each scored four points for their respective fourth place finishes giving Bay View eight points total and in a share of 20th place with three other schools.

Sam threw her best of 34 feet, 7 inches on her second attempt in the shot put. Alyssa Yankee a junior from Cumberland was the winner with a best of 38’9” to edge Weeko Thompson of Chariho who was second with a 38’7.75.” Teresa Andruzzi of LaSalle was third with a 34’7.5.”

The EPHS girls failed to score a point at states, through freshman standout Nazarae Phillip came very close to doing so, but nudged out of the sixth and final position by four/1,000ths of a second. Phillip settled for seventh in the 200 meters with a time of 26.135 with LaSalle’s Christian Cormier in sixth at 26.131. Cranston West’s Ailani Sutherland won the event in 25.31. Townies’ sophomore Kandace Daniel was off the pace with a time of 27.01.

Boys notes
For Morrison, his senior season ended with his sixth-place run of 51.56 in the boys’ 400 meters, earning the lone point for the Townies on the day. Seniors took five of the top six spots, including the winner from Mt. Pleasant, Denzel Young, who clocked a 50.74.

“I’ve never had a kid who has worked so hard over his career to come out of nowhere and become such a good performer as Nick,” EPHS head coach Bob Lyons said of Morrison, who, like all other top six finishers at states, qualified for the 75th Annual New England Interscholastic Outdoor Track & Field Championships Saturday, June 11, at Willow Brook Park in New Britain, Conn.

Ruddock was well off the pace individually in the dash, clocking an 11.44. LaSalle’s Jared Gibbons won the event in 10.85. Also, Kenaz Ochgwu cleared 5’8” in the high jump for the Townies, missing out on the top six, which came at 6 even. Marquis Buchanan of Classical won the event at 6’4.”

Freshmen states
At the boys’ freshmen state championship meet held at Portsmouth High School on May 25, Machar Francis accounted for all of the EPHS points with his performance on the field in the discus.

Francis’ best effort on the day carried 93 feet, 10 inches, good enough for a fourth-place finish and earning the accompanying four points. Kayden Thomas of Rogers won the javelin with a throw of 114’5.” James Gemma of East Greenwich was the runner-up with a 106’6” and Owen Spira of Exeter-West Greenwich in third with a 97’11.” Of note as well, the Townies’ Peter Caron was 10th with a throw of 86’8” or 3’5” out of the sixth-and-last scoring place (92’1”).

Francis also finished just outside the top six point positions in the shot put with his throw of 31’6.5,” which wound up eighth. The sixth-place throw covered 33’8.25.” The aforementioned Thomas won the event with a 38’8.75. Bishop Hendricken’s Alex Arnold was second with a 37’1” and Pilgrim’s Brandon Wolfenden was third with a 35’11.5.”

The Townies’ top performance on the track came in the 110-meter hurdles. Barrington’s Bobby Wind won the event in 16.22 seconds followed by a pair of Bishop Hendricken runners Nae'shaun Montgomery (17.10) and Tristan Jordan (18.34). East Providence’s David Vieira clocked a 20.37 to place eighth, a second off the last scoring position and sixth-place time of 19.36.